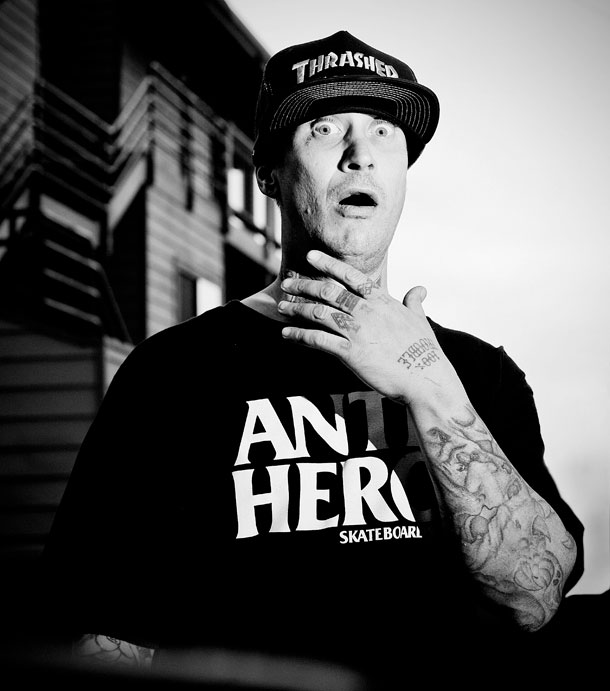 Why were you in prison?
For stealing and for drugs. I was a heroin addict. Pelican Bay. One of the gnarliest prisons in the US.
It’s not SuperMax though.
Yeah it is. It’s gnarlier than Corcoran, all those. Even though San Quentin’s got Death Row, that’s nothing. The gnarliest dudes in the US go to Pelican Bay.

What made you decide to stop skating and start doing junk?
I just got caught up. I got injured and started shooting heroin, and it took over. That high was such a great feeling that it took over.

Let me run through your sponsor history. You got kicked off Santa Cruz.
Kendall and Denike wanted me to be a street skater. They put me in a little office and told me I had to dress a certain way and have an all street skating video part. And then a week later they ended up kicking me off over the phone. Then I went to Focus. Christian Hosoi asked me to ride for him.

That must have been an honor.
Definitely. Christian Hosoi is the gnarliest.

Then Christian crashed out.
Crashed hard. And then it was Consolidated. Jason Jessee and the Paez brothers; that’s why I wanted to ride for ’em. And then they found out I was hanging out with Julien and Cardiel and all you guys—I was bound to quit Consolidated anyway. Anti-Hero was a better fit for me.
What was the best trip you ever went on with the boys?
Come on—you know that one. Australia. We’ve been on so many Hell Rides, but Australia was a great one. Drink fight and fuck. Rumble in the streets. That dude knocked you out—I was like, “Un-uh. I ain’t havin’ that.” So I creeped up behind him and popped him in his ears. And it was chaos from there on. Hell Ride cartel forever.

And then you got kicked off Anti-Hero? What happened?
That’s when I started getting strung out. I hurt my foot skating the ramp at that Graphix warehouse. I was hanging out in Santa Cruz with some of my buddies, and they said, “Try this.” I was like, “Alright, my foot hurts, but this feels great.” Next thing you know, I’m hooked. And then I’m flaking out on travelling. I was embarrassed, because I’m feeling fucked up, in the gutter. 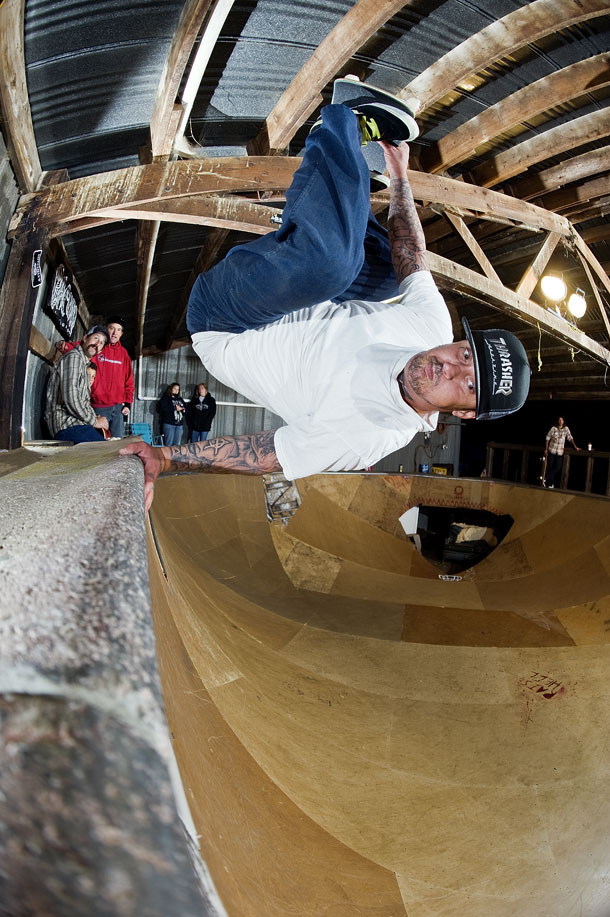 
What was your nickname in jail?
Spider.
You did a year?
Two years. This was my first Halloween, Thanksgiving, Christmas, and New Years all together in six years. Every October I get arrested.
What’d you get for Christmas?
My freedom. Skateboarding.
Are you happy to be back on board?
Fuck yeah. Believe that. You can’t get rid of me now.

I know I could never get rid of you Andy. Remember where we first met?
Kennedy warehouse?

Glory Hole.
That’s right! I have a question. I read an interview with…Lizard King? What’s up, fool? You heckled that dude. See, that’s why I want to get back out there. To show these guys the rawness of skateboarding.
Skateboarding ain’t about good things. It’s about bad things.
Exactly. Exactly.
What happened in Vegas?
When I bought the brass knuckles? We saw Slayer and DI two days in a row. I saw this guy selling some brass knuckles. I was like, “Come on Jake, give me some money. Give me some money.” I went straight to the pit, and next thing you know I’m getting carried out on a stretcher. Paramedics had to come pick me up.

I do remember that. It was me, you, Ruben, and Joey. Rasta Joe.
Oh man. Bob Gnarly. Wow. I just saw him the other day in Ripon. I was like, “Is that hair in your hat?”

So you’re out now, and you’re doing skateboard lessons?
I give skateboard lessons. I got married to my wife, Erin Roy. I’ve been skating with Wade everyday, or every other day. As much as he can skate, I’ll go skate with him. He’s gotta work too.

Who do you get boards from?
Anti-Hero. From Julien and Jim Thiebaud. I want back on the team. If I gotta fight everybody to get back on, I’m ready. Let me earn it. I got Anti-Hero pride. Those are the dudes I wanna be around.

I just got back from Brazil and I saw a kid who skates just like Bob.
Bob’s 100 sponsors, it doesn’t matter. He’s still gnarly.
He does 20-foot frontside ollies.
How can you fuck with that?

You can’t fuck with that. He skates for Right Guard though.
At least he smells good.

Tell me a good Alan Petersen story.
There was the time in Wisconsin, when little Richard Paez and Karma were hiding in the van while Alan snuck a girl in there, tryin’ to get some, telling her he’ll get her some pink Pumas. He got her pants off and little Richard and Karma start laughing. She freaks out, and Alan loses it because he ain’t gonna get some. “This could have been the one! This could have been the one!” He hucks a bottle at Karma, Karma ducks, and Alan’s all, “I’m outta here. I’m leaving this tour.” So I said, “Alright, can I have your skateboard?” That was 30 bucks, a case of beer right there. Later, Alan. But he got to the corner and decided he didn’t know where the fuck he was and came back.

What do you miss the most about the old days?
The travelling was the best, Jake. We destroyed everything that got in our way. Rip ride.

No doubt about that. Do you think the kids know what that means now?
No. Skating’s so soft now. Kids only skate if they got a camera. I’m glad we had the time when we did. There’s nothin’ better than when we had it. These guys making their money and dressing nice, that don’t even compare to the rip riding we did, sleeping in our sleeping bags at the skatepark, drinking beer, BBQing—there’s no money that could equal that.
What’s your advice for all the little kids out there who skate but might be getting into some weird shit?
If you wanna play, you’re gonna have to pay. And believe me, those dudes in prison are no joke. There’s stabbin’ and stickin’ and all that. So if you’re ready to get high and have fun and think it’s a good old time, wait ’til you get locked up, ’cause that’s where the big boys are. I’m tellin’ you. I’ve seen people get stabbed over 20-cent Top Ramen. Dude borrowed one, didn’t pay it back on time, and got stabbed. In the stomach. Witnessed it.

How many guys are on the hit list now?
We had… We had Kendall, Jason Adams—I took care of him. He’s nothing now. He’s just a little redneck wannabe Johnny Cash dude. He’s done with. Flatliner. We got Sheckler, Dyrdek—that Lizard King kinda bugs me. There’s a bunch of phonies out there. I’ve been doin’ my homework, reading through these magazines, and I’m gonna start writing them down. Deciding who needs to get knocked out. I got to. Skating means too much to me. I got 30 days left of parole and then I’m done.