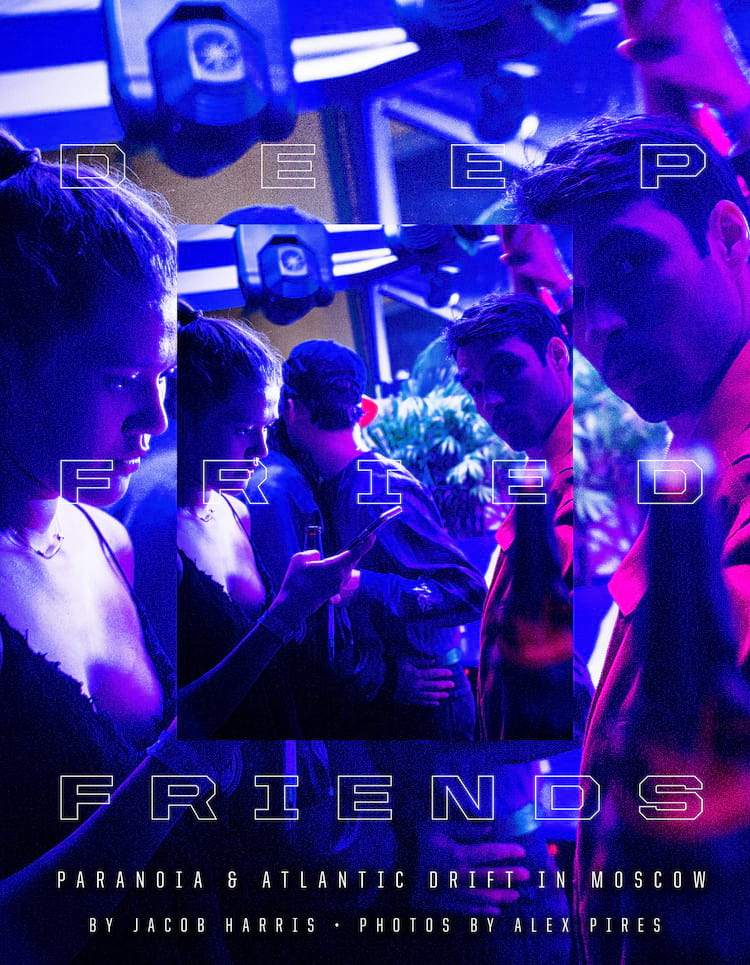 I’m finding it hard to think about Russia without considering the preconceptions a North American reader might have about the place. It would be good to challenge these myths and stereotypes because they are obviously not true, but actually it’s way more fun to just play loose with the truth and tell you about some paranoid experiences I might have had whilst in Moscow.

The weather forecast here is exactly as useful as a pint underwater. Does anybody pay attention to those symbols anymore? Constant restless weather unsettling the brain. 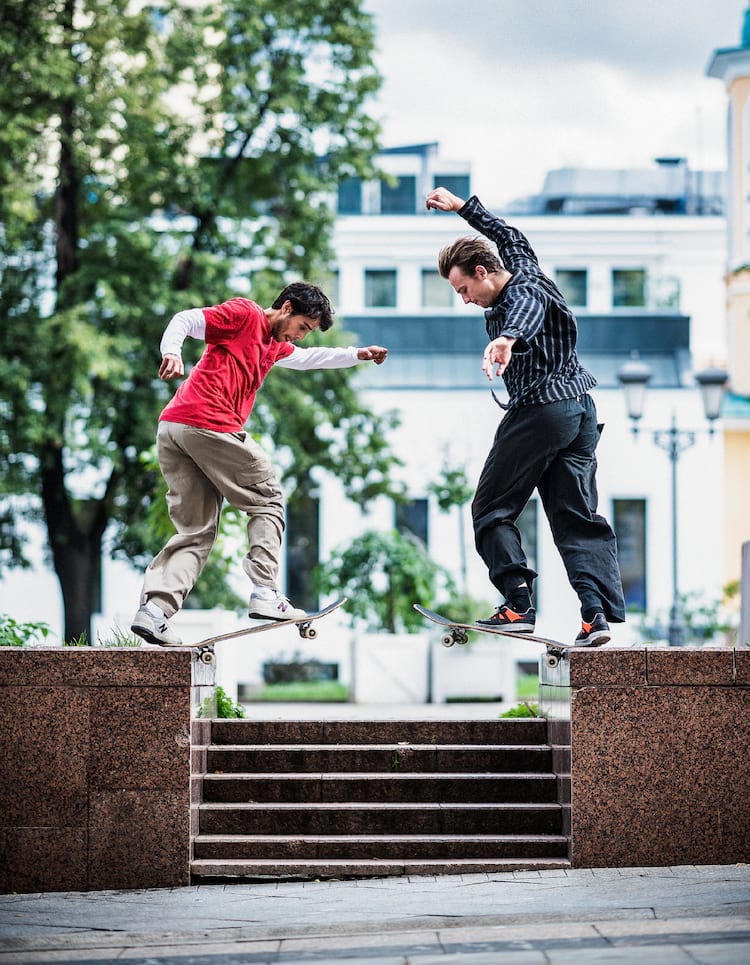 Tom Knox and Mike Arnold, cute back tails on a skate date. If you cover up their boards it looks like they’re dancing with each other or fencing 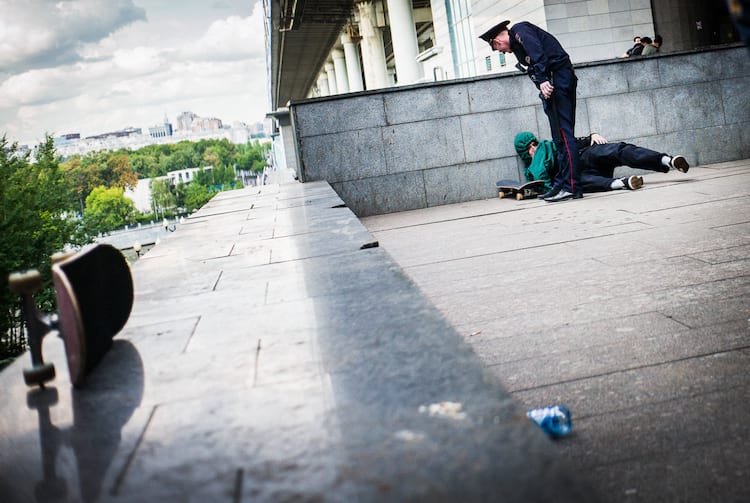 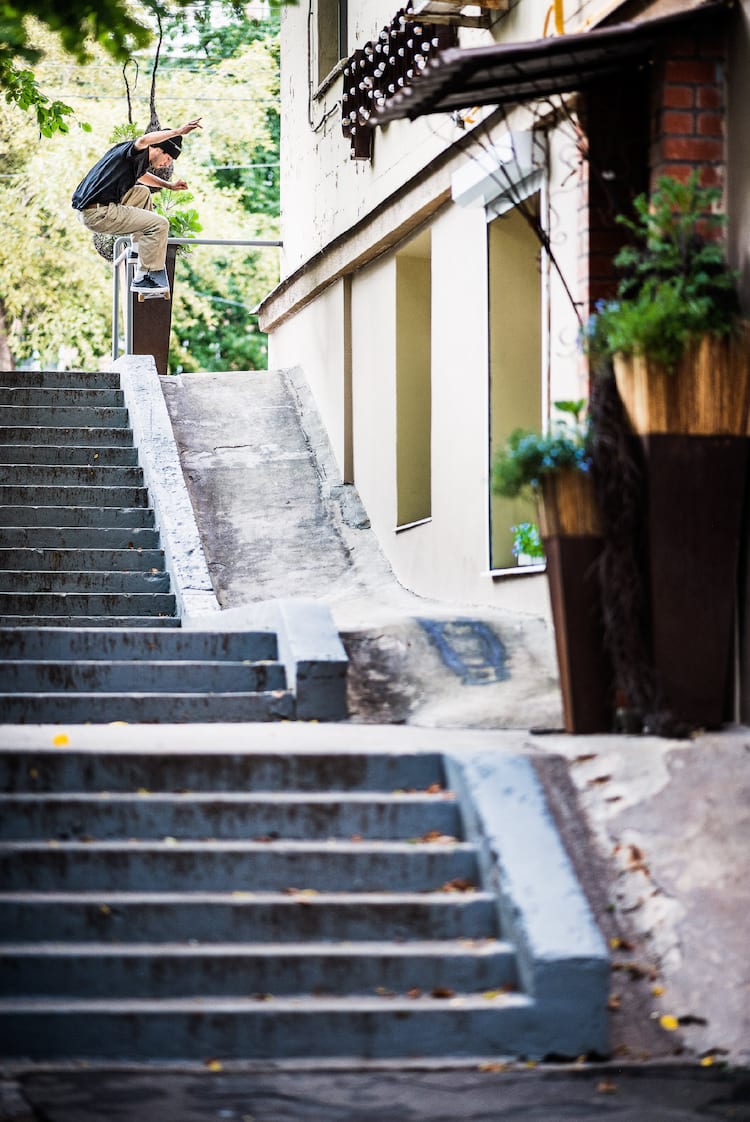 This spot was an actual Russian roulette—there’s a door just behind the plant that people kept opening outwards without warning. There was nothing that could be done about it—except maybe die. Rémy Taveira, fakie ollie 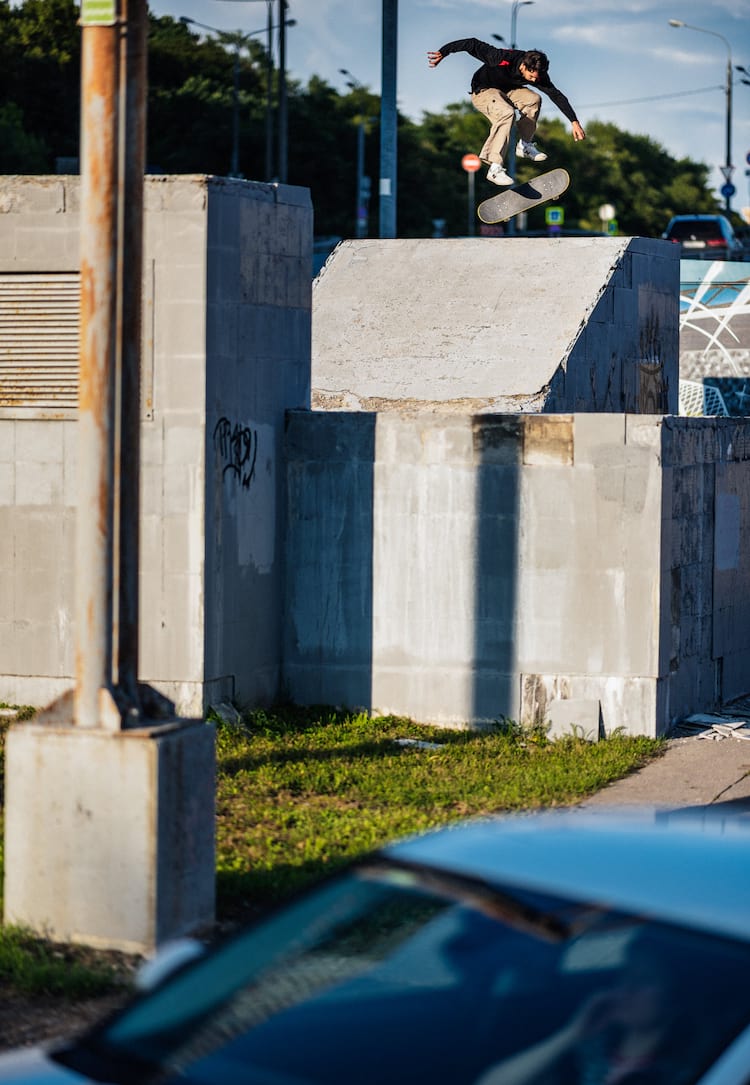 Tré flip then manual off the roof? Got to be Tom Knox

We are walking through a train station. A young police officer goes straight to Sylvain and needs to see his ID. The facial recognition system in the closed-circuit television has flagged him as a wanted criminal. It is the turn of the century and the technology is still funny to the police. It’s not that serious at the moment—he laughs, shows us a comparison of the image the cameras captured and the photo of the wanted man. The likeness is uncanny. Sylvain is compact and muscular; he has a calmness that could belie any sort of checkered past. He has moved cities more than anybody I know—Lyon, Berlin, London, Paris. What are you running from, Tognelli? What do you ever really know about your friends for sure? They let him go after seeing his passport. 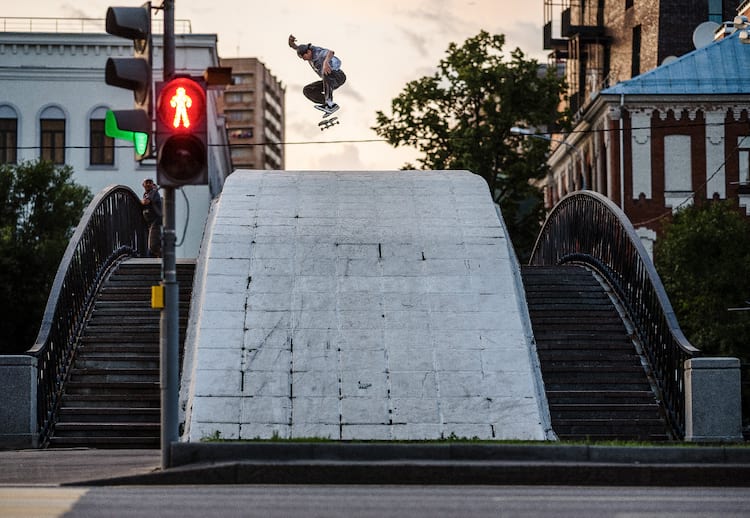 Nik Stain, kickflip into the actual bridge where I met my true love. Just look how majestic he is. Nik does not listen to the red man because the red man is for neeks 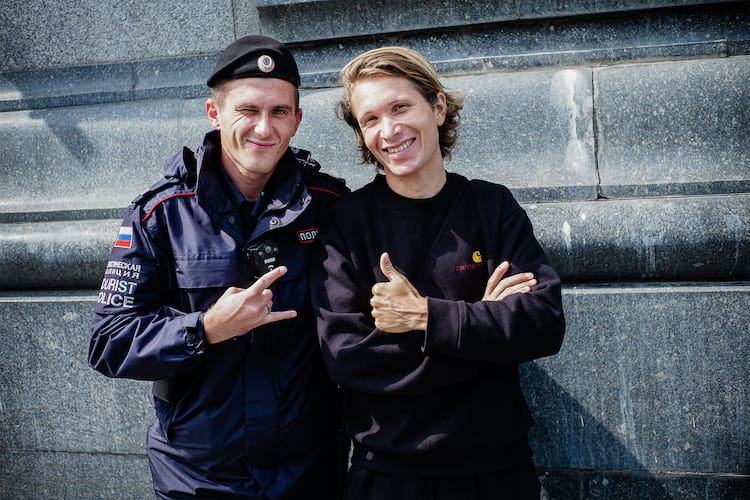 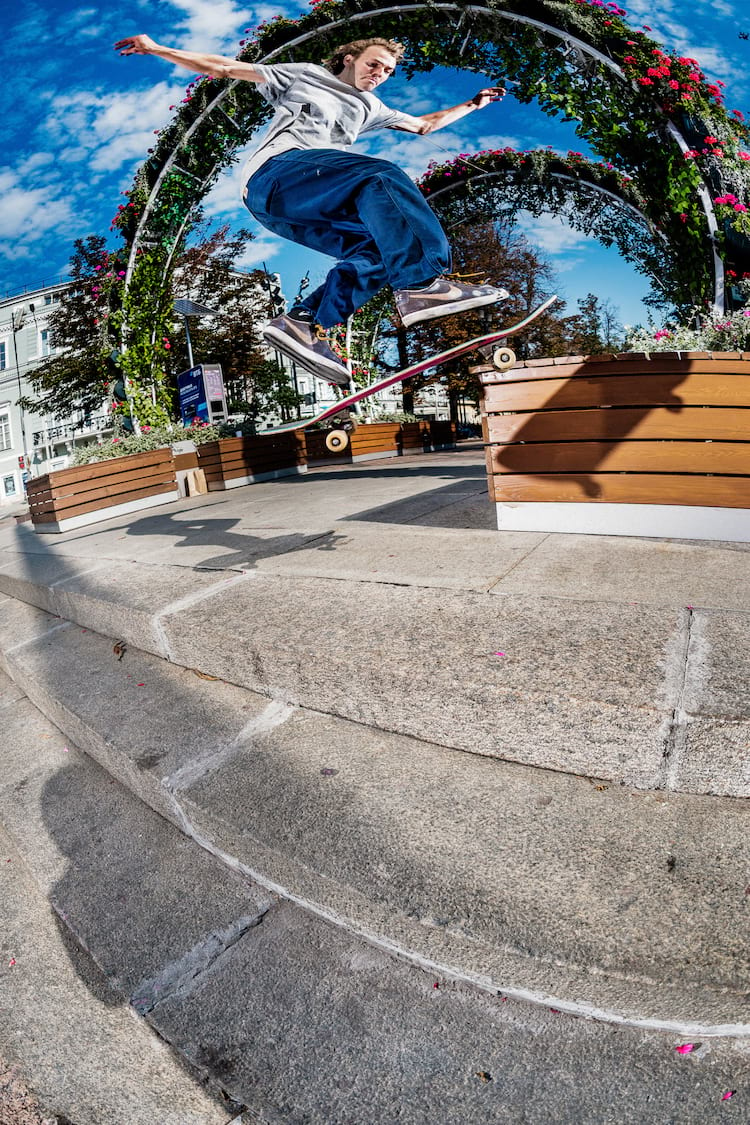 Sometimes Max Palmer skates all day and only eats a banana and doesn’t even talk about it. Front board shove it

Every morning we eat at different branches of a chain restaurant, the name of which translates to “Daily Bread.” There are many locations all over the city and we come in waves each morning. Murmurings circulate between different branches of Daily Bread. We are talked about by the staff. If you ever think you might be inconspicuous in a foreign country, you are not. I don’t know if they have some front-of-house staff WhatsApp across the whole city or something, but they talk about us in Russian and laugh when we come in. We walk into a new branch and they immediately recognize us. One girl stares and giggles at us so often I feel compelled to ask her, “What’s funny?” but she physically cowers behind the phrase “I don’t speak English” and disappears. Have they been sharing photos of us? Nik Stain talks to some of them in Russian occasionally and doesn’t get much out of them. 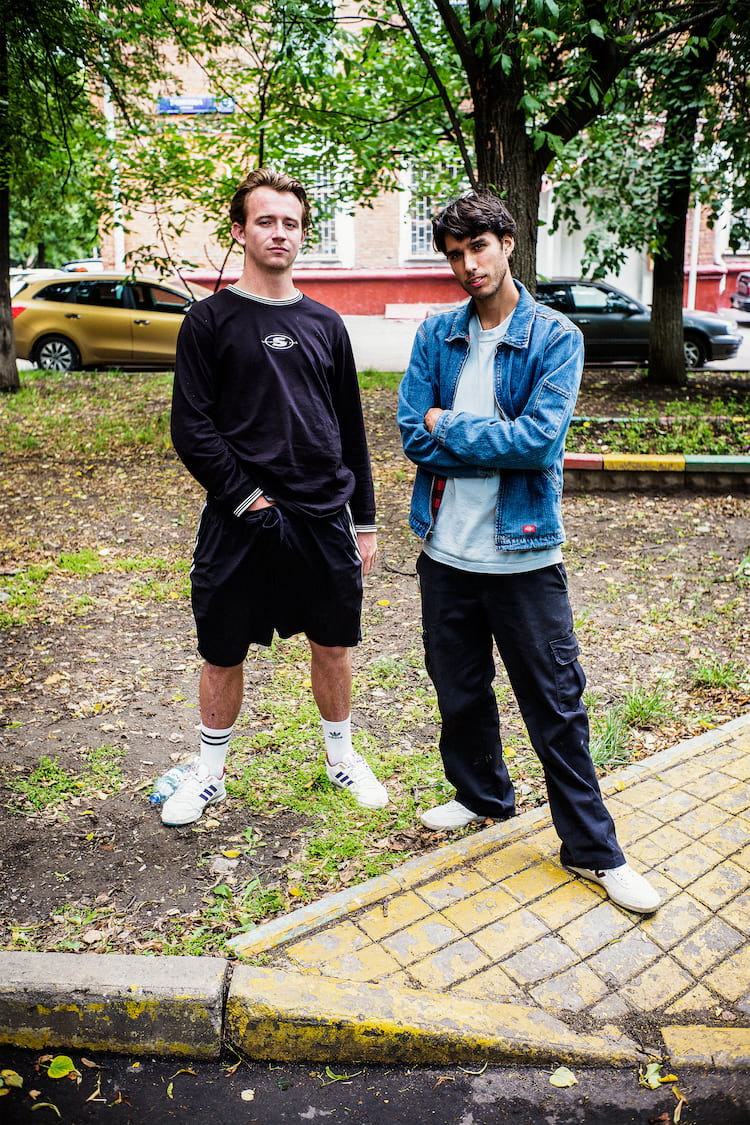 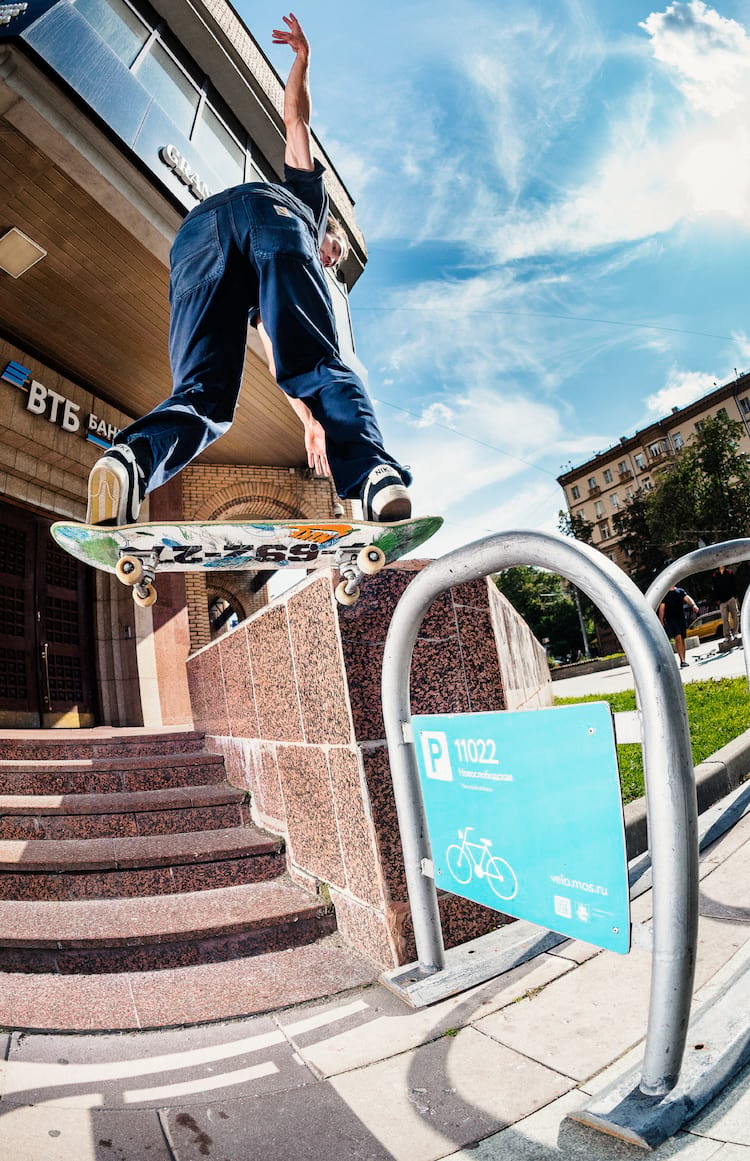 Max, front nose to front nose. At some point he was banned from getting more footage 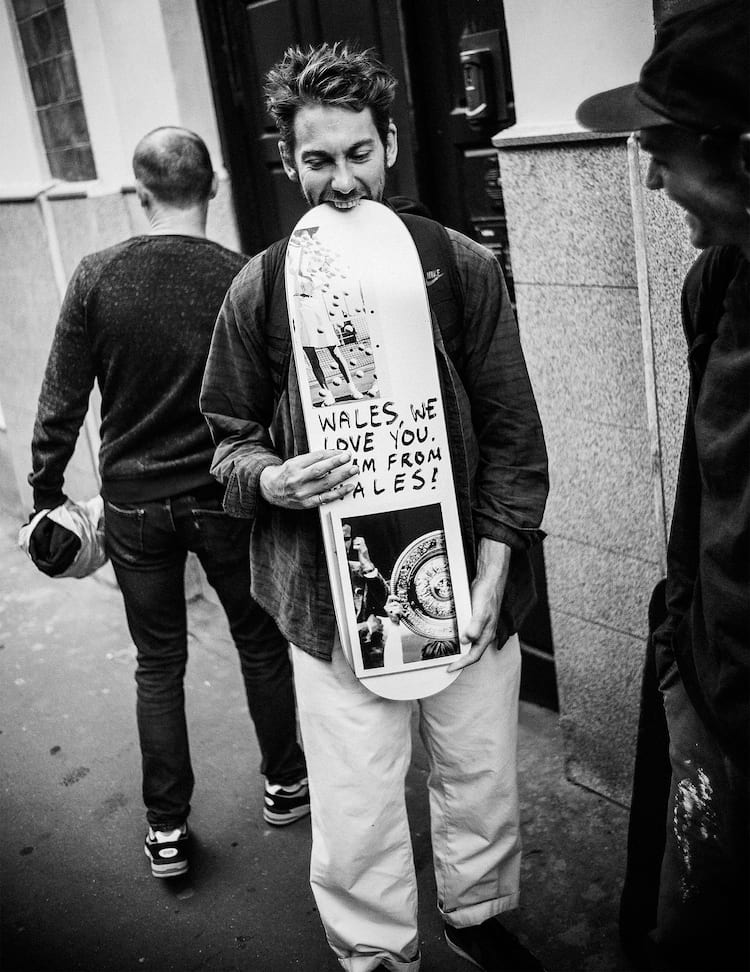 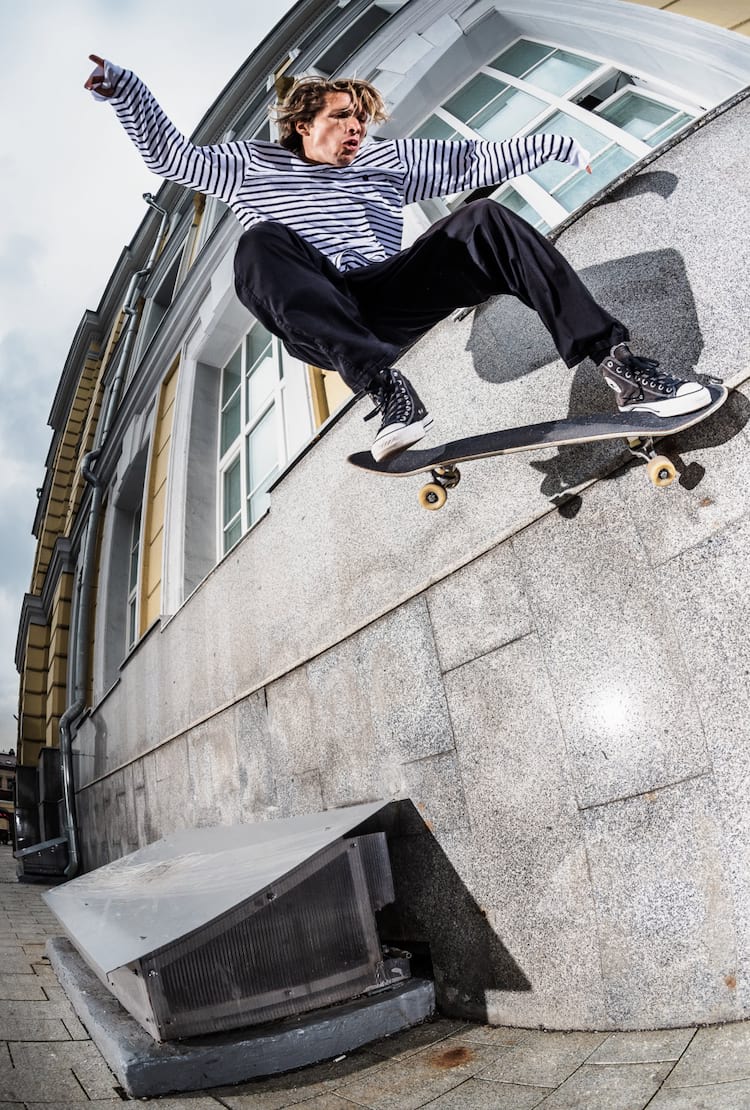 Sylvain, ollie up to crooked grind. We believe you’re French, mate, you don’t have to wear the jumper

There is a police car parked on our street every morning. Definitely nothing to be alarmed about. A good paranoia film will show just how easy it is to spiral into a total breakdown once you begin noticing details; how easily the line between astute observation and fantasy can blur. Has anybody read the story of Michi Mackrodt’s encounter with a CIA agent in Chicago? Google “Michi Mackrodt CIA agent.” Shit’s very real sometimes. This was maybe not so serious. 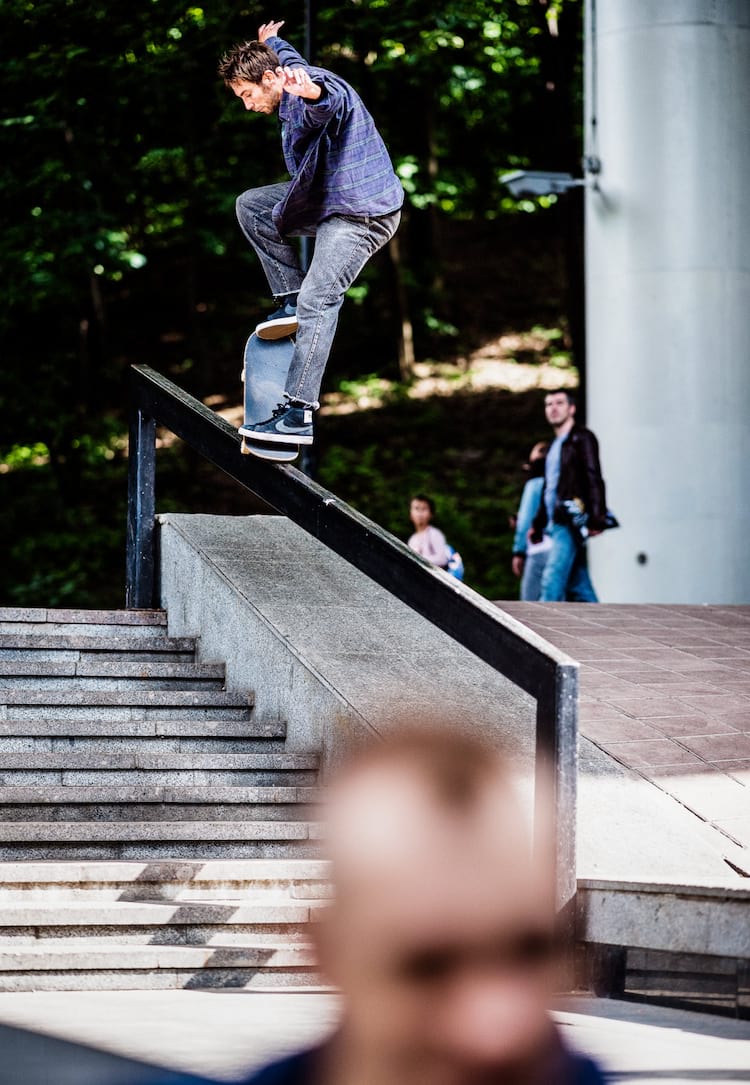 Ride up the bank, 50-50 to fakie back into the bank—Chris Jones is not actually at a skatepark

Near the end of the fortnight, me and Mike had what we thought was a joint hallucination. There is a club that Max went to, like, 400 times while we were there. I don’t really remember if it was a good idea, but it seemed to have captured our imagination. It was called Deep Fried Friends and I guess it must have inspired us to be smart; every morning I felt like I’d been beaten up by a beer and spat out by an ashtray and I think this went for mostly everybody. Anyway, after one of these nights I came home and woke Mike up. For whatever reason we sat up drinking rum until 5 AM, misunderstanding each other. When Rémy rang the buzzer, we went to find Chris Jones face down on the carpeted lobby floor in just his boxers. He had chosen to sleep there, he said. Very few hours sleep later, a delirious me and Mike are staring down from the 6th-floor apartment at what looks like a living mannequin. She just stood there swaying so gently, like an apparition, covered in pigeons. We couldn’t see her face—tree branches, leaves, pigeons, things just conspired to get in the way every time she turned. She was clearly beautiful, we could feel that, but the logic of this dream state just wouldn’t let us see her features. Mike went down to try and film this spectacle on his phone. He rolled by and just as he passed she turned the other way. No face. I wish you could see this video, I really do. I’ll put it on the AD Instagram, I guess. It crystallized and reinforced the unreality that dominated the trip.

Something there cooked us more than a lot of other trips have. Trying to put strangeness into words is kind of hard, but when I got the incidental photos in my inbox and saw that Alex Pires had somehow managed to shoot a photo of this apparition I wasn’t even shocked, though he hadn’t mentioned it. Tomorrow we are going back to Moscow to get Kyron and Jensen in the edit. I am going to try to find this pigeon woman and film her on my Bolex and you will see it if you watch the edit, I hope. 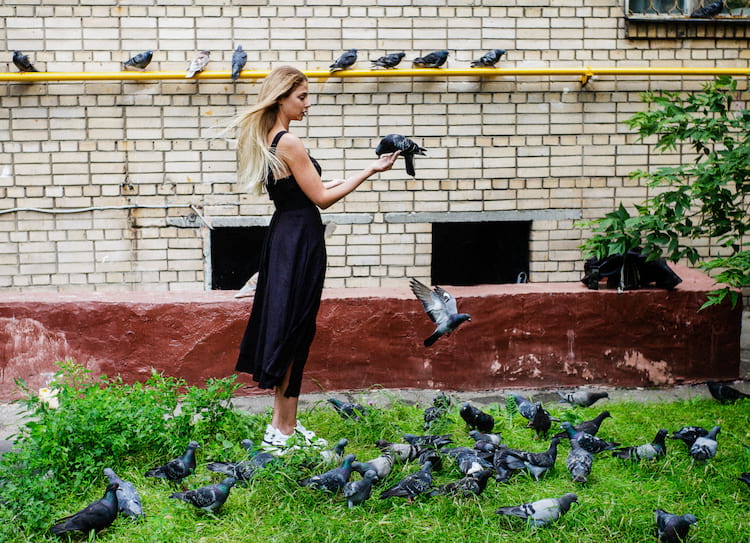 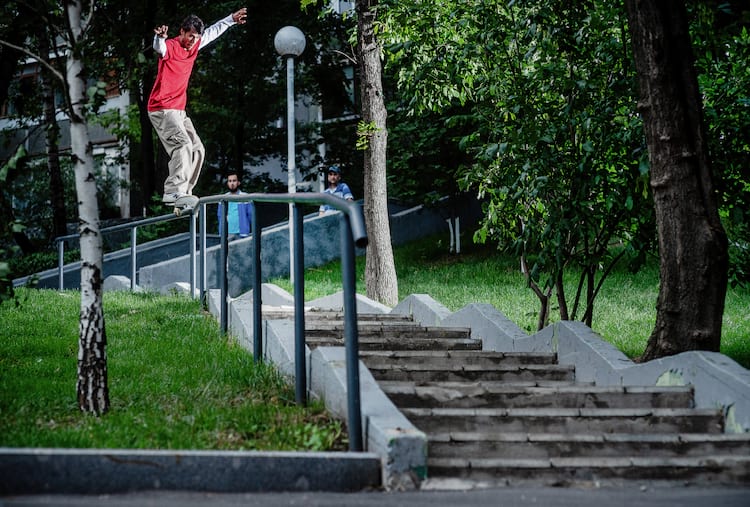 TK back 50-50s down, like, a quintuplet set. That’s got to be better than Torey Pudwill or something 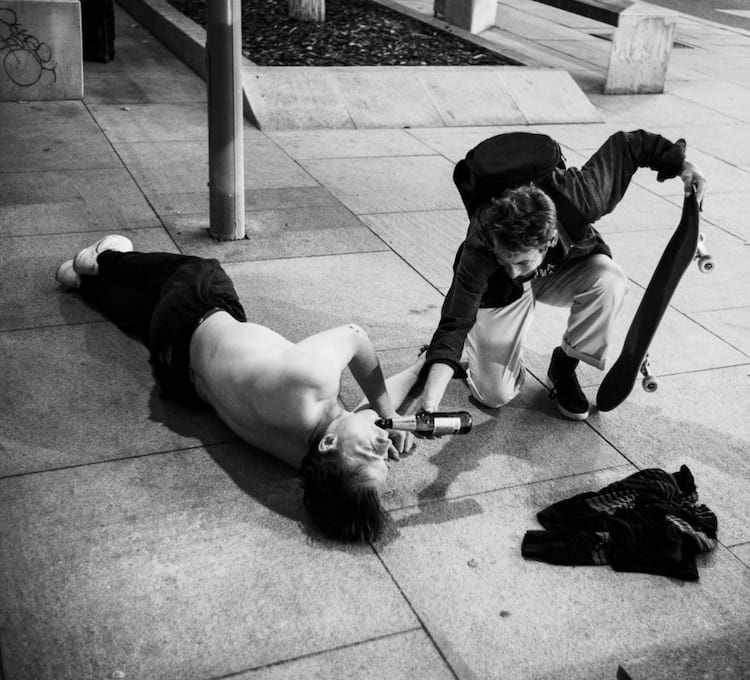 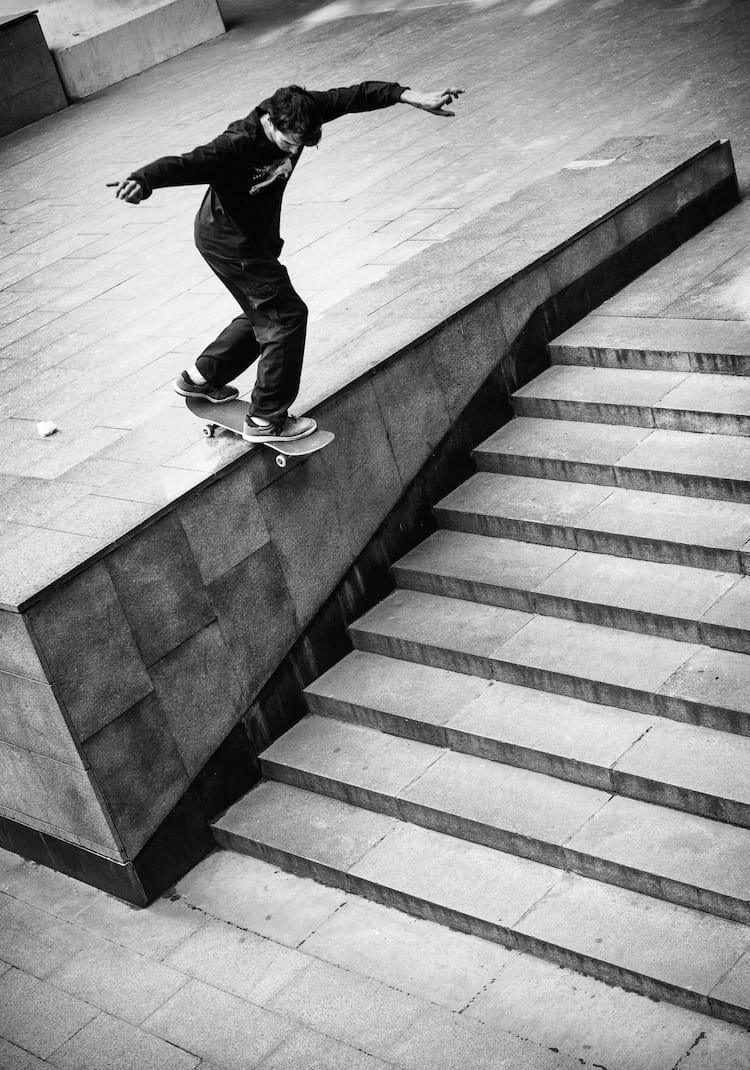 I got Tom Knox’s initials tattooed on my index finger when I was drunk. Everybody just thinks it’s about Terry Kennedy, though. Back lip