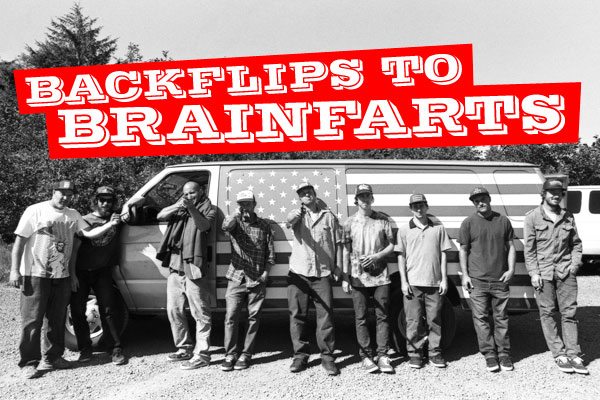 As I think back on this Oregon trip with ol' Cancer Dan, Schmitty, Joe Brook, Frecks, Peter Watkins, Taylor Bingaman, and myself, I laugh—I laugh because that's what we did most of the time. As well as a lot of skateboarding, BMXing, PBRing, foam pitting, doobing… Just living, I guess. 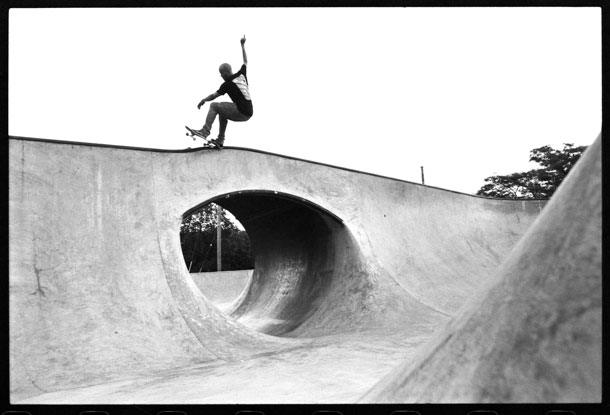 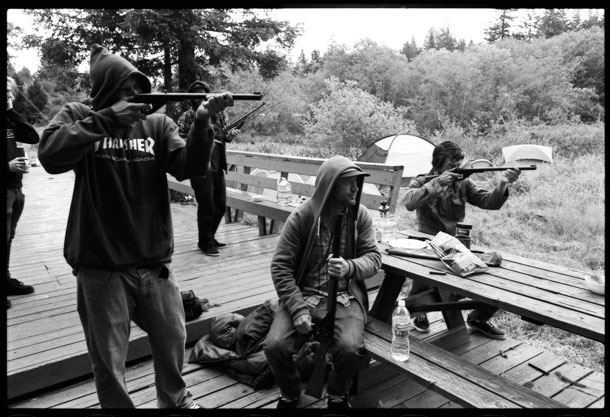 For starters, we had way too much room in the vans. I believe it was just Frecks and me in a 15-pasenger ride until we picked up MVP of the trip Taylor Bingaman in Sac, making it a cool three people in the entire vehicle. I think Joe's van had only four dudes in it as well. Serious chilling room. So we blazed up to Southern Oregon from SF, got out of the car like three Spicollis, and filtered into Myrtle Creek. Myrtle is truly a sight to be seen, with lines available for days in and out of pipes, over doorways, and coping everywhere. We skated until dark and then watched Taylor do a super heavy gap to nosegrind up the quarterpipe. We celebrated by igniting a dog's leg and starting the Fatback tradition of a meal at DQ (Dairy Queen) before the six hours of driving we had ahead of us.


The master of marination, Cherry Soda wallie up to backside tailslide. Windell's

Once in Portland, we played it by ear and hit the surrounding parks: Beaverton, Windell's, Hood River, Lincoln City… Portland's the ultimate vortex. Once you're inside, it's very difficult to get out. Epic parks, good friends, strip joints, and bars with cheap brew—you need a really good excuse to get out of that zone.


Drehobl, master of the grill, dissects a tough corner at Hood River like it was a t-bone steak. Noseblunt corner pocket 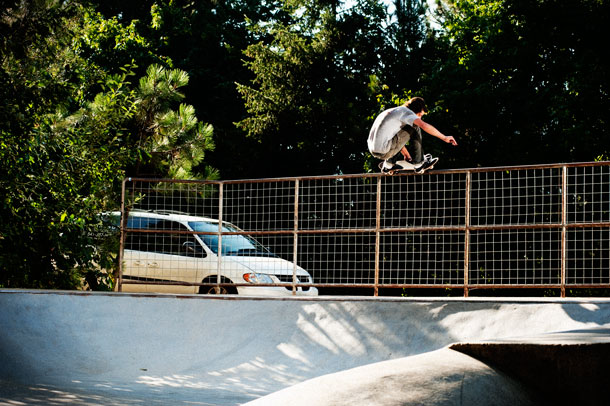 Watkins, aka Fuckboy, was gettin' some like a cat in heat. He rips one from the top turnbuckle, WWF-style. Top-shelf 50-50 stall. Click image to enlarge.

Lucky for us, Hood River and Windell's was just the excuse we needed. Both places ruled, but Windell's took the cake. That place kills so hard it's not even funny. Who doesn't dig a park that has skateboard tracks that go through the trees and a giant roll-in to an airbag that you can take a BMX bike into at like 20mph? I did my first backflip attempt and my first superman (sounds gay, but was fun as shit) here. The place simply rules. We camped next to Jamie Weller's zone, which is a block from the park. It was an amazing time with BB guns, PBR, BBQs, and doobs. We spent a couple days up in the mountains, then headed out to Red's place in Lincoln City. We picked up Gravette at his house in P-Town along the way. I don't think any of us realized how dangerous it was about to get. Long story long: We nearly lost our limbs via fireworks and nearly broke bones and burned our faces off from high-speed moto collisions. We pretty much lost all our energy after being at the compound for just two days. 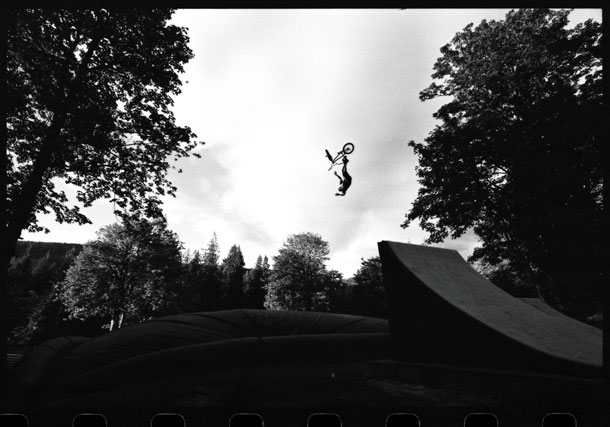 Both Gravette and Watkins fell to the moving sword, which was me on the 125cc motorbike. I ran into both of them head-on at like 20 mph, Pete Rose-ing my way into the bushes and track. I nearly took Grav's hand off and ripped my ballsack twice. That was truly scary. Sorry David, and to Peter, for almost killing you guys. Thanks to Red and his family for letting us stay in the player zone before it burnt down, which almost happened that night with us as well. Red had us tie up all these baseball-sized firecracker mortars together in a bundle and made us each hold one as he lit the whole thing up. I truly thought I was gonna lose a finger, or possibly a hand, during this one. I was hesitant but Red didn't give a fuck, so I felt like I had to roll with it. The fuses went up and I pulled on my mortar hard so it would disconnect—and when it did, I chucked it as quickly as possible. Fuck that! 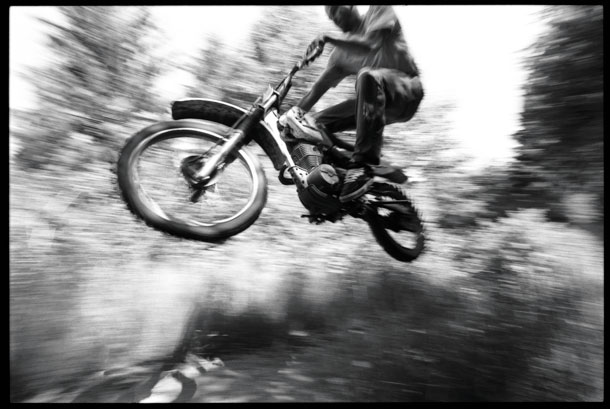 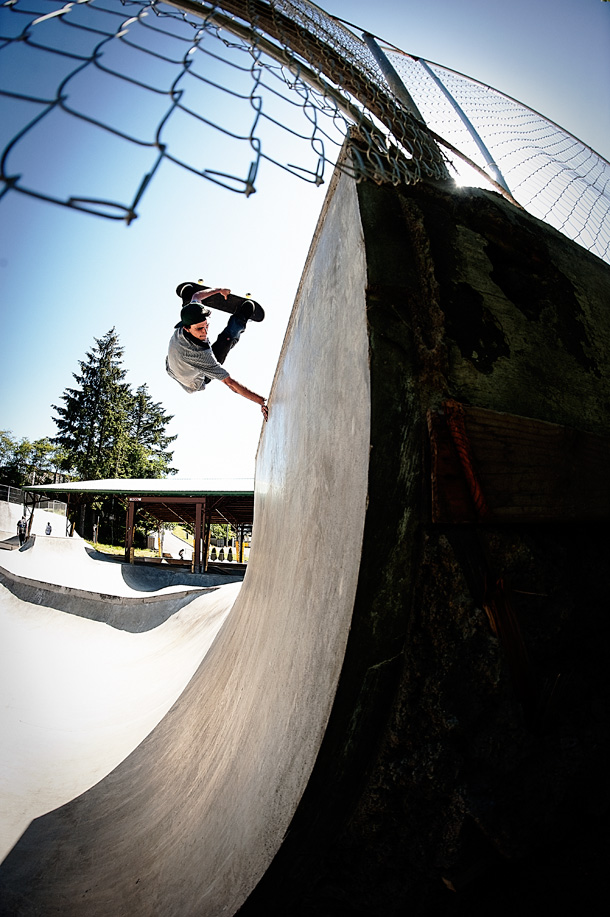 Bingaman throwing up a frontside invert in a cement wonderland. Gravette was hurt at the time and was almost in tears while saying, "I want to have fun like that!" Heal up, Baby Lamb!

This whole trip was fun as shit—a handful of friends getting out there skating and camping for a bit, taking pics along the way, and drinking vast amounts of PBR to keep hydrated. Can't wait for the next one. —Cranny