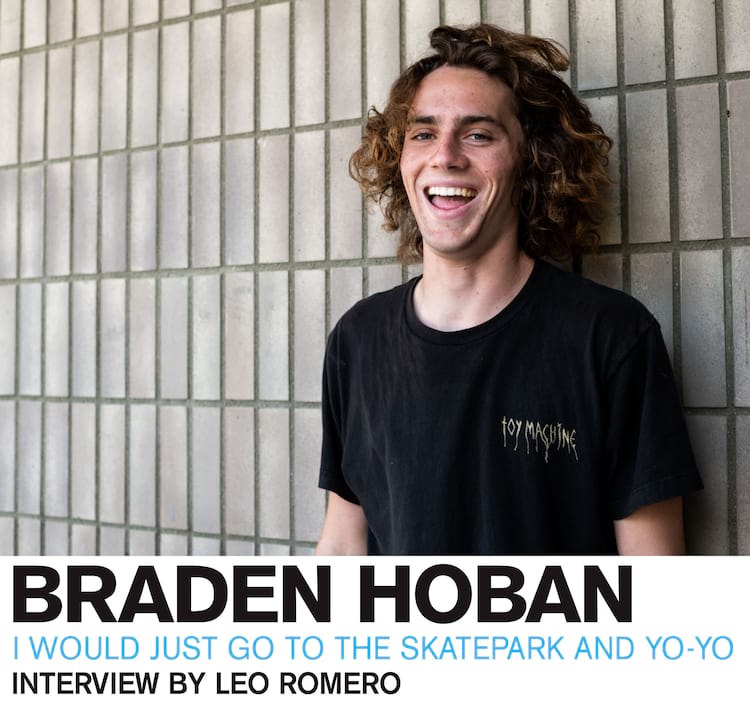 Before he was Filming Parts for Toy Machine, Braden dedicated his time to yo-yos and illegal fishing. Leo Romero hops on the line with the O'Side Hubba slayer to discuss those past lives, his new status on Toy and avoiding young love in service of skating. Read up on Vaccine’s breakout star in this piece from the May ‘21 mag.

So this is your first interview for the Bible?
This is the first.

You’re a young dude, but you’ve kinda done a lot of road miles already.
For sure. That’s something I’m sort of stoked about.

What would you say is the best and worst thing about being on the road for three months straight?
The best thing is just skating with your bros and having fun. The worst thing—dude, there is no worst thing. It’s all sick. It’s all hype!

You just nailed that first question. You nailed the first interview question perfect.
But, the worst thing, dude? What is that? There’s no worst part about a trip. 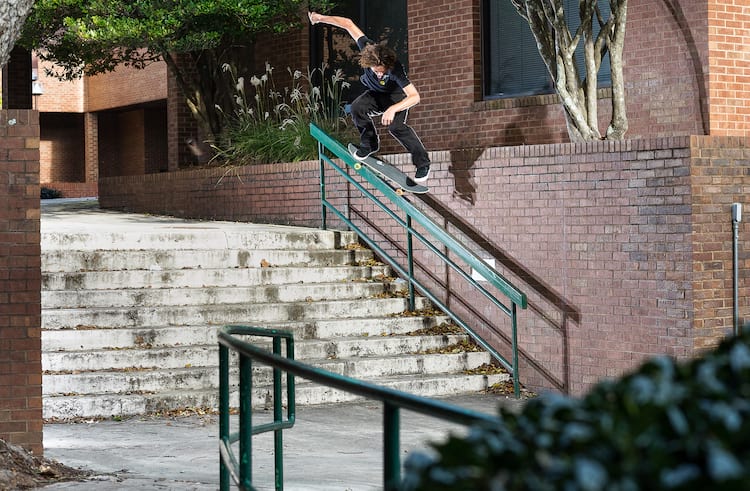 Kickflip crooks are part of the hype    Photo: Pendry

So you’re just now getting on Toy, which, congratulations, my bro. But you’ve had previous interests before you were a full skater. You were a yo-yoist and you were also a fisherman. Did you really quit skating to yo-yo?
Yeah, I fuckin’ quit skating for like three or four years or something in elementary school and just yo-yo’d. I would just go to the skatepark and yo-yo. I would barely skate, I’d just be on the vert ramp with my bro, yo-yos out.

So you’d go to the skatepark and just yo-yo at the park?
I mean, yeah, pretty much.

So you were the ultimate rebel—you would go to the skatepark with all these bad-boy skater kids and you’re thinking, Fuck this, I’m gonna yo-yo. Skating is not nearly as sick as yo-yoing.
That’s so fucked, but yeah.

That’s pretty sick. Talk about the time you almost got arrested for fishing. Even as a non-skater you were still doing bad-boy stuff like hopping fences, right?
Bad boys, man.

Braden wraps the hook around an impossible 50-50 in O'Side. Fishing’s tight

Let’s hear your almost-getting-arrested-for-fishing story.
Yeah, I was just taking what I knew from skating and putting it towards fishing. So I’d just look on Google maps and I would look at these ponds in these fools’ backyards and I would fuckin’ go hop their fence and try to fish. There was this one next to my house where I got like five days of fishing out there. Then the dude whose property it was called the cops on me and three cop cars showed up. I probably had some weed on me, just like a little-ass kid, and they put me in the back of the car and they called my dad and shit for him to come pick me up. It was fucked. That’s the only time I’ve been in the back of a cop car.

For fishing.
Yeah, for fishing, not even skating.

Such a bad-boy fisherman.
Dude, yeah. I did get arrested one time for yo-yoing, though. 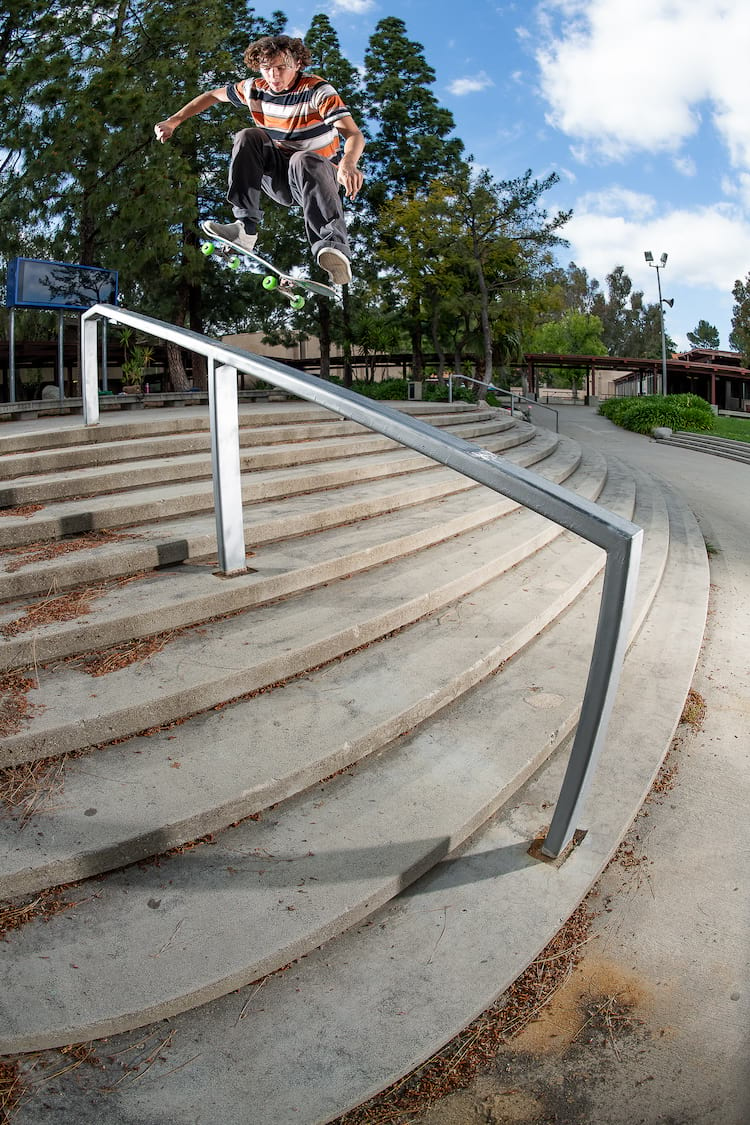 That’s pretty cool, man. So after fishing what brought you back into skating? Was dealing with cops and shit too much?
Yeah, I think I got back into it just because I met some new homies. That’s when I met all the Mohkie dudes. I met them in high school—they’re like all my friends from SD that I skate with to this day. They’re who I’m skating with right now, actually. I met them in high school and that was right when I got back into skating, then I was just skating every day with them. It was sick.

That’s great. I feel like you skate with so many different crews. You have the Mohkie guys, you come out with us, you’re with the Sk8mafia crew, you’re fuckin O’ Side. You’re involved with so many different crews, it’s pretty sick.
I never even thought about it. I just like meeting new dudes, skating with new people and making new friends. Just keeping it sick, keeping it hyped.

I feel like it influences your skating ‘cause you always have new tricks when we meet up.
Yeah, it’s sick skating with a shit-ton of different people that skate different and stuff.

Do you have a favorite crew to skate with? I won’t be offended if you don’t say it’s us. I would think Sk8mafia. They seems like the funnest.
I mean dude, fuck, like SD, I don’t know. I like skating with them and I like hanging out with them and shit. But I don’t know, SD is like, it’s gnarly to skate in, you know? Like the spots and stuff.

I guess you can’t pick a favorite crew. I guess everyone’s pretty sick.
But like skating with and shit, honestly you guys. ‘Cause you guys are rail skaters and we go to rails. 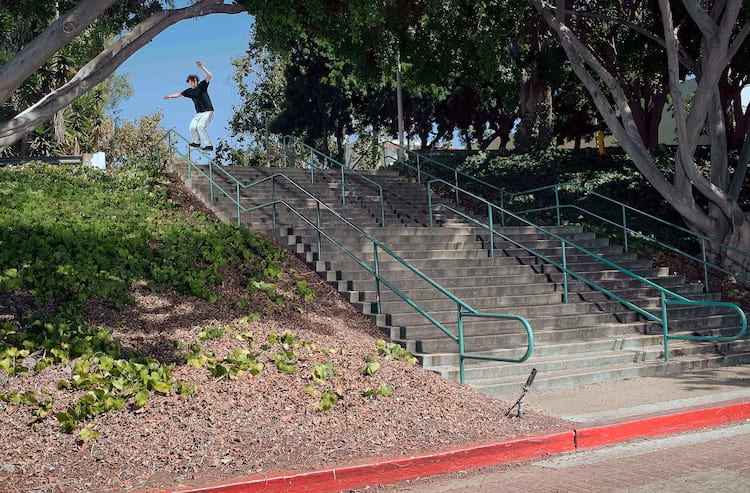 Hangin' with the rail skaters pays off. Frontside 50-50 for the ages     Photo: Rhino

Dude, switch grinding triple kickers? Brandon Turner is one of the best skaters ever. That guy’s the sickest.
It’s sick chilling with them. But I have the most fun with you guys, honestly. Skating parks and shit – none of my other homies like skating parks as much as you guys do. We get down on those rails, too.

I’m gonna choose Sk8mafia. I think they’re probably the sicker crew to skate with.
Alright, for sure. If I’m gonna go with a favorite, I’m gonna pick you guys. 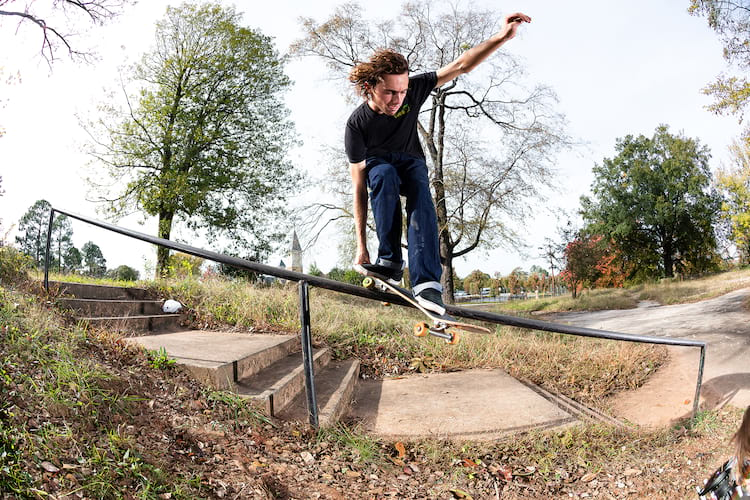 That is badass.
He’s been my favorite for a while.

From child to now?
Yeah, ever since that Cold War part.

That is so sick. Have you skated with him? Being in San Diego have you got to see the Tommy Guns in action?
Yeah, I’ve skated with him. I got to meet him but I never talked to him that much. But I was at Balboa Park the other day skating with my friends and we were just trying tricks on this little gap and he pulled up with his family and watched us for a little bit. It was sick. 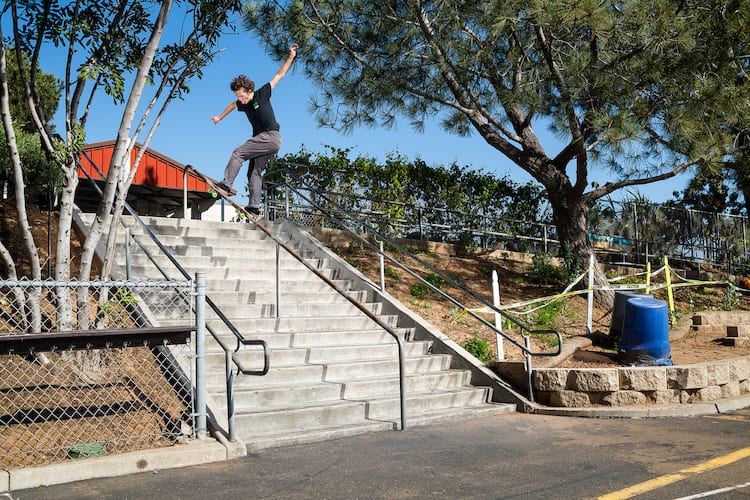 Dang, you had Tommy Guns watching you skate?
Yeah. And I was trying fakie frontside flips.

Did you do it for the Guns?
I didn’t, dude. We left, I was taking too long.

Nineteen years old, young man, just got on Toy Machine. You’re a seasoned vet of the road already and you’re in Las Vegas. So what does a nineteen-year-old, fresh-to-the-market am do in Las Vegas?
Well, we’re kinda fucking it up on the Strip right now. Just hitting some spots. Yeah, just having a good time. We just skated this double set. I snapped my board and had to use my friend’s board but I got a hardflip on it, which I’m pretty stoked on.

That’s badass.
I walked like an hour to do this, which was fucked.

How are your parents with you becoming a hot-shot am who skates his butt off and also dabbles in a little bit of the devil’s lettuce?
They’re pretty stoked on it. You know how parents are, man.

Well, my parents are different from yours, so I’m curious about your parents.
Yeah, I mean, they weren’t stoked on the lettuce at all, but they’ve eased up just because I’m fucked.

They eased up ’cause you’re fucked?
They definitely chilled out, but they’re fuckin’ super stoked on me skating. 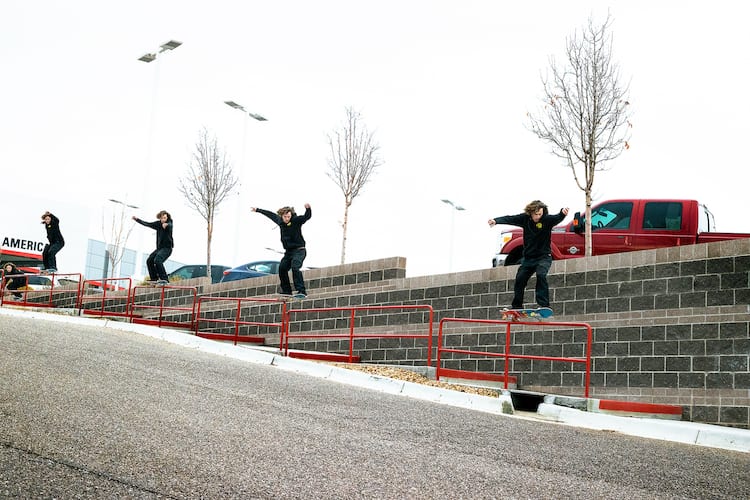 That’s cool. I met your folks and they seemed really nice and supportive.
Yeah, they’re so sick.

I feel like skateboarding, nowadays, if you’re a child in your teens and you get into skateboarding I think your parents are more supportive than they were when I was younger.
Yeah, I’m sure it was a lot different.

So they’re all gung-ho about you becoming a Toy am and everything. Have you told them that you’re a Toy am?
I told them when I got the phone call from Mike just ’cause I was super fuckin’ stoked. They were so hyped. They were like, Yeah, let’s get that money and I’m just like, Alright.

That’s what they said?
Nah, not exactly. But yeah, they’re hyped.

How did that conversation with Sinclair go?
Dude, he was so mellow about it. I was trying not to fuckin’ tear up, I guess. 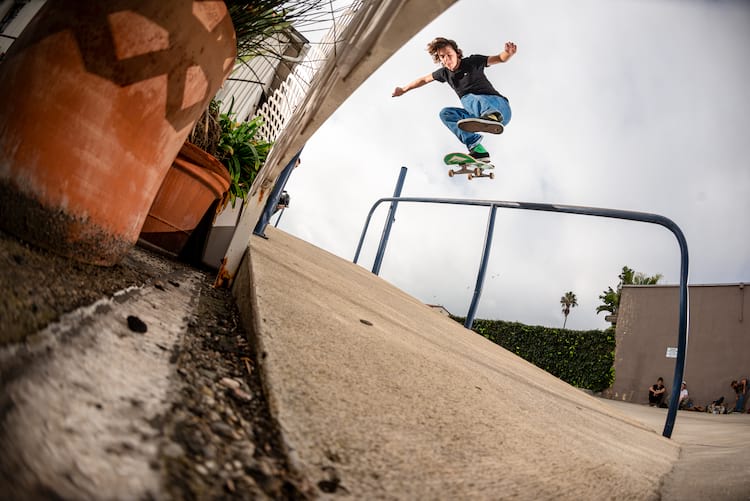 Trying not to trip?
Yeah. But I was super hyped that it was happening.

You didn’t jump over the moon or anything?
I mean, yeah, I was fuckin’ super stoked. I told my mom and dad immediately. We got some ice cream.

Tell all the Thrasher readers what a Pizzooki is.
It’s pretty much cookie dough. You gotta get the right one. What’s that brand called? Tollhouse cookie dough. So it’s from BJ’s, but Leo just started making it at home. It’s cookie dough and you smash it down with your hand and then bake it in the oven and then put ice cream and chocolate syrup on top. And it’s fucked.

I was hoping for a much grander explanation than you just gave me.
Dude, you know me, man. I’m not good at explaining things. But yeah, it’s your thing, bro.

It’s our thing now, man. We shared a moment on the last trip.
Oh, for sure.

You’ve graduated to the level of Pizzooki grand master chef.
Yeah, I started making them after you.

Well, let me ask you this—you’re 19. Have you experienced love, any kind of love? Have you been in love with someone?
I’m in love with the fuckin’ bros.

That’s awesome, man.
But no, I have not fallen in love with anybody yet. Not any chick.

Well, don’t fall in love because that is the only way to keep getting tricks.
Yeah. No chicks equals tricks.

What’s on the horizon for Braden Hoban, new hot-shot Toy Machine am?
Well shit, we’re about to fuck up Vegas and then go back to SD and keep on filming for the Toy Machine part. Try to get some last few tricks and just keep skating with the homies and just keep having fun ‘cause that’s what it’s all about.

It’s true. Any last words? Any thank yous? Any send offs?
I would like to thank mom and pops for sure. All the Mohkie bros, Isaac and Jesse and the ledge himself, Leo Romero.

You can’t thank me, I’m doing the interview!
Well, too bad, ‘cause you guys have helped me out so much. For real. 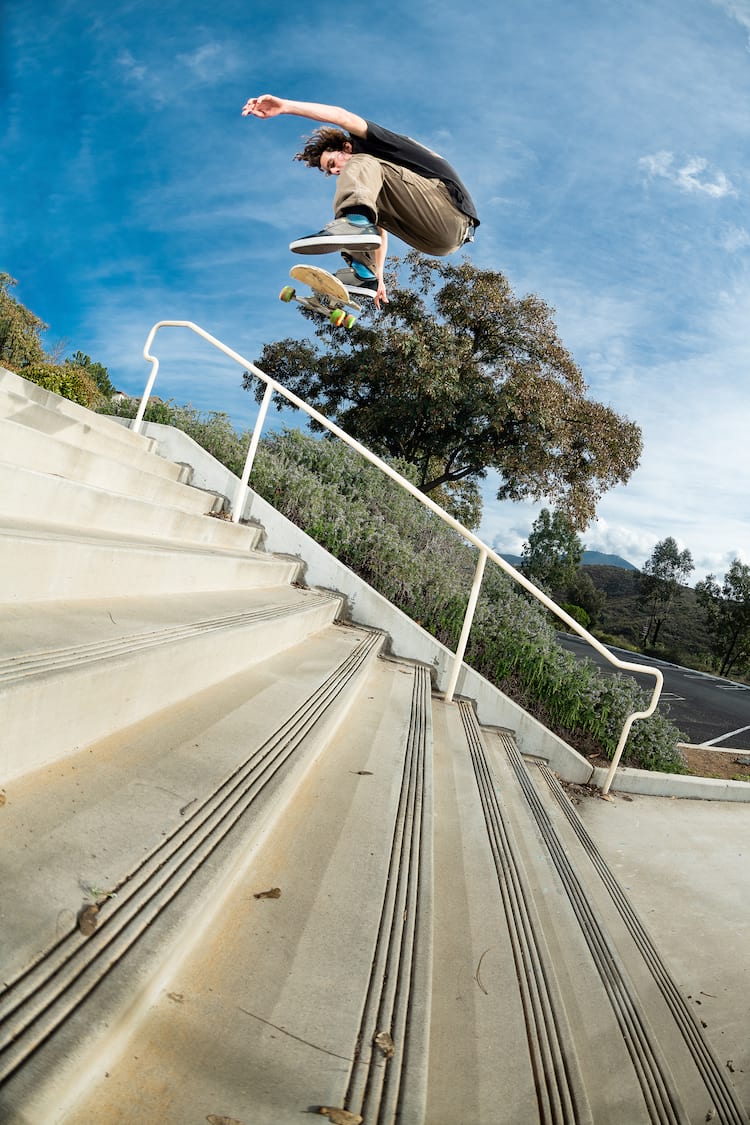