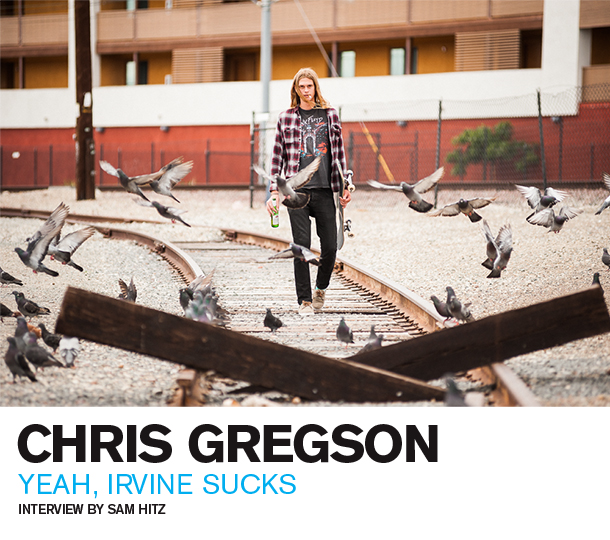 Okay, I’m just gonna start with some protocol shit and then it will probably go left field down the line. State your full name and date of birth.
Christopher Randolf Gregson birthed December 22nd 1990 in Irvine, California, and currently residing in San Diego.

You grew up skating in Irvine, right?
Yeah, Irvine sucks.

What’s the worst thing about growing up in Irvine?
That would just have to be the cops, for sure! It’s the only privately-owned police department in the entire United States.

Sounds like a private militia.
Irvine is actually a family and the town has only been around for about 30 years. They owned the best piece of land, you know, right in the heart of Orange County, all the orange groves and stuff. Once they decided to turn it into a city they made it so they still owned the land. Now all the businesses in Irvine have to pay a certain percentage to that family. It’s all owned by the Irvine family. 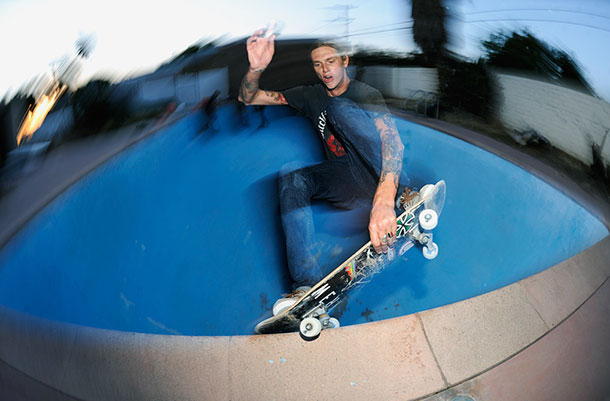 They could just close it down and build a wall around it, huh? Do your parents still live there?
Yeah, and my younger brother.

Do you tell ‘em it sucks?
Oh yeah. They know how I feel. At the same time, living in a spot that’s as boring as Irvine is what got me into finding skating. And then, like, I met a small group of people that skated. Everyone that skated in Irvine knew each other. I met Figgy at an after-school skate program in seventh grade and he pretty much became my best friend and we just skated all the time. I grew up with Collin Provost, too. We all just grew up skating, learning and feeding off each other. Without living in such a boring place like Irvine, who knows what else we could’ve gotten into. It sucks but at least we got out of there.

Most people never get out. You hit Washington Street pretty hard; I’m surprised there’s no WSVT photos in the mix here.
It’s just hard to think of stuff to do there after years of filming there. But I still try and skate there when I can but just trying to skate everything. 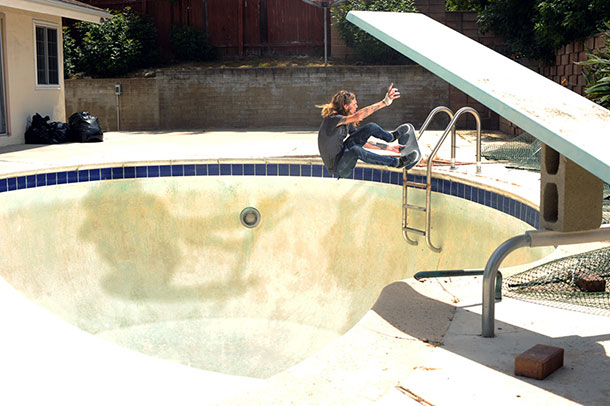 Stale over the ladder

What’s the most suffering you ever put in on a maneuver there?
I’d say most recently, a trick I shot with Rhino. I did a kickflip lipslide over the flat wall love seat. That took, like, three hours. As far as old stuff goes, I would say—I don’t know. Everything takes me a long time there.

It should.
Just ‘cause it’s the hardest park to skate and each time it’s different. You never know if the coping is going to grind or just stop or if you’re just gonna get pitched pumping the hump bump trying to get where you want to go.

What are some of your first memories of going there?
The first time I went to the bridge I was with this dude Steve who used to be the Birdhouse team manager and we were filming a line. It was so long ago. So this guy—I wish I could remember who it was—but someone came up and told Steve if he didn’t put the camera away he was going to grab it and throw it over the fence. Then I was scared to go there for years. Even when I moved to San Diego I didn’t go there for at least a year ‘cause I was so intimidated. Then a bunch of people were, like, “You need to go there and skate. It’s so fun!” And eventually that was the place that got me re-stoked on skating again.

You should’ve kicked whoever it was in the nuts, even if it was me. What do you think of the term ATV in skateboarding these days? To me, it’s getting pretty blurry when it comes to the youth, you know? The attitude is, like, why wouldn’t you attack a mound of concrete the same way you would a set of stairs? It’s the norm. Like how you, Willis Kimbel and this generation skates—it’s
fucking awesome.
I grew up skating the Vans skatepark at the Block, so when I started skating I didn’t even know the difference of, like, street skaters, vert skaters or pool skaters. I just skated the same park and just skated everything. So that’s just how it’s been my whole life. I feel like with Dreamland, Grindline and Team Pain building theses massive-type parks, people are getting stoked on tranny and being more well rounded, I guess. They’re definitely breeding grounds. You look at the people from Oregon and they grow up skating the biggest, best parks and they’re all just phenomenal skaters.

You guys are pretty stoney over there at Blood Wizard. I thought you were gonna hack up a lung last night when I talked to you. What’s your medicinal booze-to-
herb ratio?
I definitely smoke more twists, but when I’m skating I definitely want to be drinking more beers and having fun. 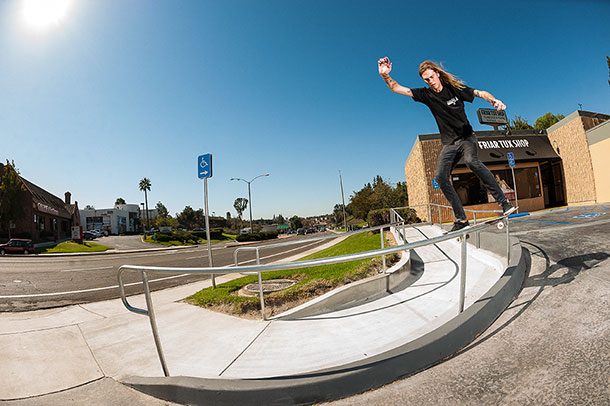 What tunes do you binge on when you twist em up? Besides Pentagram, though.
Early ‘70s heavy psych stuff. There’s a bunch of new bands coming up with that old-Sabbath-type sound. I’ve been super stoked on this band called Danava from Portland.

Yeah, Sabbath pretty much started it all. You ever hear a band called Hour of 13?
Fuck yeah, they’re the best. The song “Naked Star” and their last album, 333, that’s so good.

Glad I didn’t have to say, “Check ‘em out.” So has Toad ever asked you to morph into the Blood Wizard himself?
It’s usually Jerry Gurney and Drew Dezort. It sucks to skate in. You’re dripping sweat the moment you put it on.

I figured Toad just cast a spell and, BLAM! You’re the Blood Wizard.
I should just say no. No one even knows who he is. He just comes and goes. 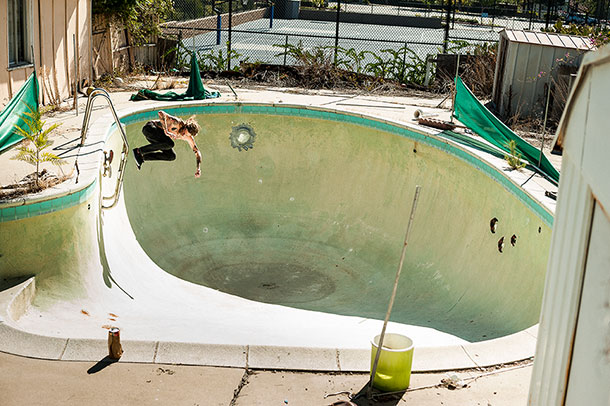 If you had a spell to open a time portal, would you and your skateboard choose to go forward or backwards in time?
I would go back in time for sure and skate all the legendary stuff I grew up watching in old videos that I was never able to skate.

Like, how far back, though?
Maybe just go back to before skateboards were even invented.

There you go! Go back to the Medieval times with that skateboard and you would dominate worlds. Now that’s some wizard shit.You ever get down with some Dungeons & Dragons role playing?
No. Never.

No? I seen some Blood Wizard graphics with the D&D gamer’s dice on ‘em.
I was a little jealous. You should look into it. What’s your top-three all-time cult movies?
The ‘70s cartoon Wizards, Heavy Metal and the old cartoon version of Lord of the Rings. Those would be my top three. Black Sabbath, too. That’s a good one.

Check out Inquisition, and if you ever come across a movie called Vampire Sadism, don’t watch it. Anyways, do you guys still roll in that monstrosity of a painted van?
Yes, my roommate Greg’s van. He actually has two of them. One’s an Econoline four-wheel-drive painted camo, and he’s got the EuroVan that has the pop-top stove and is painted camo, also.

Yeah, thats the one! All I know is that when I see that thing rolling up there’s like a dozen dudes about to pour outta that fucker.
Yeah, we’re partying in that thing all the way to the bridge! 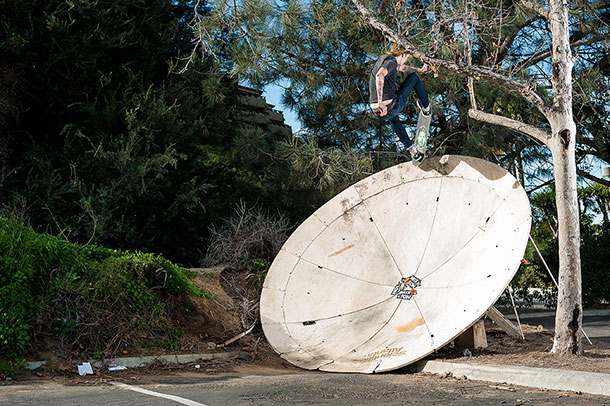 Rhino told me you used to have a job filming for Flip. Must have been insane filming with Rowley.
So intense. I was 17 when they hired me and before that I never made a dollar filming in my life. Ewan picked up a film reel at Blitz, watched it one day and was stoked on it, I guess. Filming with all those dudes was so crazy. I was just a little kid. Half those dudes were in the Tony Hawk Pro Skater game that I grew up playing.

That’s a heavy gig. They never paid any attention to you skating?
Nah, I was there to film and that’s what they were paying me for. They were pretty strict about it. That’s what kinda dragged me away from skating ‘cause it was so serious. Filming with Geoff was intense. I would get texts from him, like, be there at this certain time—your job depends on it.

Didn’t you guys get arrested together?
Yeah, when he got the Thrasher cover—the impossible over the roof gap in La Habra. He’d gone there the night before and drilled plywood on the runway and landing. He didn’t even try to ollie it, just starts with the impossible. So me and Burnett are on the roof and this janitor comes out screaming at the top of his lungs while Geoff is jumping the gap. Eventually he broke his board. It was so hectic. He set up a new board and I swear it was first try. He went back on the roof and made it. Burnett and I were freaking out! We jumped off the roof and within 20 seconds of our feet hitting the ground we got tackled from behind. Both cameras went flying in the air and then straight to jail. They found all the plywood drilled on the roof, a drill covered in Flip stickers and Geoff was wearing a Flip shirt. There was no getting out of that at all.

You got the clip, though, right? The rest is history.
Yeah, Geoff had to pay two grand for each tape to get it out of evidence.

Well, enough of that. What are you conjuring up this summer?
I’m going to make the next Blood Wizard promo vid, Masters of Wizardry, that will feature me, Jerry Gurney, Jack Given and the rest of the team will have clips. We’ll be skating in Marseille, Prague and just hanging out with the bros, partying, smokin’ tweests.

Sounds about right. You got a pro board coming out?
I don’t know. That would be cool. It’s not up to me. 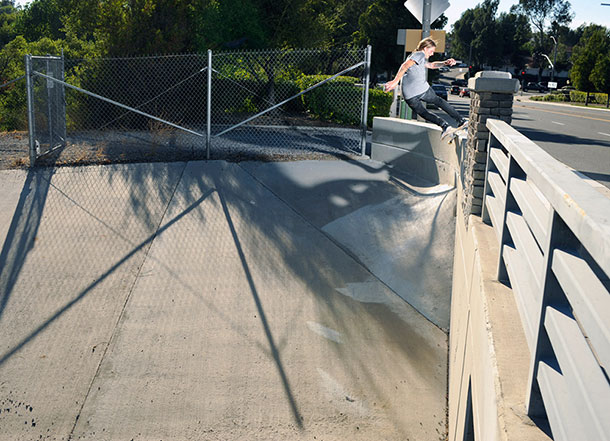 Let your skating do the talking. Any last rites? You want to holler at your boys or sponsors and shit?
All hail the Wizard and everyone that’s helped me along the way: Mom and Dad, Active, OJ, Indy, Bronson bearings, Witchcraft hardware, Crap eyewear.

Wait, crap what? That’s for real?
Yeah! Truman and Blake ride for ‘em, too. Crap eyes!

Yes. Finally someone gets to the point.
And thanks to Rhino for making all this happen and to you for doing this interview.

No, man, you did all the work.