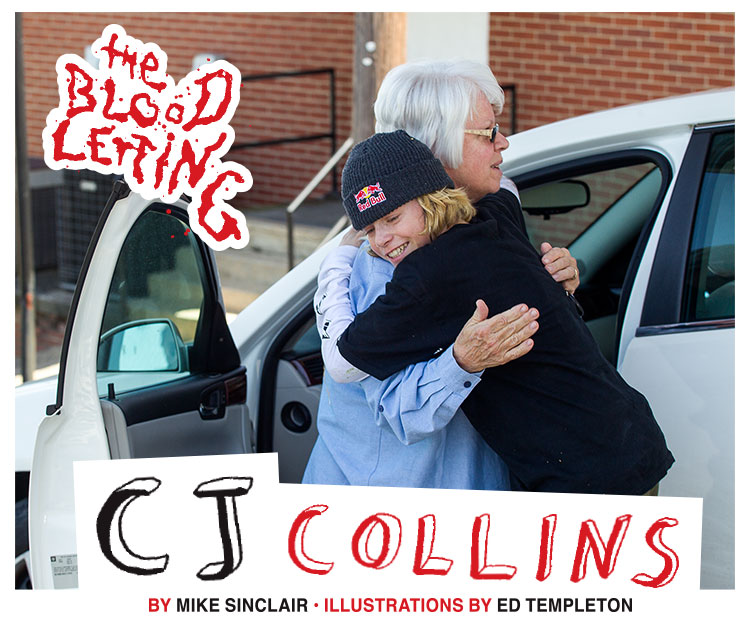 You let us skate, you get a hug     Photo: Karpinski

CJ Collins is growing up right before our eyes. Yesterday he was 15 and today he is a professional skateboarder who has traveled the world ten times over. I can’t imagine what is coming next from this kid. He has impressed me so much at a young age that I really don’t know what to expect anymore. CJ Collins is the future.

How are you doing, CJ?

Good, just in Italy right now. We are doing a little family vacation.

When do you get back?

I get back later this month. 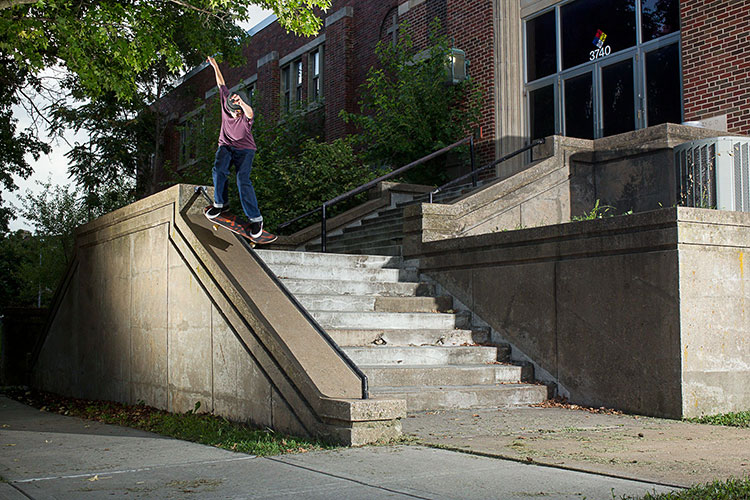 That seems to be the theme of this video—everyone is on vacation at the deadline.

Yeah, it’s crazy. Have you been stressing the Programming Injection deadline at all?

How much did you grow this year?

How has pro life been for you?

Dude, I’m still tripping on it, honestly. I can’t really believe it.

Tell everyone what you thought when you opened up that box at the Vans Showdown and you saw your pro boards sitting there.

I didn’t know what was going on. I was frozen for a minute; I was shook.

You got second place in your first pro contest. That’s pretty amazing.

What has changed since you turned pro for Toy Machine?

So you turned pro and went on vacation.

Yeah, pretty much. I guess I did.

Remember when you were on the trip six months ago and you were bragging to Leo that you had two pubes?

Leo and Axel say that you never shower.

Yeah, for sure. I use to go on trips and not really shower that much. Now I do it every day. 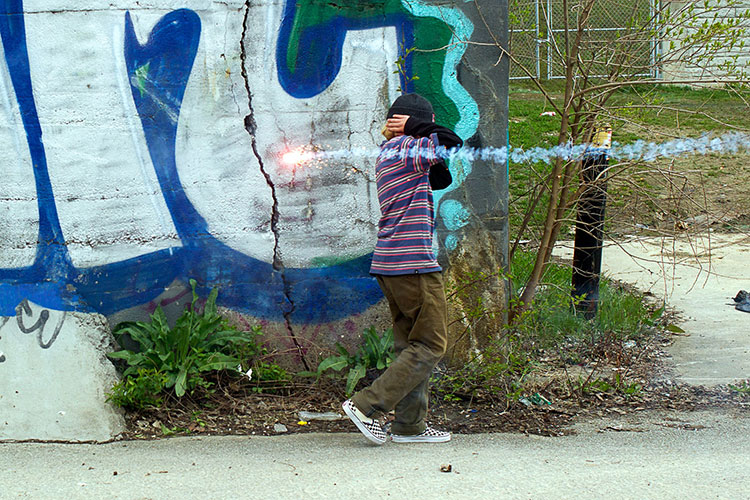 What’s your best memory from the Toy Machine tours you have been on.

The best one was me and Leo and we were riding scooters at night and he was on the back but he was blacked-out dunk. We got lost for two hours and we didn’t know how to get back to the crew we were with. We went into a hotel to ask them how to get back. I had to take charge and Leo was just hanging on the back. That was my best memory from a Toy Machine trip, just being lost and riding around with Leo in another country.

You are growing up in the van instead of in school. How does that feel?

It feels awesome. I fucking loving it.

Have you learned anything from the Toy Machine team?

Stand my ground, don’t do anything stupid or Collin will beat me up.

Do you ever do any of your schoolwork on trips?

Yeah, I do some of it in the back of the van or at the hotel.

Who on Toy Machine has ever helped you with your homework?

Corey Glick helped me once with my geometry.

Corey Glick does not ride for Toy Machine. He’s the nerd on Foundation.

Who would you trust to help you with your homework from Toy Machine?

Dakota Servold is on Foundation.

You’re right. Leo would for sure help me.

Do you want my suggestion on who to ask?

Yeah, who do you suggest?

I think Axel would be your best pick for homework on Toy Machine.

Oh really? Okay, I will remember that. 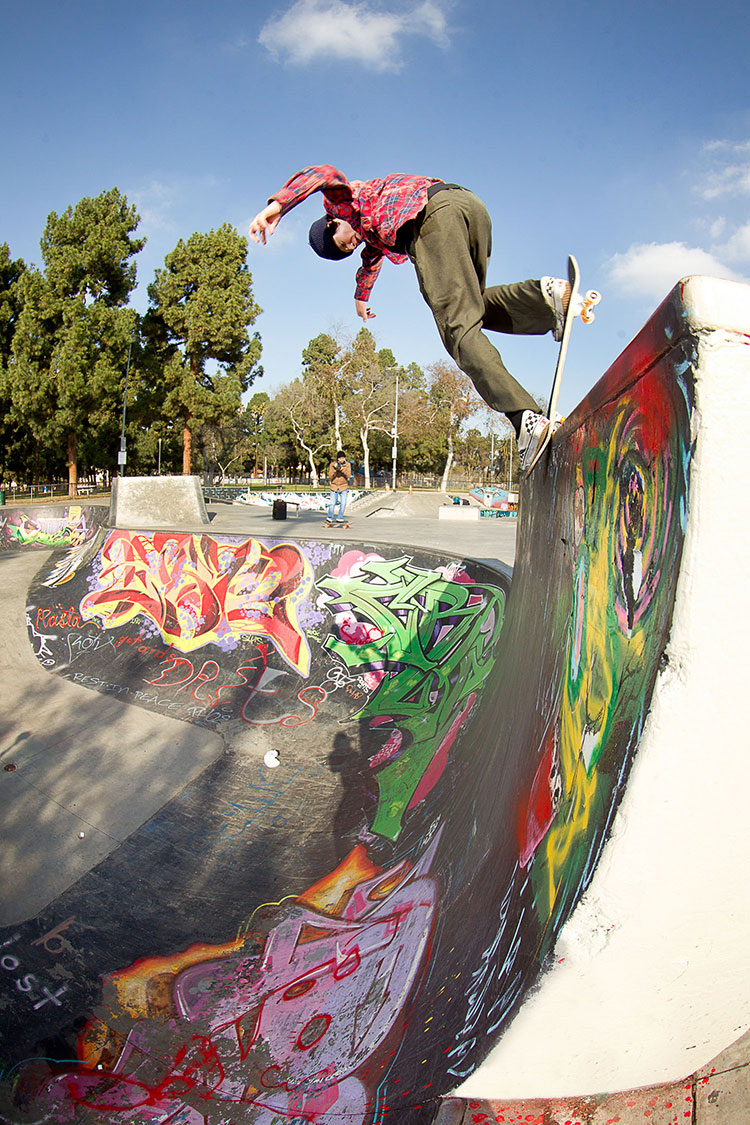 Getting rad with plaid, CJ perches a backside noseblunt on the E     Photo:Karpinski

At what age did you find out that you can just do whatever you want?

What is the raddest place skateboarding has ever taken you?

Sweden. I love it there. Skateboarding took me to Sweden so that’s pretty damn cool.

Did you ever think you would become a professional skateboarder?

No, not really. I thought maybe when I turned 28 or something like that I might be ready to turn pro. 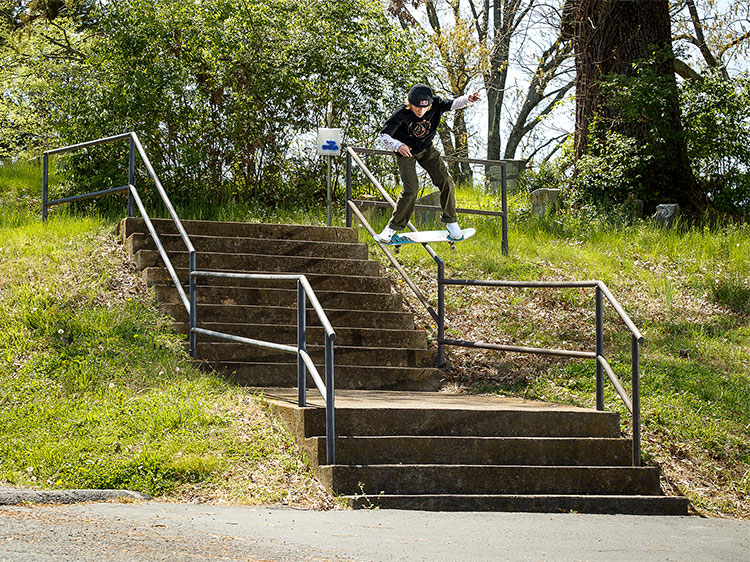 I would say that’s probably not happening if you are am for 14 years, CJ.

Yeah, that is a long time to be am.

If you could put anyone on Toy Machine, who would it be?

Who would you kick off Toy Machine?

I wouldn’t kick anyone off.

Someone has to go, CJ. Who is it going to be?

I love how Billy always gives you shit.

Yeah, me too. What grade are you in?

Can you solve two problems for me right now?

What kind of problems?

What is the square root of 30?

He made ten dollars.

Ah, man, I have to write it down and look at it for awhile.

I have a shitty mind. 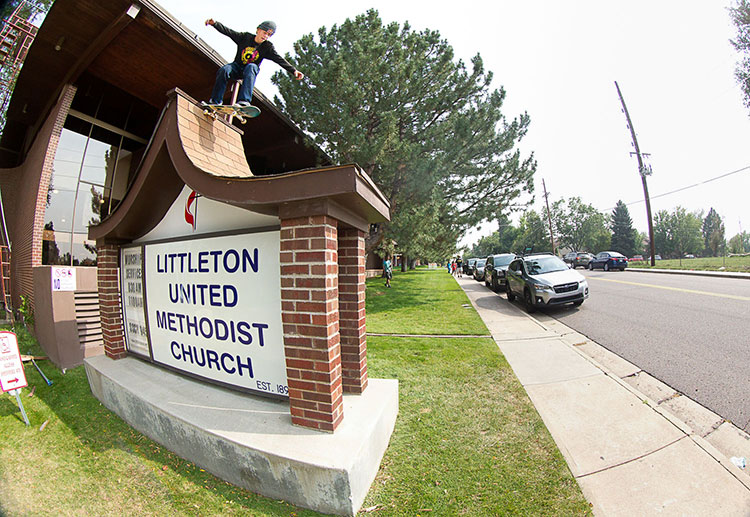 What do you think you will do after skateboarding?

Maybe after skating I would like to go to college.

Who would you take with you from Toy Machine to go check out colleges?

You know what would be sick? To go check out colleges with Collin Provost.

I think that is an amazing idea, CJ, and I want to document that when that day comes.

Yeah, let’s do it. That really would be amazing.

What’s the best thing about riding for Toy Machine?

It’s amazing! The team treats me like I’m their little brother. It’s sick and everyone’s all fucked up.

Is this your first part in a major video with a team?

Who do you think will open the video?

I’m hoping Myles will open it up because he is really good and he’s the new guy.

Who do you think will close the video?

Leo, because he’s the oldest. 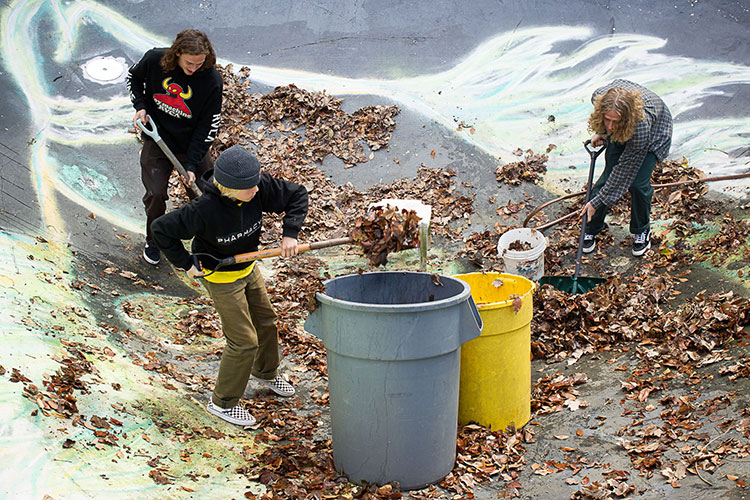 What are your other interests outside of skateboarding?

What about doing your own graphics on Toy Machine?

That would be so sick.

Talk to Ed. Let’s get it going. Daniel Lutheran just did his own graphic on Toy Machine. He did his own version of the fists graphic.

Yeah, it came out super cool.

What’s up with your YouTube channel? Are you keeping that going?

Yeah, I still have the anti channel going.

Do you think you will keep that going when you are an adult?

Yeah, I think so. We will see when the times comes.

I hear YouTubers bring in the big money.

You ever seen Billy’s Balls?

Oh yeah, I did see that. The beer pong stuff.

Yeah, he was an early YouTube star. He got asked to be on late night TV but declined because he couldn’t get the ball in the cup every time.

If you had to pay Billy out of your hard-earned money, what would you think is a fair salary for Bill these days?

If he was working for me and he was getting the business going, like he started the coolest liquor store in my town, I would pay him $5,000 a month if he was killing it. 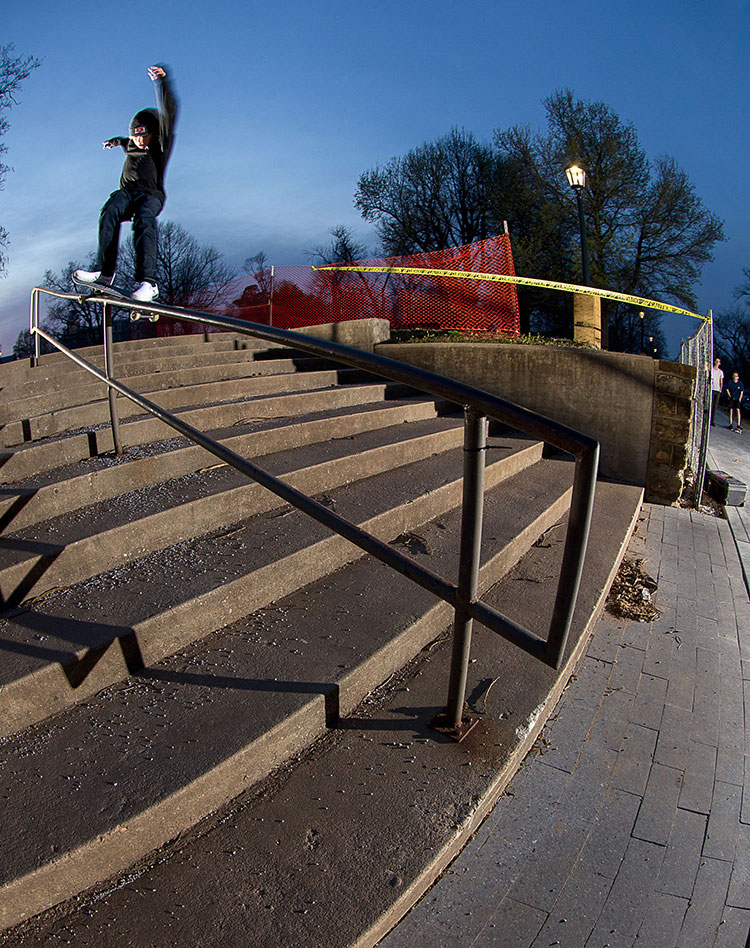 How many Toy Machine trips did you go on filming this video?

I think I went on four trips total—Germany, China and two cross-country trips.

What is the raddest place skateboarding has ever taken you?

Sweden. I love it there. Skateboarding took me to Sweden so that’s pretty damn cool.

How many trips did you go on total last year?

Do you think you will burn out?

I hope not. I freaking love what I am doing right now.

How many times had you been around the world before you got your license?

I have probably been to Europe ten times already.

What is your first car?

I heard you and your dad got matching tattoos down in Brazil.

Yeah, we went down to Brazil for the Vans Park Series and we both got the same tattoo.

Serra Negra. That’s the town in Brazil we were in and we both got that tatted on our leg.

What the best advice your dad has ever given you?

Shut up and listen.

Who would you not take advice from on Toy Machine?

What do you want the world to know about CJ Collins?

I hope they think I’m sick.

I love you, bros. 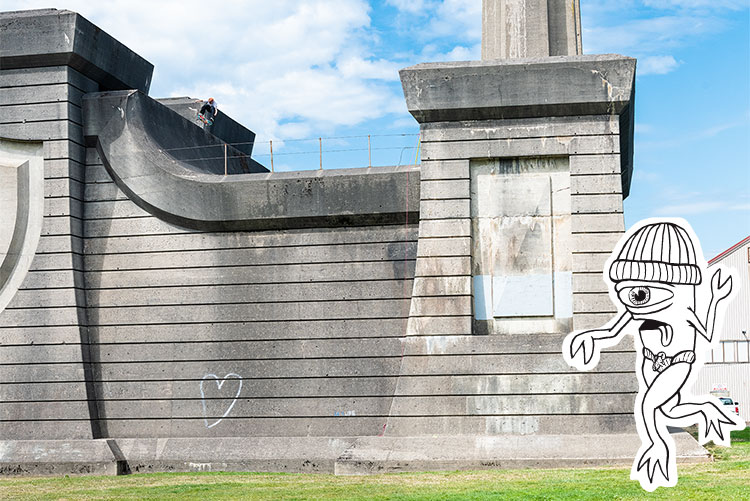 Jump Off a Building? Nah, a bridge, fool. CJ kickflips into St. Johns in Portland. The kids are more than alright     Photo: Brook