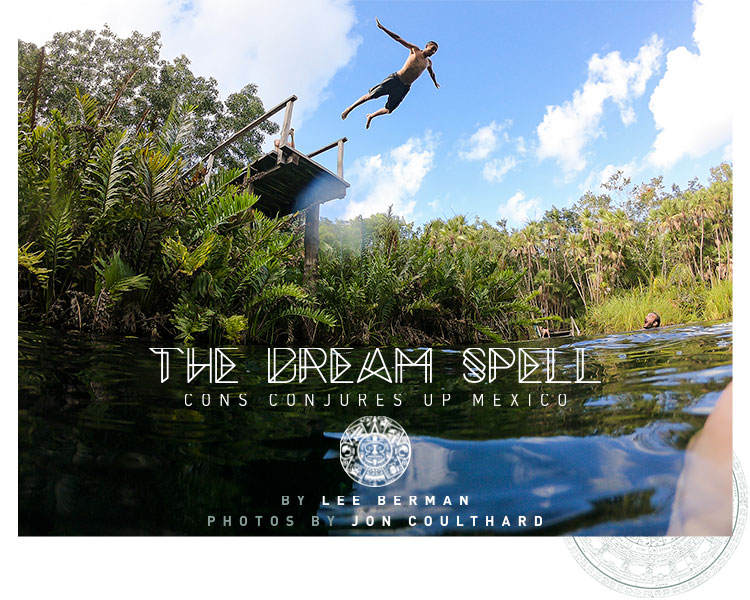 I stared in horror as the customs officers dumped 30 pairs of Louie Lopez’ new Converse shoe out of my duffel bag and started ripping out their insoles. I thought I was either going to get fined for illegally transporting commercial goods or worse—I’d spend my first night in Mexico sitting in a jail cell. Fortunately, they bought my story about the shoes being for a friend’s after-school skate program and let me go. Unfortunately, our 15-passenger van that we’d reserved had been rented because of the delay. With no other options we headed for the cab line and luckily found two guys with Chevy Suburbans who agreed to be our drivers while in town. Things were finally looking up! As we pulled up to the hotel we were greeted by Ryan Lee—it was his 22nd birthday. He handed me a beer and cracked one himself. Just then, a cop appeared behind him and slapped handcuffs on him. Welcome to Mexico City! 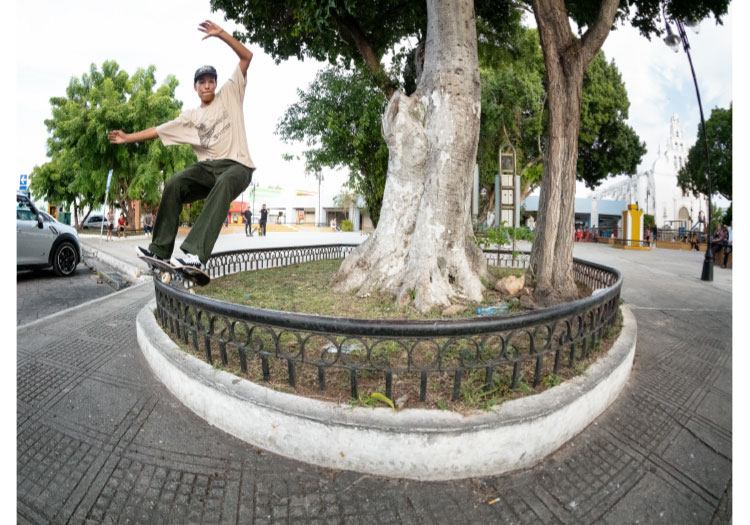 Fresh off the plane and feeling the Merida vibe, Louie was charging around this plaza at full speed, giving the locals the demo of their lives. He was laughing while 50-50ing through this curved bar and there was no telling how he’d pop out—straight, backside 180, shove it, whatever. Must be nice 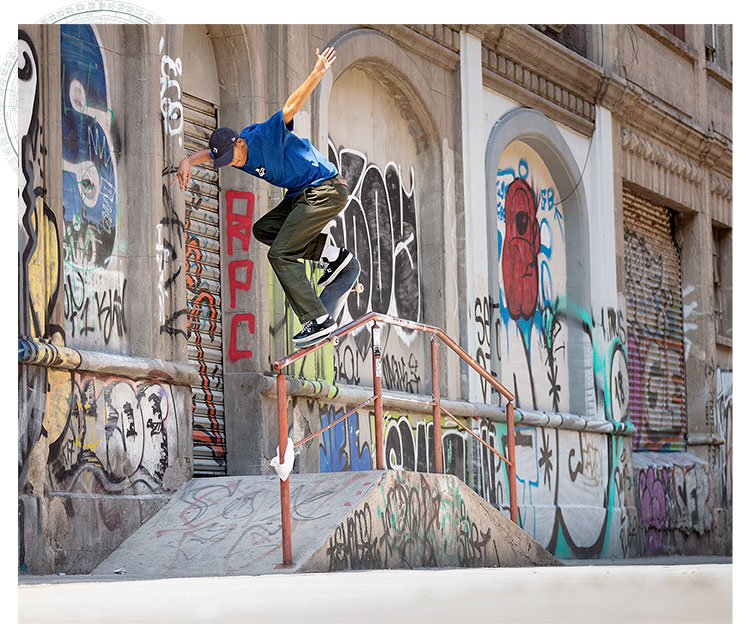 Our two drivers in MC turned out to be tour guides. You can imagine their bewilderment when we had them driving us around town to alleys and cutty spots. This rail was perfect but the run up had a harsh curve. Didn’t stop Louie from twisting into this backside overcrooks, though. It’s his dream; we’re just living in it 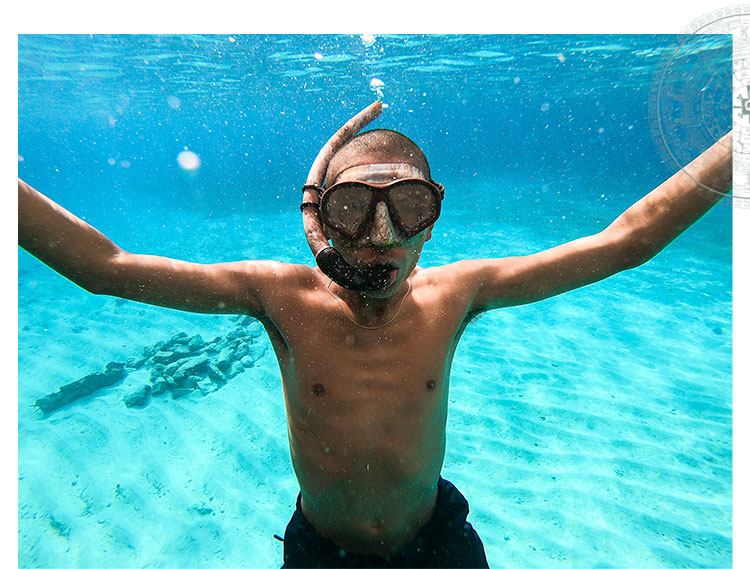 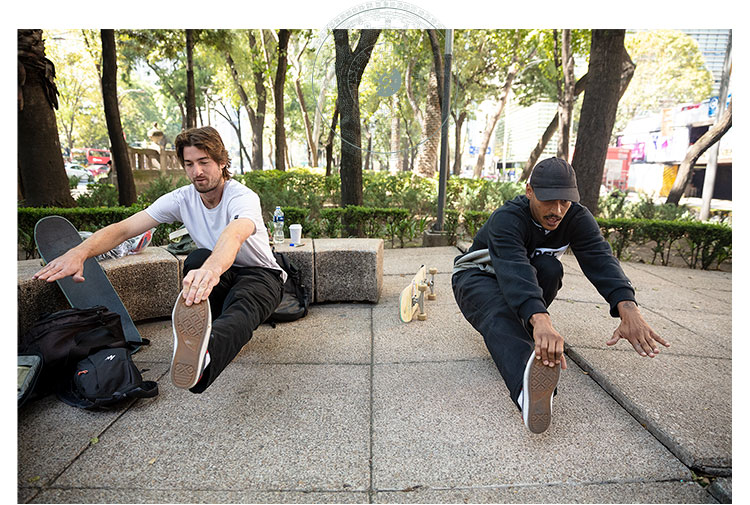 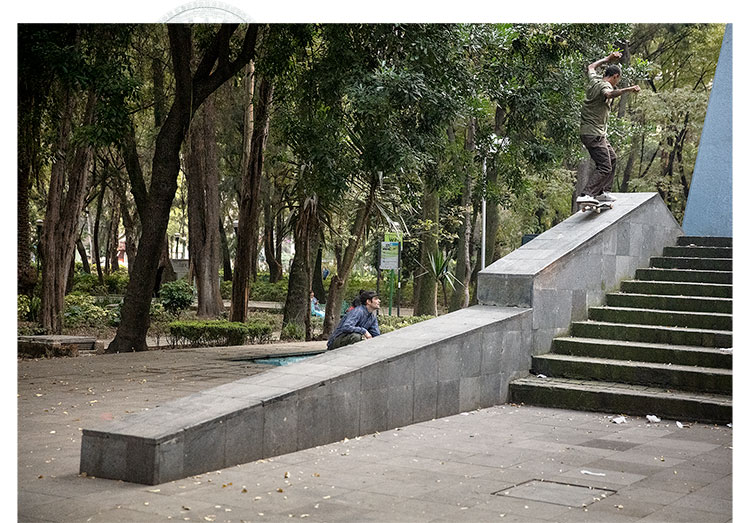 This hubba was so damn good but unfortunately the run up looked like a meteor slammed into it. Regardless, Kaue went to battle, charging through the cracks and grit, eventually claiming victory with this nose manual up 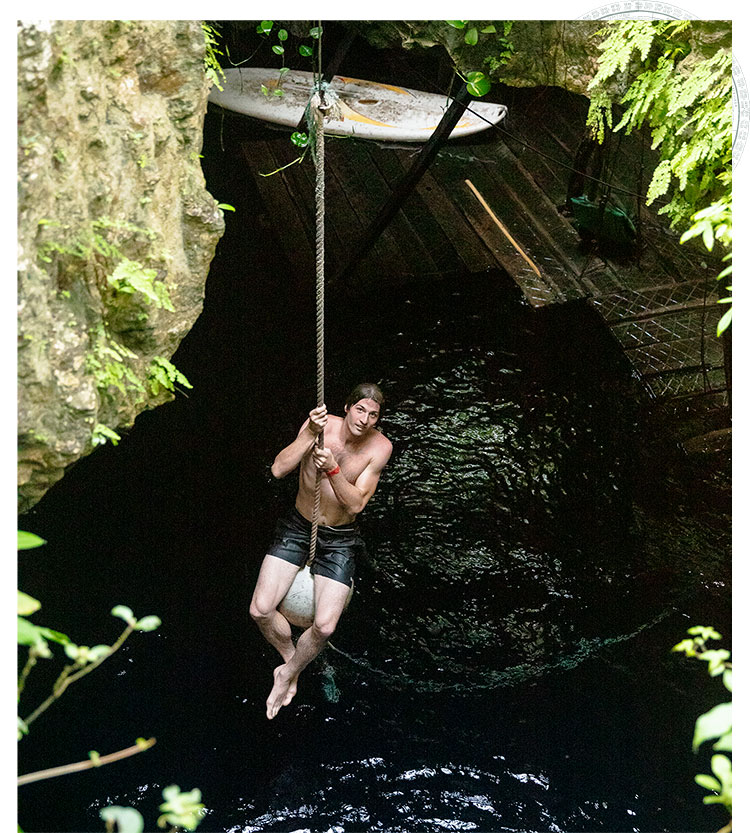  It’s always been Louie’s dream to get his own shoe and since this trip was celebrating that very achievement we let him plan his fantasy voyage. Coming off a previously successful filming mission for Purple he wanted to return to Mexico. Our plan was to meet our local guide Renol Cortes in Mexico City, fly to Merida and then take the honeymoon highway through Cancun, Playa del Carmen, Puerto Morelos, Tulum and Cozumel. Spring break forever—time to conjure up some chaos!
  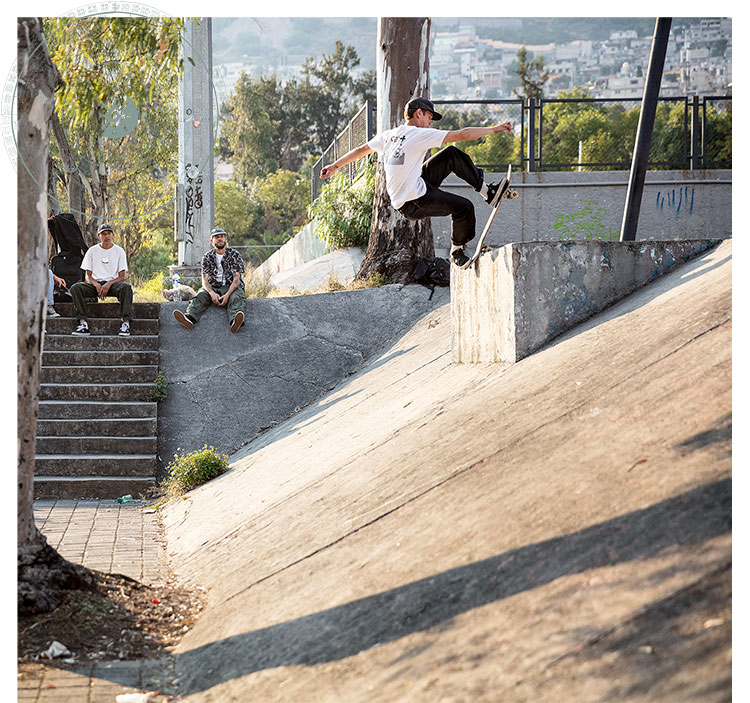 Traffic in Mexico City is horrendous and checking out a spot off the beaten path can potentially kill an entire day. We hit this sports center deep in the trenches and Raney made damn sure it was worth our time—front blunt
  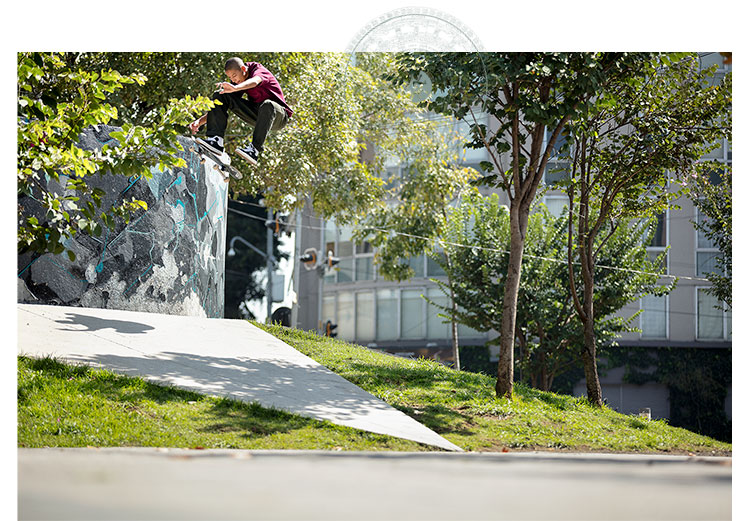 First day, first spot and Louie was skating like he was shot out of a GD cannon. While the rest of the crew was still lacing up their shoes, he was basting these massive kickflips over the hip, over and over again. You don’t get your own shoe by sitting on your ass, you know 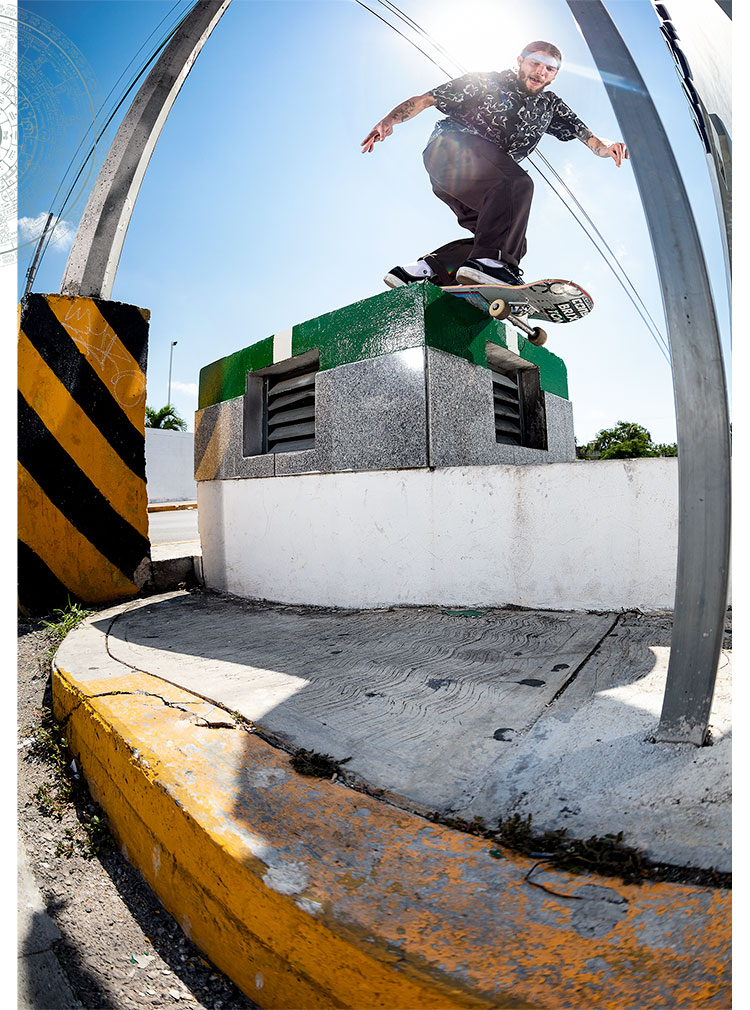 Born and bred in Miami, Dela was feeling right at home in the heart of Playa del Carmen—backside lipslide between the poles and into the street. Pop! 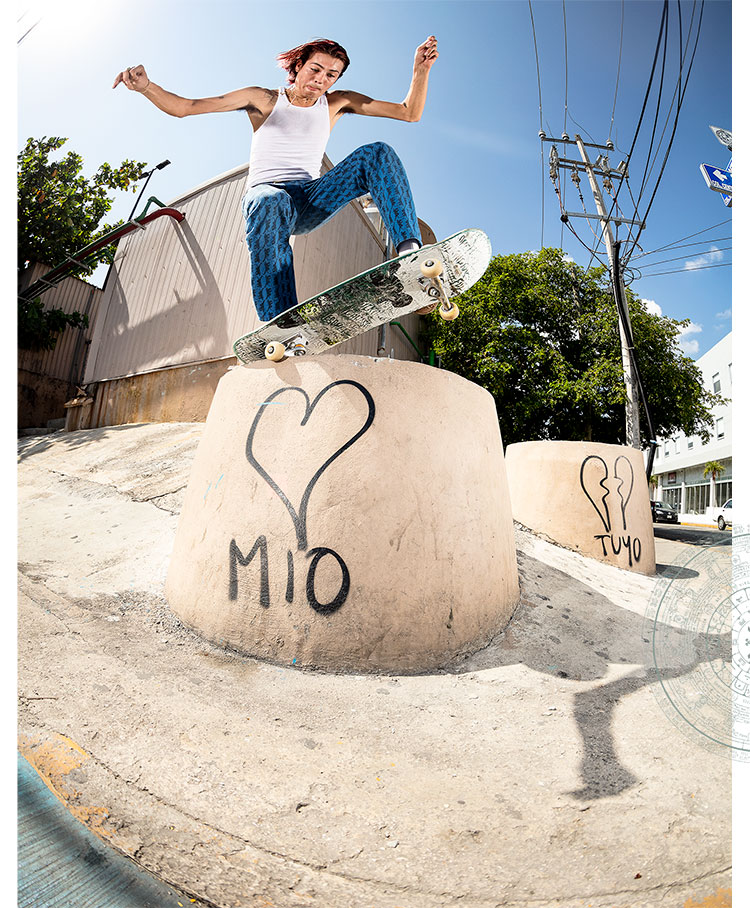 Sean was fresh off the Supreme deadline so for the duration of the trip he just had his eyes set on the crystal-clear waters of the Yucatan. When it finally came time to hit the beach, however, we stumbled upon this spot and it was too good to pass up—wallie backside 5-0 before the shoes came off. Insert some kinda heartbreaker joke here

The threat of altitude sickness in Mexico City, which stands around 7,382 feet, is very real. The best way to fight it is to stay hydrated—but that’s where the problem lies. MC is known for its sketchy water supply. Visitors are advised against eating anything that has been rinsed and drinking tap water is a definite no-no. Good luck remembering that when it’s time to brush your teeth after a night of partying! Renol became a human dispenser for the Treda pill, whose description is simply “Elimina la Diarrhea.” This unfortunately couldn’t prevent Ryan Lee from an emergency urban poop while he was in the middle of filming a line of Alexis. Hey, shit happens.
  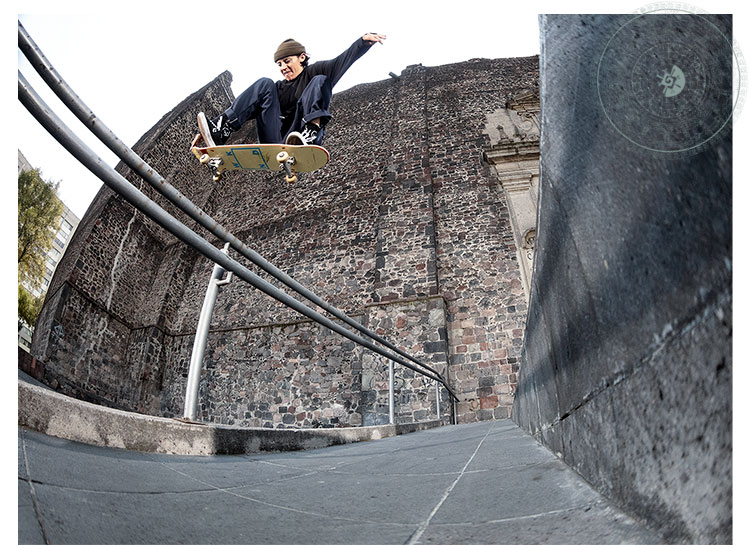 Built on the ruins of Aztec temples, Plaza de la Tres Culturas sits as the main square of the Tlatelolco neighborhood of Mexico City. Like many great plazas, it has some amazing spots combined with perfect flatground, making it a great place to start and end a day. Alexis kicks it off with a hefty heelflip 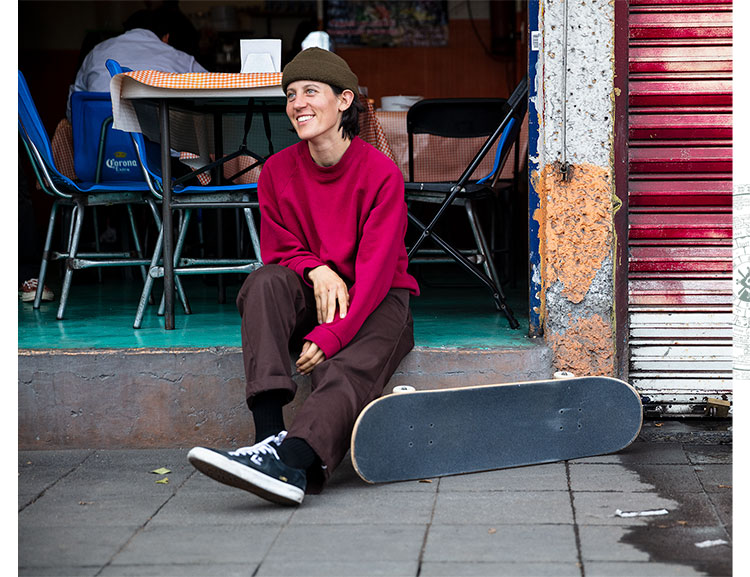 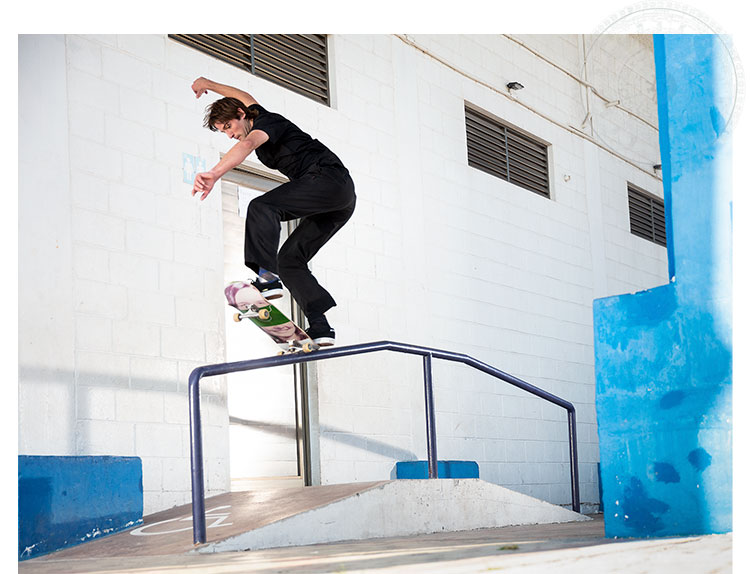 It’s inevitable that after traveling so much, most pro skateboarders will become jaded when it comes to spots. All too often they are brushed off because there’s a better version elsewhere in the world. But every so often the exact opposite happens, as was the case with this A-frame bump to rail in Playa del Carmen. The entire crew fell in love and wanted to get some. Jake fired this backside 5-0 onto a newly-formed and lengthy list of ABDs just as the cops rolled up to end the session 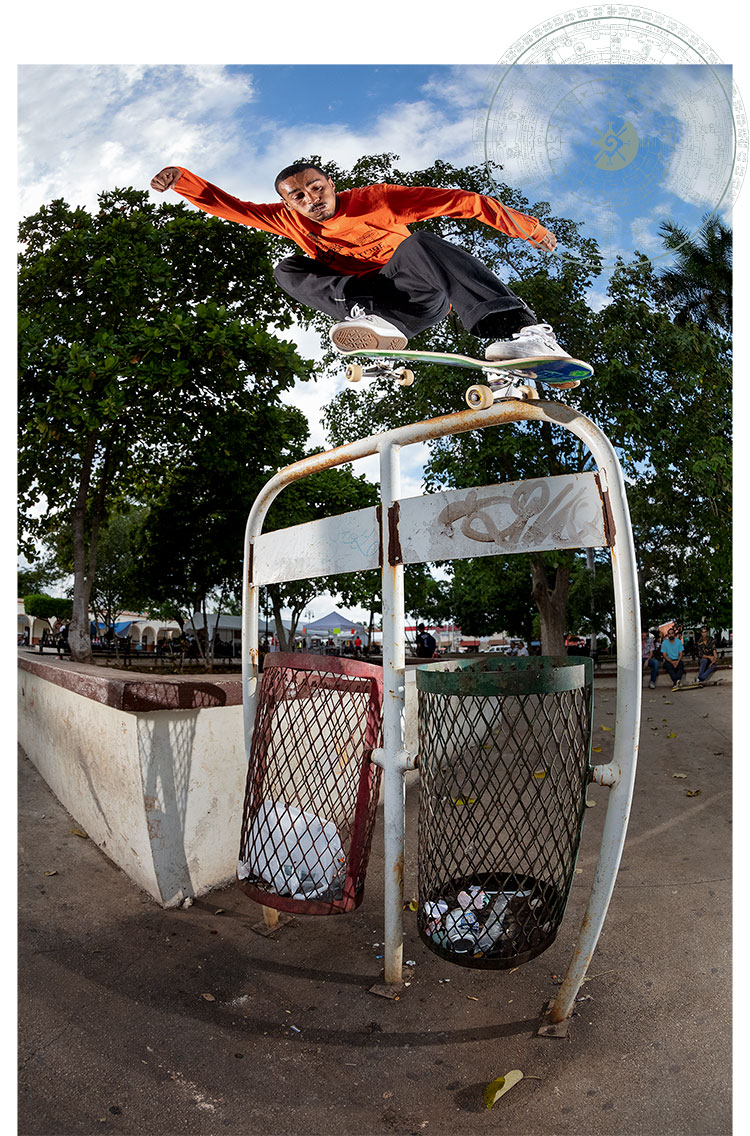 We skipped the ancient Mayan ruins of Mayapan and opted for the rusted trash bins of Mérida. Kaue’s backside nosegrind to fakie was definitely not trashy, though 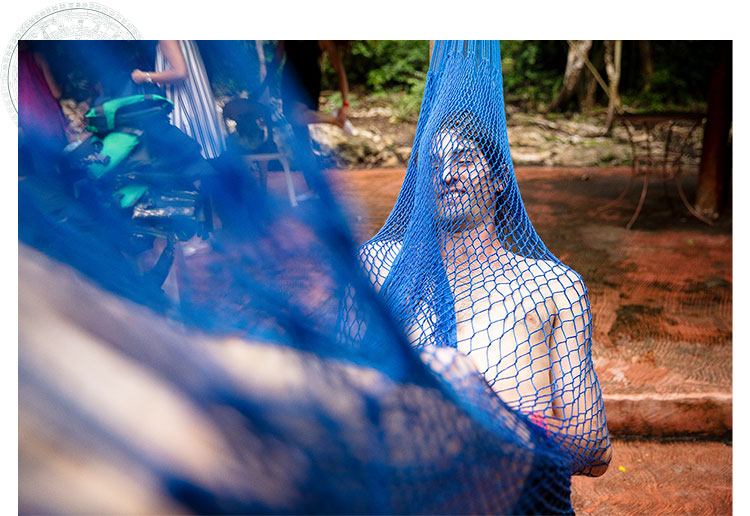 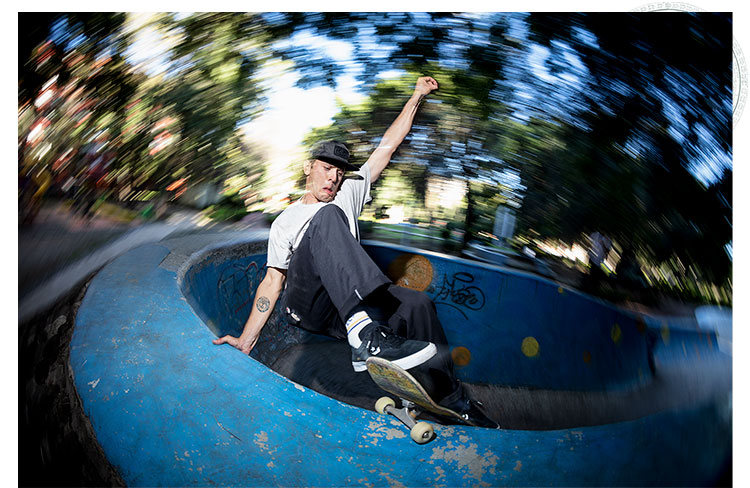 Of course he’s down to skate anything in front of him, but Raney’s mind was fixated on a fullpipe in the mountains on the outskirts of Mexico City. With little to go off besides a backside ollie photo of Marius from a previous Thrasher article, a few images from a Mexican skate blog and directions from a friend to “Go past the airport and then drive ten minutes past the OXXO,” Raney put the pieces together and on the last day in MC, he, Jake, Ryan Lee, Renol and I set off to find the mythical pipe in the hills. After playing hopscotch with a river, a quick hike and a quarter-mile walk towards the light at the end of the tunnel, we had arrived. The pipe was massive and rough as hell but that didn’t stop Raney from blasting some ollies and getting the highest marks to date. There’s something special about watching him skate in situations like this. It feels almost religious. You can feel his energy and you know there’s nowhere on Earth he’d rather be. Epic spots are out there, but they’re not going to come find you. Get some.
  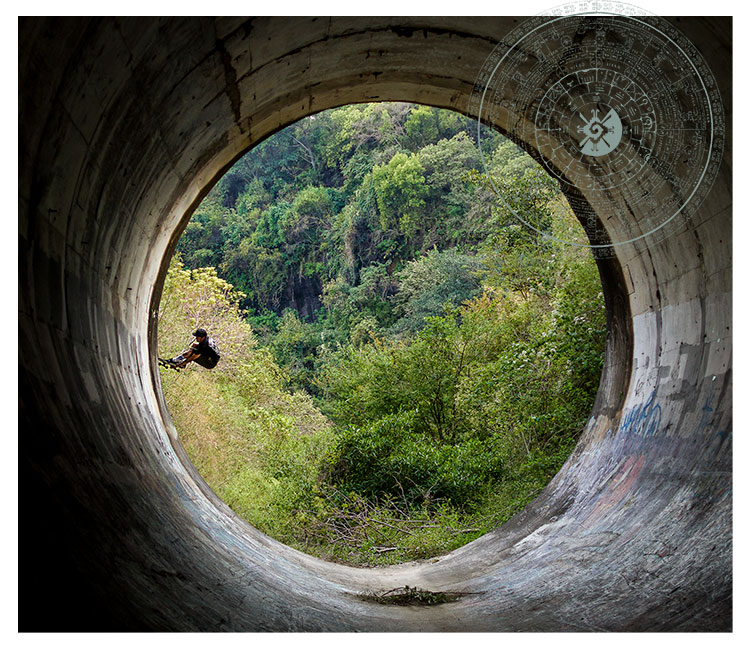 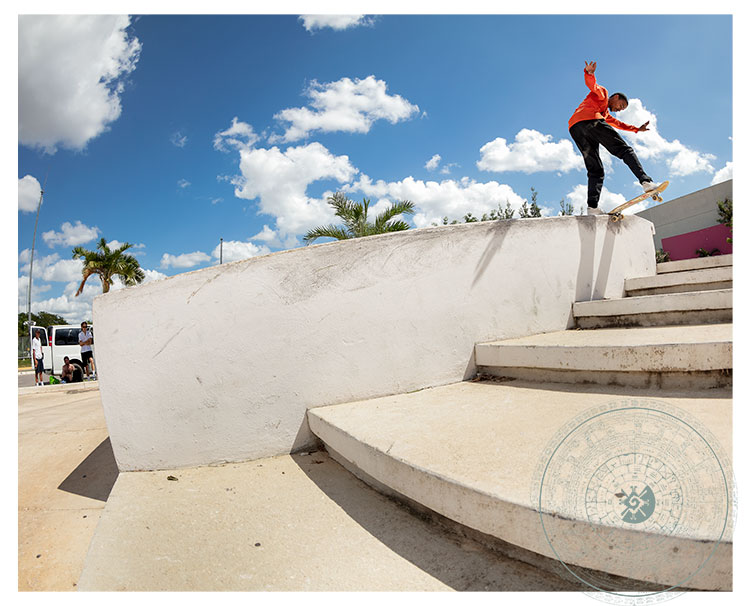 Nothing gets Kaue more hyped than a nice hotel room and an all-you-can eat breakfast buffet. Enjoyment of the amenities guaranteed he’d be last to the van every morning, but he always made up for it by always being the first one out. True to form, he landed this switch back tail before noon under the blazing Merida sun. It cost him a $20 bribe to the security guard, but at least breakfast was free 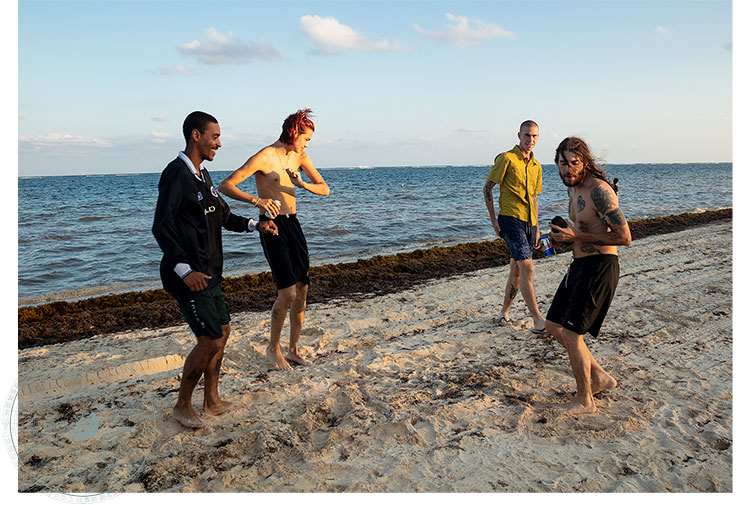 Louie had a dream, the crew made it happen and in the end we couldn’t have asked for more. Mexico is a beautiful country with welcoming locals who are eager to share a beer and their local skate scenes. When it’s all over, the altitude sickness, jail time and Montezuma’s revenge all became laughs of the past. May the enticing spell of Mexico never be broken! Oh, and congrats on the shoe, Lou. You deserve it, kid 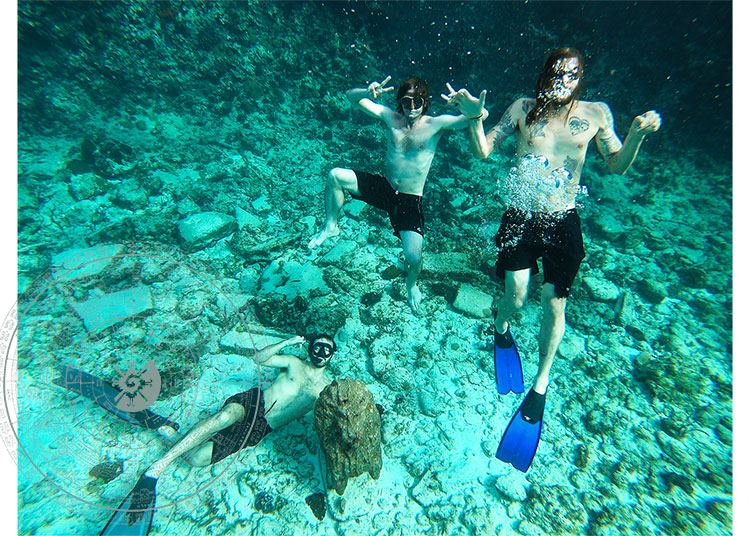 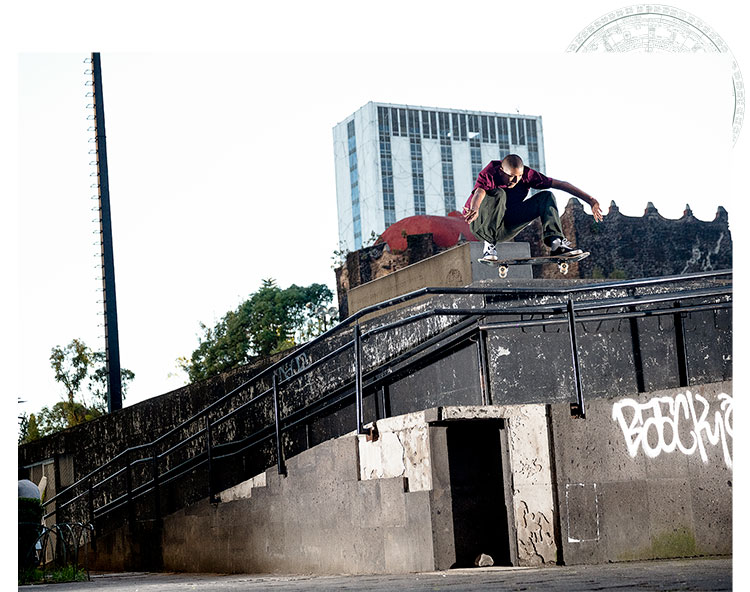 When the ramp’s that long you gotta take some extra pushes to clear the bar. Luckily, hauling ass is Louie’s specialty—massive frontside 180 on a virgin spot. Felicidades, Louie!