So how long have you guys known each other?
Dakota: Thirteen years.
Jaws: I think I was 11 or 12. You were like eight or something.
D: So fourteen years.

Were you skating then?
Both: Just started.

"I WAS OFF THE BLADES FOR A YEAR AT THAT TIME"

Or were you still on the blades?
D: I was off the blades for a year at that time. 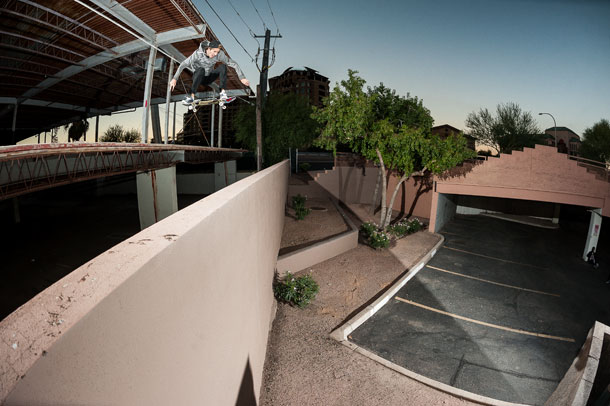 Jaws used to be on Chronic energy drink. Now he just has chronic back pain. Second-story power drop. Photo: Rhino

Did you scoot, Dakota?
D: A little bit but not really.

What are some of your earliest favorite memories of each other as little buddies?
J: Do you remember manualing the squares in the Larkspur basketball court?
D: Yeah, I remember.
J: You were, like, “How many squares can you manual? I can do four!” And I was, like, “I can’t do any.” That was the earliest memory I have of him, I feel like.

Was there any inkling that Jaws was gonna get as wild on the board as he does now? And were there any early rumblings that Dakota was gonna be such a daredevil on the rails and whatnot?
D: For Aaron, there was because his dad was always, like, super motivating for all of us. He’d be, like, “Yeah, you can jump off it. If you can’t get hurt doing it, why do it at all?” So Aaron was ollieing off of roofs when we were, like, little, little kids. Then I was just, like, “Yeah, Aaron, get it!”
J: And then I remember at Peoria skatepark you being the first person to grind the rail, and he was the first person I saw do a real handrail, too—the five-stair handrail at Gold Dust. 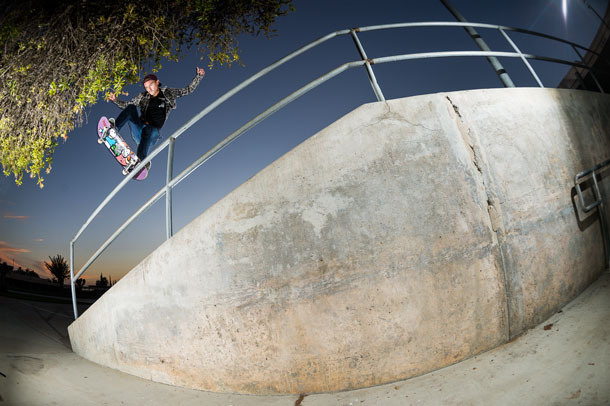 Dakota followed his dream all the way onto this gigantic front blunt fakie. Thanks Dad. Photo: Burnett

So were you guys competitive with each other as youngsters?
D: Kinda. I mean, I don’t know. He was.
J: Friendly competition, you know.
D: I guess we’d more like—push each other instead of, like, competitive style.

"WE BOTH SUCK AT FLATGROUND"

What about real sponsors, who got a real sponsor first?
D: Aaron.
J: No, I don’t think so. We won’t count Chronic energy drinks as a real sponsor.
D: I got on Toy Machine flow when I was twelve.

Were you already on the Chronic at twelve?
D: He was on the Chronic. I’m trying to think of when you got on Birdhouse.
J: It was after. You were first for sure.
D: ‘Cause I moved out to California so it was different.
J: Right.

When you guys would hear that the other guy was getting hooked up, would you get a little twinge of jealousy?
D: Nah.
J: I mean, no, I don’t think so. I think it’s not jealously but more feeling, like, “Oh, he can do it? Then I can do it, too.”

What’s an ability Jaws has that you wish you had on the board?
D: Better tranny. And ankles of steel.

What about you, Jaws? What does Dakota have that you wish you had?
J: Fuckin’ kinked rails, I guess. Getting kinky with it. I can’t really do kinked rails at all. And he has better pop than me. I see him ollie over stuff and I’m, like, “What the?!” 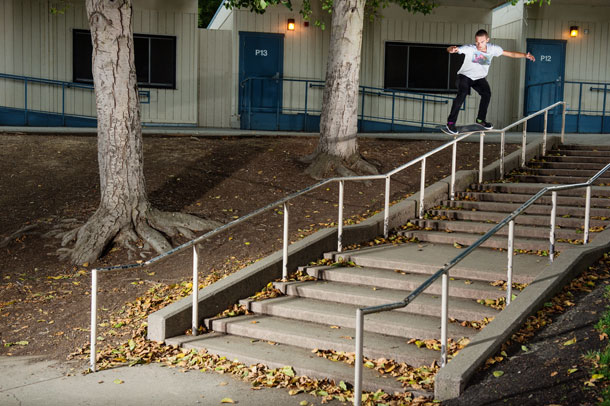 Who’s got better moves with the ladies?
D: Aaron for sure ‘cause he’s that demo king.
J: No.
D: I’ve seen you at the demos; you’re always the one making out with the chicks.

Have you ever pulled trim after a demo?
J: Not really.

But when the babes show up, the airs start blasting, right?
D: Oh, he’s blasting.
J: But he’s, like, way more direct with chicks. He’s, like, “I want you.” I’m more, like, “Let’s go do stuff.”
D: Aaron will never hurt them, so they like him more.
J: Whereas you’re like Mr. Dangerous.
D: I’m not that tight with chicks. 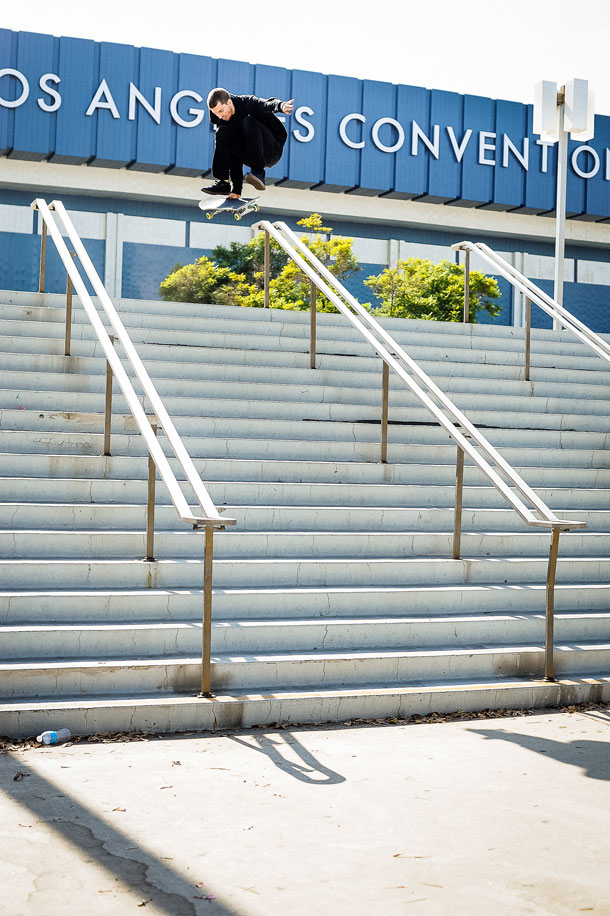 So Jaws’ dad was always really supportive and made you guys do stuff, but Dakota, your dad’s now a motivational speaker and he uses you in his speeches to his employees. Is that correct?
D: Yeah, something like that.

Tell me about it. What does he say?
D: He just says, like, follow your dreams and you can do anything, and just talks about how the world is different these days cause kids want to do stuff, like, now. For people who are older, it was like you had to plan it all out.

So what was the real-life lesson in your life that he took this from?
D: From when I dropped out of high school to be a skateboarder and how it all worked out for me.

That brings up something: which one of you is dumber?
J: He is.
D: He was in retard classes, too, but he finished high school so—
J: I wasn’t in retard classes. I just finished with straight Cs and Ds.
D: Aaron’s smarter for sure.
J: I feel like if they put a math test in front of us, I could beat you in a minute.
D: Math? 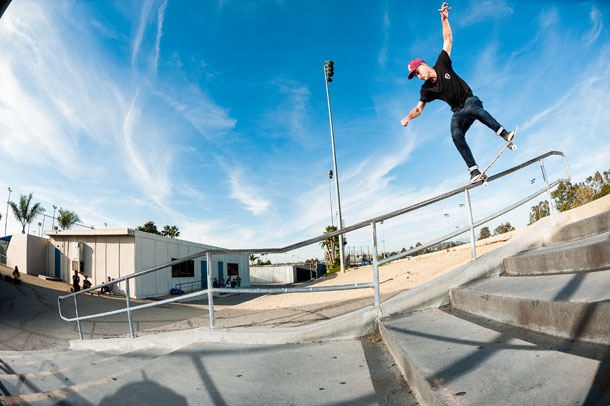 Dakota Servold on the crooked grind ride of his life! Photo: Rhino

Aaron, you’ve got drop smarts, but Dakota’s got dong smarts.
J: What does that mean?
D: Aaron’s smarter for sure.

Who’s more street smart then?
J: He might be a little bit more. He’s more life smart, I feel like.

Speaking of that, when did you guys bond over your love of psychedelics and robot music?
D: When we were little kids. Aaron was into it before anyone that we hang out with was even into it. 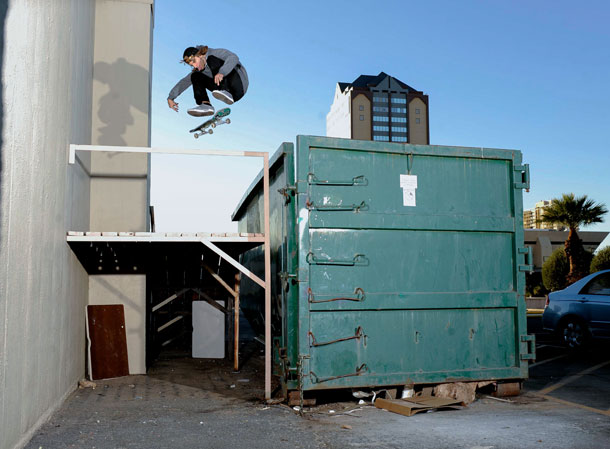 What was the first song that you bonded over? Was it “Firestarter?”
J: No. Orbital?
D: Yeah.
J: Orbital ”Halcyon + On + On.”
D: I remember that being one of the first things where I was, like, “What the hell is this kid listening to?” And then being, like, “This is actually pretty sick.”
J: It was in the Mortal Kombat movie. That song for sure changed the game of my music choice.
D: Then we all started getting into it, but at first we were all, like, punk kids being all, “We don’t listen to that shit!” But Aaron loved that kind of music, so eventually we were all, like, “Oh, that’s actually pretty sick.”

But you’ve said you wouldn’t use that kind of music for a skate video, right?
D: I would try. But yeah, no.

Too punishing to the viewer?
D: Yeah, I wouldn’t want to make people listen to it who aren’t into it.
J: I would want to use it in a skate video, but it would have to be edited exactly how I think of it.
D: You already skated to Dan Deacon.
J: Yeah, but I want straight techno. 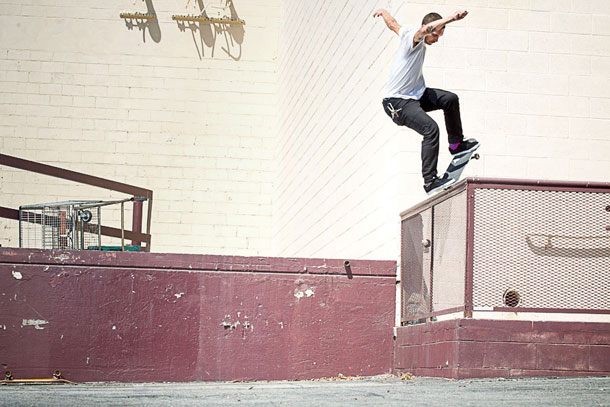 How crazy it is that you’re now both pro skaters on the same shoe team? Do you trip out on that ever?
D: Yeah.
J: For sure.

Well you were on the team first, Dakota, so when Jaws came around were you, like, “I dunno—maybe,”?
D: Nah, it was, like, I had talked to Sinclair about it a lot. I definitely had to talk to Aaron about it a lot before. He had to give up those Ipaths. I had to tell him that this was a better life choice for him and it took him a little bit.
J: I mean, I was jamming in my Ipaths.

So now you’re on this crazy ass team. Who’s the craziest fuckin’ dude on the team?
D: Burke or Merlino.
J: Everyone’s kinda crazy in their own way. Blake’s like—
D: He’s a psychopath.
J: Merlino’s, like, angry crazy. Then Pat Burke is like the drunk-like punk crazy, but we love ‘em.

If I had a choice to hang out with any of them I’d probably choose Patty B. Have you ever come close to physically harming Merlino?
D: No, but I’ve watched him harm people physically which is pretty tight. I’d never try to fight Nick because he’s got retard strength; he might kill me. I watched him choke out Marquis at Woodward. That was pretty fuckin’ funny. He choked him out in literally two seconds. 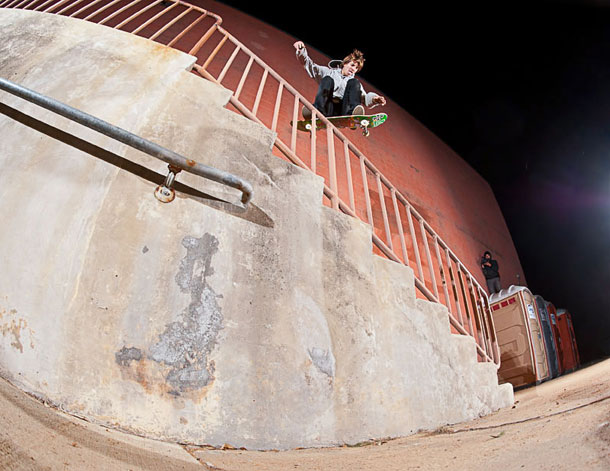 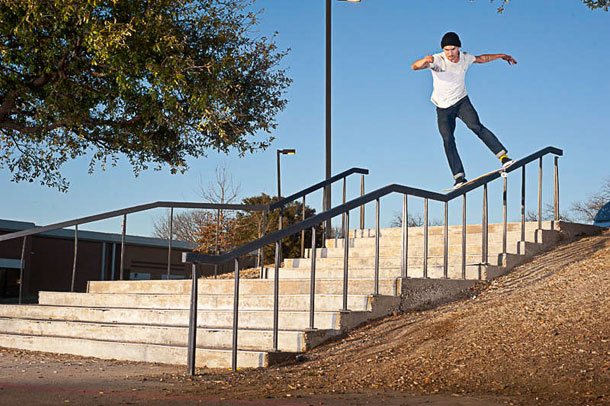 Hey, speaking of Blake, does he have any moves in this video that’ll make a kid shit his pants?
J: Wait for it, I guess. I don’t know.

Here’s a follow-up question, have you ever shit your pants while trying a trick?
D: I’m gonna go ahead and say that you have.
J: Nah, I don’t think I have. You?
D: Nah, just sacked the shit out of stuff and thought maybe blood was there. But nah.
J: Side story: I was riding on my brother’s shoulders and I sharted on him. Do you remember that? When we were playing at Larkspurs.
D: Remember when Louis puked on your brother’s head? That was fuckin’ tight.

Is True Blue gonna take out Plan B’s True?
J: Probably not. Fuckin’ Chris Joslin is just gonna win everything. Then Sinclair’s gonna be, like, “Dude, we need Chris Joslin on the team. Let’s get him on everything; he’s the best.” And then he’s gonna do to him what he did to me: tell him all the stuff—what to do—and then Chris is just gonna be Mike’s little prodigy child. It’s gonna be sick. I’m just gonna be yesterday’s news. Mike’s all about whatever’s hot. I’ll see him and ask, “What about me?” and he’ll be, like, “Nah, nah.”