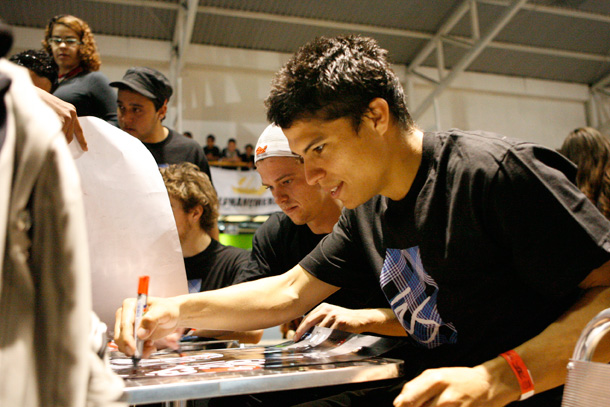 "So anything I said that night should've been disregarded immediately."

How often do you go to Disneyland?
On average, maybe once a month. A lot of people I know are starting to get annual passes so I've been going more lately.

How's living with Raymond?
It’s easy. He spends a lot of time iChatting with hundreds of people so I'm always well informed as to what’s going on in the world.

How was your recent trip to China?
It was alright. We were in Shenzen where it’s really good to skat,e but the language barrier makes it hard to go out or go sight seeing. We really just skated all day and hung around the hotel at night.

When you need to film for a video, do you prefer to get a crew together, or do you prefer more of a “just-you-and-the-filmer” scenario?
It matters. It's nice to have a good crew to go out with, it makes for a good time. But if I'm really trying to concentrate and film it's better for me to be on my own.

What's the deal with Fat Camp?
Jesus! I guess Brink gave you that piece of information. I had a two-week bender where I was eating cake and ice cream everyday, like a depressed Brian Wilson. So on an eS trip, these dudes started giving me shit for not ordering or eating any desert after dinners. I think they saw me making a serious effort to lay off the chocolate, so they started calling me fat camp. 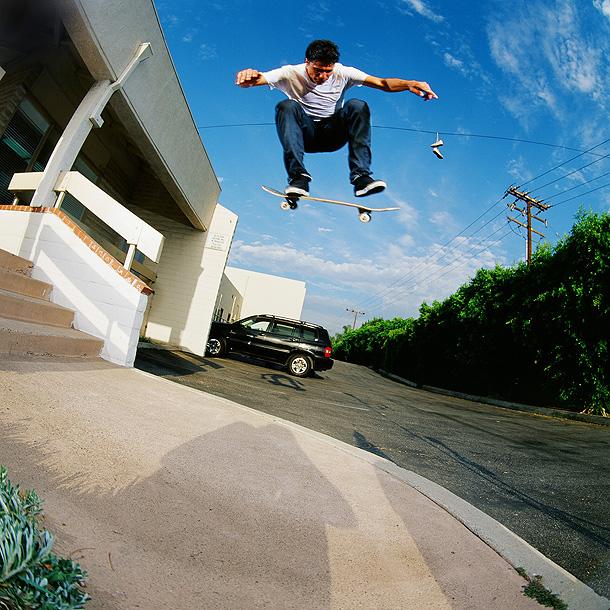 What the hell happened to you guys in Peru? How close were you to getting shot?
While we were skating a spot, a guy ran up on Mike Manzoori, pointed a gun in his face, and grabbed his camera. As he was about to jump in a getaway car, the guy did the same to Oliver Barton. As Oliver tried to grab his camera back they shot a couple of rounds into the air. I was a pretty good distance away. It happened so quickly I couldn't react, so I just stood there and watched everything unfold. I had the best seat in the house.

Top three things you must bring on every trip besides your skateboard?
I usually try to bring a guitar. Lately I've been bringing my computer, and of course some heavy psychedelics.

Favorite places that skateboarding has taken you?
I appreciate everywhere I go, but Central and South America would have to be my favorites—the food, the weather, the language, everything.

Favorite TV shows?
I like that show Locked Up. I just started getting into The Wire. Of course Arrested Development and Curb Your Enthusiasm are great.

Do you spend much time on the internet?
A little bit. I'll get up in the morning and check my email and stuff like that. If I have time I'll check some other sites.

What are the top three sites you check in on regularly?
Lately I’ve been checking TheOnion, Pitchforkmedia, and I always end up on YouTube. 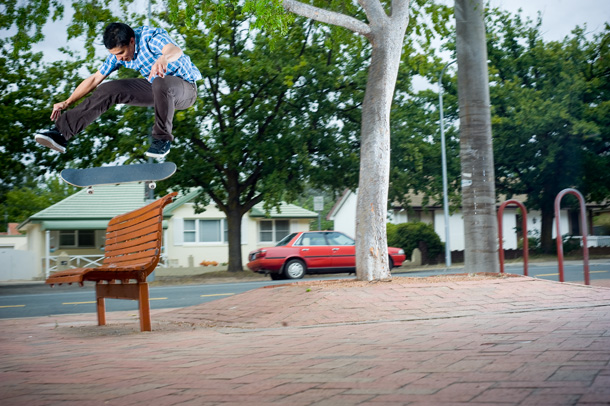 What do you think of Facebook and Twitter?
I get it. The idea of communicating with people from anywhere in the world is rad. It’s cool if you want to keep in touch with old friends and all that, but it usually ends up being a place where you go to spy on your ex. Or seeing what bars a friend of a friend has been frequenting.

Who do you think is going to win Battle of the Berrics 2?
I don’t know. One of the robots, maybe. I'll go with Paul Rodriguez.

Didn’t you tell Jake during KOTR that you were going to retire if you didn't get Skater Of The Year by 2010?
That was at the KOTR party, and not only had I been drinking, but I ate a weed brownie. So anything I said that night should've been disregarded immediately.

Could this be your year?
It’s been a good year so far, but no awards for me or anything.

Who do you think will contend for this year's SOTY?
If Leo Romero can nosegrind up a legit rail, then he should get it.