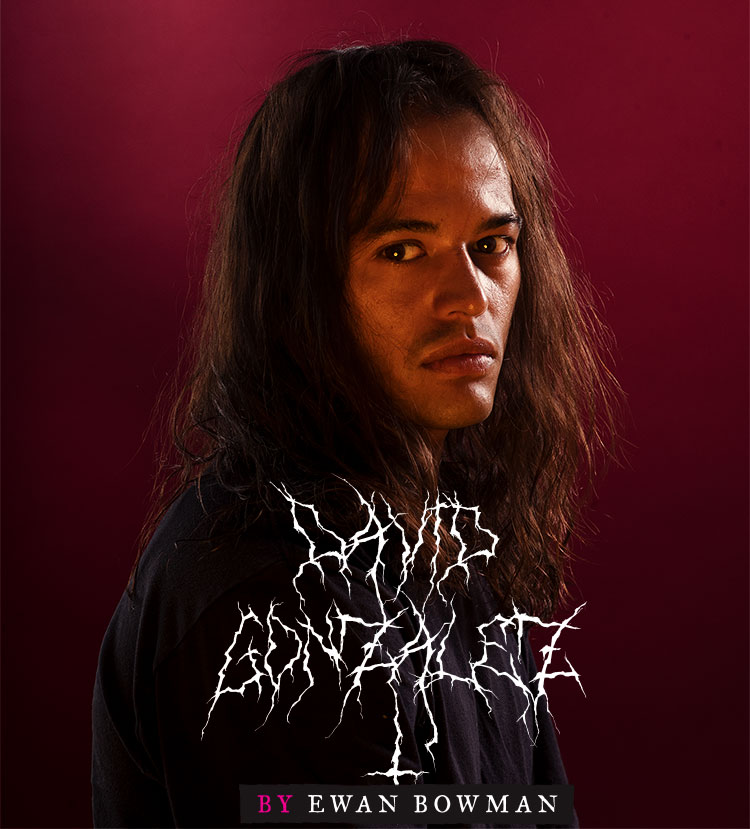 From Colombia’s pint-sized terrain terrorizer to Thrasher magazine’s SOTY to southern California’s six-string bending banshee outta hell, David has put his mind, body, and fingers through the ringer. It’s been seven years since his last drop of blood. Will his newest offering, Spirit in Black, be the last blast, the final solo, one last flash of the horns? Is he still Possessed to Skate or has his soul been repossessed by liquid energy? His fate, like all of ours, shall be determined by the Skate Gods. 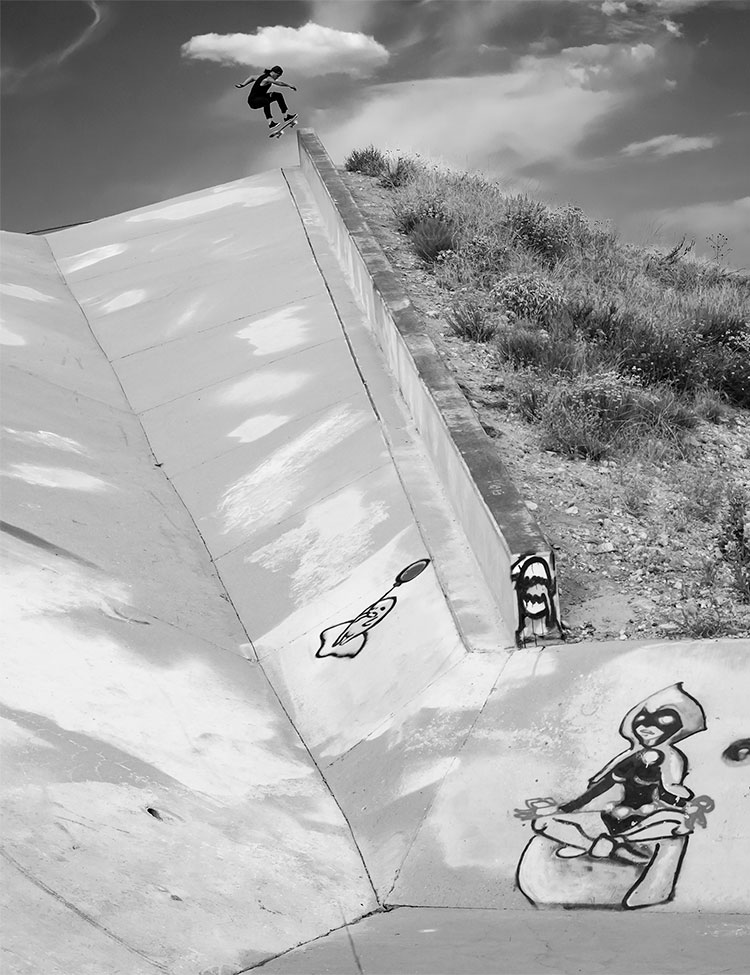 David skating ledges? Only if they’re on the side of a mountain. Kickflip lipslide, full speed ahead     Photo: Hammeke

This is your first interview, first video part in how long? When was Possessed to Skate, about seven years ago?

Yeah, seven years ago. The last good video part I had, yep.

So what’s changed in seven years?

A lot has changed in seven years. I’m 28 years old. Back then I was 21. I’m a grown-ass man now. I was a kid when I won SOTY. I have two dogs, my future wife, so a lot has changed. I’ve been skating strong again.

What happened? You disappeared for a little while.

I got hurt. I broke my left ankle again. I got surgery. It was a pretty gnarly injury. I got two plates, screws. I got back on the board after about nine months and it took me another two years to really feel good again.

So that slam really fucked with your confidence, right?

Oh, for sure. It took the good confidence out of me for a while. When I got back on the board I was, like, Fuck, I don’t feel as good as I want to feel. I was filming a video part for Volcom and I got hurt in Brazil. I fell super hard. It was in 2015. That took me out for a good seven months.

That was a gnarly one.

My elbow and my shoulder. Super bad. And my left wrist. It was harsh. I was pretty young when that happened and I think I took it pretty hard. I went into a weird depression. It took me a minute to come back from that. After a year or two, I went to Colombia, spent time with family, did all of this other stuff and then I started skating hard again.

During that time you spent a lot of time playing guitar, I hear.

During the time I was hurt I couldn’t skate the way I wanted to skate. I didn’t want to go out there. I started playing guitar and I got a band called RattBlack. We have an album and played a couple shows. It was fun playing music through the time that I was hurt. I learned a lot of shit from other stuff. 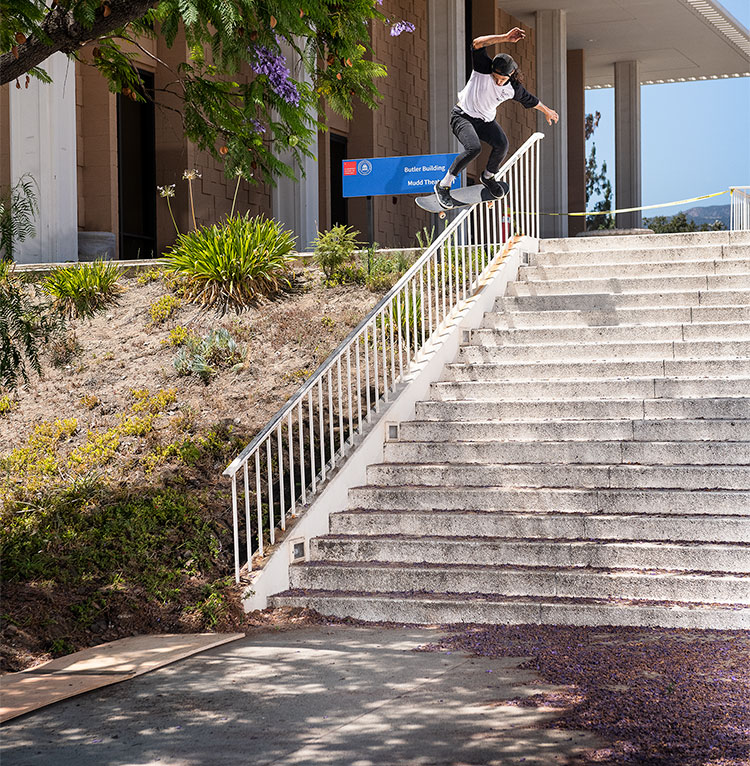 If you had to choose just one thing would it be skateboarding or guitar?

Skateboarding. There’s no doubt about it. Guitar is just what I do in my free time. It’s what I do for fun. Skateboarding is always going to be number one.

Do you feel 100 percent now, after all of the injuries and stuff?

If skating was done tomorrow, would you be stoked on your career?

I would be so stoked. I can’t complain. I come from a pretty rough town. I come from this town outside of the city of Medellin. It’s pretty damn hood. Coming from there to where I am now, I am completely blessed. Whatever I go through in life, I’m blessed to be where I am now. I’m pretty hyped. I can’t complain. I started skating for fun in a neighborhood where the neighbors knew nothing. I didn’t have any money. I ended up here. I got Skater of the Year, I got sponsored, I got a nice house, I have my family so I’m pretty stoked.

Did you ever imagine when you were 13 in Medellin that you would have a fucking house in suburban Long Beach with a pool? 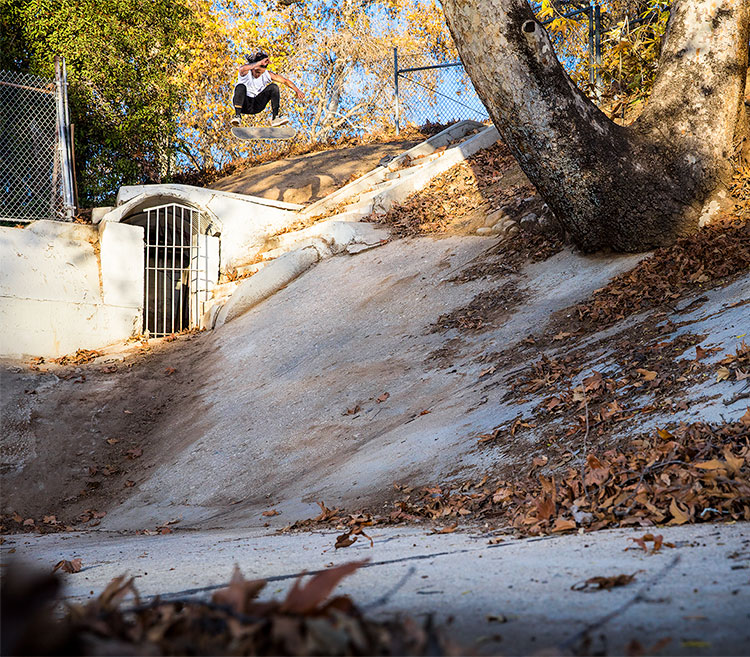 Did you ever imagine you would have a blow-up flamingo in there?

So the entire time of you being pro and getting paid you’re helping your family?

The whole time I’ve been getting paid, I’ve been sending money to my mom—for the past 18 years. My whole thing growing up was to help my mom and help my family. We didn’t have nothing. We didn’t have shit. My dad was a crazy alcoholic drug addict.

Is this your last video part?

Definitely not. This is the start of my new era, dude. A new chapter. I feel really good on the board again. I feel strong. I’m healthy. 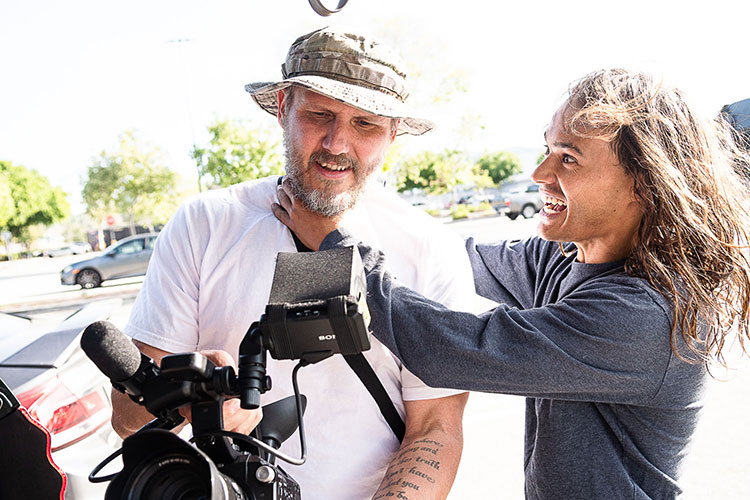 Probably working out really hard because I like doing it. It helps me to skate and be in good shape. I’m going to film another part for Flip, one for Rockstar. I’m just going to keep putting video parts out. I’m probably going to start doing contests again. I just got invited to Street League. I got invited to the Olympics, so I might be going to the Olympics.

Is that something that you really want to do? Do you care about the Olympics?

I would actually love to do it. For me, to represent Colombia means a lot. If I get to represent where I’m from, I’m down 100 percent.

I heard Shaun White is going to win all of the Olympics—the tranny section, the Street League section. I heard he’s coming for everyone. He’s gonna do it. Watch out, everybody. Nyjah doesn’t stand a chance when Shaun White gets all 11s, dude. Who’s your favorite guitarist?

My favorite guitarists are going to be Angus Young from AC/DC, Tony Iommi from Black Sabbath, Kirk Hammett from Metallica and Zakk Wylde from Ozzy Osbourne. Oh, and Adrian Smith from Iron Maiden. Those are my guys. Everything I do at a show or on my guitar is because of them. I learned all the techniques from them.

Front tail revert over the light and box, looks like the mini ramp paid off     Sequence: Hammeke

Who are your favorite skaters? Who gets you stoked now and who are some skaters that got you stoked as a kid?

John Cardiel, of course. It’s John Cardiel. He was the motivation when I was growing up. Arto, Geoff. I was a fan of Tony Hawk and Hosoi. But nowadays, Jamie Foy, for sure. I really like how Nyjah skates. Luan hypes it up really hard. Cory Juneau is who I like watching before I go skate.

What’s your favorite terrain to skate these days?

I was skating a little more transition a couple years ago. In the last year I’ve been street skating more—whatever’s out there on the street. 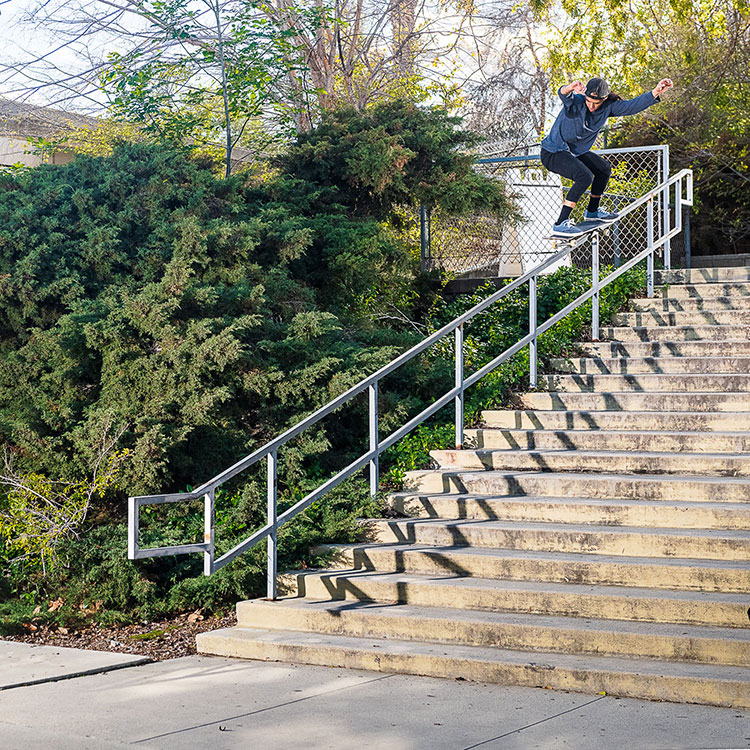 If you had to pick one, the devil horns, the shaka or the middle finger—if you could only choose one for the rest of your life, which hand signal are you going to choose?

How many times do you think you have flashed the horns in your life?

I have to ask, what the fuck is going on with your pants, dude? Those pants are so tight. What are you doing?

I have to get a jeans sponsor, dude. I don’t have a fucking clothing sponsor. I keep finding these jeans that are good but not that good.

I don’t have a clothing sponsor and I keep buying these shitty jeans. I think they fit me but then they kind of fit me for skating. They don’t look that good.

You need somebody to help you dress because it looks like you can’t figure it out.

I think so. I think I need a personal designer. Everyone’s like, “Damn, he needs to figure out his pants.”

Do you think since this is a new era of David Gonzalez, are you going to have a makeover? Are you going to cut your hair and get a t-shirt that fits?

Oh, hell no! I like my shit. I like making my own breakfast, my own lunch, my own dinner.

Do you like skating as much now as when you were a kid?

The passion hasn’t gone away. It’s only getting stronger. Right now I almost feel like how I was when I was a kid. I feel like I want to go skate all the time. I feel really good. I wasn’t feeling like this four or five years ago. I was not that motivated to skate.

Do you think you would ever move back to Colombia? Or will you live in America forever?

I’m just going to keep skating and see what happens. I’m just trying to get out there and do what I’m good at and that’s it. 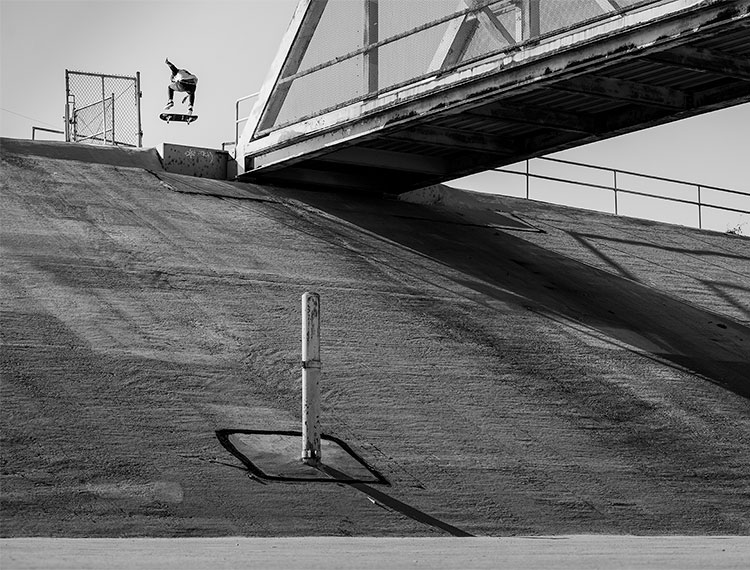 His pants may need some work but his switch backside flips are on point     Photo: Papke

Are you focusing solely on skating? You’re not trying to be in a band anymore?

What does a normal day consists of for you?

I wake up around 7 AM, I make breakfast, get my coffee going. It’s the first thing—without a coffee, forget about it. Work out for an hour.

Do you work out the devil horns, too?

Just going crazy, having fun in the backyard for an hour. Skate for two or three hours. Shoot a clip for Instagram or whatever.

I think they’re both important. Of course the video parts are more important because of the photos that get put out in a magazine and on a website. But it’s pretty important to have your consistent social media or Instagram going. It’s another platform to get you going, basically. I like doing Instagram clips because it’s fun. I do it for fun and I do it for me too. 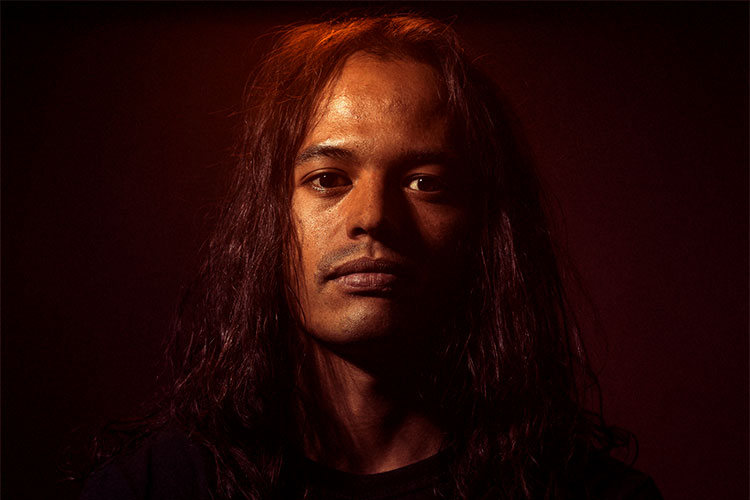 What does it mean to get photos in Thrasher?

You’ll be able to keep the magazine forever and when you’re 65 you can pull that out and show it to your kids.

Of course. I have all the Thrashers I’ve been in with me. All of the covers. It feels really good to have photos in Thrasher mag.

It’s always going to be important to be in a magazine.

If you want to make it for real, go out and film some shit. It’s really important. Video parts, and having an interview before the video part drops. I think Thrasher magazine is the right way to do it.

Do you have any last things to tell the kids?

For anyone out there who wants to be a pro skater—anything’s possible. Keep following your dreams. If you work hard you’ll get there.

Since I’ve been filming this video part, the whole time I was like, “I want to kickflip backside 50-50 El Toro at the end of the part.” I wanted to go for a banger. The video was almost done, I went to try and the first time I went I got pretty close. I had one where I grinded just a little bit and I lost my balance. I had two good slams and after the second one I was like, “Dude, let’s come back. I can’t do it today.” We came back a month-and-a-half later. I tried the second time but my confidence wasn’t really there. I was distracted, I couldn’t really commit to it. I know I can do it now.

If you do that you’ll get a new clothing sponsor and you wont have to wear those crazy fuckin’ tight jeans anymore.

You’re out of your mind. 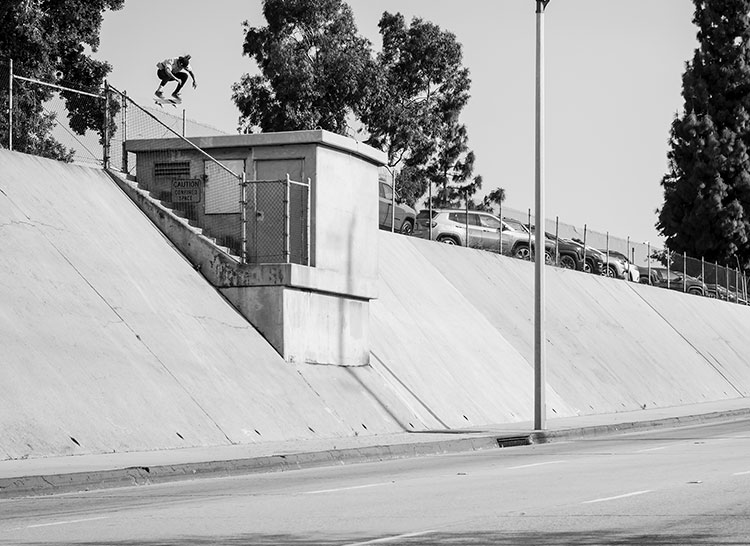 Caution is right! Kickflip into the bank on the way to El Toro. Welcome back, Gonzalez!      Photo: Hammeke