I first met David Gravette in 2005 on a Creature summer tour. We were skating Arlington Skatepark in WA and David was there—just a scrawny little kid charging around the bowl. That same day he did an insane ollie into the deep end and I shot a sequence of it. Somehow the photos ended up running in the Creature tour article in the mag. Navarette had since gotten ahold of David’s sponsor-me tape and decided he might as well put the kid on the team since he was already getting coverage for them. That was almost ten years ago and despite Gravette seemingly being injured ever since, he’s still managed to put out some heavy-duty skateboarding. With his new shoe on C1rca about to drop, we thought we’d hit him up and see what he’s been up to lately. —Joe Hammeke

So it looks like C1rca has really been making some moves this past year.
Yeah, this past year with C1rca had the potential to be the funnest year for me, but I was injured for most of it. The team gets to film stuff at cool skateparks, go cliff jumping—all this fun stuff which was impossible for me to do with my arm in a sling. But I still managed to figure out other ways of being entertaining: drinking a gallon of milk on the beach; that was a good one.

Who came up with the idea for the C1rca House?
That was Shokus’ idea. He thought it would be cool to rent a house for the team and have Lannie Rhoades, our filmer, live there to document stuff. That really brought the team together, small-world style. Shokus’ unfortunate passing definitely shook things up. Now we have Mario Miller taking over Shokus’ role, and it’s really a tight group of friends over there for me. When I first came to California, almost 10 years ago, I stayed at Lannie’s house for, like, a month or two. So it’s pretty crazy for it all to come full circle. Those were some damn fun times.

You’ve been on Creature since you were 17. Have you ever had a job?
I was a paperboy from age ten to 14. Then I worked at the skatepark. I was still working there when I was fully riding for Creature, but they were very lenient with me. I would constantly leave work early and or not show up. I was a terrible employee. I think the other employees were disgruntled because it seemed like I couldn’t get fired. I fucked up a lot of times. There were a big group of kids that the management thought were coming to the skatepark because of me.

Why do you think the kids at the park or at demos gravitate towards you?
I very clearly remember when I was younger we didn’t have pros coming around all the time, so when they did come around, whatever they did really stuck. I definitely do not think I have an ego or am some sort of superstar, so when a kid comes up to me and just starts talking to me, I’m gonna have a real conversation with him. 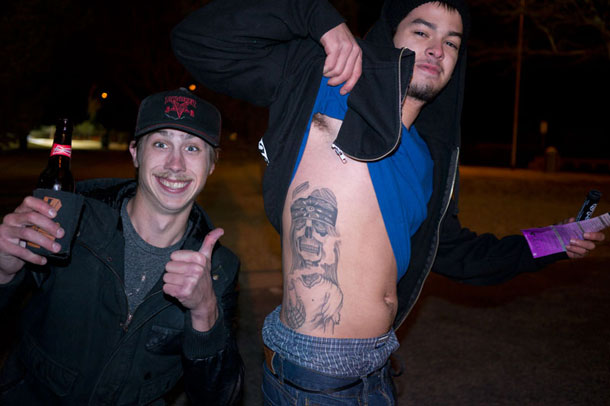 Alright then how about a few stories about some of the bigger handrails you’ve ever 50-50’d. 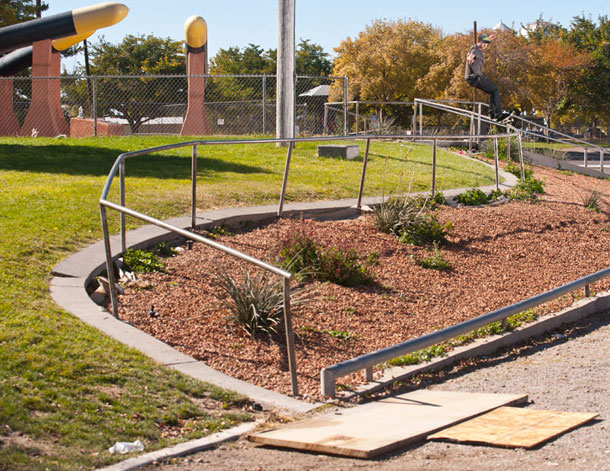 1. Long curved rail in Albuquerque.
This day started off with us going to the Bullhead rail in Albuquerque—the famous curved one that everyone skates. It was going to be the first spot we were going to look at and suss it out to maybe come back and skate later. I got excited when I saw this long rail over to the side. I figured I was gonna jump on it a few times to see if it was possible and then we would come back. Right away I got three quarters of the way down, so we decided to stay, but hours later I still hadn’t made it any further. We burned through two sets of batteries in the speaker, got laughed at by football players and then I finally made it all the way down. But when I landed, my wheels broke through the wood on the landing. I pathetically dropped to the ground and had to start over. By this point I was yelling at the football players; I was getting very angry. It was one of those times where if someone came to kick me out, there was no telling what I would do. Maybe I would try to kill them. It was now getting dark and we were still at the first spot of the day. But it finally worked out and afterwards we went back to Palmer’s and had some really refreshing beverages.

2. KOTR rail, chugging a beer
That was actually a good time. It was an ABD, but it was King of the Road and it would be good for longest rail. Not trying to downplay the rail at all but it was really easy to get on. So I grinded it really quick and not wanting the session to end I decided to do some shenanigans on the rail. That’s when I grabbed a beer and chugged it while grinding down it again.

3  Prevent This Tragedy part ender
The runway on this one was ghetto as fuck. It wasn’t very comfortable grinding the twelve-stair at the top before the flat. But the one I made, I knew I was locked in and that was gonna be it. Sometimes you start thinking weird shit; this was one of those times. I was really locked in and had time to think. I was wondering if I should kickflip out, but I decided to just ride it out on the first one. Then I tried it about ten more times and didn’t get the kickflip. I stopped before I got to the point of having a mental breakdown. 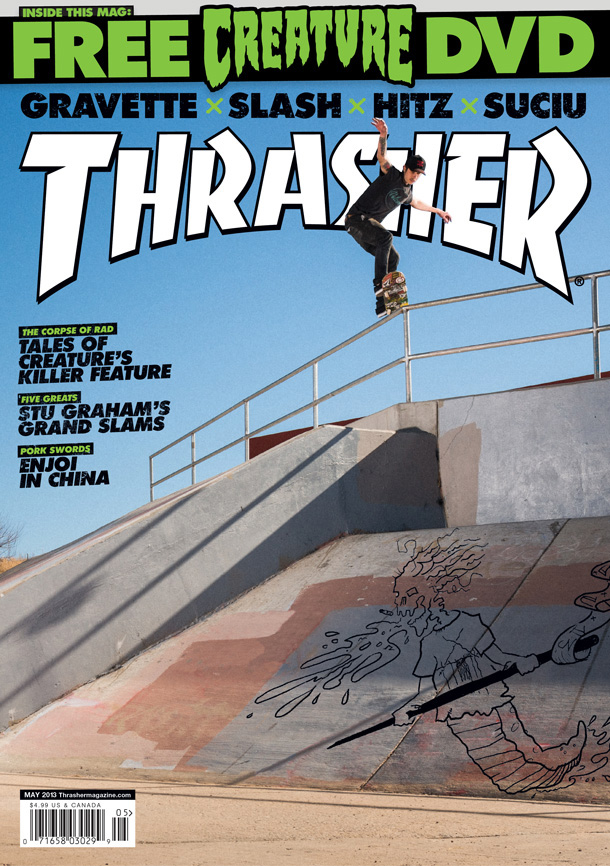 4  Thrasher May 2013 cover rail
This was one of those funny-how-the-world-works situations. We were at a skatepark warming up and our tour guide Rocky told us to check out the ditch on the other side of the parking lot. The kink at the bottom of the bank was a little rough, so Jake Johnson (the one from Albuquerque) bondo’d the bottom of the bank. The next day I went back ready for battle. But knowing you are going to a battle is pretty scary. It really sucks. It’s really nerve racking. There was definitely some freaking out because I was terrified. But turns out, nothing really went wrong. It was definitely one of the best days of skateboarding for me. It felt pretty damn good rolling away. I made the second one that I took off the end. I can’t wait to be fully healed and have more days like that. If my memories flash before my eyes right before I die, that will be one of ‘em.


5  Long kinker in Florida.
That school had tons of stuff to skate. We were on a Creature trip to Tampa with all the homies. Everyone was skating around the entire zone, hitting everything.  The rail looked really good on our way to Tampa but it was raining, so we decided to skate it on the way back. So that was a bit stressful. Any time you have to wait to skate something gnarly, it sucks. It had really good run up and the top part was perfect. At the very end of the rail there’s a ledge, so you gotta ollie out early. The top part was easy. Turning the corner was really scary, though. When I did it, I remember making it to the end of the rail four or five times, but my feet were not in the right place. The first one that I had the right footing on, I ollied out to the flat and got wheelbite. I remember when I finally landed it “Holy Diver” was playing on the radio.

After the 50-50, what’s your go-to trick?
That always varies. It’s seriously been every trick. For awhile that it was Smith grinds, then lipslides. Right now it’s 5-0s. It’s been crooked grinds, nose grinds. Front feebles are never in there. 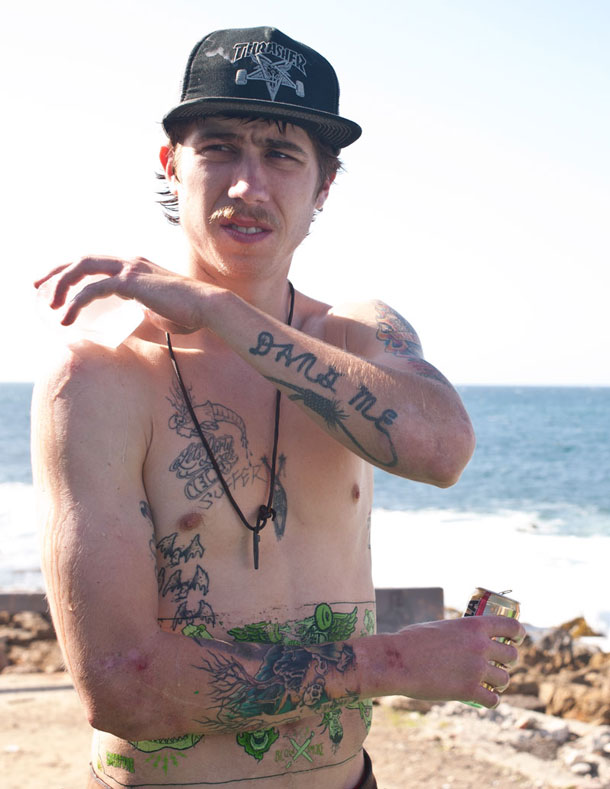 We all know you skate gnarly shit, but it seems like your injuries happen randomly.
Most of my injuries aren’t skateboard related at all. It’s all bullshit that happens off the board. I think ever since I was a kid I’ve been accident-prone. When I was in elementary school I went camping with my friend and shot a blow dart through my foot, got way too close to a moose and almost picked up a rattle snake. His mom told me she couldn’t take me camping anymore.

Most kids would avoid all snakes in the wild yet you found a rattlesnake?
Yeah, I just grabbed it by the tail and pulled it back on to the trail. At the risk of making a gay comment, I love to grab snakes. I’ve always had a thing for reptiles.

So what’s the story about getting stem-cell injections in your hip?
Without boring everyone with the medical terminology for my injuries, basically my doctor told me that my hips are like a 60-year-old’s. I could get a hip replacement, but instead I’m getting stem-cell injections. And here’s the plug: Dr. Rahul Desai in Portland, OR, is the guy to go to. The perks of being a professional skateboarder are that he hooked it up for free in exchange for stories about it, since I’m likely to know lots of other people who are on the injured list.  So if anyone out there is dealing with some plaguing injuries, maybe check out stem cell injections and Dr. Rahul Desai. It’s the future of surgeries. That probably needs to be re-explained by someone who isn’t a fuckin’ idiot. This is my hangover day. My brain is not up to par. 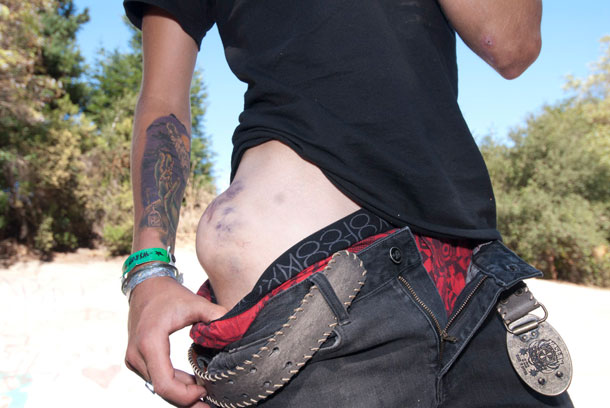 So you got a new shoe on C1rca?
Correct. It’s called The Goliath. I was trying to think of something that goes with David.  You try and come up with a name for a shoe; it’s kinda weird. I tried to name it just Shoe. You know, like, Gravette’s Shoe model. So yeah, the David and Goliath gimmick. It looks really good. I have not skated in it yet, but I have trampoline boarded in it and it’s really good for that. I got a trampoline so I can bounce on a skateboard deck. I can do that with my arm being hurt right now and it’s pretty damn fun. 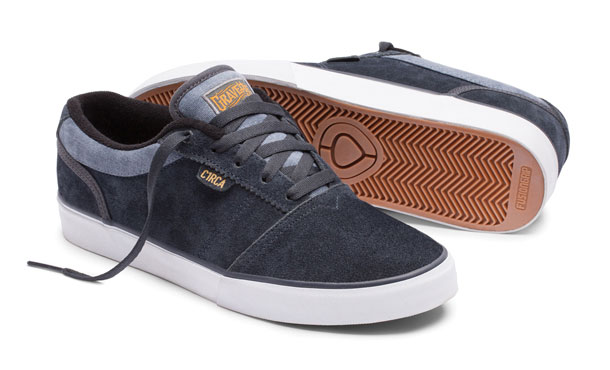 When does your shoe come out?
I wanna say February but I could be wrong.