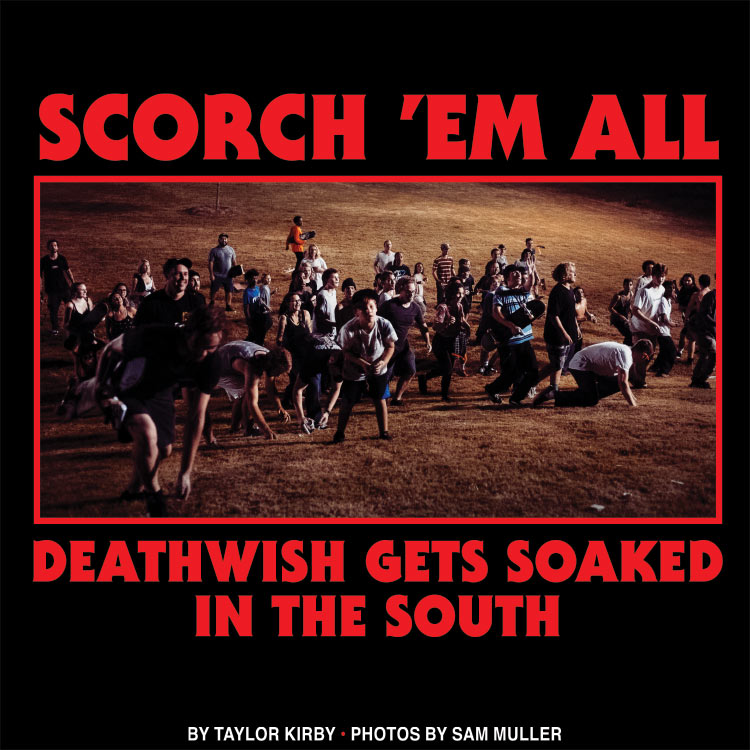 Welcome to Florida! A beautiful place where you step out of the airport onto the sidewalk and immediately regret leaving the air-conditioned baggage claim. We’re talkin’ 90 degrees with 90-percent humidity at midnight. Yeah, it’s like living in a jacuzzi 24/7. Okay, it’s not that bad, but even some locals asked us, “Why the hell did you guys choose Florida for a tour?” Having three FL natives on the team, die-hard fans and an endless supply of bent metal, we knew why we were there. With weed recently decriminalized in the state and full smoking coverage on the van, the trip was on. 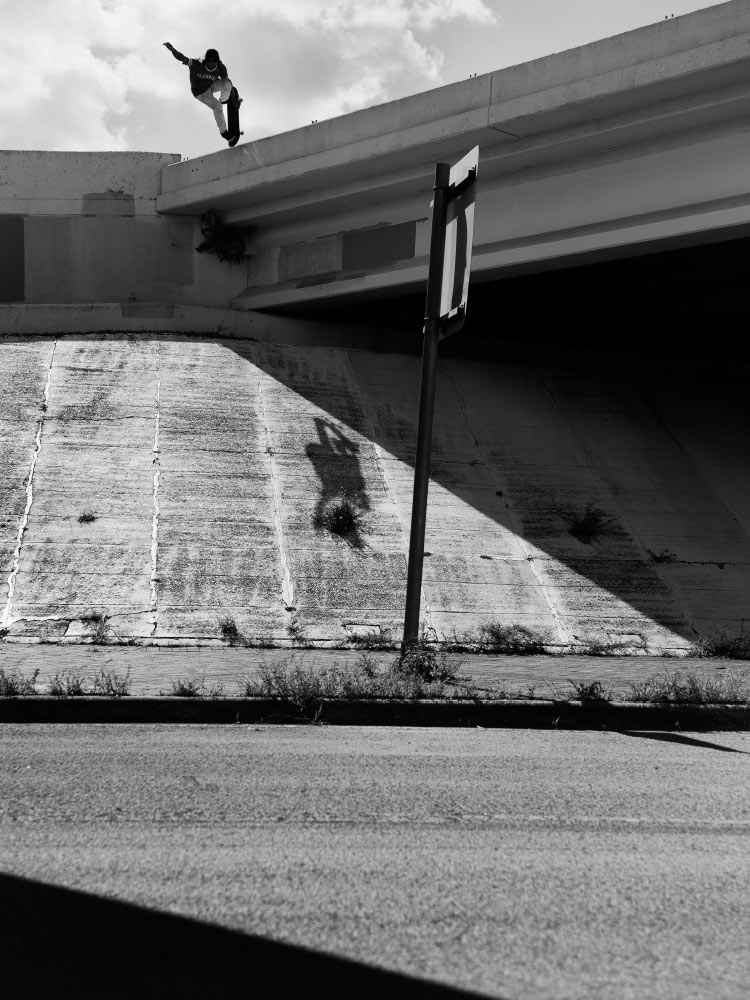 As of recently, the Deathwish team has become an all-terrain mob capable of skating damn near anything, and Lizard really puts the cherry on top. He manages to find spots that most skateboarders wouldn’t see in a million years. He’ll make us turn the van around to check something no one else even noticed, and the next thing you know he’s got a heavy trick under his belt and we’re out—dumptruck off the freeway. Good eyes, Liz 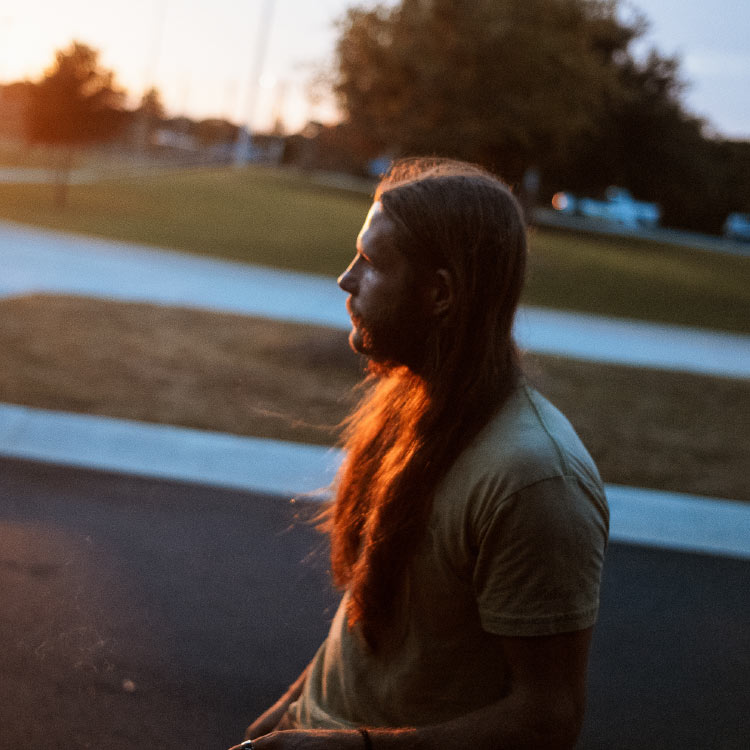 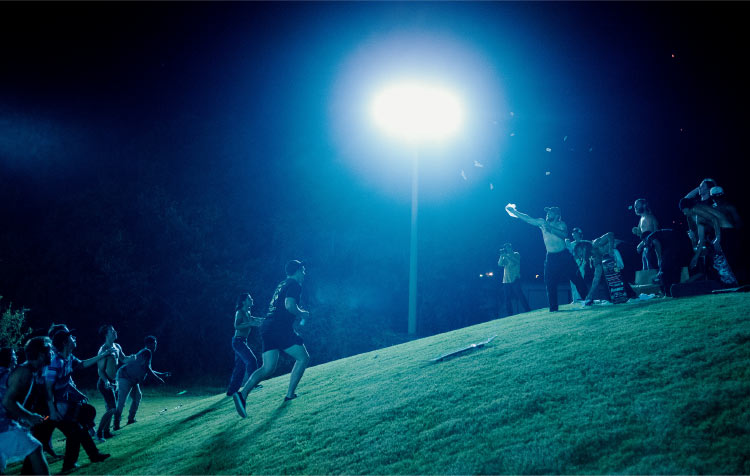 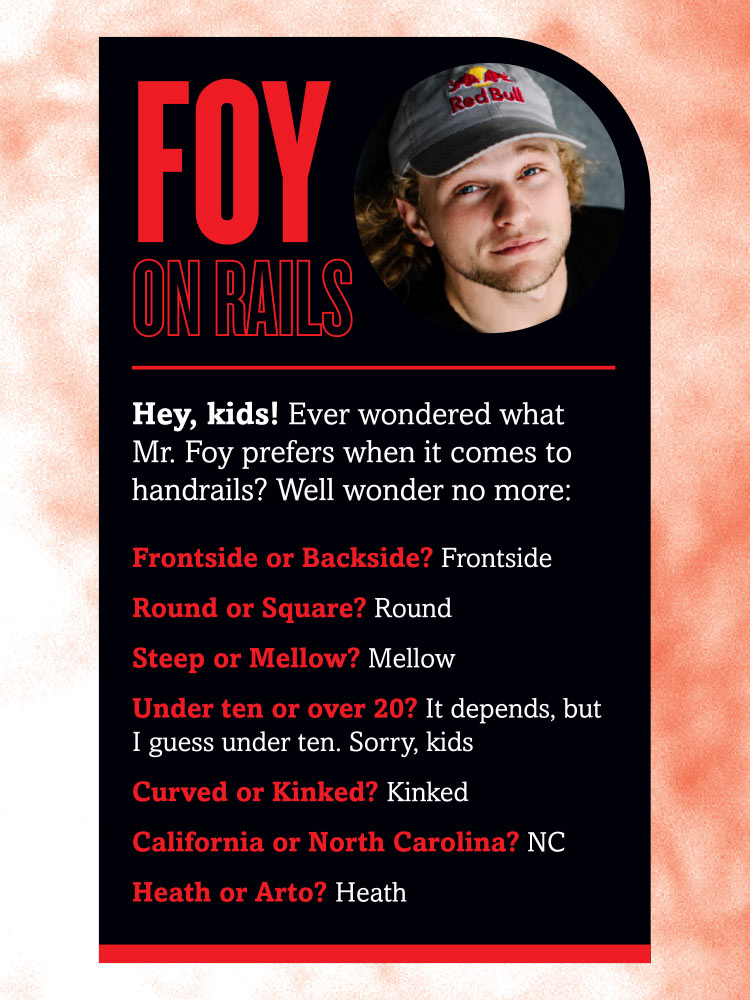 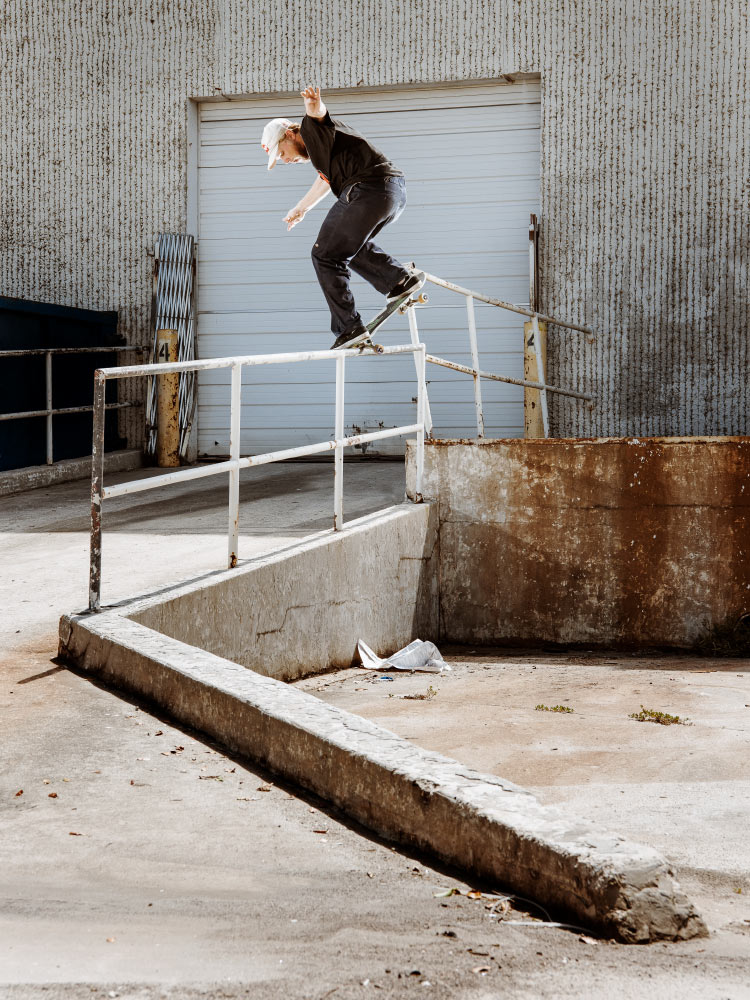 J-Foy, front crook pop over with ease in the warm FL breeze

After years and years of autograph signings, you end up seeing all sorts of shit put in front of you to sign—anything from iPhones to hamburger buns to boobs and mag covers. But now that Neen has transformed into the Gordon Ramsay of skating, fans are bringing culinary items for him to write upon. At almost every stop there was something different—from cutting boards to small dinner tables, it was all there. Cheers to eatin’ good, Neeno! 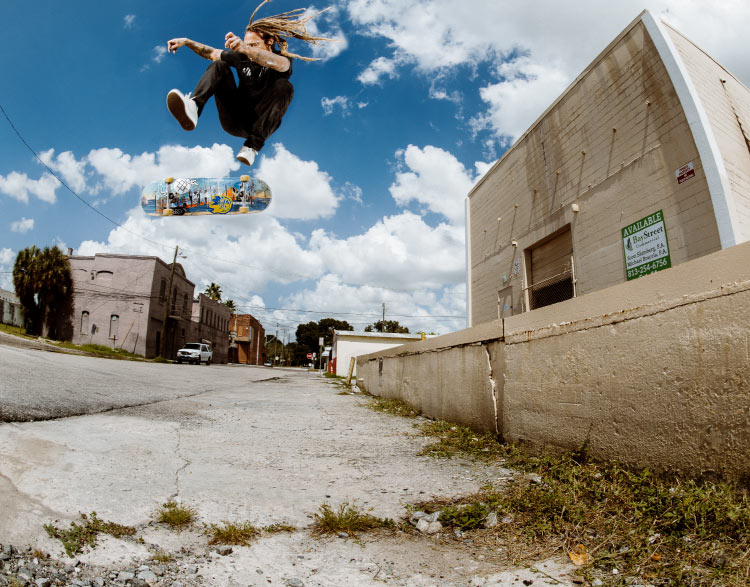 Neen smokes this heelflip in the cigar capital of the world. Healthy choice, Mr. Williams 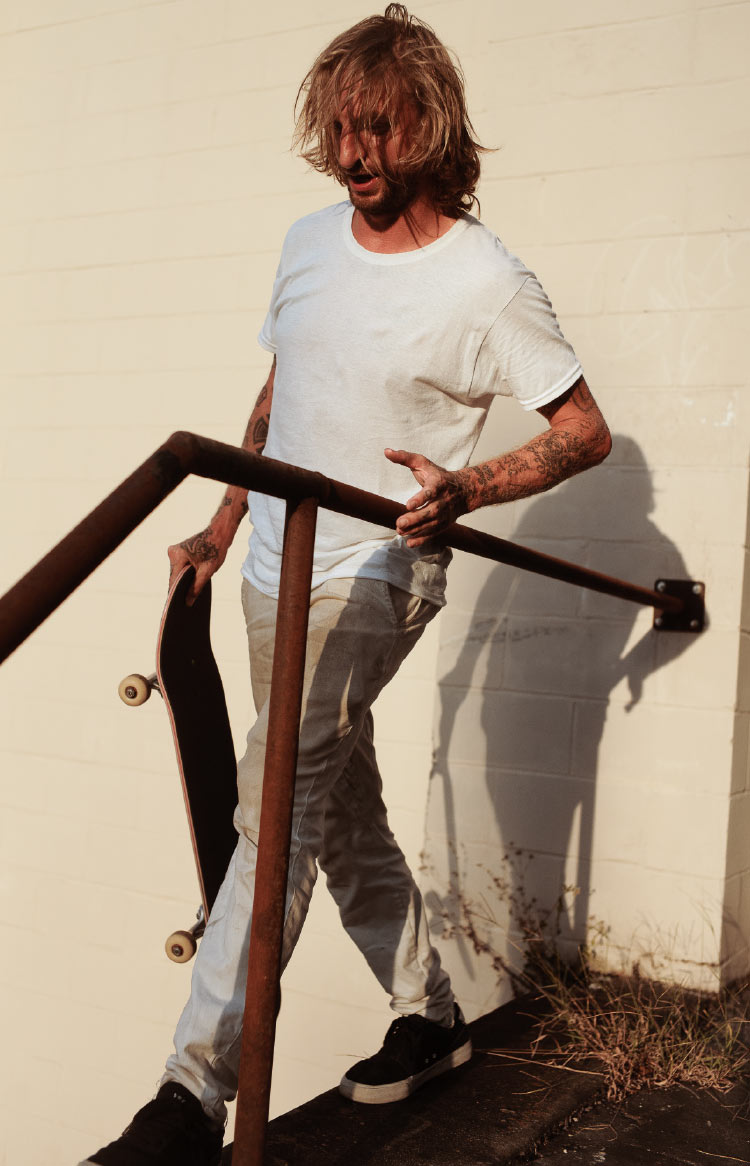 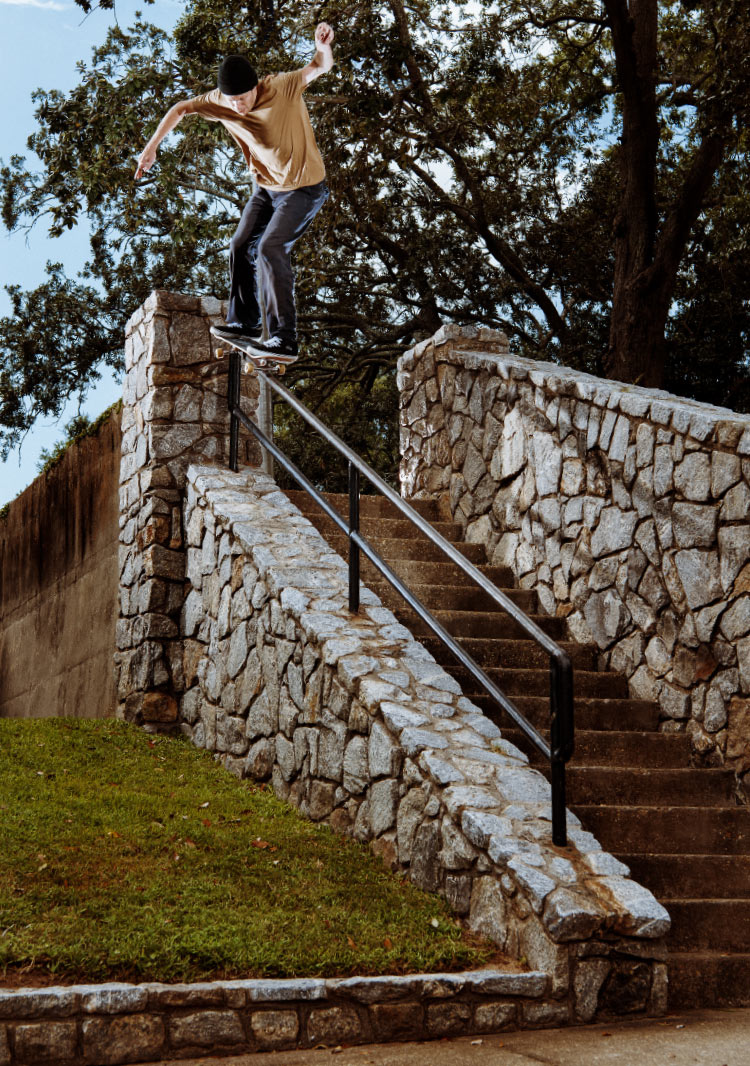 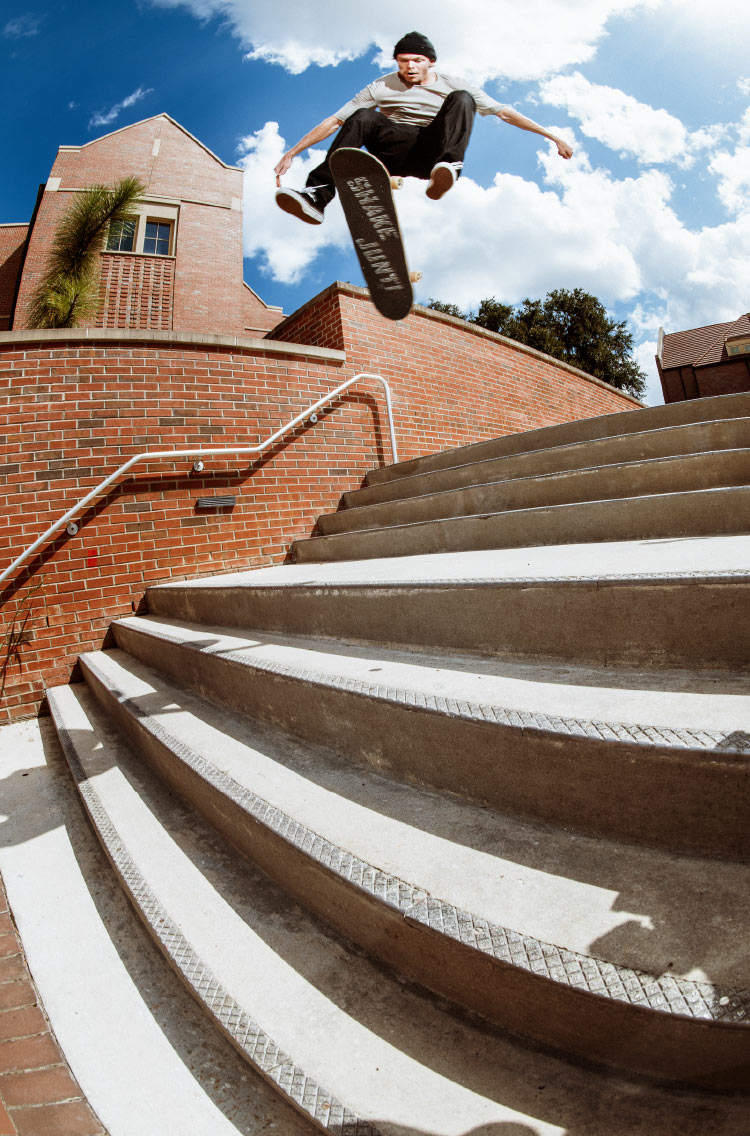 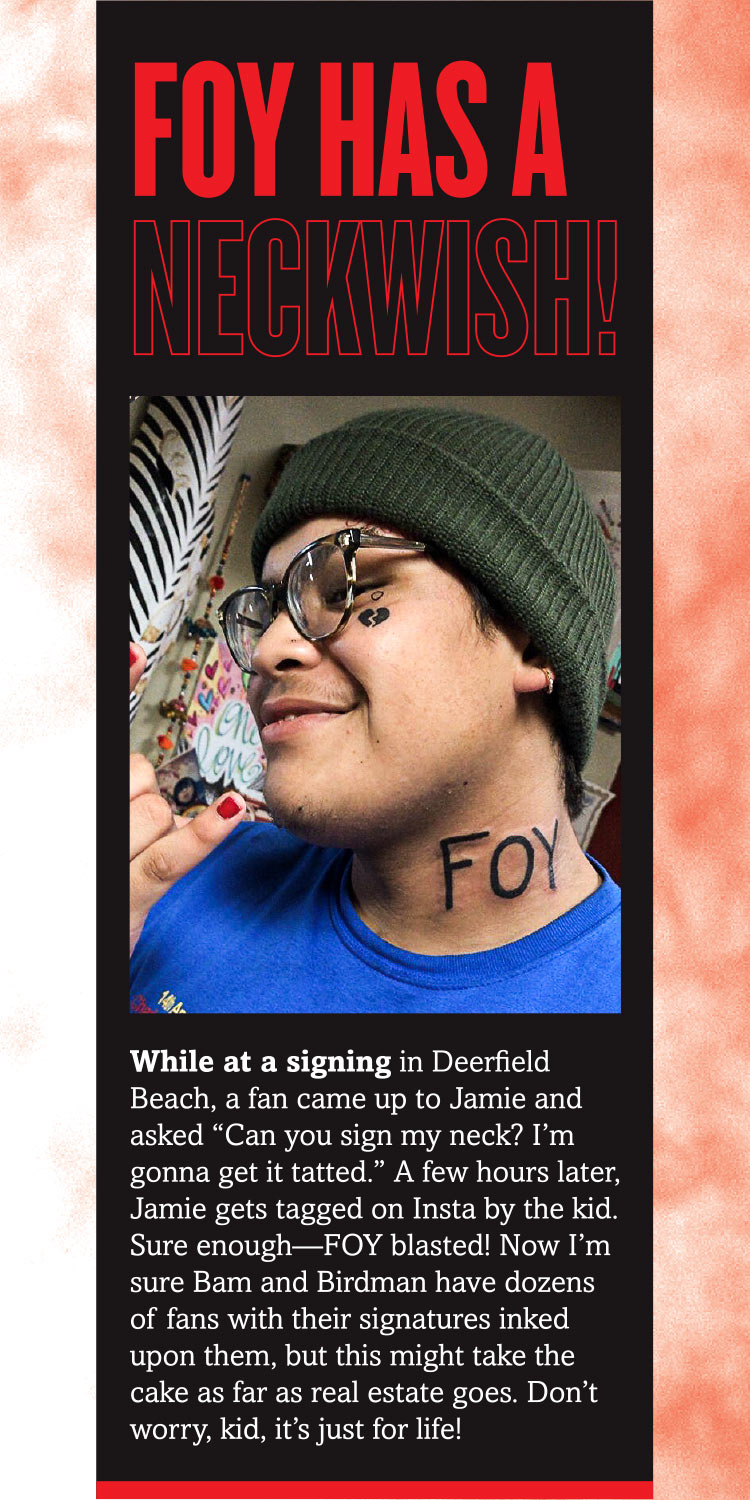 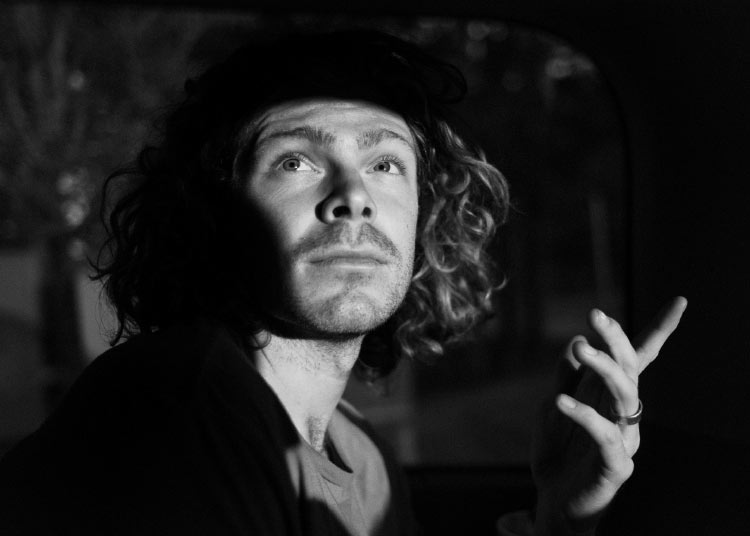 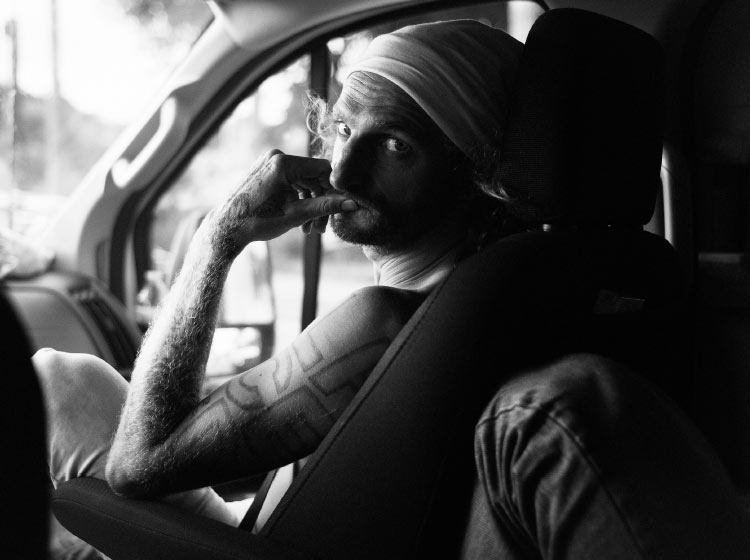 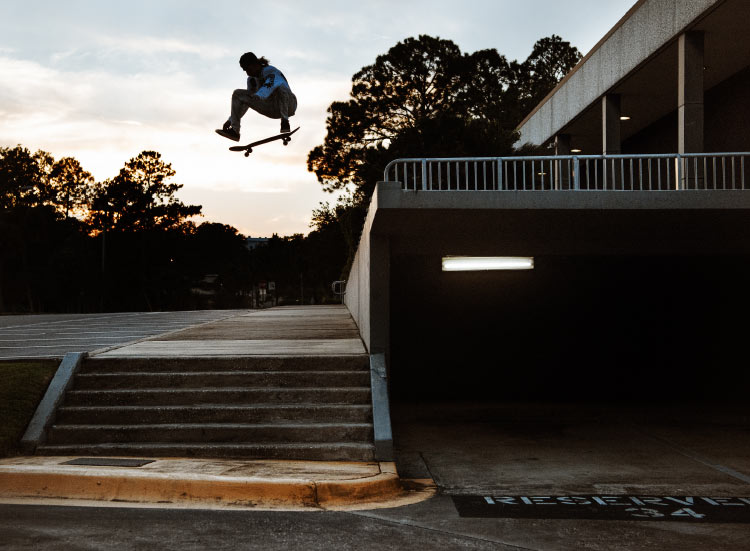 When Lizard doesn’t land a trick, he tells all of us he has officially retired. That means he comes out of retirement about once or twice a day. Welcome back again, Liz. Kickflip 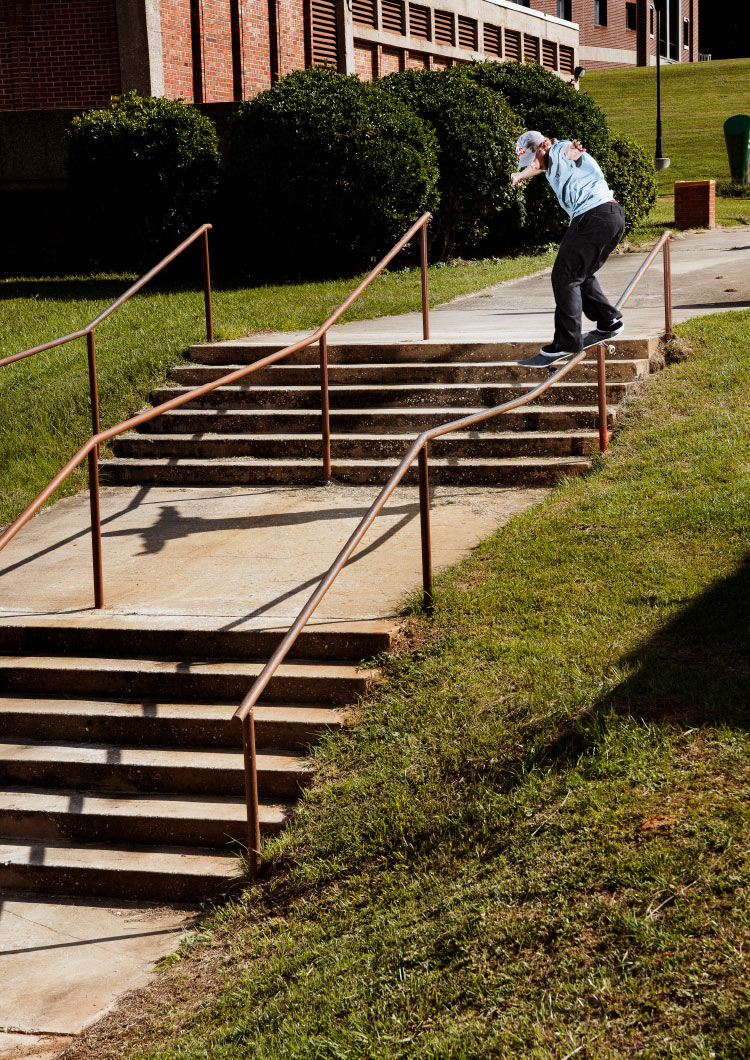 You shoulda seen the smile on Jamie’s face when we got to this school full of rails. Similar to Foy in a candy store, it was nothing but smiles and back Smiths for miles

This was Christian Henry’s first tour with the Deathwish team and I learned a lot about him. The kid likes big wheels, big spots and big naps. He was seriously snoozing on every drive. He passed out with no seatbelt on, so Jay, who was driving, hit him with a break-check. Christian landed a heavy faceplant into the seat in front of him. We all had a good laugh. Thanks, Christian! 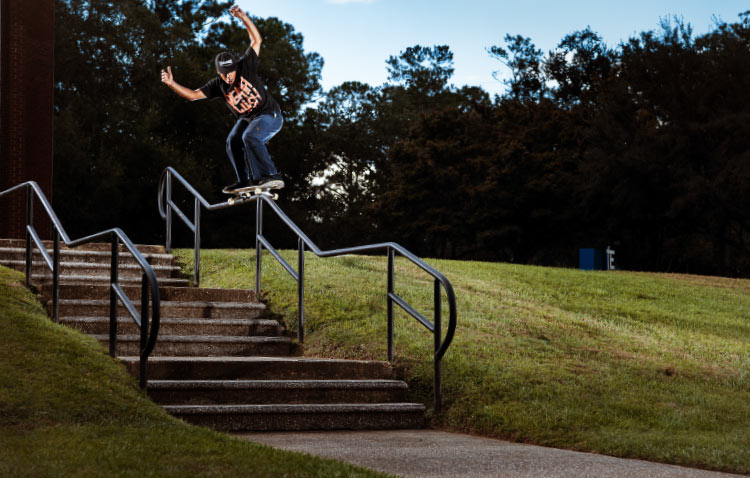 Christian handles a Florida kinker backside without a faceplant 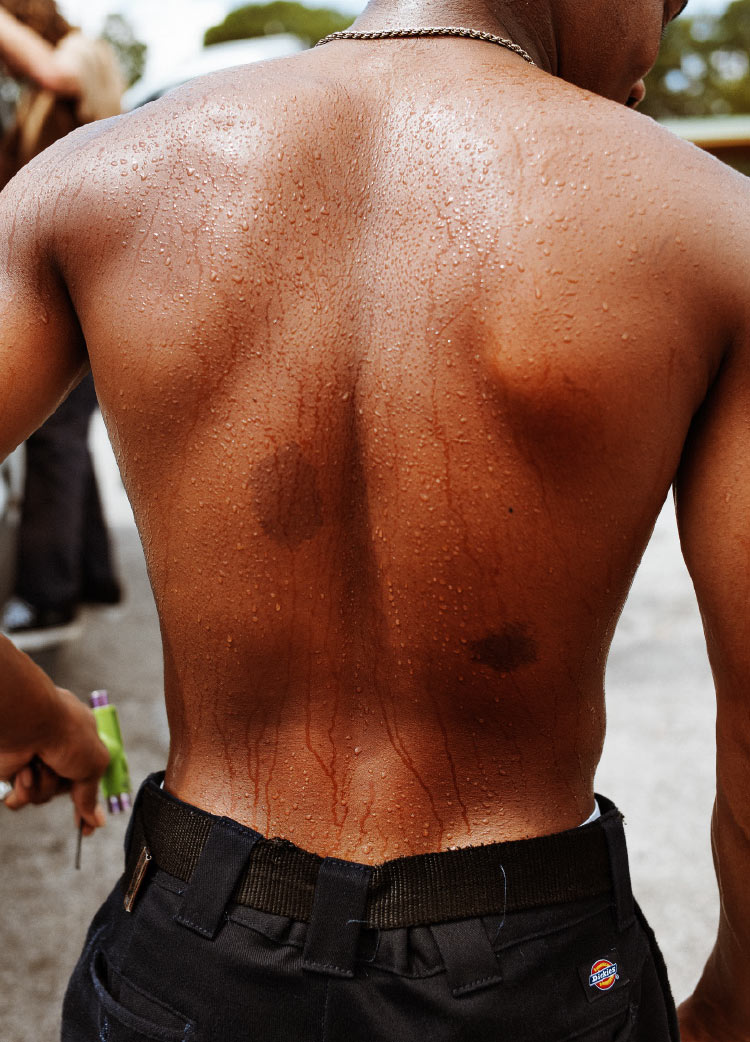 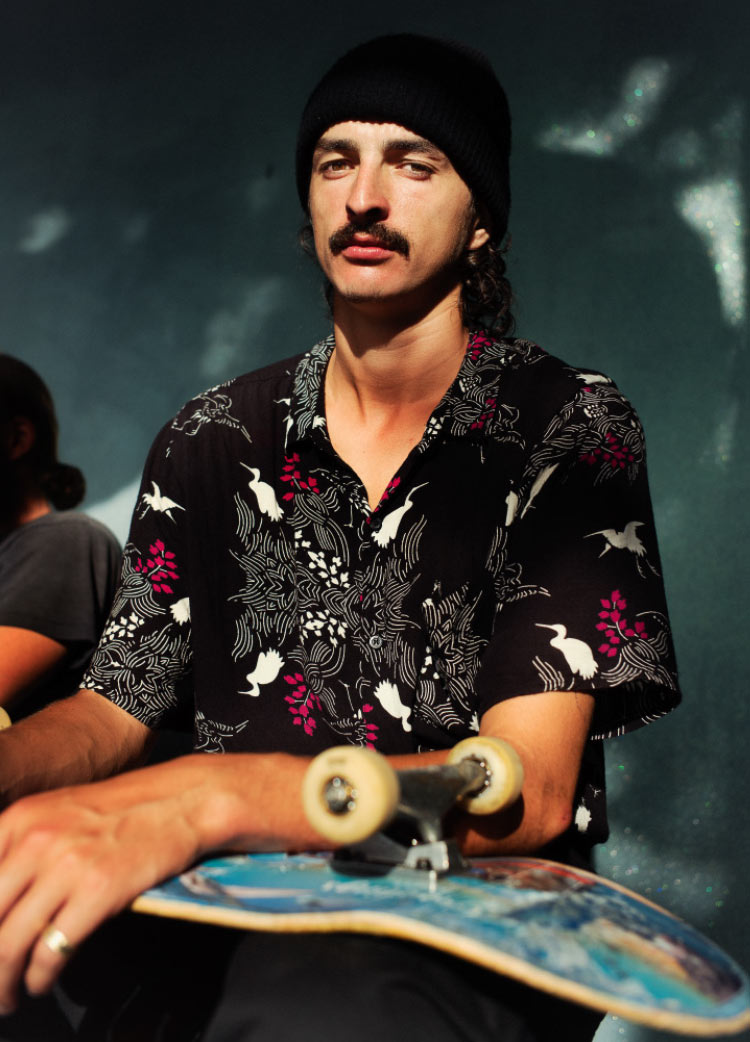 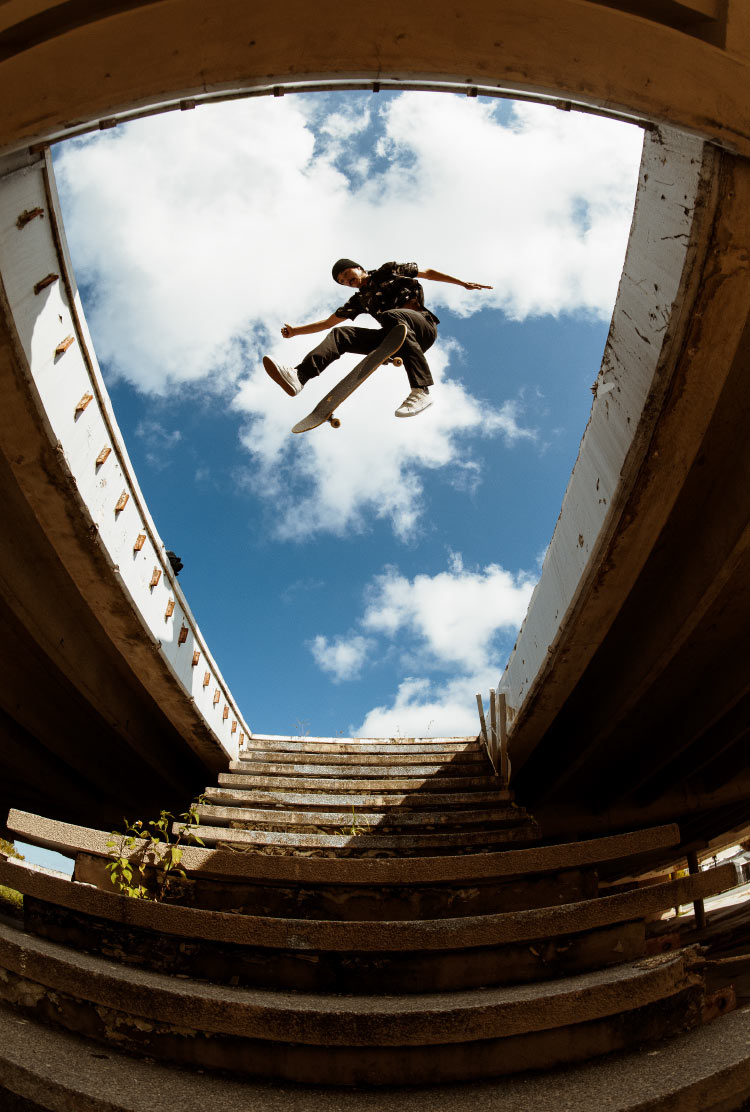 How do you say Baker in Spanish? Baker por vida, foo! Erick Valdez with a tasteful tré flip

If you ever find yourself within 100 miles of Jacksonville, FL, go to Kona skatepark. I don’t care if you’re on a family vacation, honeymoon or whatever, just get there! It’s a prehistoric tidal wave of unforgiving cement. The place has been there since the ’70s and still beats your city’s new “plaza.” Hit the snake run full speed, go fast, get low and buckle up. 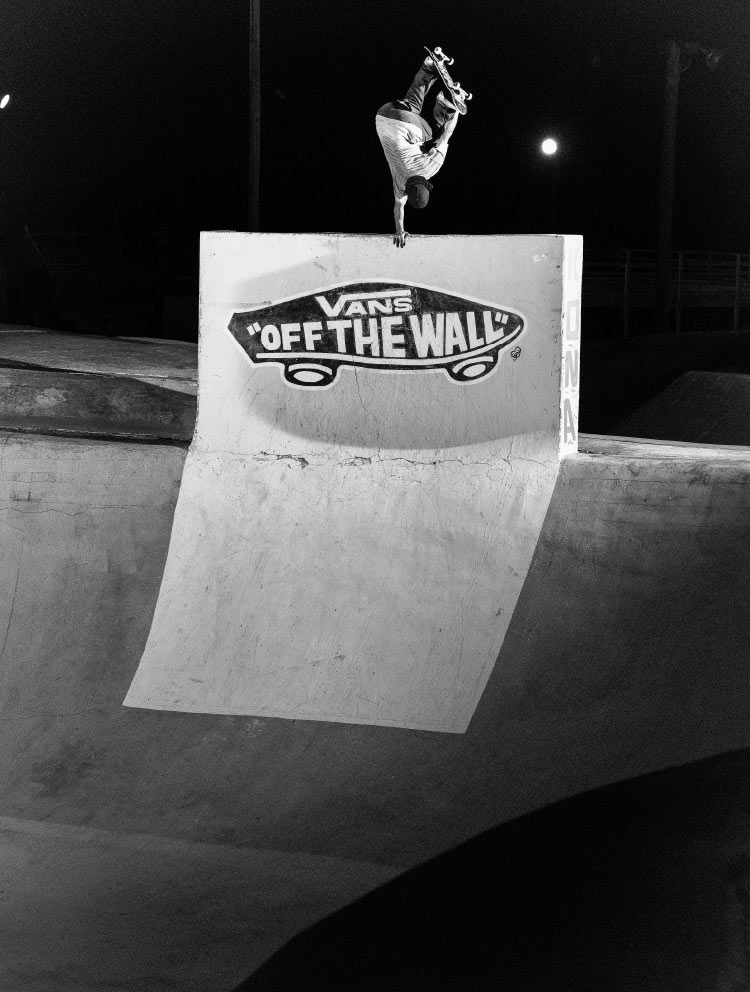 Pedro with one hell of an eggplant. Hey, Vans, does this count as photo incentive? 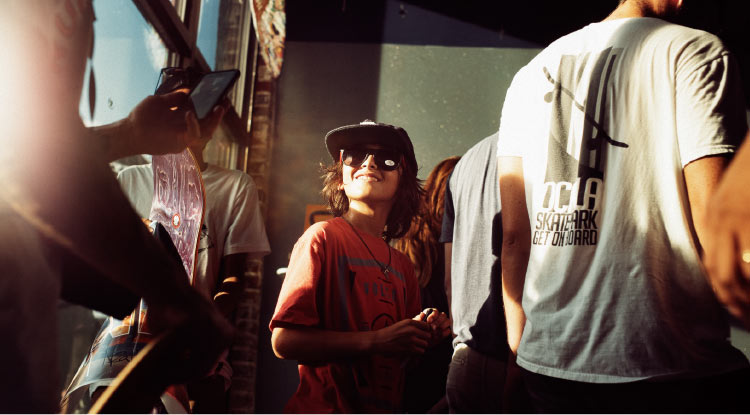 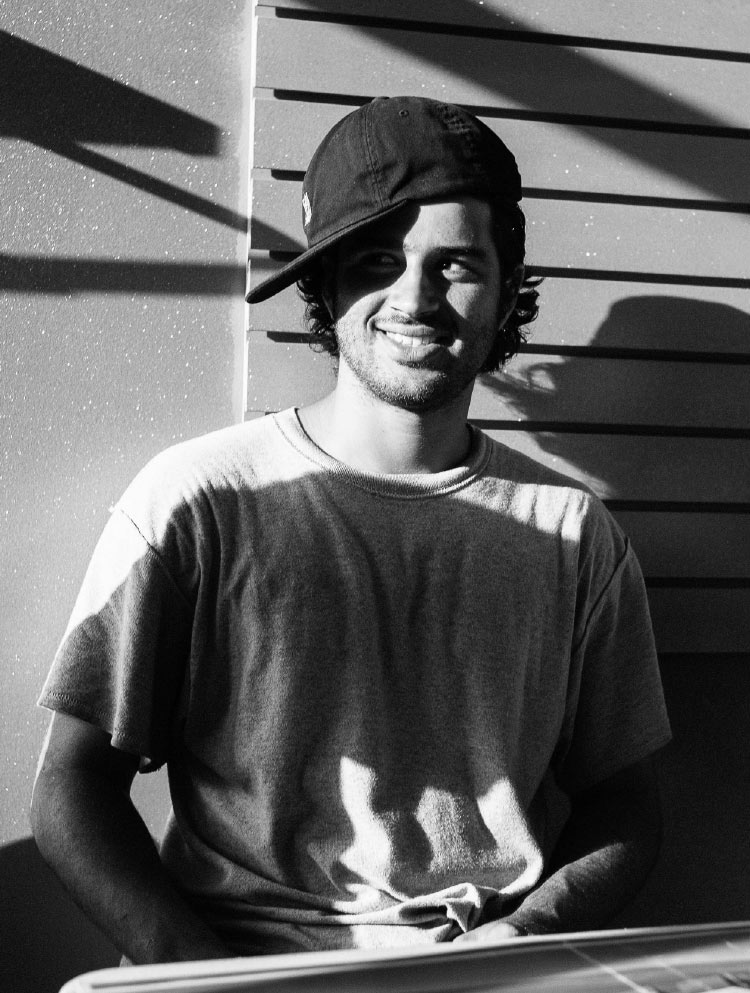 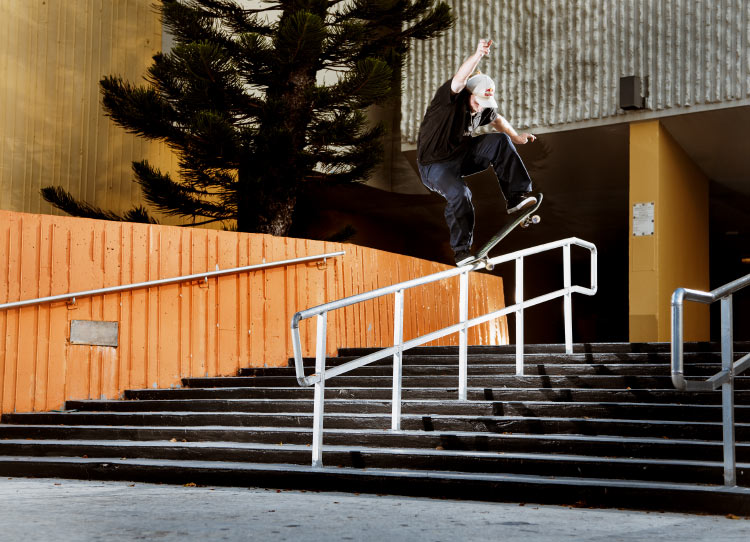 Jamie once told me, “I love skate spots.” Big surprise, right? Here he is deep in love with a fakie ollie fakie 5-0. Cute couple, huh?

Dickson is the modern-day Marlboro Man. He carries himself like a true gentleman and skates like one, too. No 540 biggerflips or whatever new gimmicky tricks you kids are into—just pure power and speed. Hopefully he’ll inspire the future generation to put the contest makes and all-over print hoodies on the shelf and start caring about properly flicking and catching your tricks, goddamn it. 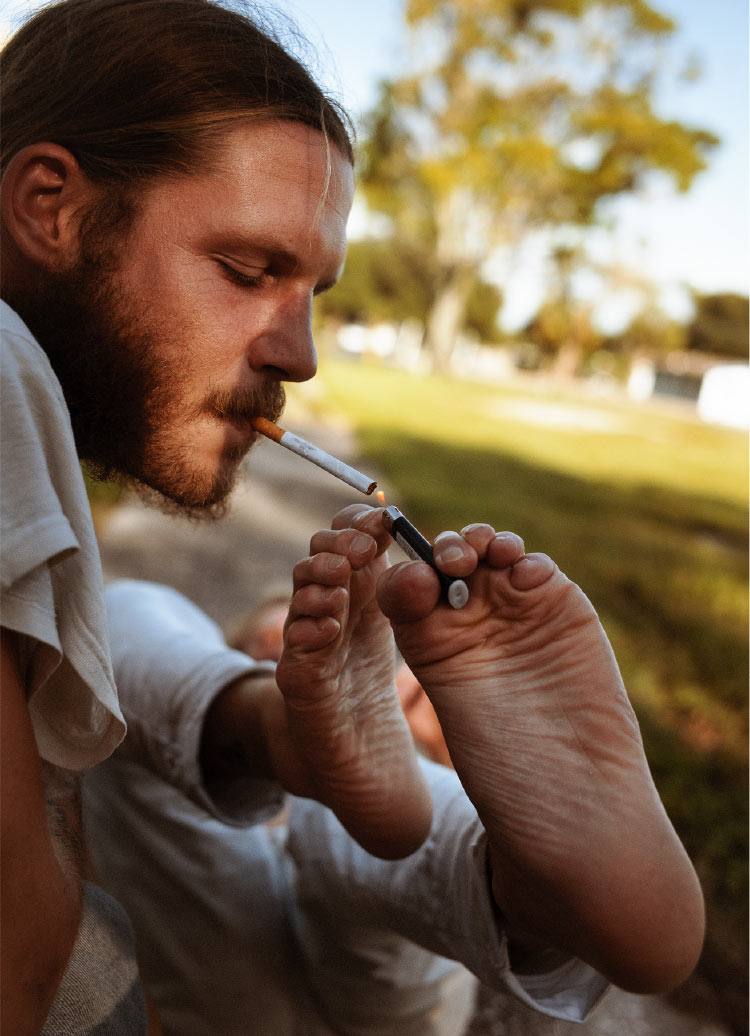 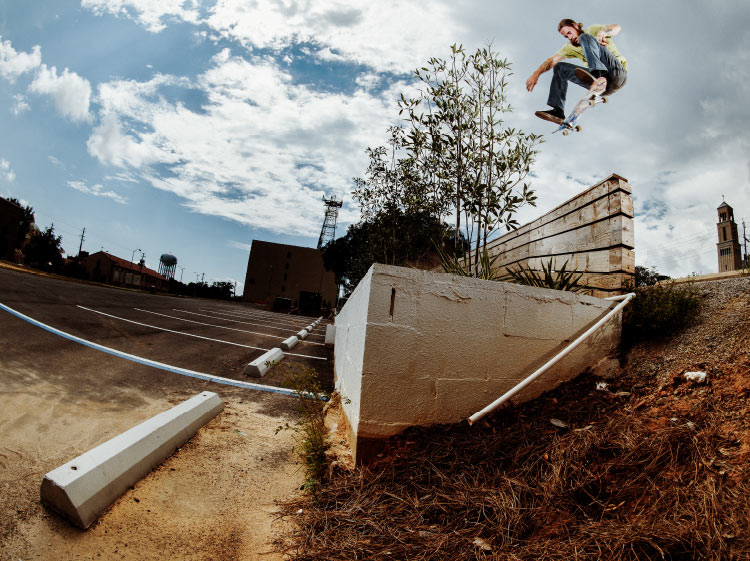 Major frontside flip off a minor bump for the Marlboro Man

Shooting an article on a ten-day trip can be tough with demos and signings almost every day and a four-hour drive every night. But the Sunshine State came correct with ripping spots, no rain and top-notch times. Road beers were had for P-Stone and no injuries crossed our path. Sounds to me like we fucked up Florida worse than the hurricanes do. Don’t worry; we’ll be back.