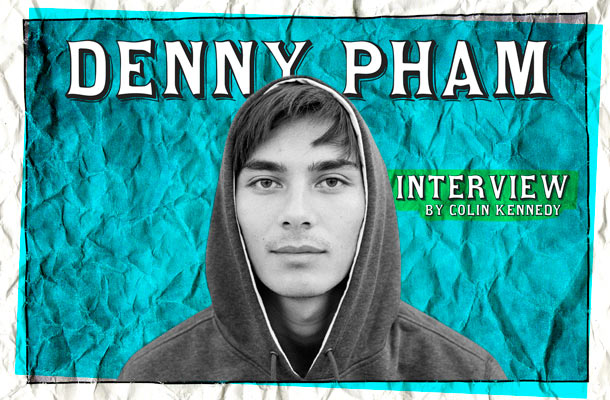 What is your full name, age, hometown and years skating?
My name is Denny Pham, I'm 25 years old, I live in Berlin and I've been skating around 14 years now.

Have you always lived in Berlin?
No, I grew up in Rostock. It's in the north of Germany next to the sea. Summers are nice up there but for skating it's not really good.

You’re a pretty on-point/professional guy. How do you not become distracted by all the freely-available, alternative 24-hour entertainment in Berlin?
Well, I kinda found my own way to enjoy Berlin, I guess. Of course I go out with my friends and stuff, but I try not to get lost every weekend at Berghain club! Besides that I wanna spend time with my girl when I'm home, 'cause half of the time I'm somewhere else in the world. I'm more than happy to live there, though. It never gets boring and the skate scene is great.


If you could live in any other city in Europe besides Berlin, where would you live?
That's a hard one. I love Berlin, but I have been in Strasbourg recently, which is very beautiful. Unfortunately, my French sucks, so that's not really an option right now. I guess Cologne 'cause a lot of my friends live there. Or Barca—living the beach life for a while!

How long have you been filming for this part?
About two-and-a-half years.

What else are you working on right now?
Surprisingly, there are no other projects at the moment! There's almost always something going on, so I'm sure some projects are coming up soon!


You've travelled extensively throughout various continents. Have you had any sketchy moments?
Oh yeah, definitely! About two years ago I went to this Thai island, Koh Samui, to chill for a week. Out of nowhere I got really sick and I had absolutely no clue what was going on. I saw a doctor and he told me I had Dengue fever. It was New Year's Eve, almost midnight, and I had to get checked into the hospital while fireworks were erupting everywhere. I had to stay there for nine days and almost missed a trip to China with Patrik Wallner to film my Red Bull welcome clip. When I was flying home I had a layover in Bangkok and found an envelope in the airport with $2,500 US dollars in it with no note or anything. So yeah, there have been some sketchy moments.

Did you keep the money?
Well, I gave Burny and Patrik 300 each and kept the rest. Honestly if I would have gave it to the police,  they would have put it in their own pocket.


Out of those dudes, who is the biggest risk taker?
That's another hard one. I think every single one of those guys is an individual and takes different kinds of risks. Michael isn't bad, though. He's always sick or hurt.

When does the next installment of Visualtraveling drop?
I'm not sure to be honest, but hopefully the beginning of next year.

How did you end up riding for Flip?
Well, my TM Colin Kennedy and photographer Thomas Gentsch have a pretty good relationship with Ian Deacon who owns Flip, so they introduced me to him. The team came to Berlin in the summer of 2013 and I got to skate with everybody. Later I went to LA to work on a Red Bull project with Arto Saari. I met him at cafe in West Hollywood to plan our project, and after we left he was, like, "Welcome to the team, bro! Time for your first portrait shoot!" That was an epic moment right there!

What age were you when Flip’s Sorry was released?
I was 11. Pretty sick when I think about it.

Out of the long list of Flip riders, past and present, who is your favorite?
Every single one of them is my favorite skateboarder. They are all so sick. But my all-time favorite is probably Bastien. His style is so unique!

Is there more to Germany for skate tourists than just Berlin?
Cologne is pretty dope. Such a good skate scene and cool city. It's not as big as Berlin, so you can reach everything by bicycle. And Stuttgart. That city is full of spots and downhills.

The stereotypical term Euros is often attributed to any skateboarder that doesn’t hail from the USA. Can you define that stereotype and shatter the myth for all the uneducated?
It's hard to define 'cause there are a lot of different types of us Euros. Just look at a map—from Finland to Spain you find about six different cultures and mentalities. So a Euro from Spain might be a completely different type of skateboarder than one from Finland. Then we have our friends from the UK that love to skate crusty spots with some extra-hipster steez, you know?! Just kidding. What I'm trying to say is that different countries equal different preferences.

Who is the most-legendary German skateboarder?
Sami Harithi for sure! He killed it so hard in the early '90s and even before. When the Berlin Wall was still there he was the exceptional talent from the west part of Berlin. I'm hyped we're skating together these days. He's in really good shape and kills it at every session. Who can make that claim at thirty-seven? Definitely legend status.

Aside from your passport, money and all the typical travel essentials, what do you always bring with you on trips?
Nixon blaster, a golf ball to massage my feet, a book and snacks.

What's the next big project for you?
I'm working on my photo skills. I wanna shoot more. It's so much fun. It just sucks when Michael Mackrodt doesn't want to give you your camera back. Love you, Michi.

Any shout outs?
Thanks to all my friends, family, my love Sara, and my sponsors: Flip, Nike SB, Red Bull, Skatedeluxe, Nixon, Spitfire and Thunder. And thanks Thrasher for the opportunity!