Filming for "Love and Gratitude" 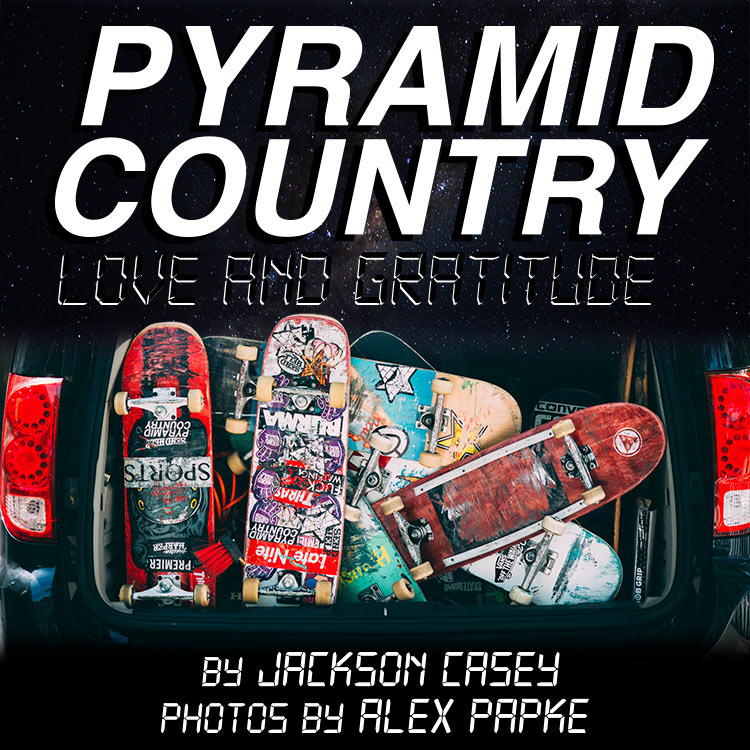 Generally speaking, skate trips are not glamorous. At all. From having 19 people sleeping on our homie Braydon’s carpet in Michigan and it being so crowded that some opted to sleep in the cemetery across the street, blanketed by stolen American flags, to us all crashing the Mull Brothers’ spot in Los Angeles and ruining their toilet; It’s been our way of doing things together. Our two weeks a year with Pyramid Country where us regular Joes get to feel a simulated, maybe beta testing, version of the paid skateboarder’s lifestyle. Wouldn’t change that for the world!

This trip was much different. Only eight of us, three new faces, an AirBnB where only three people sleep on the floor (thanks Tony!), and a little extra scratch for gas and food at the house. This new, smaller squad came from half of our team getting surgeries, having babies, etc. Life happened. I also apparently called Jack Olson once every six months while drinking, asking him to get on the team—and apparently he said “yes” every time, until Phoenix Am weekend when he goes, “Dude, you guys are about to go on a trip? Let me cruise!” That was that, and we now happily had one too many in the van.

We hit the road from Phoenix to go pick up Papke, Townley and Jack Olson from Southern California. We picked the worst fucking time possible to start a trip, completely oblivious to it being either the start or the end of a huge music festival right between Phoenix and LA: Coachella. It took us five hours to travel one-and-a-half miles and turned an 11 hour trip into 17. Thankfully we didn’t have all eight in the van yet! We pulled up to Sacramento, a beautiful city that felt more Midwest than it did California. All of us were so hyped on that. Here’s some of what we got. 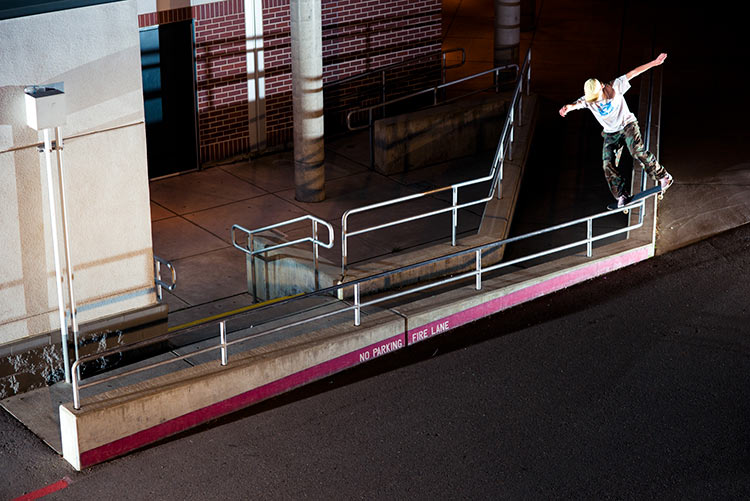 Aaron Goure, bump to boardslide through the elbow. No idea how Papke got onto the roof here, very Spiderman of him 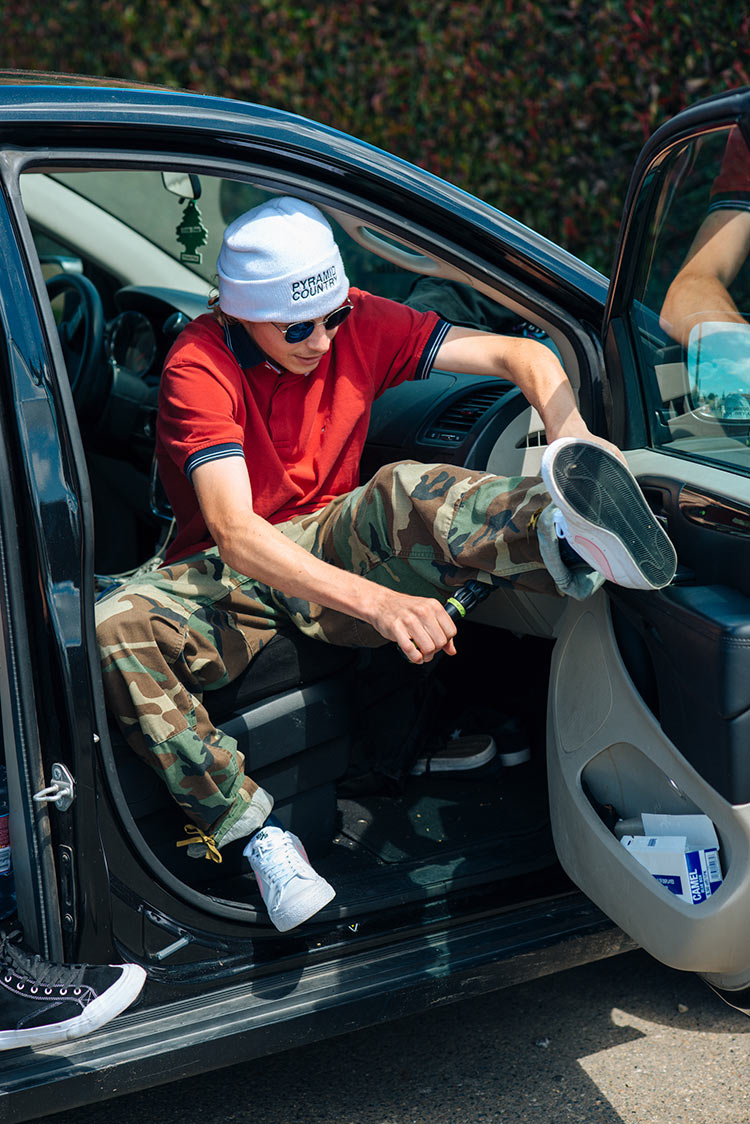 Lots of sore legs on this trip. Lots of foam rolling and Tiger Balm. Aaron utilizes the roller here 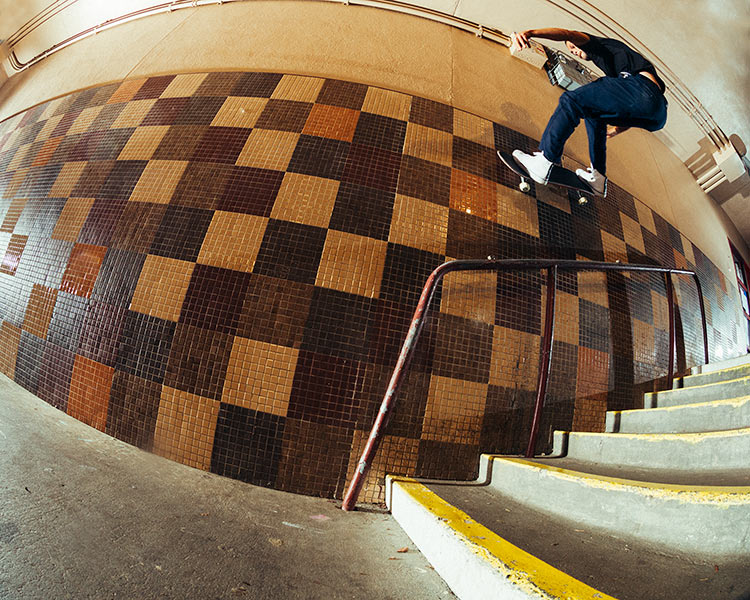 We showed up to this school to a bunch of tweakers doing their thing on these steps. We had to bargain with them to bounce, to which they just walked into the cafeteria of the school. Townley handled this wallride in the following minutes 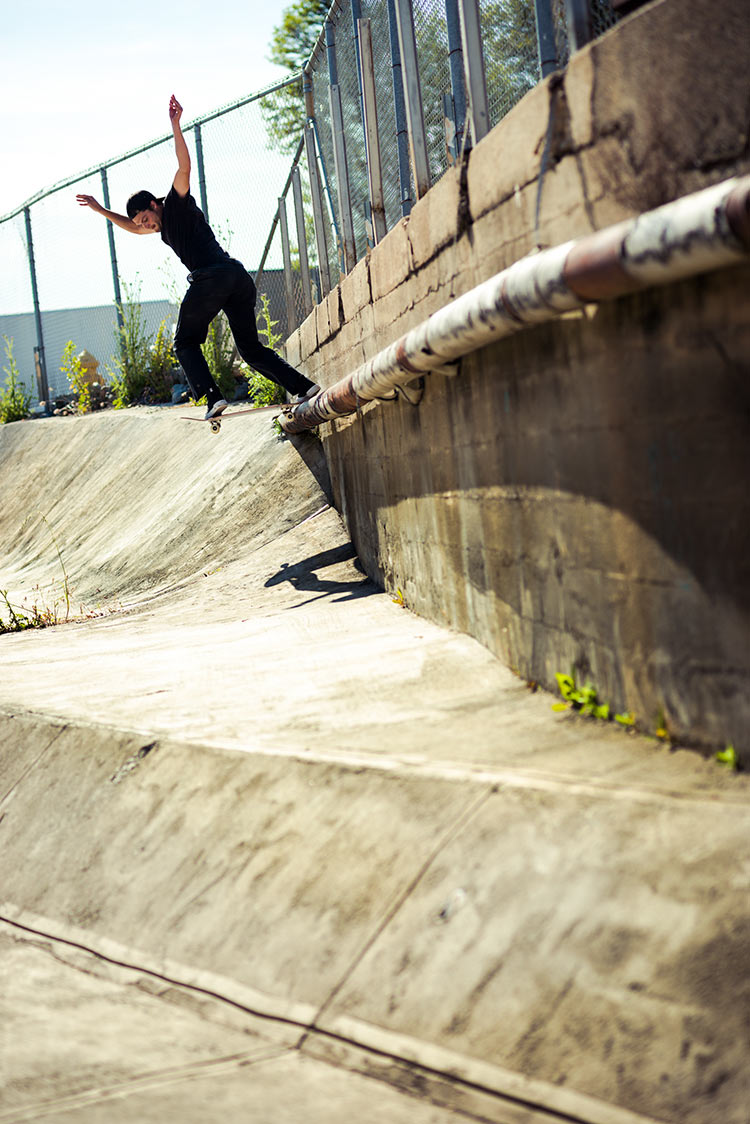 Some old man in the parking lot here was waving his dick around, which was weird ‘cause I think we were at an Air Force base. Townhouse, back tail 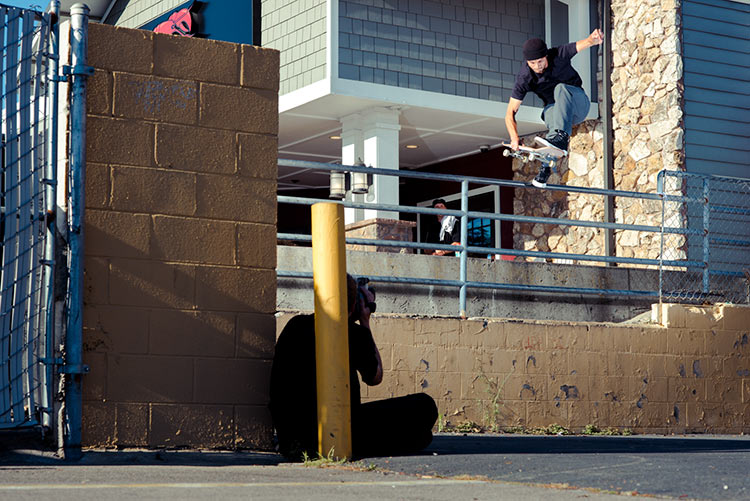 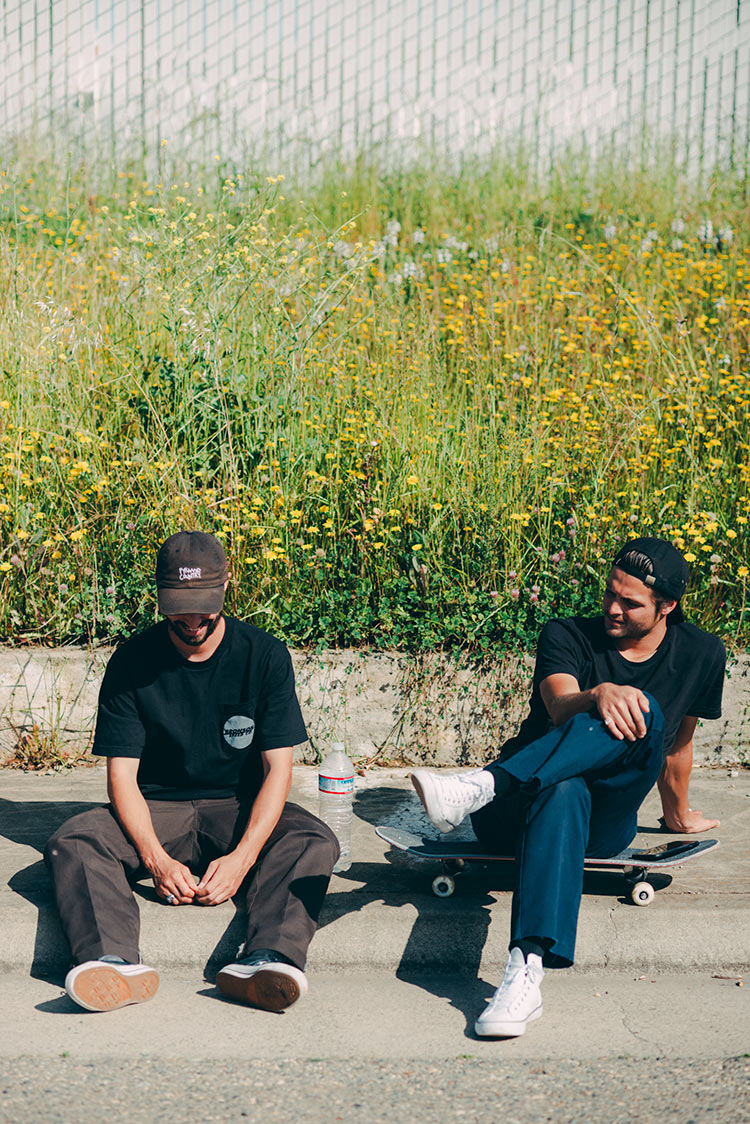 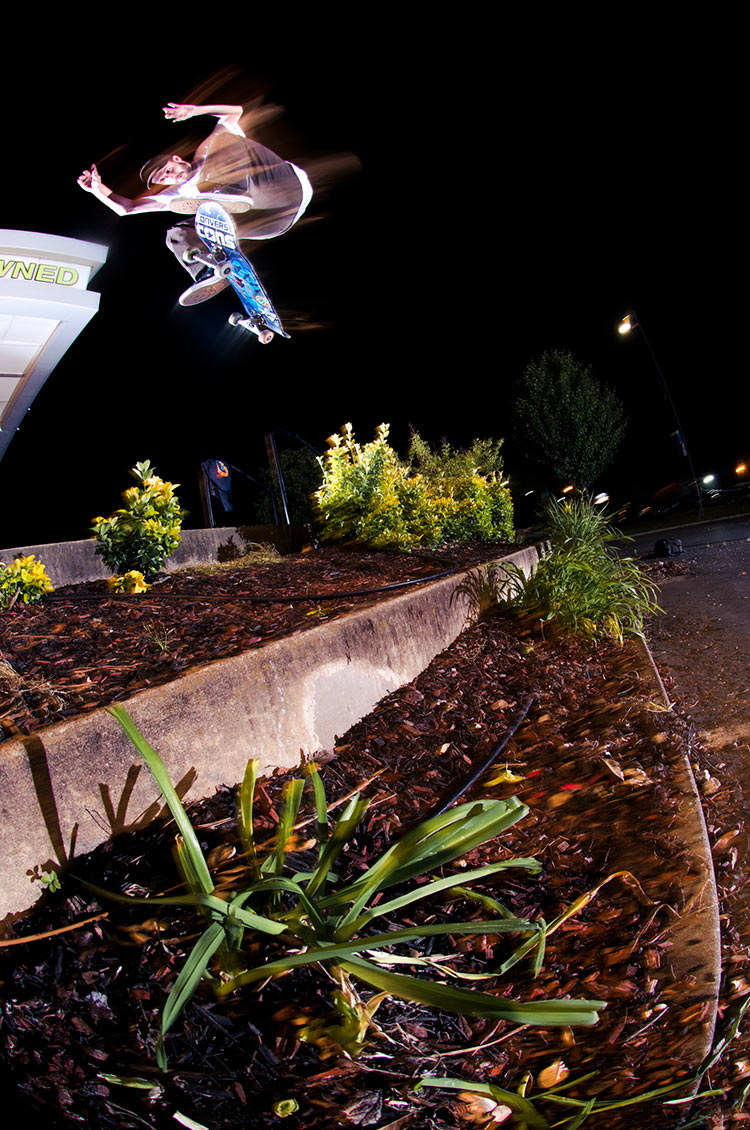 We set up the lights, started fucking around with the spot and all of the sudden Papke goes, “Holy shit, this chick from Tinder is at that Auto Zone right there!” as he points across the street. Apparently, this girl drove down to try and see us later that night but her car broke down across the street from us. Papke went and got dome across the street in this girl's broke down car. Incredible. Oh, and Braun did a proper switch hardflip. Can’t forget that part 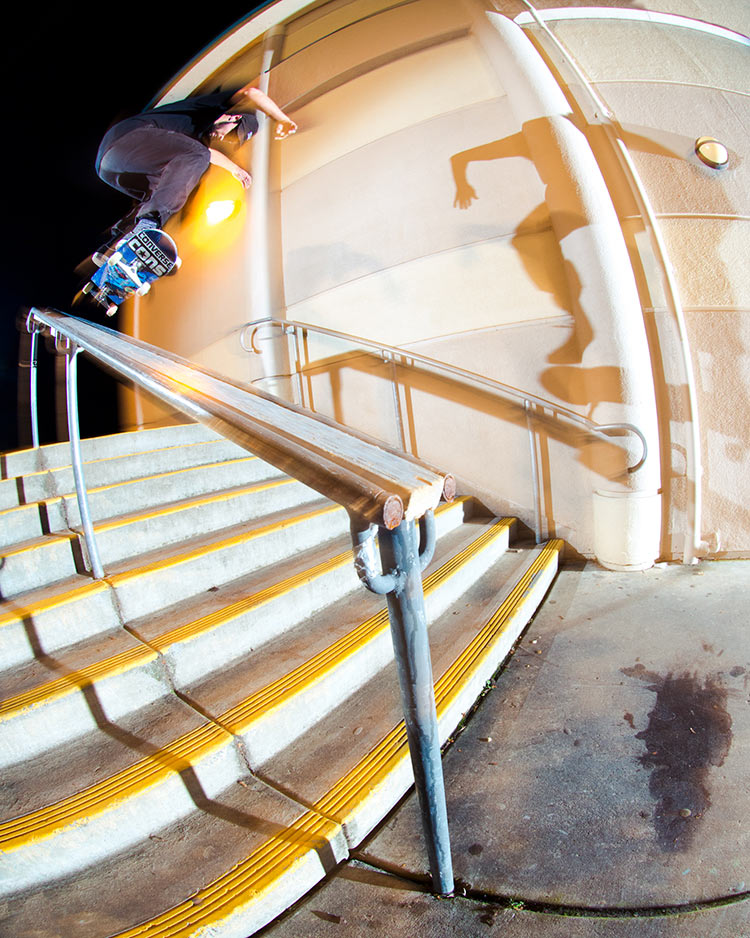 Braun can nollie flip into anything, but this one was crazy to witness. Nollie flip backside 50-50 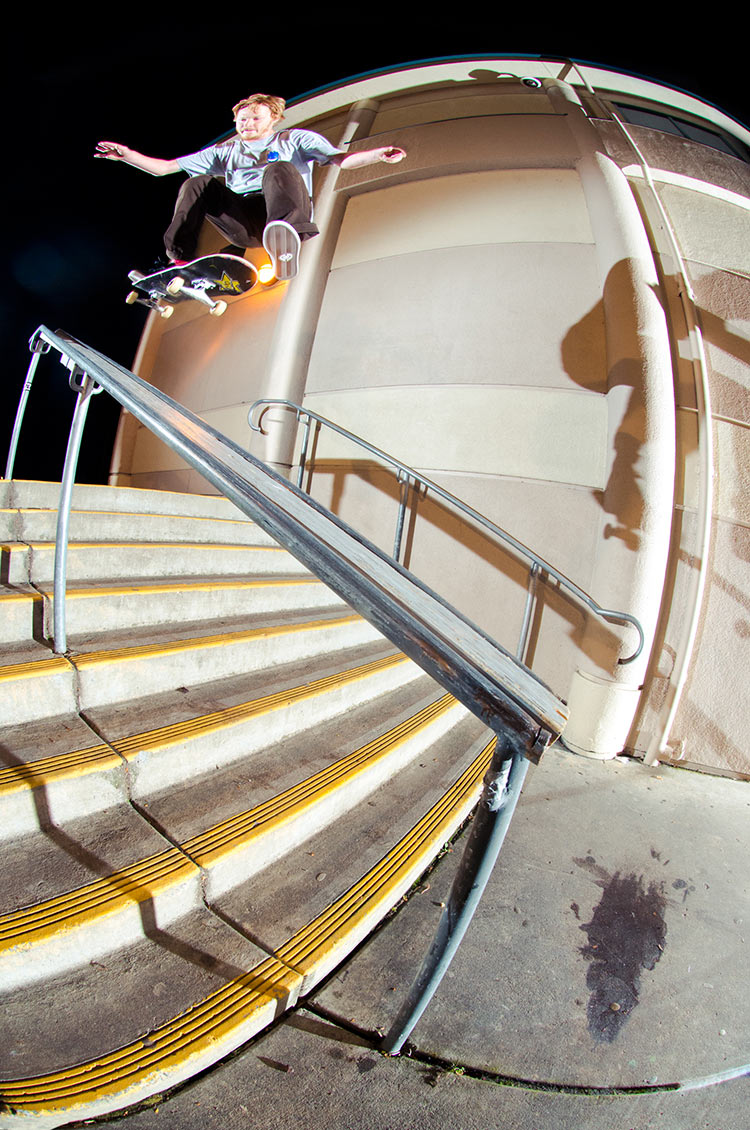 Jack had Kevin's back at this spot. Kickflip frontside 5-0 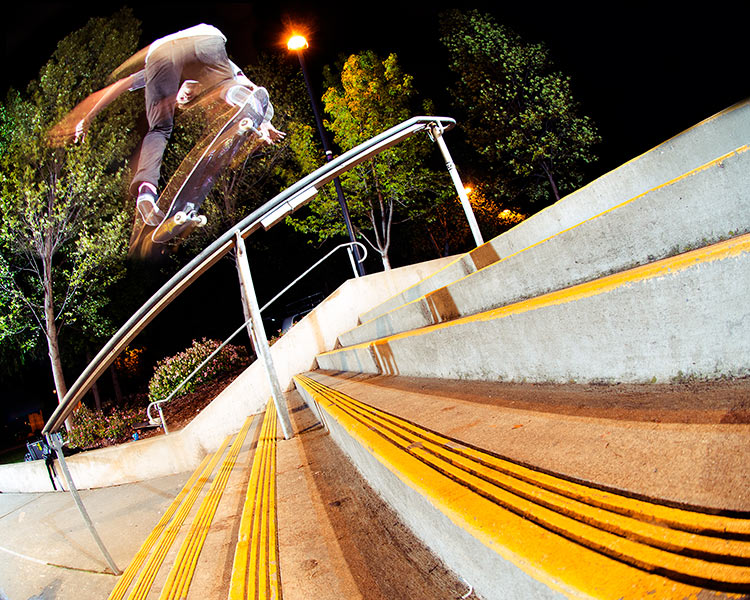 The kickflip front crook came a little while later. Good night at this rail 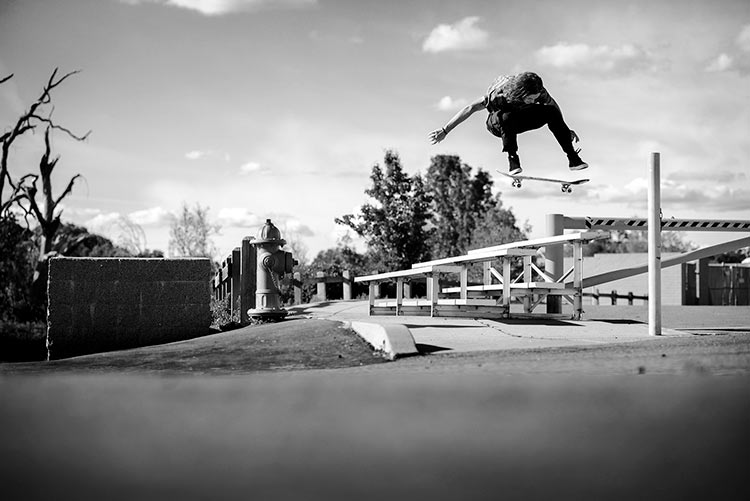 Klay Andersen handled this heelflip pretty quickly, though the rest of us were moving very slow with anxiety-riddled brains. Half of us had stayed up till about 8am with Dustin and Richard from Pizza. Klay stayed in and he got a trick. Way she goes… 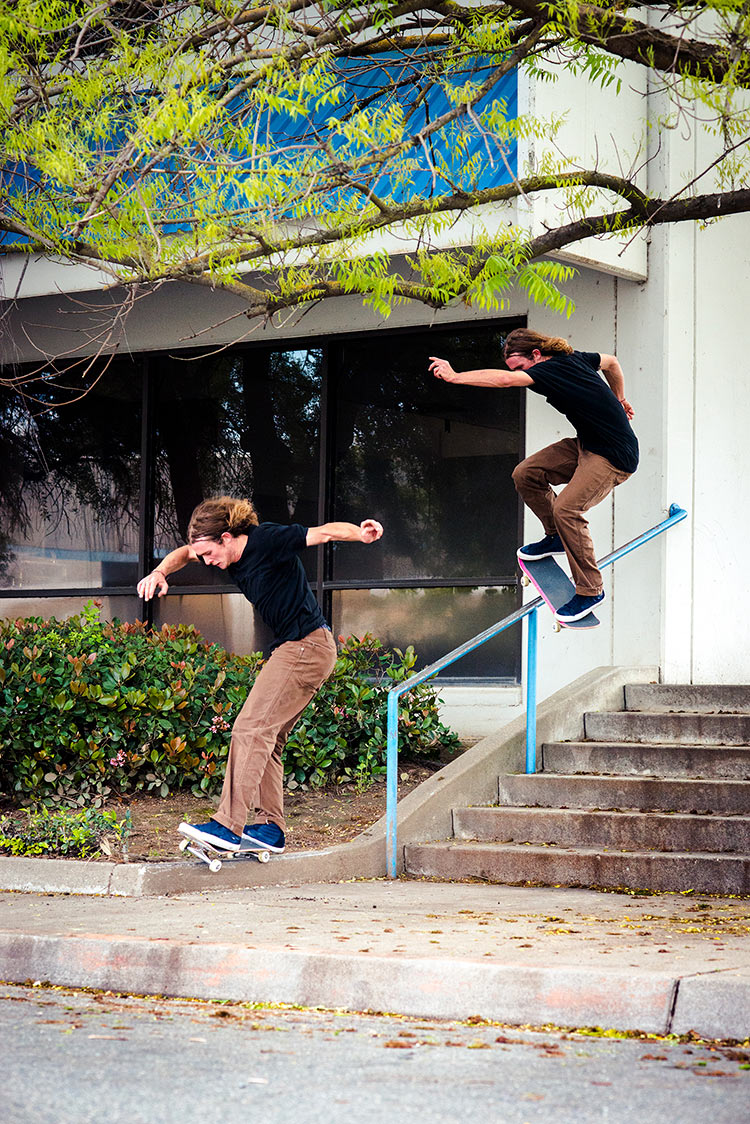 This one was wild. The curb was dry as a bone when we showed up. A rub brick and a lot of wax later, Klay got this move. Another tweaker was at this spot, throwing shoes at us and trying to snake charm Aaron 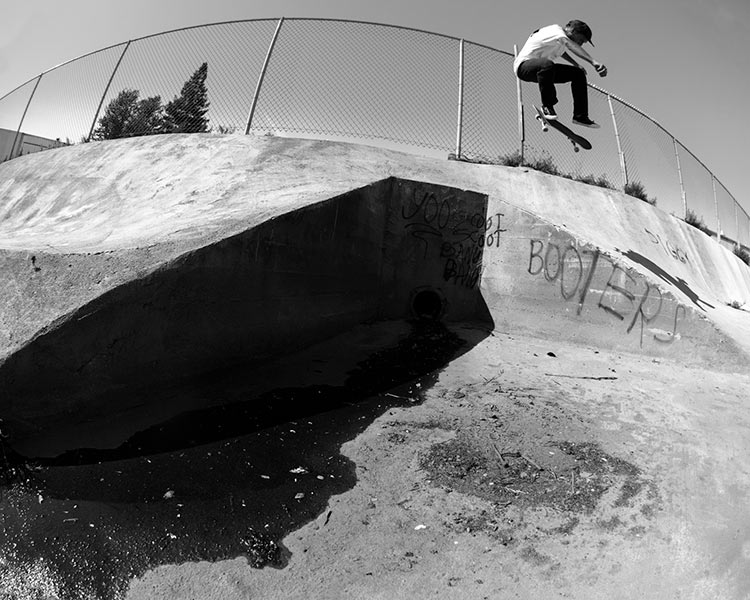 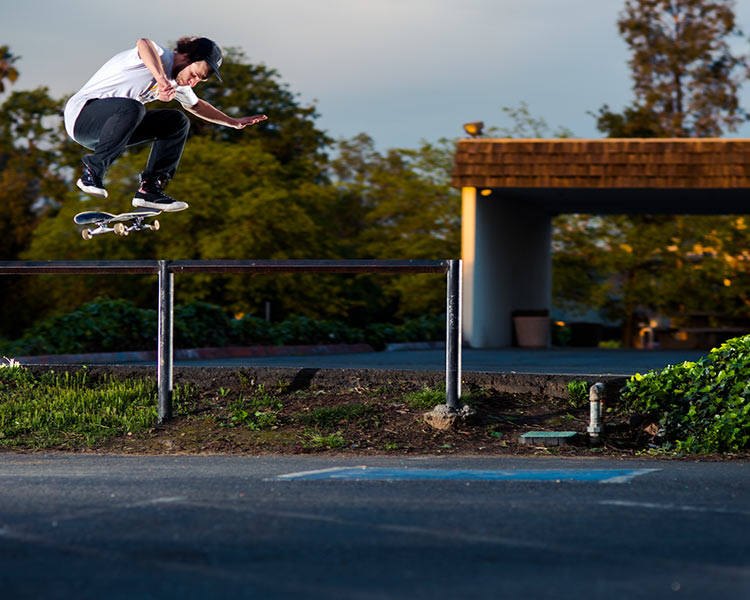 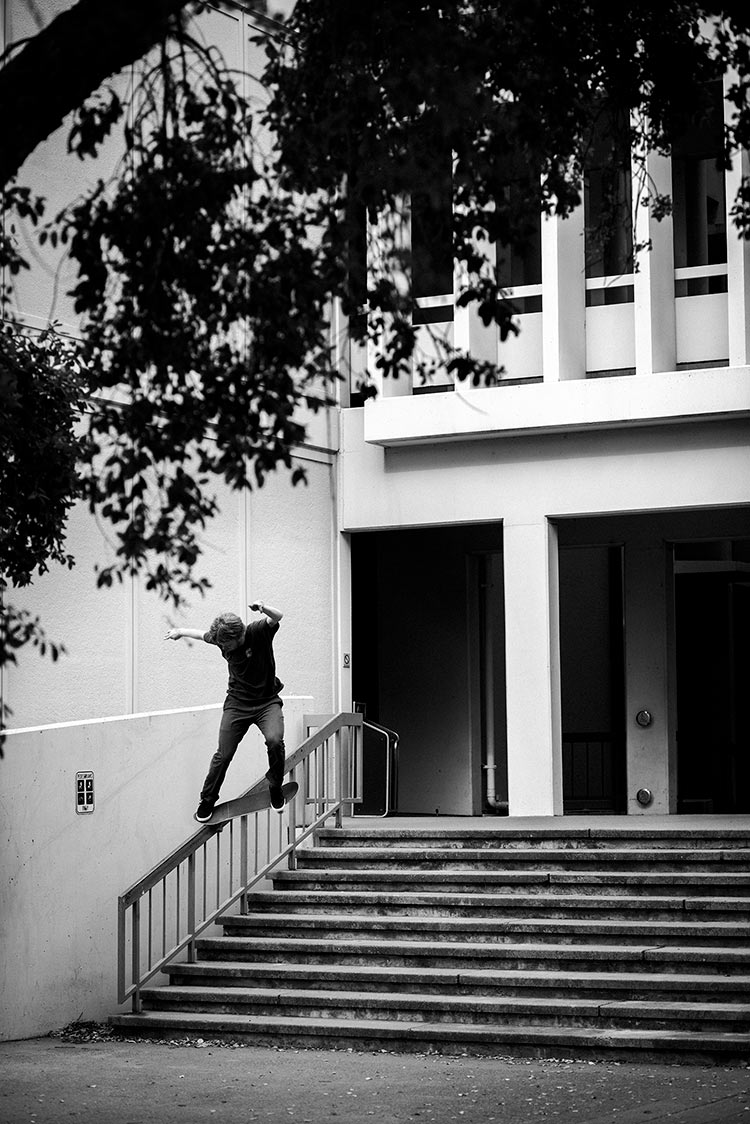 Jack gave this rail some shit real quick while an Earth Day festival was going on at this school. Then Goure said he’d lead us to a secret, but delicious, restaurant. We ended up driving 30 minutes out of the way to a Subway. I don’t think anyone was too thrilled. Pretty funny now, though. 180 switch crooks 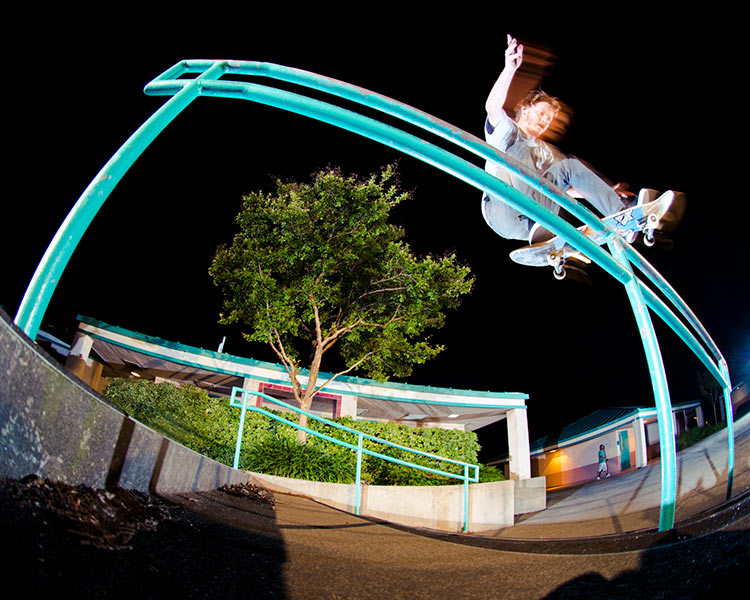 This rail was tall as hell to be flipping into and short as hell (in length) to be shoving out of. Jack Olson is bananas 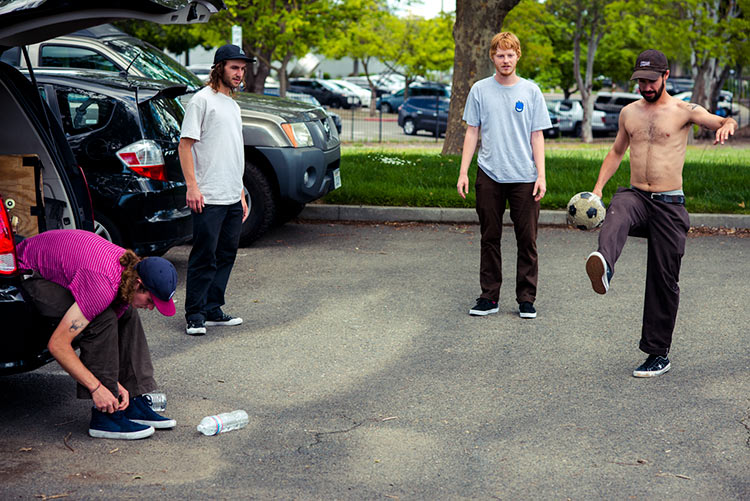 Lots of this to begin and end sessions along with waiting for Papke and I to tear down gear and put our shit in the trunk. A soccer ball is essential on the road 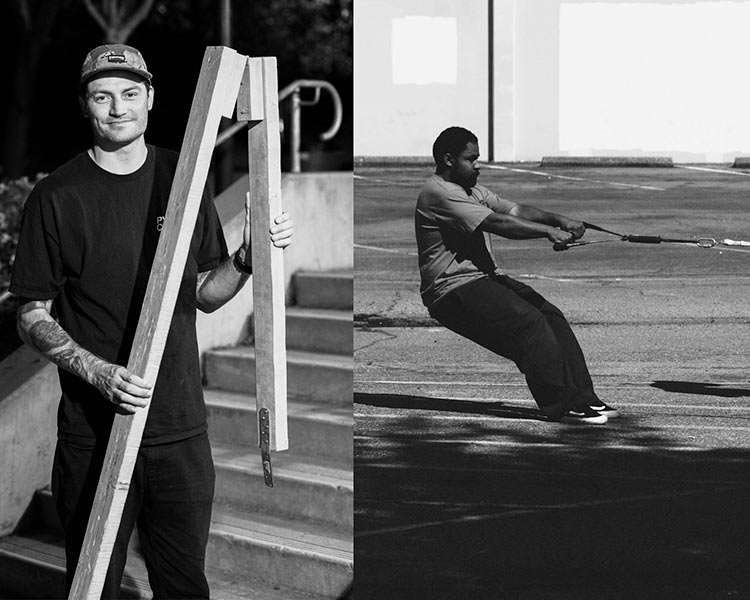 Austin Padilla and Jerome Neal are probably the most dedicated skate filmers I've ever met. Between the two of them, it seemed like every spot in Sacramento has had some much appreciated work done to it. Thanks so much for showing us around and helping out with alternate angles. And thanks to Thrasher magazine for the opportunity as well. Hope everyone enjoys the video!