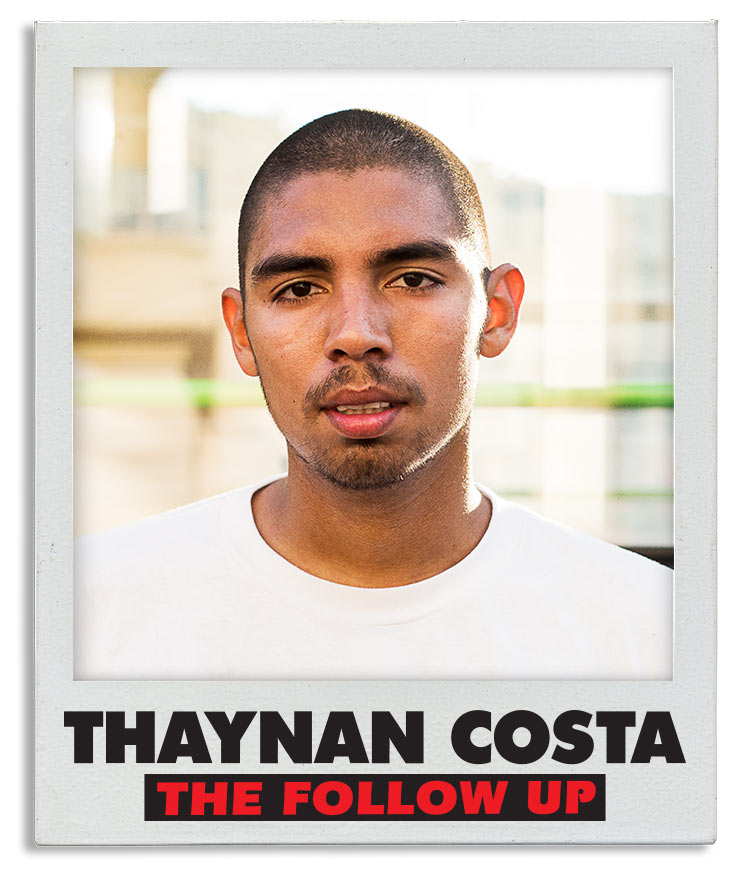 First off, congratulations on the pro board. Very well deserved.
Thank you. I didn’t expect it, but I was so stoked. We were supposed to film a day in the life with the enjoi team. We started skating at nine or ten in the morning, just hitting a bunch of spots in Barcelona and then we ended the day at MACBA.

So was it a surprise party? You went out after the session?
No, it was just at MACBA; there was a longboarder there. He had a longboard with my name on it. He kept getting in my way. So one time he tried this trick, like a kickflip or something, and the board landed upside down in front of me and I was, like, “What the fuck?” Everyone knew. There were so many people at the plaza and everyone knew but me.

So was he mall grabbing the board around you and trying to make you notice it?
Yeah, I was trying to film this line and he kept getting in our way. I was, like, “Dude. Chill out.” Then I saw the board. It was my name on the graphic but the board was so long it said, "Thaynanan." They added more letters so it would fit the longboard. 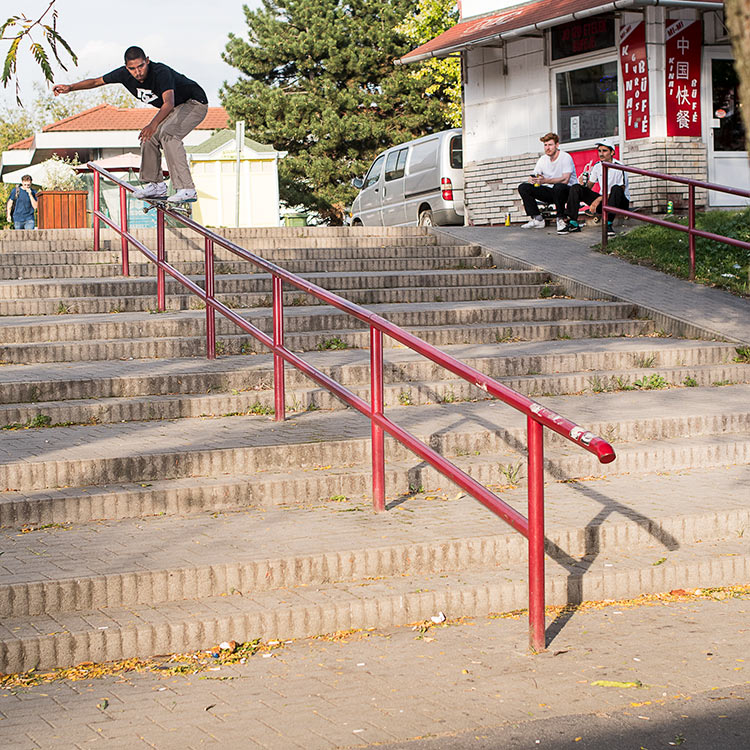 Longboards might be the wrong boards, but long rails always come correct. Backside 50-50 on the way to the pro ranks     Photo: Hammeke

So are you stoked you can now say you’re a professional skateboarder when someone asks?
I don't know. In my head, nothing has changed. You know, same thing, just skating with my friends and having fun.

So you’ve been living in Portugal but you’re from Brazil. How long have you been living in Lisbon?
About ten years. I lived in Brazil until I was 12.

So let’s say the Olympics come calling. Which country will you skate for?
I don’t really know if I would skate for either. If one will call, it will probably be Portugal. Because look at Brazil, they have Luan, they have Felipe, they have so many guys. I don’t think my name will come up. Maybe if Portugal needs someone, they will call, but I don’t know. I don’t know how it works. 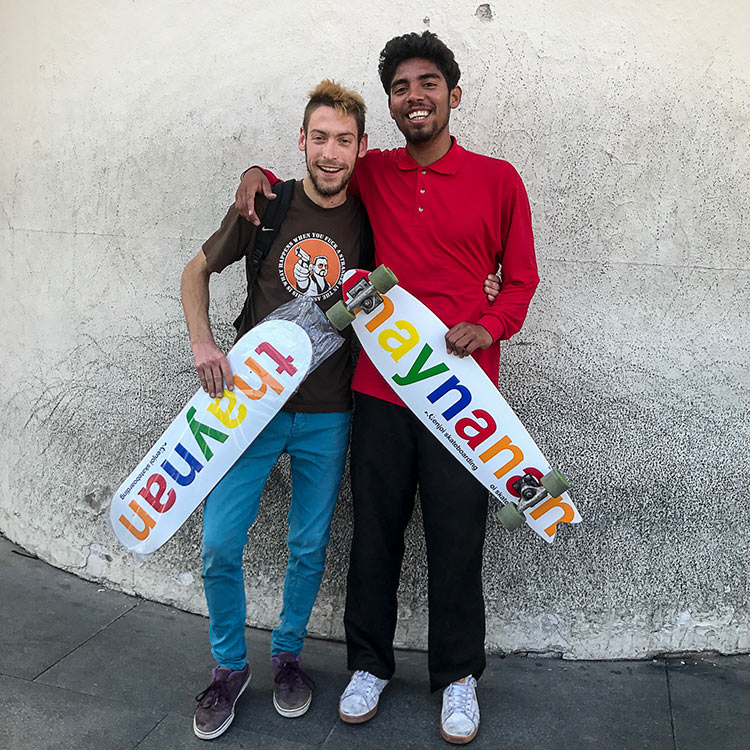 Who are some other pro skaters from Portugal?
Ricardo Fonseca. He used to ride for Cliché and Emerica. He was so sick. He still skates sometimes when he can, but he works and does other things. I used to go to the skatepark when I was, like, 13 and watch him skate. It was sick.

How much of your new part was filmed in Portugal?
Maybe, like, 30 percent. It was mostly Portugal and Spain.

Who pulled out the Eddie Murphy song for the part?
I was supposed to skate to a Brazilian song, but that didn’t work OUT. So Louie asked what song I would want to skate to and I suggested the Eddie Murphy one. Louie was worried it would cost too much, but he talked to the Thrasher guys and figured out a way to get the rights to use that song. I was stoked because every time we’d be on tour we would always listen to that song. The vibe of the song is super sick. I’m so happy it worked. 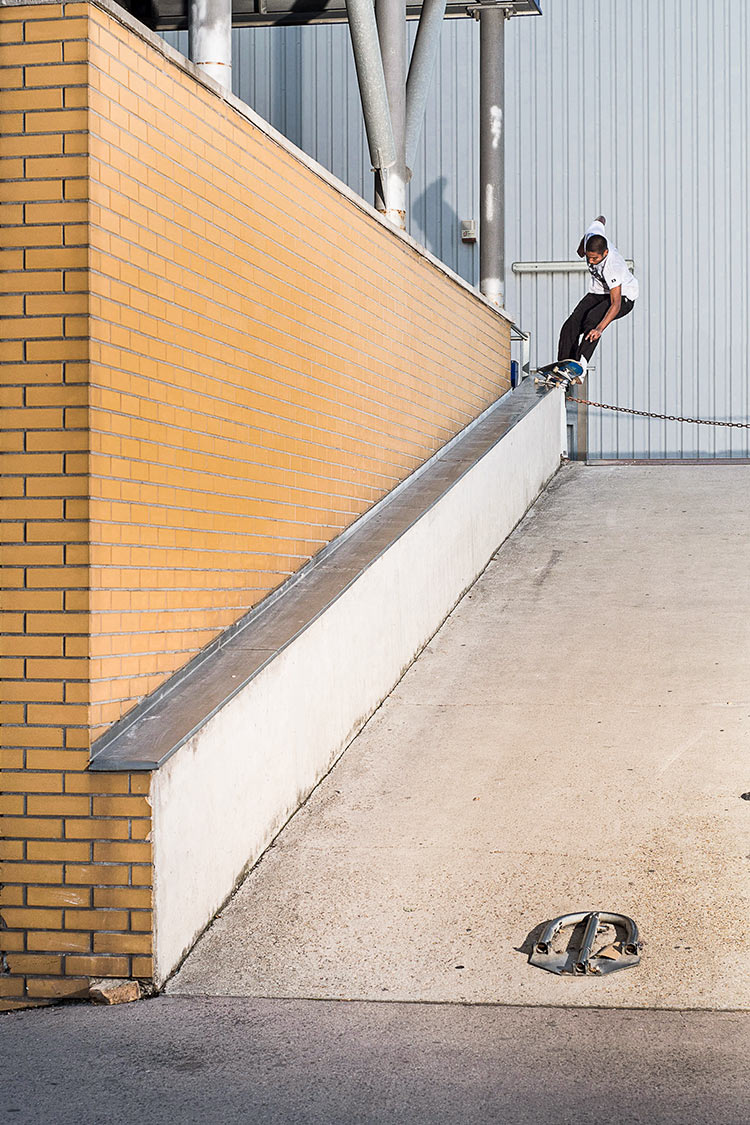 If downhill ledge lounging is in the Olympics, Portugal is gonna come calling. Chain ollie to casual 5-0     Photo: Hammeke

So tell me about your crew, the Ementa crew. What’s Ementa?
Ementa is what you say in Portuguese for menu. It’s a crew of skaters I became super close with when I moved here. Raphael Castillo, Andre Costa and a bunch of other homies. Over the years we’ve just always kept skating together. We do little trips, camping trips, and about once a year we try to put out a video. We’re filming for one right now.

So tell us about 7-Eleven pizzas. I heard when you were staying with Louie you ate almost nothing besides them for two months.
That was a dark time, dude. It was bad. I can’t stand 7-Eleven pizzas anymore. I just remember it was the closest thing to his house, you know, right on the corner. So it was so easy to just go there and grab a slice. I did that every day for at least a month. After a while, I couldn’t do it anymore. It was bad. I have never done it since.

So when you’re staying with Louie, what is some of the weirdest stuff he’s asked you to do?
One time he texted me that he needed me to eat a full spoon of cinnamon. So I was, like, “Okay.” I’d never tried that before. So I just filled a spoon with so much cinnamon. I put it in my mouth and ran straight to the bathroom, drank so much water. I sent him the video and he was, like, “Haha! Thanks.” That’s it! I think it was in the credits of Oververt. 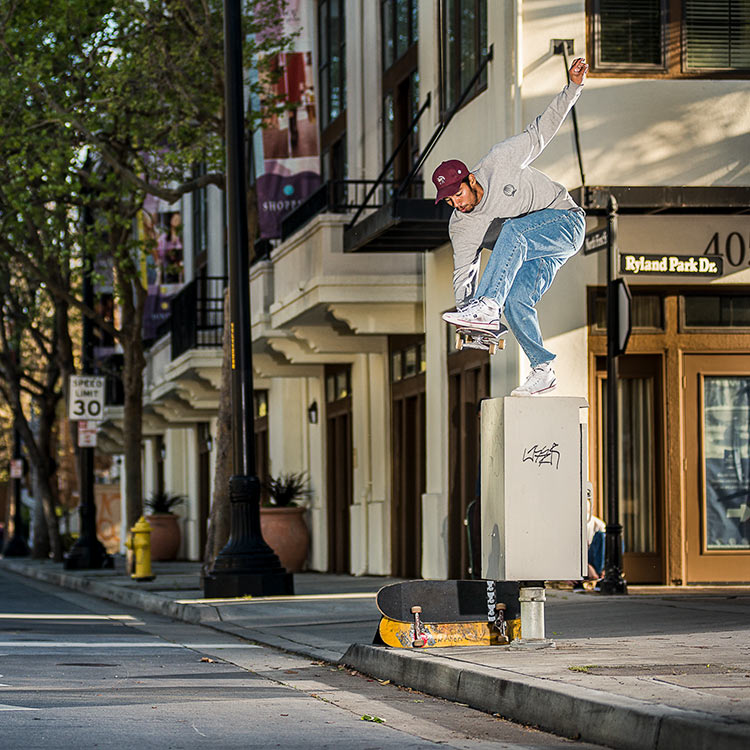 Grabbing a fastplant like a slice of 7-Eleven pizza, only with less shame     Photo: Tonascia

So one of my favorite tricks in your part was the body varial to switch backside 50-50. You’ve taken the BV to the next level. Who do you think has the best BV approach in the game?
Maybe Michael Pulizzi. He's gnarly. He’s so good at those.

What’s taking a body varial too far?
I think when people start flipping in and out and body varialing in the middle of a trick. Like, some guys will do kickflip back Smith body varial revert. When they do the body varial and the revert, it’s just too much. I think a body varial looks sick when it’s something simple. When you put too much on it, it just gets ugly. Simple is better. When people do bigspin flip back tail big spin flip or something, it’s so hard to make that look good. I think if someone just did a back tail backside flip it would look better. It’s the same with the body varial. Just keep it simple.

The other trick I loved was the mid 50-50 push. What made you think of doing that?
I remember I was hurt for so long, about six months, and I couldn’t stop thinking about tricks to do. I would go to bed and try to sleep but I would just think of tricks, and that was one I always thought about, like, could that be possible? Then the first two weeks I was back skating I tried it on a flatbar and it worked. I eventually found a rail to try it on but it took me so long just to do the front 50-50. Like, 30 minutes just to 50-50 because the ground was so bad. I thought it wasn’t going to work out if it took so long just to do the 50-50, but then the push worked in, like, four tries. I was so stoked. 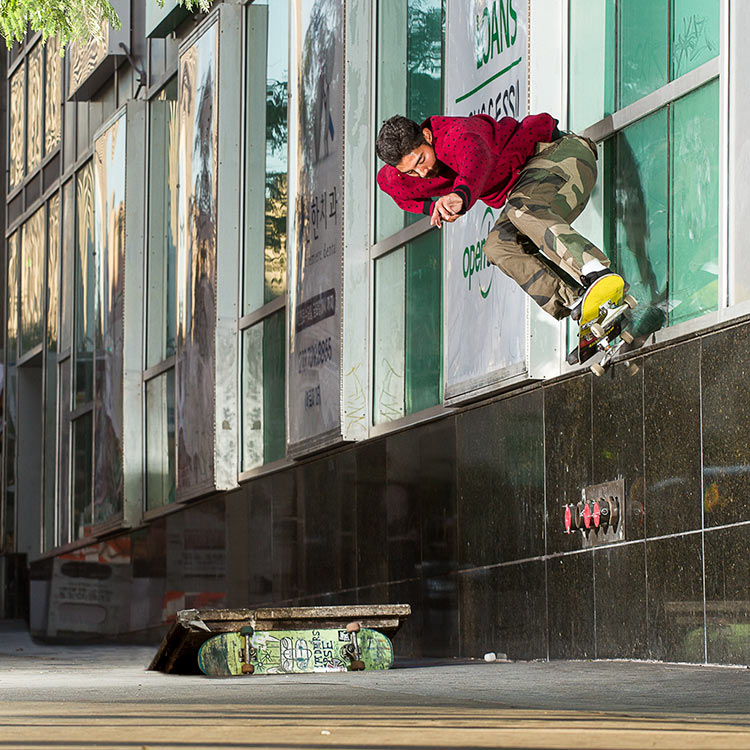 Tell us about some of your photography. When we were in Africa I never saw your camera leave your hip. I hear you’re also really into making collages.
I really like to take Polaroid photos and whenever I go on trips I like to bring the film camera. I never develop a roll of film right away. I’ll wait until I kind of forget about it and then I’ll just pick one or two out of maybe 30 or 40 rolls of film that I have in my closet. It gets me hyped because it will be a surprise and sometimes I won’t even remember when or where I took the photos. I really like the surprise. I still haven’t developed the photos from Africa. And the collages, I like to just hang out with my friends, put on some music and make collages. We’re talking about doing a zine in the future, hopefully.

The zine should come with one of your boards!
Yeah, that would be sick. Give the idea to Louie.

So another question I have from your part: Orange pants? Where did you get those things?
Oh, man. I’m hyped that people did hate on that.

Who rocks the wildest pants in skating right now?
I really liked when Gilbert Crockett was wearing those huge-ass pants. Those were fucking sick! I was so stoked on those. There’s some guy from England, I don’t know his name, I saw it in that Regulate edit, Sam something? He has the best pants, dude. I want to buy pants from him. It’s so hard to find good pants, you know? Like, pants that not everyone already has.

What do you have planned for the rest of summer?
We have two DC trips coming up in Europe. We’re going on tour right after Street League for about ten days and then in June we’re going on a tour through, like, seven countries around Europe. Then I’ll be going to Copenhagen and then there’s an Enjoi trip around Europe.

Does DC still have the apartment in Barcelona?
I wish! Not anymore. That was more for the Embassy when they had that. 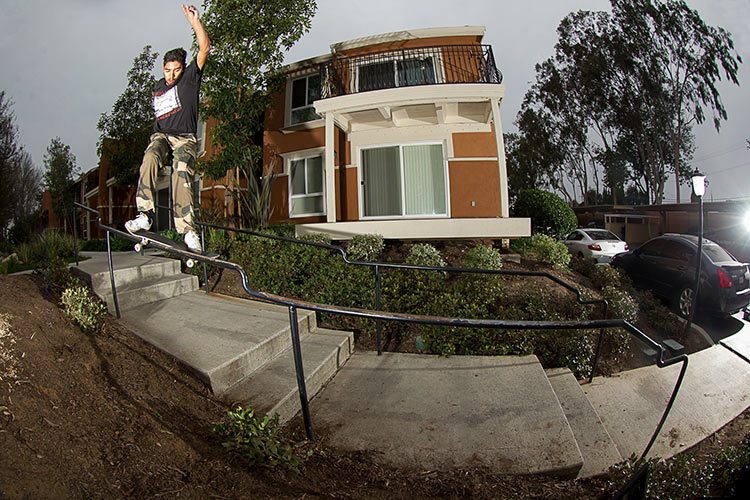 Ain't no gap out going on here. Smith drop to Smith on the eternal search for good pants     Photo: Karpinski

How long did you stay at the apartment?
When I went there for the first time, I was supposed to stay for three weeks. I ended up staying for at least a year. It was the best time! I was 16 or 17. It was so sick. I didn’t get hangovers back then, so it was the best. Party all night, skate MACBA all day. Such good times.

So, anything else? I hear you have a DC/Enjoi color way coming out?
Yeah, that comes out in September. I’m stoked. It has some clothes, too, like a shirt and a hoodie. It’s a little collection. It’s really sick. I hope people like it!

Any other projects?
We have a DC promo coming out in September/October. so we’re just going to be working on that. Maybe do something with my friends here in Portugal too.