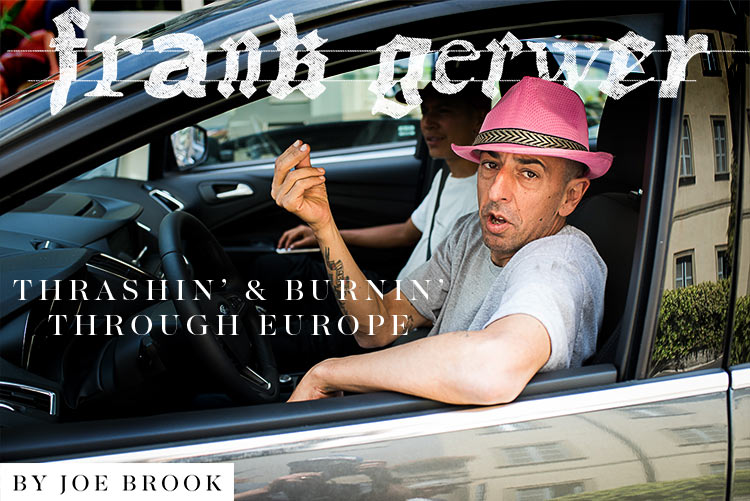 You're a road vet, but a lot of chaos happened on this trip. How do you deal with it?
Oh, I just let it happen. It's fun. You know how it is, you just let the chaos happen and enjoy it.

Just sit back and and see what happens next.
Yeah, you just sit back and watch it unfold and enjoy what's going on. That's what these trips are: chaos. That's skateboarding; it rules.

Does Thrash N Burn live up to its name?
Yes, every time.

It never falls short?
No, never. Just when you think it's not gonna get crazier, it gets fuckin’ crazier.

What are your trip essentials when you go on a trip like this? You just carry a small bag, right?
Yeah, we stayed in hostels on this one, so I just brought a small bag. I didn't do the sleeping bag or sleeping mat. What was it, two weeks? I packed a week's worth of stuff so I could do laundry. About five shirts, four pairs of underwear, ten pairs of socks.

How many boards?
Alden packed a lot of boards, so maybe I'll take one. I usually take one extra board with me, but this time Alden packed them so there were boards there.

How was it when there were four cars and you had to drive one of them?
That was pretty rad. It was a little bit weird. It was like this weird little Euro caravan we had going. It was pretty wild.

How was it driving through the French Alps?
Dude, that was one of the best parts. I've done it before, but this time when we got out and we were throwing snowballs and shit, it was awesome. It was epic. You’re seeing lakes; you're seeing a lot of shit that not a lot of people can see, right? 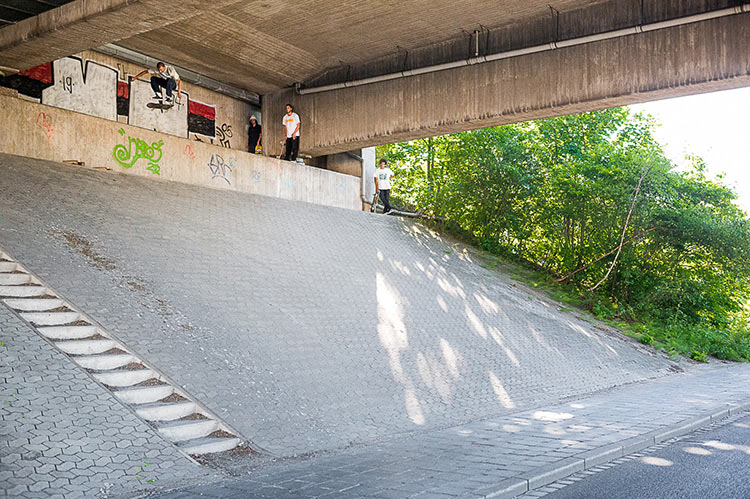 After Wallenberg, all other kickflips are cake. Troll-staus plunge into the bank via Frank

Yeah, it's like fairy-tale shit, right?
Yeah, it's full on fairy-tale shit. And then you're up in the mountains throwing snowballs with your friends and you drive down and you go skating. You see the most insane crystal-clear lakes and it's just fuckin’ insane. You have the van just pulsating on its own, just running on its own vibe. The van just runs on the energy inside it and I swear if you don’t gas it up, it'll still go. It'll just run on chaos. The van actually runs on chaos.

What do you think of Cory's in-van decorating? What was going on with that?
We had a pretty mellow decoration. I think they had somewhat of a little foliage, but nothing too crazy. I think it was more of the natural landscape. That's what he does: natural landscapes.

So whatever's in the surrounding fields ends up in the car?
Yeah, you know a bush might end up in a van, roses, flowers. Something that will smell good, even if people are allergic to it. People were into it.

What do you think about the guys going to jail? Was that weird?
Nobody went to jail—next question.

What was your favorite place to go to on the trip?
Oh, when we ended it in Prague, I think that was the best part of it. Yeah, Prague was sick.

How was it rooming with the Phelper?
It was awesome. He was mellow. I don't even know if he snores. I'm usually asleep so quick it doesn't matter who's in my room. As you're talking to me, I'm going to sleep.

What are some of the highlights from the trip?
Oh, Cory and Raven's back-to-back 50-50s on that huge rail. That was sick.

How were the demos?
Mindblowing. If you were a kid and you saw one of those demos, you would be, like, "That is insanity." You would be blown away. Honestly, you'd be talking about that demo for the rest of your fuckin’ life. It was epic.

How was it with so many people skating on the trip? Was it weird with 18 dudes or whatever we had rolling up to the spot? Was it, like, “Shit, this is crazy”?
No. I've done these before with everyone, so it was fine. It is what it is; it's a traveling circus. We bring the chaos. We shut it down and then we're off again.

What's up with sobriety on trips?
Oh, I come home and get hammered after.

So you keep it tight when you're on the road?
Yeah, I'm just sick of being hungover on the road. I don't always keep it sober on the road. I just pick and choose my battles. On the road sometimes there are battles that can't be won. And I had to drive a bunch of the time.

How was it with the newbies? We had Evan and Louie Lopez. It was their first Thrash N Burn. How did they do?
They killed it. Zion too! Yeah, that was his first one too. Dude, they just need to remember to put their bags in the van and everything will be fine.

Frank kept it clean on the trip but this nose manny was totally spun out. Nose wheelie nollie front-foot impossible, controlled chaos

How was the star power with three SOTYs on the trip: Ishod, Grant and Kyle Walker?
Oh, man, it's heavy star power. When you skate with dudes like that, you’re not really thinking about it. But every once in a while you're, like, “Oh yeah, that's why those three are SOTYs.” But it was pretty mellow. You kind of expect them to be that good, you know?

The Zurich demo was fucked.
Oh, the Zurich demo was nothing like I've ever seen before in my life. If I was a kid watching that demo, I would be, like, “Holy shit! That was like a video. I just watched a full-on skate video right there.” That's the one I was talking about, the Zurich one, the one where they did three demos. They did a street demo, then went over to the bowl, did a bowl demo, then went back to the street and did a street demo again. That was ridiculous.

Zurich got their money's worth.
Yeah, Europe got its money’s worth. Those demos were insane. Heavy presence.