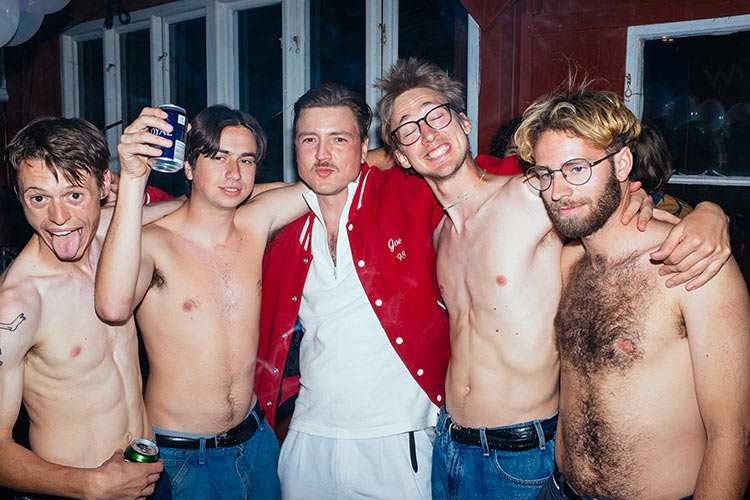 Unbeknownst to us Americans (and one Canadian), is that McDonald's overseas is much better than the version as we know it. I had yet to give it a shot, but after we touched down in Paris I fell in love with this beast version so much that I ate it practically every night for the rest of the trip. We met up with Paris’ own Vincent Touzery, Stingwater’s Daniel Kim and John Francomacaro and headed to Republique where we spent the rest of our first night. We all awoke with a hunger in our stomachs, a hunger so strong that could only be satiated with clips! Unfortunately, Chris “My Ankle Hurts” Milic was still sidelined with his water-log condition. We headed straight to Gare de Lyon where Frankie utilized the half quarterpipe to his advantage, using it as a mini mega ramp to launch down a mellow ten stair. From there Vincent took us to meet up with his scooter friends at a nearby manual pad. The session was heated as I, alongside the scooter homies, walked away with enough clips to last a few years, but we decided to only use a few each in the video. But enough about myself! 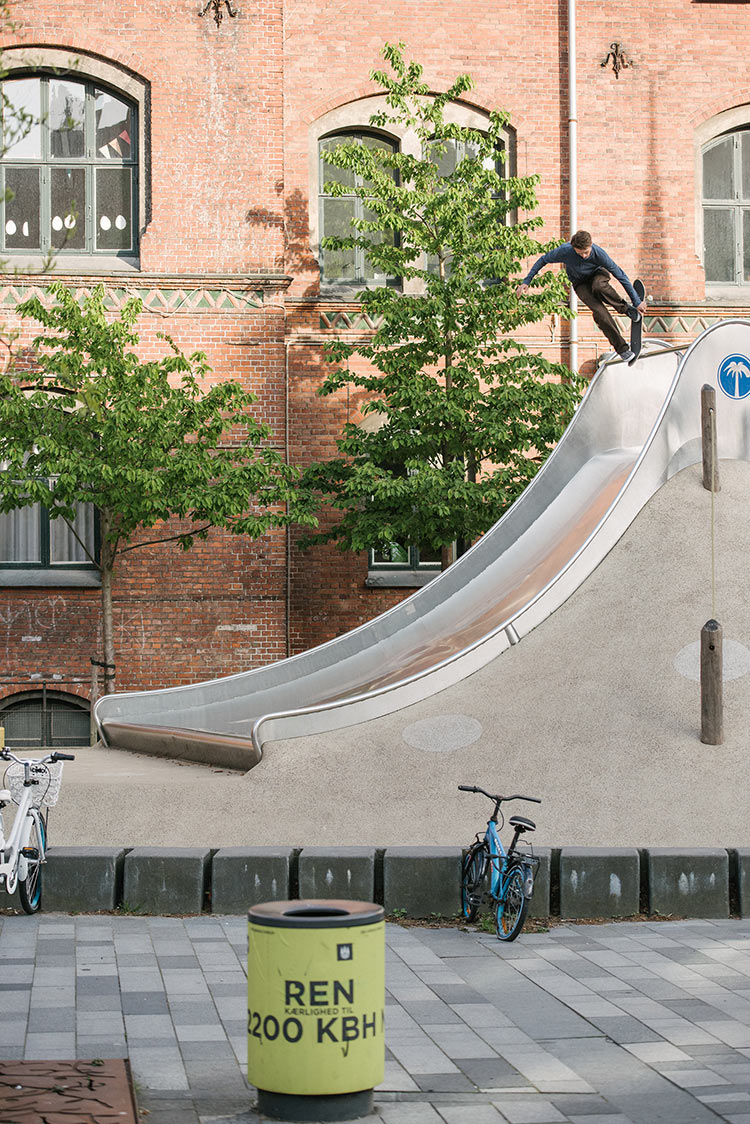 Frankie Decker, Freddy Gall into the slide right off the plane from New York. This is how we durum! 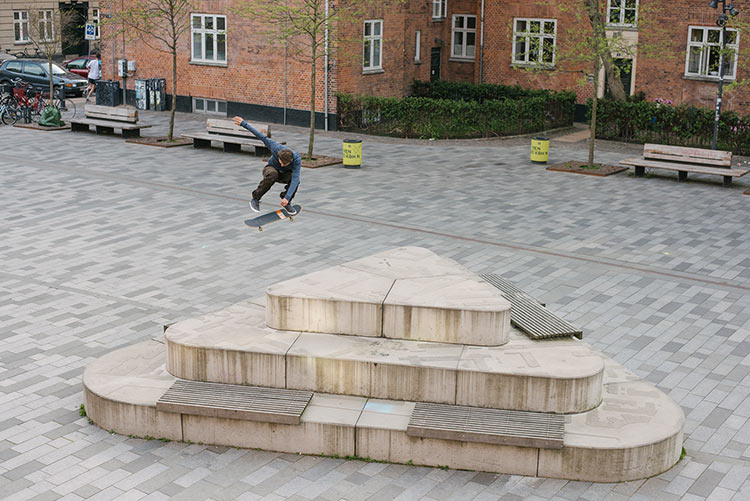 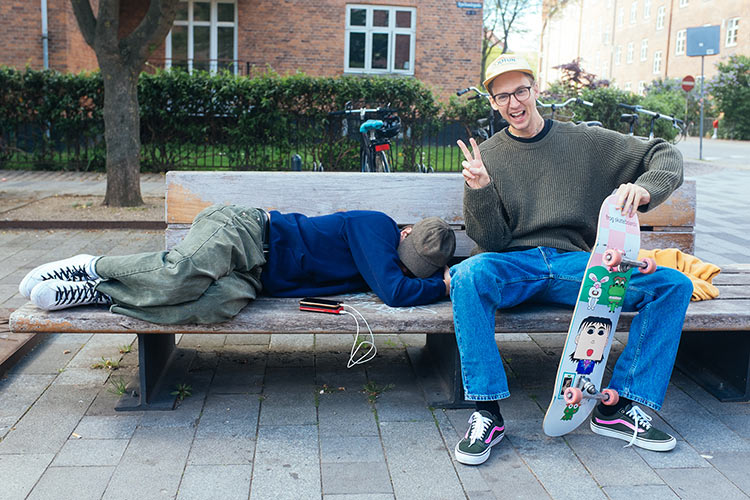 Jesse and Chris at our lovely AirBnb 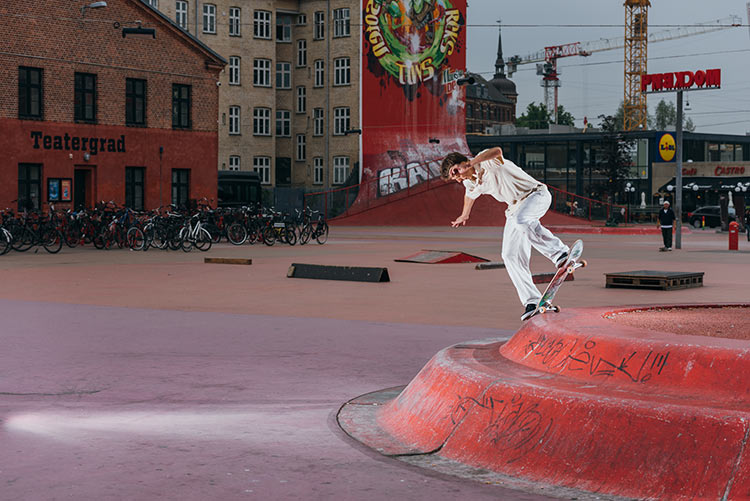 Frankie, wallie from low to high backside noseblunt slide to fakie. Very mind blowing this one!

This past May, Chris “My Ankle Hurts” Milic, Patrick “Pat” Gallaher, Frankie “Krazy Frankie” Decker, Colin “Upstart Photo Phenom” Sussingham and I proceeded to venture into the abyss of the European cities of Copenhagen, Malmö and Paris. We took a redeye flight from New York City, and right off the plane we stumbled upon a slide from heaven with a rail placed perfectly at the apex. Tail-drop time commenced. Then we headed to our AirBnb, dropped off our bags and met up with Copenhagen’s finest: Hjalte, Tao, Hugo and Peter joined by Paul Grund, Roman Gonzales and America’s very own Andrew Wilson, who we ended up skating with the rest of our stay. What we dumb Americans didn’t know is that bikes are a life hack in Copenhagen. The locals encouraged us to find some for ourselves as they make getting around the city much easier than skating from spot to spot. Lucky for us, after a late night in Malmö (thanks to Pontus), we each found a bike at the train station. However, getting to Malmö wasn’t as easy as planned because we lost Chris and Pat at the station. Instead of finding WiFi and letting us know where they were, they decided to get on the train to the CPH airport. After searching for them for an hour, I got a text saying they were on their way to Malmö and we should just meet them there. Thanks, guys. 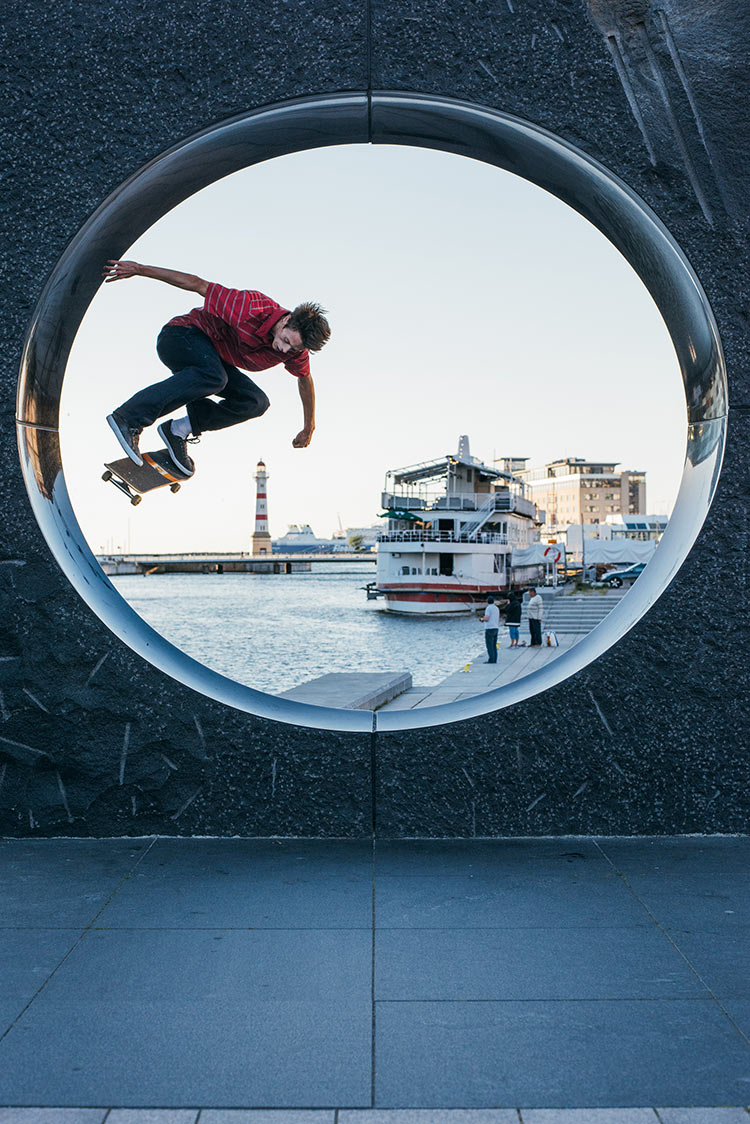 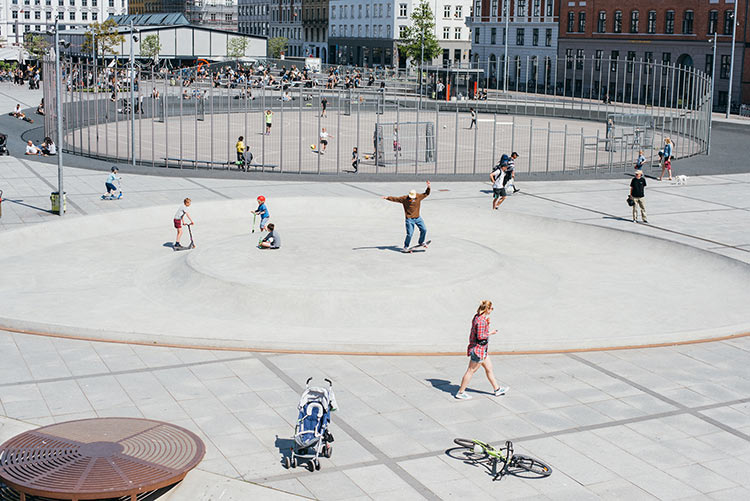 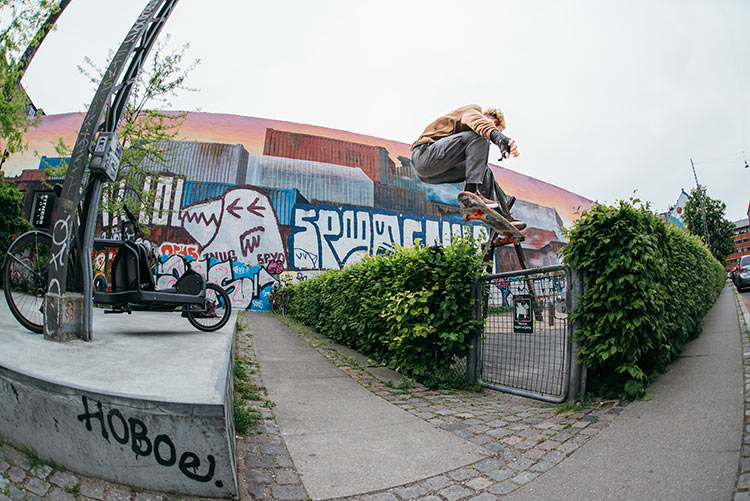 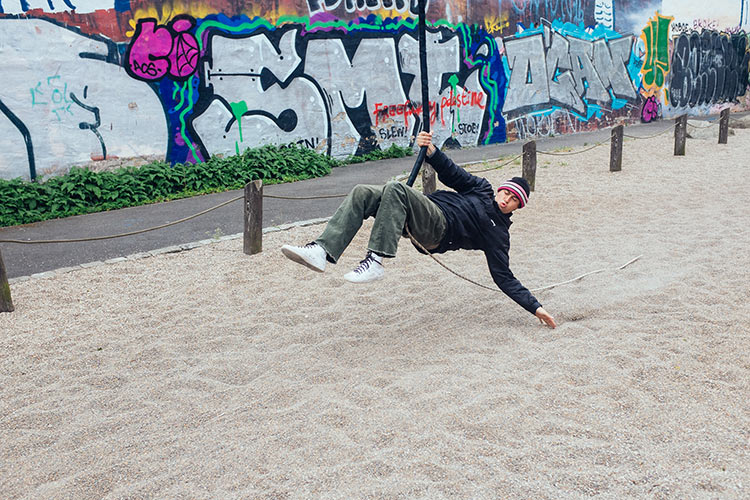 The legend himself, Pontus Alv, met us at the station and had a big day planned. First stop, the liquor store, followed by a brief stop at Polar HQ (pretty beast) before a session at the Train Banks. After a dozen wallrides (oh yeah, oh yeah) we headed to a private party equipped with two frozen margarita machines and a blow-up pool filled with Tuborg. After hacking into all of the beverages before us, we found ourselves back in CPH as the sun rose for our final day before heading to Paris. For some odd reason, Chris “My Ankle Hurts” Milic thought it would be a good idea to boneless into the waters of Kobenhaven a few hours before boarding our flight to Paris (and lo and behold he only brought one skateboard and one pair of shoes). After securing his glasses to his hat, he plummeted into the water, perfectly water logging his board and soaking his suede old skools just in time for a week in the city of lights. He spent the rest of the day barefoot, even at the airport! Goes to show what the Frog skateboards team will do just for a clip, because if there isn’t footage, it didn’t happen, bitch. 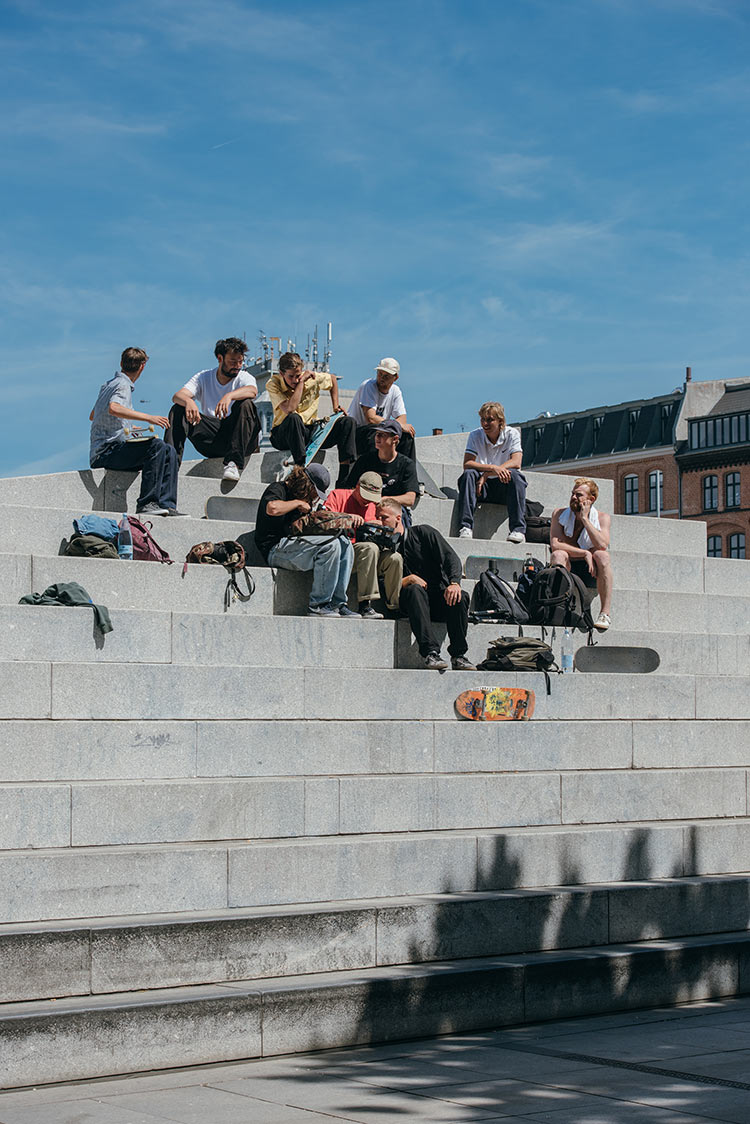 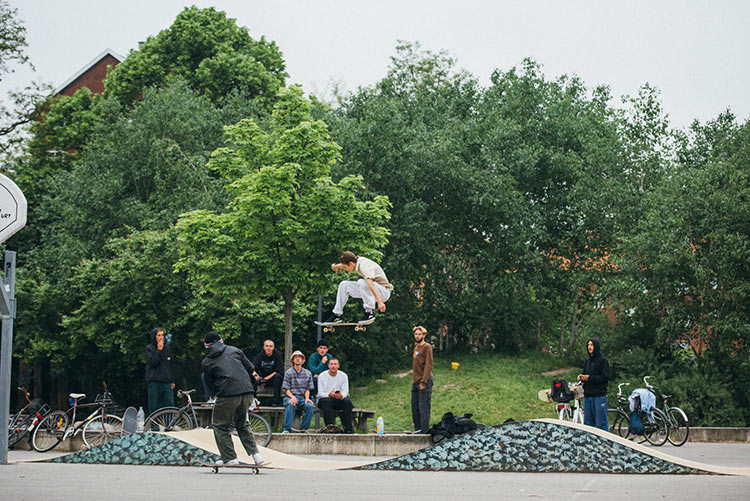 Frankie, Boost Mobile ollie from bump to bump. Fucking gnarly this one! Possibly an mp3 at this spot, according to Hjalte 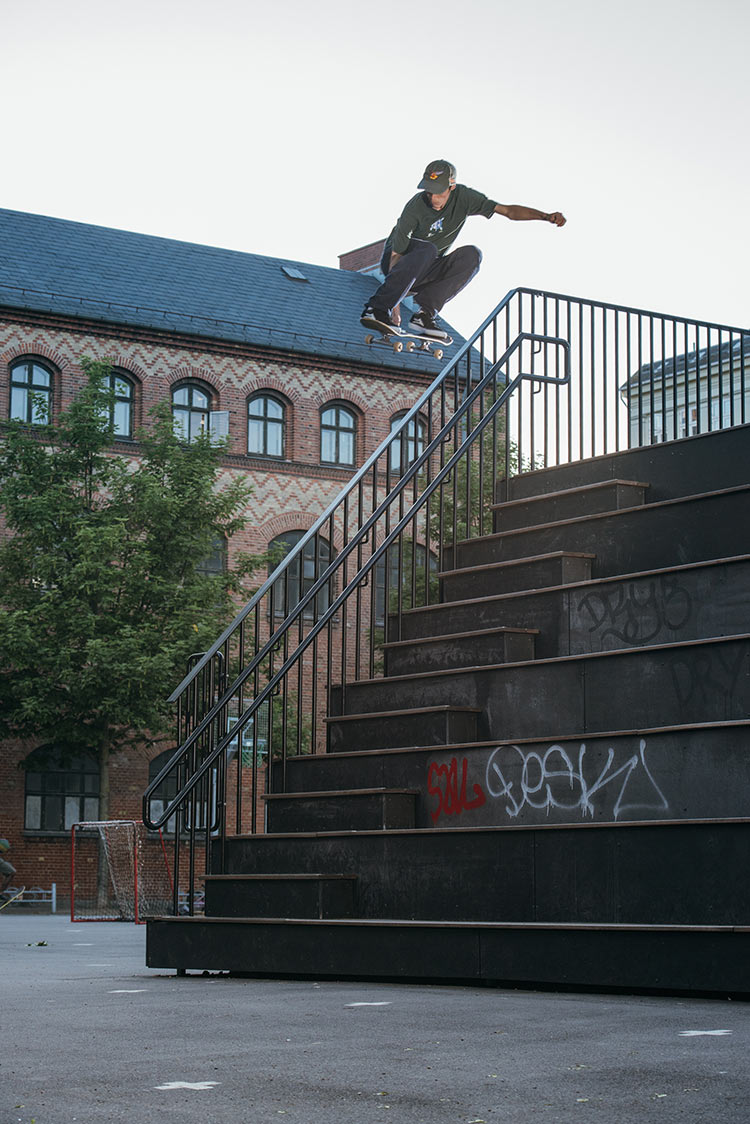 Melon grab straight into the depths of hell! We jokingly told Frankie to ollie this and, lo and behold, he melon'd the shiz out of it! 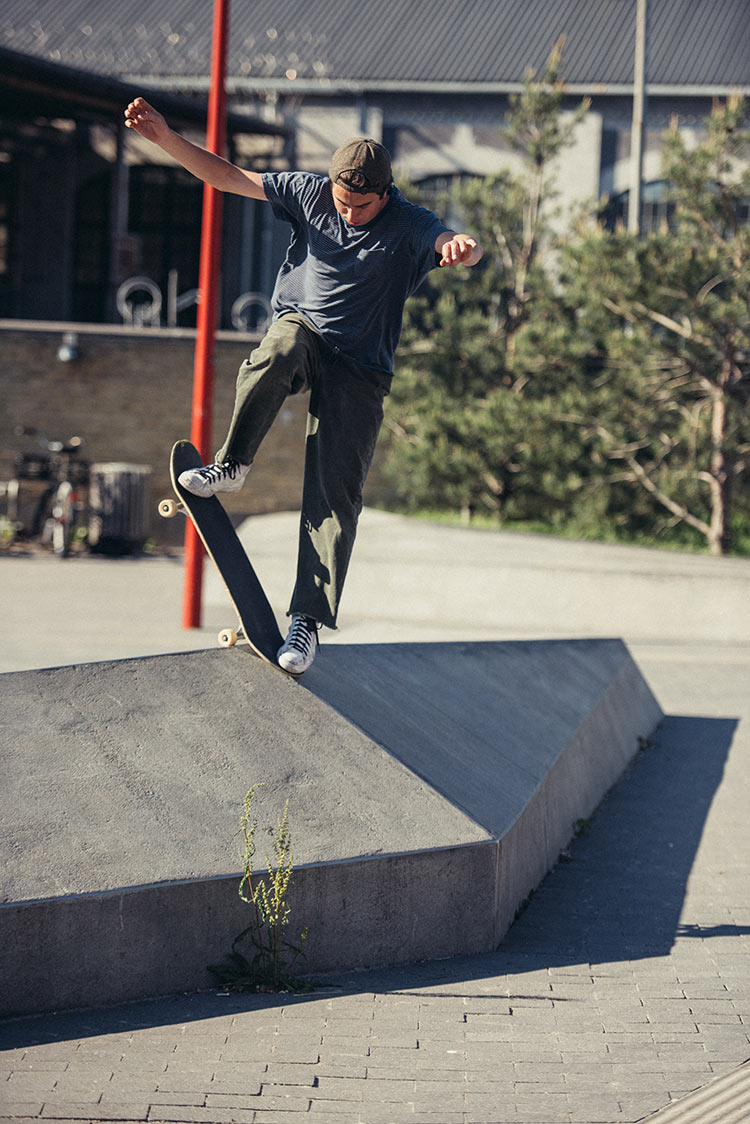 Jesse, ride-on noseslide transfer into the bank near the world's largest soccer ball 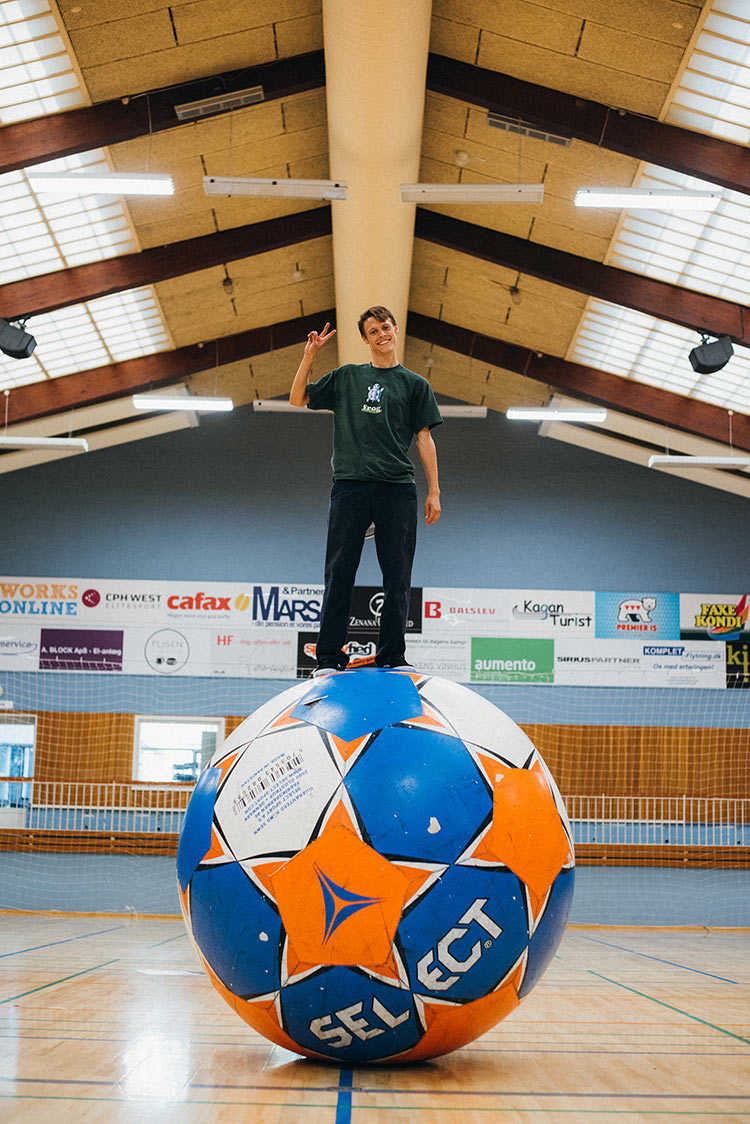 Frankie on the aforementioned ball. Unfortunately, a wingus was lost in the making of this photo 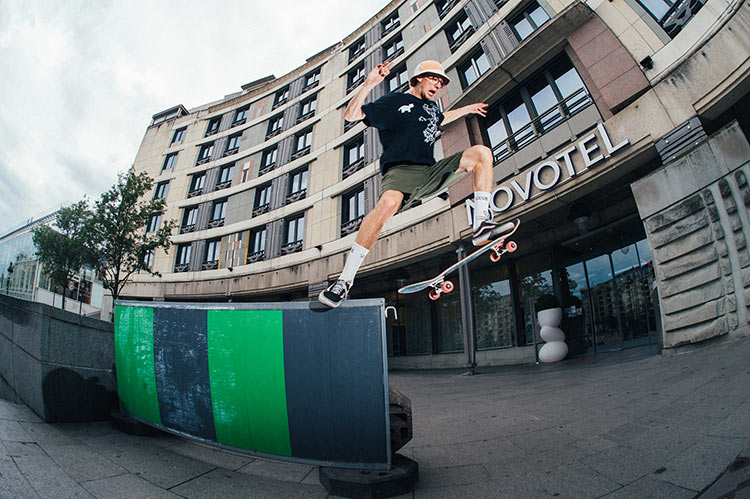 Crango, 50-50 step-off ollie out on a sketch-mode flatbar he rigged up at Paris's Gare de Lyon. A heavy session spawned on this bitch. Come on!

Confusion struck later in the evening when Colin “Upstart Photo Phenom” Sussingham’s camera bag went missing from a local watering hole. Luckily, Colin had backed up the photos from the trip and had insurance on his gear, but alas, his bag was stolen along with the photos from the day. Down but not out we headed back to our AirBnb with only one object in mind: to watch the Woody Allen classic, Midnight in Paris. After Yeah Right! alumni Owen Wilson lifted our spirits, we each made a promise to wake up the next day level headed in hopes for some NBDs at the famous Le Dome plaza. The next day we arrived to find one of Frog’s favorite skaters of all time, Corey Duffel, at the spot. He remembered Frankie (who was flow for Foundation for a short period) and we all said hello before clocking into work. Frankie proceeded to do a variety of tricks down the double set that blew us all away and scored a high five from Corey after riding away from a kickflip backside body varial. Pat, unfortunately, couldn’t roll away from a simple kickflip 50-50 on a curb, but I digress– 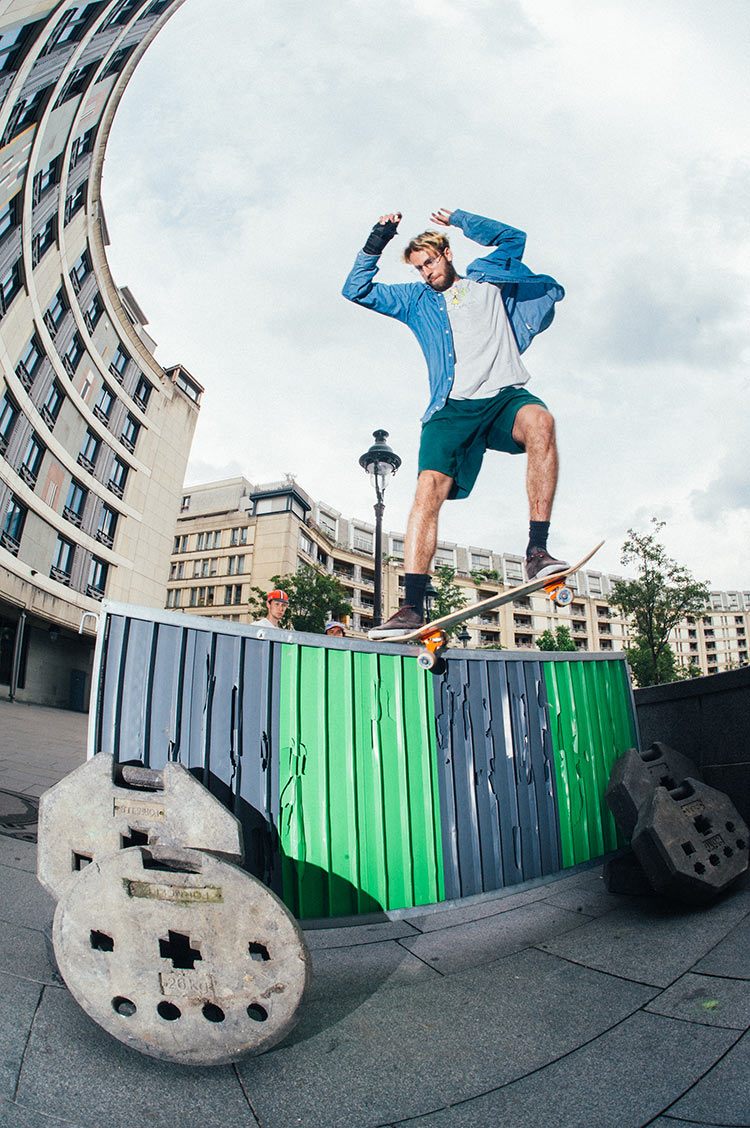 Sketchy Pat, swizz crooks like a boss to test the waters after Crango rigged this bastard up 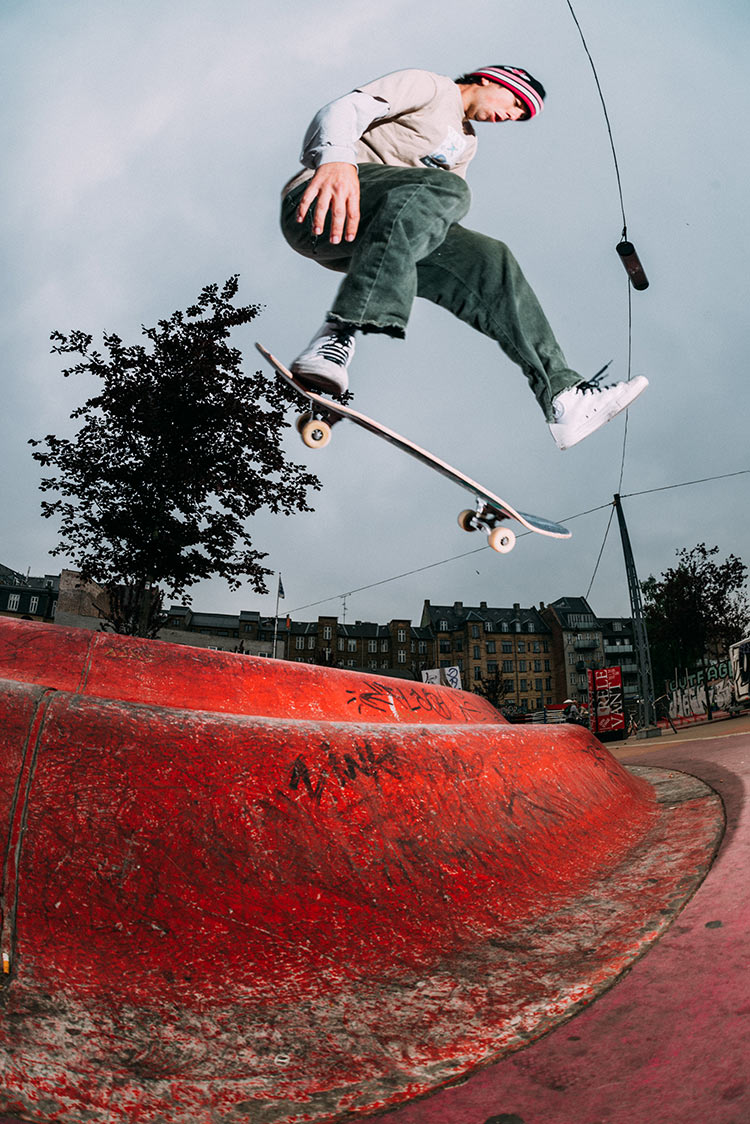 Jesse, backside ollie one foot on the red banks, inspired by CPH's own Hjalte Halberg. So spicy! 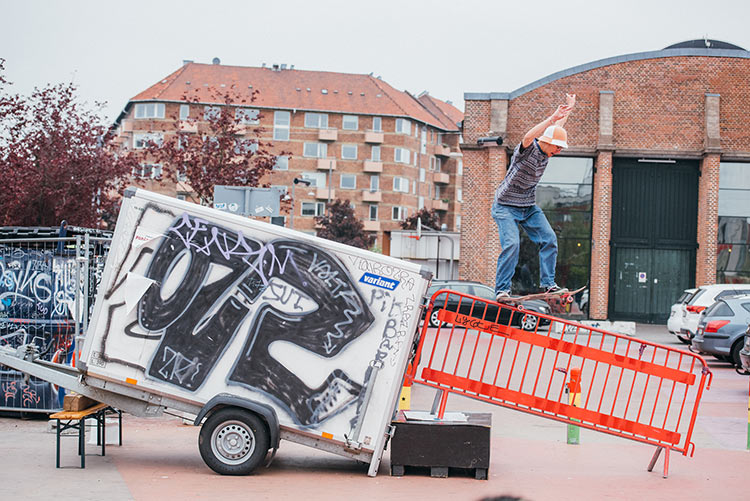 Milic, drop-in ride on 5-0 on another crazy concoction of his. Fucking sketchy this one!

We left Le Dome in search of some nightlife and remembered that there was a surprise Volcom party happening. Frankie and I hopped in a car with Vincent and Greg, and after naming three countries that start with the letter D, security let us through the door. We proceeded to the dance floor where Dustin Dollin appeared out of nowhere—crowd surfing! Everyone was stunned! The next day we got up and headed back to Gare de Lyon where Chris rigged up a sketch-mode flatbar off one of the ledges. Then we split off with Franco and found one of the best drop-in rails we’d ever seen. Chris and I battled it together, hoping to grind the whole thing but it just wouldn’t budge. It was our last night and we all gathered at Ben Chadourne’s AirBnb where their were an infinite amount of Heinekens for us to enjoy in order to be perfectly hungover for our flight back to New York. We had a blast and someone even scored an NBD on our route home—which, unfortunately, we cannot reveal until Killer Skaters 3 drops. Our trip was amazing and it wouldn’t have been possible without help from all of our generous friends. Also, a big thanks to Thrasher for making it all happen! Savoir! 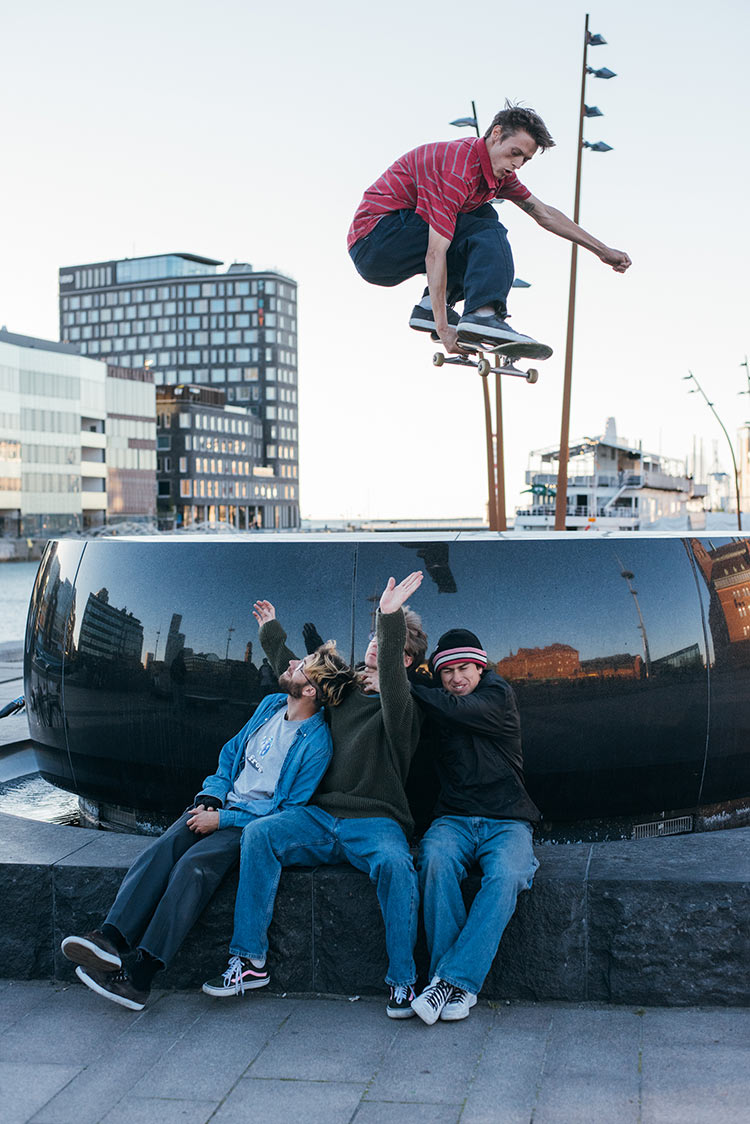 Frankie with a quick throw down melon over the Frog team on the way to Pontus' beast party in Malmö. Frankie spiked us all off and even decided to backside flip off this sucker (first try) for some Tuborg. Come on. You gotta do it! 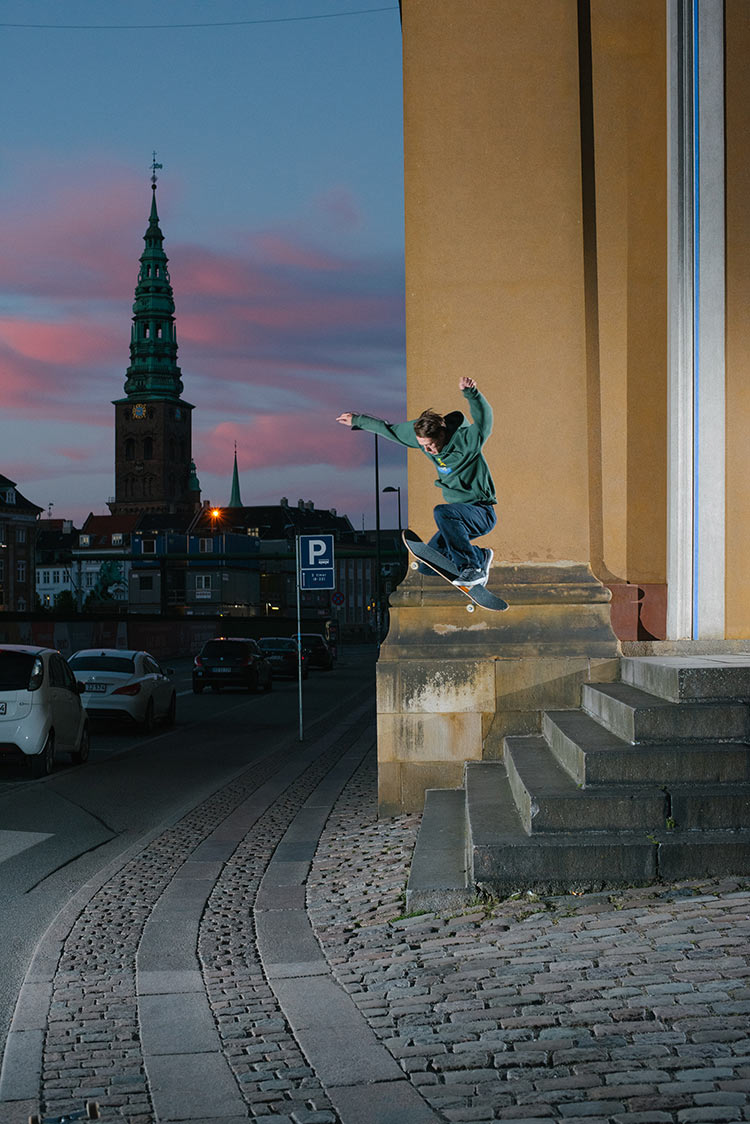 Frankie, no comply with a view straight from heaven in CPH—then straight to a Tuborg session on the water with Copenhagen's finest