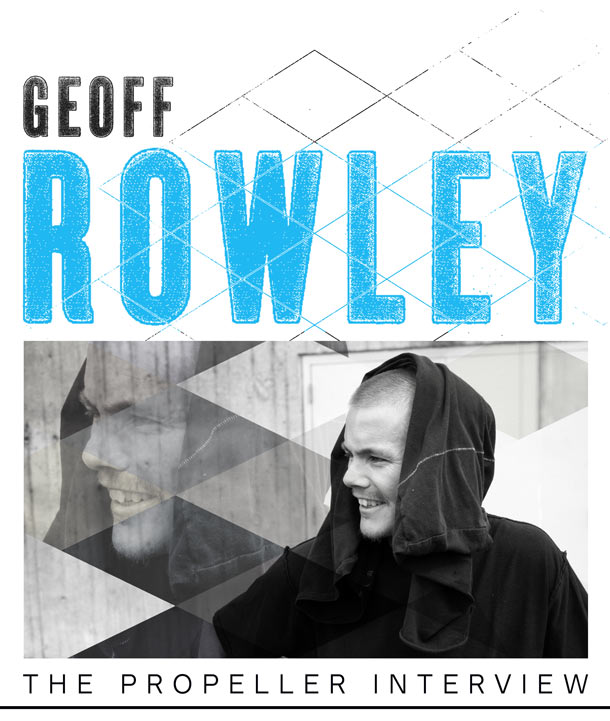 You said that you’re the most exhausted you’ve ever been in your entire life. What’s going on? Why are you so tired?
Skating. Skating the same amount as I did when I was 22 except now I’m 38 years old. Pretty much! That’s the truth. I’ve had some injuries in the last four years but I feel really good right now—right at the deadline. I had ankle surgery, I had knee surgery and I had that lacerated kidney in my back when we were out shooting on that roof. So physically I’m a little bit destroyed at the moment but that’s skateboarding. It goes in waves. You’re healthy and then you’re laid up. We’re just giving it everything we’ve got right now. Just been skating a lot and really enjoying my skateboarding. And that’s why I’m so exhausted! I need a vacation! 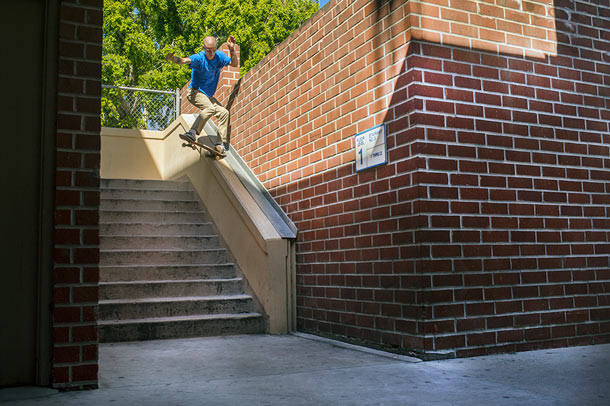 I would think that just skating would be a full-time job, but you’ve got a few other projects going, right?
I’m partner in a knife brand called Civil Ware and we make knives, tools and gear—but it’s practical gear for use in the field or in the city. I started that brand because I spend a lot of time in the outdoors and I enjoy all aspects of the outdoors. I like pursuing animals and studying animals and hunting animals. Not only do I enjoy that time, but it keeps me fit. It keeps me really fit. And as I’m getting older and trying to film these crazy videos that are long-term video projects and very physically demanding and abusive it’s all the more important that I stay in shape. So two or three days a week I wake up at 2:30 AM and 3:45 AM to drive up into the mountains. That’s the training I do. I don’t go to a gym. I walk up into the mountains with packs on my back. I’ve been doing that so much in the last few years and with one of my friends in particular so I’ve been helping him start his outfitting business—his independently-guided outfitting business. His name’s Jake Franklin, he’s 24 years old and in my humble opinion he’s one of the best outdoor guides in the world. His track record speaks for itself. He’s guided in over 60 desert bighorn sheep—the current California state record. He’s tied for the Roosevelt elk state record, and he’s only a young kid. So when I started to hunt with him I realized I had a lot in common with him. He’s more interested in learning the dynamics and logistics of the mountain ranges and what live in there than just shooting the animals. There’s more to it. That’s part of the harvest and part of the cycle of life. So me being part of the outfit business, I started to guide. And so he’s been training me in all manner of field work; map reading or just understanding the vast mountain ranges of California. Which we do have a lot of vast mountains. As you know, out in the Mojave desert is a perfect example of that. You have fingers of mountain ranges that are separated by flat, open deserts. But there’s a lot of life in those mountain ranges. But it takes a lot of time to get to know those places because it’s so big. So I’ve spent a lot of time out in the field in the last few years pretty much trying to learn every side of the San Bernardino mountains heading out to the Mojave along with the White mountains and everywhere in the Owens valley. I don’t know if that answers your question, but that’s what I do outside of skating. I’m still involved, obviously, with Flip and we’ve just turned Matt Berger pro and just finished editing his part a few days ago. That’s pretty much what I do. Obviously I’m a family man, too. When I’m not skating I’m working on products for Civil Ware or I’m working on projects for the outdoor business which is called Kika.

I know you’ve driven cross-country to find a ditch or pipe only to find it full of water. Have you struck out more hunting skate terrain or hunting wild beasts?
Both! Both have their plusses and minuses. An example is we hunted lions for five years and never got one. And then we got three in 12 months. I don’t mean I shot three, I’m just telling you we went for five years on separate trips and we didn’t catch the animal. I’ve had plenty of trips where I’ve driven 20 hours and we get there and something’s wet. And then we turn around and drive back. That’s going to sound absolutely ridiculous to people, like, “What? That’s crazy!” But when you absolutely want to do a trick or get a trick for these videos you’ll do anything within your means to get it. 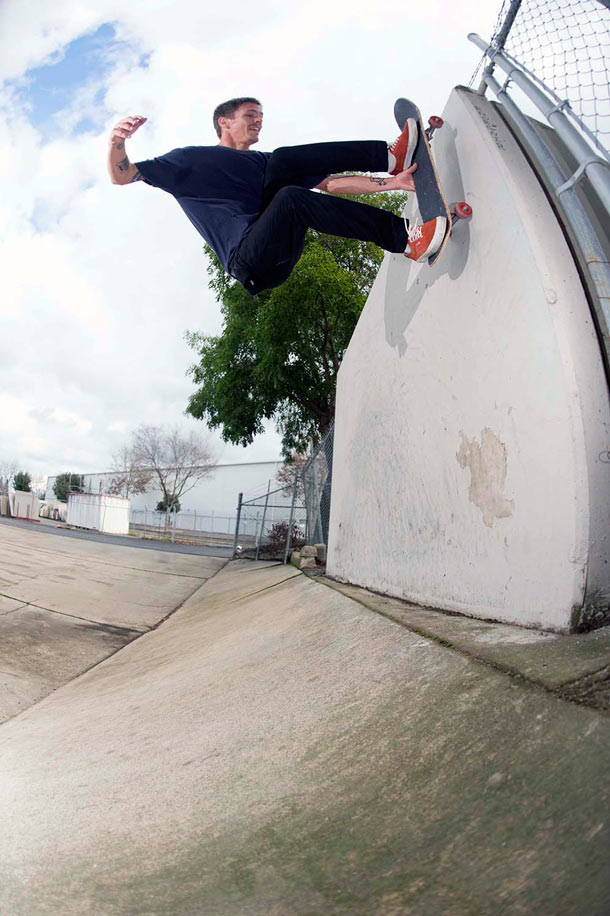 Off the wall in Sac. Photo: Brook

You and the Flip team really brought the ditch back to the forefront of acceptable skate terrain by skating them in new, modern ways. What draws you to this massive concrete terrain?
Initially, I liked the looks of that stuff. That Thrasher cover of the 360 into the ditch shot by Dan Sturt—I initially saw a picture of that spot in an old skate mag years earlier, in the early ‘90s. And then later someone sent me a photo of it and I remembered and was thinking, “Look at that spot! Look how insane!” A 30-foot-high bank or something like that, you don’t find those things in skateparks. You don’t find massive banks or things like the Staple’s Center ledge. It was interesting and a lot of times you didn’t get kicked out of the ditches either. We had a lot of problems down South, getting kicked out of everywhere because everyone was hitting the handrails out in front buildings a lot. I was sick of getting kicked out and not being able to sit down at a spot. When we went to ditches, you could bring a boom box and a couple of bottles of water and kind of hang out a little bit better. It felt like those old backyard-pool sessions but it was a little bit more street oriented. You’re out there with your friends and nobody’s messing with you. You can still get your kicks. You get more time on the board. More time skating versus driving around in the cities getting kicked out everywhere. Obviously my love for the outdoors was a big draw, too. I’d get out, get my skate fix on and then I could go camp. It made it more natural. It made it not feel like work. 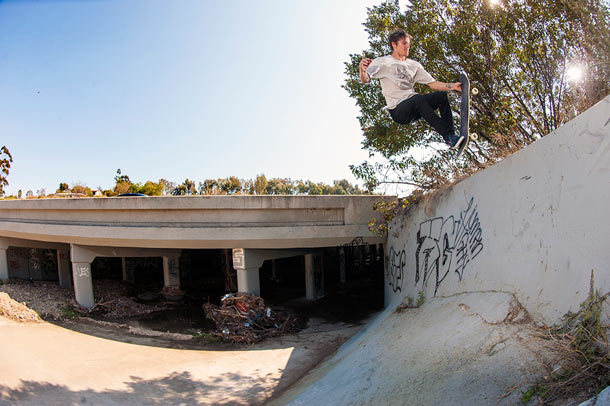 For this video did you find yourself wanting to jump in the van with the crew or were you focused on what you wanted to skate?
I was more focused on what I wanted to skate. I’ve never been a guy who can just be in the back of the van and whatever. Some days you just feel like skating curbs but when you’re on a filming tour it’s definitely more focused on hammers. I just never really worked well like that. I work better with a smaller crew. You can take in the environment more easily when there’s less clutter. I like it when there’s fewer distractions when I’m going skating rather than waiting 45 minutes for everyone to get down to the lobby of a hotel or something. It’s fine doing that and I spent years ever since I was a kid riding in vans. I like doing demo tours and being out with the team, but when it comes to day-to-day filming I’d rather just approach it more casually. And then when it gets to the end I’ll do whatever it takes. I’ll jump in the van with anyone if it means we get to go to a spot that I want to skate. 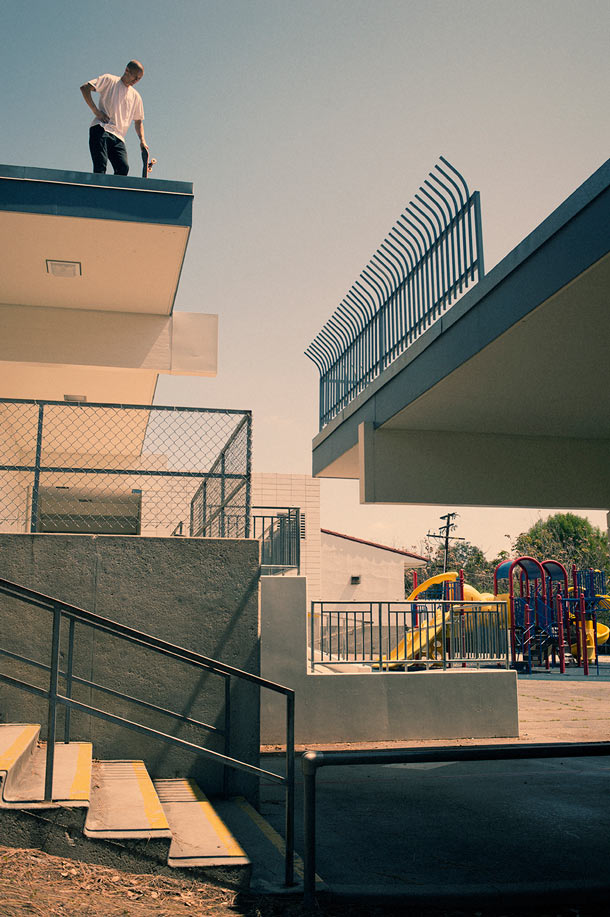 Gearing up for getting broke. Photo: Burnett

A lot of people might have forgotten this, but when you got on Vans and brought back the classic waffle—that was in the D3 era. Everything was super tech and you were a top pro skating in these classic, thin, vulcanized shoes. What made you want to do that?
I’m pretty specific about my product and I don’t like to change it. I’ve tried to ride other wheels and other trucks but generally when I like something I don’t want to change. Once I started wearing Vans vulcanized construction, regardless of if it was cool or not at the time, I skated better. It made me want to skate. I looked down at my feet and it reminded me of Minor Threat and Ian MacKaye and that got me really, really stoked. Regardless of what direction a company’s gonna go, if it means something and you’re a part of it, I grabbed hold of it. I pretty much exclusively rode canvas Eras. And for me, it’s the ultimate skate shoe. There’s padding around the ankle that the Authentic doesn’t have. And that’s why it was added—to protect skateboarders’ ankles. So it was one of the earliest functions on a shoe that was specifically made for skateboarding. So that’s what got me stoked on the shoe and that’s it, really. We definitely had to fight for it, internally, but once that battle was won their vulcanized construction has been copied by every major footwear brand now. But Vans is the first one to resurrect it and really bring value back to the benefits of it. There’s benefits to a shoe that’s specifically for skateboarding. It’s flexible, wears well and is affordable for skaters. I can back that, you know? That’s what made me want to do it. That and it was pretty fun to be wearing pretty much no shoes and trying the biggest spots. And that was when you and I were really shooting a lot. And you were into all that kind of music and all that kind of stuff, too. I was 22, 23. My shoe came out when I was 23 and that’s the age you’re at where you think your manual’s right. So I wanted to look good. And with the Vans Eras I could go out at night with a button-down shirt on. I could be with a girl and feel like I looked decent. Then I could take that shirt off, put on a t-shirt and go skate. So I liked that. I liked that fact that they were not a big fluffy, puffed-up skate shoe that really had no connection to skateboarding and was just a gimmick. Most of that stuff was a gimmick, but we all bought into it and we all tried it. It’s just that was the wrong direction for skate footwear. 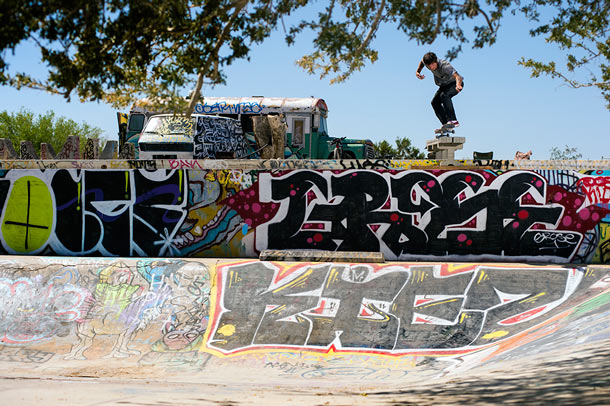 How’d this video turn out for you?
I’m stoked. I had a lot of fun skating. Did the best I can do. Skated my ass off. I’m stoked on how it’s looking. I’ve seen the majority of the video and I’m pretty excited about it. I’m excited for people to see all the other dudes in the video. There’s gonna be some rad skating in there. I think we need a video like this right now. It’s just about skateboarding. There’s no big, gimmicky concept around it. It’s about people. It’s about the people at Vans. I think that’s gonna be refreshing for a skate video. From what I’ve seen I love it, man. It’s got a really, really amazing soundtrack. You can’t go wrong with that! Anytime you’ve got Motörhead and Circle Jerks, it can’t get more skate than that!