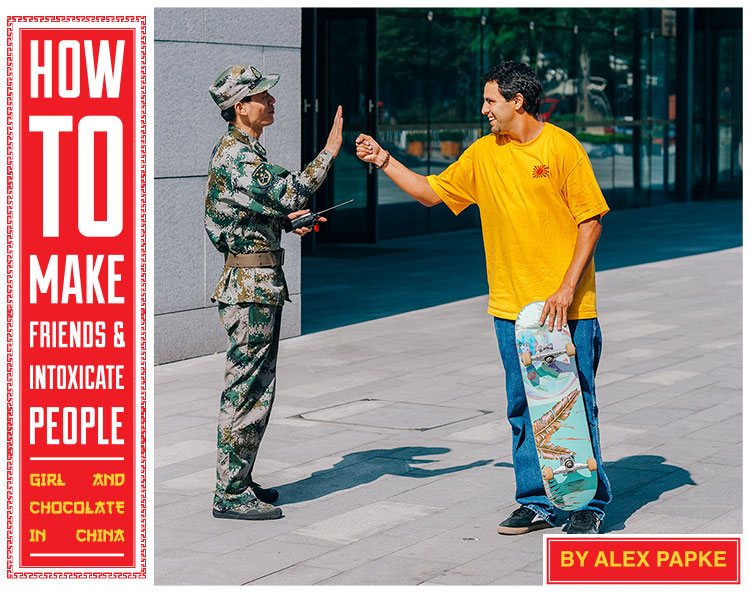 We were sitting with our host, Yang, and twelve Chinese businessmen who spoke no English when Vincent Alvarez projectile vomited all over the dinner table. Apparently, according to Yang, a traditional business meal in China starts with three shots of beer, followed by a shot of secret liquor that tastes like black licorice and rubbing alcohol. This pattern is to be repeated every few minutes while dining, and if you start slowing down you’re not going to hear the end of it. A few drinks in and Vincent was feeling pretty confident. He agreed to match one of Yang’s associates in a bonus shot of the deadly liquor—proving to be one too many. Seconds after putting his glass back on the table he spewed puke everywhere, causing the entire table to bolt for the exit door. We were sure we’d blown the dinner, but all of the guys came out arm in arm, high fiving and laughing their asses off, not to mention carrying a 30-pack of beer and two bottles of booze for us to take back to our hotel. As Yang handed me one more cold one for the road, he said, “I can definitely get behind these kinds of dinners!” 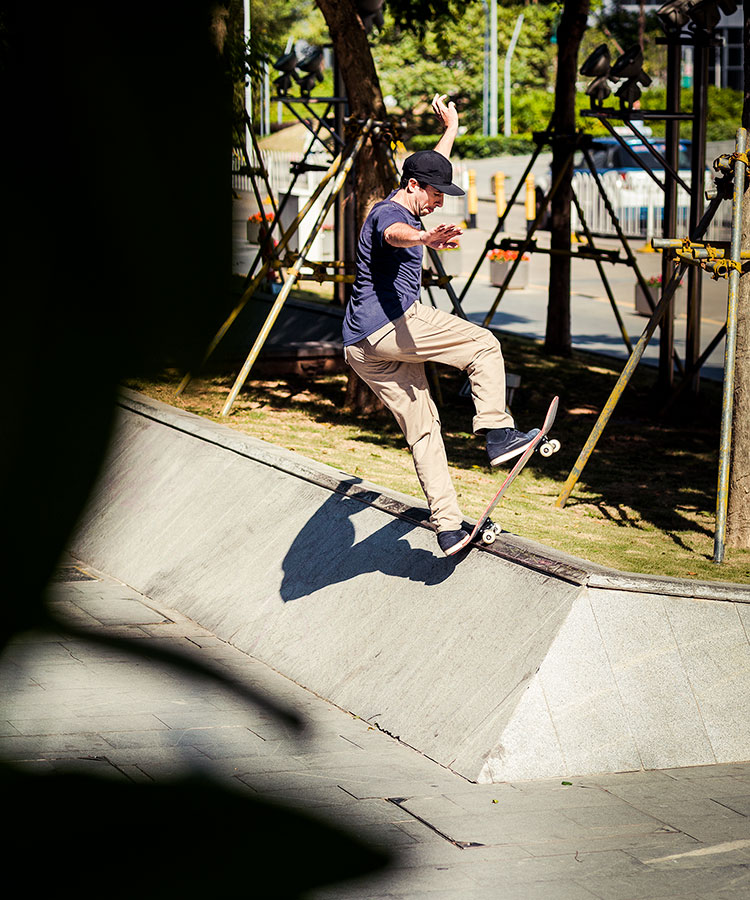 Carroll snuck in a salad 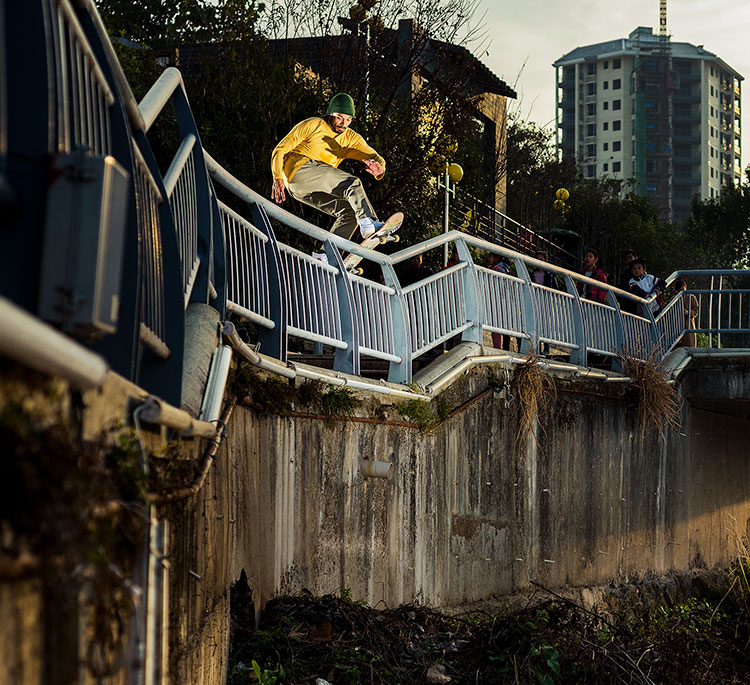 Kenny blew some kids’ minds when he started speaking English instead of Chinese. They were almost as impressed with this front board pop out 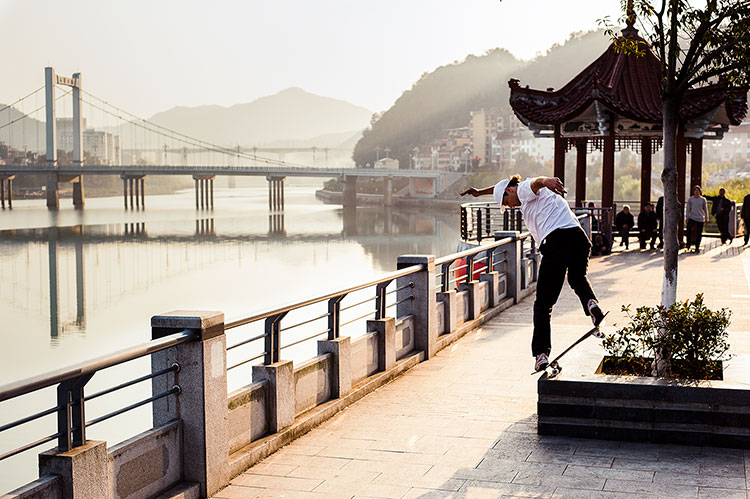 Our host Yang was so juiced on our first night out with him that he recreated the recipe the following evening. After a couple rounds of Find A Friend, a popular drinking game, I thought I might be the one puking on the table this go around, so I made my way to the bathroom to expel all of the liquor and hot pot that was in my belly. As I returned to the group, sickly, sweaty and pale, Kenny exclaimed, “Damn! You barfed, too!” Everybody laughed and then I realized that while I was gone Flaco had done some damage of his own to the table and floor (which didn’t stop him from keeping the shots going). Shortly thereafter, Rick excused himself and threw up off a three-story balcony, which brought the group puke counter up to four. Not too shabby, guys. 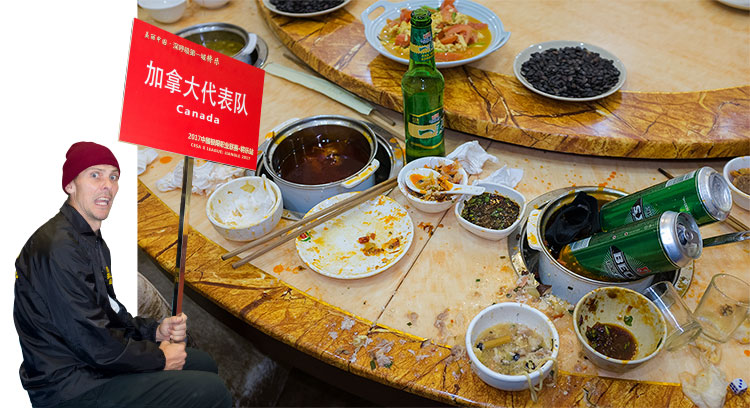 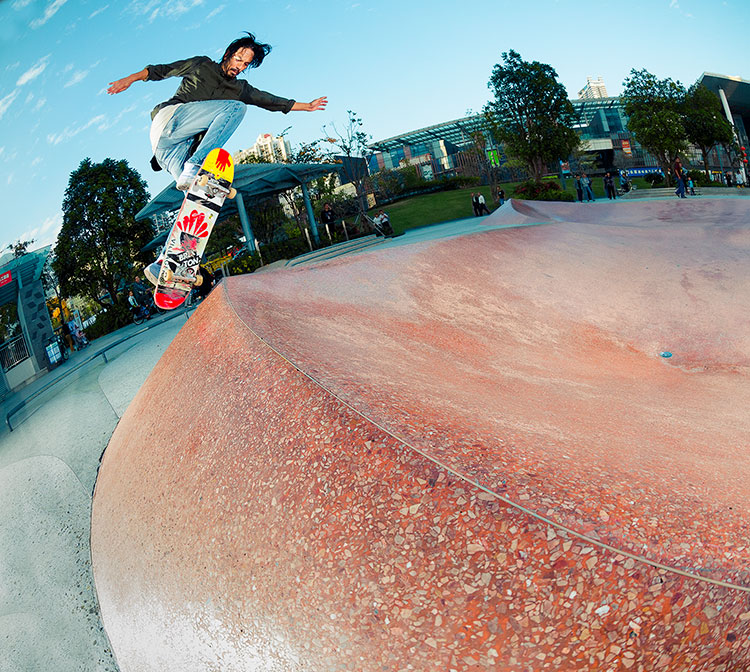 Kenny avoided Yang’s liquor, thus prevailing the next day with a back tail pop over to fakie. Pick your poison, kids

He got sick at dinner but sicker in the streets! Vincent, switch wallie frontside shove it 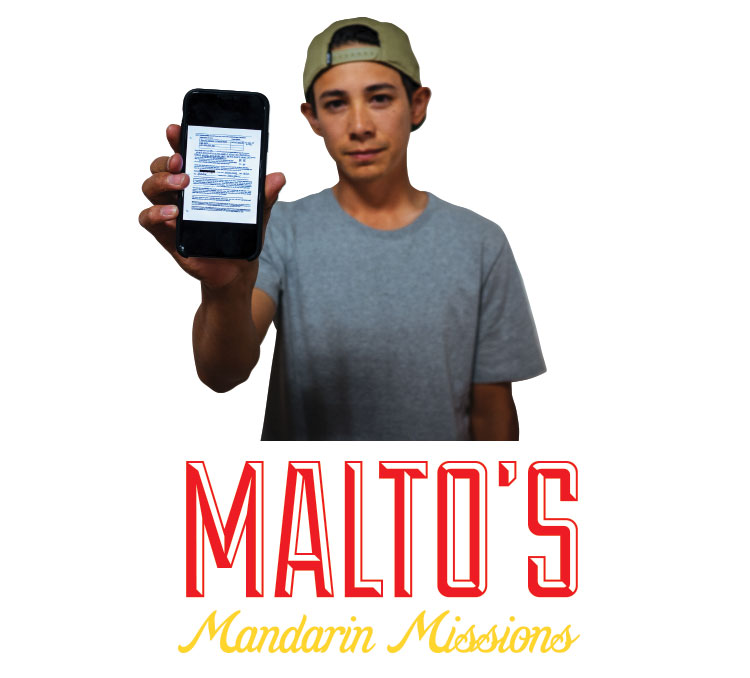 What keeps you coming back?
Strictly the skate spots. China, for me, is so amazing to skate but it gets old seeing these newer, modern cities where they have the most perfect banks and marble ledges. When you dive into it and go to less explored areas you find cities that have crazy history to them and skate spots that look really cool. That’s what makes China special.

Every night you and Rick were always pushing to hit the spa. What can you expect to find at a Chinese spa?
Rick, Kenny and I were the designated spa crew. You can definitely find a lot of confusion at some of these places but that’s just the language barrier. The spas in China are hands down the best in the world and have everything: hot tubs, cold tubs, saunas, steam rooms, La-Z-Boy rooms. You can get your nails done. Hell, you can even get a haircut at some of them. Kenny was saying he’s even stayed the night at one before. To us, it was a reset button so when we stepped on our boards the next day it would feel like the first day of the trip again.

You claimed that the rail you grinded on this trip was the biggest you’ve ever hit. I’m sure it wasn’t easy, especially with cops and security there. What was going through your mind and how did you think the fake permit would play out?
We went there two days in a row. The first day it was around 5pm on a Saturday and the spot is at a shopping mall, so I’m rolling up while everyone else is trying to control people walking up and down the stairs. I was still into it, but on top of that there was security and one security guard at the top kept flinching at me and I didn’t want him to shoulder check me as I popped, sending me down all of those stairs. When we went back the next day it was obvious that it was going to be a bust but I wanted to go through my process and not get rushed. I just wanted to feel it out and by that time security was on us, but with the language barrier it’s kind of nice getting kicked out. It’s the only situation where it’s more on your side than theirs. I knew if I could finagle my way through it that it would work out, so when the security guard wouldn’t let us skate I had one of our tour guides translate that we had a permit. I could tell that they weren’t having it, but when we brought the photo up to the guy he kinda just went with it. He probably knew it was fake but gave us ten minutes anyway. We were leaving Shenzhen that next day, so I really just wanted it to work. Thanks, language barrier!

I think you were one of the few people not to puke while on this trip. Were you not feeling Yang’s liquor?
That fire liquor is insane! I don’t know what category of alcohol you would put it in, but it was kind of like moonshine with hot sauce in it. It wasn’t sitting right with me and I couldn’t take the kind of shots that those guys were putting back, so I took sidelines with Kenny and stuck to beer. It obviously wasn’t sitting right with you guys either! Vincent and Stevie both projectile vomited all over the table, Rick is outside puking off of a three-story balcony and you’re in the bathroom throwing up. I don’t know how the Chinese stomach it. Me and Kenny were just looking at each other, both pretty stoked that we weren’t in the same boat as everyone else. Fun times watching it all go down, though!

For an outsider, many of the foods and traditions seem extremely foreign and hard to get behind. Is there anything someone going to China for the first time should stay away from or must try?
Stay away from the water and ice; that’s for sure. Its hard for me because I’m pretty adventurous when it comes to food, but China is one of those countries where you really gotta be ready to dive into some shit. It is so far opposite from America when it comes to food so when any outsider comes in you just gotta roll the dice and pray for the best. I drank tap water in China once the time before this and it seriously kills you. I was throwing up the whole plane ride home. 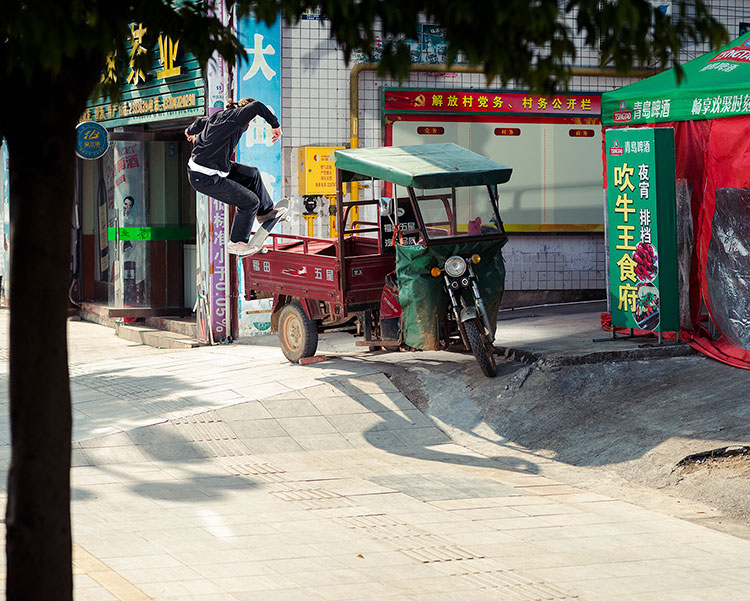 Yang convinced the owner of this cart to pull it up to the bump and let us skate it. Brophy front boarded it to say thanks 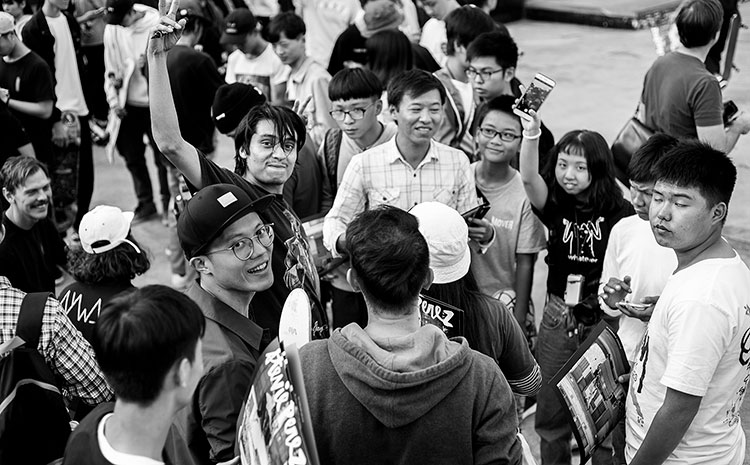 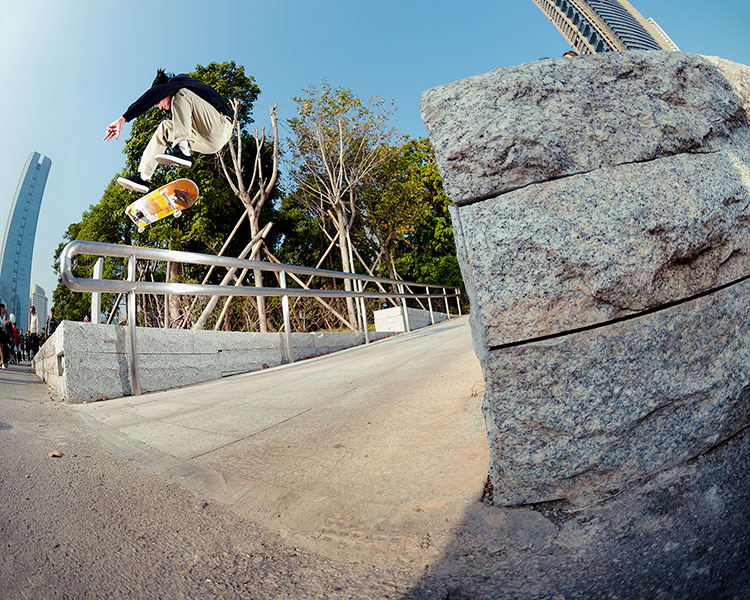 The good thing about barfing is it makes you lighter. Flaco, fighting-weight heelflip

We thought our tour guide in Shenzhen was taking us to a mellow 12-stair rail, but instead we ended up at a perfect 24. While Malto was sizing up the beast, security came out guns blazing, letting us know that it wasn’t a go. We circled the block and came back, only for a crowd of onlookers to surround the spot which attracted the attention of the local police. The scene was way too hectic so we decided to come back the next morning in hopes of a bust-free session. Unfortunately, security was once again posted up so barging was the only option. Out of nowhere, Malto yelled, “Yo, Rick, show them the permit!” Rick, being the only one with cell service, Googled “film permits,” found a believable one, saved it to his phone and took it up to show the guards. I’m pretty sure it was for a film van or something, but seeing as how these guys neither spoke nor read English, the only thing that translated was a silver stamped seal on the bottom corner of the image. They looked at each other, shrugged and motioned for us to keep trying. Minutes later, Sean rolled away from his biggest stair count to date. Thanks, Google. 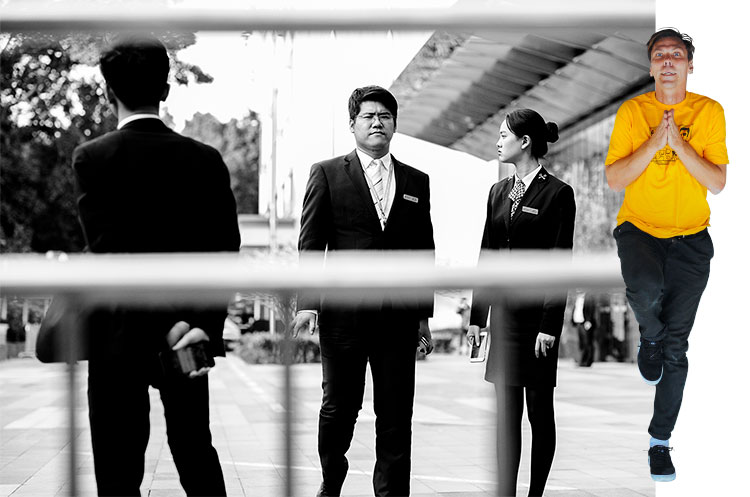 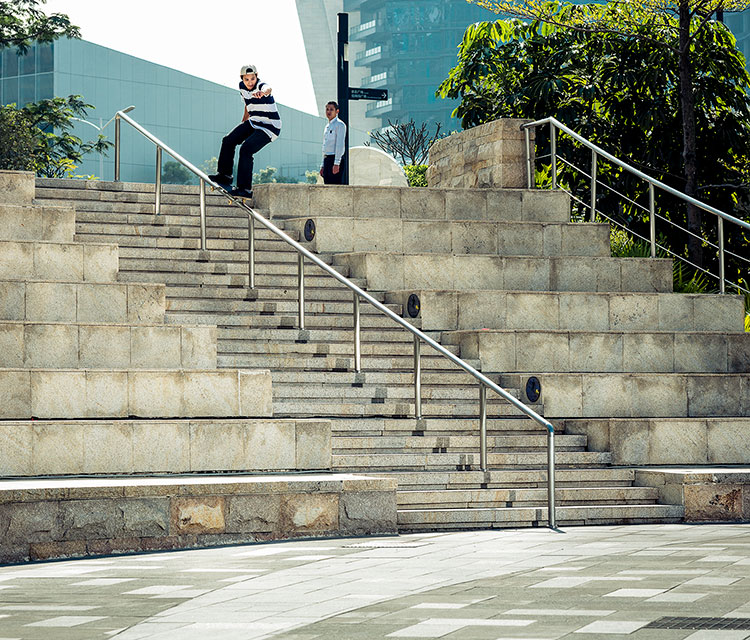 A fake permit was all Malto needed to reel in this massive 50-50. Well, that and a few world-class spas. Thanks for the good times, Mr. Yang!

As we sat down for our final (and our biggest) round-table dinner, Yang whipped out the shot glasses once again and demanded a toast. He was not only impressed by seeing what we were capable of handling on his home turf, but was equally stoked we were willing to try to match his pace of drinking. “I swear, my record is 96 beer shots in one sitting,” he kept repeating, “but when I come to the States, we are going to Hollywood and I will make it 100!” I, for one, am down to see that feat attempted. See you in LA, Yang. I’ll bring the bucket!