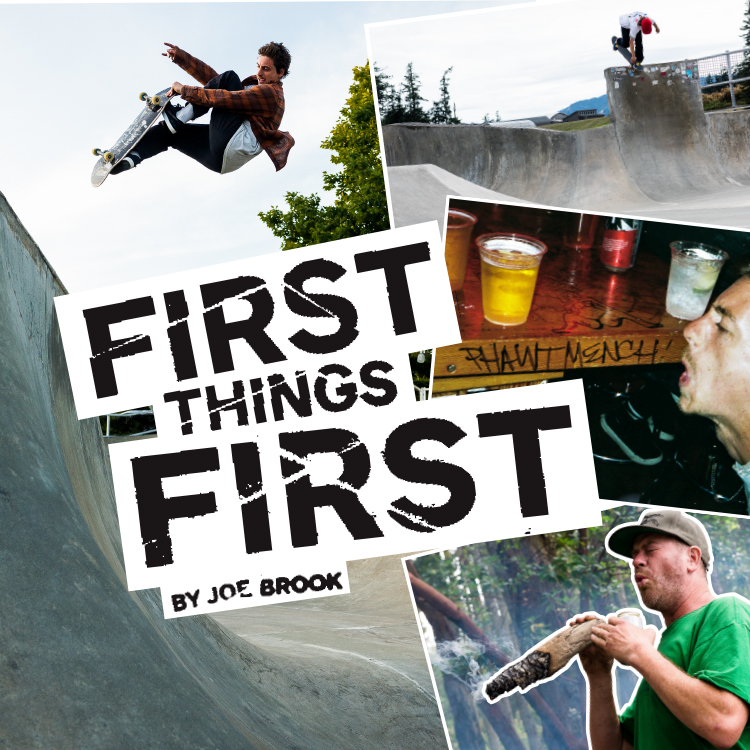 I’ve been going on skate trips since the late ‘90s yet somehow I’d never been on one with the Girl team. Weird, right? This trip was originally pitched as a Cory and friends Northwest adventure, but Sam Smyth caught wind and wanted to get in on the action. So it turned into two trips rolled into one. Not only was this my first outing with the Girl squad, but it was also the maiden voyage for their rookie sensation, Simon Bannerot. Soon we were all embracing this theme of firsts, with everybody eager to check off some life NBDs (for better or worse). 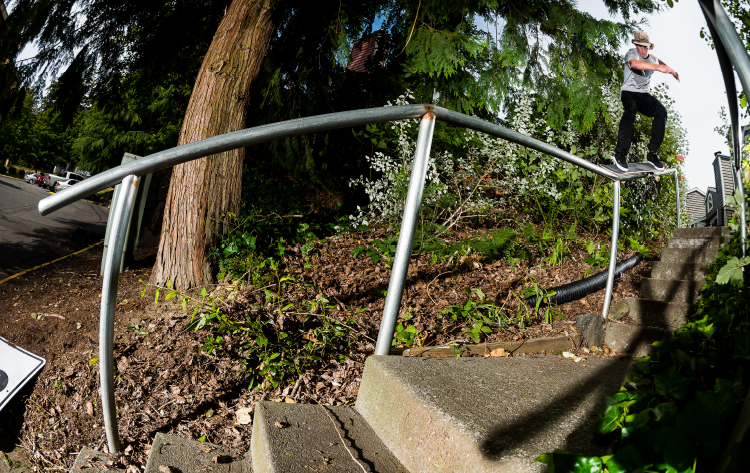 Out of the van and straight to work! Simon Bannerot, double-kink feeble.         Photo: BROOK

Ever heard of CBD weed? Cannabis strains that are high-CBD only contain trace amounts of THC, so there’s no psychoactive effects associated with them. Or to put it in layman’s terms, the shit won’t get you high. Mike Carroll went on a total CBD binge on this trip, buying over 100 dollars worth of edibles and THC-less weed. Biebel, who had never heard of such a thing, was tripping! Nevertheless, he hit his first CBD joint with Carroll. Mike explained that it was more about the physical effects than a mental high. Biebel’s response: “Just stop hitting the joint if you don’t want to get high.” 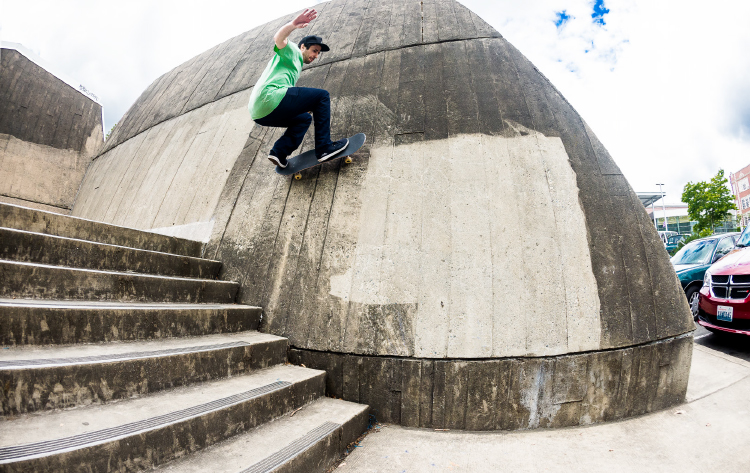 Carroll’s weed won’t get him high but his wall rides will.     Photo: BROOK 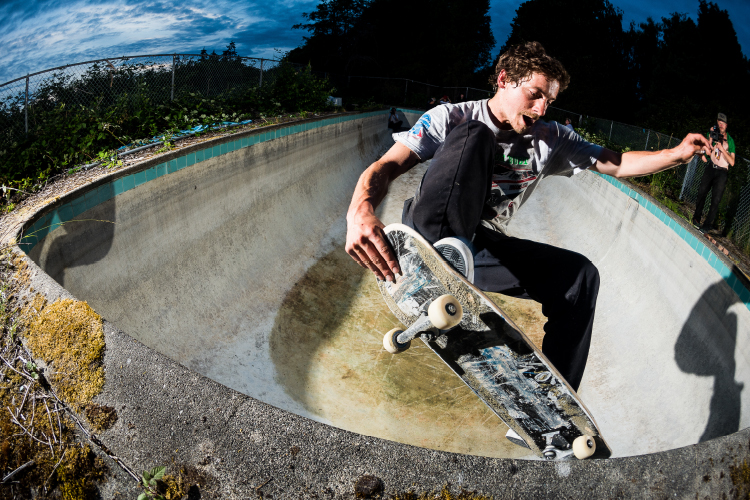 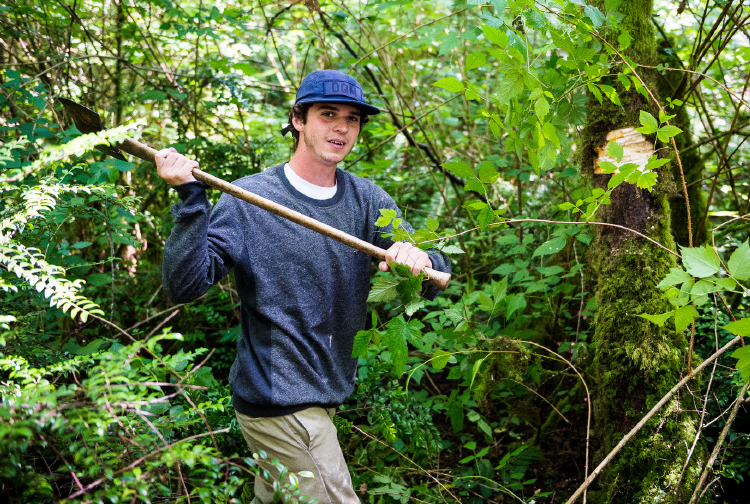 One of Tyler Pacheco’s goals on this mission was to chop down his first tree, and he got the opportunity to do so in the woods behind Cory’s house. He set out, axe in hand, to hack away at a trunk. I watched him go at it for a while, surprised by how difficult it was. I got bored after a while and went back to the house. Shortly after, the tree came crashing down. It sounded like thunder followed by cheers. We ran out and Cory’s girlfriend was pissed! Tyler didn’t check with anybody before choosing his tree and he chopped down a living one instead of a dead one. Hey, you don’t get a nickname like Manchild for making the best decisions.

Killing trees and slaughtering the streets, Manchild is out for destruction! Kickflip 50-50.         Sequence: BROOK 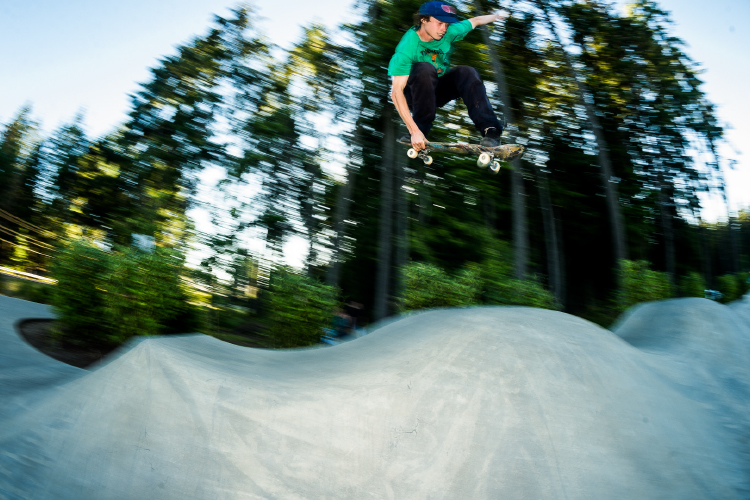 Five days in and it was time for the Girl team to pack their bags and head home. P-Stone and the Nike crew then came in hot and revved up. European rippers Oski Rosenberg-Hallberg and Jacopo Carozzi had never camped in the Pacific Northwest and they were psyched to see the sights. Before we headed out, P-Stone fired up Cory’s lawnmower and went to work. Patlanta joined in and pretty soon the entire place had been mowed, watered and weeded. Pretty sure this is the first skate trip that’s started with somebody’s yard getting landscaped. Hopefully it helped ease the pain of Tyler’s tree folly. 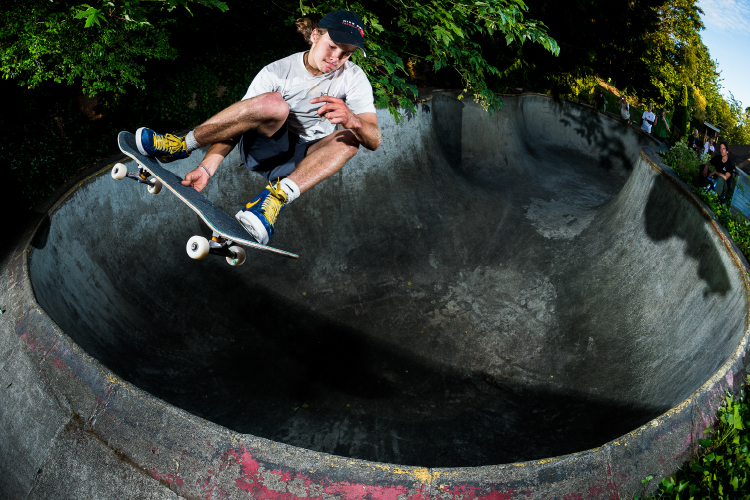 No skating on the sidewalk? No problem! Simon, front feeble to the street.     Sequence: BROOK

With the crew in tow, as well as Cory’s dogs Willie and Solstice, it was time to head towards Orcas Island. Solstice is just a pup and this was his first skate trip. We had no trouble finding local girls who were willing to watch him while we skated. Willie is an Australian herding dog and he went absolutely nuts in the woods. On two occasions, he herded deer straight towards us.One morning, P-Stone got up early and was packing up his tent. I heard him yelling, “No, Willie, no!” I looked out and saw a huge buck charging through the campsite right where P-Stone’s tent had been. If he’d been in it he would’ve gotten destroyed. Hell of a way to go out, I suppose. 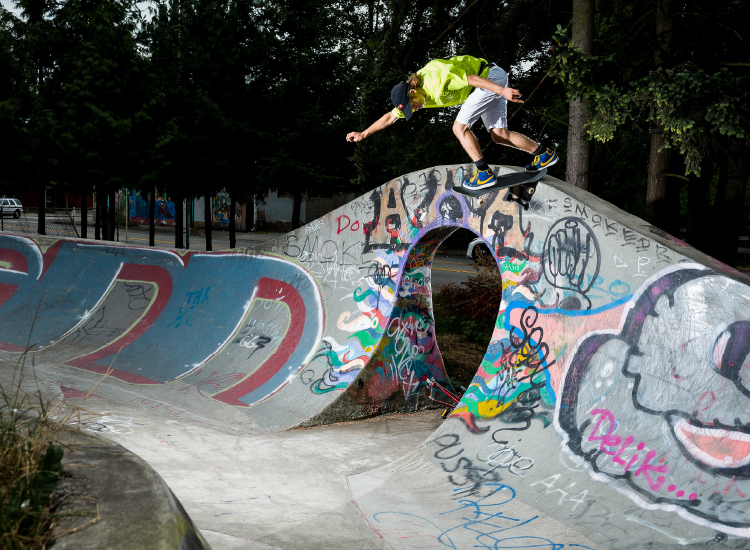 We camped on the beach in Port Orchard one night. P-Stone and Jacopo went crabbing and came back with a bunch of baby crustaceans. Preston went to work and cooked them up in one of his infamous stews. He offered me some but I declined. As we were leaving the next morning, I saw a woman in a lab coat testing the water. She told me that the fecal count was at an all time high and that we shouldn’t go near the shore. Add that to the list of firsts: some of the dudes ate their first bowl of fecal-infused crabs. 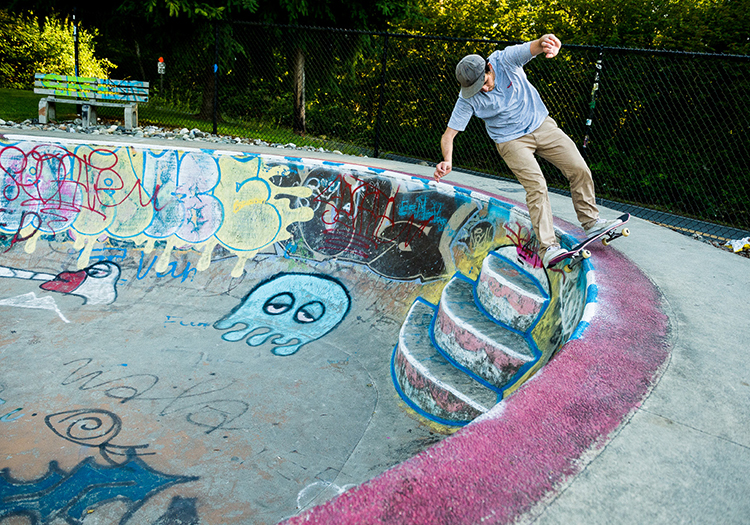 Why so blue, little ghost? McCrank is hurricaning over the damn stairs—cheer the fuck up!         Photo: BROOK 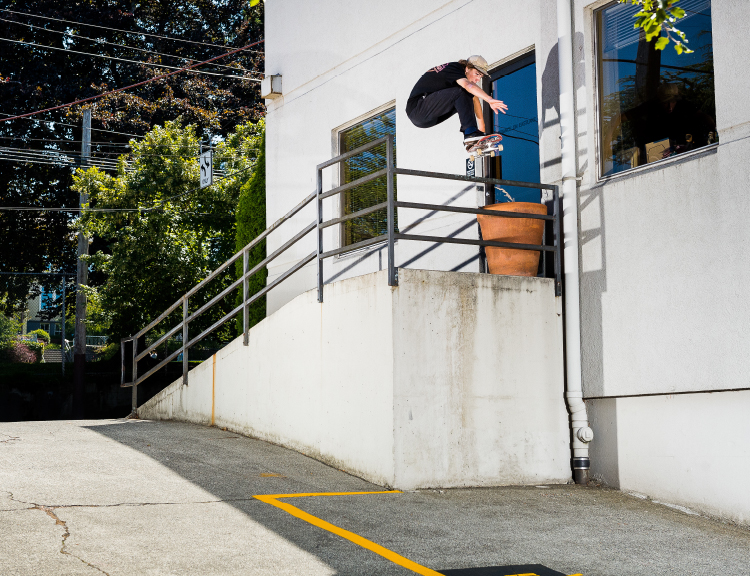 July 4th was my last day on the trip. Grant Taylor arrived and we all went to Cory’s parents house to grill, chill and shoot off some fireworks. While sitting by the lake watching the technicolor explosions, I reflected on all of the firsts we had experienced: CBD binges, a tree getting killed, spontaneous landscaping, Europeans sleeping in the dirt, almost getting trampled by deer—so many NBDs in such a short amount of time. Although I’m glad eating shit-filled crabs is an ABD now. So gross, dude.