"Girl on Smoko in Melbourne" Article 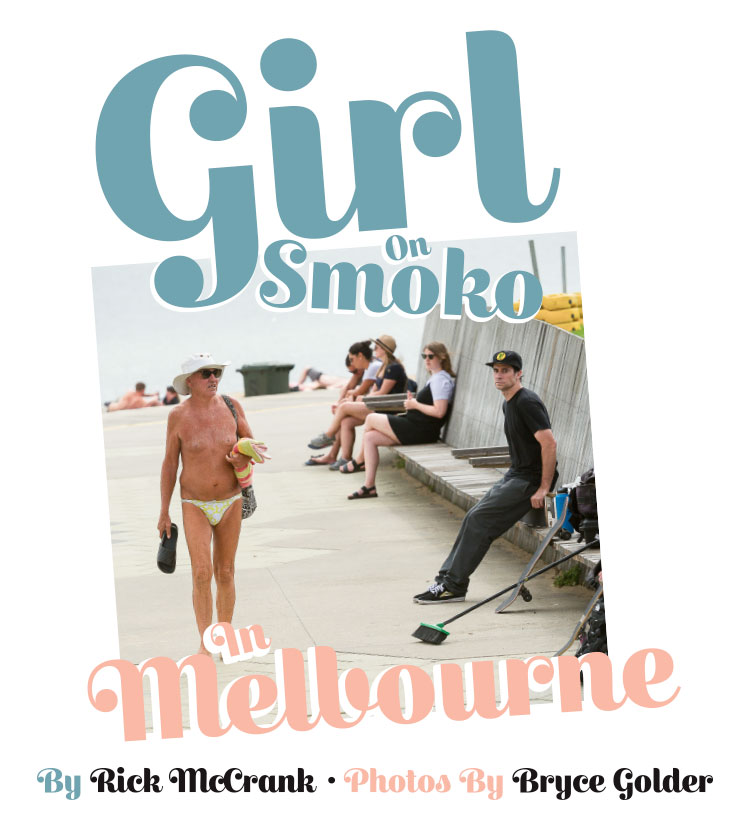 I was camping on a beach in Australia when I got the call—ten days of skating in Melbourne with the Girl squad. My first thought was that I hadn’t worn shoes in a month, and to be honest, I didn’t want to. I wasn’t keen on leaving my surf holiday at a pristine beach with kangaroos and epic waves for a sweaty, grimy skate mission in the city. But once I got to Melbourne and met up with my Girl family, all of that melted away like coffee through a Tim Tam. After a warm-up day skating in Birkenstocks at the Melbourne museum, it was time for me to put on some shoes and socks and hit the streets! 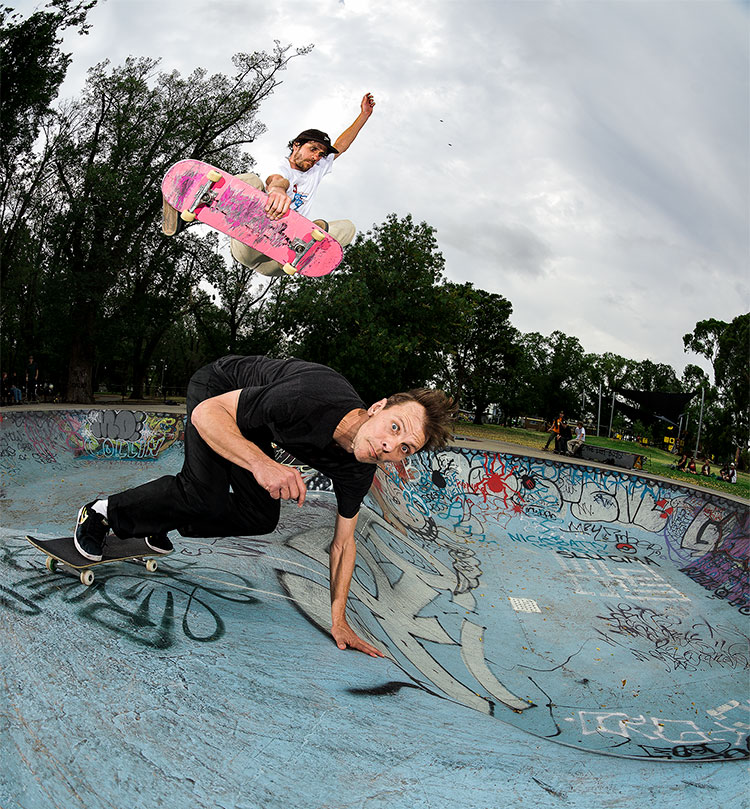 The Ricks at Fitzy. Gotta love those lumps 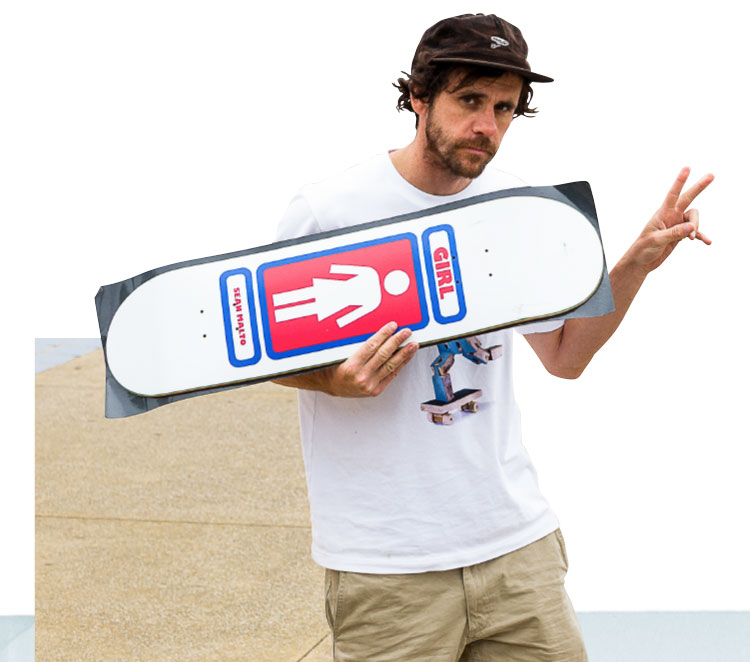 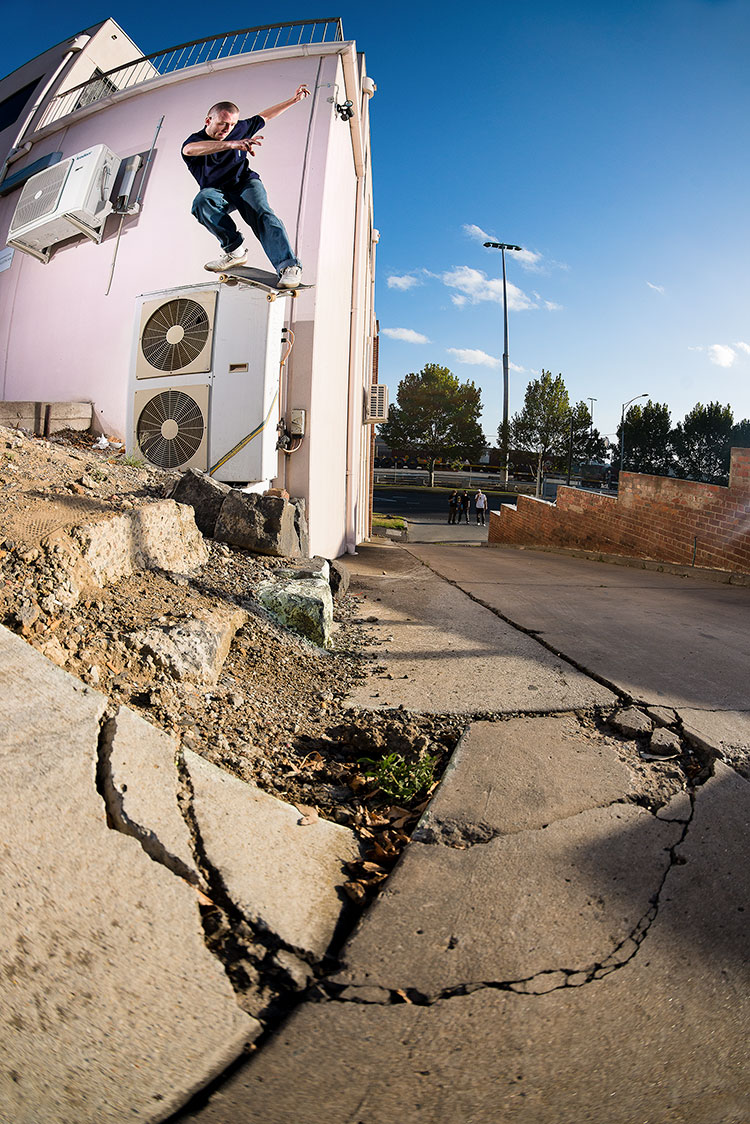 Griffin, air-conditioned gap to tall back Smith. Check that landing 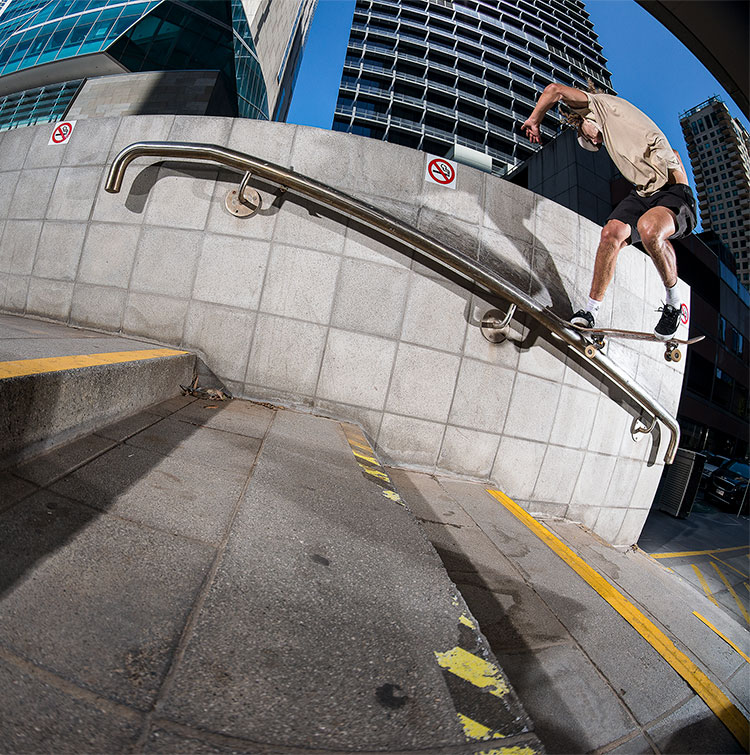 No kangaroos but the spots were epic. Simon street surfed a backside 180 nosegrind to forwards. Gnarly, bro!

Once we started to skate I instantly fell in love with it again. It’s hard not to when you’re in an amazing city and surrounded by the booming kinetic energy and talent of Manchild, Griffin, Niels and Simon. Top that off with the power and grace of Brophy and the ever-youthful energy of Rickk and Mike and it’s a perfect storm of skate stoke! I found the younger dudes’ vibes to be really infectious. They hyped me up to skate and pushed me to go harder. I sometimes feel bad for the filmers and photographers that have to keep up with these kids impulsive energy, but Neihana Tonkin and Bryce Golder were right there with them and caught some epic impromptu action. The theme song for our trip was “Smoko” by The Chats. Their drummer Matt Boggis skates and is on Girl flow. The song is about being on a smoke break and not wanting to do any work: “I’m on smoko so leave me alone.” I could relate, although I don’t smoke and actually hate cigs more than anything. But technically I had been on smoko at the beach and didn’t want to go to “work” in the city. Turns out it was so chill and fun we were actually on smoko from our North American lives.

Niels, aka The Professor, giving a lecture on front 5-0s to back 180s out 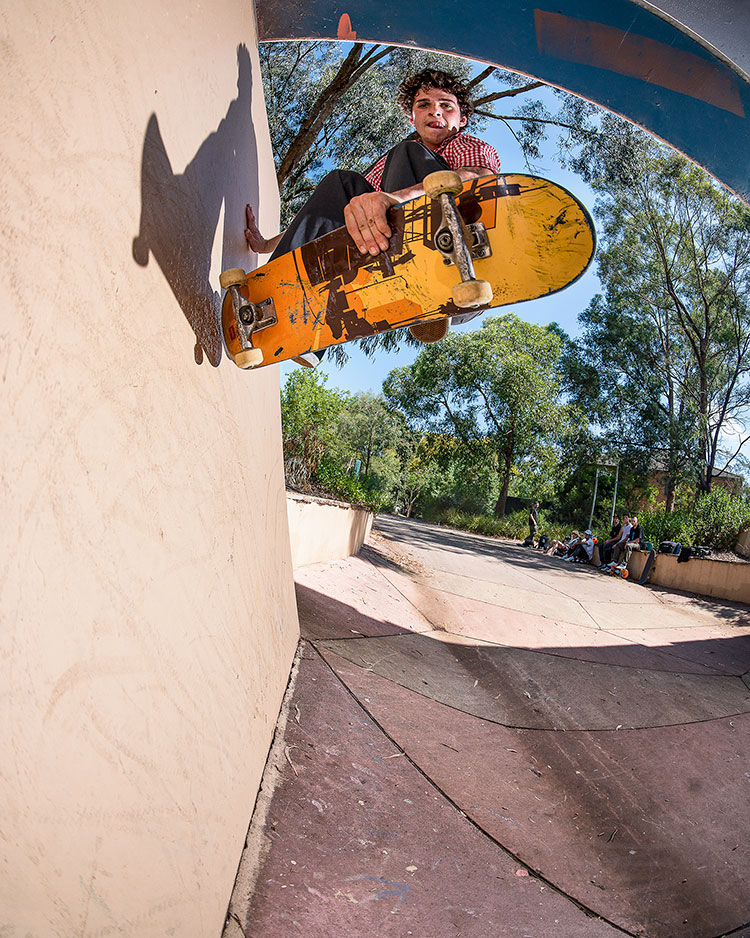 Manch, aka The Wall Slob 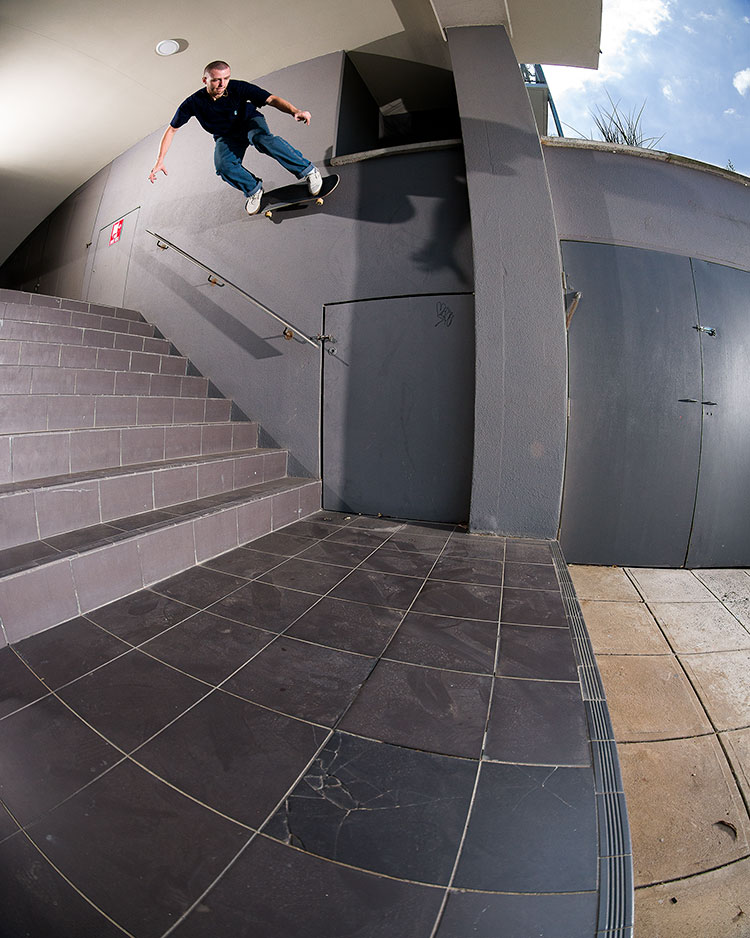 Griffin’s wallride gap out was perfect but definitely not boring

After skating some city spots we hit up Fitzroy bowl, aka Fitzy, one of my favorite little parks. It’s small and lumpy with dented coping and it’s chock full of flavor. The locals skate it amazingly with unique styles all to their own—I love that shit. I heard they built a remake of it somewhere but it wasn’t as fun because it was too smooth and nice. Some parks need the lumps, bumps, scars and dents to make them what they are. I think that’s what gives DIY parks their power—they’re unique places that you have to figure out, learn and connect with. Perfect = boring. 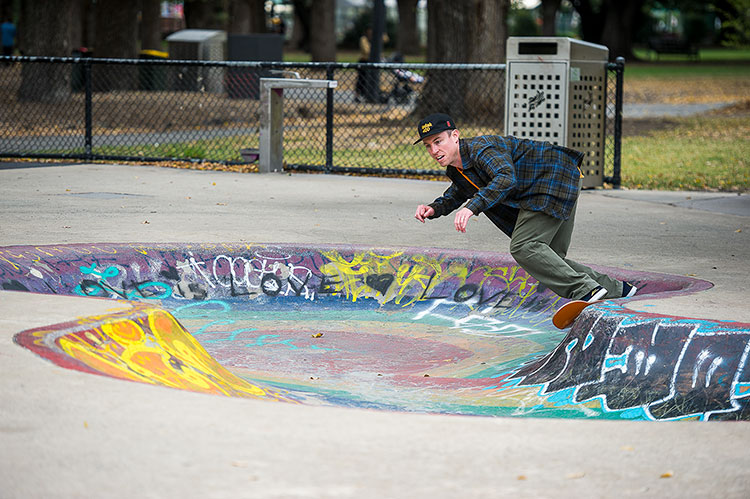 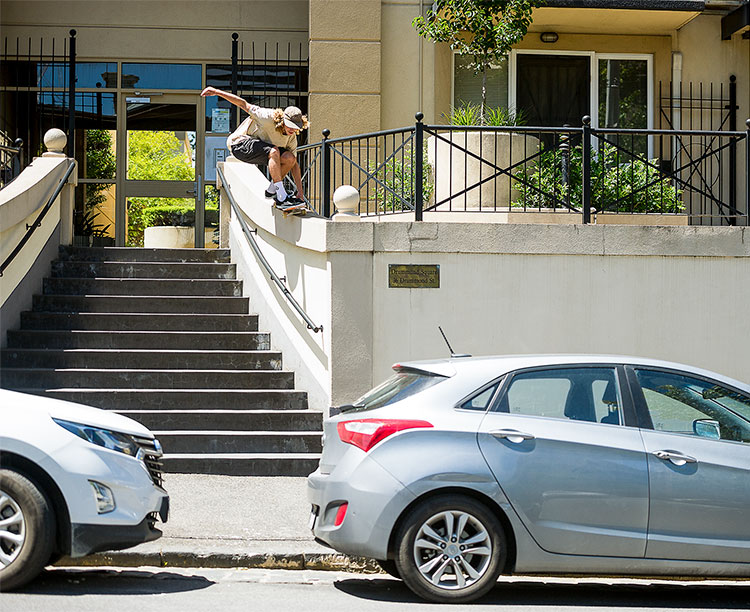 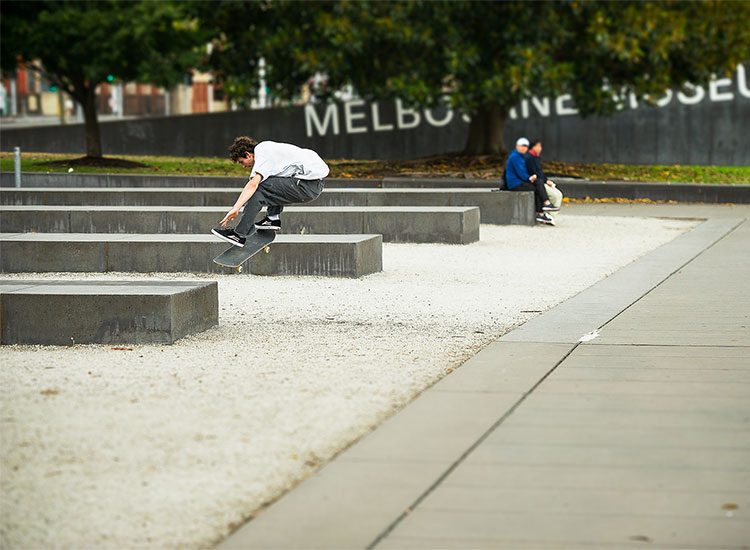 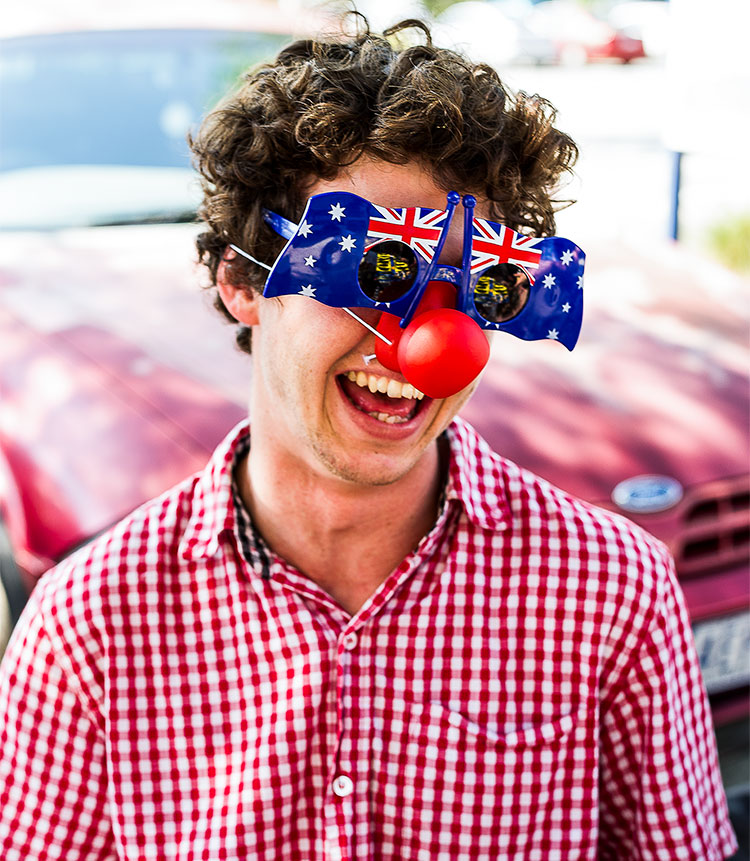 Griffin, front three with a pocket full of diamonds

One Sunday we left the cars parked at the Airbnb and skated through downtown. After hitting a few zones we found ourselves at the very crowded library bank, when a strung-out and clearly mentally-ill dude with a mohawk pushed his way through our group, aggressively calling us all terrorists. Carroll decided to stare him down, which made the guy even more aggro. He started swinging his tote bags around, hitting things with them. You could clearly see that he had a hammer in one of them. Niels, oblivious to all of this, rolled by him and the guy tried to push him off his board. Instead, he tripped and his bags fell to the ground. Carroll kicked one of them down the sidewalk, spraying the contents of a bag of wine all over some unsuspecting Sunday shoppers. Niels noticed that the guy dropped a large knife when he fell, and quickly stuck it in a trash can. The maniac was gathering up his belongings and screaming that we’d stolen his diamonds, then he started chasing people around with a shiv! His attention shifted to one of the local skaters who decided to stand his ground. He started lunging at him with his blade. After numerous warnings to “Leave him the fuck alone,” the skater, with a firm mall grab, jabbed the dude in the face with the tail of his board. The sound was really intense—it was like wood on concrete, but in this case it was wood on cheekbone. A stream of alcohol-thinned blood ran down the man’s face and that was the moment when everyone decided they’d had enough of the madness. We all skated down the street before the police inevitably arrived. 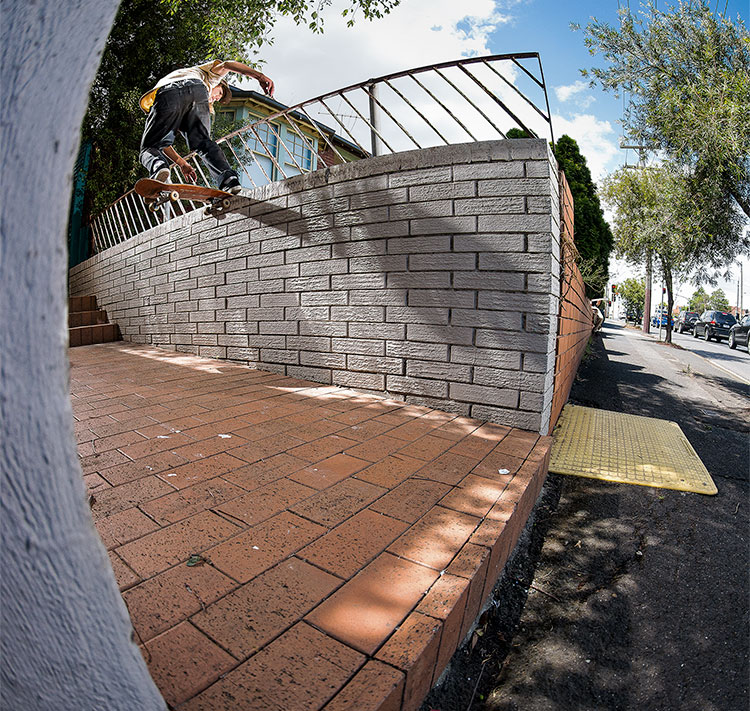 Front nose all the way into traffic, Simon was smoking! 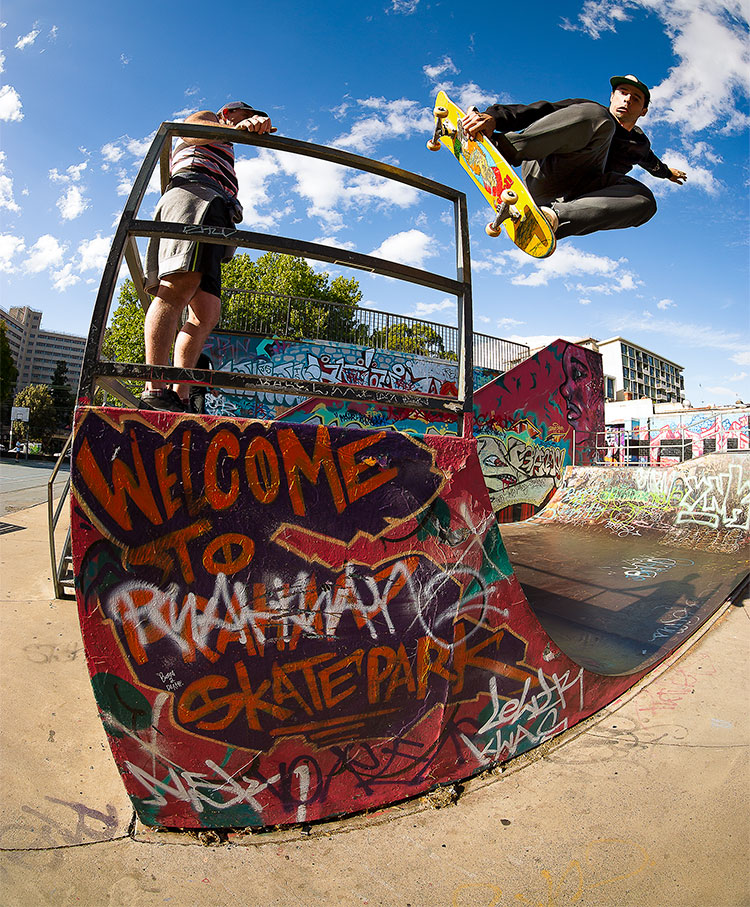 We escaped from the knife-wielding psycho, but Rickk was with us so we were still in danger. He’s got a long track record of goofing off and inadvertently hurting his friends. For instance, he thought it would be a good idea to kick a soccer ball at group of us without any warning. He assumed it would just land near us, but the ball had laser-like accuracy and the coordinates were programmed for Carroll’s face! It was a real-deal Bend It Like Beckham corner kick. The ball arched and spun sideways, slapping Mike across his face. Mike was bummed. It hurt and everyone knew it. The kick was simultaneously the best and worst thing Rickk has ever done—it was an insane move. Mike was furious. In his rage he yelled, “I’ve had to deal with 30 years of this shit!” Rickk eventually apologized and after a day or so Mike let it go. Girl is a tight-knit crew of old and new friends, and the oldest friendship—and the glue that bonds us all together—is between Mike and Rickk. They met when they were just kids. As the story goes, Rickk showed up to Mike’s house to skate his miniramp. Mike came out, shredded the ramp and then went back inside without saying a word. Classic Carroll weirdness. Cut to 30 years later and we’re at the Prahran skatepark. At the end of our session, Rickk started skating the miniramp. No one was really watching and no one was filming. Mike wandered over and joined him on the ramp. It was just the two of them, quietly skating a miniramp together just like they had when they were kids. I couldn’t help but think about the day they met and how amazing it is that they’ve had “30 years of this shit.” 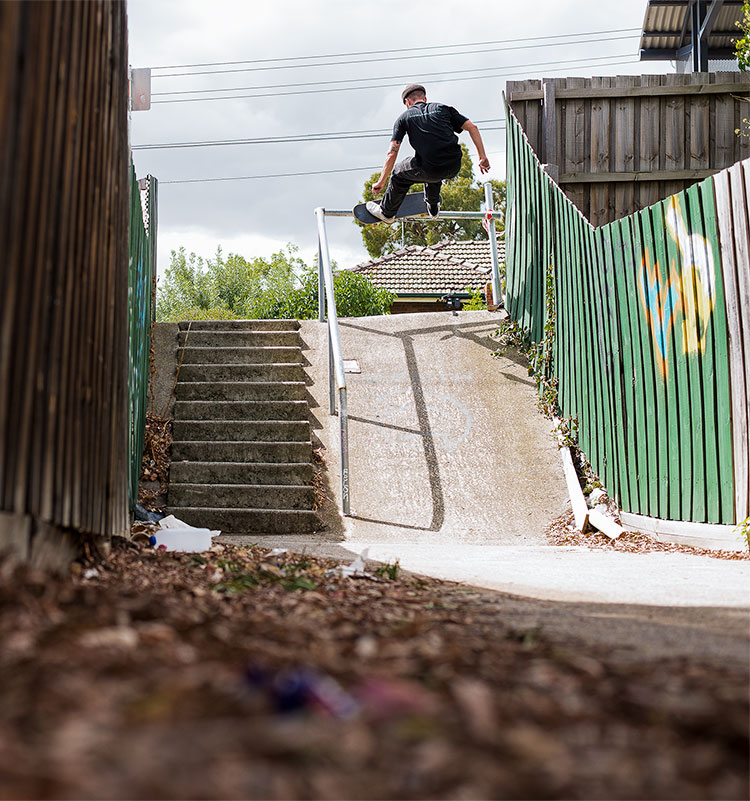 Griffin, bank to bar to the bank to the bar 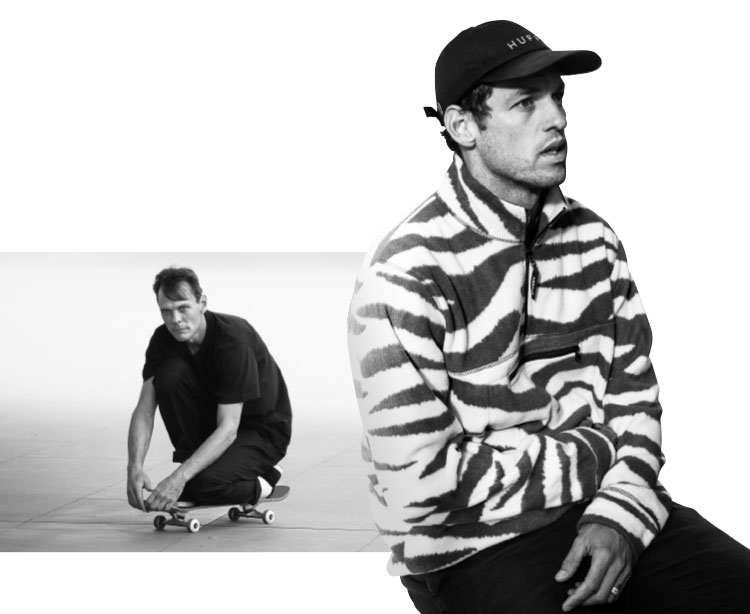 We’ve always loved coming to Australia. I personally think of Melbourne as a second home. Special thanks to Bryce, Neihana and Hardcore distribution for taking care of us while we were there. I can speak for the entire Girl fam when I say we’ll be back as soon as possible. Next time I won’t even complain about having to wear shoes, but until then, I’m on smoko so leave me alone. 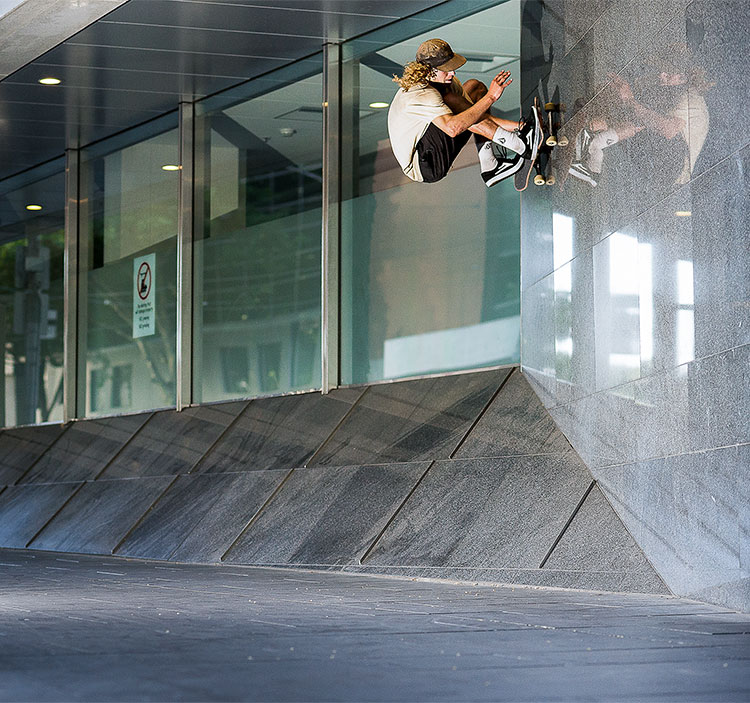 Simon frontside wallrides past the skate stoppers all the way to the beach—over and out Down Under!