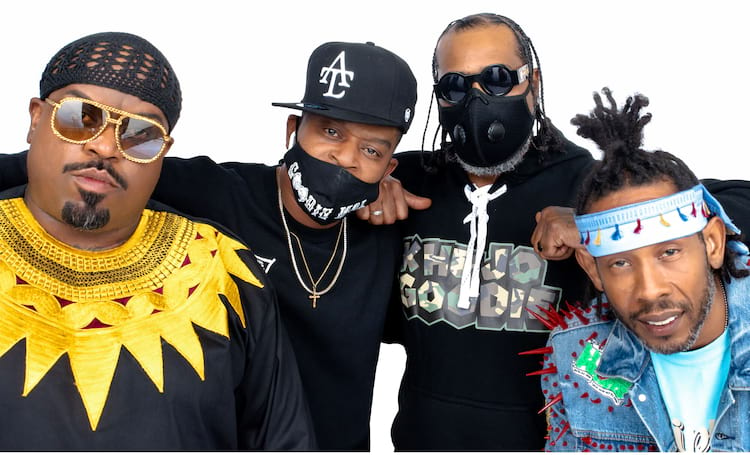 As seen in the March 2021 issue
Goodie Mob often doesn’t get the credit they deserve for being the blueprint for Southern hip-hop. Along with OutKast, the production team Organized Noize and other members of the Dungeon Family collective, CeeLo Green, T-Mo, Big Gipp and Khujo helped usher in a whole new sound full of jazz, funk and their own signature brand of rhyming in the early ’90s. On November 6, the Atlanta natives returned with Survival Kit, the group’s first album since 2013’s Age Against The Machine. Explosives tracks such as “Frontline,” “No Cigar” featuring André 3000, “Prey 4 Da Sheep” with Big Boi, “Are You Ready” featuring Public Enemy’s Chuck D and the title track easily reminded classic hip-hop fans what they’d been missing for the last seven years. During a recent interview with Thrasher—that went down before the album arrived—the legendary foursome opened up about the 16-track project, their debut album Soul Food turning 25 and some of their favorite emcees. —Kyle Eustice

Public Enemy, Nappy Roots and Paris all dropped new albums on September 25, and now we have Goodie Mob coming back. Do you think we’re seeing a return to conscious hip-hop?
Big Gipp: Well, I think we’re getting back to the essence of hip-hop. But at the same time, I feel like the reason why we’re getting back to the essence of hip-hop is because the matrix is down, and the matrix’s been down ever since COVID-19 showed up. Once the business went down and it wasn’t no more concerts and everything, I don’t think the music business has the same control it had over the industry before it shut down. I think it gave a lot of these areas, a lot of artists time to go to the studio and utilize the Internet at this point to really get their message out. Because they know right now there’s not a lot going on in the music business. Right now, we’re in the fourth quarter, so in a normal world this will be when all these people put these records out and it’s big budgets here and there. I think right now people are really confined to their areas. I think instead of being paused, music people are starting to search for what they want now, because what they want is not what the industry has. They have to search for people who make the music for the current times. I feel like that’s why now you have the re-emergence of conscious rap—it’s needed.

Chuck and I always talk about that. Where are the PEs of 2020? To me, we need that more than anything right now. I assume a Goodie Mob album is on the way?
T-Mo: Definitely. An album is coming in November.

Is that inspired by COVID times?
Big Gipp: Yeah, I think everybody just feels like we’re in a place that nobody’s ever been in before in humanity. Everybody was reminded you need survival utensils and things.
T-Mo: I was just trying to piggyback on what Gipp was saying, that the times definitely add a lot of inspiration on the music that we make. We just wanted to offer the newer generation a way out of the monotony, a way out of the same type of music all the time to try to put some substance back into the music, try to put a little consciousness back into the music. You’ve got to try to offer a little bit of the knowledge and the wisdom Goodie Mob entertained over the years. I’ve been in the industry 25-plus years, so I think we got a little something to offer.

It’s interesting you guys were so young when you wrote the album because I feel like there’s so much wisdom. I read it was mostly dedicated to CeeLo’s mom who passed away, which is obvious on the song “Guess Who?” Was that song tough to write?
CeeLo: It wasn’t hard to write because I was very hopeful and I was very mature beyond my years, I would say. So a lot of that hopefulness and that optimism was shared when I rapped, “The doctor said that you’ll never talk again/But you’re talking so I know that you’re going to walk again, but take your time.” I had always felt like her character was so strong and resilient that she would ultimately rebound from it. And even years and years later, I would say, if she did not decide to transition and go up, as they say, on her children’s behalf, I think she probably would’ve ultimately come back and become whole again. But she decided to sacrifice herself for me and my sister.
Big Gipp: At the time, it wasn’t hard to write because I feel like we were so appreciative of just being able to say that we made it. I think that was a way for all of us to give praise to our mothers. I think we had never heard anything like that in hip-hop before. From my perspective, “Guess Who?” was a real special song because I think all of us gave our parents, especially our mothers, a song on the album that they’ll always be like, “Well, y’all did something for us.”

What about you, T-Mo?
T-Mo: Oh, it was tough for me to write it. I ain’t even going to front. That was one of the hardest records that I wrote. It was very tough. I can’t explain why, but I love my mama and got a lot to say about it. It. I will say that it’s funny that we made that song about our moms. We made it organically, naturally and honestly. 2Pac came out with “Dear Mama” at the same time, which was a similar type of song. We were not inspired by him. He wasn’t inspired by us. That was how we were thinking. That was something he was saying. It was just ironic that we both came out at the same time and gave tribute to our moms on our album. 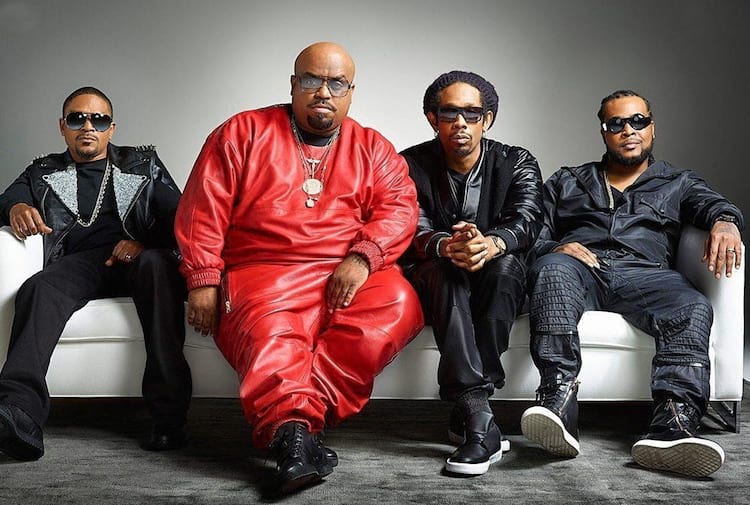 What inspired the Outkast collaboration “Git Up, Git Out”?
CeeLo: Well, this refers back to my mother again. My mother was a strong personality and she was not lenient but was liberal. My auntie was the artist in our family; she was a singer. That was the connection that we had. So my auntie took me in and I lived with my aunt for a greater part of my young adolescent life. I had one of those mothers who will be like, “Hey, you want to go to work or go to school?” I’m like, “Work.” “Okay, well, do you want to get out of the house or go somewhere? What do you want to do?” I’m like, “I’m out of here.”

So you went to live with her?
CeeLo: Yeah, that’s why I said in the song “My auntie had enough/Times was rough/My auntie got enough problems of her own.” That was a real conversation—a conversation with myself and, not necessarily a verbatim conversation with her, but it’s the gist of it. I wrote that rhyme in a notebook and I said to myself that if I ever get the opportunity, this will affirm to her that I got my head on straight. I’m paying attention. Even as the song says, “But some time must be invested for this to be manifested.” That verse is the absolute truth.

The line, “Don’t spend all your time trying to get high” really resonated with me as a teenager, especially when I was on a destructive path at the time.
T-Mo: This message has lasted for 25 years. It’s been used by all artists here and there. It just shows when you say something that’s real, it’s going to stick to your chest like concrete. It’s going to always be with you, magical music. Being able to say we have a number of records people can really go to and say, “Man, this record helped me live,” that’s the reason why I’m good in my head to come back. Exactly. Are you ready? Because we’re about to educate you one more time.

I think people would find it pretty interesting that Future is Rico Wade’s—of Organized Noize—cousin. Do you think people understand how deep the Dungeon Family really goes?
T-Mo: I’d say they don’t. They don’t understand how deep we are, but look at Atlanta after Outkast and Goodie Mob. Every star that has been formulated in Atlanta comes from the Dungeon Family, because it was one of us that one of them kids loved and formulated their style after.

Many years from now, what do you want your legacy to be?
T-Mo: That we just told the truth. I just want everybody to know that I was saying something. The whole time we always kept some substance in our music. We always used our platform to try to enlighten people, try to help the people—and that’s what we stood for. We stood for hope. We gave hope to the common man from a common perspective. We were blessed. We’re blessed by our actions. We’re very, very proud of what we did for the hip-hop community. We just want people to love us for that.
Khujo: I want most folk to recognize us when they have a Top 20 MCs list. I want us to be up in that motherfucker right there. Because we already got it to where we was inducted into the Georgia Music Hall of Fame, so we’re recognized by most of our peers down here in Georgia.

Who are some of your personal favorites?
Khujo: Shit, I ain’t going to lie, man. I gotta start out with what kind of really influenced me. I got to put Fat Boys up there, Whodini, Big Daddy Kane, Run-D.M.C., just to name a few. But down here in the South, I got to say Sheek Louch down there in Miami and the Geto Boys in Texas.
Big Gipp: Some of my faves are Chuck D, Ice Cube and then E-40, Too Short, DJ Magic Mike and Kool G Rap.
T-Mo: My favorite, that’s 2Pac, Biggie, KRS-One, Busta Rhymes and MC Hammer. He wasn’t no lyricist, but that man is an entertainer.
CeeLo: I was a big Beastie Boys fan. People don’t even know, but I go out way back to Cooky Puss. I got heavy into them. Licensed to Ill was just the shit. And Paul’s Boutique, it was met with a little apprehension but I thought it was dope because it was just crazy. And then Check Your Head, that’s one of my favorites. I hope Ad-Rock—and long live MCA, we love you, dude—but I hope Michael Diamond and Adam Horowitz get the opportunity to see this interview and know what a big fan they have in me.
© 1981–2021 High Speed Productions, Inc.