Way to go! The annual Halloween skate jam is tonight and you put off getting a costume until the last minute again. Good thing we put this little buyer’s guide together to help you get some ideas. With a little bit of ingenuity, and in some cases a shit load of money, you can still make it to the park with a kit that will make you look like a total Halloween pro (literally). Two-hundred dollars for one night? Why not?! –Ted Schmitz 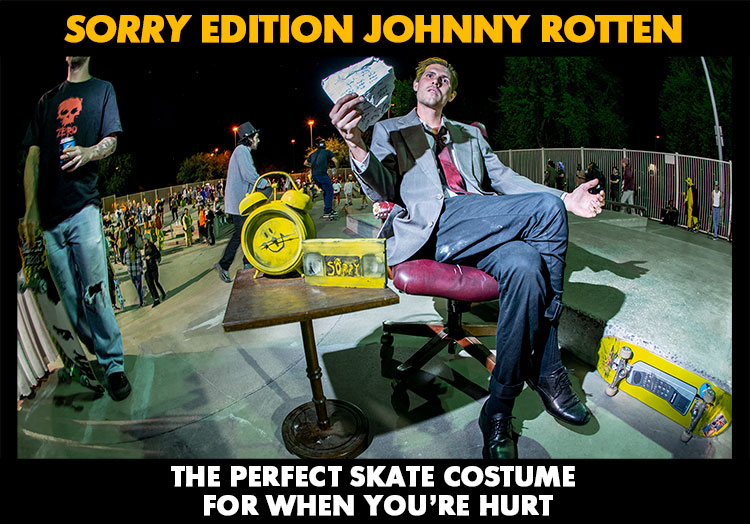 • Start with a reference to a famous non-skater cameo from an early 2000’s video. This way, you don’t have to keep talking about your rolled ankle.
• Prop Alarm Clock: $5 (plus three hours of your only day off making four trips to separate Goodwills)
• Don’t You Dare Risk An Actual VHS copy of Sorry: 50 cents, one of the six tapes of Jerry Mcguire Goodwill has and some spray paint will do
• End Table: $9 at Goodwill (or just cruise around the neighborhood on bulk trash pick-up day)
• Prop Script: $2 (or take your brother’s notes he needs for English 201 tomorrow)
• Spray-On Hair Dye: $8 at Party City (or, for bonus punk points, just use the spray paint from your props)
• Suit Combo: $20 at Goodwill (or reuse your button-up and blazer from your Greco phase)
• Study Chair: $12 at Goodwill (not quite as elegant as the real deal but you can catch a roll-in if you’re desperate to make the edit)
• Dress Shoes: $10 at Goodwill (or just borrow your roommates “job interview/ Tinder” shoes) 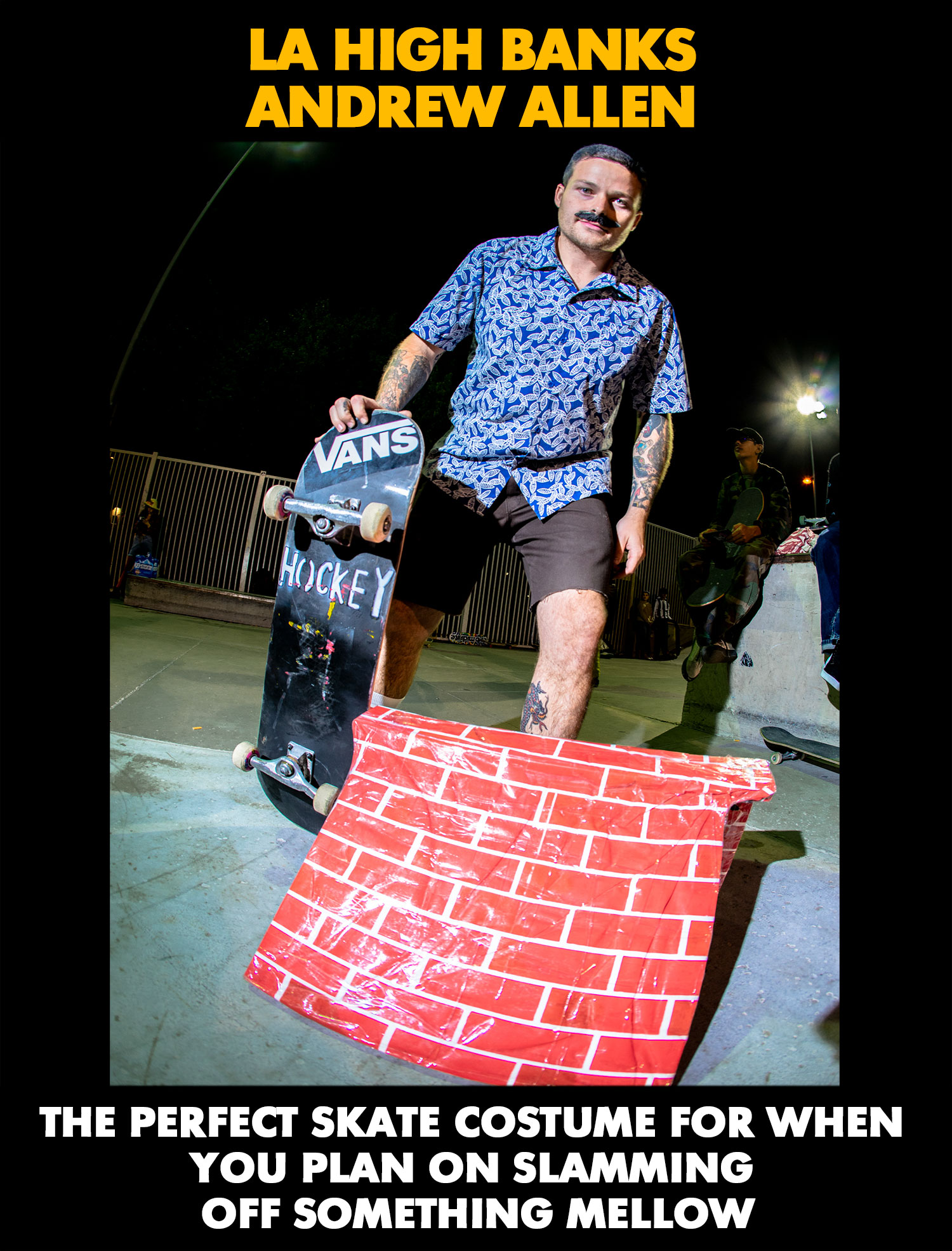 • Pick a kit from his career skaters remember fondly. You’re gambling if you think you can pull off all-white with stockings; kids might think you’re just out of shape Nyjah.
• Bootleg Hockey Board: $4 for spray paint (Spray paint your shop board black then write the word “HOCKEY” on it. If you want to go all-in, you can buy an actual Hockey board, but that will triple the price of your costume.)
• Vans Sticker: $0 (get your shop-flow homie to cough up one of their Vans stickers they got from a rep)
• Prop LA High Bank: $12 for wood and $2 for brick-patterned plastic wrap (Make sure it’s barely skateable so when you try that switch wallie on flat, you get completely pitched)
• Fake Mustache: $3 at Party City (or grow a free one out of your face like a full-blown creep)
• Hawaiian Button-Up Shirt: $5 at Goodwill (or, for extra scumbag savings, swap the tag with whatever color tag is half-off that day)
• Cut-Off Shorts And High Socks: $6 at Goodwill (or just take them from your roommate after they leave the apartment first dressed like Heath Ledger’s joker) 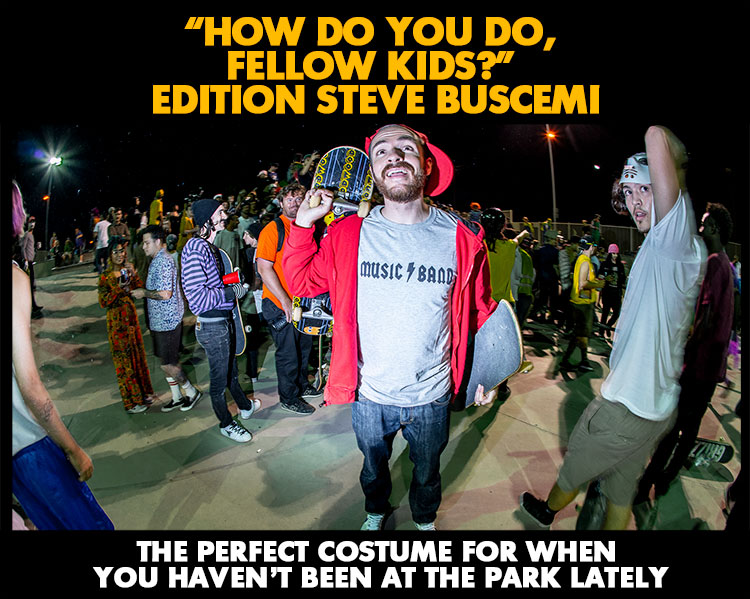 • You relate to the 50-something-year-old undercover private eye character, Lenny Wosniak, who infiltrates the youth culture by wielding two skateboards and a rock ‘n’ roll tee shit. This is almost too close to home for you
• Blank Red Hat: $7 at Walgreens (You actually bought it before you had the idea for this costume, but this is your only chance to leave the house in it)
• Two boards: $140 (You’ve been gone so long, you might as well get a new complete and then just hold your old one with the yellow-ass wheels over your shoulder. You can also just borrow a board from someone who skates even less than you these days)
• Red Hoodie: $0 (You had a Michael Cera phase… it’s okay)
• “Music Band” Shirt: $24 (This is one of the greatest wardrobe pieces from original material. Don’t fuck this up by getting a $4 Goodwill shirt and drawing on it with a sharpie. Spend an hour in Photoshop and send the graphic to the custom tee place by the Yoga studio)
• Jeans: $40 at the Levi’s outlet (You haven’t had jeans in a while and this is a good way to start segueing out of your current cargo phase)
• Dad Shoes: $0 (Just take some Kirkland Signatures from your dad or your roommate’s dad or that dad you work with) 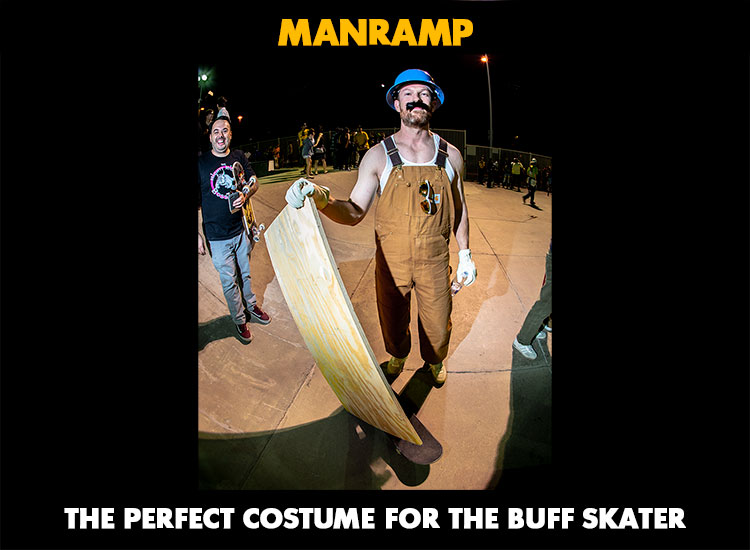 • Yes, a lot of people are going to go to Halloween skate events as Manramp, but most of them won’t really pull it off. They’re just too scrawny. This kit is for the crew member that’s actually built and that will hold the plywood steady.
• Other Options For The Buff Rippers: Biebel or Weckingball, but if you see someone in the other costume, you actually have to fist-fight
• Blue Hardhat: $7 at Home Depot (Don’t fuck this up by thinking a yellow one is good enough. Don’t be that guy)
• Work Gloves: $10 at Home Depot (You can also just nab a pair from your weird neighbor’s side yard. That smell isn’t coming off your hands for weeks, though)
• Carhartt Overalls: $100 (You can try to luck out at Goodwill, but, yeah, they actually cost that much. Maybe see if Jon Dickson has a hookup?)
• Fake Mustache: $3 at Party City (or ruin your beard by trimming it down)
• Workboots: $44 at Ross (Who knows? They might be skateable. Grindline guys make them work)
• ½”x3’x4’ Sheet of Plywood: $17 from Home Depot (Don’t skimp on the wood! Get something you’d be proud to steal from a construction site and use on your own ramp)
• Sleeveless Shirt: $0 (You’re buff. You already own one) 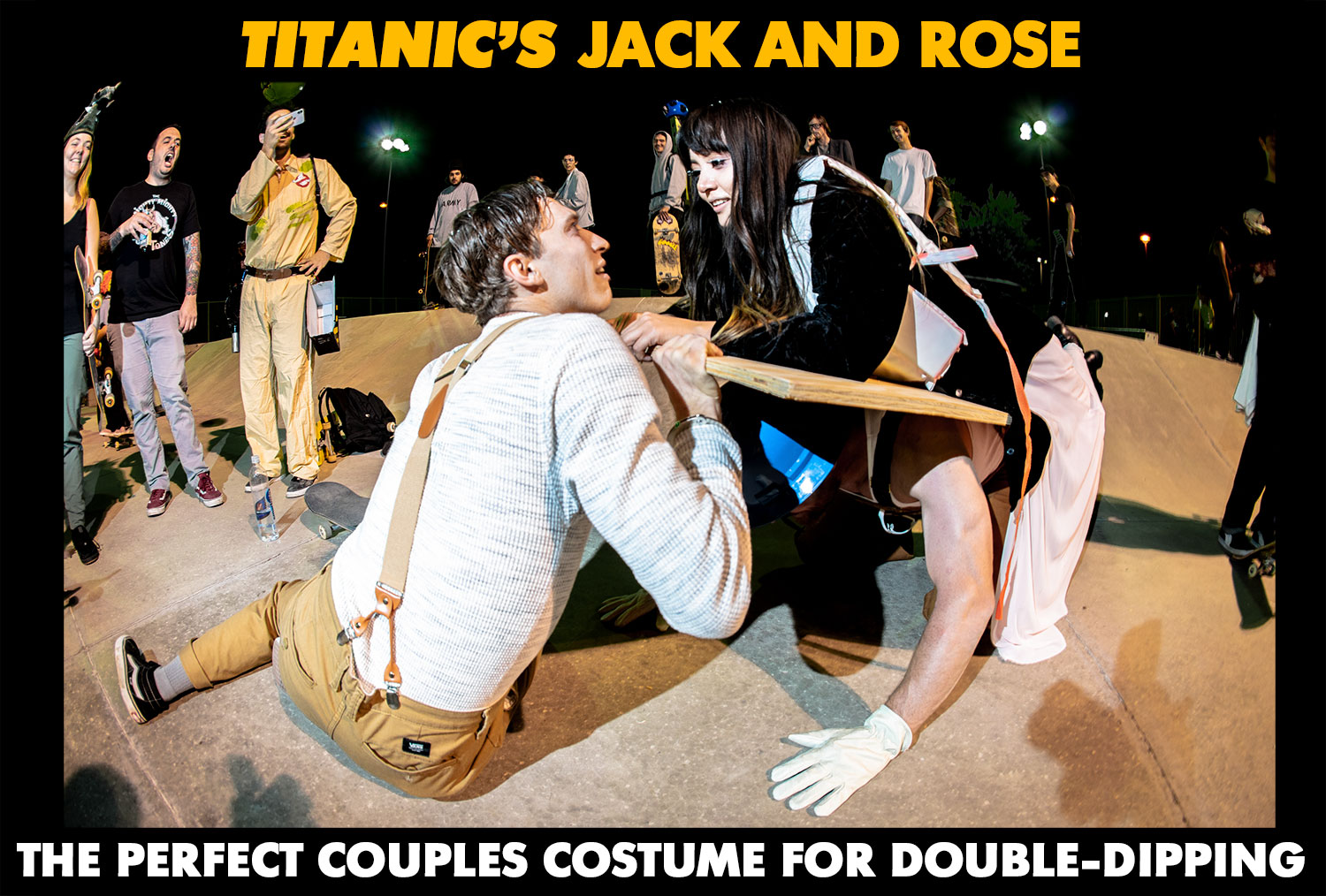 • This costume is going to get you a pass at the park and at your non-skate house party later.
• Suspenders: $4 at Goodwill (or you can be a real moron and get a $30 pair at Urban Outfitters)
• Hair Product: $7 at CVS or Target (It won’t make you Leo, but it’ll keep your hair looking slick when you flail a botched bigspin up the Euro gap in front of your girlfriend)
• Life Vest: $20 at that shop on the other side of town that you’re pretty sure sells wakeboards
• Old-Timey Fancy Dress: $14 at Goodwill (Chances are that it hasn’t been washed since the Titanic sank, and it has the vaguely nautical funky Goodwill smell to prove it)
• Manramp Substitute Door: $0 (This is a key part of why this costume works for double-dippers. Any skate event you go to will have a Manramp for you to re-enact the Titanic ending, any house you go to will have a table. Take a photo on each and you’ll be a hit with skaters and normies alike) 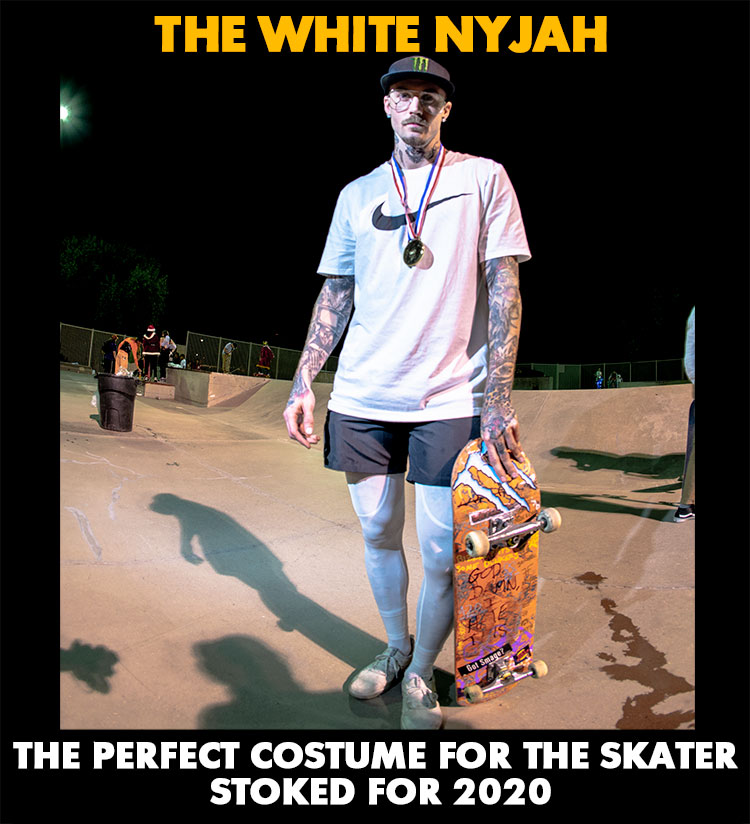 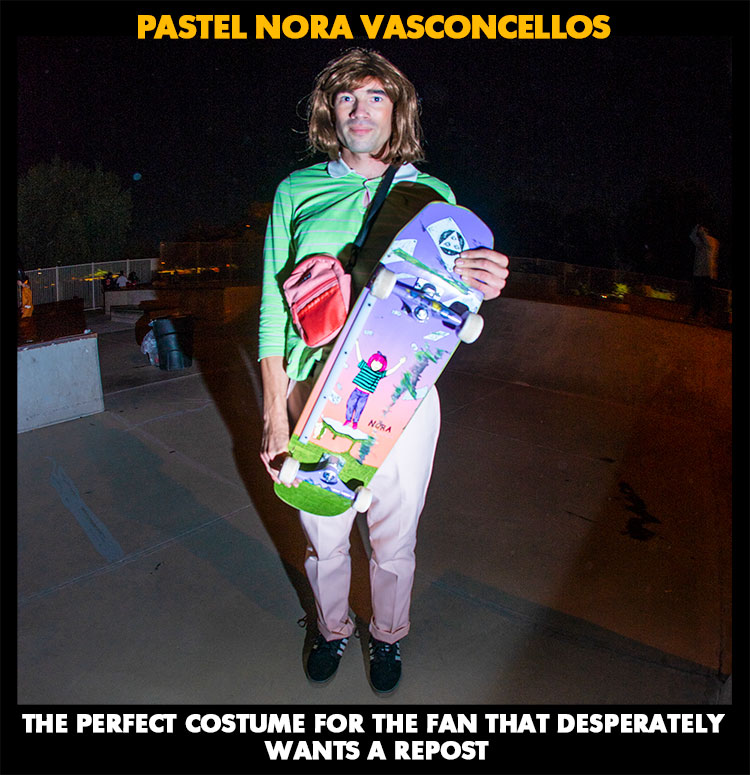 • If you pull this one off right, you’re going to get that validation you so desperately need (an Instagram story repost by Nora herself)
• Bob Haircut Wig: $20 at the wig shop downtown (Party City plastic wigs won’t cut it if you hope to land that kickflip backside disaster)
• Green Striped Polo: $9 at Goodwill
• Bra and Stuffing: $0 from your girlfriend or girl friend (if you thought grip-thumb was bad, just wait to see what that wire can do to your ribs)
• Pink Bumbag: $35 at your local skateshop (or see if one of “the kids” will let you borrow theirs for the night)
• Nora Complete Setup: $140 at your local skateshop (You can also go to Vans Park Series and wait for Nora to give her board to a little girl, then steal the board from that little girl. Watch out for security, dads and a lifetime of overwhelming shame)
• Pastel Pink or Purple Chinos: $22 at your local skateshop (Finally, they sell pink Dickies!)
• Adidas Shoes: $60 at your local skateshop (Nora’s pro model is most likely sold out, so just rummage through the sale shoes for anything with three stripes) 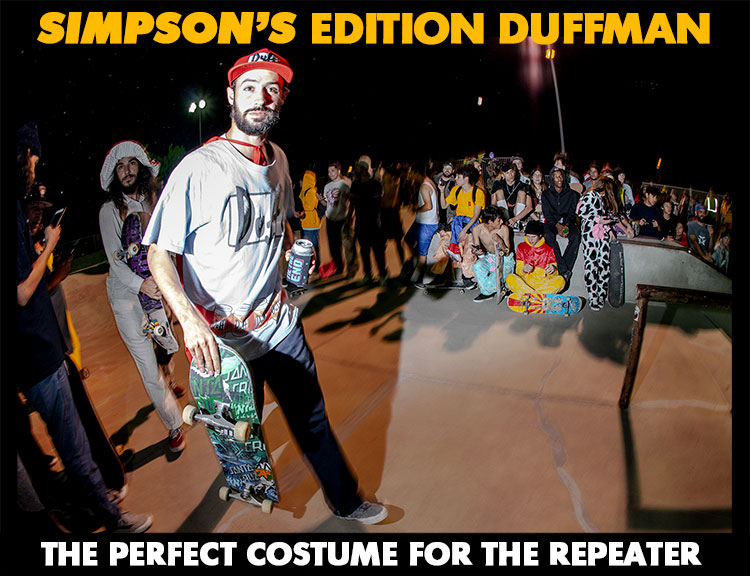 • You aren’t playing the $100 every October game. Pick something recognizable to skaters and non-skating bar-goers alike. Cartoons are good for these ideas. You wanna get ten years out of this kit for less than $50. Critics might say you’re uncreative. You’ll unconvincingly tell them it’s funnier every year.
• Simpson’s All-In-One Duffman Hat/Tee/Cape Combo: $30 (after ten years this getup only ends up costing $3 per Halloween)
• Actual Beer For Effect (straight-edge skaters can koozie a Sprite): $.73 per can (bonus points if you wanna also spend two hours in Photoshop and pay $10 to print a Duff can label on that vinyl stuff)
• Dickies Will Do: $24 at your local skateshop (unless own a pair? You probably do. Nevermind)
• This costume is about economy; don’t get hung up on the details. (“Duffman is supposed to have gloves,” is what those chumps with $150 costumes say)
• Santa Cruz board: $0 if you’re their newest pro. Congrats, Kevin! Now use some of those royalties on a new costume.
• Patience: $0 (You’re gonna need it to keep cool while year-after-year drunk skaters and karaoke fiends tug on your cape)

o Total Cost: $35-$40 (depending on beer budget)
o Total Prep Time: 15 minutes
o Total Time Worn: 4 hours each Halloween for a decade (maybe also include the two occasional days a year when you start drinking at 11 am)