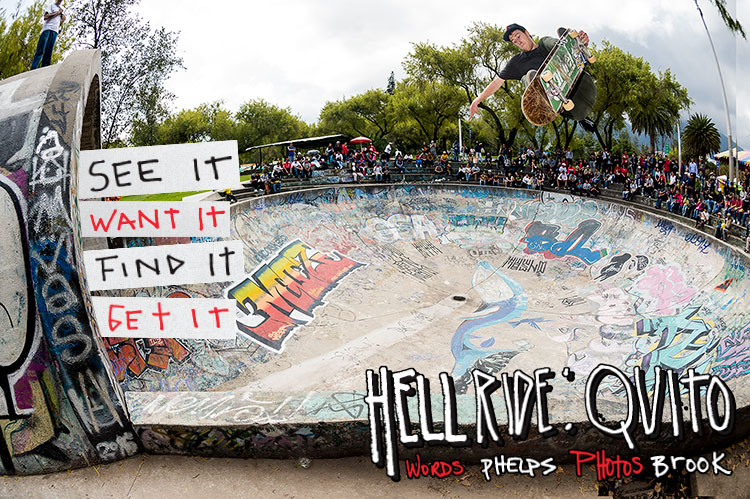 The last three years I’ve been starting out the year with a trip to South America. Following the Sun in life is a good rule. With this being the first trip I’ve gone on without Stone and CK1, it was up in the air. Got a phone call from Grant who asked me if I would go to Quito with the boys. Can’t say no to that. Posted up at a hotel down the street, we became the new locs. This tailgrab by SOTY ’11 is way over 10,000 feet elevation and six feet over the edge is way, way out 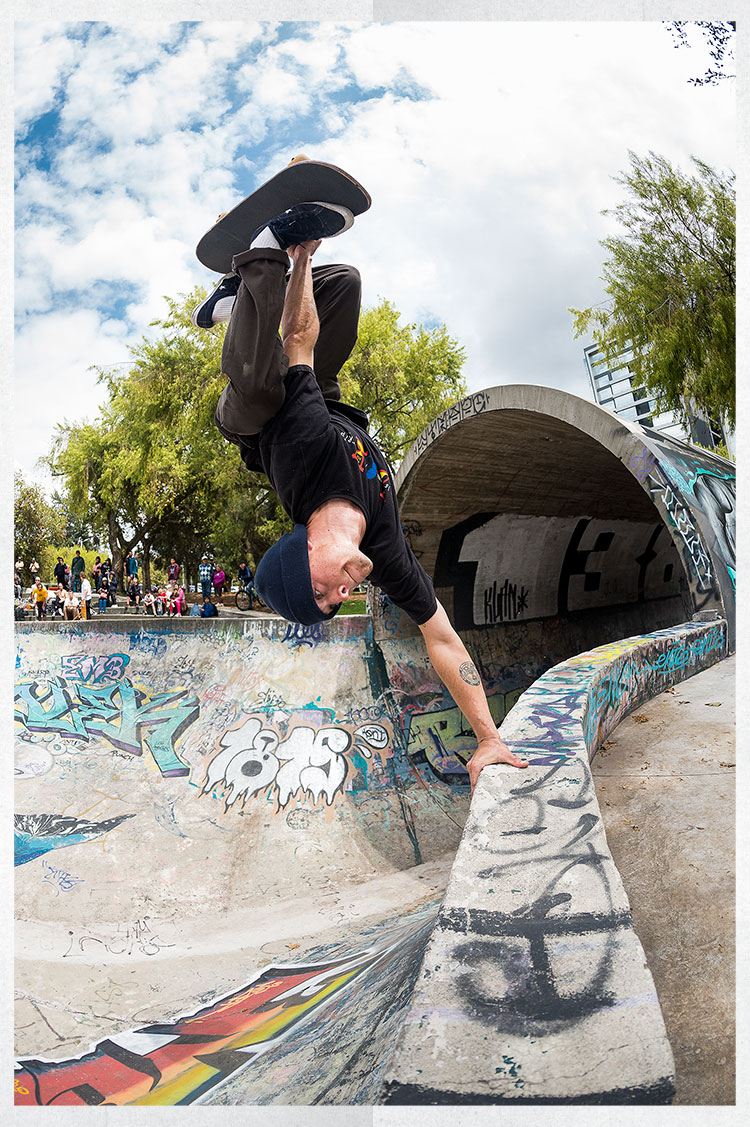 Some folks don’t care about mags. Raney ain’t one of those; he knows them like the back of his hand. When old and new collide it’s magic. Kids nowadays do handplants—Raney busts inverts. This Smith vert on the edge of nowhere is why he is pro. He died in Israel, ripped hard in Europe and absolutely killed it in Quito 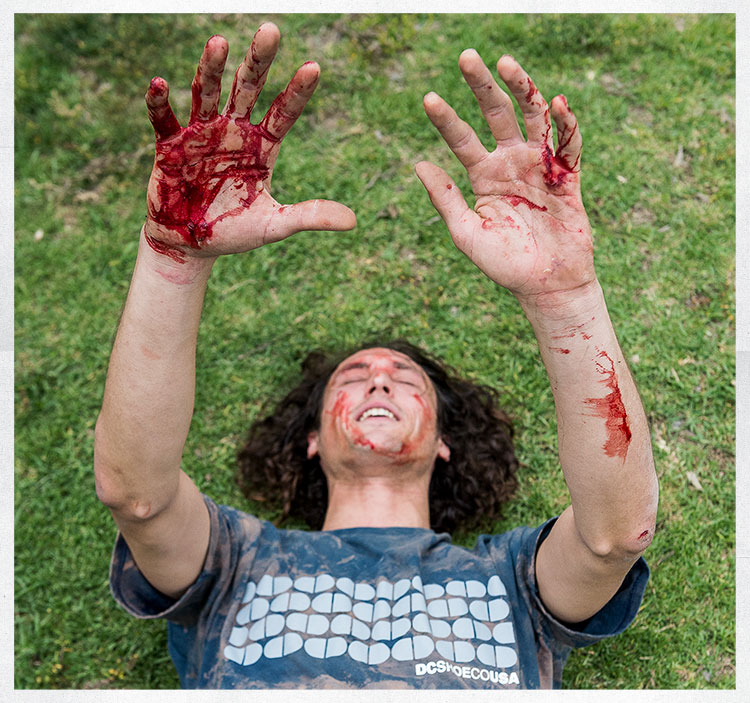 Baptized in blood, born of fire, Evan Smith ain’t afraid to spill the fluid that lives inside us. Leaking much? If you don’t spill it, you ain’t trying 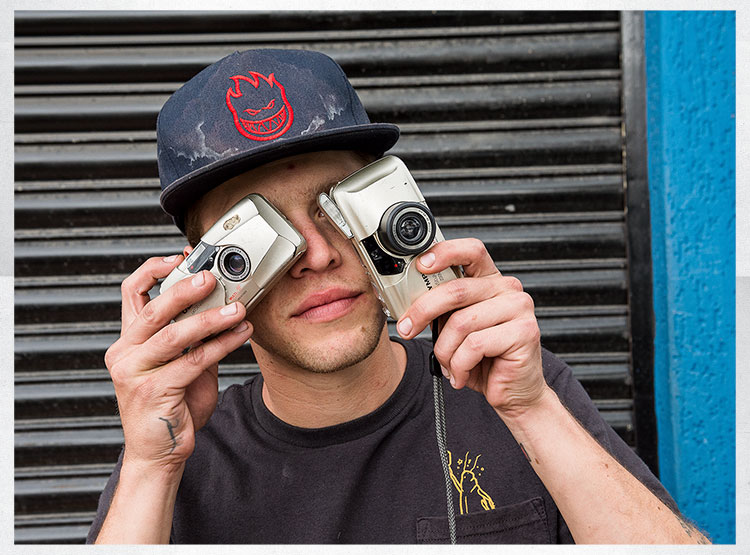 Classic parks in third-world countries need some help. To really keep it rev’d we had to bring our own concrete crew. Through magazines, skaters and concrete folks came together to build some crazy skateparks. All around the world there are spots that are left to fend for themselves. 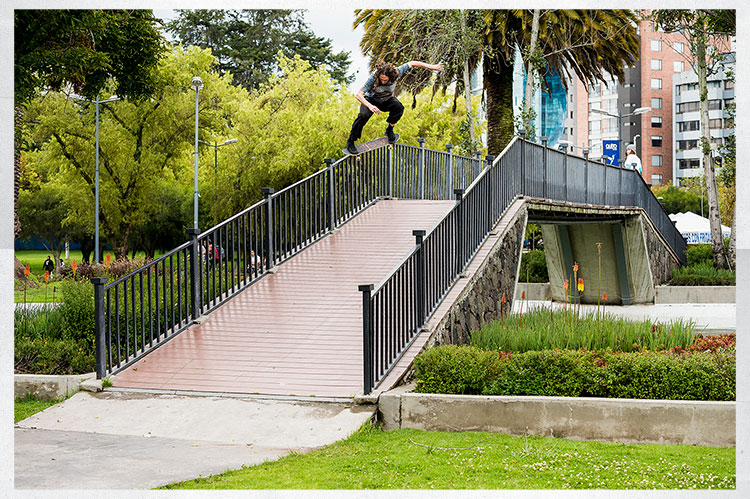 Evan got snaps. While others might Skymall the bridge, WhatEvs goes crookie monster and takes it all the way down the mountain 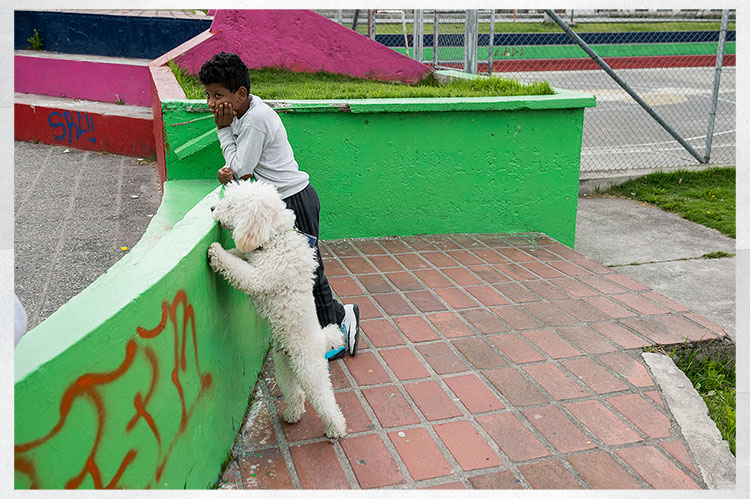 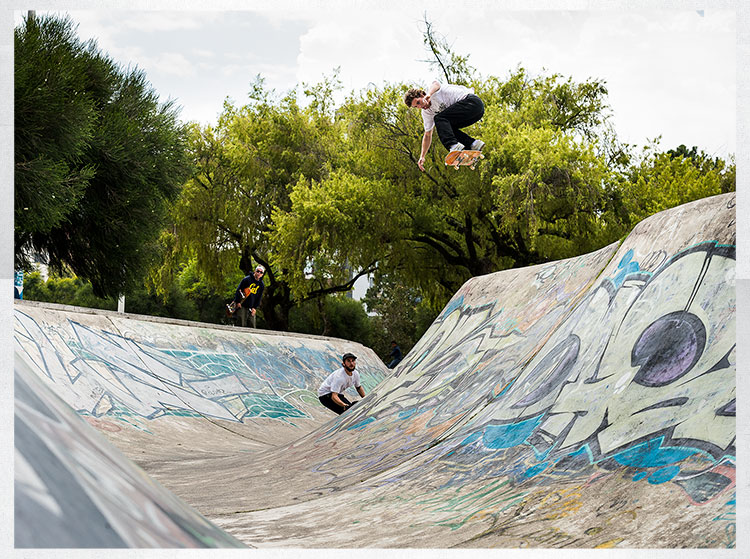 Having grown up in Santa Cruz, Raven is down for snake-run snaps. Pushing from the bank and rollin’ into this hip, he blasts off backside. You know it’s a make ‘cause if he hung it he woulda bit his tongue clean off. C’mon, Ray

Still haven’t found a nickname that stuck on micro-dose Evan Smith. This snaps late shove it is over a bar over your head. A good name is hard to find. Kinda like WhatEvs…

Nineteen-eighty was almost forty years ago and these parks go un-retouched. They saw it, thought they could build it, tried and—presto: black diamond skate pits. Elevation 10,000 feet, Quito has a lost relic from another time. Little bit Derby, some Colton and a whole lot of Upland, Parque La Carolina awaits all those that want a little danger in a world that is already fighting back. Mother Earth is pissed and while civilization crumbles we dance in the fire. See it, want it, find it, get it. By using this simple plan, life as a skater is just that easy. 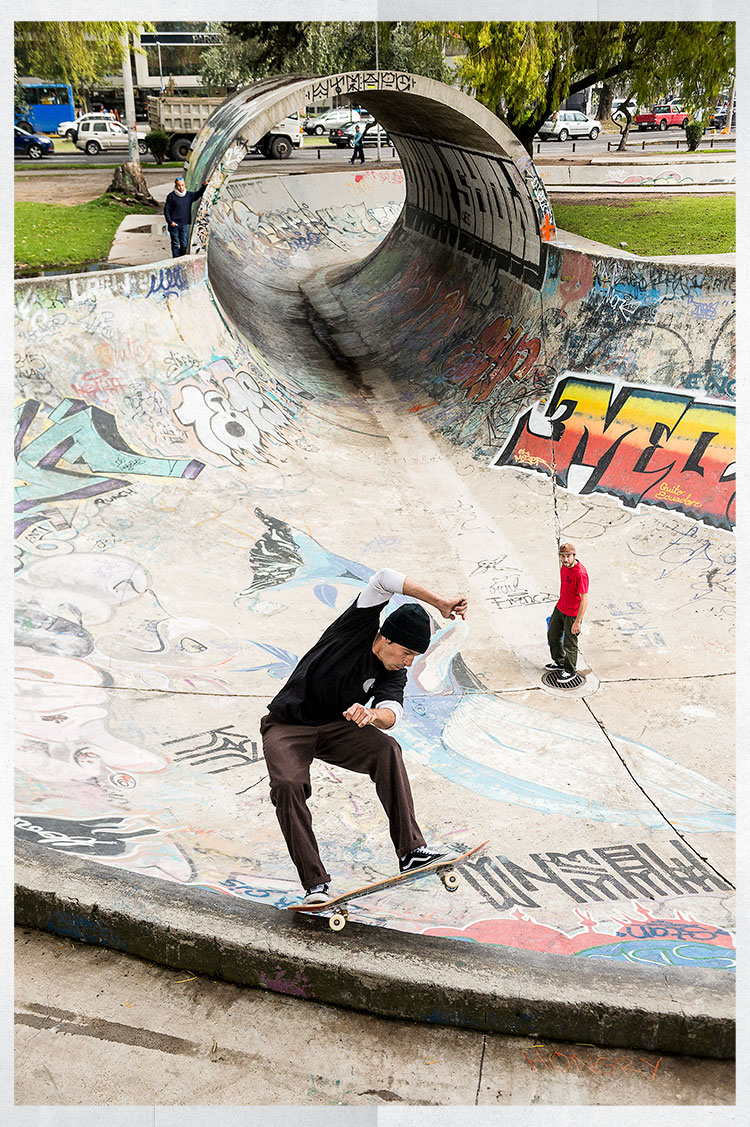 When you look up the words “frontside grind” in the dictionary there should be a photo of Pedro Hewitt. Been doing it like this for 35 years. You can do it? 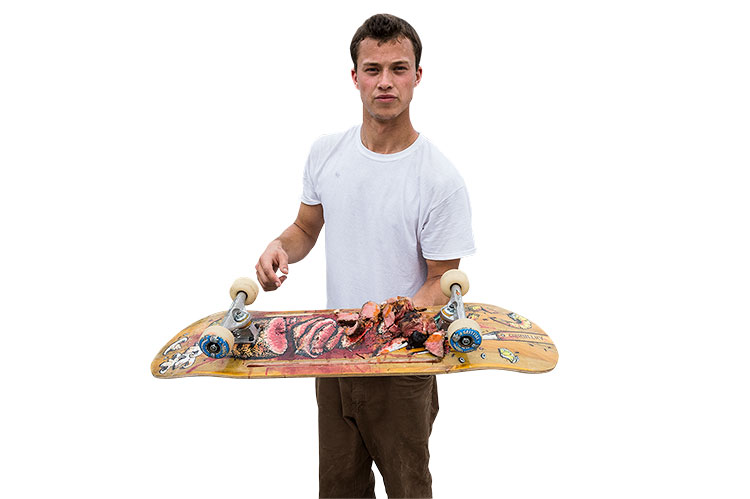 I first saw a photo of the park in 1994. When I first got the keys to the mag, I made it a priority to go to the places that were in Photograffiti and road-trip articles of far-off crazy spots. After seeing a photo that came my way of the pipe into big bowl, I made up my mind to get a plane ticket and find it. Thanksgiving in 1996 I was on a recon. mission with two other friends to get some. After the first trip I decided to get the best skaters I knew and have a rip ride. One year later, November 1997, I went with a proper crew. Cheap hotels, cold beer, unknown city and your friends? Who wouldn’t go? Cardiel, Salman, Karma, Carroll, Stranger, Hewitt and Ogden all combined forces and, shebang—the Earth moved. 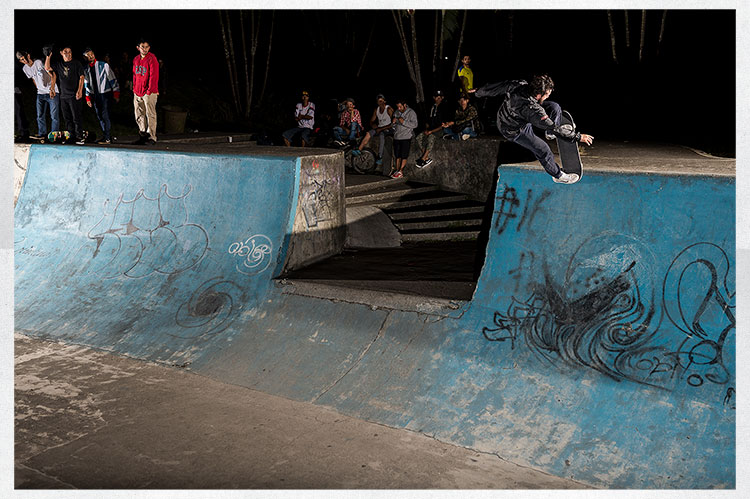 The power of gadgetry meets grit as Ronnie Sando blasts the gap and skids the noseblunt in Santo Domingo. When it showed up in my head, we trekked two hours to get it. This gap got smoked. 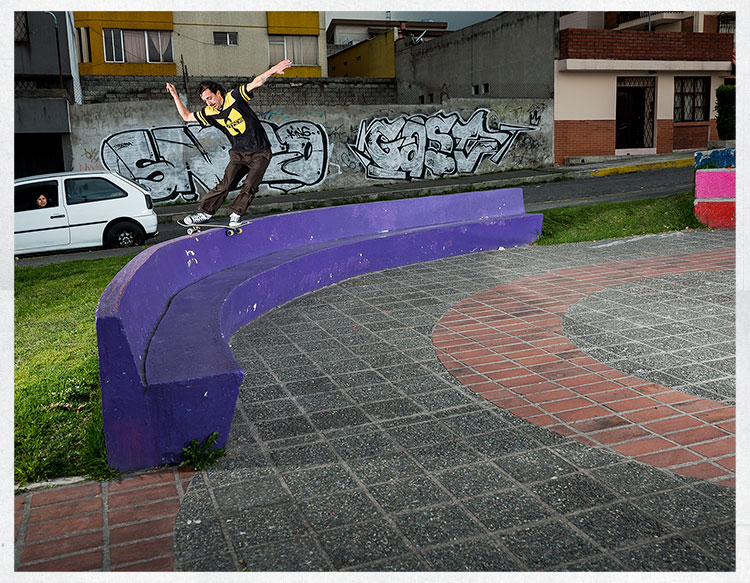 As you can tell by the woman in the car, it don’t look that hard. Frank, board slizzy the purple thing, not quite the blue thing, but it is some gnarly shit indeed. He kickflipped Wallenberg and bombed Kearny Street, bookends to a storied career. The rest is gravy. 36 Chambers 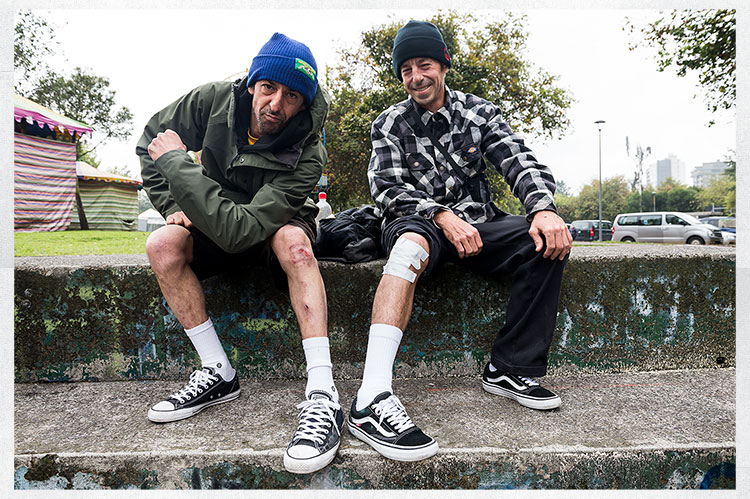 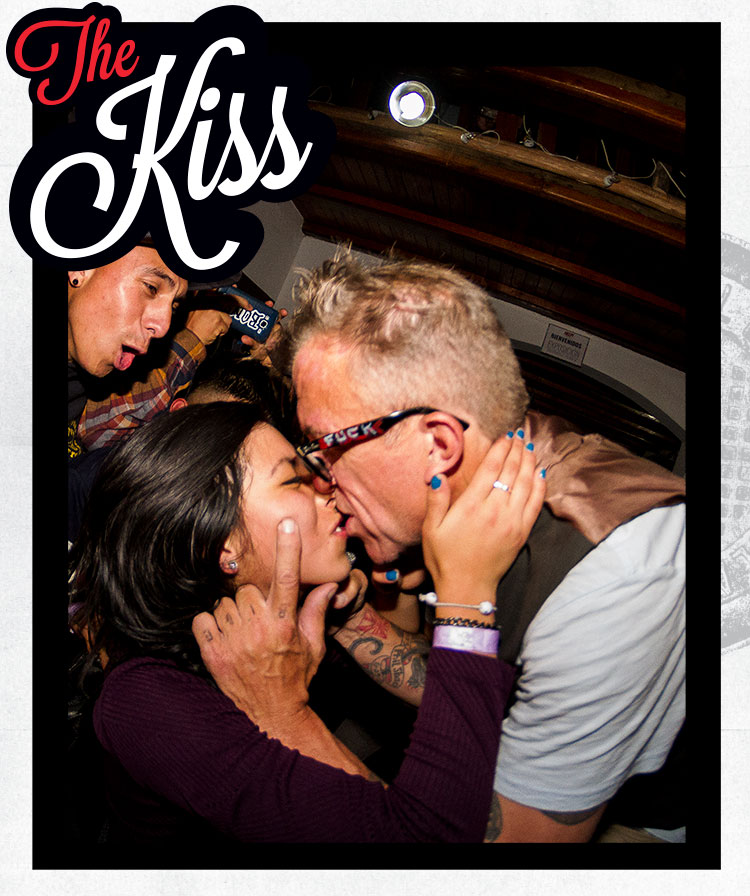 I was on stage with a microphone in my hand. I was giving the crowd what they wanted. They wanted to thrash; I gave them Thrasher. Me screaming while Fabio played drums and Evan played guitar. These kids were absolutely going out of their minds—gritting their teeth and making the whole building shake. Through the crowd walked a lonely girl. Much like Moses and the Red Sea, the crowd separated and there she was. On an embrace that ended with a simple kiss, the world stopped. The crowd erupted and where she goes with the energy that was given to her is all up to her. Like when the Titanic sank, 1,200 people entered the water, at least one held up a hand to be rescued. Help is on the way. This simple act made my day. In this madness of a world some take the time to help. Greed is good; help if you can 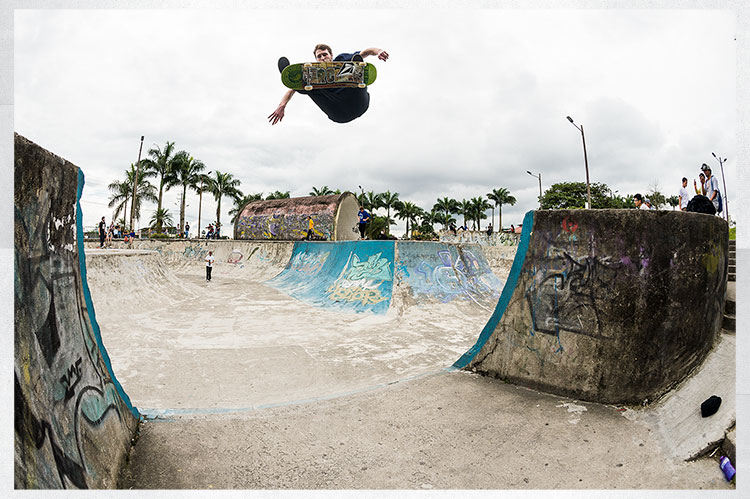 This is for sure the biggest channel kickflip in history. In the old days a FSO would have been rad. Now that Grant kickflipped it, you can’t go home again. Stakes is high 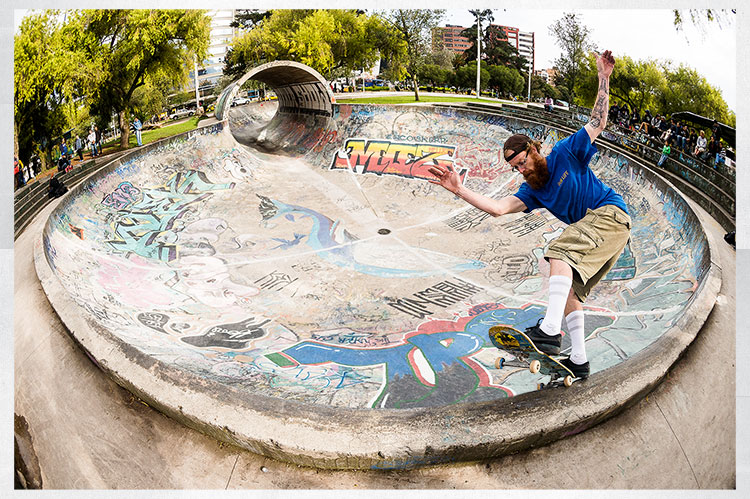 Charging down the barrel of the pipe into the competition bowl is fast. Livi Loc Div takes this 5-0 to fakie down south of the equator. Hang up and you slam all the way to the drain. You gots to believe 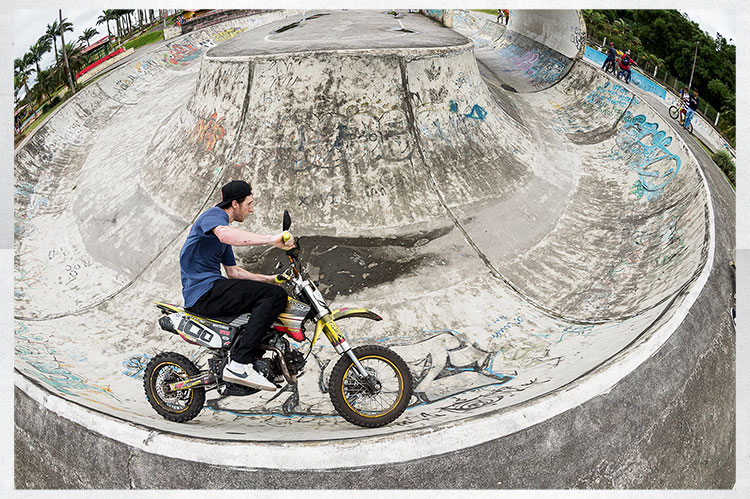 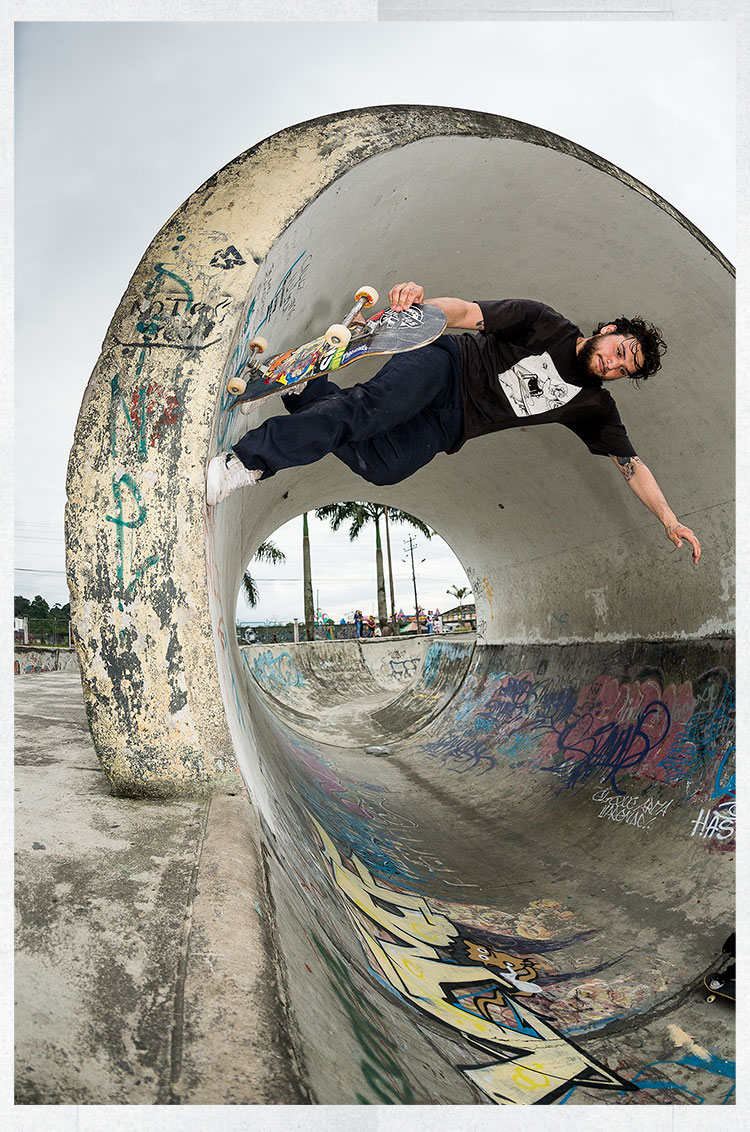 Fools have been getting down in pipes since the ‘70s. Add an ‘80s trick into that equation and the ol’ boneless goes over vert. Booster into the upper quadrant. White shoes? 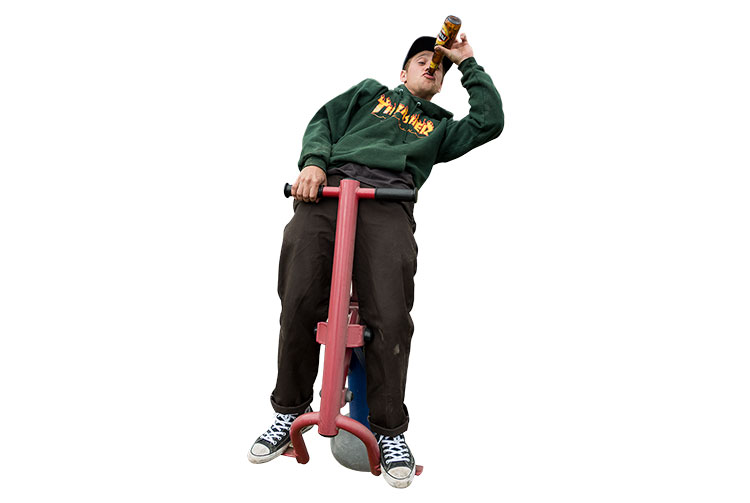 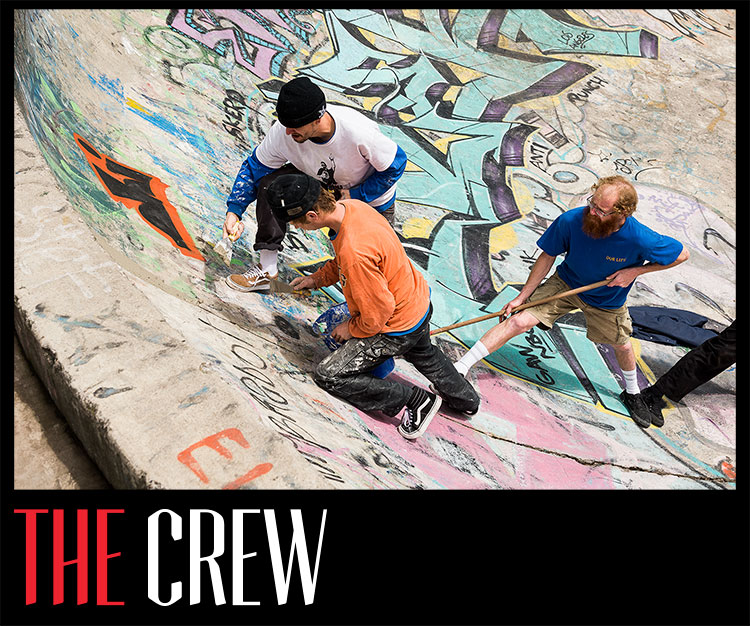 Nobody knew for sure how old the park was, but the cracks where they separated the pours were up to four-feet wide in some places. Grass and bushes growing up through the seams made it sit like a relic of the past. The locals didn’t really skate the end of the snake run/fullpipe or the ten-foot bowl with 20-foot trannys and a kink to vert—it’s like a giant, round Jersey barrier. Intrinsic with other parks in the area, this was their go-to design. Pete suggested it was at least 20 years old when they first went there 20 years ago. That’s 40 years of gnarlitude. We grabbed some bags of fast-setting high-strength grout (about 400 dollars worth) and went to town on the cracks. The locals gathered around and we had a stadium waiting on us. As the skies shifted from blue to grey we had to work fast. This stuff has a setting time of three minutes so small batches were mixed, placed and set. When we were done a session commenced of other-worldly levels, breaking all barriers of understanding as we realized we had done something wonderful for the skaters of that Quito park. The locals joined in with their 63mm Spitfires we handed out. Shit went down that day. P-Stone was tagged on the wall—we all grinded over it and completed our Hell Ride. It was the best feeling I’ve ever had in my life. 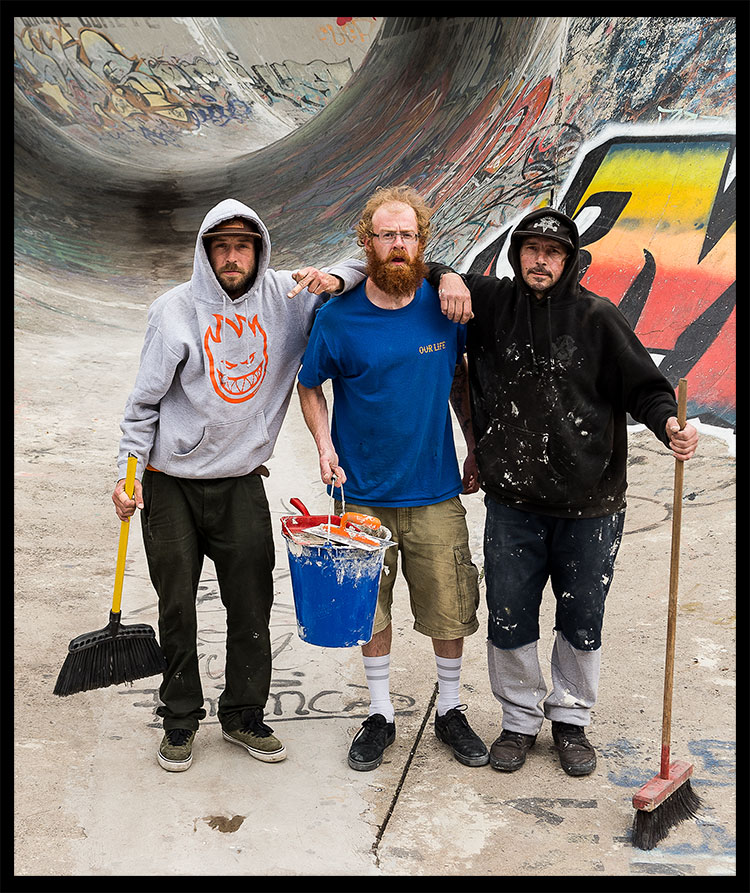 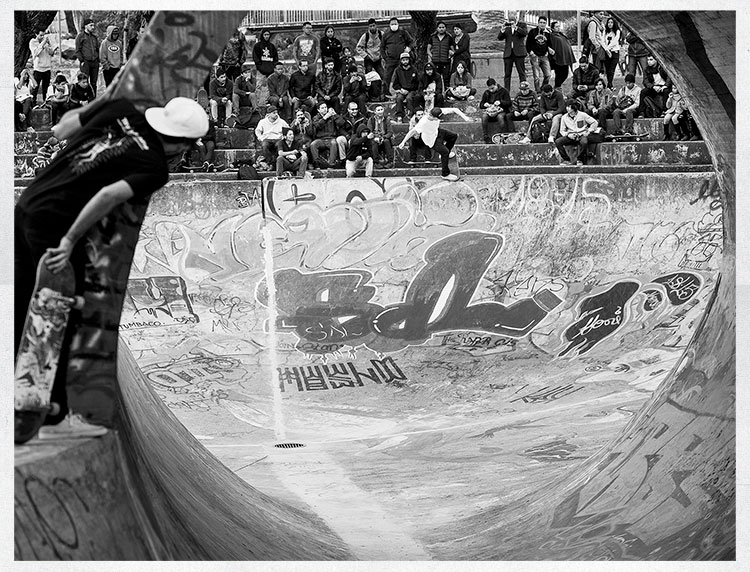 Fully recovered from his rap accident, Big Couch has all eyes on him as he does Preston’s trick on P-Stone’s wall. Salba sauce bluntslide

Using the formula of see, want, find and get, skateboarding wouldn’t be the same. We were sending out the messages and the kids who grew up with the mag had to go. Twenty years later the park survived and the new crew was the best in the world. Me and Peter are the only ones left of the originals and tramps like us, baby we were born to run. Found it, juiced it, lurked it, conquered it. After all is said and done, skating with your friends and screaming at the stars is what it’s all about. 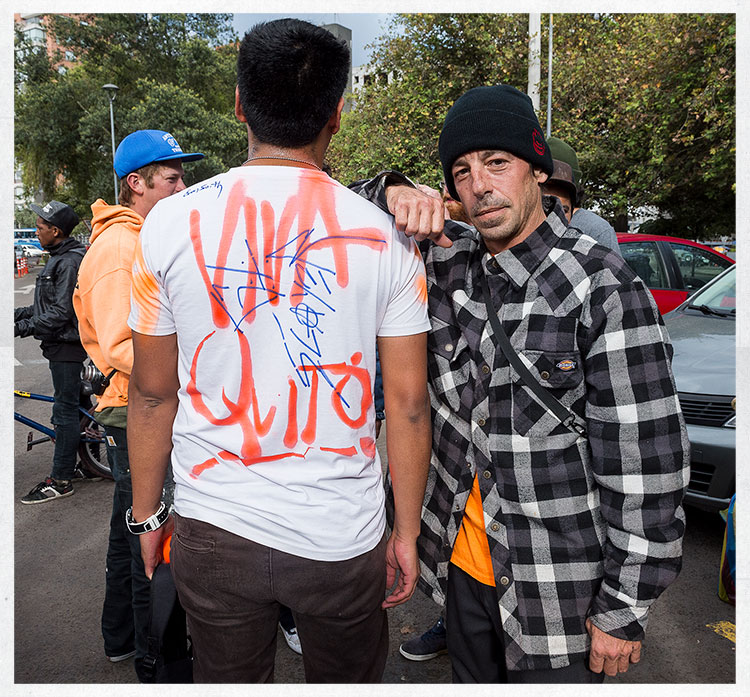 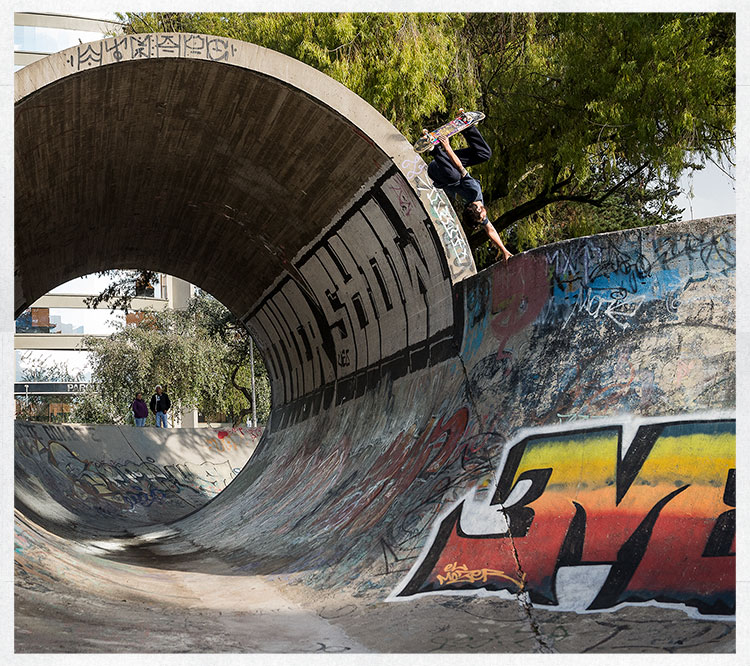 The eggplant is actually an Indy invert. If you ask me, it’s a simple trick. Not a handplant, but an invert. Sando is known for the old classics redone on planes of today. Used to be three different inverts in a row made the cut in pro vert comps

Back in the day, I’d take a photo of some random place I wanted to go, xerox it, put it on my refrigerator and every time I went to get a beer or make a sandwich I would ask myself, “Why am I not in Ecuador?” It was a kick in the ass to get out there and do it. Anybody can coach from the couch but long flights to random cities make the dream come true. Use this mantra of see it to get in any situation: a really hot chick, a new job—anything. Get something in your sights and nail it. Get off your ass and do it. Talking ain’t doing. The world is yours. Search and destroy. —Jake Phelps, still sitting next to you on the airplane 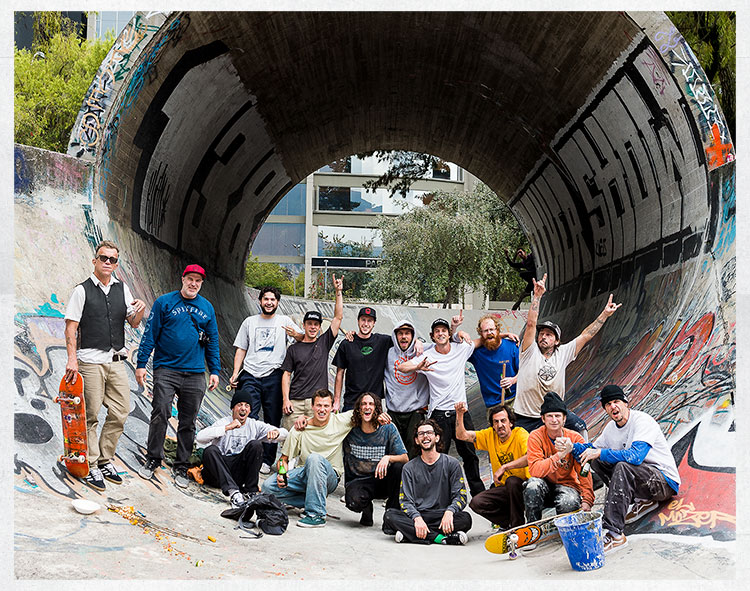 All the miles and all the piles add up for this crew. Over 500 years of stoke in this gang. Who would have thought we would have made it?