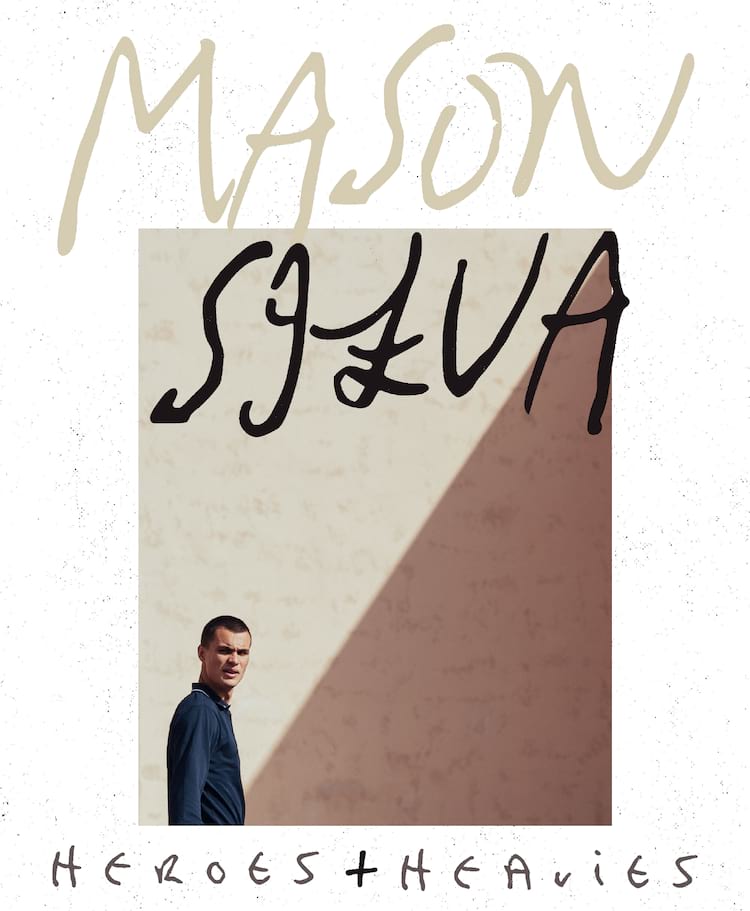 Mason’s one of the heaviest in the game, and it makes sense once you see his list of inspirations. Read his appreciation of towering figures like Heath, Reynolds, Barbee and a few you’d never guess in this piece from our April 2020 mag. 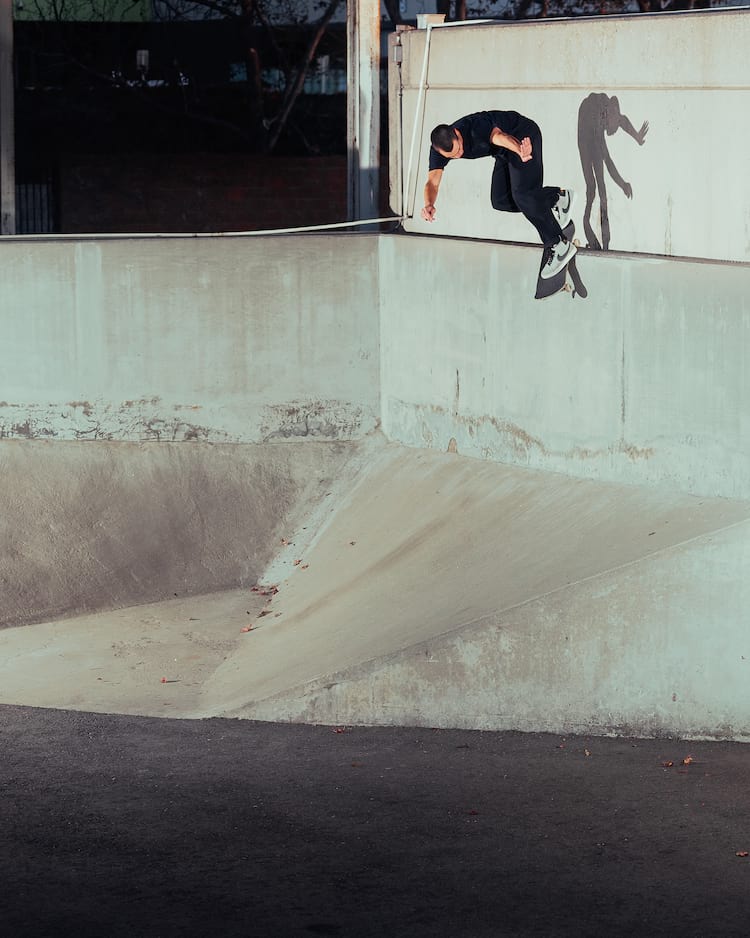 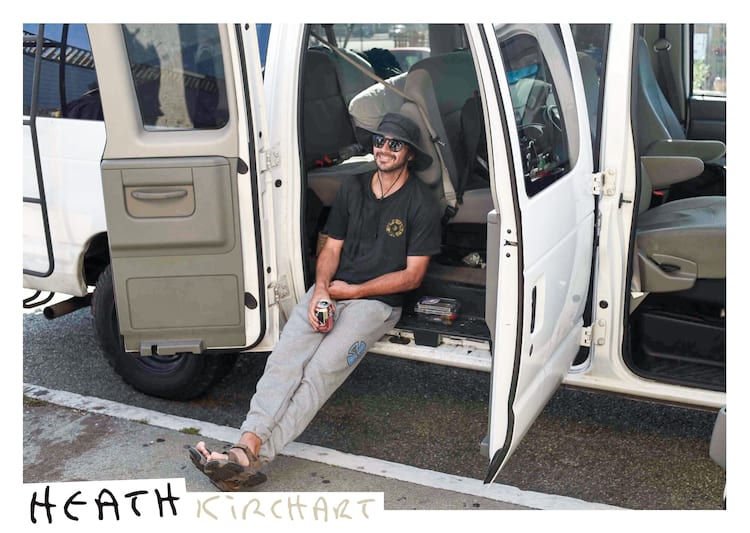 “I first saw Heath in This is Skateboarding. My brother brought it home. It was one of the most different-feeling videos I’d ever seen. I was obsessed with it—the song he used and especially that it was the first time I’d ever seen a slam used in a video to start a part. To start with a slam… it just made you feel like this is a different kind of skater. From there I wanted to know everything about him. You’d hear these rumors. I heard he sometimes was more stoked on a slam than landing a trick. He was one of those guys who could make whatever he did look cool—from the hardest trick to even a slam. He’d wear either all black or all white. You’d hear legends that he would do things like hide out in the bushes at UCI and knew what everyone was trying there. And that he only skated in the middle of the night and would disappear from a session on his motorcycle without saying anything. As a kid, it sounded like he was some sort of superhero or something. He didn’t follow any trends throughout his whole skate career. He did everything perfectly and did exactly what he wanted. Not too many people can say that. He had a passion for doing it his way—simple, powerful tricks. Watching him do a lipslide made me want to lipslide everything. When I got to meet him on a trip I liked him even more. I was ready for him to be sort of aloof or a dick but instead he’s this really nice person who loves candy and shoves an iPad in his back pocket instead of owning a phone. It’s like, Of course Heath doesn’t have a phone! He does what he wants. And then when he retired from skateboarding he starts riding bikes across America. Everyone looks up to Heath.” 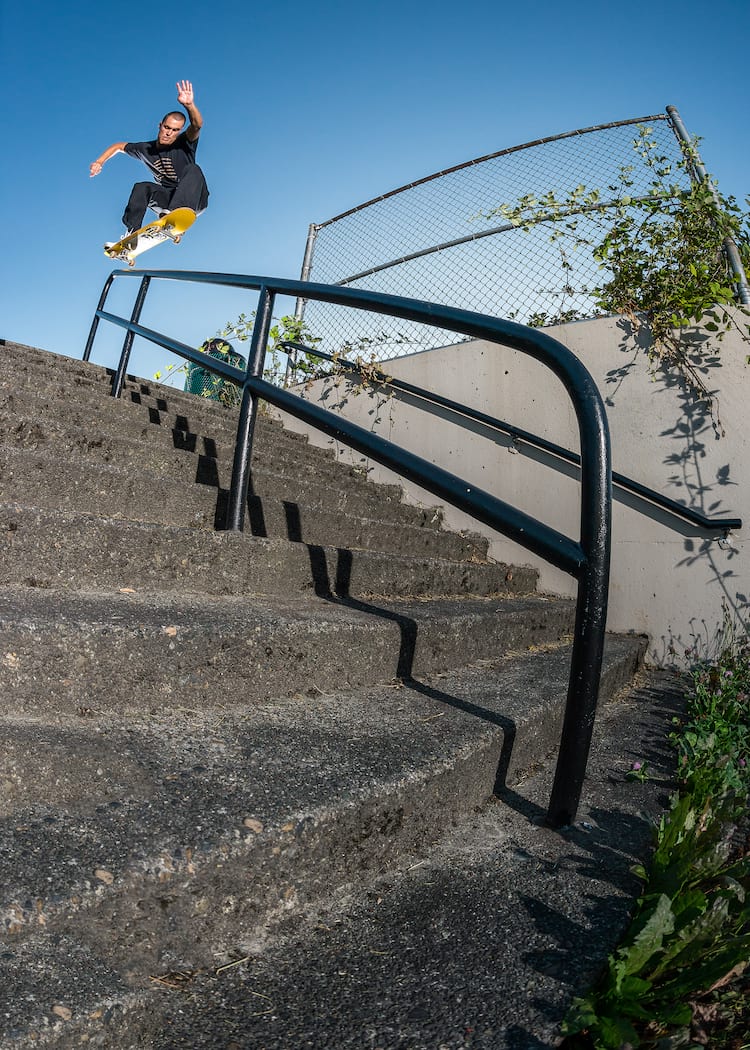 His heroes have always been cowboys. Over-the-back 5-0 for Cowboy Kirchart     Photo: Greengage 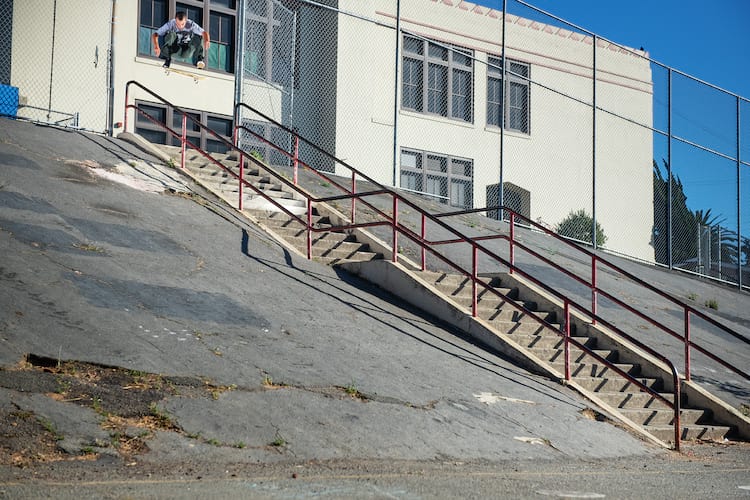 Alley-oop frontside flip into an asphalt mine field     Photo: Zaslavsky 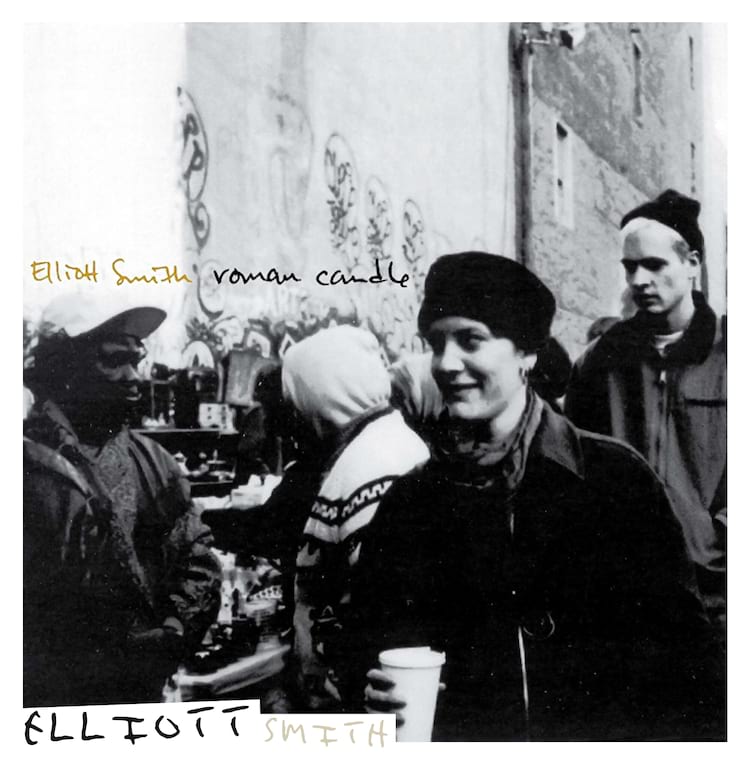 “I got turned onto Elliott Smith after Dylan’s part in Mindfield. I was only 13 when I saw that video, but dove deep into all of his music and got obsessed. I’m not even an emotional guy but the way that he sang and played was different than anything I’d heard before. I didn’t understand why he wasn’t the biggest star in the world. Like Reynolds and Heath, I admire him because he did things his way. He didn’t chase the music that was popular, he just did what he wanted. Roman Candle is one of the best albums of all time. It’s perfect. I’m not really sure if he actually killed himself, but it’s pretty insane to commit suicide by stabbing yourself. So heavy.” 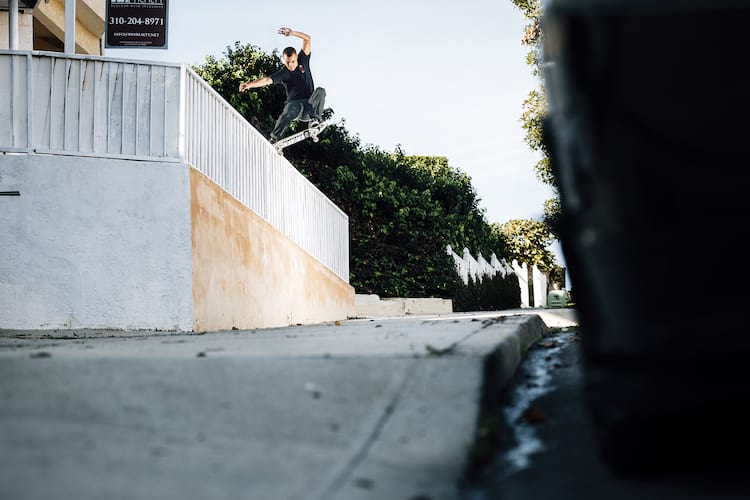 Not even Miner could deny the perfection of this massive backside bluntslide     Photo: Papke 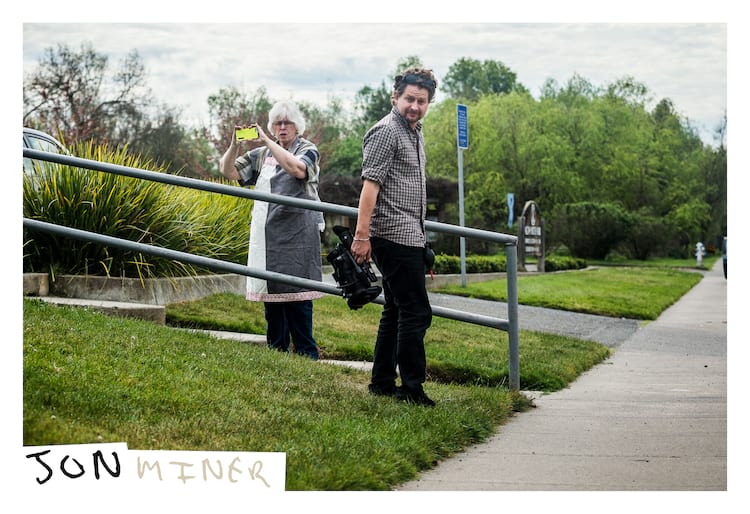 “One of the greatest filmers and editors of all time and he’s now someone I consider a friend, which is still crazy to think about. I was lucky enough to get to work with him on my last Element project. We definitely had some ups and downs but we came out of it better friends, I think. Going into it I wasn’t used to having the filmer be a perfectionist just like I’m a perfectionist. When similar people have to work together, it can be tough. He’d want me to redo a trick and I wouldn’t want to. It would get heated. I definitely told him “fuck you!” at one point. The funny thing about it was, when I got over myself and redid it, he was right. It looked way better. You need that sort of feedback in your life. Miner’s as passionate about this thing as I am.” 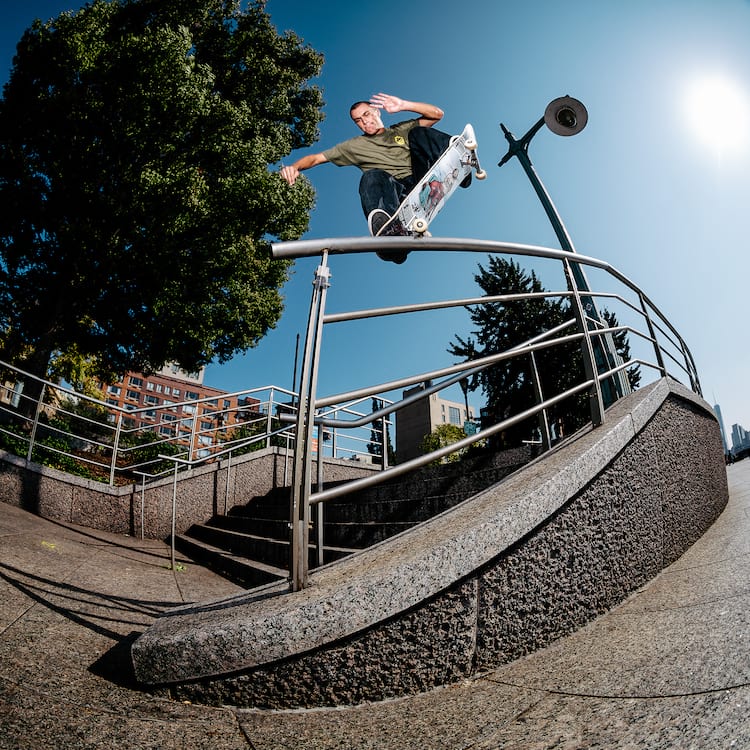 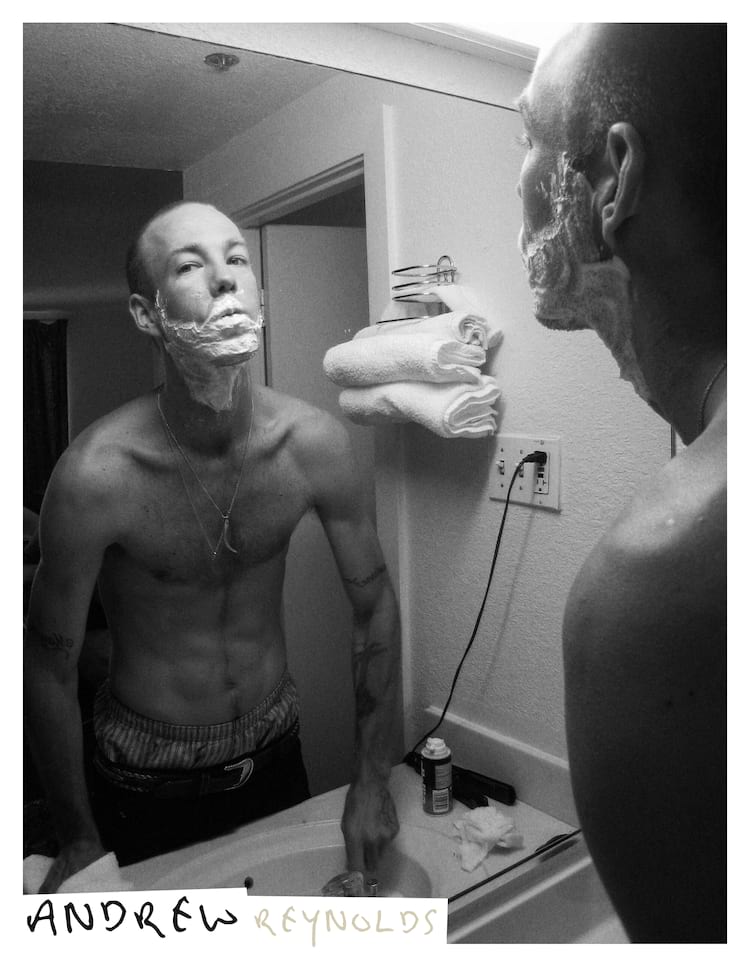 “My friend had a copy of Baker 3 and we’d watch it every day for years before we went skating. I can recite every piece of dialogue in that thing. I obsessed over Andrew Reynolds, not just because he’s an amazing skater, but I learned that he edited those videos, too. He has complete control over everything he creates. Baker 3 had such a good vibe for that time period. The stuff he included in that video, stuff most people would leave out probably, is what made it so real and amazing. It definitely shaped my view of what skateboarding is. It made me want to jump off everything. I heard about his little OCD ticks, like tapping the board three times, and wondered, Should I start tapping my board, too? I remember trying it out as a kid ‘cause I figured, Well, Reynolds does it. Couldn’t hurt. He’s still barely said anything to me, which I kind of like. I still get to feel like a little-kid fan around him.” 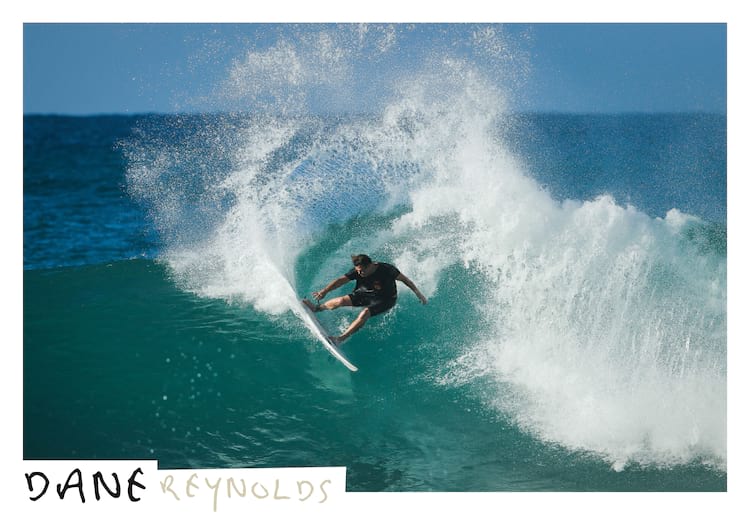 “I started surfing before I skated. I was still a little kid and making up my mind of which I liked more. Dane was in a video called First Chapter, which he directed himself and chose all the songs for. I loved the soundtrack and I was drawn to the way he surfed—like a blend of surfing and skating. It’s like he has no plan when he drops it, he just figures it out as he goes. So badass. People compare him to AVE all the time; he charges full force and leaves nothing behind. Plus, he was one of the first dudes to make a career off of surfing without doing the contests, which is what I want to do in skating. I’ve never liked contests and I suck at them. I’m glad I don’t have to do them. He showed me that if you get creative and make cool stuff, you can do it your way and not have to show up at contests or whatever to make it happen.” 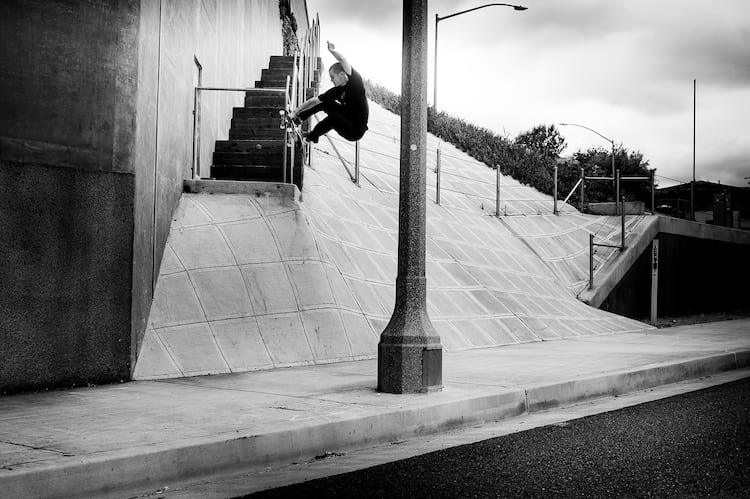 Tail bone dink, hitting the wave on the way to UCI     Photo: Burnett 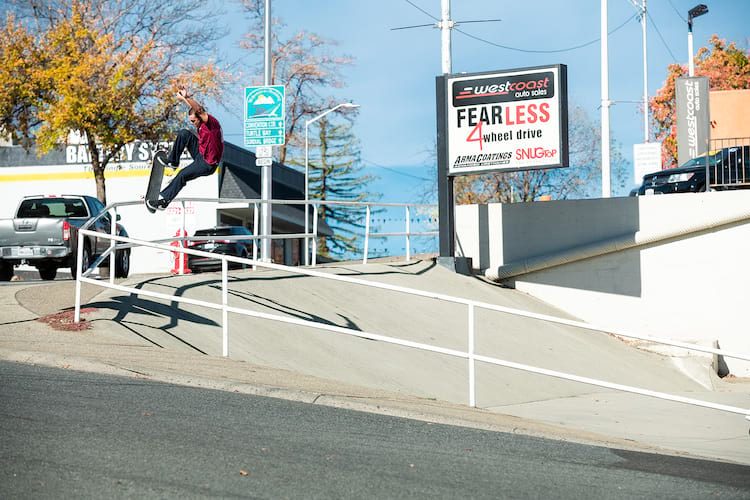 Friends—how many of us have them? Mason's got at least two     Photo: Brook

“My dad is a teacher and told me he had a sponsored skater in his class at his school in Hawthorne. Turns out it was Louie. I went to my dad’s school one day to meet him, and we’re still friends. At the time he had already been in Extremely Sorry and I was just getting my first shop sponsor, even though we’re the same age. I was just a little kid in a helmet, but he treated me like a friend from the beginning. Since then we’ve skated so much and pushed each other. He can do it all—transition, rails, ledges, flatbars. We feed off each other to try new things and not get stuck doing the same old stuff. He’s a good people person, too. Everyone likes Louie. You can learn a lot from how he carries himself and how he treats people. He’s really good at everything, except for staying awake. He can fall asleep anywhere, any time.” 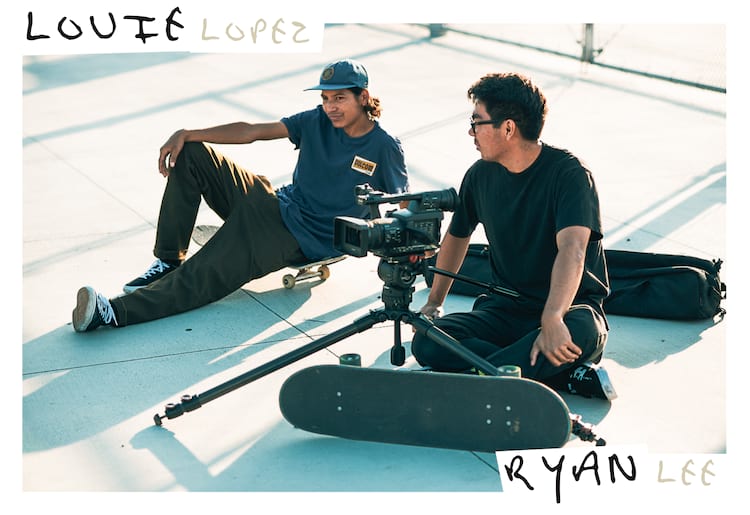 “I met him in middle school. He was a really quiet kid who was down to film any time, any day. He’s a legend. He’s probably out searching for spots right now. He doesn’t care, he’s ready to film, ready to find spots. All he wants is to get clips. He loves filming clips. He’s told me before that all he wants out of skating is to film his friends. He doesn’t care about getting a filming job if it doesn’t involve his friends. I think I owe 95% of my skate career to Ryan Lee. I should probably pay him some sort of royalty or something.” 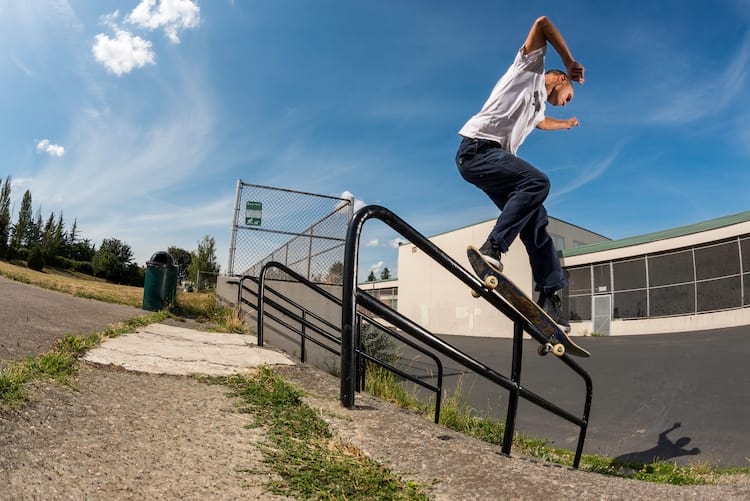 Mason back Smiths with a little help from his friends and his massive pop     Photo: Greengage 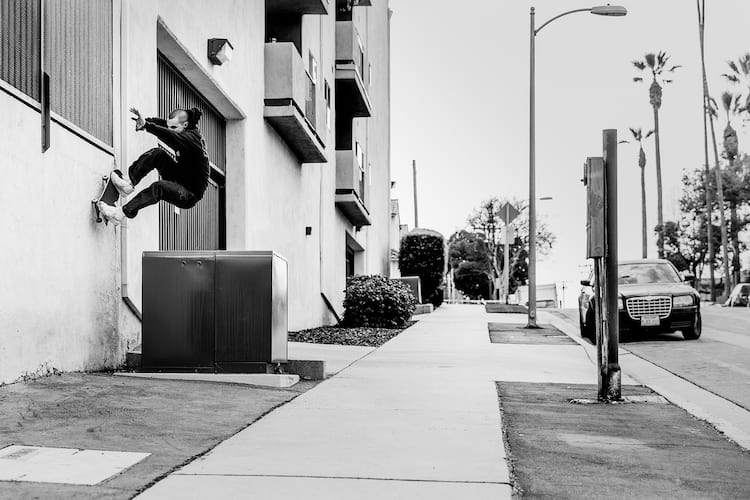 Over the box to no-handed wallride, Barbee approved     Photo: Strand 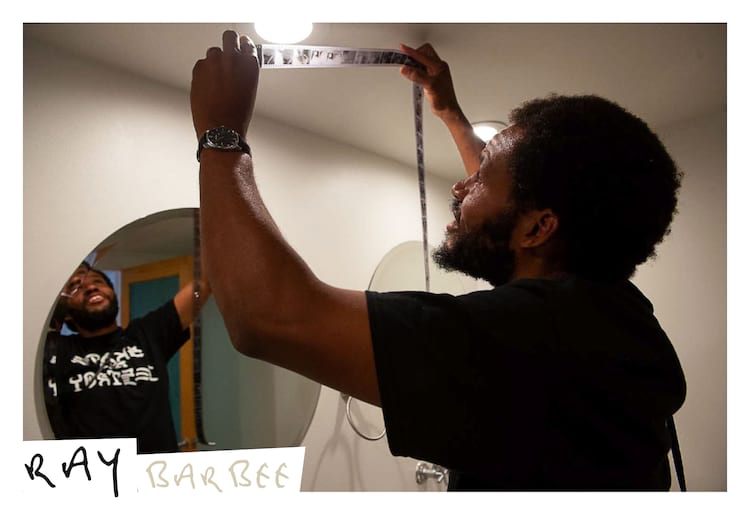 “Ray is the true definition of cool. There are lots of people who try to act cool but Ray actually is cool. He’s someone I strive to be like because he’s so positive and so creative. When I first met him he totally went out of his way to talk about photography with me, even coming over to my parents’ house to teach me how to process film. He told me everything he knew, completely open and honest. He’s definitely one of the reasons I got so sparked on photography and continue to do it. He’s so accomplished in so many things—skating, music, photography, but he’s the most down-to-Earth dude. I once saw him talk to a complete stranger on a plane for the entire flight, totally engaged in the conversation. He’s that type of person—open-minded and always positive.”

Heroic front tail up to switch crooks down. So heavy     Photo: Strand 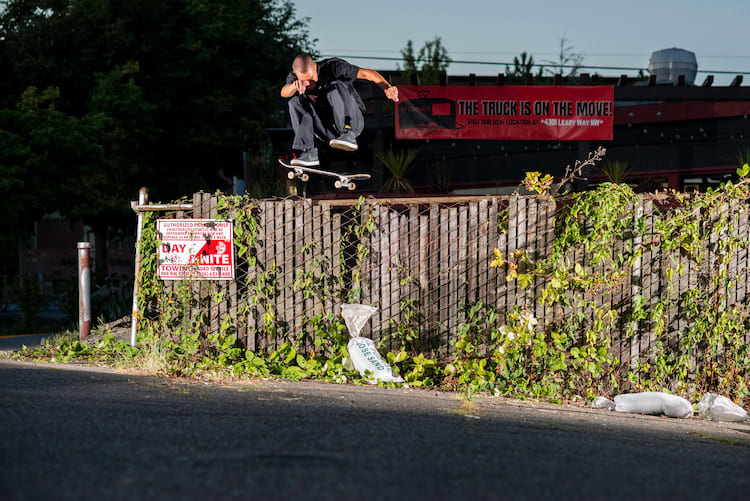 Mason is on the move, half Cab heelin' over the fence into the towaway zone     Photo: Greengage 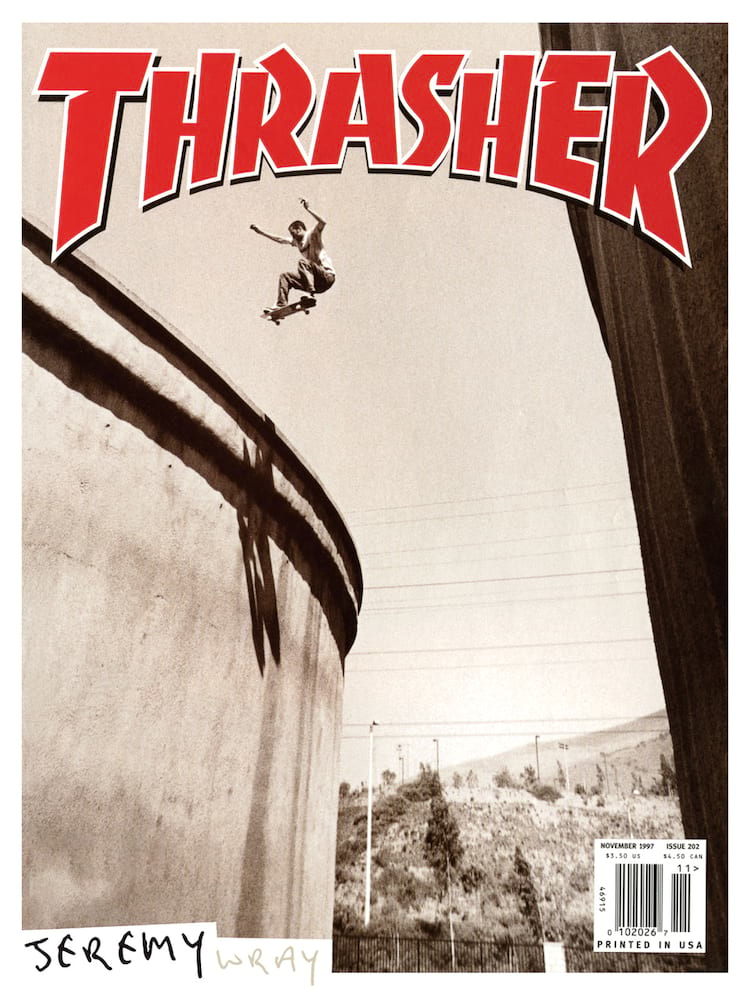 “That water tower ollie is all time. So insane. I love the way his feet never move when he skates. All I really wanted to do was frontside 360 like Jeremy Wray. I used to study his frontside 360 down the Santa Monica Triple set. Pure power and perfection.” 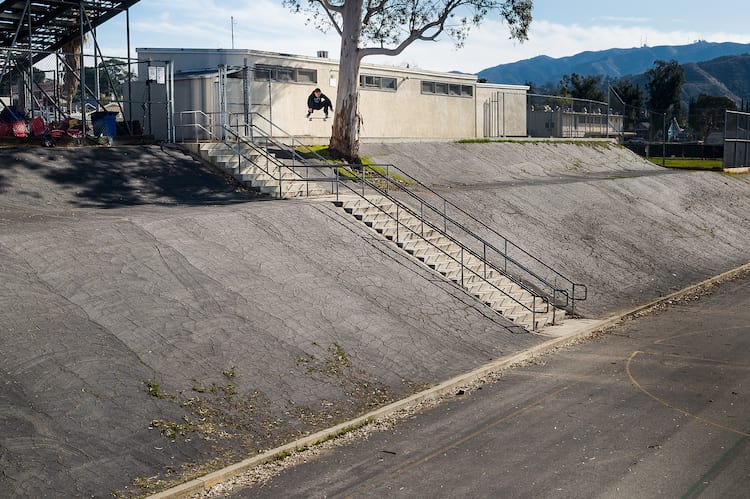 Just in case you thought the cover was mellow     Photo: Burnett 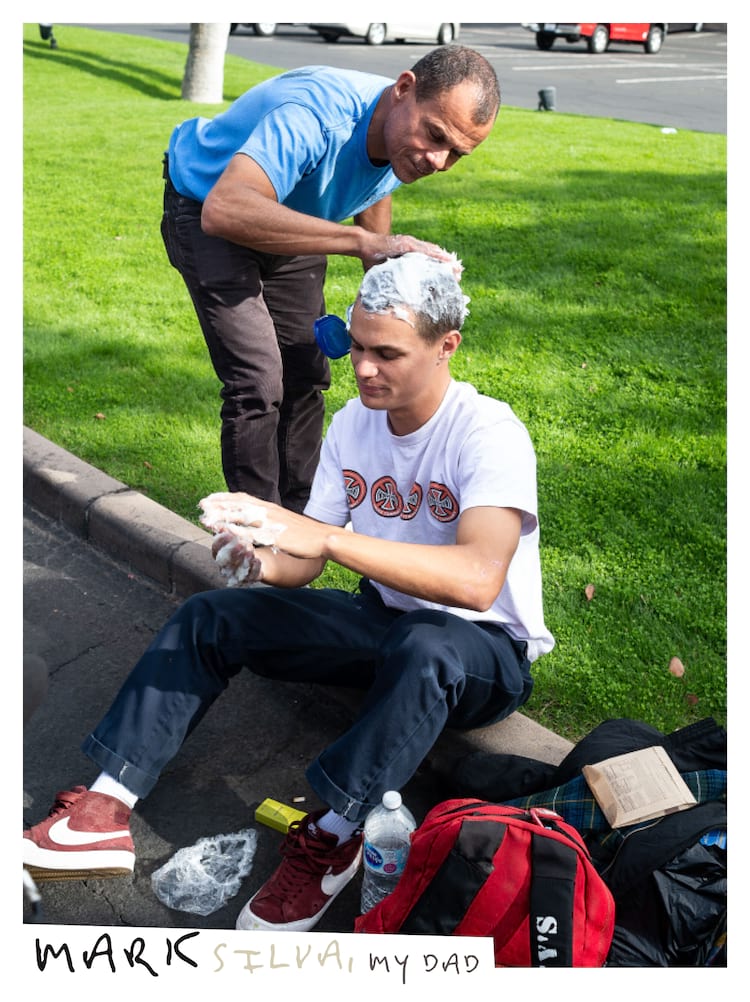 “Of course, it all comes back to my family. My dad, he’s the most active 57-year-old on the planet. I can never have an excuse for anything knowing that he gets up at 5:30 every morning to run and surf before going to work to teach all day. If I’m rolling out of bed at nine and don’t feel like doing anything I think of him. He surfed every day for four years straight! Think about that—when it was pouring rain, when he was sick, nothing stopped him. He runs marathons all the time. He’s insane. He ran one in two hours and thirty minutes. If that’s not inspiring I don’t know what is. He’s really hyped and he’s super supportive of me. Anything I’ve ever wanted to do, he’s helped make it happen. He even flew to Arizona to help us on King of the Road. He was stoked! He’s a teacher but he trusted me enough to leave school and do independent study so I could skate more. I’m sure ideally he’d want me to go straight to college, but he saw that I had that spark to pursue skating and he trusted me enough to give it a shot. Knowing I have his and my family’s support means so much to me.” 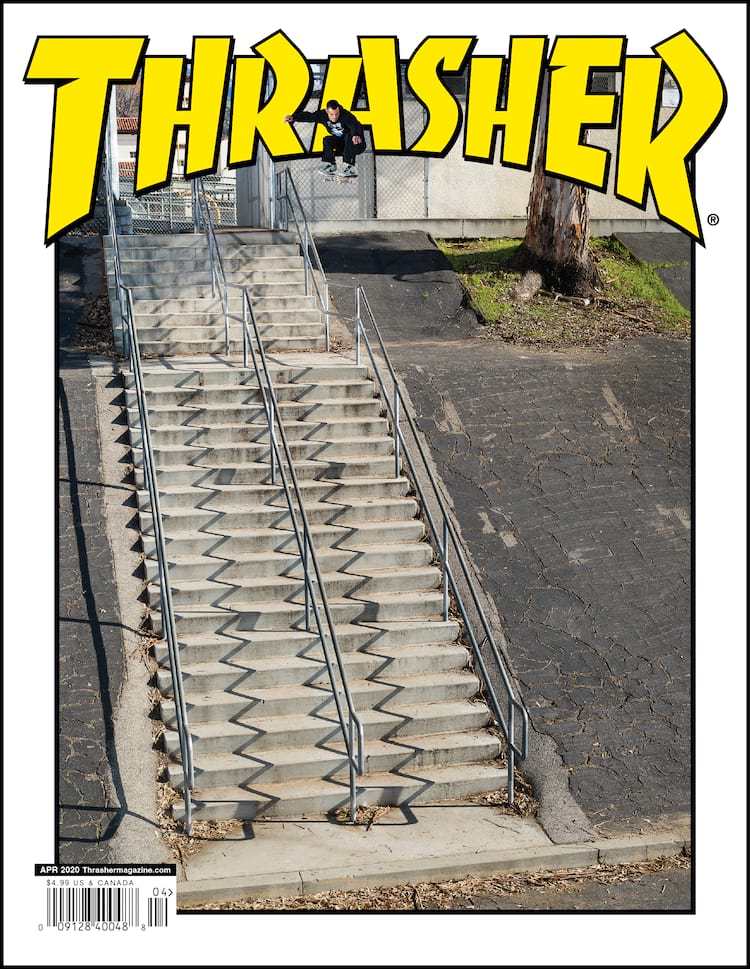 The inspiration's clear. Mason makes it to the front with a groundbreaking ollie     Photo: Burnett
© 1981–2023 High Speed Productions, Inc.