Indy's "Pedal to the Metal in the Pacific Northwest" Article 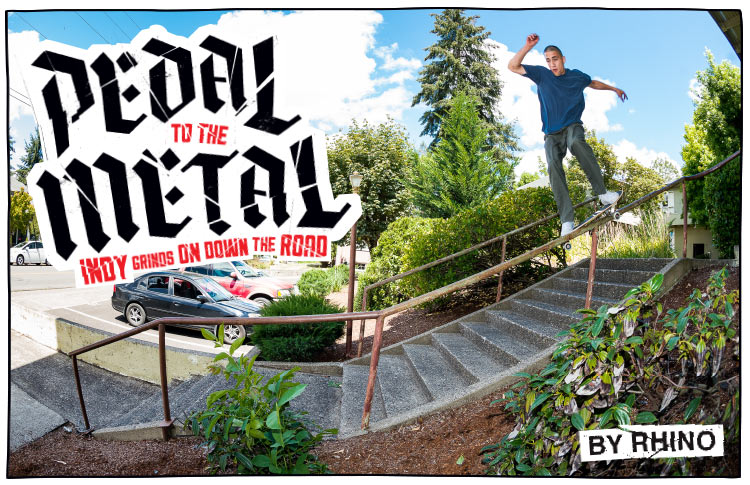 On the way up to Portland we got some info about a few handrails just south of Eugene. The first one we pulled up to was this kinked beauty and straight out of the van—no warm ups—Kirby backside 50-50d it and Erick Winkowski followed it up with this Smith grind on his ‘80s plank. Definitely not dorky

I’ve been doing the Indy TM duties for seven years now. With a stacked team of 200-plus riders including legends, pros, ams and flow bros, it’s hard to choose who’s going on the road. With contests every weekend and video parts demanded by board, shoe and clothing sponsors, it’s difficult to lock down travel dates with dudes. The formula is to start with one road dog, get the, “Fuck yeah. I’m in,” and then work around them and put together a crew that travels well together. Our mission was to do three separate trips and combine them into one article and a big video blowout. We hit Denver, the Pacific Northwest and the East Coast, DC to Boston. The cast of spot slayers consisted of Hewitt, Mountain, Raybourn, Kowalski, Russell, Chapman, Haslam, Kimbel, Worrest, Kirby, Winkowski, Gravette, Dickson, Witkin, Trujillo, Kremer, Drehobl, Baca and Zavala. That’s a heavy crew! 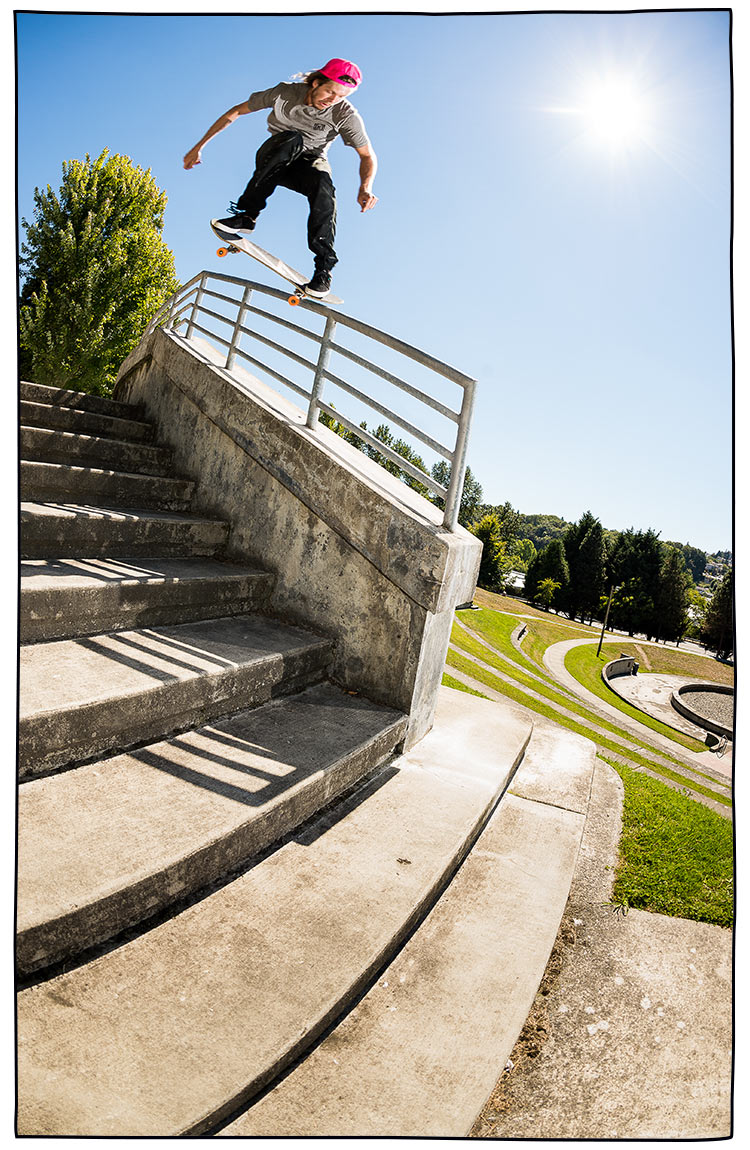 We met up with Nolan Johnson in Seattle and he wanted to take us to some random street spots. Why not? Could be an interesting mission. Taylor Kirby crooked grinds a high rail and clears a few bonus steps. Wait ‘til you see the roll away. Talk about a glory ride!

We flew into San Jose, hit the road north to Eugene for a day and then up to Portland. The Portland streets have a lot to offer and kept us busy. If you start getting too familiar with the city, hop on the 5 and beeline it to Seattle for some new stoke. Winkowski is no stranger to the area and brought us to Max’s indoor vert ramp. Nolan Johnson guided us around to some insane street terrain—Jimi Hendrix High is must! Three days in and some of the dudes had to fly out for other missions, but we got plenty of footage and photos in the seven days we were out there. The van was looking thin with only Bobby, Kirby and Dylan left, so we decided to cut the trip short and hit some spots on the way back south. A ten-day mission cut to seven—sometimes it’s nice to get home early. 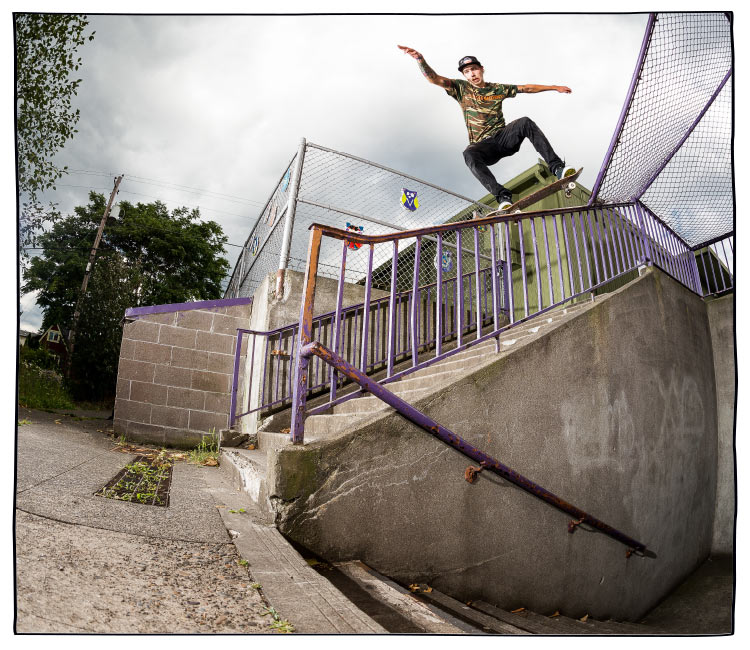 Gravette hopped in the van for a few days in Portland. We stopped at this school to check out a different spot and noticed this gap to rail that had apparently never been touched. After a little bondo on the run up it was good to go. Gravette, virgin flight gap to lip

Jon Dickson has been on a tear lately, front blunt shove for the love 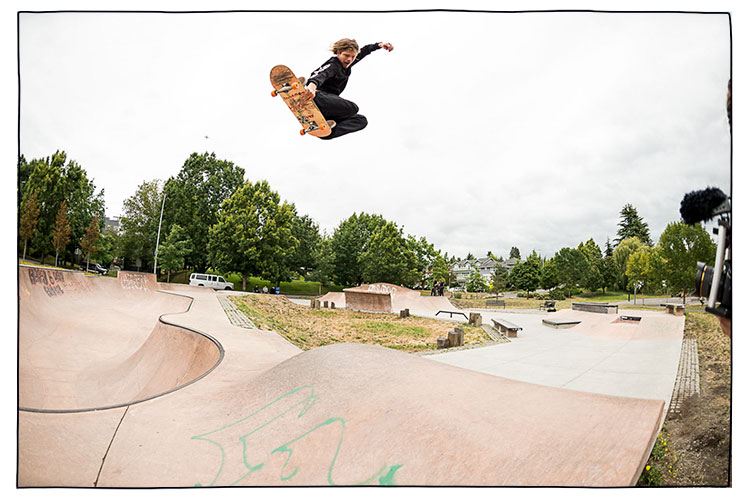 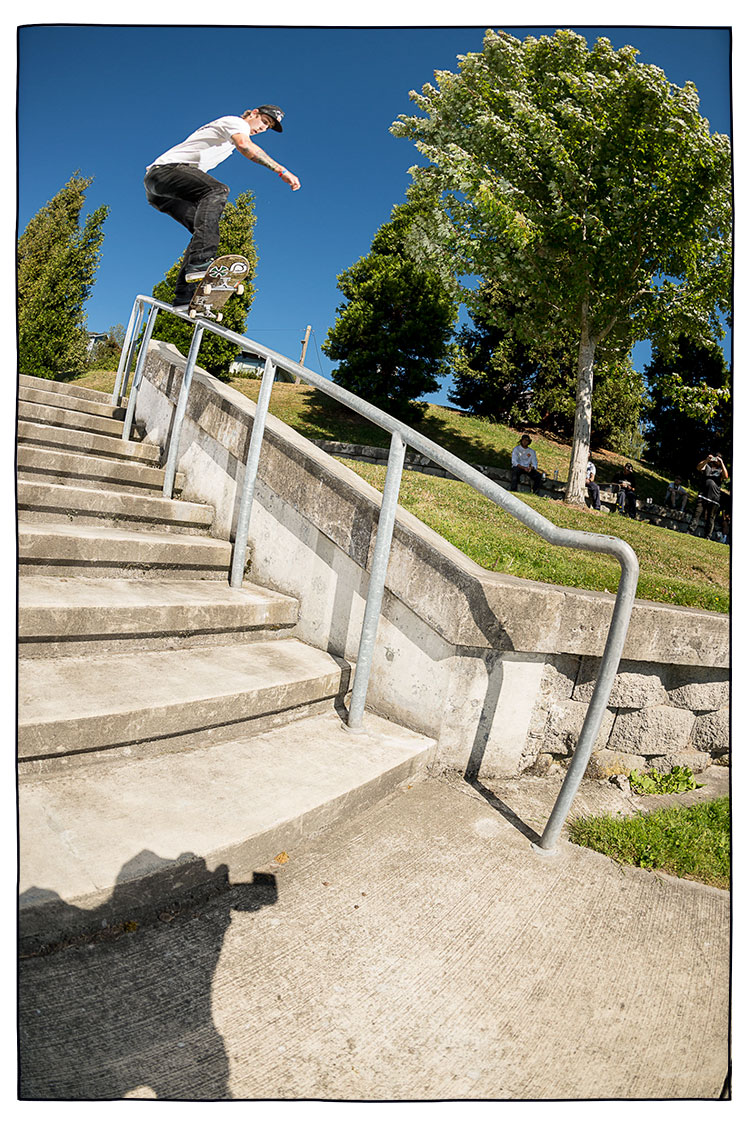 Gravette, 5-0. the best part is the roll away 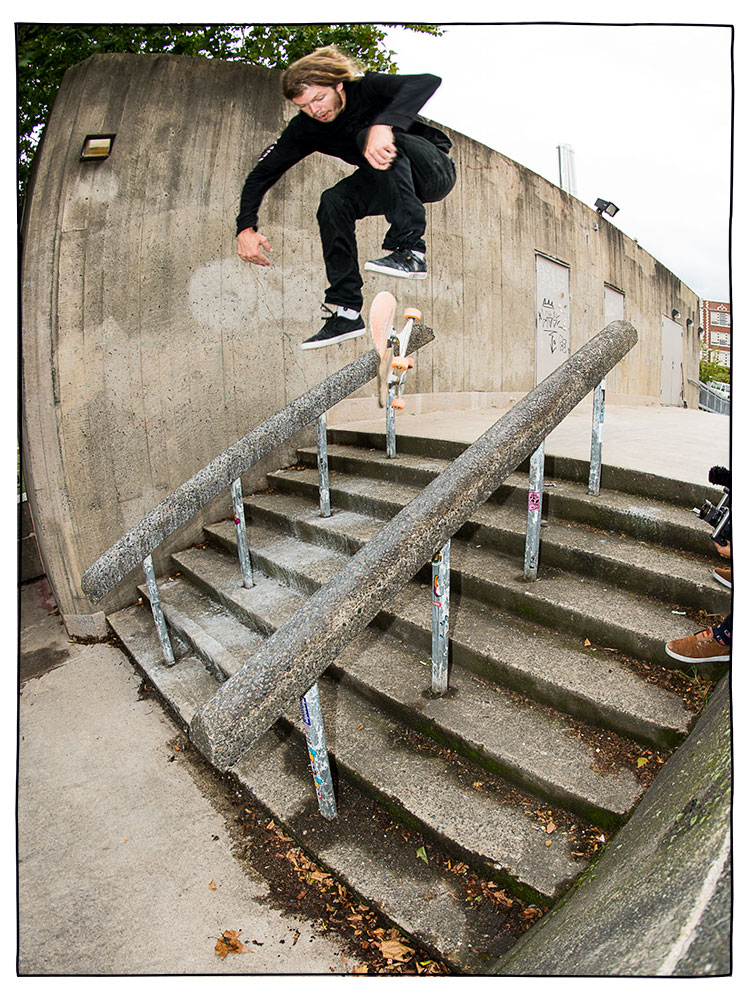 Are you experienced? Kirby is. Switch tré lipslide at Jimi Hendrix High 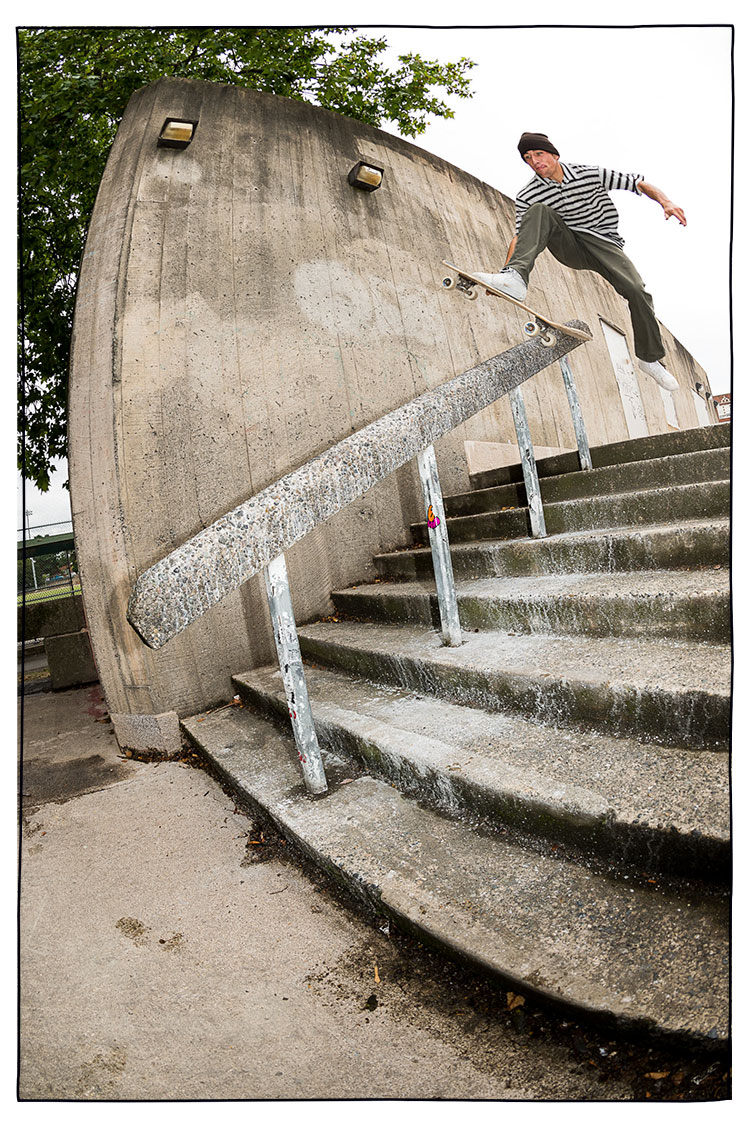 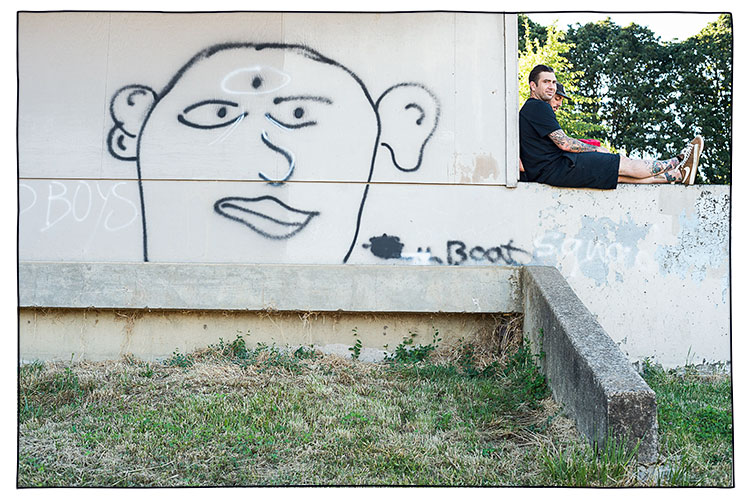 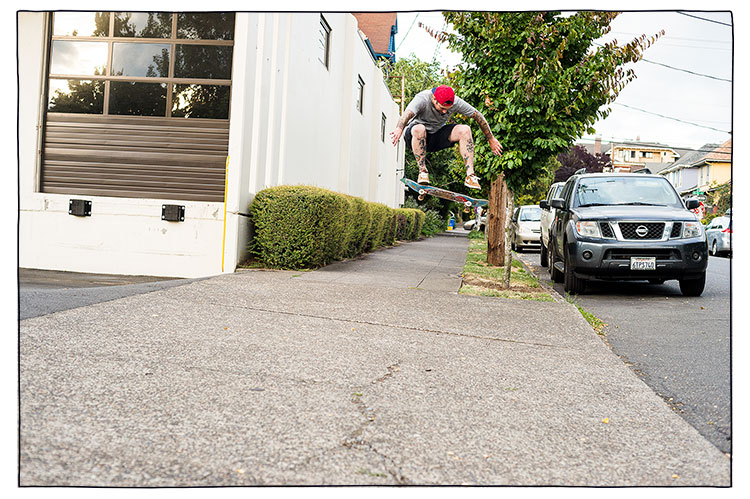 Bobby felt right at home on the rugged Portland spots. Switch flip to the street

You’ve been on Indy for awhile now. How did an East Coaster get on the team?
It has been awhile. Ten years? Lance Dawes put me on back then. He grew up near DC so I was on his radar.

You got any Indy tats?
No, but I have a tattoo from Eric Dressen.

You could squeeze one on there and you might not even notice it with all the other stuff you got going on.
I definitely have some leg room.

Favorite dudes on the two trips you went on?
Winkowski is pretty rad. He was on the Northwest leg of the trip. And of course Sammy Baca rules!

How would describe you Winkowski to someone who doesn’t know him?
Geez, I don’t know. Dude casually walks around on his hands on the deck of a half pipe. It’s fucked!

The first day you really didn’t know him and he just starts going at the kinked rail. What were your thoughts?
Ha! Yeah, I thought, “Who’s this dork with the old-school shape?” Then he Smith’d some fucked-up kink rail. End of story!

You have been keeping it chill with the alcohol lately. What’s the secret to that on skate trips?
I don’t know. Being drunk or hungover makes it that much harder for me to get anything done skate-wise. I’ll save it for a rainy day.

Do you find yourself more productive on trips?
As of lately, yes. When I’m home, if there’s downtime and time to just have fun skating,  I don’t mind drinking.

Are the podcasts at bedtime a new thing when you’re not drinking?
Yeah, I like listening to documentaries and whatnot before bed; it helps me sleep.  Like Morgan Freeman when he was doing the show about the universe.

More pancakes and less beer?
Fuck, pancakes rule for breakfast. Jason Jessee told me I can’t eat pancakes after the age of 30. Then he changed it to 31 after I told him I was 30.

I was going to drive the van back from the East Coast solo, then at the last minute you decided to go with me. What do you like about the road?
That was an awesome trip. And we picked up Jason Spivey in Baltimore, spur of the moment to go too. I just love the road, love seeing America. I love the American Heartland!

How many times have you trekked cross country on a bike or in a car?
I’ve already ridden my motorcycle to California and back this year. I’ve driven it many times in a car. Probably ten times on my motorcycle.

More miles and more miles, just got to keep it going, right?
This last time I rode to Phoenix for a night from LA. I wanted to see a buddy in Austin, TX, and the weather looked right so I continued on. From there, I knew Mardi Gras was happening in New Orleans, so I made my way there for the party and to see some tits. Then I figured, I’m basically two-thirds of the way back to Maryland. So the ride continued; it was awesome. I love seeing the scenery change. There’s no turning back once you’ve made the decision. You have to keep charging! 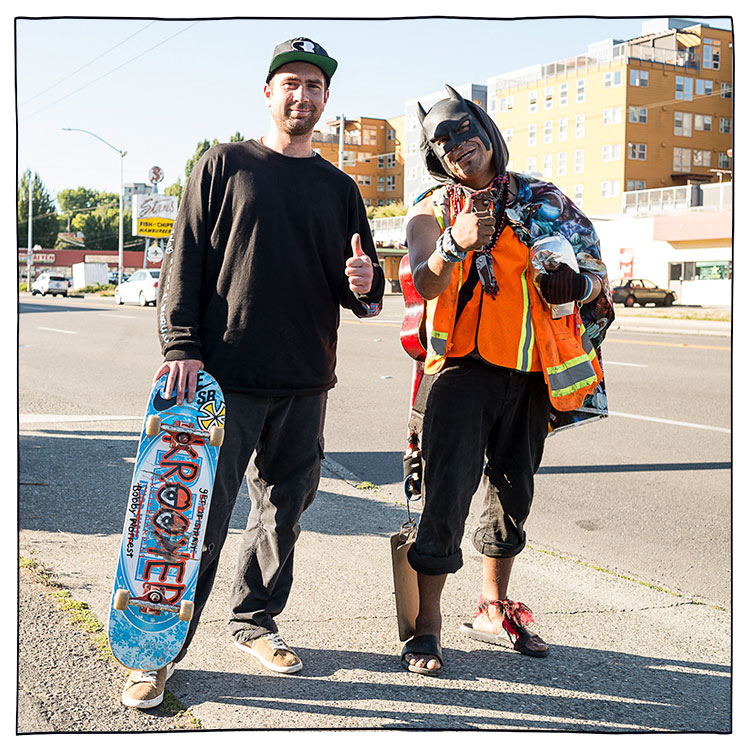 Seattle has some rad street characters. It wasn't even close to Halloween 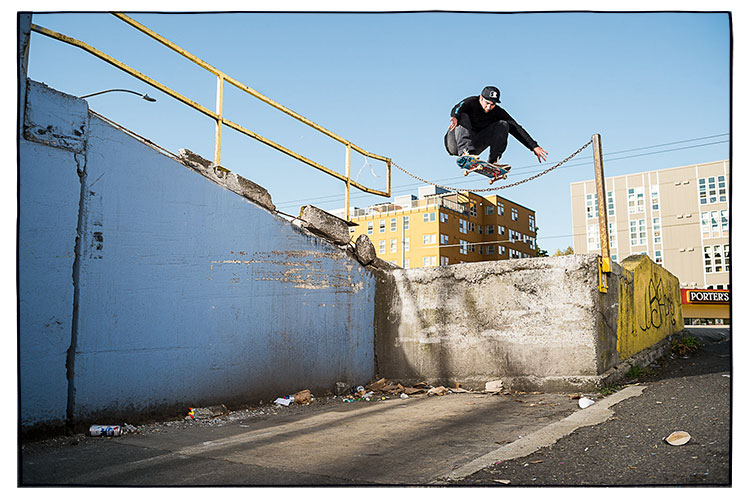 Bobby, up and over the chain 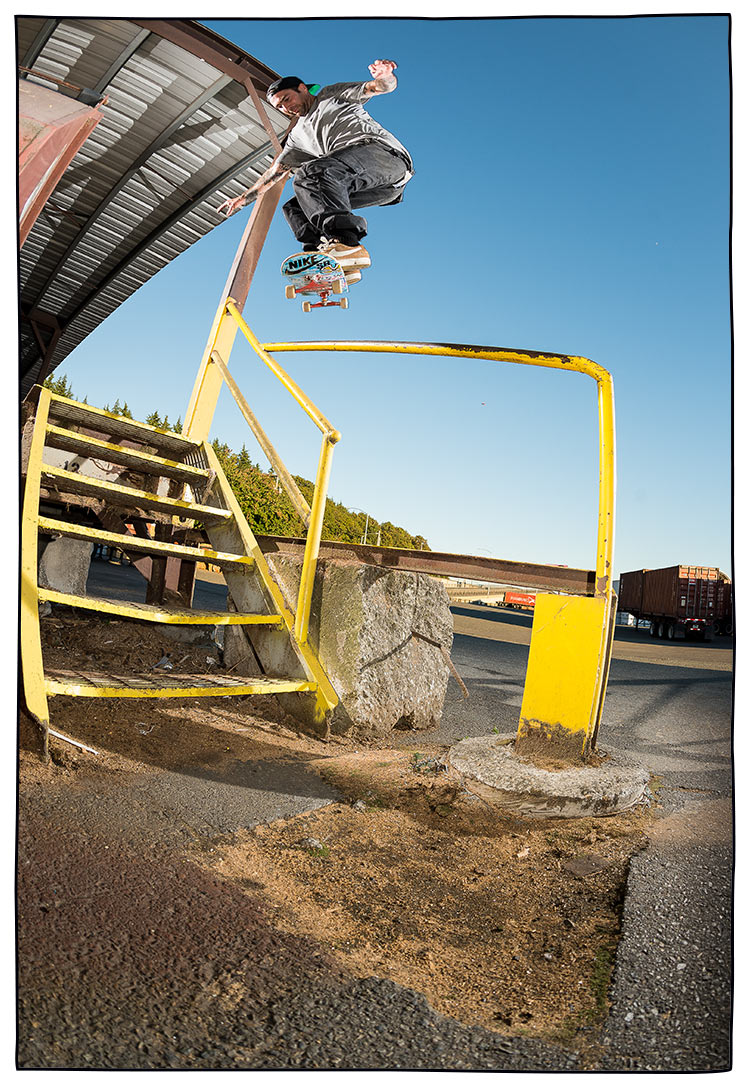 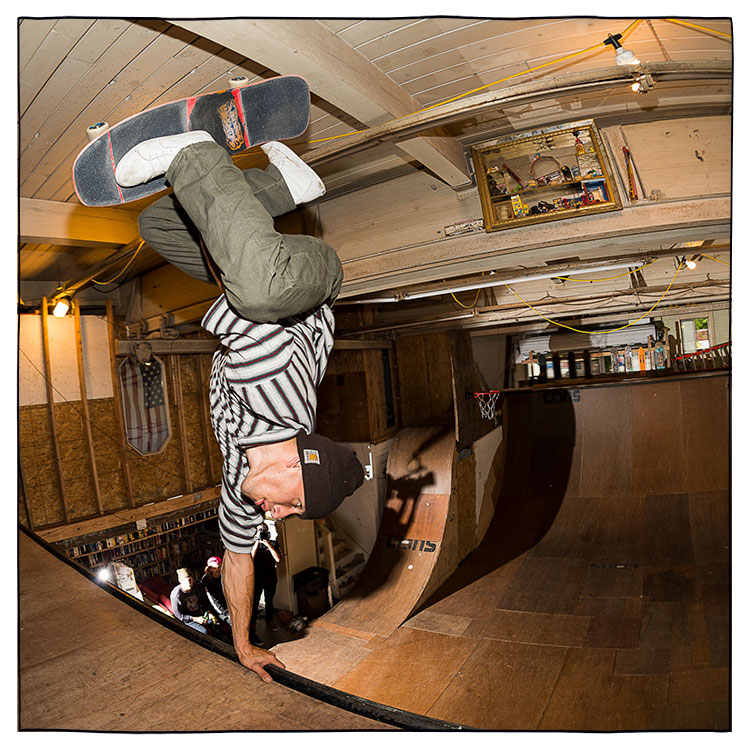 Winkowski twists a Smith Vert above his bedroom 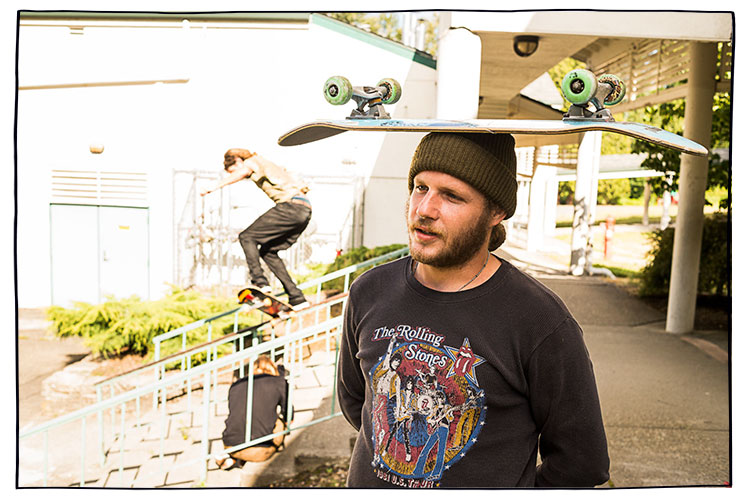 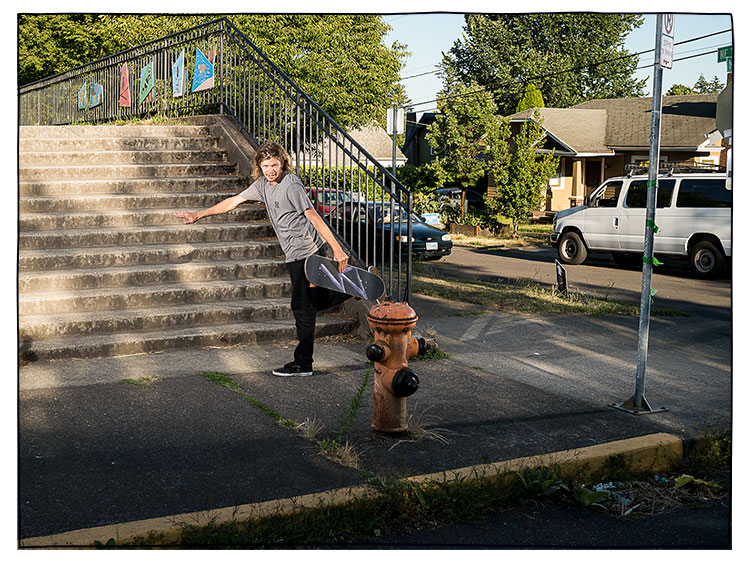 Kirby, little flatground warmup for a neck-high rail. You know the Dawg's gonna lift his leg at a hydrant 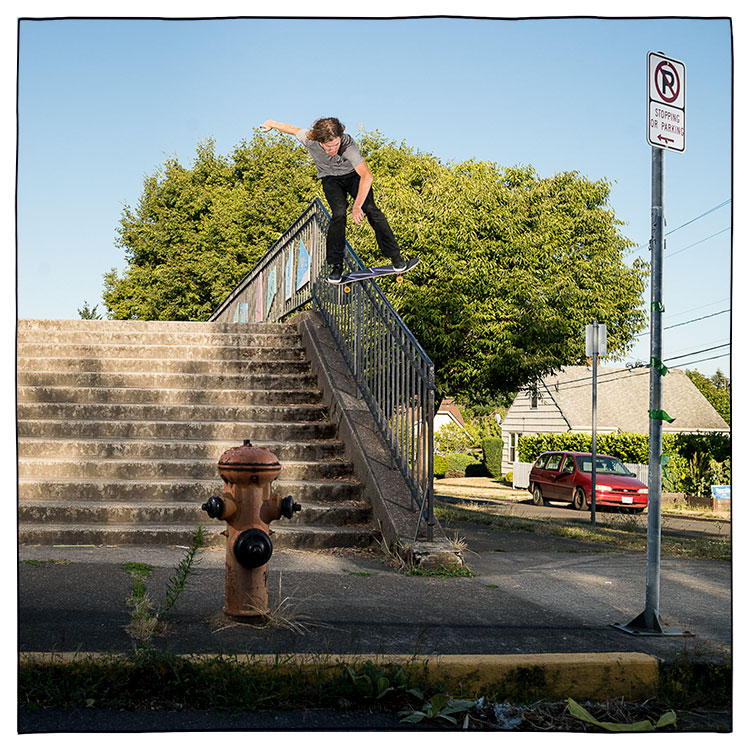 High risk factor for getting smoked, Kirby comes clean with a boardslide 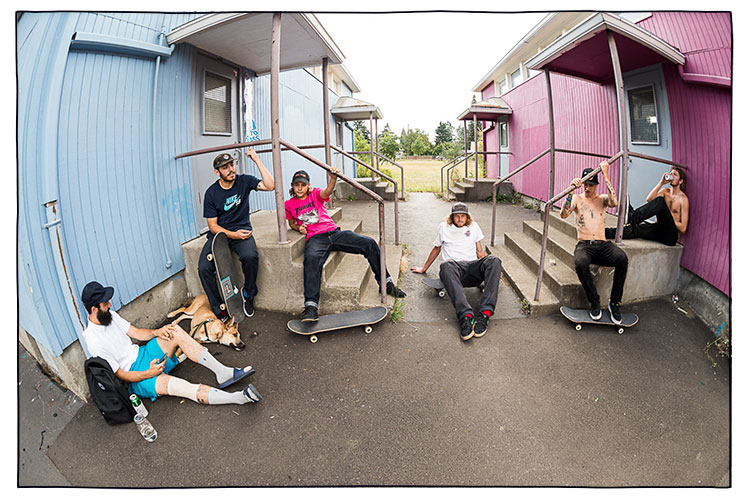 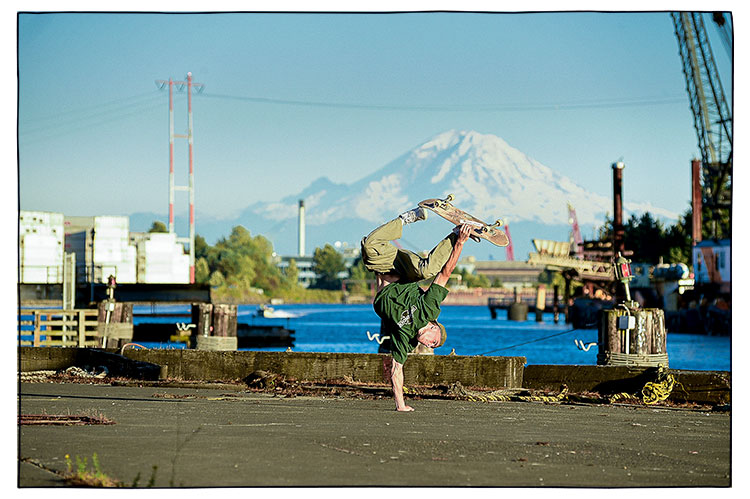 Winkowski, street plant with Mt. Shasta in the background. Tape your phone to your bedroom wall and let this one chill for a bit 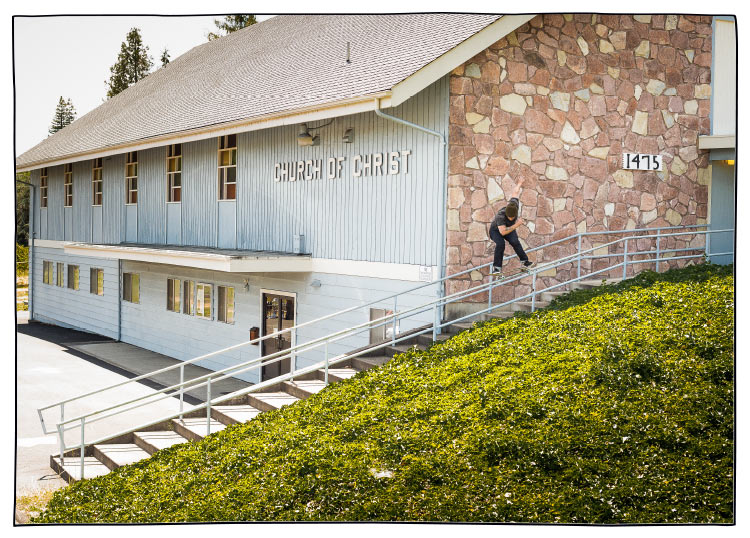 We initially got the boot but after some smooth talking, dropping Tony Hawk’s name and showing them the Indy Instagram, we got 20 minutes to get ’er done. This was the first day and second spot on the trip. Still no warm ups, Jon Dickson grinds his biggest rail to date. Check back next week for part two (of three) of the trip