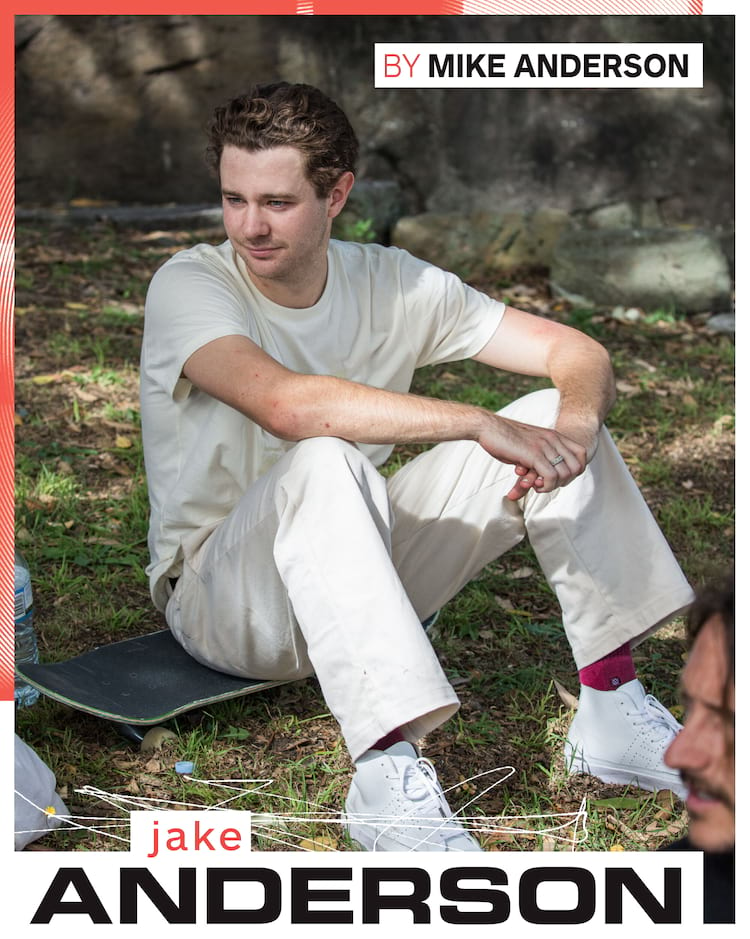 Nobody knows you like your own brother. Read on as Manderson interrogates little bro Jake in this interview from our February 2020 issue.

Let’s get the stats out of the way. What’s your name, how old are you?
Oh my God, dude. Jacob Lewis Anderson and I’m 23.

Were are you from?
Ventura, California. You’re from Santa Barbara. 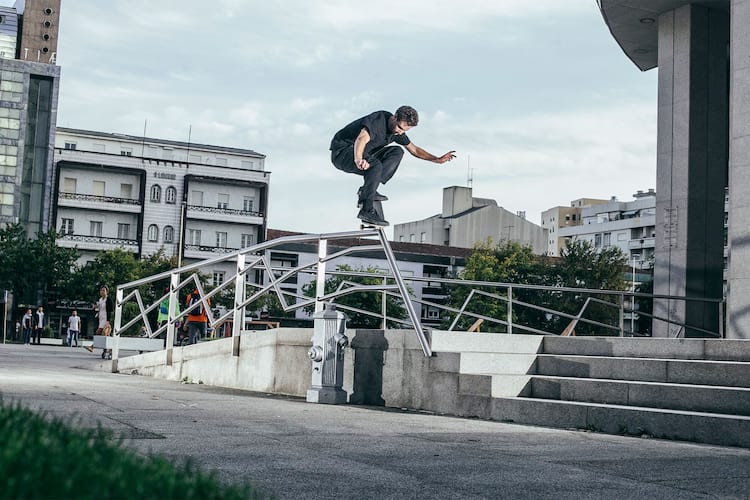 Pop and power runs in the family. Jake crooked grind on the hip-high bar     Photo: Mullins

You just got back from New York City with Yuto and hanging out with the Zoo York boys. Any good stories from that?
Okay, so the first day Yuto didn’t speak English and then within five days he spoke great English and all he did was cuss.

Perfect. Talking just like you with your griptape voice.
Exactly, ’cause he was with me.

Alright so what’s going on right now? You guys are on a trip?
I’m in La Paz, Mexico with Johnny Wilson, Cyrus Bennett and Dominic Travis. We’re at an Airbnb ’cause we’re at Scuba’s wedding.

Bunch of white dudes.
I flew out with no place to stay.

Classic.
Yeah, classic move. I had nowhere to stay so they picked me up. 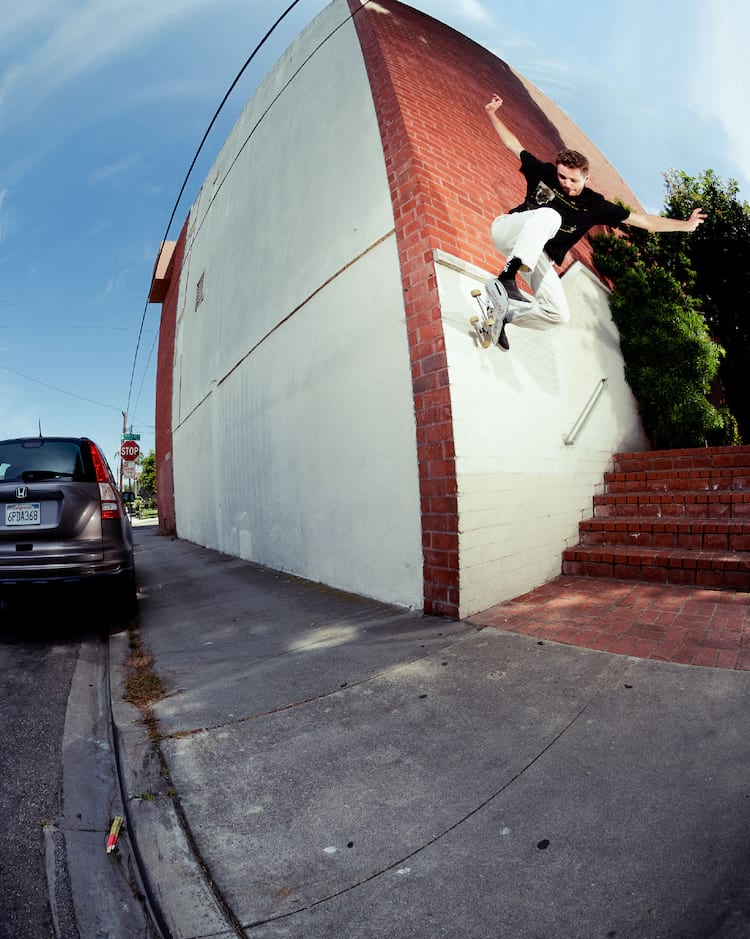 When your pants match the wall. Backside scrape to the street     Photo: Papke

Alright, Jake, so we gotta continue with these basic questions. What does a normal day in the life of Jake Anderson consist of? How many stops to Starbucks and how many Juul pods do you go through?
Okay, I do one Juul pod a day, hit Starbucks once a day and then I wait for people to show up at my house and that’s when I start getting ready to leave.

How many times do you hit Starbucks total in a day, though?
Dude, it’s slimmed down, actually. I used to hit it a lot but I’m on a budget ’cause I’ve got no sponsors. I make coffee at Mom and Dad’s house because it’s free.

How much rent do you pay at their house?
I gotta rip the Juul before that answer. I don’t pay anything, but I had a girlfriend and I paid rent for her.

Dude, that’s crazy. Alright Brian De La Torre wants to ask you something.
Where is DeLa?

He’s fried. He’s doing Ayahuasca right now. He’s with a shaman in New Jersey. He flew out from Brazil to go to New Jersey. But he wants me to ask you about your guys’ time in Copenhagen.
So me and DeLa were at the Christiania bowl and there’s literally 20 of us on mushrooms and it was my first time. We were watching Matt Gottwig skate the bowl and it was literally the funniest fuckin’ thing ever because he was doing a kickturn on the vert wall, like the tiniest kickturn on the vert wall and me and DeLa would start dying laughing at that and he would start trying to nollie backside flip into the quarter pipe and we would fucking lose it. I would start laughing and then DeLa would start laughing really hard. I would hear him laughing really hard and I would laugh harder and so we had this sort of weird effect of laughs going on. 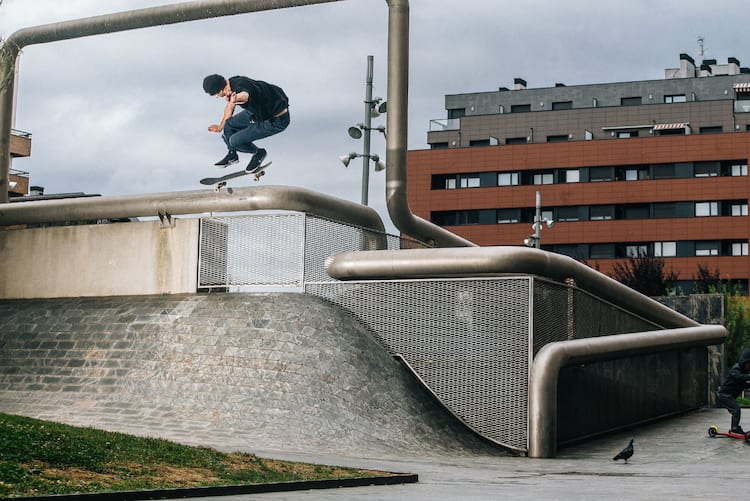 Alright, on the topic of drugs, how come you cried and freaked out and lied when me and Daisy called you out for smoking weed when you were a kid?
Wow, what? I don’t even remember that.

It was in LA. When I lived in LA you were over and we heard that you were smoking weed and we called you out like, “We heard you’re smoking weed,” and you started crying and freaking out and threw a fit.
Dude, I swear to God I don’t even remember that. 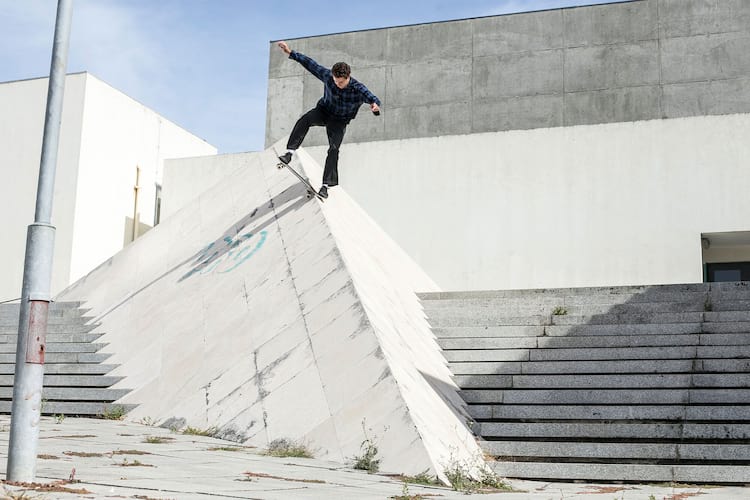 Somewhere between a hubba and a handrail, Jake burns up a different kinda blunt     Photo: Mullins

They’re no longer Daisy Dukes, they’ve become Jakey Dukes. The old Jakey Dukes on the back of a hog.
That happened the other day when I arrived in La Paz.

Alright, Jake, so when you were five years old you were pretty fuckin’ savage—Kool-Aid mustache, Hot Cheeto mustache, yelling at grown-up strangers, swearing at them. I remember you calling this one dude, just going up to this one fucker, his name was Dan, and you said, “Fuck you, motherfucker!” You were seriously five.
Yeah, it was bad.

Do you think that sparked your griptape voice? Or did you just choke on a Hot Cheeto?
It’s a combination of both, actually.

Or maybe it was when you Superman’d off the trampoline straight to your teeth. Could that have caused your griptape voice?
I don’t remember that but you do.

Or maybe it was from when I had to drag your ass around when I was a kid and you were in diapers. When you were out skating with us getting diaper shreds all over the grip tape. Maybe that’s what caused your griptape voice?
Well, that actually kind of resonates. Yeah, those kind of go hand in hand. I mean, I don’t fuckin’ remember but you do. I tore my diapers up with the griptape because you were pushing me down the driveway. You created all this, dude. This is your fault, man.

Nah, it was Mom and Dad’s fault. So you’re a pretty athletic dude; you’re definitely the athlete of the family; you’re the jock.
Yeah, you wrote something in high school about me.

I did?
Yeah, about me being talented and natural at things.

I mean, yeah. You’re one of those guys. Shocker.
I’m basically a jock.

So why did you end up skating? You should have ended up as a fuckin’ actual sports athlete, an actual jock.
Well, I tried skateboarding because I was kind of born into it and then I tried baseball. I played for two years and then I made all stars. Then I wanted to play football and you were like, “No, you can’t skateboard then. You have to practice five days a week.” So I was like, That sucks, I’m not doing that. Then I did all stars and I was like, Holy shit. It went from three months of baseball into like four-and-a-half months. Then all the kids I played baseball with I would try to hang out with them but I had nothing to relate to them because all I knew was skateboarding. I had nothing to relate to those fuckers with. So I was like, Fuck it, dude, I guess I’m a skateboarder. And that was what solidified that I am a skateboarder and I’m not a wannabe jock anymore. This is what it is; this is it.

And none of the guys were as good looking as Curren.
And I have a hot-ass best friend.

On the topic of that, you and Curren have been inseparable since you were little tykes. You got any good Curren stories that he would love for you to share?
There was one time when we were playing Call of Duty. It’s a live game so you can’t pause it. So we were playing and he’s like, “Dude, I gotta take a shit,” and I was like, “Dude, shit out the window.” And he’s like, “I’ll do it if you do it.” ’Cause he had a window right next to his fuckin’ TV. So he goes and leans out the window and starts taking a shit as he’s playing Call of Duty. He actually took a shit. And then I took a shit on top of his shit. We were so young and we ended up laughing and told his mom and she made us pick it up. And then I ended up being the only one to pick it up. Because it’s not my mom, it’s Curren’s mom. I’m the shit-cleaner of the relationship. 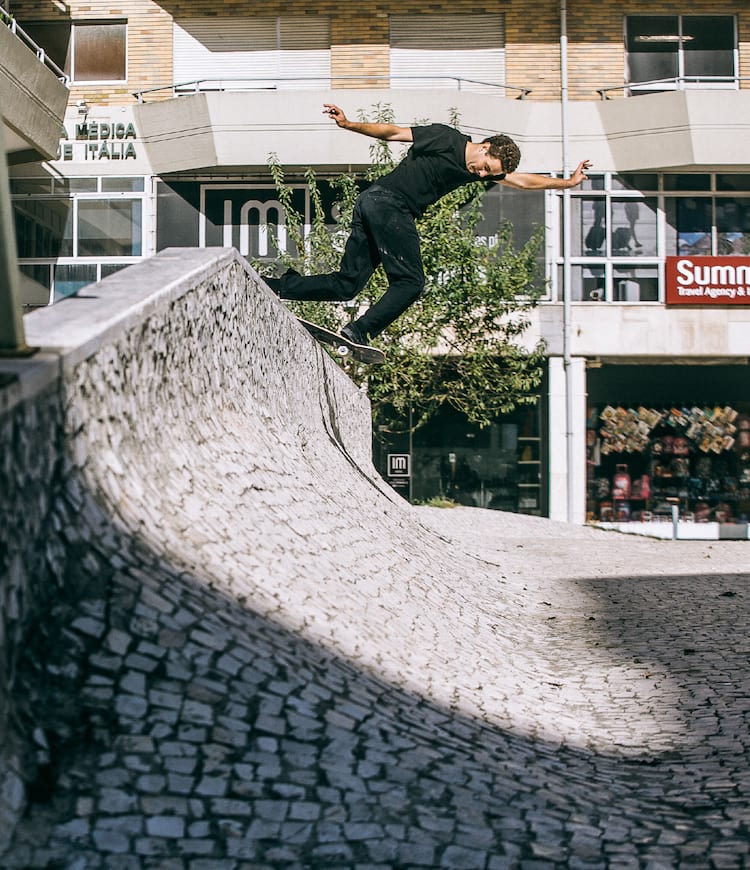 Back lip on a wave of cobblestone and Cheeto dust     Photo: Mullins

You also grew up with a couple of other celebrities.
Yeah, Louie Lopez. I’m looking at him right now.

What flavor pods are you on?
I’m on fucking menthol. I love mint. But I can’t find mint anymore because they banned the mint pods.

You got mint written all over you.
I know, I’m a minter.

So, Jake, there’s a couple cool things about you, actually. When you were younger you used to sleepwalk and piss all over the place. You’d piss off the stair railing or occasionally walk into my room and start pissing. I got kinda screwed ’cause I just wet the bed. Do you still do some cool sleepwalking and pissing these days?
I was in Switzerland and I wingmanned my friend Fledge. I went back to the hotel by myself and I wake up and I’m like, Holy fuck, there’s a puddle right here. I don’t know what’s going on. So the next day, I didn’t even think about it, I grabbed socks, I was so fucking hungover and I smell my stuff and I had pissed in my suitcase and all over the floor. That happened. And then recently I pissed my own bed.

Is that a deep down thing you need to address?
Deep down, dude, I just want to be everybody else.

That’s real shit, Jake. I really appreciate that. So where does all your pop come from? It’s kind of fucked up.
My grandpa played the trombone and he was tall.

Sick. I thought you were gonna come up with something funny to say but that sucked.
What the fuck else am I supposed to come up with? I don’t fuckin’ know. 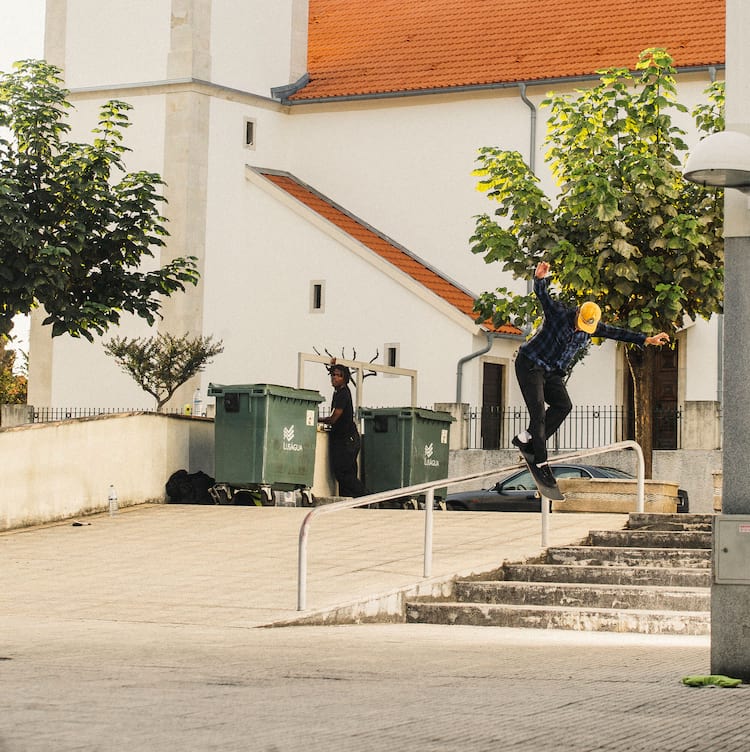 Properly dipped Smith. You can't tell here, but he also back 180s out—watch the video for proof    Photo: Mullins

So, Jake, you surf with Dane Reynolds a lot, a world-renowned, awesome surfer. How come he doesn’t do Bertlemanns?
That is a really good question. Because it’s like the cliché thing. A surfer doesn’t wanna portray a surf vibe on a skateboard just like we wouldn’t want to portray a skate vibe on a surfboard. Those last few questions really sucked, Mike. Can we just get a question to end this shitty-ass interview? Actually, I got a question: why won’t my brother let me ride for any of the companies he rides for?

Because look at this interview. It just doesn’t work, dude. I don’t got shit, dude. I’m over this. I’m not cut out for this bullshit.
We really knocked it out of the park.