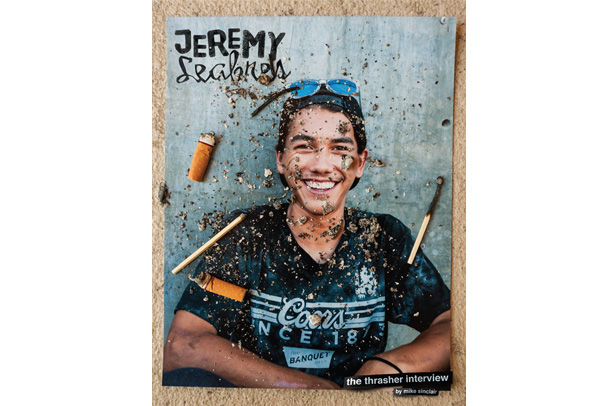 You have never gambled in your life. You think it’s dumb. One day a friend convinces you after lots of harassment to spend one quarter on a slot machine. You drop the coin into the slot with a clunk and yank down on the handle, sending the wheels into a blurry spin. Clonk, clonk, clonk—each dial stops in a row and each one is the same. Holy crap! Ten-million-dollar jackpot on your first pull. Jeremy Leabres is that good. The evidence is on these pages and on video. —Ed Templeton

How many people think you are Mexican?
About 90 percent.

You’ve got so much drive compared to most of the guys I have worked with. Where does all of your drive to do so much on your own come from?
I’m just having fun. It comes easy when you are just having fun and skating with your bros.

What about the drive to be a chain smoker?
Oh, there is no drive there; that just happens.

Menthol or roll your own?
Roll my own menthol, I suppose.

When do you think your teeth will be completely fucked from all that smoking?
I heard you are good up till around 25. 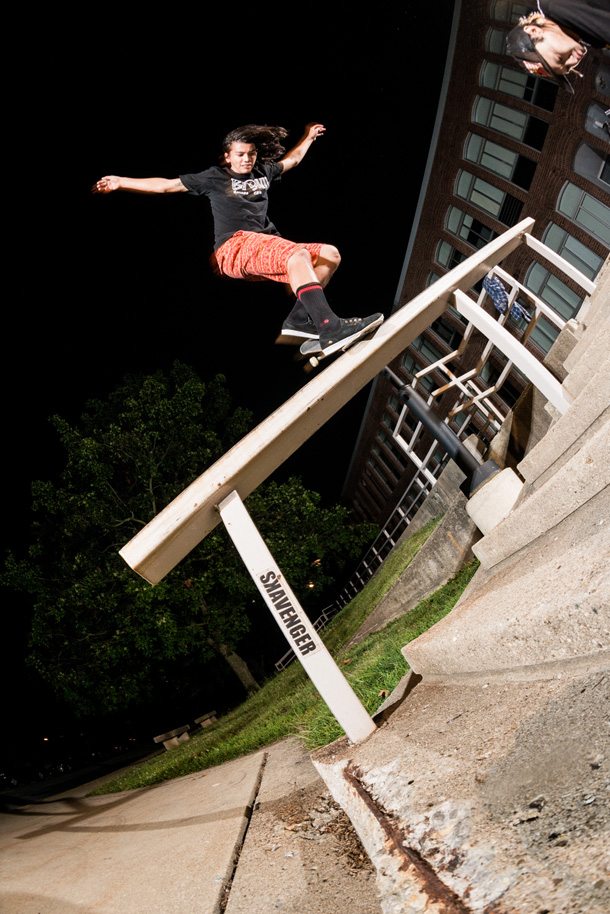 Shaking off the dust with a classic BS NBS in Indiana. Photo: Hammeke

Have you heard that J-Lay claims skating is all downhill after you turn 22?
Yeah, I heard about that and I think it’s bullshit.

How old are you now?
Twenty.

Are you into health food like Blake is?
Nah, Blake takes that shit to new levels. It’s annoying.

So Blake’s health-food diet pisses you off ?
It doesn’t really piss me off. It’s just annoying when he can’t go with the flow and eat where everyone else it eating.

What’s your take on health-conscious smokers?
What do you mean?

You know—the kind of fools that have to eat real good, like Blake, but will smoke and drink all day. And then they’ll have a burger at 2am but refuse to eat one for lunch or dinner?
That’s just Blake not knowing what he wants. Like I said, it’s annoying.

If you could punch anyone in the face today, who would it be?
Nick Merlino.

Nick would kick your ass, though, don’t you think?
Yeah, but I would like to punch him in the face. 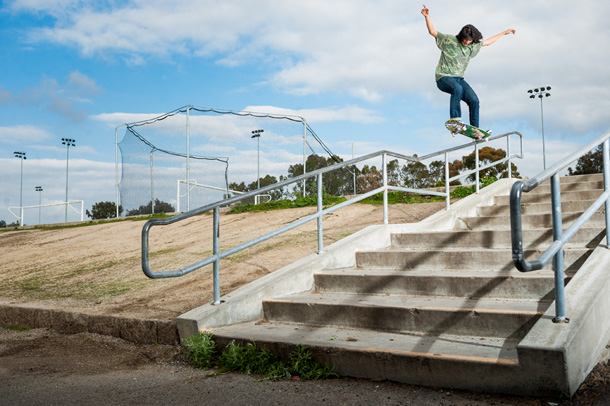 Spain conquered the Philippines, thus you get Asian-y looking dudes with Mexican names 5-0 grinding through kinks in America. Photo: Rhino

You are too nice. How could you punch Nick?
I wouldn’t do it just to do it. I’d wait till he did something really stupid. Just hang out with him for a day and he would ask for it.

You grew up with Forrest Edwards, right?
Yeah, pretty much. I’ve know him for days.

Has he taken you out with any of that Real Street money?
Fuck no. He needs it. He’s actually doing really good with it—better than I thought he would do with it.

What’s he doing with it?
Trying to get a car but he doesn’t have a license yet.

What’s something people don’t know about Forrest that they should?
He loves to suck women’s toes.

Toes before bros?
Nah, he’s down for the bros.

Would you let Ed paint you and Forrest nude together?
I’d be down but Forrest would not be down.

Are you still throwing trash out of car windows and leaving your shit everywhere for people to pick up after you?
Oh, nah. Just a little here and there. It’s not too bad anymore. I used to be bad about it. I used to clean out an entire car and leave it on the ground. It was pretty bad at one point. I used to not give a shit or even think about it.

Why did you change?
I don’t know. Just trying to not be a little shitty kid anymore, I guess.

Is your mom still in law enforcement?
Yeah, she just started working again.

Did she have a leave of absence?
She just had foot surgery and before that she had heart surgery where a little piece gets put into your chest to shock your heart if you miss a beat or something like that. She is going back to work now, so she’s chilling. She’s hyped to be going back to work, for sure.

Does your mom ever bust anyone for skating?
Nah, she gives skaters a break. She don’t hassle skaters at all.

Has she seen how bad you used to litter?
No. She would be bummed on me.

What do your parents think about your skateboarding? Were they always supportive?
They were super supportive. They are super hyped on where I am, but they worry about me a little.

What are they worried about?
Once I stopped going to school, they were worried.

What grade did you drop out?
Senior year.

How much time did you have left?
It was towards the beginning of 12th grade and I didn’t have enough credits to pass. I didn’t want to do 12th grade again, so I just left. 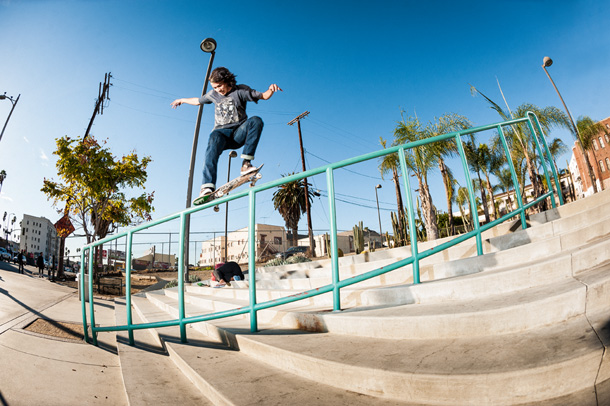 He may have dropped out of high school, but Leabres held this frontside crooked grind until the bitter end. Photo: Rhino

What was your best subject in school?
School sucks. School is the worst thing ever.

What was the first thing you remember about Toy Machine? When did you first see the brand?
Probably the Suffer the Joy video. That was my intro to Toy Machine.

What stood out to you in Suffer the Joy the most?
Billy, Nick Trapasso and the way the video was put together was super rad to me.

Name three riders, besides Ed, from the first Toy Machine video.
What was it, Jump Off A Building? Or was it Welcome To Hell? I don’t even know. Bam?

Nope.
I couldn’t tell you.

Who are three Toy Machine legends?
Nick Trapasso—just the way he skated. Billy for sure. He’s the gnarliest motherfucker. And Bennett since he’s one of a kind.

If you could put one ex-Toy rider back on the team, who would you pick?
Austin Stephens. He’s tight. I’ve been on a few RVCA trips with him and he’s really cool.

How did you get hooked up with Toy Machine?
Billy sent you my tape.

And then what?
Then I got declined and kept skating. Then Billy sent you my next tape and you were down.

Yeah, your second tape was insane!
Thanks!

You’ve got a lead foot; you break boards daily. What the fuck?
Yeah, sorry. I just got shit for asking for too many boards this month from Tum Yeto.

How many boards did you go through?
Probably around 15.

And you broke them all?
Pretty much.

Are you worried that you’re gonna get fat?
It definitely worries me.

What do you think is gonna make you fat?
I eat like shit and drink a lot of beer. 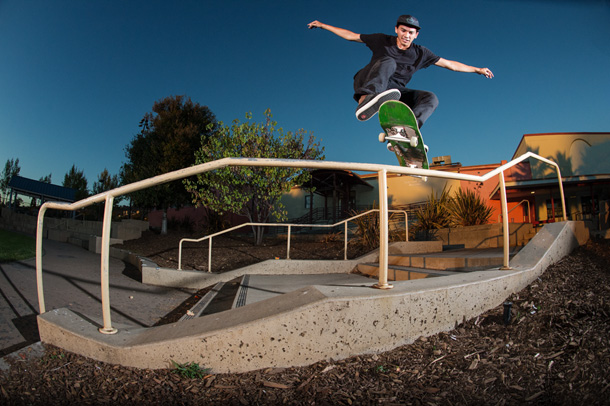 Well he wore a hat and he had a job and he kickflipped into frontside board slides so that… no one knew. Photo: Zaslavsky

Well, I guess you are just going to have to get used to Blake’s lame health-food diet.
I guess.

Your first time traveling with the Toy Machine team was on KOTR. What were your best and worst memories from that tour?
The worst part was the harsh hours. The best was meeting all the bros for the first time.

You took Billy’s spot on KOTR. Why couldn’t Billy go?
His kid was due any day so I got to go!

Did you travel much before you got sponsored?
Nah, not really. Only got to go to SF once before I got on the team.

You just got off an Emerica tour. How was that?
That was sick. Such a fun one. Nashville, Louisville and Cincinnati are all places I had never been. So fun!

What’s your favorite thing about being on the road?
Just seeing all the new spots and hanging out with bros. The whole time is pretty much the best part of any trip.

Who do you bunk with on Toy trips?
Mostly Blake.

What do you think about Tum Yeto bringing in Habitat?
I think it’s tight! Habitat has a sick team.

Who is your favorite skater right now?
James Hardy


This frontside half cab kickflip is so good, makes you want to punch Merlino in the face. Sequence: Rhino

How about your all time favorite?
Heath and Ed; it’s a tie.

What’s your favorite video?
Stay Gold, for sure.

Are you excited for the Made 2 video?
Oh, fuck yeah. I heard everyone is nailing it for that one.

Do you ever watch any old skate videos?
Once in a while we get some going: Sorry, WTF and Cataclysmic Abyss.

Do you keep up with all the daily Internet videos?
Yeah, it’s good to keep up.

If you could have any non-skate sponsor in the world, what would you pick?
Coors Banquet, please.

What kind of music have you been listening to lately?
A lot of Sabbath and a lot of Slayer. Devo has been getting me sparked lately, too.

I fuckin’ hate Devo.
Why.

It annoys me like Nick Merlino annoys you.
Bummer.

What’s the closest you’ve ever come to dying?
One time when I was a kid, I almost drowned in a pool. I remember it perfectly; it was so scary. One of my friends was on a little pool float, but he didn’t know how to swim. He fell off and he jumped on me to stay up above the water. He kept pushing me down to keep himself up. It was so scary. I thought I was dying for sure. I saw black and white. I think death comes right after that.


Front blunt through the kink ‘cause gapping past it would be too easy. Sequence: Rhino

Are you scared to swim now?
Nah, not at all.

What if Merlino did that to you?
Oh my God. I don’t know. I would do the world a favor and drown him.

What age did you lose your virginity?
Sixteen.

Was it in the Tum Yeto van?
No.

Who lost theirs in the Yeto van?
Dakota, I think.

Remember a few years ago—Dakota was giving you pointers on how to respond to girls to make them want you more. How did that work out for you?
Nah, not too much. It was tight, though. I got a chick now, so no more fooling around on Instagram.

Does she skate?
Nah, nah, nah.

So what’s next for Jeremy Leabres?
Right now I’m working on a solo Toy Machine part that will be on the Thrasher site. After that, we’re working on a full-length Toy video, so that’s what I’ll be filming for. Hopefully that will be out in two years.

Any thanks or shout outs?
Thanks to my parents, Billy, Santana park, Don Luong, Brian Hunter, you, all my sponsors and America!