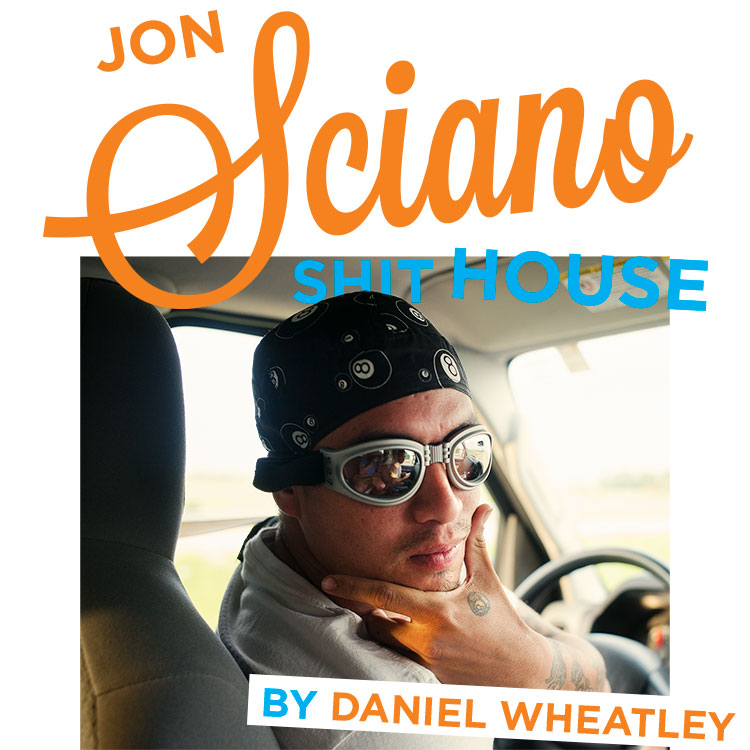 What’s been going on, Jon?
Nothing. Just got off work.

So a year or so ago you moved into a house on a pretty hectic corner in Los Angeles. What do you guys call it?
People call it the Shit House.

Who came up with that?
I’m not sure. I heard it floating around somewhere. I remember the first time I heard it I was, like, “Wait—what did you call it?” They called it that because me and everybody would just get shitfaced here. Everybody still does. 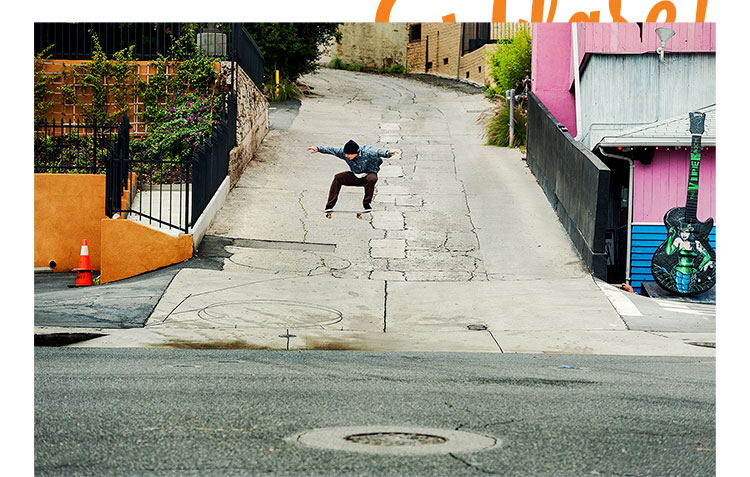 Any idea why it’s called Shit House? Wasn’t there a better name you could have made stick?
We called it the Gas Station House, Alvarado House—I don’t know. I don’t really give a shit. It’s funny to me.

You put in a lot of work on the house, though, right?
Oh yeah. It was, like, a crack house when I moved in. The living room was split down the middle with wooden crates to make another bedroom. Sheets hanging up to make walls. I took all that shit out.

Give us the list of tenants at Shit House over the years. It has some skate history, right?
Well, before I moved in I know Skate Talk Bob lived here. Him and Heath and them used to party here. Then Matt Gottwig lived here. Then I moved in. Since then we’ve had James Capps and Rye Beres. Now we have Cody Green and Aidan Mackey. 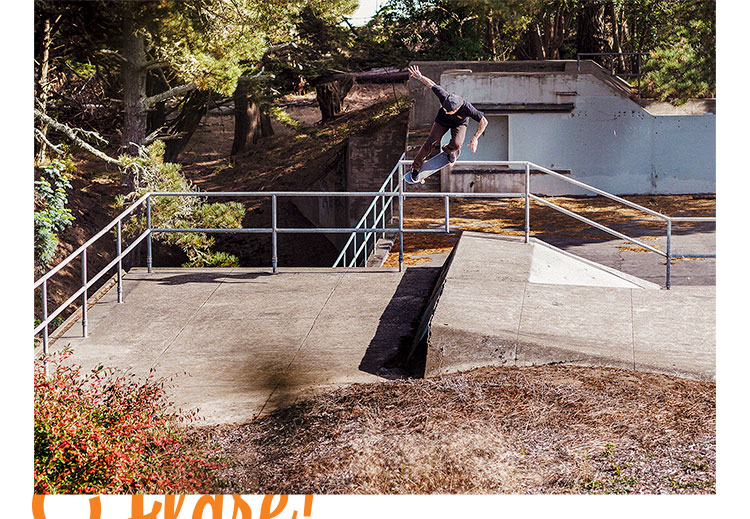 How many Lakai team members have stayed there over the years?
Manchild, Yonnie, Stevie, Capps, Vincent, Riley. Pretty much everybody under 28 years old.

So pretty much the whole Lakai team has stayed there. Who’s been the best roommate and who’s been the worst?
James Capps was a very clean roommate, and Cody Green is my best friend, so he’s my favorite. Rye was 19 when he moved in and he was the worst. I just had to teach him everything. He wasn’t terrible, honestly. Aidan is awesome too.

Who is a better grill master, you or Cody Green?
Cody took me under his wing at first, but I think I’m better than him now.

What’s the sketchiest thing that’s ever happened at the house?
The sketchiest thing that ever happened would probably be either the gas station next door to us catching on fire or some dude that, while we were partying here, was walking by on the sidewalk and he asked if he could join us for a beer. We’re all, “Yeah! Fuck it!” Next thing we know he’s trying to sell us meth.

Who’s been the best guest at the house, and who’s been the sketchiest?
Our buddy Bag is the best. He’s a friend of Aidan and I and he just rules. The sketchiest was an AirBnb guest of ours who we think stole Rye’s camera off the counter, then left all his shit here.

Gnarly. Are you guys still running Shit House as an AirBnb?
Fuck no. That was just when we were hurting for a minute and we would rent out our rooms. People would show up, like, “You gotta be fucking kidding me.” There would still be five people hanging out from the party the night before. The AirBnb guests think they’re getting a sick place to stay, but really there’s stains all over the carpet and shit. 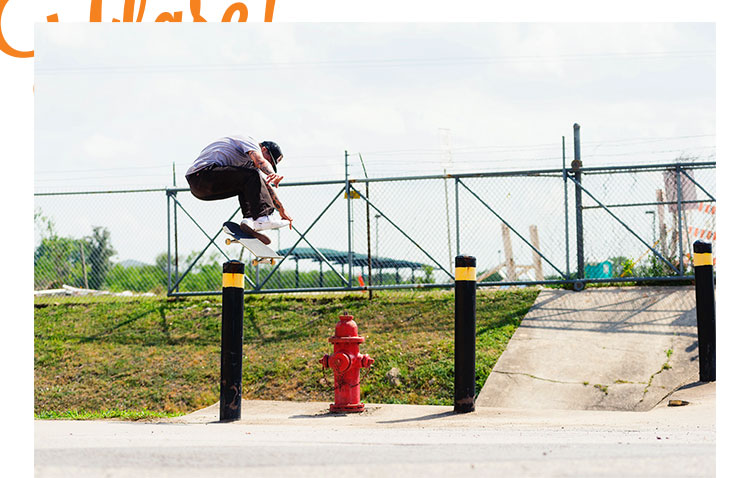 The AirBnb guests have no idea they just got to Shit House.
They had no idea. We got some gnarly ratings on there.

Is it ever hard to maintain sobriety in a living situation like that?
Not for me. I can’t be without my friends; I want to be around people. Everyone’s having a good time. There’s no drama. I’m really just kickin’ it with my buddies same as usual. It’s sicker when I don’t gotta pitch in for the beer run.

I remember when Simon Bannerot was living with you guys for a minute, he called me freaking out because a pipe burst in the kitchen and you weren’t home. He said some homies downstairs helped him shut off the water. So there’s people living under you guys?
Yeah, there’s people that live underneath our kitchen, not the whole house. There’s, like, a back house I think too. I don’t know the logistics of the whole thing and I don’t ask questions. But I heard that it’s a safe house for illegal immigrants. I think that’s why they don’t complain when we have parties until four in the morning.

Damn, straight People Under The Stairs. So while you guys are just living it up, they’re underneath everyone, like, “What the fuck?”
Dude, I remember when we first got the pool table we were tripping out because that was around when we really started having a lot of people over. Then we just sort of forgot about the whole situation. Then we had some crazy party until 6am, just me and Cody tackling each other in the living room and shit, and not one person complained. 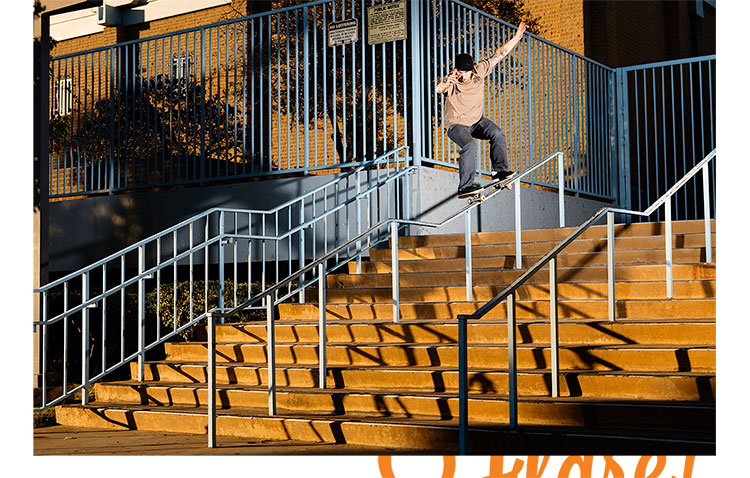 Wow.
Yeah, we even share a gas bill with them.

Right now I’m trying to find a venue for The Flare. Should we just say fuck it and premiere the video at Shit House?
Yes, dude! That would be the best situation.

Any hopes of moving out of Shit House in the future, or are you trying to run it as long as you can?
For my situation right now, I‘m going to run it into the ground. I just got a puppy so the house is good for it. The carpets all stained so she’s just having a field day in there. We got a yard for her. I’m chilling. It’s cheap and the location is good. No complaints.

What’s going on after the video?
Keep the sober tip going and try and film a part for whoever wants one. Just looking forward to skating how I want instead of skating fucked-up shit because it’s the end of a big video.