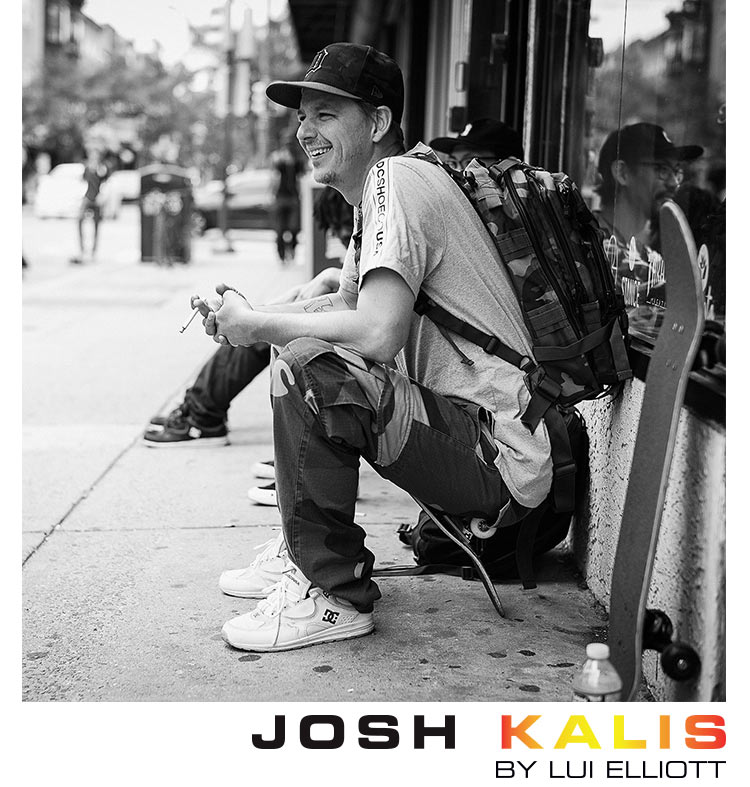 What was the vibe like, growing up and skating on the East Coast?
It was full of life. There was so much urban hip-hop and street skating that were both taking off at the same time, so they were very intertwined. There were a Mobb Deep-kind-of-side to things. The squads of kids had a very Mobb Deep squad mentality. East Coast hip-hop and skateboarding went very hand in hand, everything was very urban, in the city, grimy— it was very aesthetically pleasing. It was cool. It was sick. We didn’t have cell phones back then and there wasn’t very much landline calling to see who was going out. You just went to Love and whoever was there was there. It was almost the same thing every day. You just went. If it was summertime, you’d usually go after three, four, five o’clock because it was too hot. You knew everyone was there. 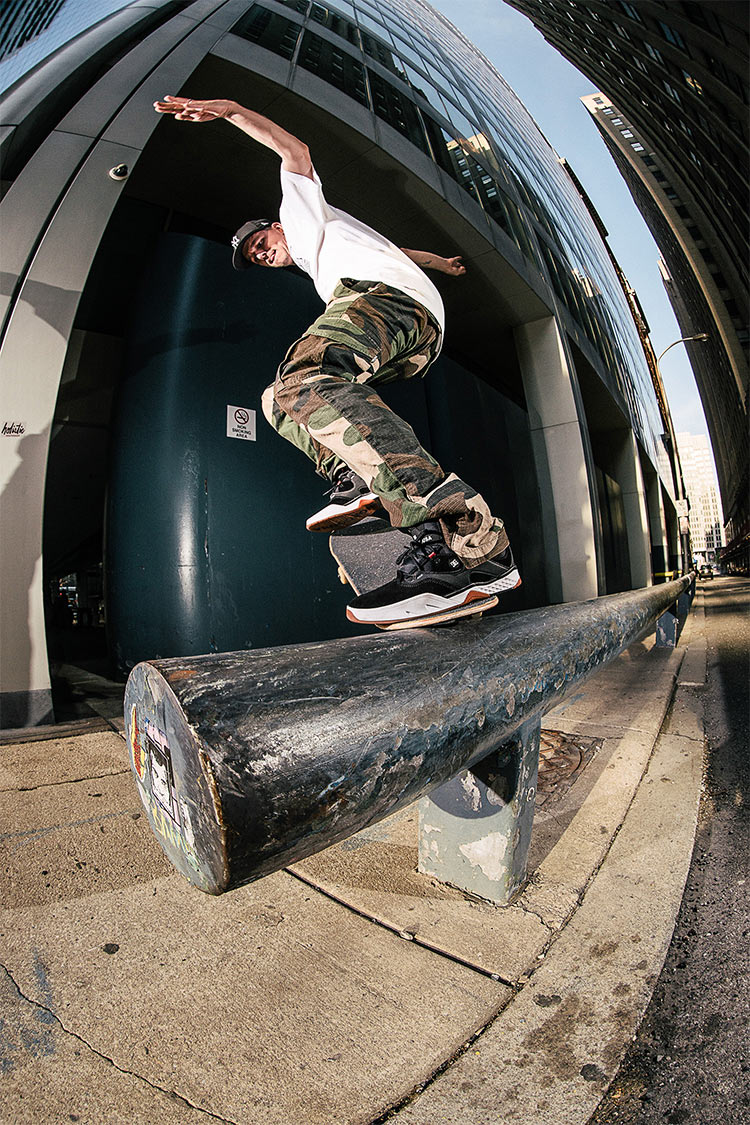 Kalis has always been in his own lane as well. Timeless switch crooks     Photo: Heikilla

Tell me about running from the cops.
It was getting pretty hairy for a while. In the early days, in the mid ’90s, it wasn’t bad at all. The mayor at the time didn’t have a problem with people skating there. It wasn’t until the late ’90s that it started getting pretty bad. At first they would come in Love with dirt bikes or the cops bronco up the stairs and kind of run you out a little bit. It wasn’t that big of a problem until they started the undercover task force. When they started that, they would come in dressed up like skaters, try to hang out for a little bit then—boom, grab somebody and everyone would scatter. It was actually kind of fun sometimes. I paid the cops off with skate shoes so I was known as Mr. Kalis to the concourse cops coming in, the ones that were leading the task force. They would ask me, “Mr. Kalis, how are you? How are the kids?” and then they would just let me go. They would always ask if anyone was from Jersey. I think they liked messing with kids from Jersey. 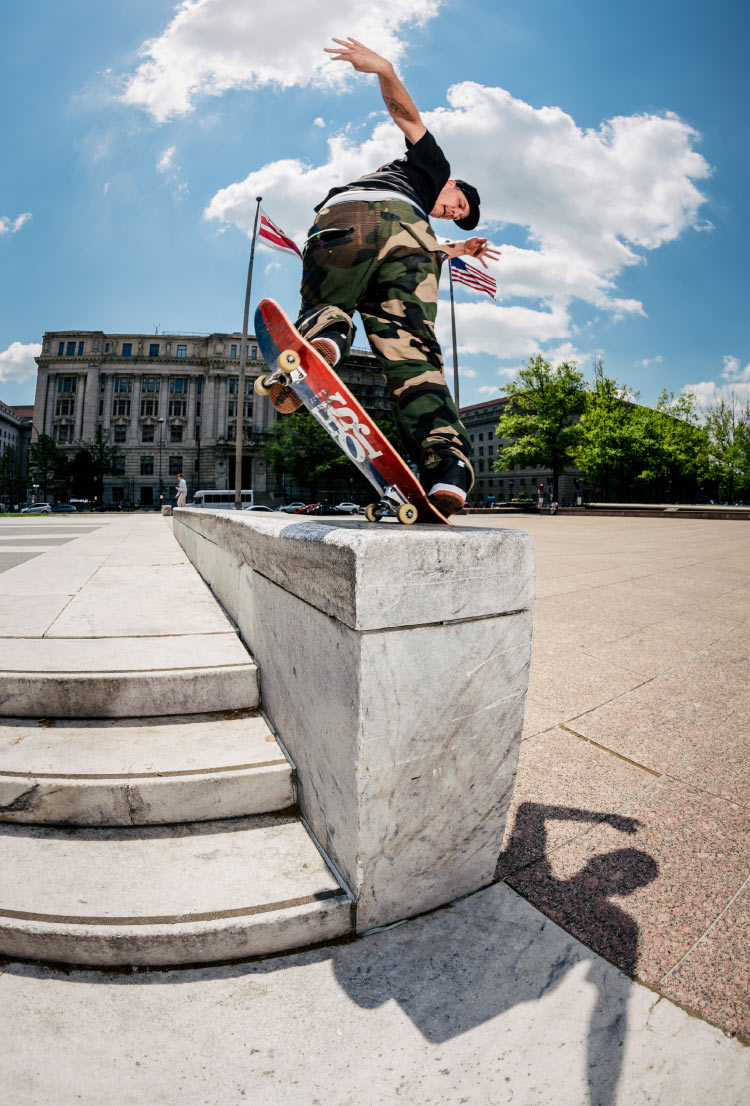 Did you guys get a lot of your gear from hip-hop? Where did you get inspired to wear the clothes you guys were wearing?
Yeah, I think I did, especially when it came to sweatpants, cargo pants, camouflage— it was an urban jungle. What we were listening to was what we were trying to represent on our skateboards in the streets. Originally you catch the vibe from the people in your area. There’s the people walking up and down the block in the neighborhoods, who’s sitting in the park. To be honest, you didn’t want to be that much different. Take Love Park for example: if you were an outsider or a tourist, everyone knew. It wasn’t like you were a target but you might as well have a big bullseye on you because you didn’t look like you were playing the part. Anyone who was local or from certain types of neighborhoods had the gear. They all had the cargos, camos or Timberlands—whatever it was. Also, you were listening to the new Nas CD, Illmatic, and all of these other guys were rapping about what they were wearing. I don’t know who set it off, but they ran parallel with each other.

Flash forward to now. How do you feel about all of the same gear making a comeback and inspiring a new wave of fashion?
I love it; I back it. Since we brought up hip-hop, a lot of the same stuff is going on in it as well. It’s coming from the East Coast and even in that culture, they’re touching back into the mid/late ’90s and bringing a certain type of aesthetic to the table that resembles the stuff they wore back then. To me, I look at it in the skate world, specifically using DC because that’s what it came from. It came from the East Coast. It came from the Brooklyn Banks, Love Park. So to see the kids bring it back and put their new angle on the stuff we started back then is awesome. I couldn’t be more happy and proud of those kids. 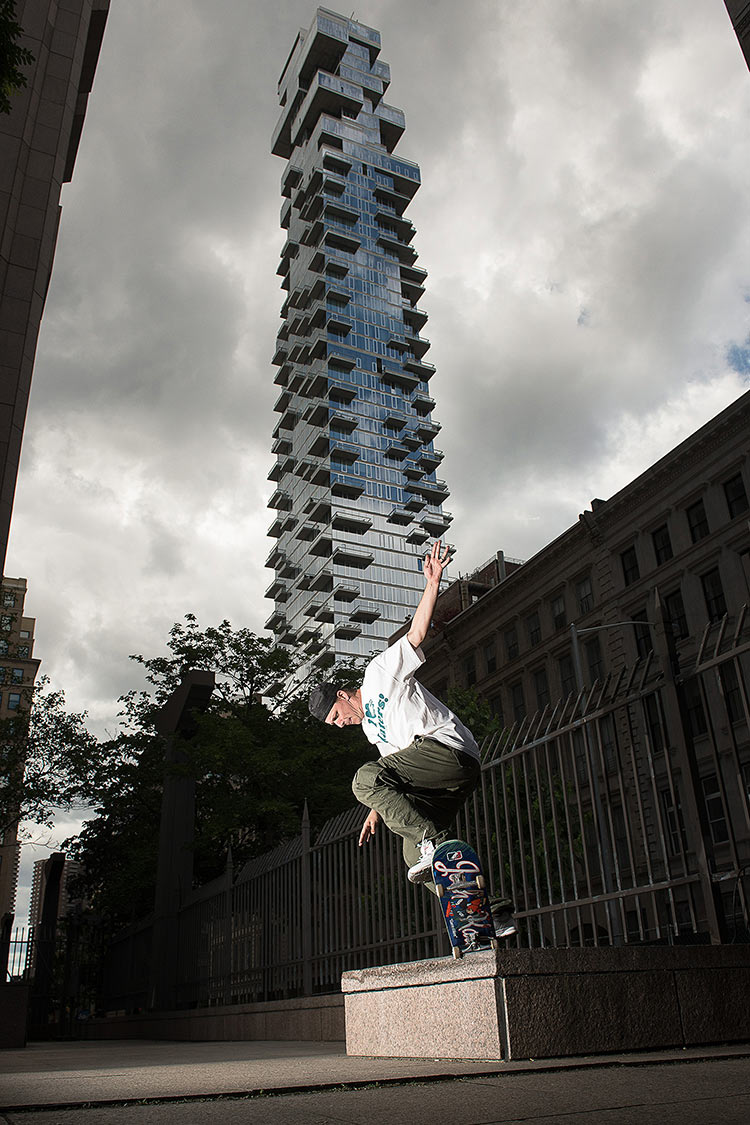 What are your thoughts on the direction DC is taking now?
I think the direction they’re taking is spot on. For a brand that was so important in skateboarding, some people consider the golden era, they were right there bringing out product that no one in the skate world even came close to—such as adding all the different technology—un-rippable suede, airbags in the heels; just the overall aesthetic of the shoe. To see them going back to their roots like that, bringing back shoes that are franchised, and they should be there represented for generations to come—thumbs up from me. I think it’s badass.

Then there’s the new kids. What were your initial thoughts on John Gardner?
The first time I ever met John Gardner, we were all eating and my man brought his own pineapple. We were eating egg burritos or something like that and this dude brought a pineapple. Cut it up and started eating it. I think he might’ve not had shoes on and he had a flute. I raised my eyebrows, thinking What is going on with this dude? and instantly became friends with this guy. He’s got his own lane, that’s for sure. The way he skates, he just sees things that most people don’t see. I like the kid. I’ve tried to meditate with him. I just find myself floating across the street over to 7-Eleven to grab a pack a smokes and I’m out. 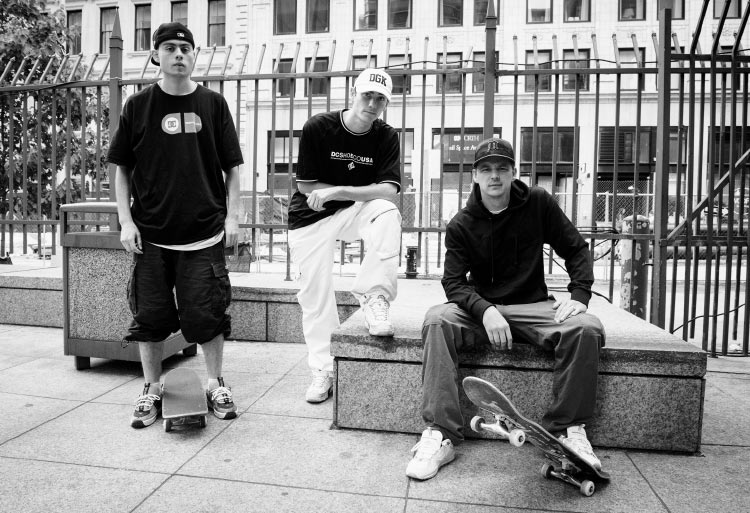 John Shanahan—what do you think about people saying he’s trying to be exactly like you?
I think John Shanahan is representing an aesthetic that he really likes and is into. I don’t have any problem with it at all. As a matter of fact, he puts his own twist on it. With the vintage side attached to it, I think it’s rad. A lot of these guys, Shanahan specifically, are at the forefront of creating a new look with the old stuff. I don’t know how to explain it, but it’s his own interpretation of how he makes the mid-to-late 90’s-style look for him and that puts him in a lane of his own. He’s not copying me; he’s doing what John Shanahan likes. It’s taking some of the stuff we did or looked liked to the next level—the John Shanahan level. His skating is like a better, more-modern twist of ’90s skate. Obviously he’s got way more pop than I’ve ever had. He gets to skate different things that I’ve never skated because I never got to that level. You just sit back and admire.

Wrapping this up, what are your thoughts on the future of DC?
My thoughts on the future of DC is that it’s looking really good. I know with all of these re-releases and diversity of the team, people like Gardner, Shanahan, Tiago, T-Funk, it can’t do nothing but go up. With DC going back to it’ roots, it’s watering that soil. The flowers that are going to be blooming from that soil are unreal. The future is going to be awesome. 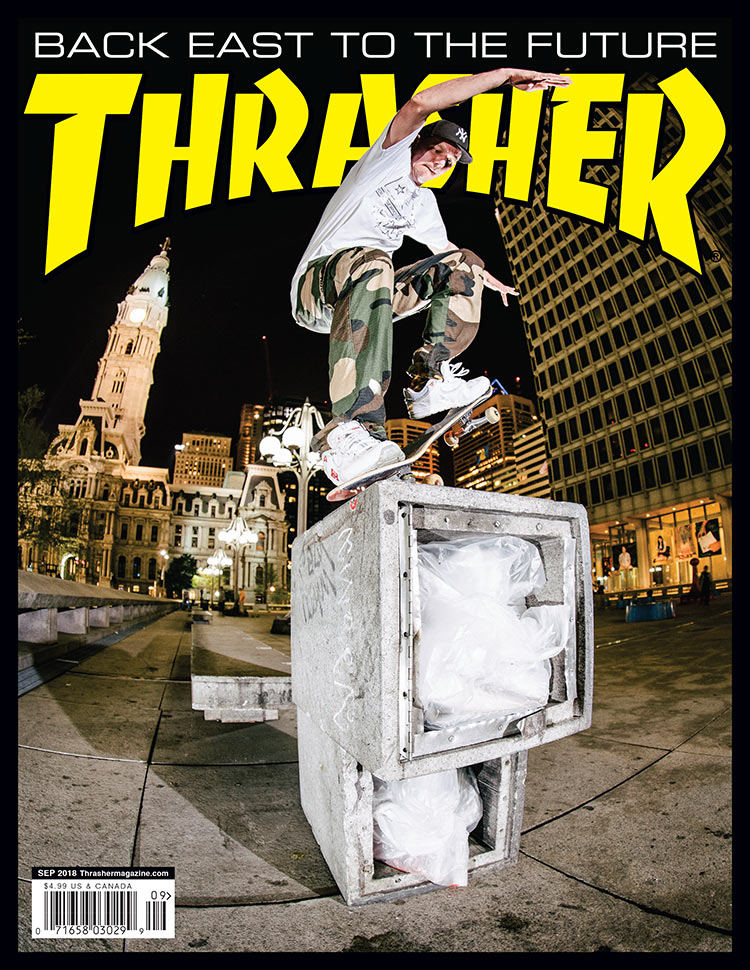 As reliable as the clock at City Hall, Josh Kalis takes us back to the future of classic streetskating. Noseblunt blast at Thomas Paine Plaza     Photo: Heikkila