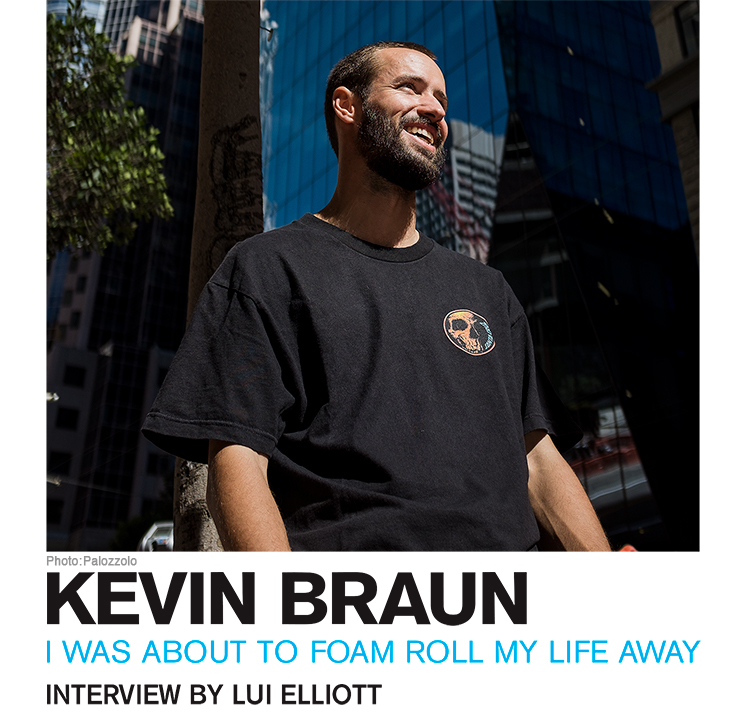 What’s up, Kevin? You at home?
Yup. How’s Montreal?

Yeah, I’m in Drakeland.
Toronto goes. We did a trip there about three summers ago and that city is so tight. I’ve always wanted to go to Montreal, though. Seems dope. The French side of Canada.

What did you do today?
We skated in downtown San Francisco, some Market Street gap. My body is fucked so I was about to foam roll my life away.
  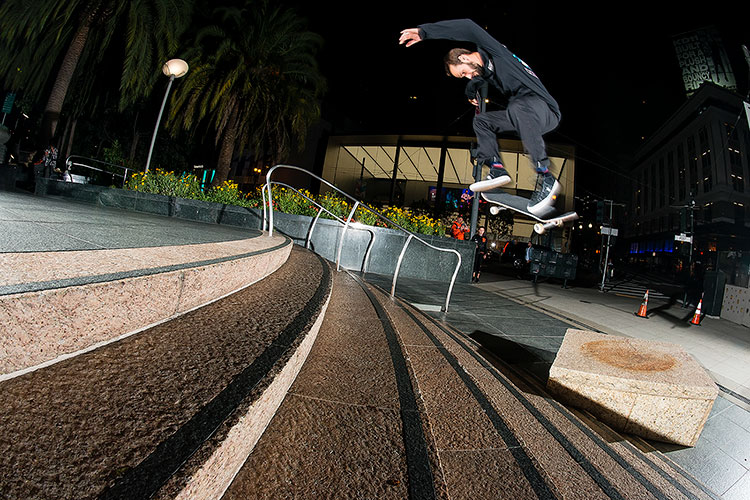 He may eat like a fat ass but he nollie flips like a badass—backside onto the block at Union Square     Photo: Palozzolo

What’s your ritual every night after skating?
I foam roll and stretch for a while so I can keep my legs loose.

Have you always been on some skate forever kind of shit?
Nah, it’s not really like that. A few years ago I saw my friend Pat foam roll when I was in Arizona and I was curious about what it was all about. He told me all about it. It helps you not be sore the next day.

Are you on a healthy tip?
Definitely not. I eat like a fat ass. 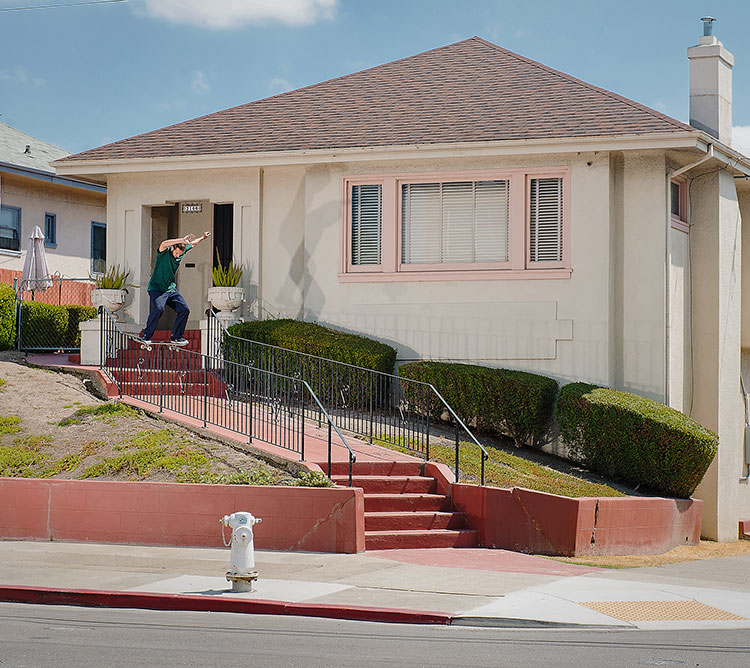 The pasta boy gets kinky with a boardslide     Photos: Palozzolo

You and Brendon eat pasta every fucking night.
We’re pasta boys, for sure. I just like it because it’s easy. I’m not much of a chef so it just works.

So it’s nice when Dad comes home and cooks a meal for you, huh?
Yup. But you know what? I try to do the wheat noodles and add vegetables in there so it’s a little bit healthier.

Do you drink and smoke?
Yeah, but I quit smoking recently. I’m on the JUUL now and, in fact, tomorrow it’ll be one month. It doesn’t seem like that much but it’s a huge accomplishment for me. I used to smoke a lot. 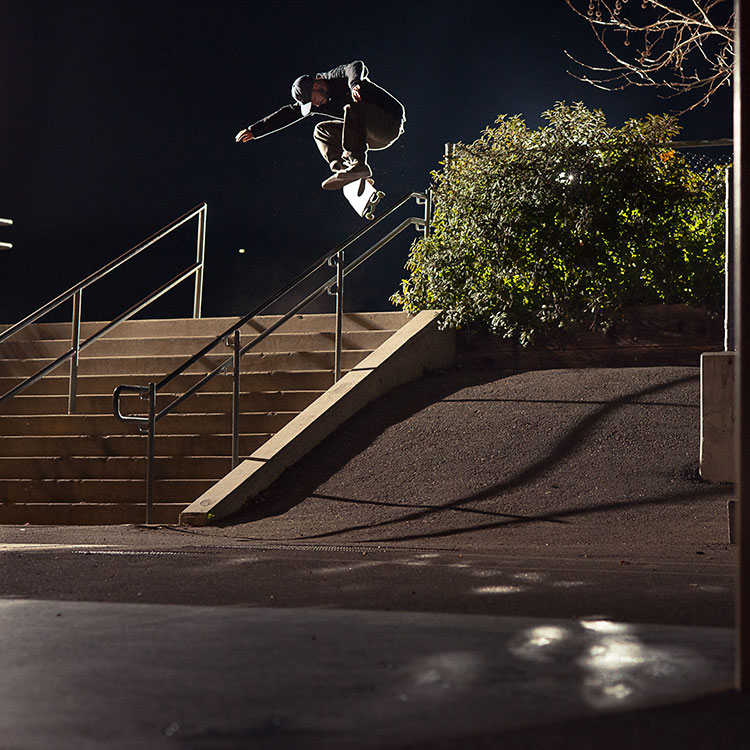 How did you get into smoking as a kid?
I couldn’t even tell you. Just being a dumb kid.

Did you think you just looked sick or something?
I don’t know why I started, man. I recommend that nobody ever start smoking.

So you’re from Chicago?
From the suburbs. A town called Naperville. I was born in Woodridge but I grew up in Naperville.

The indoor park closed so Kevin had to take his pop shove nosegrind to the streets. Masonite boogers suck anyways     Sequence: Shafer

What would you do during the winter when the snow would focus the whole city?
I would try to skate indoor parks a lot. There was one good park that I skated for the last couple of years I lived there called Crush. It eventually closed down the winter before I moved out of Illinois. It actually sparked me to move out of there.

So when you moved, you went from Illinois to Arizona. Why the fuck did you want to go there?
I had some friends that had moved there. There was a big Illinois/Arizona connection for some reason. All my friends and I are super into watching Arizona videos: A Happy Medium, Boyish and Worship Friendship. All that stuff sparked me to move out there.

It just feels so random, to move from Illinois to Arizona.
It’s random but I didn’t want to move to California because I didn’t know anyone there yet. That didn’t seem like the right move at the time.

How old were you when you moved to Arizona?
I moved there when I was 19, I believe. And I moved to San Francisco in June of 2017. I was 23, so I spent just about 4 years there. Maybe a little less.

Did it cook your brain like it did everyone else in Arizona or were you not there long enough?
The heat definitely makes you a little fried, I’ll say that, but I don’t think everyone is as fried as everyone else thinks. The dudes that live there are just goofy, which I love. It made every day really fun.

Just like the winter in the Midwest, what are you supposed to do during the summer in Arizona?
The summers were so harsh. We would skate Tempe park at night a lot. But even when the sun is down, it could still be 100 degrees. It was crazy. 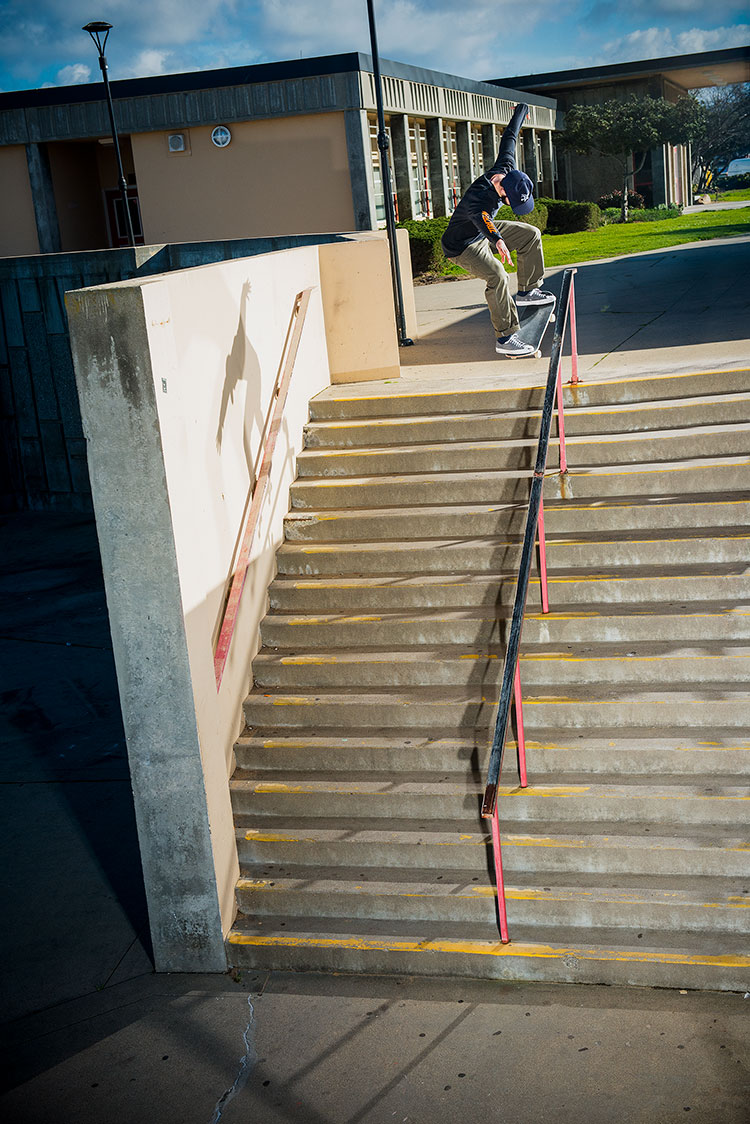 He’s out of the desert but still bringing the heat—heavy nollie 50-50 down a 15-stair     Photo: Palozzolo

How are you okay with staying there like that? It seems so miserable.
The first couple years I was just really psyched to be out of the harsh Illinois winters. I’d still take an Arizona summer over an Illinois winter.

So you moved to San Francisco after Arizona. You moved in with Brendon and I. We’re roommates.
Yes, that’s right.

What were your initial thoughts moving into our house?
I was psyched, I had never been to the house until I moved in, which is kind of funny. I was hyped to move in on a whim. I had only met Brendon twice before I moved in with him. The first time I skated with him, he had mentioned there was a room opening up at his house and the rent was pretty cheap for out here. I was trying to get to California at some point—to San Francisco—so I just jumped on it. It was time. My room is small but I love it. Actually, our house is sick. We got a good crib. 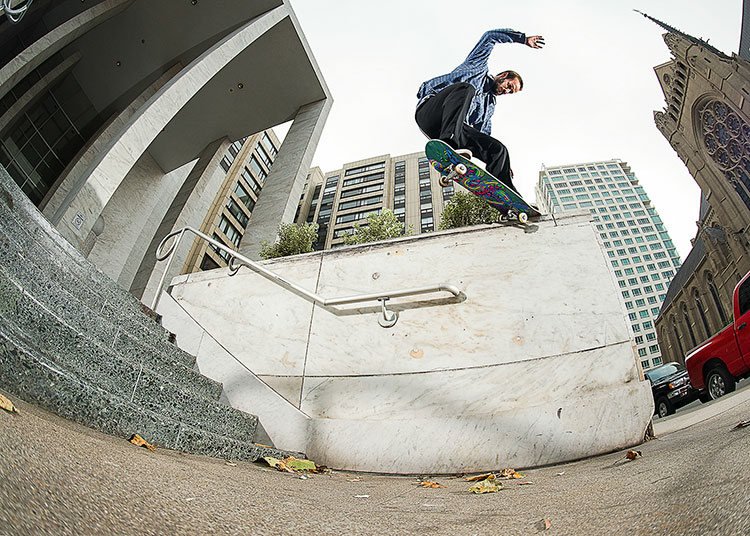 Kevin takes a switch crooks for a walk before rounding up the hounds     Photo: Palozzolo

As far as skate houses are concerned, what do you think of our place?
I don’t even think of it as a skate house, man. Everyone at the house does skateboard but I’ve lived in a real skate house in Arizona. It’s not on that level. We don’t have people over every weekend, drinking, smoking, all that. We keep it pretty clean. We do have the playhouse, though. It’s where we stretch and where you have all of your motorcycle parts and toys left out.

Switching gears—Santa Cruz. What’s it like riding for the screaming hand of pain?
It’s awesome. I love it. We travel so much and go on so many trips. There’s never really a dull moment. We’re always working on video projects and stuff. I love that we always stay on the move. Our team is getting way sicker, all these new guys that are getting on, they’re all really gnarly. It’s an exciting time to be skating for them.

Do you work a job along with being an amateur skateboarder?
I walk dogs for an app called Wag.
 

That sounds pretty beast.
It’s amazing. It’s the mellowest job I’ve ever had. I basically hang out with dogs all day. I love it because my previous jobs, before I moved here, were customer service. You had to deal with a lot of people. But with this job, I barely have to talk to anyone unless the dog’s owner is home. It’s super easy. Dogs aren’t going to yell at you if you’re doing a bad job or something.

Do you have any travel plans in the near future?
Yeah, at the beginning of October, we’re going on an OJ’s trip. We’re going through the Midwest. Then a few days after I get back from that we’re going on a Santa Cruz trip doing a few demos. It’s more or less a trip from California to Tampa, which is a long-ass drive.

That sounds so gnarly.
It’ll be hectic but fun. We’re also going to Tempe Halloween, which I’m looking forward to. Have you ever been to that?

The Duffman goes on a manual bender with a half Cab nose wheelie backside nollie flip     Sequence: Palozzolo

Nah, I’ve never really been to Arizona. It looks pretty sick, though.
It seems like the most Lui thing ever. You would love it.

What have you dressed up as in the past?
I’ve been Duffman from The Simpsons every year.

Why don’t you change it up?
I don’t know. I just love that costume.

Is that a testament to what kind of person you are? Never changing it up?
Dude. Kind of harsh.

I’m just fucking with you.
I know, I know. You’re making me rethink my whole life right now. It’s all good.  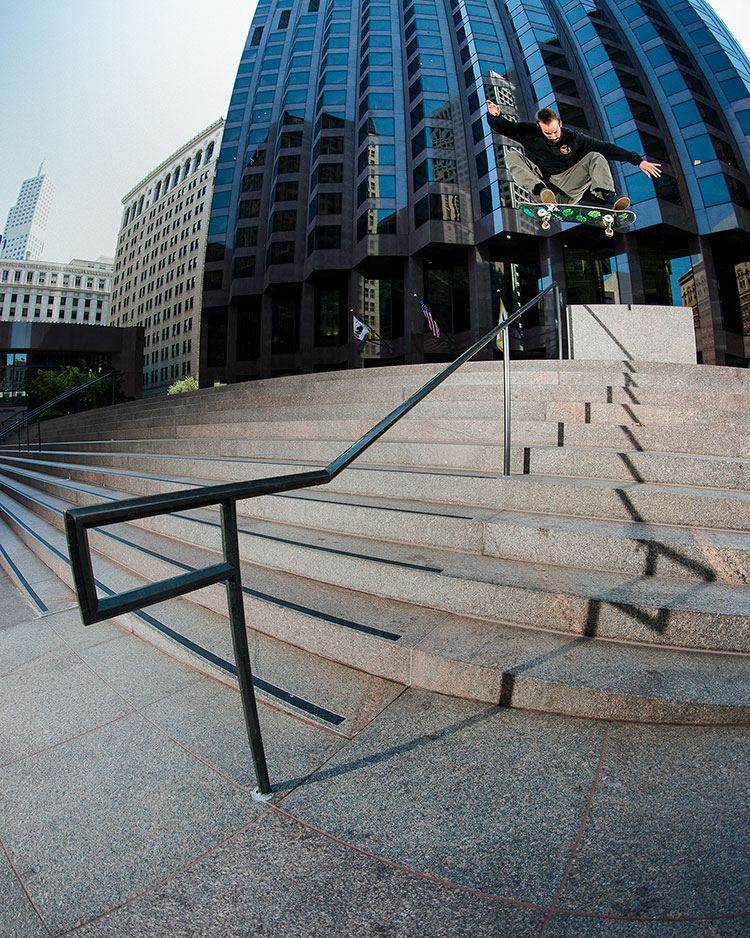 Changing it up with by way of a switch frontside flip. Nice catch, KB     Photo: Palozzolo

What’s next for Kevin Braun?
Just those trips and we’re coming out with a Santa Cruz video at the end of November. Travel and skate a bunch. On to the next.

Well, I’ll be home on Thursday to make you a home-cooked meal. What do you want? Japanese? Italian?
You know I love some Italian food. 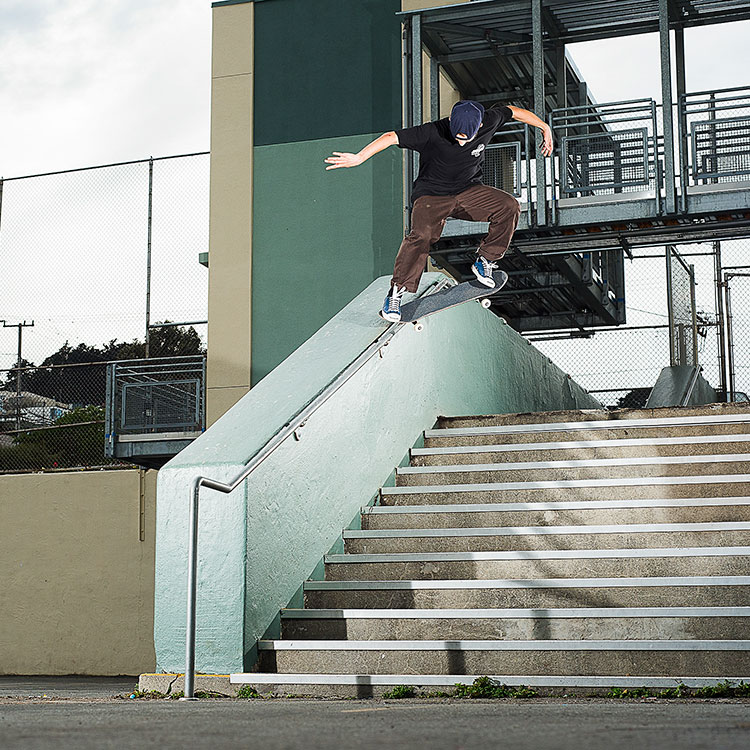 Nollie crooked grind while Lui’s in the kitchen cooking up some sausage. Congrats on that pro board, Kevin!     Photo: Palozzolo