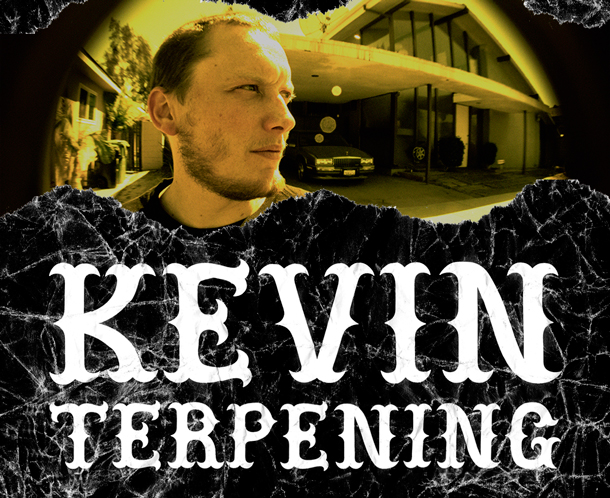 When I first met Terp, I thought he was kind of an asshole or thought that he didn’t like me for some reason. Not really because of anything he said but just by his demeanor. Then again, I didn’t know him. I bought a drum set and had nowhere to play it so I brought it to my friends' house where I could hang and play all the time. They also had an electric guitar there. Terp plays a little guitar and had actually grown up with these friends of mine. We ended up hanging there and jamming one night and—hey, I think it actually sounded alright. Little did I know that from that point on we’d end up hanging and skating everyday for years to come, and we still jam from time to time. That being said, I don’t think he’s an asshole anymore and I’m happy to call him one of my best friends. He is also one of the most influential skaters of our time and is held accountable for the no-comply influx of 2014. This is real street skating. Your eyes aren’t blessed with this everyday. —Jared Sherbert

So we’ve been skating together for years now and the first thing we work on after all this time is a web interview. How's that shit?
I think that’s pretty typical of me being weird and not knowing what I’m doing. Last minute we just do something and that's how it always works, right? 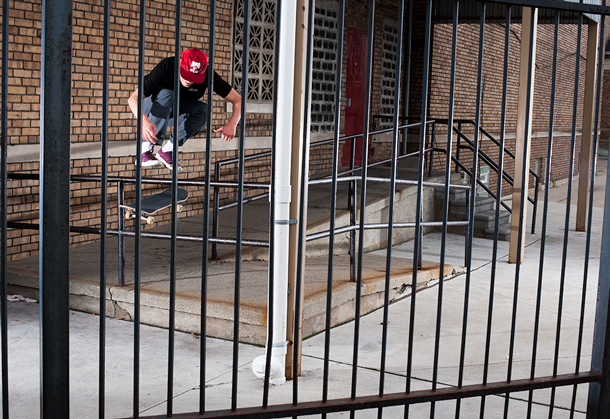 Typically, yeah.
No plans and then next thing you know we’re shooting photos and it’s going on the Internet. That’s where everything goes anyway, so fuck it. I’d way rather be in the magazine but, you know, there’s deadlines and stuff.

What does a typical day look like for you?
I usually wake up late. I mean, lately I’ve been waking up kinda late but psyched to skate. So usually just hit up you and Marty Reigel and see what's going on. I usually have a spot in mind and then we go lose our minds for, like, three hours trying to get a trick. But it’s fun. I haven’t been skating skateparks, just street skating. Saving myself for the spots. If it doesn’t work out, we eat. A lot. 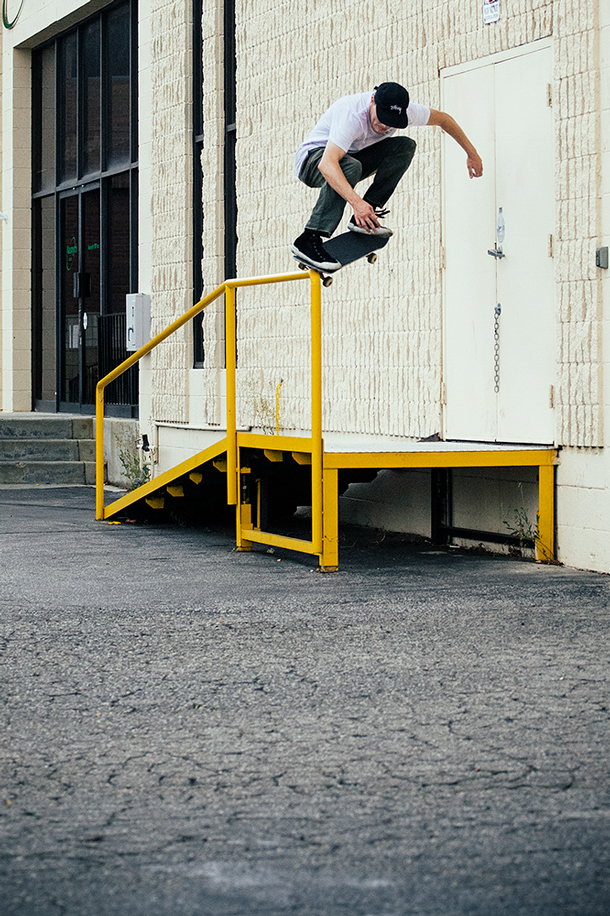 What’s your bedtime? Do you have a bedtime?
Anywhere from 1am to 4:30am, basically.

What are you doing till then?
Usually watching a movie or I get sucked into some weird Internet hole and I’ll smoke a couple cigs in between. 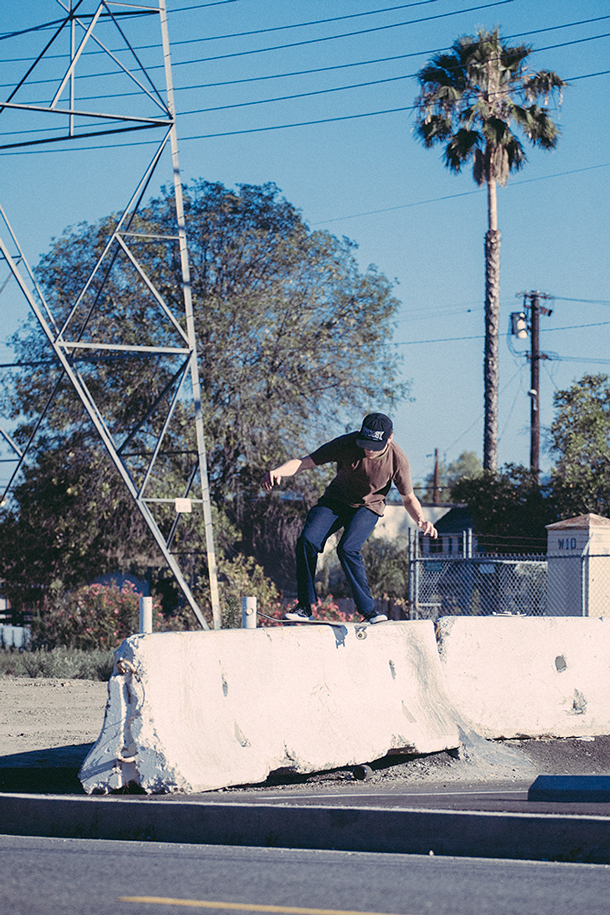 What do you do to escape the dark depths of skateboarding?
You mean like when you’re trying tricks, battling, not landing shit and losing your mind? Well, I try to leave that at the spot but that’s kind of impossible sometimes. Going home to the dog, the girlfriend and some beers can definitely set me straight for the night. But really, the only thing that gets me out of that is landing tricks and doin’ it. Putting all four wheels on the ground. That’s really the only thing that will get me out of that bummer feeling where you just feel like you’re blowing it, even though you’re trying. When you land shit you forget about the dark times. But yeah, we fuck around, go to the beach, surf. That’ll help sometimes.

Do you feel like surfing has helped your skating?
I watch a lot of surf shit. I don’t know anything they’re doing but watching people with sick style is sick. Craig Anderson, Dane Reynolds—they have sick style though I don’t really know what they’re doing, per say, but I can relate to their movements so I feel like it’s pretty cool to watch. It’s just like skating. It’s not like the skate world, but it has the same vibe. Gets me psyched to skate sometimes. 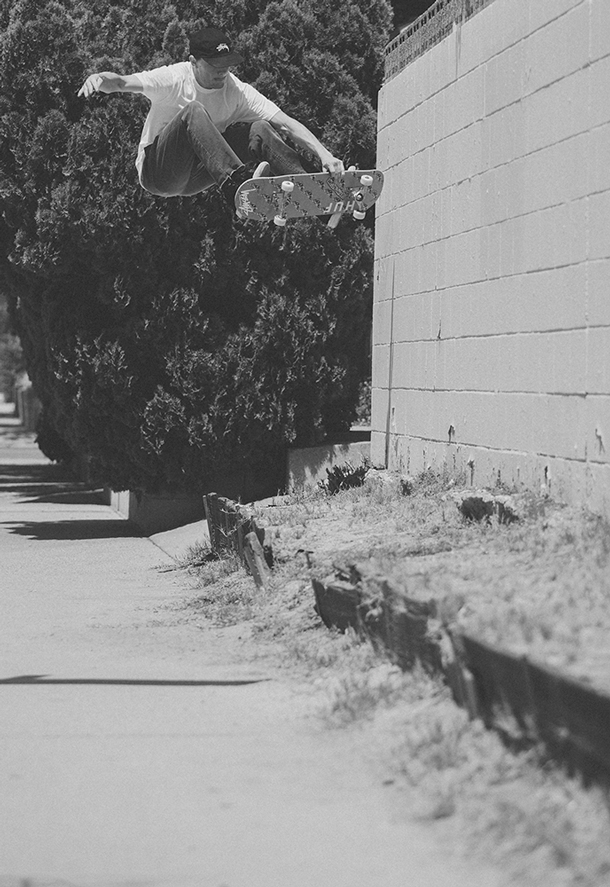 What else gets you psyched to skate?
Having something to work on gets me psyched because we’re working towards something. It doesn’t matter what it is: a commercial, a video part, whatever. I think just finding new spots and skating whatever we have at the moment, going for it and trying to film everything and not be too picky keeps me stoked. Just being in LA and skating with my friends. Getting shit in LA makes me want to get more. I don’t feel like I have to go somewhere to get shit.

Who are some of your influences?
I would say just all skaters. I really like old classic shit, obviously. Everyone does, but I mean, Neil Blender video parts you can watch over and over. Anything from that era: Jason Jessee, Gonz, Tom Knox. That’s the kind of go-to stuff that I watch if I’m itching to skate. Then, obviously, that goes to AVE, Dill, old Workshop stuff. I think right now it’d probably be, like, Dylan, Grant Taylor and Andrew Allen. There’s a bunch but I would say those are my go-tos. Alex Olson’s new shit in the Supreme/Nike edit was sick. Everyone on FA and HUF, even the young kids on FA influence me to stay up on it and just do what I’m doing and try to push myself. Skating with AVE has been a heavy influence on all of us. 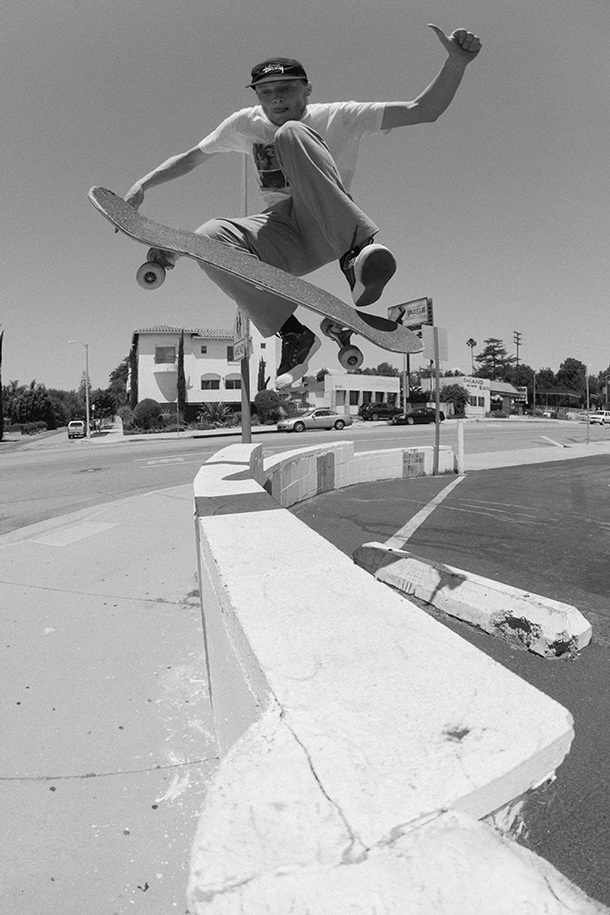 How was it working on this part?
Working on this part was cool because I’ve only done little commercials with Marty, so it’s nice working together with him on something a little bigger. Finding spots, lighting them up, filming clips, going back and importing the footage and seeing how it looks in the timeline. There’s something about working with the filmer, you have this bond and we’re doing it and editing it together. It feels cool. I’m sure people that work closely on projects together for years and years have a crazy bond.

It’s like jamming.
Exactly. You know each other and know exactly who you both are and have that bond. We're jamming, he’s editing and filming and I’m skating. It’s a sick thing to do with someone that’s your friend. We’re stoked on what we made but we're also both, like, is this good? We spend so much time in it to the point where you’re, like, what even is this anymore? I wish we could keep it going. Once you get that momentum where you’re getting shit, you don’t want it to stop.