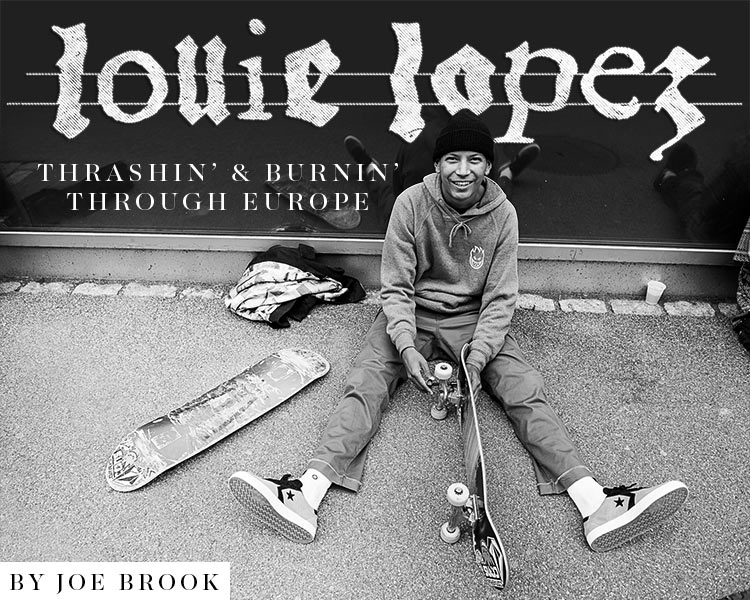 Let’s talk about Thrash N Burn. Does it live up to its name?
Thrash N Burn went beyond its name. I feel like it was one of the greatest trips I’ve ever been on. The vibes were high and everyone was feeling it. The crew was sick, the most insane skaters.

Spitfire brings the fire, right? Brings the heat to the spots?
Yeah. It was insane. Every session was heated. 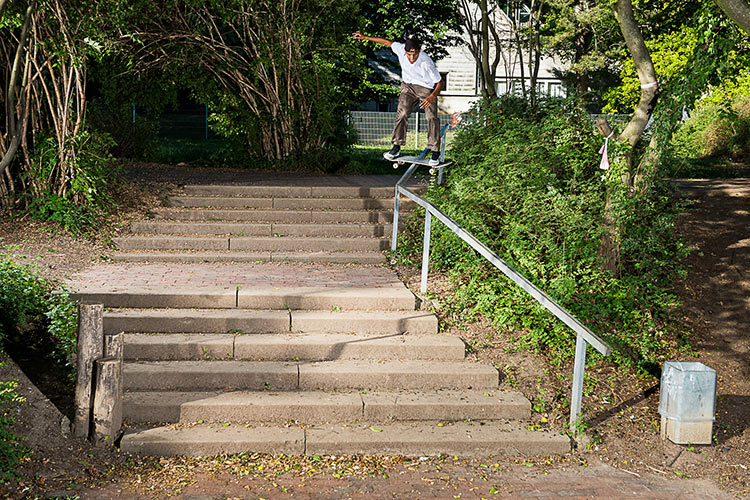 Louie torched everything in his path on his first Spitfire trip. Boardslide through the kink, lit as F

What was the vibe like in your van? Were you in the mellow van or the party van?
Well, for the first part of the trip we were in cars and I was in Frank’s car. I was Frank’s co-pilot. That was sick. He’s the funniest fucker. Just hearing a bunch of stuff coming out of his mouth is the best. I was laughing the whole time. Frank is the best!

What was one of your favorite moments from the trip?
I’d say probably Stuttgart, ‘cause so much happened, good and bad. It was a quick couple days, but so much happened in those couple days that it was definitely the highlight of the trip.

So what happened, dude?
Well, you know, the boys had a night out and woke up in jail—in German jail!

How was being in jail for the first time? You got arrested for basically no reason.
Yeah, they arrested a few of us for nothing. The whole squad went down. But yeah, it was definitely crazy. It was a lot easier knowing you’re not the only one in there. I think there was five or six of us in there, so it was, like, "Alright, at least I’m not solo up in here." But it was definitely pretty trippy. Going in, I didn’t know what to expect, so I was, like, "Damn, first time in jail and it's in Germany."

First time for everything. Did they speak English at all or no?
Yeah, they spoke English. They were actually pretty mellow and it wasn’t too bad. We were in there for five hours or something. It was what it was and then once everyone was out, the vibes went back to normal and everyone was just fired up to be out of jail and to go skate.

Did you tell your mom you went to jail?
Yeah. It was funny, because I actually saw the cops pull up and they came in hot! We were just chilling out in front of the hotel. I had my phone and I was taking pictures and sending them to my girlfriend. I was, like, “Damn, the cops just pulled up and they’re hassling us, so if I don’t reply, I feel like we’re going to jail or something.” Then she didn’t hear anything from me for hours, so she’s freaking out and she called my mom and said, “Hey, Louie might be in jail.” So as soon as I got out I called them and they were, like, “Are you all good?” And I was, like, “Yeah, we’re good.”

That was insane. Jake’s, like, "Everyone's in jail," and I’m, like, "No way, dude." They basically just arrested you ‘cause they felt like being assholes.
Yeah, I guess. But I mean, that was just a part of the trip; everything else was epic. Epic vibes.

Wallie 180 fakie manual fakie flip out. How do you say "bolts" in German?

What was one of your favorite cities we went to?
One of my favorites was probably just the whole Zurich/Switzerland part where we drove through the Alps. That was insane. There were cool spots there and it was just a cool place, so I really liked that part of the trip.

Who did you room with?
Our squad was pretty much me, Mack Scharff and Frank. That was our squad for pretty much the whole trip. We’d try to get rooms together and it worked out pretty good, super mellow. So yeah, I’d say we got a pretty good crew.

Who do you think the MVP was on the trip?
I’m gonna go with Skankie or something. Daan is just always on fire and doing the craziest, most wizard-like tricks you could imagine. So I think Daan and Grant—but everyone was really killing it. Also Zion. It was a different kind of trip. Everyone was super hyped to be on the trip with each other. It’s not like a company trip or anything like that. It was just bros skating and everyone was feeding off each other. For the most part, a couple people would skate every spot.

What was one of the gnarliest tricks that went down?
A lot of gnarly tricks went down, but probably Raney’s ollie. That was insane. We were in Milan and Raney pushed up this massive bank and blasts over the rail into the bank. Being there in person was insane. That spot is crazy, because first off it’s hard to get to the top with any speed and he made it happen and still cleared the gap and rolled away.

How was the Zurich demo? You guys put on a four-hour demo!
Oh, in the massive park? That park was insane. That was one of the craziest parks I’ve ever been to. It just keeps on going. There’s a pool section, a massive street section and it’s seriously probably the biggest park I’ve ever been to in my life. You have Grant and everyone just fucking up the bowl—that was just one demo—and then that ended and you’d have the stairs, and Ishod and Zion just going in. There’s just so many things to skate at that park. There were seriously multiple demos going on.

How was it having Phelper on the trip? Is that the first trip you’ve been on with him?
No, actually one of my first trips out of the country was with Phelper when I was super young. It’s pretty funny. We would always talk about that. We went to the Cayman Islands, but I haven’t been on too many trips with him since then. So it was cool to get back on a trip with him. Phelper is the best. Pure energy and a skate rat to the fullest, loads of good energy. Seeing that video of him bombing that hill in SF, that was, like, "Yup, that’s Phelper right there. Charging it."

Yeah, pedal to the fuckin’ metal, right?
Yeah, that was insane.

What was the vibe in your van like?
It was pretty mellow. The other van, I would say, was like a little bit gnarlier. It was pretty fired up in the other van. Ours was too, but it was more mellow-ish. 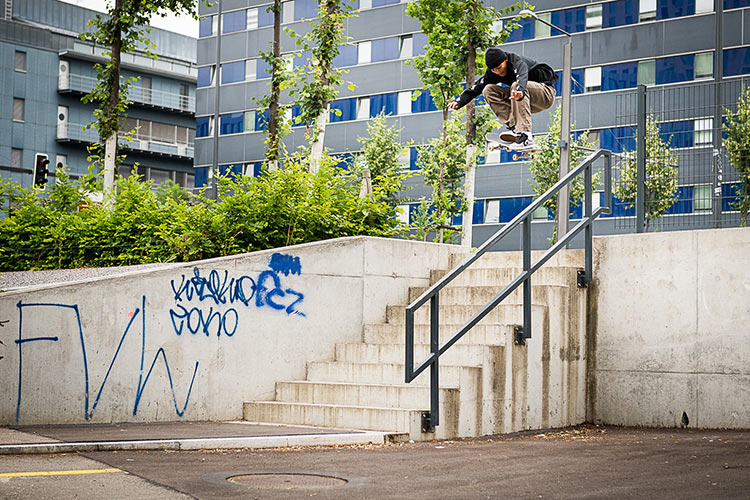 Louie puts the pop in pop shove it. Over the rail, heavy sail

What was up with Ishod snoring all the time?
Ishod would just pass out. I was sitting next to him and he’d start snoring so loud that he wakes himself up from a deep sleep. Then he just looks around, nothing moves but his eyes and his mouth is still open. It’s just funny catching him waking up ‘cause he’s snoring. He’s got a loud-ass snore too.

Did you learn anything from the trip?
Yeah, I mean the same as any other trip, just living it up and enjoy being on the road. Enjoy the time skating and hanging out with friends.