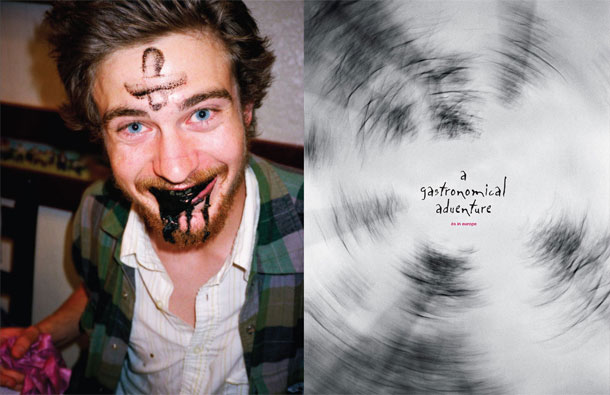 To start off the summer, the good people at éS sent us on a two- and a half-week gallivant across the UK and Europe with Scuba Steve and Sebastian Palmer at the helm. The trip began in Scotland, moved on to England, over to France, and finally down to Spain. The plan was pretty standard: Travel around the above-mentioned countries, skate some spots, and get more acquainted with our European counterparts. Getting more acquainted with our European counterparts, however, meant our crew would be doubled; maybe even tripled. There were 25 people with us at all times. This made everything a little more interesting. Meals would require a table that was half a mile long. When we showed up to skatespots, the locals probably felt like a double-decker tourist bus had just let out. Checking in and out of hotels was  a whole different story altogether. So with our massive crew,  we journeyed through these lands and enjoyed the unique ride. 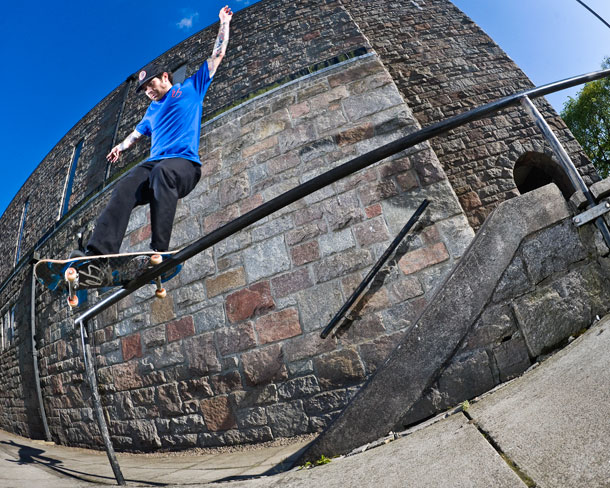 Bobby—aka Bumpa Clot—loves a liquid lunch. Here’s a cheeky front feeble to fakie on his way to a get a pint of Greenmantle, Aberdeen’s finest. Click image to enlarge. 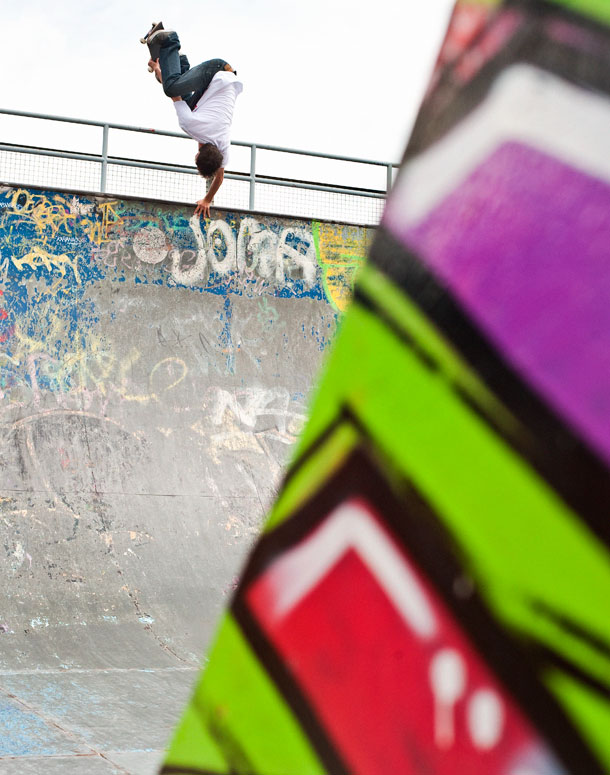 We began our journey in John Rattray’s hometown of Aberdeen. John took us around to some of his crusty old spots that he grew up skating. From there we headed to Scotland’s capital, Edinburgh—a city filled with amazing medieval architecture and rugged skatespots. On our first day in town, we explored the city and went out for a full day of skating. To finish things off we strolled to a curry house down the street from our hotel for a huge Indian meal. We had a substantial crew that evening, ordering everything you could imagine. At the end of the meal, the waiter politely informed us that the credit card machine was down, even though multiple stickers on the front door suggested quite the opposite. While Seb and our waiter were going back and forth about this scenario, the members of our table were trickling out of the restaurant one by one. By the time it was settled that Seb would withdraw cash to pay for the meal, a majority of our crew had dined and dashed. This all happened at closing time, and we were the only people left in the restaurant. The waiter didn’t want to take any chances, so while Seb exited to find an ATM, our waiter made a sneaky beeline to the door and locked the rest of us inside. He’d made the quick change from giving us service with a smile to trapping us in his culinary dungeon and throwing away the key. After a few minutes that felt like hours, Seb returned, and the waiter let us go. We high-tailed it out of there and reunited with the rest of our crew who’d unknowingly left us for dead, followed by a well-deserved night’s sleep before heading south to England.


Javi ordered my meal in Vitoria at dinner. I asked him what it was. “It’s the cheek of the fish; one the most succulent cuts of meat.” Just like Javi’s switch flip back tail to nose wheelie 180 out, always a prize cut! First try, bitches! Puff Tuff President. 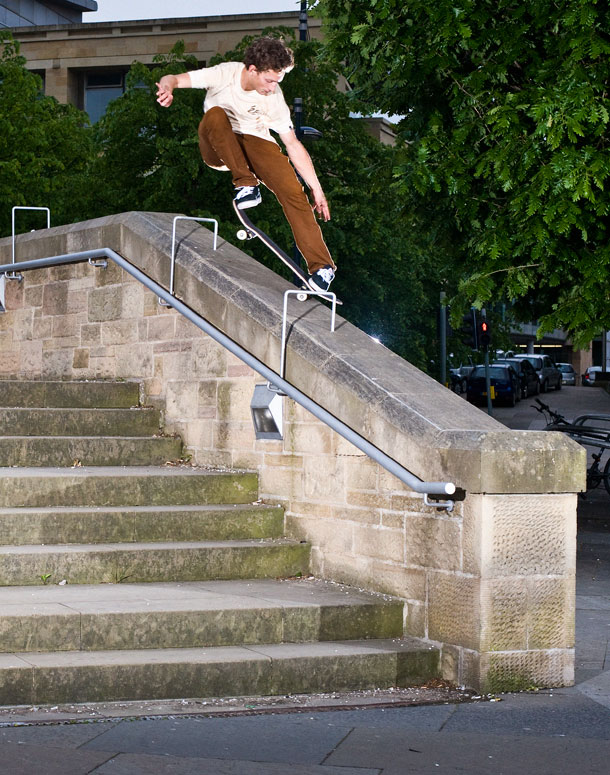 Appropriately enough, we were greeted with rain when we arrived in England. We spent our first few days traveling between Newcastle, Sheffield and Corby, Kettering, Plymouth, and then finally to Bristol. We skated lots of spots, ate lots of curry…we even saw a father and all his children playing Sex Pistols covers at a pub. But it was in Bristol where things got really entertaining, as we were skating a fun little ledge-to-bank spot reminiscent of the Baldi School in Philly. It happened to be situated right next to a playground littered with little kids, which made things pretty interesting once we showed up and completely blew out the spot with our huge crew. We quickly realized that some of the kids were getting frustrated with us taking over their grounds. Of course their parents weren’t that psyched, either, and suddenly one mother called out, “Da boy in da blue shirt wit da bad attitude, get over here!” This, of course, was Bobby, so he made his way over to them and had a confrontation in which he explained to the mother that she in fact was the one with the bad attitude. She didn’t seem to share Bobby’s opinion, and at that point all the kids were beginning to form a line in front of the ledges to block us from skating them. In addition, the locals had just informed us that we weren’t exactly in the safest part of town, so in order to avoid a small army of toddlers and enraged mothers turning on us, we booked it out of there and went on our way. The following day we bid farewell to pounds, fish and chips, and driving on the left side of the road—setting sail for Bordeaux, France.


Slappy 50-50 transfer into a sliver of marble on the dark side, smoother than the sugar glaze on a creme brulee. Rattray, Madrid, Spain. 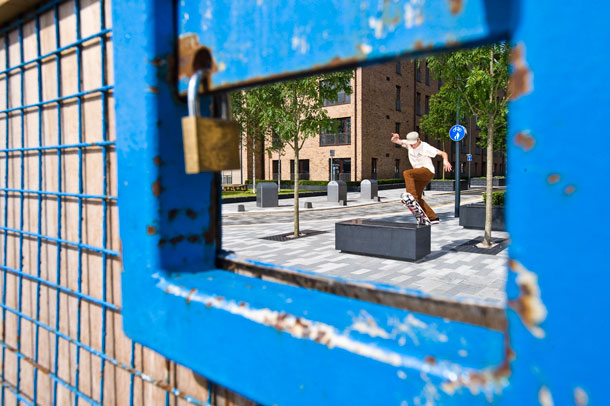 
No Future For You 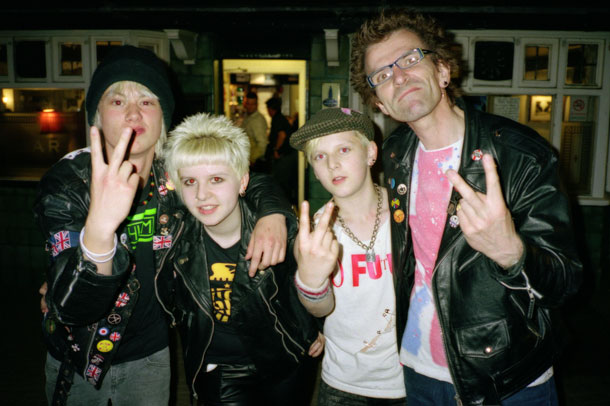 So we’re passing through Kettering, England, about to get gasteral on some Indian cuisine. We were locking up the van when I saw this little pub rocking out to some Sex Pistols, so I went in with the Fatback cam to check it out. It was a family band, on their practice night: The dad was the back-up singer and guitarist, the daughter was on lead vocals, the son was on bass, and the mom on drums! Pretty cool to say the least. Dad was bummed that it was only practice, but it ruled to see them play together and see how much fun they were having! I reminded the ОS team every day after that: “No future for you!” —Joe Brook 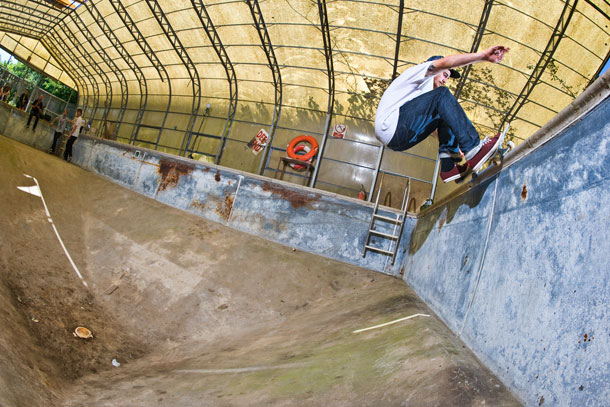 Manderson, bangers and mash for breakie all day. 50-50 axle bash in the home town of Tom Penny. Click image to enlarge.

Our massive crew arrived in Bordeaux with three stick-shift vans waiting to carry us to the Basque Country. Throwing caution to the wind, Scuba volunteered to drive one of the vans, even though he had no experience with manual automobiles. His position as the captain of the ship didn’t make it past the airport parking lot due to six stall-outs in a row. We got into town and met up with Javier Sarmiento, Gauthier Rogers, and Mark Frolich, and enjoyed some of the delicious wine that Bordeaux prides itself on. In fact, we enjoyed it so much that a few of us took to the wino lifestyle for the rest of the trip, opting for purple-stained lips and teeth instead of bloated stomachs from frothy beverages. Unfortunately, we were only in Bordeaux for a couple days, but we managed to skate some good spots and take in the city’s sites with Gauthier as our guide, being the local that he is. Time was of the essence, though, so we packed up our caravan and headed to Javier’s homeland of Spain.


Putting in the hallways of hotels, bigspin boardsliding down rails.  All in a day’s work for Eldridge, the Puff Tuff TM. 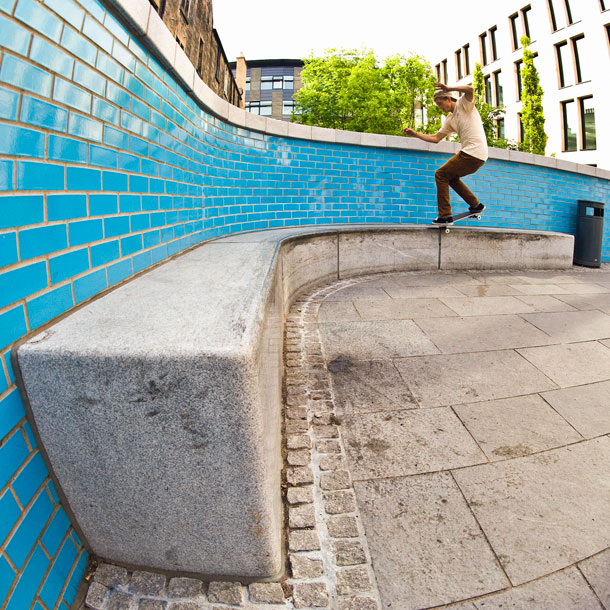 Josh Matthews nosegrinds around the horn-o-plenty, where many skaters got shit-whipped. Click image to enlarge.

Oddly enough, we had more sunshine in the UK than we did in Spain. Our first two stops were Bilbao and Javi’s hometown of Vitoria, both amazing cities with lots to offer—but we ended up settling for some slippery skate sessions in the drizzle. Our last stop of the trip was Madrid, where we endured more rain, but also got in a few really good days of enjoying the city’s sites while Javier and his crew played flamenco guitar at the many plazas. Early in the morning on the final day, a few of us ventured out to a concrete bowl on the outskirts of the city. We got a bit lost on the way, but Rattray was pretty confident with his Spanish, so when he spotted a few school children walking down the sidewalk he poked his head out of the van to see if they might be of some assistance. It turned out that the literal translation of his question to the kids was, “Hey boys, do you know where the park is?’’ This coming from a group of foreign men in a large van seemed a bit strange, to say the least. The kids didn’t seem to pick up on the unintentional connotations of John’s question, and they actually did know where the skatepark was. We had a little session at the park before getting rained out and heading back to the city. Kevin was starting to feel good again after recovering from an ankle injury suffered at the beginning of the tour and ended up getting one of the most memorable tricks of the tour that evening, giving us all a reason to celebrate.


Not afraid to attack a spot (or a jar of weed), switch front shove over and out. Madrid, Puff Tuff First Member Kellen James.

With the commencement of our final session in Madrid, we went out for one of the biggest feasts of the trip. There must have been 30 of us at dinner that night—somehow choosing an Italian meal to celebrate our time spent in Spain, France, England, and Scotland. But no matter the type of food, with that many people all together at once, Scuba felt it was necessary to give a toast to our journey.  He stood up in front of us all as we looked into each other’s eyes, raised our glasses, and toasted, “Salud!” The trip was complete, and the next day we went our separate ways, back to our respective lives, waiting for the next opportunity to do it all over again. 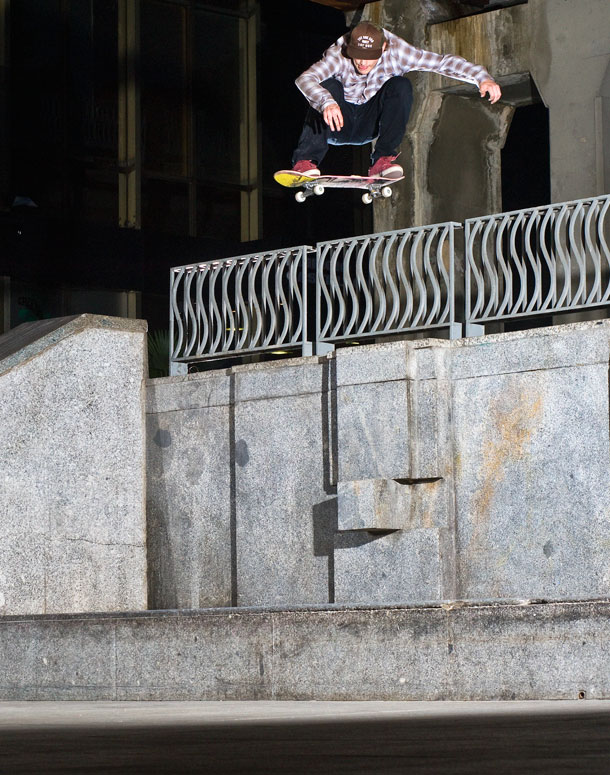 Kevin Terpening met up with Tom Brokeoff on the first few days on the trip. Fueled on cigs and brews, last day leap up and over on a calorie high.

Watch the To Europe with Love videos here: