In the beginning, there was no skate stoke. It is a powerful gift (and some say curse) bestowed to Earth after escaping to our planet from a higher dimension. In the material world, when you go skating, it’s just you and the ground beneath your wheels. In reality, there is a complex interplay with the Skate Gods every moment the urethane is spinning. They have a sheer disregard for mortals who do not partake in their sacred activity. Yet those who do stand atop the cherished vessel are both blessed and condemned in equal measure. Pray to the wheeled plank and bow to your masters... 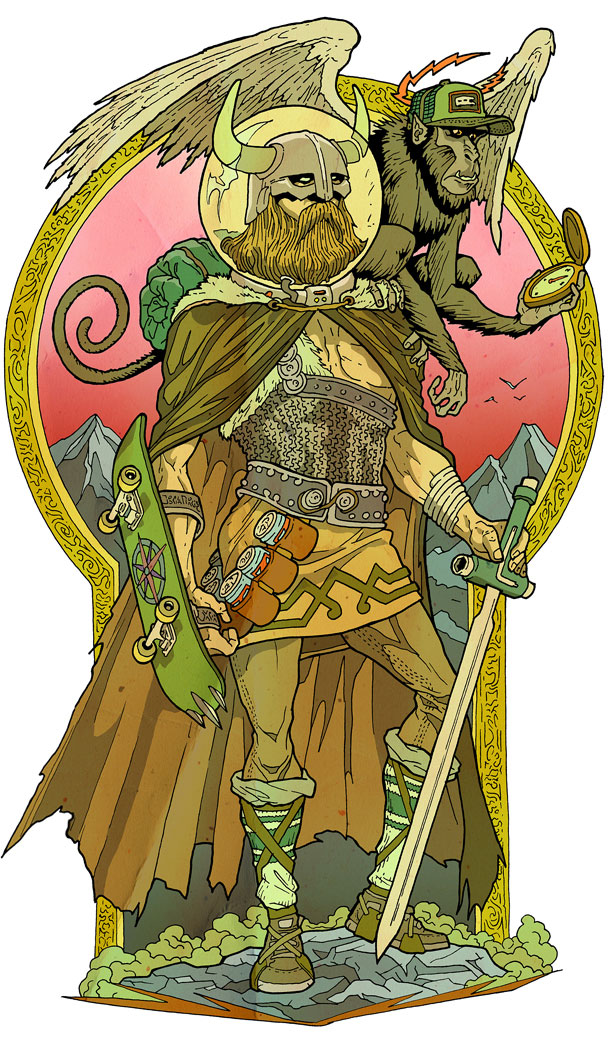 The Patron Saint of Road Trips. He oversees the traveling skater and brings bust-free adventures, new friends, and slumber free of bedbugs. Alas, even he can't prevent snoring and foot odor. He glorifies those who quietly face adversity and curses whiny, mark-ass Busters. A space-monkey serves as his G.P.S. (Galactic Provider of Spots). He cares not whether one books a plane ticket to Barcelona or simply explores every alley of their hometown. He is concerned only that his disciples seek out majestic new terrain. 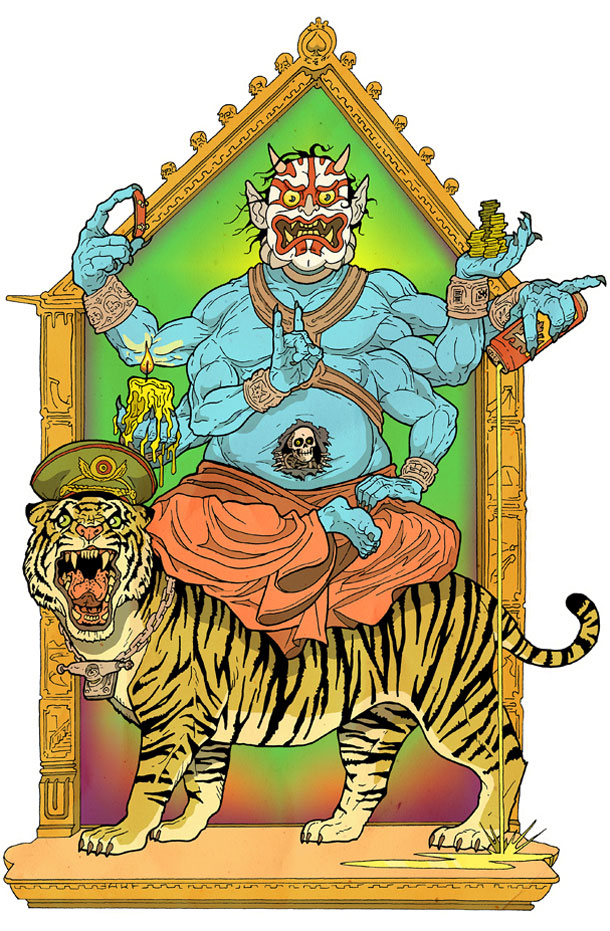 Without a regular sacrifice to this altar, the earnest skater falls to the rank of the phony. Beware to those who attempt to fool his eye, for a board stashed away in a garage or closet is blasphemy. He sees through all facades and knows that your ankle is fine, you could easily skate today. Excuses abound: couch gravity, game console, or other such blather—yet they melt under his scrutiny. The day one proclaims "I used to skate..." that person transcends from poser to infidel, and shall escape the Annihilator's wrath. Yet, that declaration is its own punishment enough. 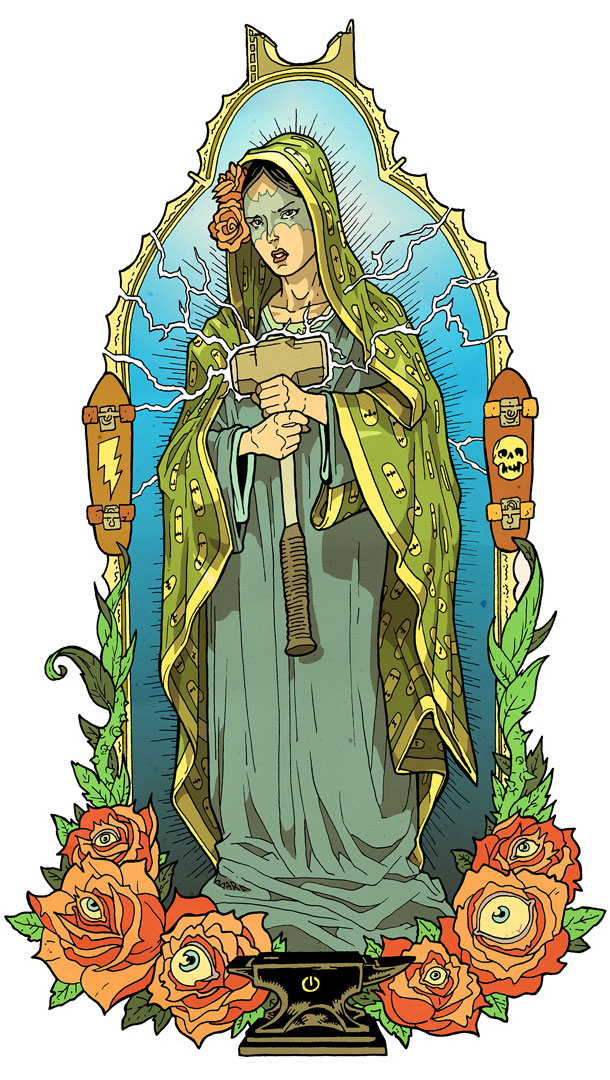 Her hand guides all who attempt new tricks, for she knows no two roll-aways are the same. She is the foe of stagnation and the crucible of skate evolution. Without her, nothing is attempted, nothing is gained. She soothes those who pursue tech progression and rewards them with a bountiful bag of maneuvers. She grows weary from that same mini-ramp line you've been doing for years, for it is now mere choreography. 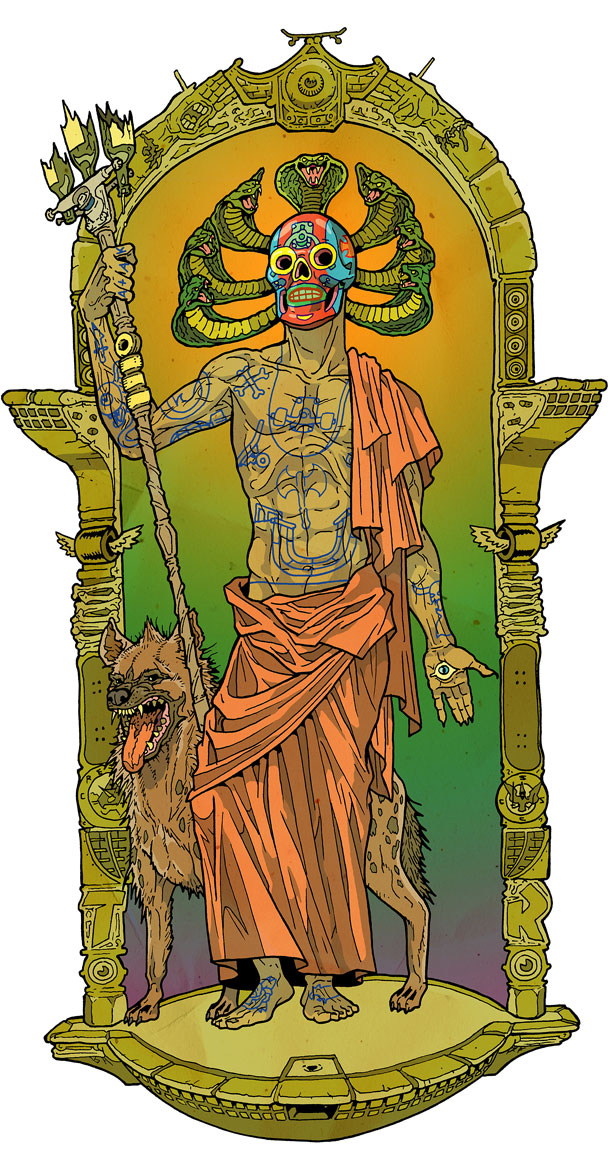 Some days are mellow and yield no more than slash grinds and mere manuals. Yet other days burn bright with gnar. Behold the gatekeeper between these two realms; the fire incarnate in every skater. Immolate in his name, and he will possess you to skate. He is summoned only when the fear of slams recede, yet the pursuit of danger is willingly embraced. His dominion is speed. Take heed, no skater has withstood a total possession of his for very long. Except Cardiel.