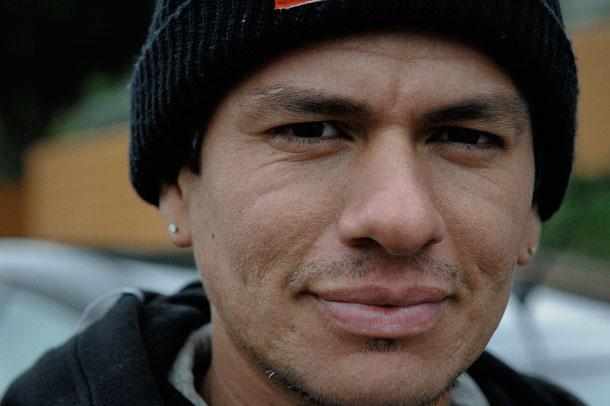 Why’s the LRG video called “Give Me My Money, Chico?”
The video started off travelling with the guys, going to spots, and pretty much betting people to skate.  Most of the time I win. ’Cause I know they ain’t gonna make the shit. It’s a little incentive. I wanna actually see the dudes make it, get ’em hyped.

You guys shot it around the world. You got big juice— everywhere I look it’s giraffes and shit. What about elephants?
That’s Mike V’s shit so we can’t do that.

What about rhinos? Africa? What is it?
It’s just roots. A giraffe on a skateboard, it’s just something new.

An original? I ain’t never seen nothing like that.
An original. That’s some gangster shit right there.

You’re from Serramonte, Daly City?
Well, I’m from Nicaragua. You know how I came here, right?

You couldn’t speak English?
Nah. None.

And you went to Embarco  right then.
Right then! No, I probably started skating a few years after that. 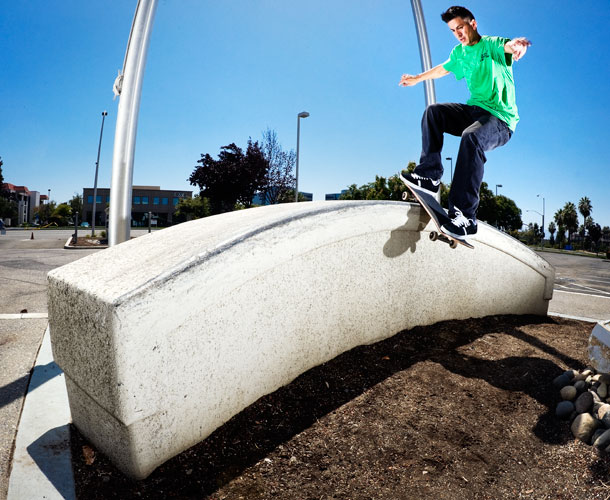 But you knew the Carroll’s since before EMB.
I knew Mike and Greg. Henry Sanchez and Mike, I used to go to school with them in Daly City.  I happened to live like, seriously, five houses away from Mike. He had the mini-ramp, so we’d go over there and skate with him and Greg. One time me and my boy Angelo were knocking on the door and they weren’t there, so we snuck in and skated the ramp—it turned out those dudes were at skate camp so we were skating the ramp everyday. And we thought they were coming home on Sunday, but they showed up on Friday. Greg was like, “Dude, what the fuck? What are you guys doing here?” Seriously, so pissed. “We’re just skating the ramp!” Mike was pissed at me for about a year. But he’s pissed about everything. I heard you’re pretty psyched on the new Thrasher video. Pretty proud.

You know how it is Cheeks, everything’s a collab.
Then it’s time to do the LRG/Thrasher/Chocolate collab.

But the LRG video’s just dropping. You’re gonna do two videos  in two years? I hate to say it, but it’ll be four.
Seeing how long it took to get the Lakai video out, I’m hoping we have that much time.

That was the last of the big videos. Now it’s straight to the ’Tube.
The ’Tube is killing us.

The Internet is killing skating because people want to talk shit, but other people get really frustrated about the comments. It trips me out because skating is so big now; I see it when I’m at the park with the kids.
I see you there at 8 in the morning. Shredding, dude. I’m like, “Wow, Jake is a trooper.”

You’re pretty good with the kids, too. “Here’s a sticker, let’s play a game of SKATE.” That’s what it takes. Those moments when I see the kids hyped on skating, it makes me feel like we all did it right. It’s not something fake. It’s real. Skating will teach you a lot.
When I was coming up, I remember  Jim Thiebaud giving me a board. I was so grateful; I still remember that shit to this day.

What board? TG?
No, even before Real. It was an SMA board, the one with the superhero on it. The Punisher. I was just skating and he was like, “Here.”  Just took it apart and gave it to me. I’m still so thankful for him doing that.

I have those memories too. I remember what certain skateparks smelled like, buying boards, thinking about the boards on the wall. Skateboarding is a special thing that has to be passed on from generation to generation. That’s why we stuck with it.
But what trips me out are kids nowadays, kids at the demos asking for things: “Yo, lemme get that!” It was never about that back in the day. I remember going to the demos just to see dudes rip. It was never about, “Lemme get a board! Lemme get your hat!”

Well, we created that whole society. Where TMZ and everyone else in the world is saying shit. It’s like, “Well you ain’t cashing the checks, fucker. Shut up.” Look at Tiger Woods. We create this billion dollar athlete and then we just drag him down through the mud, just to watch this dude crumble. That’s America. And then when he wins again? “I was backing that dude all the time! I wasn’t talking shit, I didn’t tell no jokes. I know that dude. He’s hella funny.” What’s the best place you travelled while filming for your new vid? Shanghai?
Yeah. We went to Shenzen—China has some good spots. I’ve been out there five times.

Did you backside nollie heelflip that  brick gap?
No, Silas did. I can’t use it now… Nah, I didn’t even do it.

As it turns out, in your interview in the new mag, you’ve got a nollie  back heel.
That’s my go-to. Nollie heel is one of my favorite tricks. I was talking to Diego Bucchieri, and he said that in Argentina they call nollie back heels Chico flips.

See? I used to call backside nollie flips on flat banks the Coco flip. Mike Carroll does a really good nollie flip, too. So how many shoes have you had now?
Maybe four. Not too many.
But the shoe checks pay for the family.
Dude, the shoe checks’ll buy me a mansion in Nica.

A mansion in Nica! By the beach. And when you go on a skate mission there you bring Danny Montoya and all the people who look just like you?
All Latin people, man. Rob G, Danny Fuenzalida, Vincent Alvarez…

Vincent Alvarez is hot as fuck. He’s one of my favorite skaters.
Yeah. We’re lucky to have him. We’re so psyched. He skates everything, man. Everything. Every spot that I took him to in Nica, he shut it down.

That’s your money man. The Chocolate vid is coming out this year?
Probably Summer, I’m hoping. As soon as we’re done with the LRG thing I’m getting  to it with the Chocolate video. I love working, man. I love it. I love traveling, and I love  skateboarding. And now I’m doing that shop in Nica, blowing up skateboarding for the  kids out there.

Sheckler did that—he got a foundation. The Ryan Sheckler Foundation.
I’m about to do that too.

You fixin’ to do that too? Write some tax money off!
I want to do that, the Chico Brenes Foundation in Nica. It would be cool to  get product from all my sponsors and help  kids out down there. It’s a third world  country, man.

It’s like what you were just saying  about Jim Thiebaud giving you a board, and how blessed you felt. Like, “Wow, can you believe that I just got this shit  for free?”
Sal Barbier also hooked me up back in the day. He gave me the H-Street board with the Kings graphic.

Kings? It was a Raiders board.
Wasn’t it Kings? It was Raiders, then.  My bad. I was so psyched I didn’t even want  to set that board up. He gave me mad  H-Street gear.

He had the backside noseblunt on Carroll’s ramp. It was a sequence in a Spitfire ad.  Does Nica have a skatepark that’s worth a fuck now?
No. I’m gonna do that next.

Build a skatepark that everybody can have. Some of that shit’s looking pretty budget.
What do you expect? It’s the third world. If the California skatepark dudes want to come down,  I’ll buy them a ticket and give them a place to stay if they want to help out and contribute to building  a buttery-ass plaza. I can’t pay them… Tony Hawk, come on. Help me out over here.

You can’t pay them yet. That’s all you gotta do. Ask him. He’ll be happy to help you.
I gotta get you on a trip. Let’s go to Nica. I’m going in February.

I can’t go right now, but I’d love to get on a Chocolate trip. What town is it in Nicaragua?
Managua.

That’s the capital? There’s volcanoes  there, right?
We have beautiful volcanoes. It’s tight. I love it.
What you should do is set up a skate camp there. You could bring people down and immerse them in the culture. That way you could show your side of it, and then bring the Nicaraguan kids to America…
Yo, it’s all in the plan, Jake. Small steps, though.

How many babies you got now?
I got 20 babies. Like Karl Watson.

He was at Bust or Bail. Sheckler told me that was the best day of his life in skateboarding.
No way. 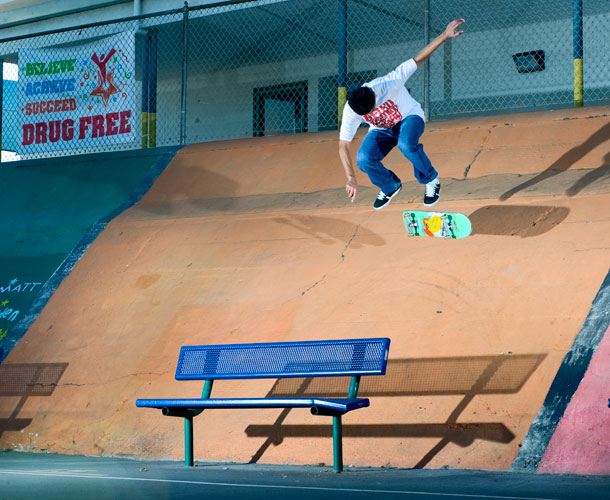 What kinda car you got?
A Ford Pinto. On rims. Twenty-twos.
You wanna give big props?
Everybody in the SFC.

You can never fade SF. People tell me all  the time—I see them around the world— “Yeah, I did SF for a couple years.”
And then you ask them where, and they say  “San Mateo.” I can’t claim SF because I’m from  Daly City. My girl’s from San Francisco, and she clowns me every time. She puts me in check: “Oh, what part of SF are you from?” “Uh… Daly City.”

Last call right here.
Shouts out to LRG, Chocolate, DVS, Thrasher, Autobahn, Indy, and everyone who’s had my back since I first crossed the border.

And you’re gonna go back across that border and be a king when you get home.