Check out the article from our October issue celebrating 15 years of Fourstar, where Eric Koston and Guy Mariano are interviewed about the brand. Click any spread to enlarge. 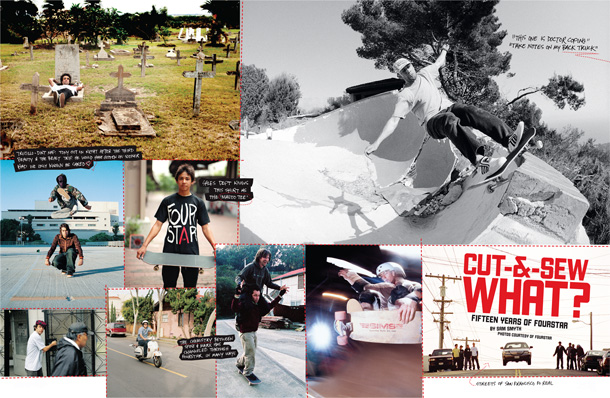 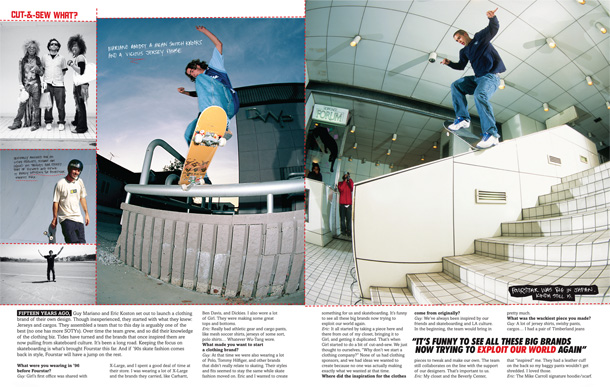 Fifteen years ago, Guy Mariano and Eric Koston set out to launch a clothing brand of their own design. Though inexperienced, they started with what they knew: Jerseys and cargos. They assembled a team that to this day is arguably one of the best (no one has more SOTYs). Over time the team grew, and so did their knowledge of the clothing biz. Tides have turned and the brands that once inspired them are now pulling from skateboard culture. It’s been a long road. Keeping the focus on skateboarding is what’s brought Fourstar this far. And if ’90s skate fashion comes back in style, Fourstar will have a jump on the rest.

What were you wearing in ’96  before Fourstar?
Guy: Girl’s first office was shared with X-Large, and I spent a good deal of time at their store. I was wearing a lot of X-Large  and the brands they carried, like Carhartt, Ben Davis, and Dickies. I also wore a lot  of Girl. They were making some great  tops and bottoms.
Eric: Really bad athletic gear and cargo pants, like mesh soccer shirts, jerseys of some sort, polo shirts… Whatever Wu-Tang wore.

What made you want to start  a clothing brand?
Guy: At that time we were also wearing a lot of Polo, Tommy Hilfiger, and other brands that didn’t really relate to skating. Their styles and fits seemed to stay the same while skate fashion moved on. Eric and I wanted to create something for us and skateboarding. It’s funny to see all these big brands now trying to exploit our world again.
Eric: It all started by taking a piece here and there from out of my closet, bringing it to Girl, and getting it duplicated. That’s when Girl started to do a bit of cut-and-sew. We just thought to ourselves, “Why don’t we start a clothing company?” None of us had clothing sponsors, and we had ideas we wanted to create because no one was actually making exactly what we wanted at that time.

Where did the inspiration for the clothes come from originally?
Guy: We’ve always been inspired by our friends and skateboarding and LA culture.  In the beginning, the team would bring in pieces to tweak and make our own. The team still collaborates on the line with the support of our designers. That’s important to us.
Eric: My closet and the Beverly Center,  pretty much.

What was the wackiest piece you made?
Guy: A lot of jersey shirts, swishy pants, cargos… I had a pair of Timberland jeans that “inspired” me. They had a leather cuff on the back so my baggy pants wouldn’t get shredded. I loved those.
Eric: The Mike Carroll signature hoodie/scarf. 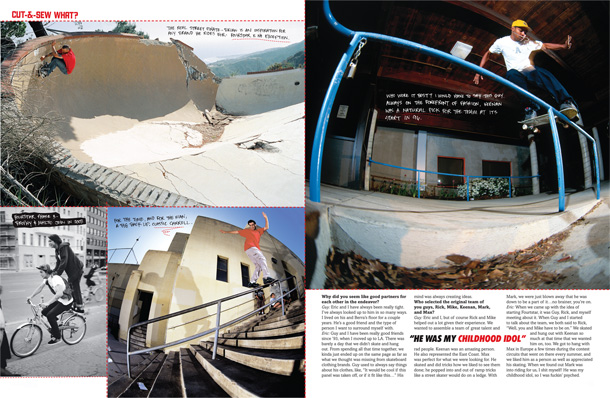 Why did you seem like good partners for each other in the endeavor?
Guy: Eric and I have always been really tight. I’ve always looked up to him in so many ways. I lived on his and Berra’s floor for a couple years. He’s a good friend and the type of person I want to surround myself with.
Eric: Guy and I have been really good friends since ’93, when I moved up to LA. There was barely a day that we didn’t skate and hang out. From spending all that time together, we kinda just ended up on the same page as far as what we thought was missing from skateboard clothing brands. Guy used to always say things about his clothes, like, “It would be cool if this panel was taken off, or if it fit like this…” His mind was always creating ideas.

Who selected the original team of you guys, Rick, Mike, Keenan, Mark, and Max?
Guy: Eric and I, but of course Rick and Mike helped out a lot given their experience. We wanted to assemble a team of great talent and rad people. Keenan was an amazing person. He also represented the East Coast. Max was perfect for what we were looking for. He skated and did tricks how we liked to see them done; he popped into and out of ramp tricks like a street skater would do on a ledge. With Mark, we were just blown away that he was down to be a part of it…no brainer, you’re on.
Eric: When we came up with the idea of starting Fourtstar, it was Guy, Rick, and myself meeting about it. When Guy and I started to talk about the team, we both said to Rick, “Well, you and Mike have to be on.” We skated and hung out with Keenan so much at that time that we wanted him on, too. We got to hang with Max in Europe a few times during the contest circuits that went on there every summer, and we liked him as a person as well as appreciated his skating. When we found out Mark was into riding for us, I shit myself! He was my childhood idol, so I was fuckin’ psyched. 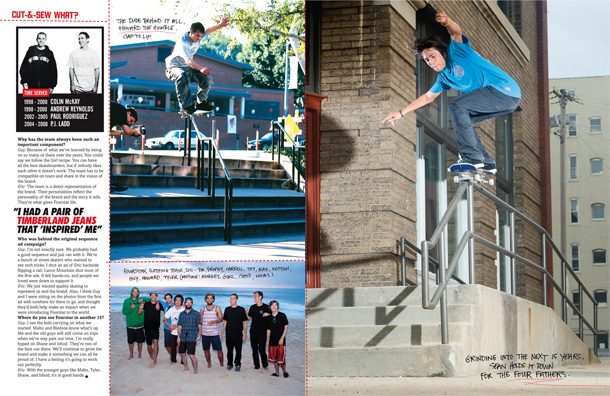 Why has the team always been such an important component?
Guy: Because of what we’ve learned by being on so many of them over the years. You could say we follow the Girl recipe. You can have all the best skateboarders, but if nobody likes each other it doesn’t work. The team has to be compatible on tours and share in the vision of the brand.
Eric: The team is a direct representation of the brand. Their personalities reflect the personality of the brand and the story it tells. They’re what gives Fourstar life.

Who was behind the original sequence ad campaign?
Guy: I’m not exactly sure. We probably had a good sequence and just ran with it. We’re a bunch of street skaters who wanted to see tech tricks. I shot an ad of Eric backside flipping a rail; Lance Mountain shot most of the first ads. It felt hands-on, and people we loved were down to support it.
Eric: We just wanted quality skating to represent us and the brand. Also, I think Guy and I were sitting on the photos from the first ad with nowhere for them to go, and thought they’d both help make an impact when we were introducing Fourstar to the world.

Where do you see Fourstar in another 15?
Guy: I see the kids carrying on what we started. Malto and Bledsoe know what’s up. Me and the old guys will still come on trips when we’re way past our time. I’m really hyped on Shane and Ishod. They’re two of the best out there. We’ll continue to grow the brand and make it something we can all be proud of. I have a feeling it’s going to work out perfectly.
Eric: With the younger guys like Malto, Tyler, Shane, and Ishod, it’s in good hands.
© 1981–2023 High Speed Productions, Inc.