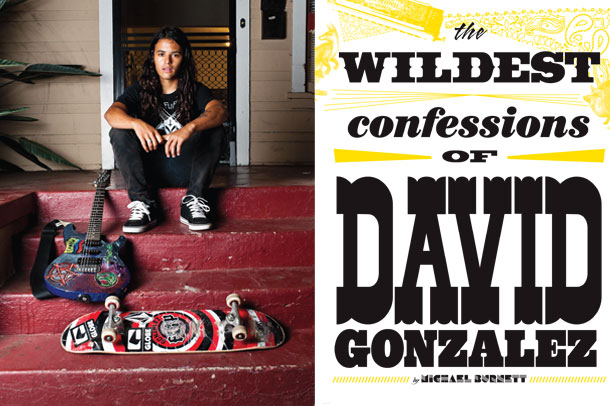 Are you feeling the pressure  on this video?
Fuck yeah, I am. A lot of pressure.

This is your first video part?
Yes.

Tell me what happened. Didn’t you have a video part done two or three years ago, but you kept growing?
I keep growing and my part was done.  At the time it was good.

How long ago?
I don’t know, like, two years ago. I had a fuckin’ six-minute part. But the rest of the team wanted to keep going. Maybe they wanted new riders for the video. It sucks.  I mean, it’s not “sucks,” but the old footage, they aren’t going to use it ’cause I look like a little rat. A small rat. Now I look like a big rat.

Were there any tricks from the little rat days that you wish you could include in the video?
That I can’t do no more?

Or that you don’t want to do it again or it’s at a spot far away?
Yeah. There was this spot in England. It was this big drop that no one’s done before. Someone did it, but I did it from the top—so it was like a weird spot. I went down and then I, how you say, slide on your back?

Baker maker?
Yeah, yeah, that’s it. But I have to do that because I have to slow down. There’s a hill before the big gap.

You had to slow down coming down  the hill?
Yeah, it was too fast before the big gap.

So you did a powerslide?
Yeah, powerslide—that’s the right word.  So I powerslide for like four seconds. It looks so good on the footage. And then after that  I ollie this massive gap to another bank. It was crazy but I look like a fuckin’ five-year-old kid there. You know? I’m still the same size now but my face got older.

You didn’t get any taller?
Not really.

You’re taller than when I first met you, for sure. But you haven’t gotten bigger in the last few years?
No, but my dick did. And my balls.

Do you think your balls are as big  as Ewan’s?
I don’t know. I never seen Ewan’s balls.

Me neither, but apparently they’re freakishly large.
He could entertain people. They go down  to the floor or something?

He says when he sits down on the toilet they go into the water.
Holy shit!

But just his balls. Nothing else.
Yeah, it’s like girls. Some of their boobs  are down and some are small.

So what’s going to happen with all your midget footage?
Disappear. Maybe when I’m old it can come out somewhere.

What did your family think of their teenage son showing up with this 30-year-old bald white man?
Everyone loves it. Everyone’s like, “Oh my God! The gringo! The gringo!” And Ewan’s all, “I’m not a fucking gringo! I’m from Scotland!”

Did he fit in down there?
Yeah. Everyone loves him. He’s been there five times, but he’s been there three times  for Christmas. Good times. Straight party.  We killed a pig and everything. 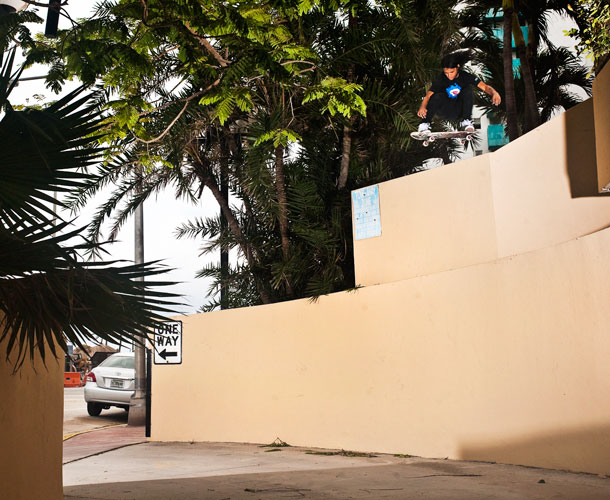 Did you bury it in the yard?
No. You’re kind of not allowed to do it anymore but we still did it. Good times when you kill the pig. One time we kill the pig and he’s on the fire and everyone think, “Yeah. He’s dead.” He was starting to burn and then he wake up and start running around the house with the fire and everything!

A pig on fire started running around  the house?
It was tight.

What did you do?
Everyone starts stabbing him on the  heart again.

Stabbing him in the heart?
Yeah.

And this is for Christmas?
Yeah, Christmas and New Year.

Oh man. Sounds like a nice time.  Were there any tricks for the video  that you didn’t get to do?
I don’t really plan anything, but I wanted to do some more tricks. I just want to keep going, but I hurt my ankle. It’s not bad. I hurt my ankle two weeks before the video is over, so I’m like, “Pffft! What am I doing?”

What do you do when you’re hurt?
Just hang out with my girlfriend at  my house.

And you live on your own now. How is it?
It’s too good. Naked. Walk around naked 24 hours a day. Anything. Get drunk naked.  A lot of times when I get drunk I just take  my clothes off.

Do you think your roommate Luan  will ever come back?
I hope so.

How much rent does he owe you?
Five months. I’m living here for five months.

And he’s never paid?
Never paid! Not even once! I’m sure he will pay me, but we’ll see. This place is pretty big for me. We rent it because it was two people. We can go half and half. But if it was just me maybe I get a smaller place that’s not so  much money.

Have you had any problems with the neighbors?
The neighbors right here are alcoholics so they don’t care if I make a lot of noise. And then the back one is pretty crazy. He’s like 60-year-old gay guy. The new Flip team manager, Andrew, he party with him not too long ago.

Yeah?
He calls me but I’m sleeping, and the next thing I heard the neighbor is fucking yelling at him, telling him to fuck off.

He got in a fight with the neighbors?
Yeah, the neighbor tries to fight but he’s  a really mellow guy. In the end, he party  with him.

So they decided not to fight and to  party instead?
Yeah. Fun times. And then he was too wasted so he gave him a ride home.

Was “The Wizard” the first song you learned on harmonica?
Yeah, “The Wizard.” You heard, right? I play that ’cause I can’t sing.

You can sing.
No way. My voice is horrible.

Maybe you just need to practice.
I just want to play the guitar. I’m not too good, but I’m learning.

Those are hard, right? Tony Iommi’s  no lightweight.
I play all “War Pigs” with the solo, everything. I can play like five songs. That’s how I want to play, like Black Sabbath.

What was meeting Lemmy from Motörhead like?
Oh, man. When I saw him I almost passed out. I didn’t know what to do. I was like, “What should I do? Should I pass out? Should I chill?” I decided to chill. He was amazing. He’s a really nice guy, and real rock ’n’ roll guy.

What are your favorite Motörhead songs?
I like “Whorehouse Blues” a lot, because of the harmonica. I can play that part. I like the whole album, Bastards.

Are you going to see AC/DC soon?
In one week. In Anaheim. The gnarly tickets are like $2,000. I got the $300 tickets. That’s pretty good. That’s not too far from Angus. I can’t drink, so I’m going to put the little bottles of alcohol under my dick and try getting in. I got like five or six.

In the first interview we did, you said that you’ve seen drugs and alcohol ruin the talent of many people. Have you changed your mind?
I can’t even remember saying that. I don’t do drugs. Sometimes I do drugs, but I drink quite a lot and I’m still exactly the same.

Watch out. You’re exactly the same until you’re 23 or 25. Wait and see!
What happens?

You start getting the party neck.  Get bloated and haggard.
Fuck that. I want to party forever, but if I feel myself getting like that I will stop. Definitely.

Will you stay here for a while?
I wish I could live in Colombia but it’s  not worth it. For now it’s better living here. Long Beach is good.

What do you like about it?
It’s got everything. It’s mixed with American, Latin—everything. Pretty much everyone here speaks Spanish. Lots of Mexican restaurants.

Did Kangaroo pass away?
Yeah. Same year as Shane. I want to make the video for them. I want to dedicate the first one for them.

First video. But you turned pro before the video?
Yeah. They ask me so I say yes.

Who’s next to turn pro?
Luan.

But he has to come back first, right?
Yeah. He has to pay me the rent first and then turn pro. I think he’s already pro. He will go to a pro contest and he will win. He’s that good, I’m serious.

Do you have any superstitions?
Nothing. I don’t care about any of that shit.

Geoff says he wants to die on his board. What about you?
Yeah, man. On the board.

While holding a guitar?
Yeah, man. And holding a bottle of rum. Straight to hell, boy! ’Cause I’m not going to heaven, that’s for sure.

Why not?
I don’t know. I don’t really want to hang out with my aunties in heaven. I will definitely want to be like Lemmy. I want to be 60 years old, long hair, all black, fucked up face, saggy balls, everything.

Are you scared to get a pentagram  or upside-down cross tattoo?
I got one. I got both of those already.

Now that your girlfriend is staying at your house, have you started using the toilet instead of peeing in jars?
Not really. Sometimes I go outside. Sometimes it’s too far away.

Do you know it’s an old American custom to pee in the toilet? Did you grow up with a toilet in your house?
Yeah. But still.

Do you ever take a shit in the yard?
No, no. I’m good. Maybe it’s going to happen, though.

What are your plans for the future?
The Globe video.

On the Internet?
No, DVD. That’s going to be good.

What else?
Sex, drugs, and rock ’n’ roll. Party every day. AC/DC concert.

Will you ever have a ponytail?
Fuck no. No way. I look like a fucking girl, normal. Think if I did that crazy shit!

Do you have some advice for  those messed-up kids out there that  read Thrasher?
Keep it real. Rock ’n’ roll. Don’t give up.
© 1981–2022 High Speed Productions, Inc.