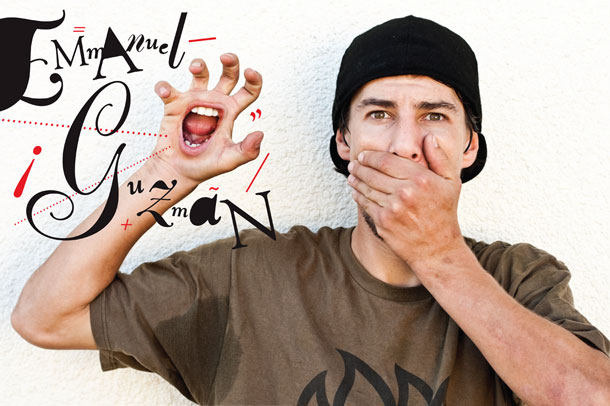 
"You have to learn to either shine it or grind it."

Confidence and cockiness are completely different things. Cockiness is loud, brash, abrasive, and will only get a person so far—usually in over their heads. The cocky always have something to prove, and that’s where the two differ: Confidence has nothing to prove. It’s loyal and reliable. Real confidence knows that it can finish what it starts and roll away. Eman is pure confidence, and the way he skates shows it: Fast, really fast, and powerful. Maybe this confidence comes from having grown up in some of the less-scenic parts of Santa Cruz, California, on the East Side amongst the Vatos, surfers, kooks, trannies, tamale ladies, ice cream trucks, and three older siblings who didn’t allow cockiness as an option. Ladies and gentlemen, Emmanuel Guzman.

Do all professional athletes break  their cigarettes in half or is this something you get to do under the  big tent of skateboarding?
It’s a personal decision, especially when  I smoke American Spirits. I really like  these cigs but they take too long to burn  so I expedite the process by breaking the tip off; then I’m almost done before I know it. And then you only feel half as bad.

Do you think that one day you’ll have  to make some serious decisions  between skateboarding and your backgammon career?
I could see it happening. I’ve actually  been thinking about my chess career recently. I used to be in a chess club. You should know this; I’m a chess whiz. I just played my first game in a while—this guy challenged me to  a game at his house and I whooped him.

You beat me, usually, in chess. Oh usually?
Yeah, I beat everybody, usually. I’m good. 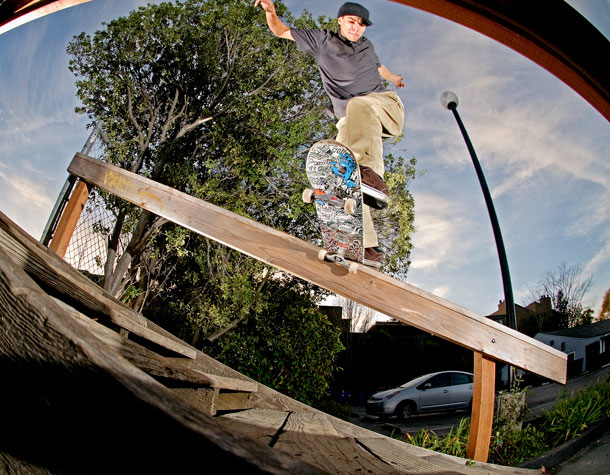 So what’s Mini Shaka?
Mini Shaka is our band. Noah Quale’s  on guitar, Carlos or Matt Carlen or whoever wants in is on drums, and I’m on vocals. I’m the one making noise screaming at people.

What are you going to sing about?
Screaming at people.

The taco truck is a legitimate business.
They are legitimate.

Pop shove-it, over the wall and into the bank

They’re bringing lunch to the contractors, the gardeners.
The ice cream man and the tamale lady are legitimate but they’ve just got a side hustle going on.

Like what?
I can’t speak about that over the airwaves.

Are they selling Tupperware?
We’ll suppose. But I support them.  Any flavor ice cream for a dollar.

Like those weird icy Mexican ones  that fall off the stick?
The ones that melt before you can  finish them.

I’ll take an IT’S-IT any day of the week. So, Merle or Waylon?
I could go Waylon but I’m going Merle. 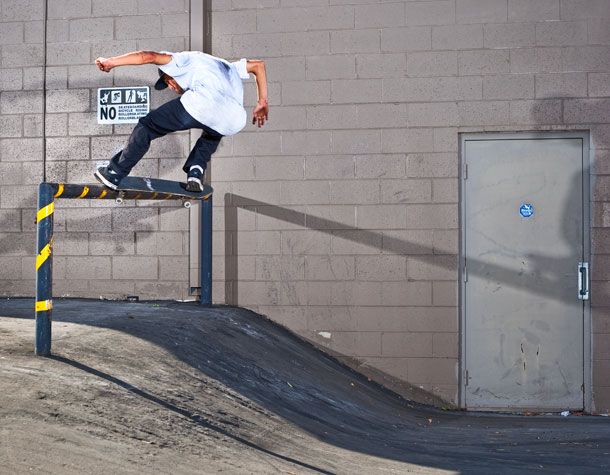 Well, Waylon’s dead.
Well then I’m going both. It doesn’t matter; all the greats are dead. I’m going Merle, Waylon, and Willie.

Johnny’s dead.
Kristofferson! He’s coming to town. I named my cat Waylon. Well, my brother did.
Do you think that we should preserve  the tradition of the local shop demo?
One hundred-percent. I think the tradition of doing shop demos is the most OG real form of showing your support to the mom-and-pops of the community, more than anything. The opportunity to do shop demos still totally stokes me out every time. Those are the teachers and everyday ordinary people who make what we do possible to present to the younger people. I’ve always been down. The first memories I have of any skate events were Bill’s Wheels shop demos, and those were the shit. Since then it’s always been something that I’ve been down for. I think it’s cool. Generally the shops that you’re doing demos for truly support your shit, and you should be happy to do those; I always am. As long as they’re legitimate skateboard shops. I don’t like doing demos for shops that are big, corporate, non-skate orientated, in it for the self-promotion and publicity for their shop, rather than the ones that are in it to stoke out the community and support what’s going on there. I like doing them for the true skateboard shops, not the skate/snow/rollerblade/BMX/scooter shops. A core shop is 100-percent skateboarding. 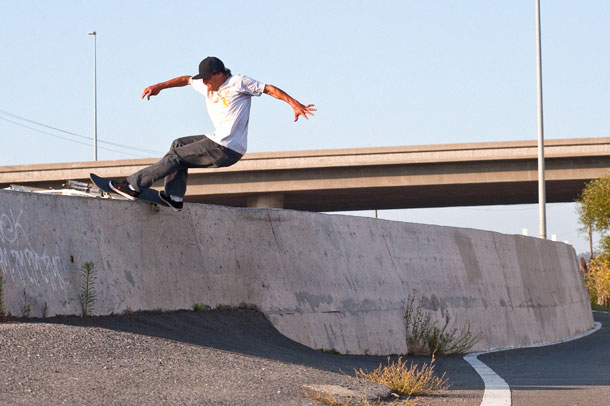 Like Bill’s Wheels.
Yeah. You don’t put your money into other eggs that may or may not hatch based on an investment, you put your eggs into a basket where they’re guaranteed to hatch and support something good. Support your mom-and-pop shops.

Bill wanted to ask if you feel like relating to the kids and being real with them is important to your success.
Yes. Without having a supportive fan base to back you, then who are you really trying to appeal to, you know? You can’t appeal to someone who doesn’t understand or relate to your life at least a little bit. Nine out of 10 times it’s going to be the kids that follow what’s going on in skating—but it’s also become this whole fantasy world where kids will support a name.

Or this scene, or this idea of a person.
Yeah.

What’s the idea that people have of  you? Like when a kid comes up to you  at a demo.
I don’t try to sell myself as a character; I don’t try and sell myself as this image. I think that my love of skateboarding and the things that I support in skateboarding—like we were saying, the mom-and-pop shops and not the giant corporate shit—is what comes across. Even though I’m involved with some pretty big brands I still have a family-type relationship with all the people I’m associated with. The kids can at least realize the value of loyalty, of being down for real-type stuff, and not the fantasy world that a lot of guys go out and try and portray skateboarding to be these days. It’s a trip to me that I even have any fans. I mean, I’m not shying away; I do try and promote my own things. That’s all I’ve got, that’s my living.

In through the out door–take the bank

That’s your job.
And it is as long as I keep up on it. The second I stop caring about what people fucking think I’m up to, I might as well not be doing it because that’s half of it, to let people know what you’re doing. It’s important to support the support; it’s huge. Like VOX—people that back your shit, back them. If kids are hyped on the fact that you just go out and skate and do your thing and they like your skating, tight. I’m stoked to give back to that type of community.

Do some of these questions blow you away? What do these kids ask you?
I’ve had kids ask me everything from if they could come and live with me to “I heard you did this,” or “I heard this about you,” just totally unfathomable imaginative stories that they’ve conjured. And you just have to answer the best you can.

Does it ever seem like kids are memorizing the things you’ve done,  just like memorizing baseball stats?
People in general—not even kids—will do that always, because they’re nerds. If anybody even comes up and speaks to me about something that happened, pretending like they know what they’re talking about, half the time I don’t even know what they’re talking about. You just got to go along with it.

Bg Things: Front board, kickflip over the rail to drop in. Believe

Did you ever do that?
For sure. I still remember seeing games  of SKATE between Israel Forbes and Ron Whaley in high school, and I don’t know  if they were actually doing the tricks that  I remember them doing. I still ask Ron about the tricks that they were doing in a game of SKATE, and he’ll be like, “I don’t fucking know.” But I remember Rick flips and all this crazy shit, first try every try. So I’m still like a little kid. I understand where the kids are coming from. I don’t remember a lot of the stuff I’ve done. I don’t even remember all the photos I’ve got in this interview. I had to ask Rhino! There are maybe nine, but only three stick out in my mind. Maybe that says something about me. Take it or leave it.

Is there a trick that you wish you  could do that you can’t?
Five-forties.

You think you could do 540s  if you wanted to?
Yeah. It just has to be the right moment  and I’ll just start fuckin’ huckin’ ’em. That reminds me of the 16 at  Harbor High.

It seems like you go  up to something with the full intention  of landing it, or you don’t do it at all. What goes through your head when you’re rolling up to shit like that?
Basically that. 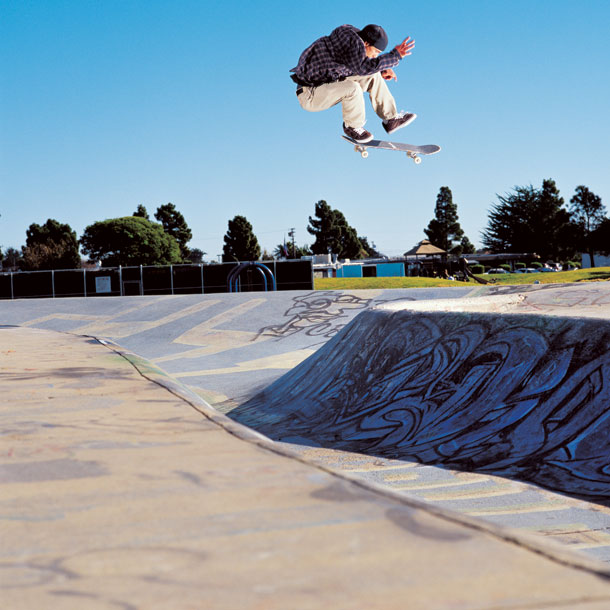 You have this gut feeling, like you  know your body knows how to do it?
When you’ve been to so many thousands  of spots in your life, you know which ones  feel good, which ones make you stoked,  which ones turn out okay, which ones don’t. You see the aftermath footage or photos and decide, “Rad, that was actually nice to do,”  or you’re just over it and you don’t want to have anything to do with it.

Do you care about ABDs?
If a spot hasn’t been hit, it turns me on way more. If no one’s ever skated a spot, it’s like, “Rad, I get freshies on it.” But sometimes you don’t care what’s been done. It’s one of my favorite quotes ever, Salman Agah: “‘Dude, it’s already been done.’ Not in this body.” Somebody might dog on that, but I truly don’t give a fuck. If I want to grind this but it was ground 20 years ago, I’m still going to grind  it because it’s there and I want to.

Fair enough.
Yeah, I think about that; I get sweated about that. It’s part of it. People are always going to tell you what’s been done somewhere, and  you have to learn to either shine it or grind it. Care or don’t care. I don’t care.