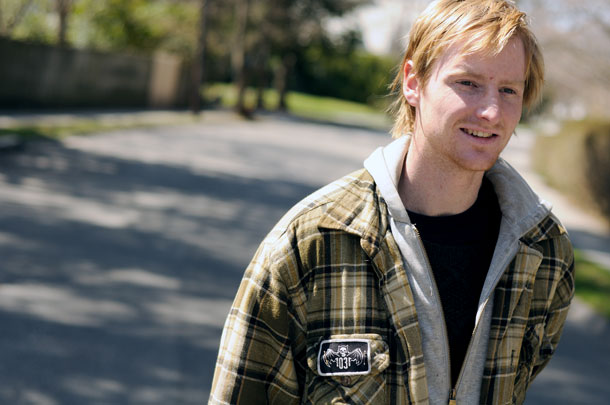 "It's never where you are–It's the people you're with"

I thought we’d start this out on a really positive note. Can you tell the world why we call you Fritzie baby,  in our best grandma-voice impression?
It all happened mid-way through our last tour. We were at a party in a small Jersey town. BK proceeded to get super drunk, and he put the moves on the mother who was hosting the party. She looked about  65 at best, with a gray mullet and a super-raspy Jersey accent—definitely a chain smoker. Apparently, as time passed, Rick Rossi stumbled into the room and proceeded to get down. She thought  Rick was me, and she kept moaning,  “Oh Fritzy baby,” or so the story goes. All I remember is Rick coming into the hotel room late that night furious that I didn’t save him from himself. I was half asleep and couldn’t figure out why he was so mad, until the next morning when the whole sequence of events came tumbling out of BK’s mouth. Apparently, BK got down with her that night too…at the same time. I think Rick was permanently scarred.

I’ve realized that you’re one of the worst spellers ever. You seem like a pretty smart guy; what happened in English class? Did you miss the day they taught you how to spell?
I don’t know why I can’t  spell, but it’s really not too  big of a deal.

"It looked like it had been found in the Titanic"

Why can’t you ever look people in the eye when you talk to them?
I don’t know why I tend to not look people in the eyes. I’m finding that it can be really detrimental to a conversation—especially if making an attempt to communicate with the opposite sex. So,  I definitely need to work hard on breaking that habit. It’s a bad one for sure; it might even be up there with the limp handshake. Maybe I don’t look people in the eyes because I’m afraid their eyes will lock with mine and they’ll come straight in for the close talk. That’s always bad.

Before we get into your skate questions, let’s tap into the sensitive Fritz. You’re really into painting.  What do you like to paint?
I enjoy it. I go through phases with artsy-fartsy shit, just like the music phases that people go through. When I started it was all about painting monsters and weird, trippy stuff. Over the last couple years it’s been mostly landscape paintings, but I think I’m about to embark on something new. I really want to get better at painting people, and incorporating human interactions into my work. I got an offer to be the teacher’s assistant for a figure drawing class in New York. I’ve been saving up money, working contracting jobs with my brother, and a couple of my childhood friends live down there. I’d also get to take the class for free, so I’m definitely going to try to do it. Right now I need repetition and practice more than anything else, so five days a week of free school will help with that. 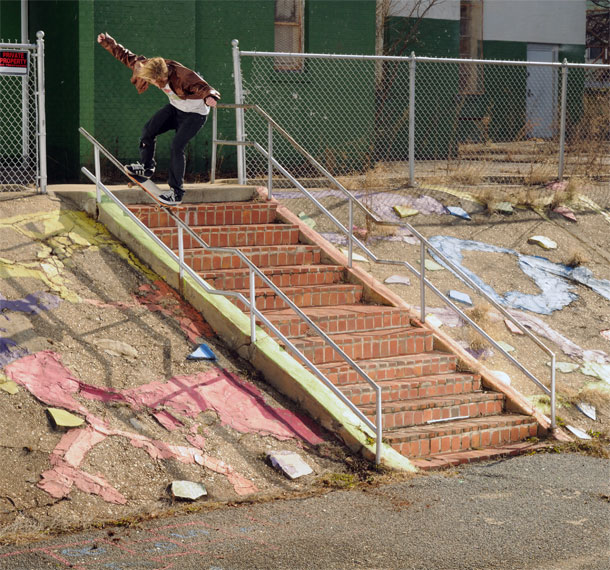 What do you mean by teacher’s assistant? Do you have to get naked and let people draw you?
No, I don’t have to get naked. I simply need to help set up easels, and have a stop clock to keep track of the time that the model poses for. Stuff like that.

You’re from Boston, but you travel quite a bit. Where are your favorite places to skate around the country?
America fucking rules! I’ve been lucky enough to go all around The States, bumming from couch to couch, and it’s always a blast. My friend Doug set the whole skate road-trip thing off. We drove cross-country in his van years ago, and had such a blast that it became sort of an annual “get out of the Boston winter” thing. If it wasn’t for Doug, I wouldn’t have ever met anyone outside of Boston, and traveling would have seemed un-doable. People are almost always thrilled to have someone new to shred with. It’s never where you are—it’s the people you’re with. A curb is better than the best pool if you’re with the right people. Off the top of my head, the last place I can remember staying was Raleigh, North Carolina, with Dan Murphy. It was incredible. I don’t know if I have a soft spot for the south—I am going through a major country music phase—but everyone’s always super nice, they know how to have a great time, and they have some serious spots. 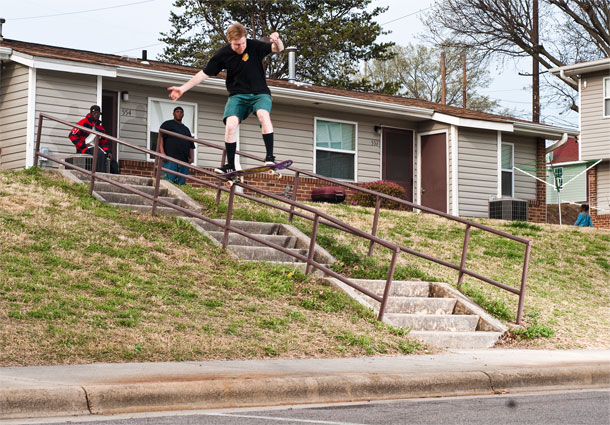 Living in Boston, how did you learn to skate pools so well? Street is a given,  but pools? On the East Coast?
Doug showed Max, Xeno, and me C-Bowl. We got hyped and started skating with all the old dudes like Kevin Day, Eastie, and Pat Murphy, which was sick. Shortly after that, Xeno got his hands on an electric pump—it was an old basement sump-pump that was heavy, steel, and covered in rust. It looked like it had been found in the Titanic at the bottom of the ocean. When everything was going smoothly it was silent and fast; however, when trying to drain pools, things don’t always go as smoothly as planned. Especially in our case, because we didn’t have the proper hosing for the pump. We never could commit to buying expensive piping for a pump that looked old enough to collapse at any minute. So we ran an eight-foot-long PVC pipe straight out of the pool, elbowed to another eight-foot pipe which made it to the deck. As long as you could keep the piping from falling out of the pump and spraying everyone, you were good to go. After that we went completely pool crazy, draining everything we could find. Xeno with a pool pump can be borderline scary. Patrick Kennedy and Kevin Day helped a ton. If the property didn’t have electricity, Elliott had a generator. I remember sleeping in the foundation of a demolished house in the rain after driving all night; we needed one person to be there in order to not leave the pump and generator alone. The other guys parked the car one neighborhood over, and walked back a couple hours later in order to avoid being seen. I’d always wanted to ride pools, so I’m psyched we were able to crack into that world.

"She looked about 65 at best, with a gray mullet"

Do you prefer skating pools or street  over the other?
If I skate a lot of street I get hungry for pools, and if I’m skating a lot of pools, I start to fiend for street. I get into whatever’s in front of me or around me at the time.

Do you still do all of your weird  exercises before bed?
I try to do all the exercises every night; sometimes in the morning, too. When I get  lazy about it my body starts to fall apart. 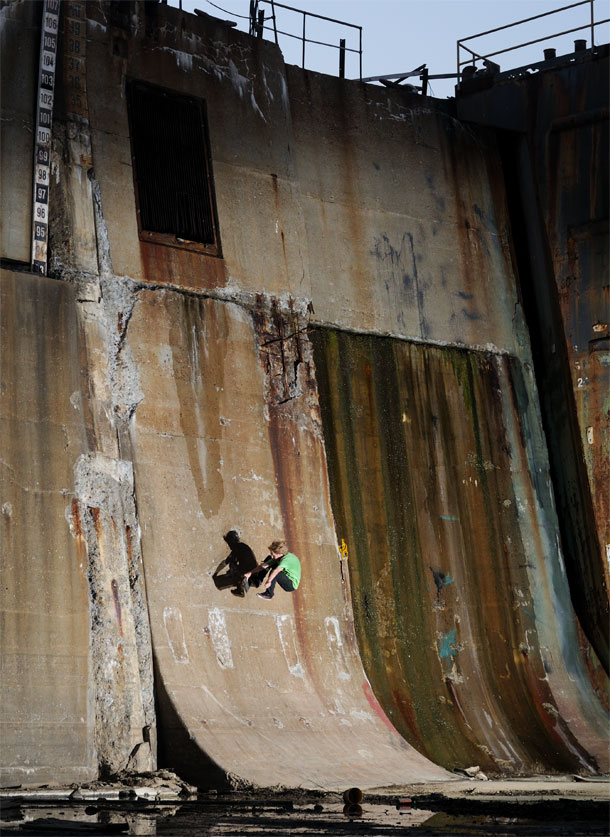 I’d really like to know where your good manners came from! Bad-attitude douche bags are a dime a dozen. It’s refreshing to skate with young dudes who can skate circles around me but are so modest and polite. Was it your parents, older brothers, or older skate guys who kept you in line?
I believe you are very much a result of the people and situations that surround you. I guess I’ve been around good people. Not everyone thinks I’m polite. My mom can’t stand me, a lot of the time. She loves me, but apparently I am  a “selfish asshole come-home pig.” She’s kind of right, but hopefully as time goes on I’ll think more about the people around me and less about myself. It’s in the nature of skateboarding and art to be selfish. You’re doing what makes you and your friends feel good, and fuck the rest. That’s a tough attitude to kick.

What’s spinning in your head now?  Near future plans or new trips?
Elliott, Xeno, and I are always going on trips. Lately I’ve been trying to finish this 1031 part—after that, I’m going to try to get to  New York to conquer this art class. OJ’s  gonna try to do a trip down East; hopefully  I’ll meet up with those dudes and get footage for the OJ video. Orchard’s working on a new video for next year, too.

Will you always be nomadic?  Ever want to settle down?
I’ll settle down at some point. I don’t  know why I keep moving around. I do  tend to wander.

What are you listening to these days? What bands are at the top of your list?
It was a lot of Plasmatics and Ramones,  but then I got into this serious country phase—completely obsessed. Right now Waylon Jennings and Merle Haggard are at the top of the list, but George Jones and  Gram Parsons are awesome. And I really like Dolly Parton; even Lee Hazlewood and  Nancy Sinatra have kind of a country thing going. Buck Owens rules.

I’ve noticed a lot of punk kids find country later in life, as I did. Did  you grow up on it, or did it come  more recently?
It was gradual at first, but then it took over.

There are lots of people out there who’ve helped you out over the years. Plenty of couches and floors slept on. Now’s your time to hook ’em up with some thanks!
Mom, Dad, Brother Will, Sister Laetitia, Brother Steaphen, Max. Everyone who’s been giving me free shit: Rhino Indy, Jetty, Alex at OJ wheels; Kristian, thanks for hooking up 1031. Johnny Roughneck  for the hardware. Everyone who’s built rad shit to skate.  Doug Moore, Rob and Iggy at Attleboro, Sloppy Sam for all the parks, Elliott and Chris for filming, Xeno, everybody who’s helped me with video and photo projects. Orchard, Armin, Bro, Bagley. To Phelps, Burnett, and everyone at Thrasher keeping the printed mag going strong, thank you, and keep it up!