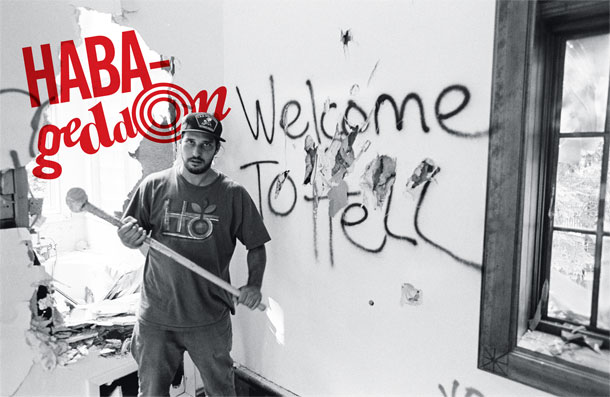 Check out Joe Brook's article from his East Coast destruction tour with Habitat, featured in our February 2012 issue. Click any spread to enlarge. 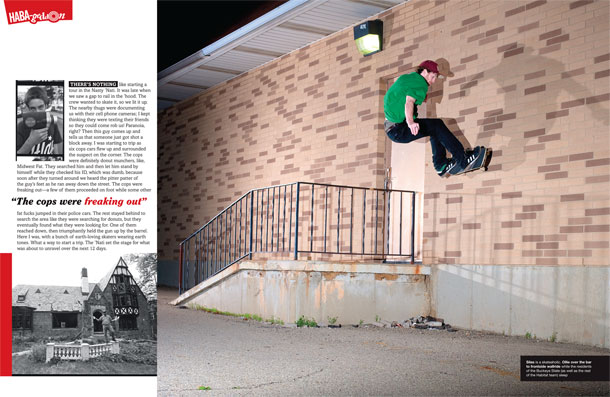 Silas is a skateaholic. Ollie over the bar to frontside wallride while the residents of the Buckeye State (as well as the rest of the Habitat team) sleep

There’s nothing like starting a tour in the Nasty ’Nati. It was late when we saw a gap to rail in the ’hood. The crew wanted to skate it, so we lit it up. The nearby thugs were documenting us with their cell phone cameras; I kept thinking they were texting their friends so they could come rob us! Paranoia, right? Then this guy comes up and tells us that someone just got shot a block away. I was starting to trip as six cops cars flew up and surrounded the suspect on the corner. The cops were definitely donut munchers, like, Midwest Fat. They searched him and then let him stand by himself while they checked his ID, which was dumb, because soon after they turned around we heard the pitter patter of the guy’s feet as he ran away down the street. The cops were freaking out—a few of them proceeded on foot while some other fat fucks jumped in their police cars. The rest stayed behind to search the area like they were searching for donuts, but they eventually found what they were looking for. One of them reached down, then triumphantly held the gun up by the barrel. Here I was, with a bunch of earth-loving skaters wearing earth tones. What a way to start a trip. The ’Nati set the stage for what was about to unravel over the next 12 days. 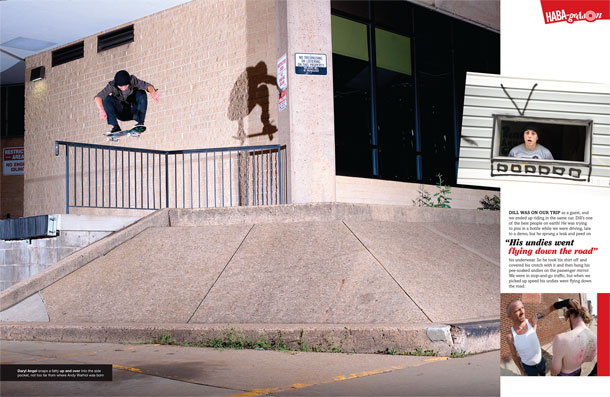 Daryl Angel snaps a fatty up and over into the side pocket, not too far from where Andy Warhol was born

"His undies went flying down the road"

Dill was on our trip as a guest, and we ended up riding in the same car. Dill’s one of the best people on earth! He was trying to piss in a bottle while we were driving, late to a demo, but he sprung a leak and peed on his underwear. So he took his shirt off and covered his crotch with it and then hung his pee-soaked undies on the passenger mirror. We were in stop-and-go traffic, but when we picked up speed his undies went flying down the road. 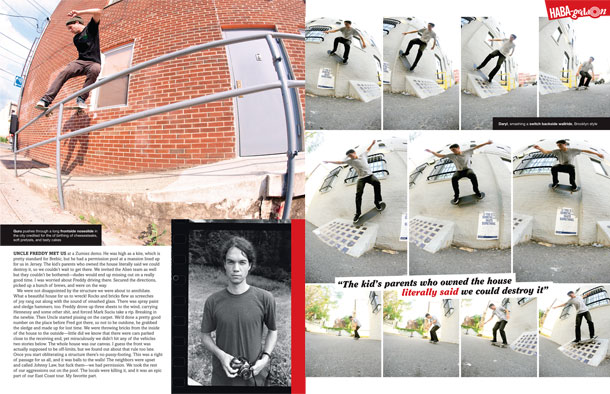 Left: Guru pushes through a long frontside noseslide in the city credited for the of birthing of cheesesteaks, soft pretzels, and tasty cakes. Right: Daryl, smashing a switch backside wallride, Brooklyn style

Uncle Freddy met us at a Zumiez demo. He was high as a kite, which is pretty standard for Brebic, but he had a permission pool at a mansion lined up for us in Jersey. The kid’s parents who owned the house literally said we could destroy it, so we couldn’t wait to get there. We invited the Alien team as well but they couldn’t be bothered—dudes would end up missing out on a really good time. I was worried about Freddy driving there. Secured the directions, picked up a bunch of brews, and were on the way.

"The cops were freaking out"

We were not disappointed by the structure we were about to annihilate. What a beautiful house for us to wreck! Rocks and bricks flew as screeches of joy rang out along with the sound of smashed glass. There was spray paint and sledge hammers, too. Freddy drove up three sheets to the wind, carrying Hennessy and some other shit, and forced Mark Suciu take a rip. Breaking in the newbie. Then Uncle started pissing on the carpet. We’d done a pretty good number on the place before Fred got there, so not to be outdone, he grabbed the sledge and made up for lost time. We were throwing bricks from the inside of the house to the outside—little did we know that there were cars parked close to the receiving end, yet miraculously we didn’t hit any of the vehicles two stories below. The whole house was our canvas. I guess the front was actually supposed to be off-limits, but we found out about that rule too late. Once you start obliterating a structure there’s no pussy-footing. This was a right of passage for us all, and it was balls to the walls! The neighbors were upset and called Johnny Law, but fuck them—we had permission. We took the rest of our aggressions out on the pool. The locals were killing it, and it was an epic part of our East Coast tour. My favorite part. 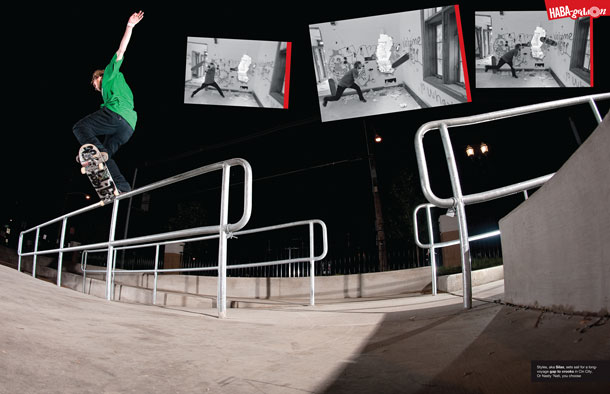 Styles, aka Silas, sets sail for a long-voyage gap to crooks in Cin City. Or Nasty ’Nati, you choose 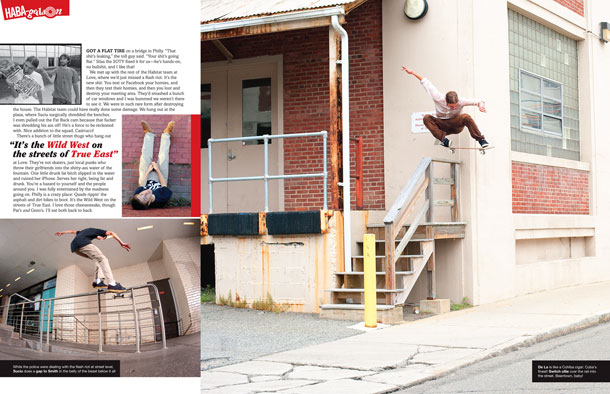 Left: While the police were dealing with the flash riot at street level, Suciu does a gap to Smith in the belly of the beast below it all. Right: De La is like a Cohiba cigar: Cuba’s finest! Switch ollie over the rail into the street. Beantown, baby!

Got a flat tire on a bridge in Philly. “That shit’s leaking,” the toll guy said. “Your shit’s going flat.” Silas the SOTY fixed it for us—he’s hands-on, no bullshit, and I like that!

We met up with the rest of the Habitat team at Love, where we’d just missed a flash riot. It’s the new shit: You text or Facebook your homies, and then they text their homies, and then you loot and destroy your meeting area. They’d smashed a bunch of car windows and I was bummed we weren’t there to see it. We were in such rare form after destroying the house. The Habitat team could have really done some damage. We hung out at the plaza, where Suciu surgically shredded the benches.

"It's the Wild West on the streets of True East"

I even pulled out the Fat Back cam because that fucker was shredding his ass off! He’s a force to be reckoned with. Nice addition to the squad, Castrucci!

There’s a bunch of little street thugs who hang out at Love. They’re not skaters, just local punks who throw their girlfriends into the shitty-ass water of the fountain. One little drunk fat bitch slipped in the water and ruined her iPhone. Serves her right, being fat and drunk. You’re a hazard to yourself and the people around you. I was fully entertained by the madness going on. Philly is a crazy place: Quads rippin’ the asphalt and dirt bikes to boot. It’s the Wild West on the streets of True East. I love those cheesesteaks, though. Pat’s and Geno’s. I’ll eat both back to back. 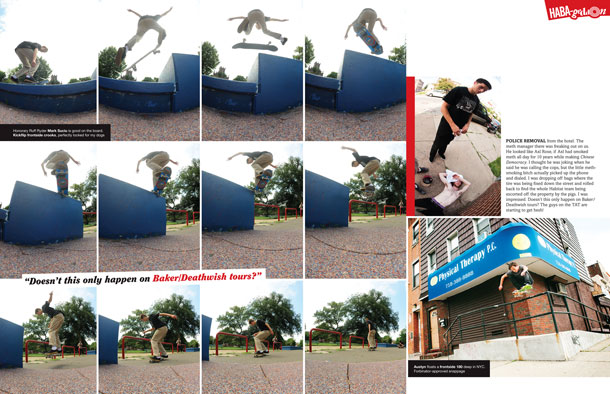 "Doesn't this only happen on Baker/Deathwish tours?"

Police removal from the hotel. The meth manager there was freaking out on us. He looked like Axl Rose, if Axl had smoked meth all day for 10 years while making Chinese Democracy. I thought he was joking when he said he was calling the cops, but the little meth-smoking bitch actually picked up the phone and dialed. I was dropping off bags where the tire was being fixed down the street and rolled back to find the whole Habitat team being escorted off the property by the pigs. I was impressed. Doesn’t this only happen on Baker/Deathwish tours? The guys on the TAT are starting to get hesh! 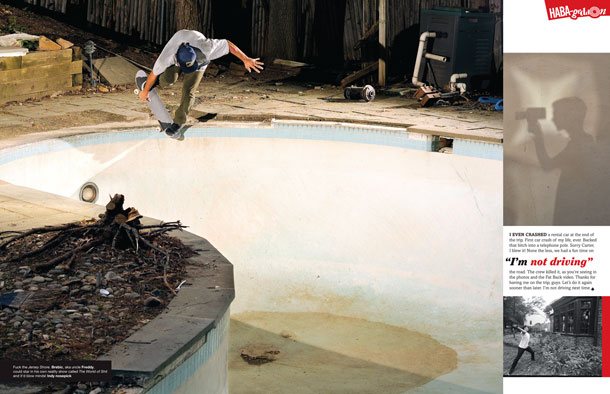 Fuck the Jersey Shore. Brebic, aka uncle Freddy, could star in his own reality show called The World of Shit and it’d blow minds! Indy nosepick. Photo: Xeno

I even crashed a rental car at the end of the trip. First car crash of my life, ever. Backed that bitch into a telephone pole. Sorry Carter, I blew it! None the less, we had a fun time on the road. The crew killed it, as you’re seeing in the photos and the Fat Back video. Thanks for having me on the trip, guys. Let’s do it again sooner than later. I’m not driving next time.
© 1981–2022 High Speed Productions, Inc.