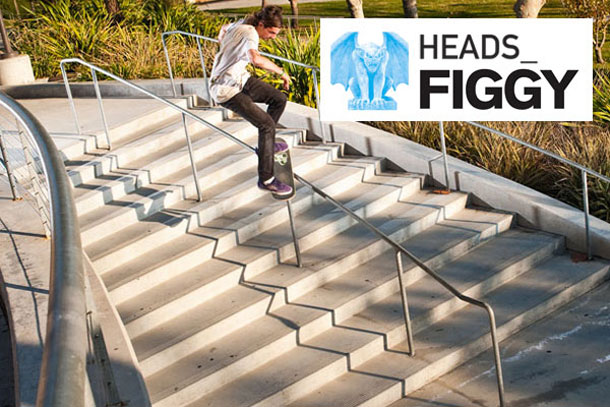 "It's turning into a crisis"

What’s your life story so far?
My life story so far? It’s been a fucking adventure-slash-voyage-slash- dream-come-true style. I was born in Riverside, out there in the ghetto— not really ghetto—until I was around seven or eight, and then I move to pretty, perfect Irvine.

What’s Irvine like? I’ve seen the kids that come out of there  and they look like Barbie dolls.
Yeah, everyone’s jacked. It’s all good. Have you seen Pleasantville? Where everything looks the same? The whole city looks exactly the same  and it’s fake. That’s exactly what Irvine reminds me of. It’s super sheltered, everything’s super nice. My parents put me in a good environment.  Mad homies. Chris Gregson and Collin Provost. Then I moved to O’Side.  Well, I didn’t move to O’side, but my girlfriend lives over here so I’ve been kicking it for the past couple years. Just got out on my own a little bit.

Did you graduate high school?
I did. I left regular school in 10th grade. To be honest, I almost didn’t finish but I broke my foot and that’s what saved me. At the end I broke my foot and got my work done, so I’m hyped.  But schoolwork is bullshit I’m never gonna remember.

What was your best subject?
Coloring books. The electives. All the stuff that wasn’t a core subject. I’m horrible at math.
I’m trying to get back into reading. I got a couple books for Christmas from my mom.

Have you ever read an entire book in your life?
Hell yeah. I’ve definitely read a few books, for sure. Right now I’m just reading books on bands. I read a Doors book and now I’m almost done with a 13th Floor Elevators book I got for Christmas. I remember when I was in school I read a bunch of Edgar Allen Poe poems. I had to read a whole book of his poems and do a bunch of writing about it. That was the last book I read in school that was pretty epic.

When did you get the nickname, Figgy?
It was way back, probably when I moved to Irvine. Everyone started calling me Figgy. “Hey, Fig.” It just kind of rose.

Are there other Figgys in your family?
Nah. I’m the only one. I just call my dad Felix and my mom Norma.

How do your parents feel about your path?
They’re pretty sheltered, but they know exactly what I’m doing. As long as I’m skating and not slipping up I’m OK.

What’s their biggest concern about you?
Probably drinking and smoking weed, but we’re mellow. We’re at a place of understanding, I think. We’re on the same level. We talk about it. They know what’s up. It’s all good.

Do you still live at home sometimes?
I’ll stay there every once in awhile. I’ll stop in to visit and have dinner,  then cruise down to Oceanside.

Do you still have your room?
Definitely still have my room, all my posters. I got a new guitar for Christmas and I keep it at my parents’ house. I’m too scared to bring it out anywhere ’cause I don’t want to fuck it up.

What’s the most guitars you’ve seen  on a skate tour?
Probably that Baker/Deathwish tour we were on. Everyone had guitars. On tours  I bring my Squier, and I’ve got a little baby Marshall amp that fits in my guitar case.  That’s my tour guitar for sure.

If you had to choose between clean clothes or a guitar for a trip, which would you choose?
My guitar, of course! I don’t like to go anywhere without my guitar.

What was the first song your learned  to play?
I took guitar as an elective in 7th and 8th grade, so I learned a bunch of chords and bullshit songs out of books. Then I quit during high school and picked it back up a couple of years ago.

Can you play Sabbath?
Fuck yeah. That’s all I try to learn. All the Sabbath songs are so epic. Tony Iommi, he’s  a legend.

What are some of your favorite  Sabbath songs?
Right now I like “Wheels of Confusion.” Probably “Sleeping Village,” that’s definitely  a good one. “Fairies Wear Boots.” All of them are pretty genius.

Do you fast-forward “Iron Man?”
I probably would now, just ’cause I’ve  heard it so many times and it’s kind of played out, but those solos are pretty buttery. David Gonzalez, we go over to his house a couple times a week—he’s got a Gibson just like me and he can play “Iron Man” with all the solos so good! He just turns on the amp and goes. It’s gnarly.

Are you done growing?
Dude, I fucking hope so! It’s turning into a crisis, dude! I can’t film on certain spots ’cause I’m too tall now.

How tall are you?
Six-four, six-five.

Are you taller than The Birdman?
I don’t know. I haven’t seen him in so long. But I think we were pretty even the last time  I saw him. 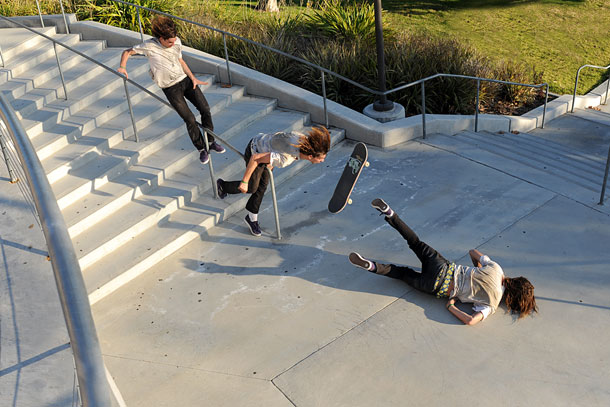 What size feet do you have?
Actually, I used to wear 12’s a few years  ago, but I had to cut back. They were so big, dude. My feet would just roll so easily ’cause the shoes were so big. I’m at 11 now.

So you smash your size-12 feet into 11’s?
Pretty much. When I put on some 11’s they’re tight, but after I wear them for a day they loosen up.

Have you noticed any changes in your skating since you’ve grown so much?  Can you ollie higher?
Dude, I have to struggle so hard to get  pop! There’s something wrong with me,  man. I don’t think I have as much pop as  I should.

Are you the tallest one in your family?
Hell yeah. I tower over both of my  parents now.

You were our first Lunatic Fringe.
Back in the Deville days. I was so hyped. I think those were the first photos I had. Man, that was the best thing Deville ever did for me, that’s for sure.

You had some rocky times in your early sponsorship days, right?
Definitely. Deville hooked me up with Powell, and when I wanted to quit and go to Birdhouse with Sumner and all those guys, it was kind of salty. Deville took me out to fuckin’ hammer spots for the year I was on Powell. Big-ass rails and roof gaps and shit. I didn’t know any better. I was down. Getting free boards and stuff. It was back when I was hanging out with D Loy and he was on Birdhouse. I started hanging with him and Sumner and those guys, and I decided I’d be better off riding for Birdhouse. When I went to Deville and Hoffart they were salty. Deville put all my footage up on the Transworld site and YouTube and all this shit. Basically, all these bangers I worked my ass off for, he just threw them out there without my name or anything. I called and talked to him and he was just an asshole about it. Now I’m older and things have changed. I’m not a little baby. No, Deville helped me out. He got me photos in Thrasher, so I can’t be too mad about it. It’s all good now.

Tell me about that outfit you’re wearing in your T-Eddy award.
Let’s dwell on this some more. First of all,  I want to say thanks for the award. I looked so good that it had to be publicized! Good looks!

So explain what you were dressed for.
We were about to drive 15 hours from  North Carolina. That was the last day of the Baker/Deathwish trip. Everybody was fried, ready to drive home. So I had to do it. Those were pajamas! That wasn’t skating gear.

Would you ever have a pony tail?
Nah. I dropped the shoelace, too.  I dropped all of that bullshit. I’m just going to deal with it. It’s way better now. 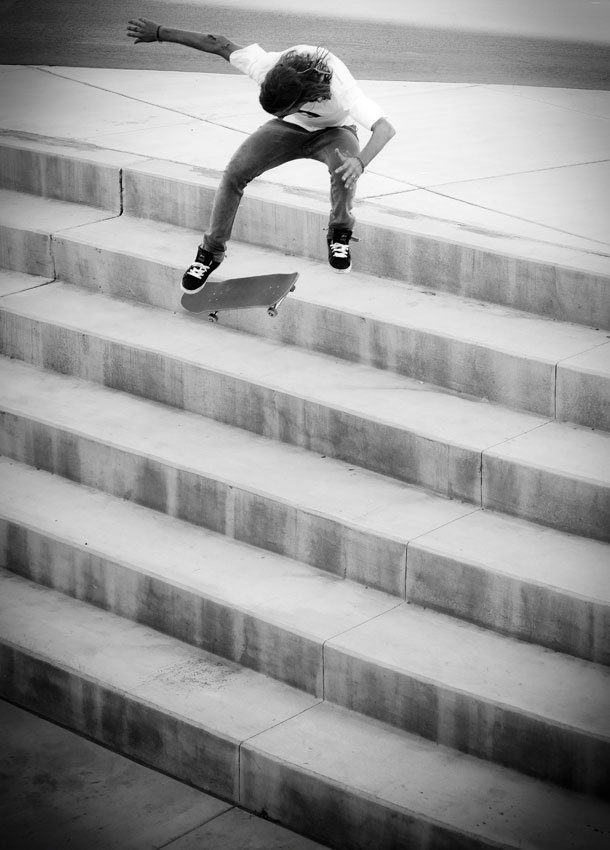 What were you good at before skating?
Nothing, really. I tried all the sports. My parents are athletes—well-trained, in-shape, gnarly athletes. My mom still runs marathons. Every year she’ll do a marathon. My dad’s a runner and cyclist. They tried to get me on that program when I was younger, but I just couldn’t handle it. If you run eight miles a day you can’t go skate after. That’s what I was doing in the beginning of high school. I ran cross-country. My freshman year, running eight miles a day, I could do it. But now there’s no way in hell I could do it.

Do you have to party to get on Baker?
Hell no. You definitely don’t. Look at Theotis! Perfect example. You just gotta hang out, see if you get along. It’s gonna work out if it’s supposed to.

What advice would you give to kids who want to do what you’re doing?
Keep skating. Do your thing. Keep it real.  If it’s supposed to happen it will. Try your best. Be yourself.

Who’s your roommate on the trips?
Jon Dickson just got on Deathwish, and  I’ve roomed with him on the last couple trips.

Jon Dickson is sort of unknown.
Silent killer. Fools don’t even know. So gnarly. He’s better than everybody on a skateboard. It’s insane. Fresh off the farm, man. Me and a couple homies went out to his farm in Illinois. Sixty-acre farm with mad forests and ponds and shit. Out in the middle of nowhere. There’s a tiny-ass slab of concrete behind his house that he learned to skate on. Then a shitty-ass metal skatepark that’s a 10-minute bike ride from his house. That’s all he had. That’s insane.

"I looked so good that it had to be publicized"

Would you ever date a girl who skates?
Fuck no! Exclamation mark!

Who’s the cutest girl who skates?
I know there’s some, but don’t most of them like girls? I’m not talking shit or anything, but  I think that’s their vibe. It’s hard to say.

Collin Provost and Chris Gregson can rip vert. Do you have any vert skeletons in your closet?
Back in the day when Chris and Collin  were still skating vert a lot, Chris had just gotten his camera, and I filmed a back grind on the vert ramp at Vans. It was sketchy and mob! I almost killed myself. That’s my only time on vert.

What’s your plan right now?
We’ve got a month and a half to film for Stay Gold, so everyone’s pretty much out there trying to kill themselves right now. It’s gonna be epic. Just keep it going until the very end.

Anything else?
I want to say thanks again for that wonderful award. I’m glad you could be there to capture that glorious day and my awesome outfit.

May 2010 cover boy, Justin "Figgy" Figueroa sets the streets ablaze in our inaugural offering of Hell on Wheels.