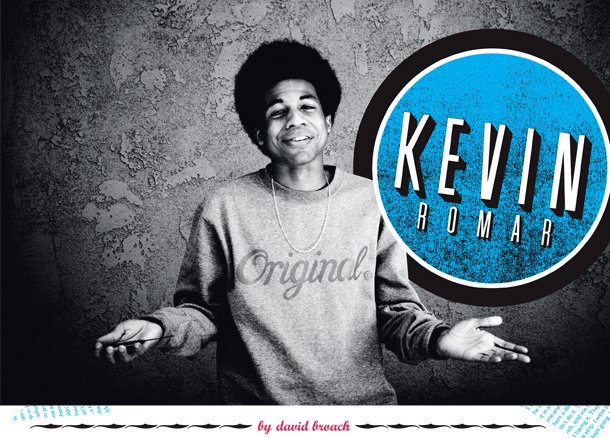 Do you use a pillow at night, or  do you just use your hair?
Most of the time I use a pillow.  A little fluffy one.

How hard is it to maintain a one- and  a half-foot Afro?
I go to the barbershop about every three months. They give it a little trim so it doesn’t get all crazy on me.

Where are we right now?
We’re in Cypress.

What the hell do you do in Cypress?
Nothing. Chill with the homies.

"I need to throw away my computer"

Why are you always smiling? Life isn’t that great.
Yeah it is! Everything is cool right now;  I’ve been enjoying life.

Are you the only person who shows up  to those raves?
Wait—who said anything about raving? 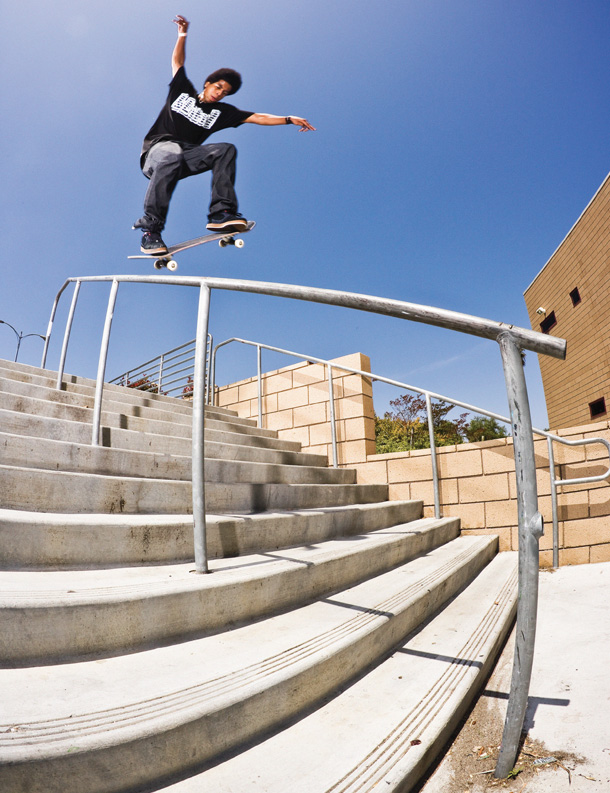 I heard you go to raves. I didn’t even know they had those anymore.
No, I don’t go to those. They’re too crazy for me.

You don’t go…anymore.
OK, OK. I’ve been to a couple! But my girlfriend likes to go, so I just go with her.

Do you guys dance with glow sticks?
No. We don’t do that.

I seriously didn’t think that raves  existed anymore.
Dude, they’re gnarly now. There will be, like, 100,000 people at one. It’s crazy! They aren’t really raves, they’re just big parties. They’ll have one at the Coliseum, and literally  100,000 people will show up.

"I lost my crew. All for one chicken strip"

Are there drugs?
Yeah.

Is there techno?
You know, it’s more like house music,  or electro.

Sounds like a rave to me.
OK. Kind of. But it’s not like that—it’s really more of a party.

I hear you’re on the Internet for an unhealthy amount of hours every day. How much time do you waste sitting around on the computer?
Like, the whole day! I spend so much time on that thing. I need to get off it and throw away my computer. Serious. A few hours at a time, spaced out through the day.

What are you looking at?
My Facebook and MySpace pages. Every time I click on one, there’s a new message  or a comment, so I respond. Random kids  and people I know. I feel like I have to write back. People take it too seriously if you  don’t respond.

Are you a Tweeter?
I just made an account last week.

What was the last thing you Tweeted?
“Waiting for David Broach to get here.”

"It's just a Tylenol"

No! Keep me off that thing! Weiss said you’ve been Tweeting about those KFC Double Down things.
Yeah! I got one two days ago, and I just Tweeted so much about those. I got the grilled one, then I got the crispy one. But I got to keep it crispy because the other ones are too oily.

Those things are so bad for you. That stuff is so fucked up, it made the national news every day this week.
Yeah, but they’re so freaking good! I like  a lot of chicken.

Three different people told me how much you like chicken, and now here you are talking about chicken. What’s your deal?
Fuckin’, that shit is the best! Everywhere  I go, if there’s a chicken spot, I got to stop  and get it. On this éS trip in Europe, we’d  been eating weird stuff the whole time.  I seen a KFC and had to stop. Went in and  got one chicken strip. All I wanted was one and I had to beg them for it—I tried to give them a dollar so I could just get one but they wouldn’t do it. They tried to sell me a chicken sandwich, told me to just take the bread off, but I wasn’t having it. They finally hooked me up with a free strip. I went back outside and everyone else had kept going. I lost my crew. All for one chicken strip.

What do you do when you’re not skating or raving?
I just kick it here in Cypress, or I kick it with my girl. She lives in Costa Mesa, but we’re tight, son.

Jared over at Bones was telling me that this is your first girlfriend, because you didn’t want one to get in the way  of skating for a long time.
She’s not my first girlfriend, but this is the first long relationship that I’ve been in. I’ve had them before. I just didn’t like them.

I thought for sure you were going to those raves to meet chicks, but I guess not.
No, I go with my girl because she likes them.

Does your girl go to get chicks at  the raves?
Nah, she’s not like that. I’ve asked her about it, though!

You never know about those house-listening people.
It’s cool, but I’m more down for rap.

We should talk about some skating stuff. You were hurt for a bit. What happened?
I’m back now! Woo-hoo! I was in Europe with éS. First day, first spot, skating this bump to flat in Cyprus. I left Cypress to go to Cyprus—it’s this island in Europe, right next to Israel and Turkey in the Mediterranean Sea. I went to do a trick and my back foot came off and rolled over the back edge of my board, and I was done for the rest of the trip. I was out for the whole two weeks we were over there. I tried to force it the last three days, but that just made it worse and put me back about two extra months. But I’m back on my board again now.

What else do you do?
I’m always watching skate videos.

Of course you are. Do you still buy  DVDs, or is this part of your daily Internet habit?
I used to buy the videos. Everything’s online now. I wish they had more DVDs; they’re way more fun. I just watched Weiss’ part in the  DC video. So good. It’s proper. He killed it.

The Internet is killing the media. Maybe not killing it, but changing it for sure.
I hope not! You always need the  new magazine.

Wait—what’s this? I just found an E tab on your floor! You are a raver!
What? Let me see that—no it’s not!  It’s just a Tylenol.