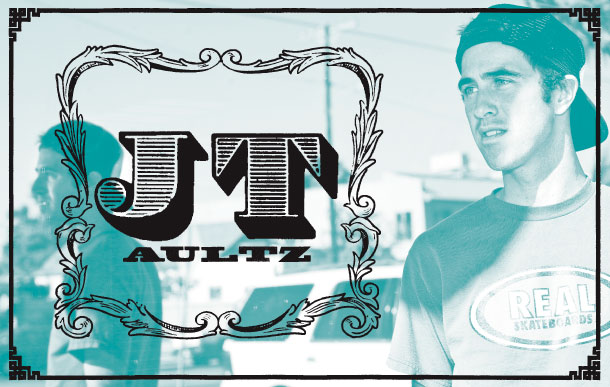 JT Aultz Interview
"I have more California pride than anything"

JT Aultz is pretty normal, aside from the craze that he puts himself through when he’s out skating. A sampling of the madness: Touching corners; touching the top of the rail; touching signs and windows along the run-up; hanging his front truck over the top stair, then turning his board around and hanging his back truck over the top stair; holding the board by both trucks with both hands; tapping his board on the ground; and offering up all his money in a bet that he won’t do another roll-up. See? He’s just a regular guy. He’s not a scumbag, he’s not an asshole. He’s not a weirdo. He skates a lot, as much as he can for being a new dad and husband. That’s normal, right?

JT, what are you up to right now?
Hey! Just hanging out with Damian Bravo at the moment. He’s staying at my house. We’ve been skating a bunch, going out pretty much everyday. It’s been good. 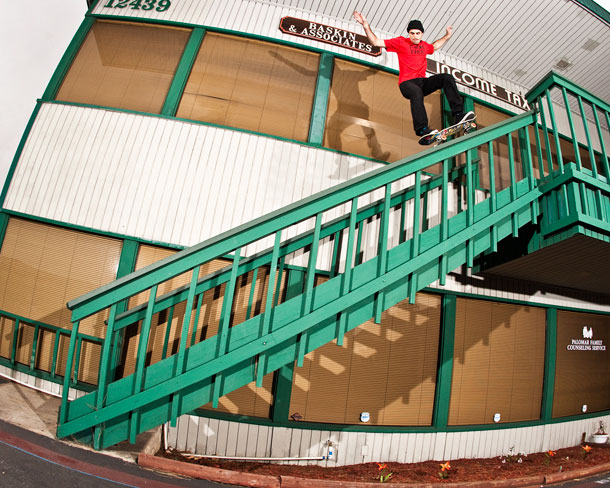 Frontside 50-50 on a wooden rail. Stick and you’ll pay. Click image to enlarge.

To someone who didn’t know both of you, it might be hard to imagine that you’re such good friends. Bravo, to me, is really hip-hop, and you’re very punk rock.  I always imagine the two of you driving in your truck from San Diego up to San Francisco, and Bravo’s just complaining the whole time about your music.
That’s hilarious. But Damian’s actually punk as fuck, when you consider the crazy conditions he’s in while working on those fishing boats in Alaska. But you’re right—he does talk shit on my music sometimes.

You’re originally from Burbank, CA. How did you get into skating? Who did you skate with when you were growing up?
I was born in San Diego, but ended up moving to Burbank when I was in the 3rd grade. I’ve always been into skating—I mean, for as long as I can remember, I thought skating was cool and I always had a board. I really got into it when I was 12 or so, when my dad took me to this place called Webb Park in San Diego.  I ended up getting a new board with really small wheels around that time, and from there it was on. I lived in Burbank but I’d go back and forth between there and San Diego. Burbank was always the best to skate; I still like to go. Eventually I ended up moving to Agoura Hills and met a bunch of friends who skated there, too. I was kinda the youngest out of all of them. All those guys killed it so hard. Then Spanky started skating with us, and Mikey Taylor too. It was a good crew, for sure. 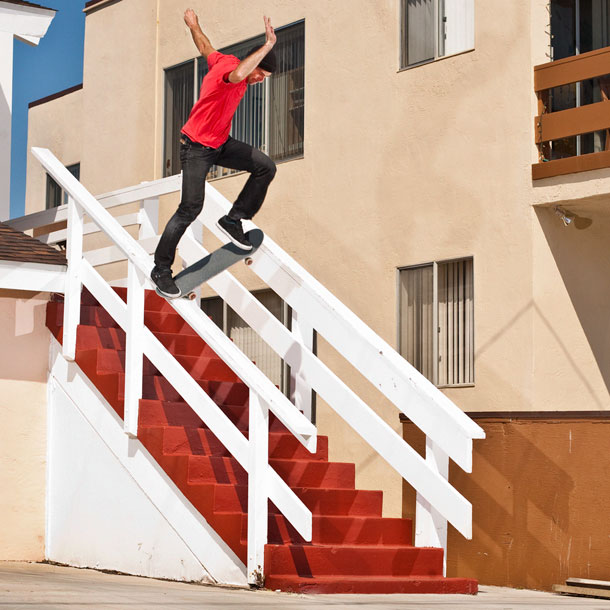 Weekday spots are hard to come by. Over-noseblunt. Click image to enlarge.

It can get pretty sketchy across that little border down there to the south of you.  Do you ever go get weird in Mexico?
I don’t really have any stories myself, but I’ve heard some crazy ones. It can get real sketchy down there. I probably shouldn’t be telling this, but one time my friend Edmond went to Tijuana to get a hooker, and he ended up with a girl who looked like my girlfriend. He told me about it right away, and I was like, “OK, that’s cool—just don’t tell her about it.” Five minutes later I walk out and he’s telling her, saying he’s sorry. She just laughed it off, like, “Oh, Edmond.” That’s when I knew she was a keeper. Now she’s my wife.

"I'm not about to let a curb stop me"

She is pretty cool. I mean, you two just got married not that long ago, had a baby girl, and you’re still out skating everyday. It must be nice that she’s so skate-friendly.
Yeah, it is. She’s amazing. It’s true. I’ve had friends who, just because of a girlfriend—not even married, don’t have any kids—never skate anymore. She really understands that this is what I do.

Being that your wife is related to Cliff Burton, are you a big Metallica fan?
I liked Metallica before I met her, which made finding out that they were related pretty awesome. I like them way more than she does, that’s for sure. She acts like it’s no big deal. 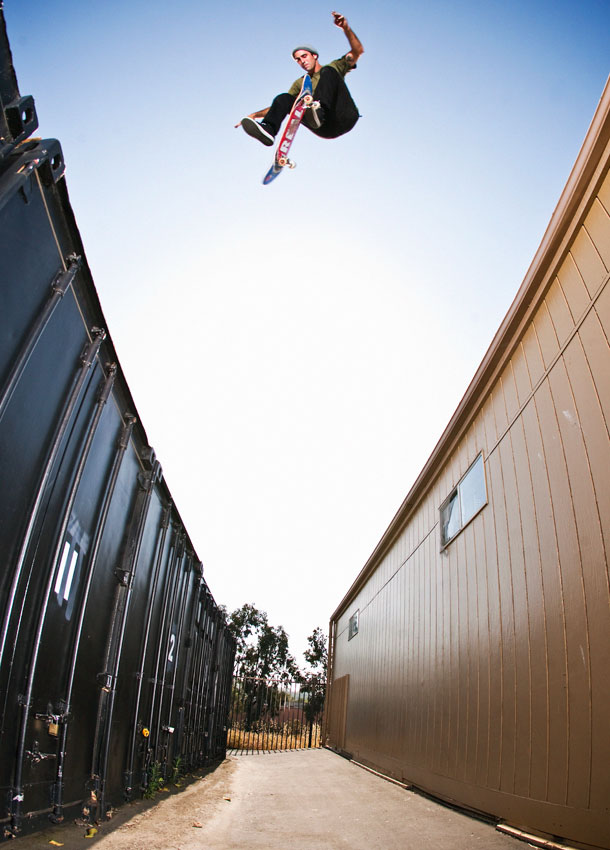 Always searching. 360-flip off the roof.

Who’s the best skater to come out  of San Diego?
There are so many favorites of mine. Peter Hewitt, Danny Way, Matt Hensley, Willy Santos, Adrian Lopez, all those mafia dudes—Smolik is sick. The Birdman. It’s hard to say.

Alfonso Rawls?
Oh yeah. Alf is the best too.

Agreed. This might be a weird one, but when did you become such a jock? You follow football pretty heavily; you know all the stats and shit. Is that your obsessive-compulsive disorder rearing  its ugly head?
My dad’s a big jock. When I was younger  I thought it was stupid. In my mind, anyone who didn’t skate just sucked, and that was that. But I’d still always find myself talking sports with my dad. A few years back it just sank in, and I really started following it. My dad’s kinda OCD, and so is my sister, so maybe it’s hereditary. 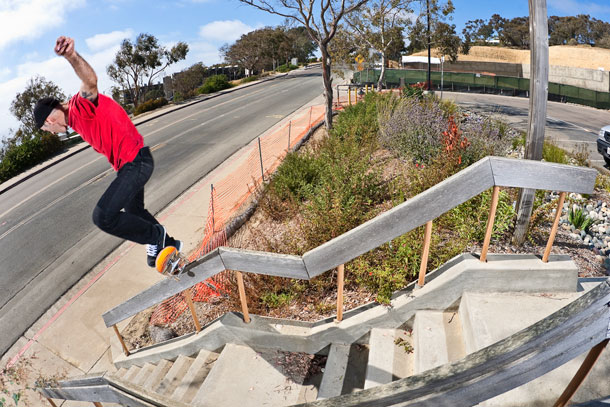 Break in the traffic on a busy street, gap to crooks. Click image to enlarge.

You do have a lot of obsessive-compulsive ticks, especially when you’re about to jump down some big shit. Trying not to die. Can you walk us through what’s going on inside your head? What internal dialog is taking place up there?
I feel like I’ve gotten better about it over the years, but it really gets bad when there’s a short run-up or something weird about the spot. Maybe it’s that, sometimes, I’m just really nervous—and I need something to grab on to that’ll get me psyched. Like touching my board the same way every time, or making some stupid bet. I just need some kind of a routine. It’s not cool. It really sucks, and I think I owe every one I film and shoot photos with thousands of dollars—but sometimes it’s what I need to do to get myself to jump on things.

"Hang out with the fam, go to the movies, look for spots"

Some of the other Real guys do the betting game, too. Is that something you picked up on Real trips? Explain this betting phenomenon.
Basically it’s me trying to get myself psyched to do something, by telling Morf or Aaron or everyone who’s there that I’ll pay them $100 if I don’t try to put it down. It kinda forces me to do it, because I don’t want to pay out $700 for something that I’m just going to try and not really attempt to land. And yeah, it might be my fault that it’s happening so much on Real trips now. I do know that I made Ernie start doing it.

When you’re not out skating,  what do you do?
Hang out with the fam, go to movies,  look for spots. 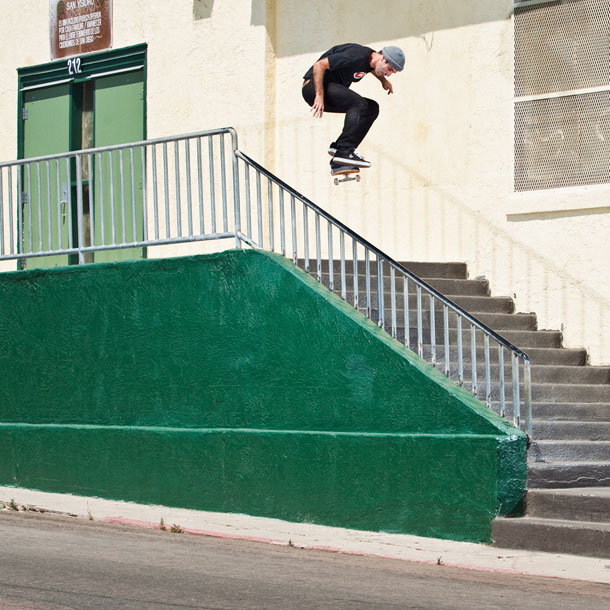 Digging deep into the old Osiris videos for terrain—kickflip over the rail, a stone’s throw from Mexico. Click image to enlarge.

Or until you find something jacked. It seems like you can’t just skate a regular spot. When we’re out searching, you like the ones that are messed up. “Let’s get the plywood and the curb ramp.” I think you need something that’ll fuck with you.
I know what you mean. I like normal spots too, but if I see something that looks rad, I’m not about to let a curb stop me.

Max has been riding for Real for 20 years now, and Huf is just around the corner from that. Do you see yourself being a lifer here, like those guys are?
I wish. I really don’t think I’m on their level and never will be. 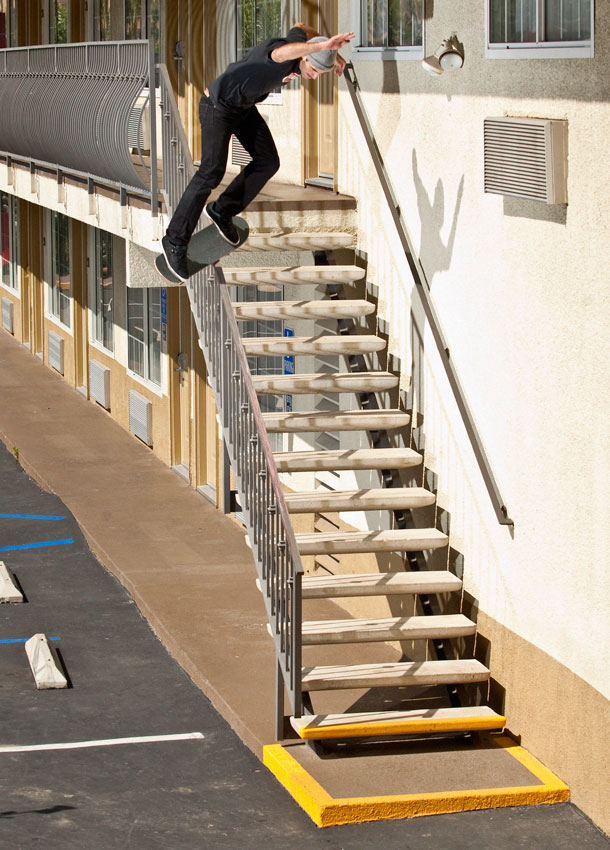 Feeble down a steep rail, with a bonus step to clear.

Well, how’s the video coming along?
It’s crazy. I’ve watched a lot of the footage and it’s been getting me so psyched. Dennis and Pete are insane. Then you’ve got Ernie, Massimo, Jake, and Chima killing it, and Hardy is so jacked. And that’s just half the team! It makes me nervous. I just hope my part doesn’t suck.

"It's so fun to scare yourself"

What happened with Vox?
It’s a long story. To me, it got weird when my friend Ed—the person who started the company, who got the name and the team and all that together—quit. I don’t really know who’s wrong and who’s right, but I started feeling weird about Vox at that time. Then, after that, my friend Mark started doing everything there, and because of that I felt good for a bit longer. But then he quit, and so did my other friend, Nate, and shortly after the whole team started to split. I kinda felt like my friends weren’t there anymore, so I didn’t want to ride for them anymore. That shit just happens sometimes. It’s hard—you try to make something work, but it takes a lot of energy and money. There are people who’ve invested and they want to see a return. It’s also hard to explain the way skateboarding works to people who don’t skate. Not to say that those people suck or anything. Just recently I got to talk to some of the new guys they have over there, and it sounds like they’ve got it going pretty sick now. It sounds like some actual skaters are back in, and that things are getting better. I still have a lot of friends over there. It’s a sick company, and  I hope everything works out.


Pointer grind across and down.

Are you gonna get back on?
No, don’t think so.

You got pretty broke off trying to  three-flip noseslide down Clipper.
Yeah. That sucked.

What did you break?
I broke my leg in a few spots, I broke my nose, and I knocked my teeth out of place. Need to go back for that one. 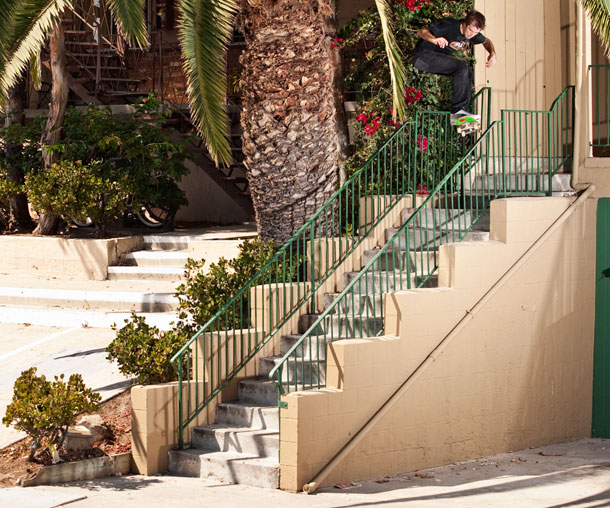 Everyone’s been there, few have skated it. Burly gap to front board. Click image to enlarge.

I’m glad I wasn’t there. I remember when Aaron was logging the footage, he just skipped right over all of it. Like, “Yeah—don’t ever want to watch that again.”
He said he doesn’t even like going to that  spot anymore.

How has it been coming back from such a gnarly injury? What’s it take to get the confidence up to throw yourself back down some shit?
It was hard in the beginning. It’s weird—at first when you’re hurt, you still have that confidence, like, “I can’t wait until I’m better. I’m gonna do this, and that, and find all these spots.” Then when you’re finally able to start skating again, you want to go for it. I jumped down some shit too soon and set myself back a bit. I remember the first thing I filmed was a backside nosegrind on this hubba for a Vox ad. It set me back, like, two months. You know you should keep it cool, but it’s so fun to scare yourself.

JT reviews his favorite covers that were shot in San Diego.