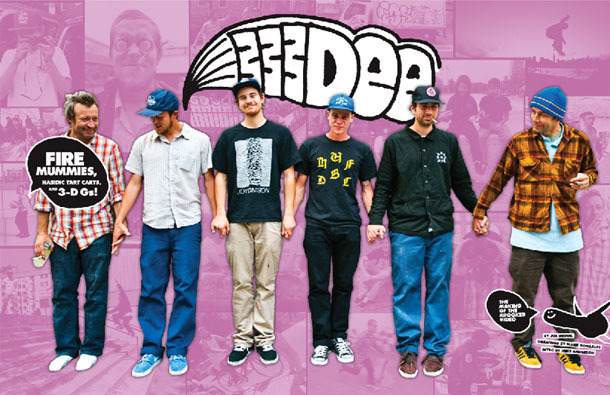 Life is full of questions:  Why am I here? Is this real? What if I don’t finish all my chores? Should I slow down on the drinking? Are we not men? Is my schlong gonna shrink?

And what about skateboarders? Are we more fucked than your average Joe? Are curbs getting higher? Are stairs getting bigger? How are we gonna film for a video in only three months? Is it really in 3-D? Is 3-D even cool? Fuck, man! This is stressing me out!

For as many questions we have, there are always answers. So what is up with this Krooked video? We had some good times making it. Joe Brook and I’ll try to break it down. 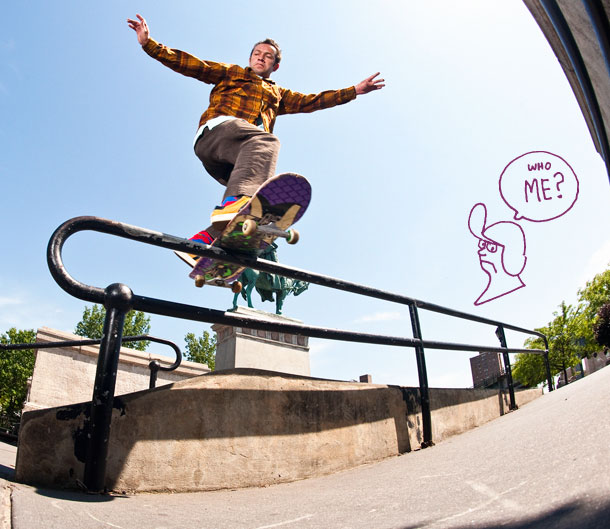 The Gonz Father showing everyone how it's done. Style for miles! Photo: Brook. Click image to enlarge.

"Cromer wrapped himself in toilet paper and set himself on fire"

Did I mention Mark Gonzales? Words could never describe Mark. A true individual. I’ve never experienced a dull moment with him, whether he’s out pushing you through the streets or riding in a Hasidic school bus. Then there’s Dan, the man full of answers. He’s seen every documentary known to man. Van Wastell—the definition of a legend. Miss you, brother. Hey Bobby! Look out! There’s a cop! William H Brad Cromer is actually from Jupiter. Luke Croker is a car-destroying Australian. David Clark carries a beer coozie with him at all times. The rest are all amazing people too, and this video wouldn’t be anything without them. —Mike Anderson 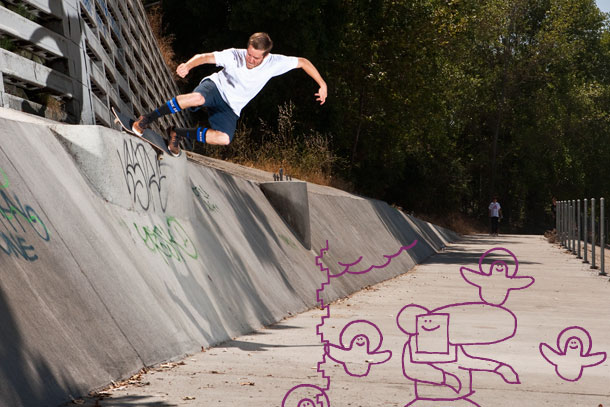 PACKED LIKE SARDINES
After arriving in NYC on a delayed flight, we found out that the entire Krooked team had been booked into one Manhattan hotel room… All 10 of us. Me and Mic-E decided to stay at my friend’s apartment down the street from Gonz’s house, leaving eight dudes at the hotel. In. one. room. When the cats are away, the mice will play! The guys barely slept; NYC’s a hard place to be productive. There’s so many distractions, hot girls, and nightlife, all signs of things about to go awry. 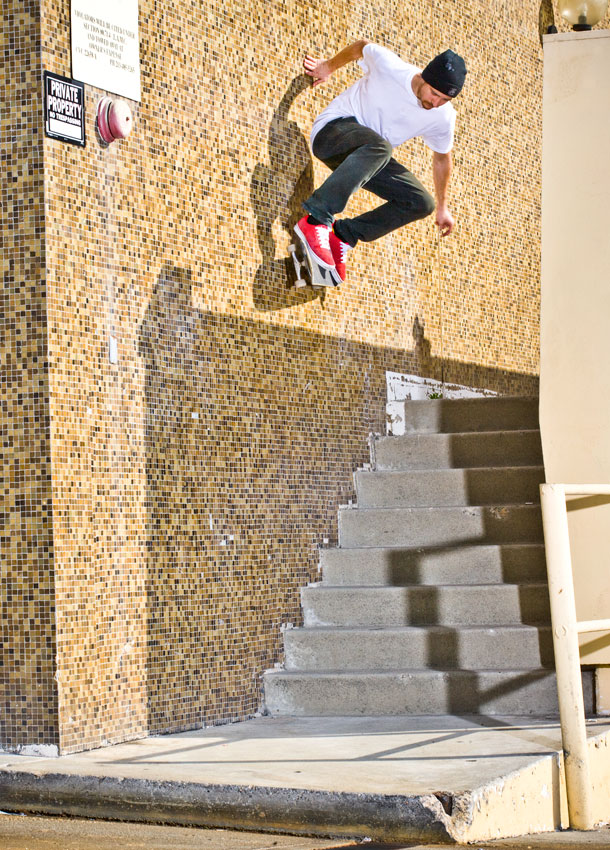 The hotel was slowly destroyed by the team smoking in the bathroom and smashing bananas on the mirrors. Cromer wrapped himself in toilet paper and set himself on fire. A fire mummy! Clark showered fully clothed, with the hotel phone in there with him.  Cancer Dan was the Kingpin behind it all.  He was using the room as a huge porta-potty. The Dude stew had come to a boil.


Cromer coined the name Fire Mummy and lived through it. Coast-to-coast tailslide kickflip out...and a drop to boot. Sequence: Brook

"I wish it'd been a tart cart"

HASIDIC SHORT BUS
This overzealous Hasidic Jew bus driver was getting hyped on the skating while we were at a spot in Brooklyn. Someone asked him for a ride, and next thing you know, half the team had jumped on this twinkie school bus while the snappy-curled driver railed us around the block at high speed. He was super excited, to say the least. I wish it’d been a tart cart—that would have been more our style! I can’t image what the bus driver told his friends. 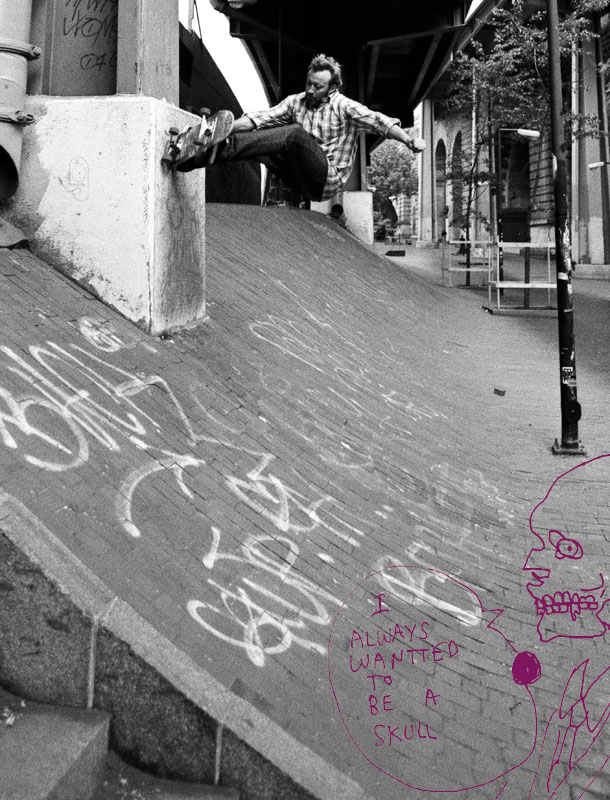 Cancer Dan, getting his licks in at this urine-drenched spot that he might have soiled himself at one time or another in his life. Photo: Brook

"Ended up with a pretty good dead leg"

ACQUA ITALIA
Mark loves San Pelligrino water—a lot. He made me take him to an Italian market to get a few cases, and while Mark was paying for it, they sent me around back to pick up the bulk order from the warehouse. When I grabbed the hand cart and started stacking the boxes, this old Italian man who was standing there with a walker started talking shit and laughing at me in his native tongue, having a ball at my expense. It was weird, him laughing and yelling at me in Italian—what was so funny? Was he friends with Mark?


Manderson, your boss Thiebaud did this trick 25 years ago on the Sears curb in SF. What you gotta say about that? Sequence: Broach

Afterwards, we carried the boxes of water up to Mark’s place. When he opened the door, his son William Dexter greeted him: “Daddy’s home! Daddy’s home!” That was pretty cool. The Gonz Father! 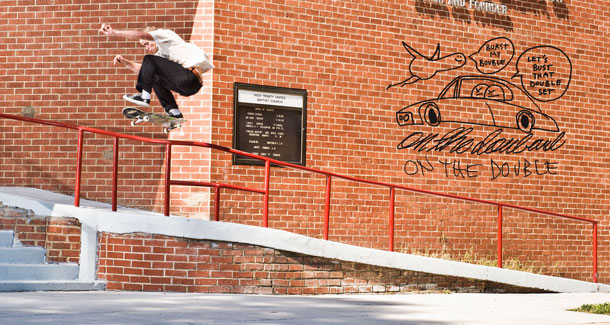 This washboard road run-up was no deterrent for Cromers. Kickflip in the DC 'hood. Photo: Brook. Click image to enlarge.

"There's so many distractions, hot girls, and nightlife, all signs of things about to go awry"


Worrest doing the distance on this switch tail switch flip out, following in the footsteps of his DC skate brethren. Sequence: Broach

THERAPY SESSION
The whole team was stoked to see Mic-E shredding, but he ate it hard at the Brooklyn banks. Ended up with a pretty good dead leg. Due to his lack of mobility, I volunteered to grab the camera that he’d forgotten at my friend’s apartment, which was on the fifth story of a building with no elevator. As I’m opening the door, this guy walks over and quietly asks me if I know where he could get a good massage…one with a happy ending. I was taken off guard–but I looked over at Mic-E, laid up in the car behind the wheel…  “I don’t, but that guy in the driver seat over there will know for sure!” 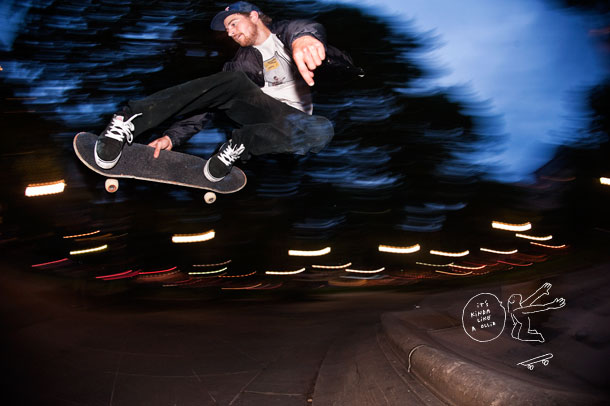 FEATURED ARTIST
Mark secretly had some Mike Anderson pro boards printed up before we came out to NYC, and unbeknownst to Manderson or the rest of team, we snuck out early one morning to hang one of the decks in a gallery that we knew we’d be skating near later. Only me, Mark, and Mic-E were in on it. When we were out on the streets that day, Mark suggested, “Hey! Let’s check out this gallery for a minute!”

The curator was there to greet us, and he’d been clued in on who Mike was ahead of time. He started giving him a tour of the art on the walls: “On this wall is a unique piece. On this wall, we have a very nice painting. And on this wall…the Mike Anderson pro model!” The whole team went nuts, and it was so cool to see how stoked Mark was to have made it all happen. A pretty epic way to go pro.
© 1981–2022 High Speed Productions, Inc.