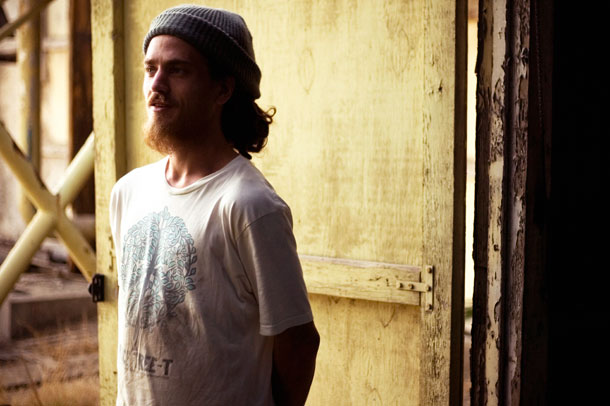 "I don't know if I should be discussing this stuff.  It's top secret."

Where are you from, who do you ride for, and so forth?
I’m from Melbourne, Australia, and I ride for Almost skateboards, Nike SB, Volcom clothing, Thunder trucks, Spitfire wheels, Modus bearings, and Muse Audio.

Did you begin skateboarding in Australia or Sweden?
I started skating in Australia for about a year or so before I moved to Sweden. When I moved there, skateboarding was definitely still new for me. It was pretty tight; I met a bunch of new people and saw all the cool skateparks. It just sparked it for me. Growing up in Sweden, I started traveling and taking trips into other surrounding countries. You could hop on a train or get a flight real quick. We used to get a flight down to Malmo in the bottom of Sweden and take a ferry across to Denmark. Then we’d go skate in Copenhagen or go hang out in Christiania.

I’ve heard cool stuff about Christiania. You have any Penny stories from there?
One of the first times I really left town with the homies was on a trip to a contest in Malmo. After the contest, instead of heading home, my homies were talking about this mini-ramp being built in Christiania. We decided to check it out. When we showed up, Penny was there chilling and helping build this ramp—the one in the ad where he’s blasting the frontside flip in black and white.

With the bowl in the background?
That’s the one. This was when Penny went so-called “missing,” and all of a sudden he was there. As soon as they got the first bits of plywood down he was shredding. It was cool, man. It was good to see that; I was always a huge fan of Penny.

You were saying that Menace was the first board company to hook you up.
Kareem came out to do a demo when I first moved to Sweden. He saw me skating at the park and told me he wanted to hook me up with some stuff and put me in connection with the distributors in Sweden that carried his product. I skated for the distributor for a bit. Kareem ended up coming back again and doing some more demos, and because I was riding  for the distributors I got to skate the demos.  I remember it was an Axion trip with Gino,  Guy Mariano, and Kareem. I did demos with them, and afterwards he told me he wanted to get me product straight from the States. That’s when I started getting Axion shoes and Menace boards, but I got stuff from those guys for years. I went through all the name changes from Menace to All City to City Stars.

Since you moved around growing up, were your parents supportive of your skating?
They were supportive of the skating, but with the skateboarding came other stuff like ditching school, because I just wanted to skate. I would be sitting in class looking out the window at a set of stairs and that’s all I could think about. Then I moved to Sweden and started ditching school more to
go skate. It got to a point where my dad called my sponsors and told them to stop sending me stuff because it was getting in the way of school.

Did you graduate  high school?
No, I didn’t. By 11 or  12 I was already ditching school to go skate.  By the time I was a teenager I was just over it. At this point my mom was living in Australia. One year I came out, I think it was my birthday, and we were having this barbeque at her  house. At the time I wanted to move back to Australia and really concentrate on skateboarding. Dustin Dollin was talking to my mom at the party, and my mom told Dustin that skateboarding was getting in the way of my schooling. I just remember Dustin slamming his fist on the table and saying, “Hell no, schooling is getting in the way of Lewis’ skateboarding!” He talked to her a bunch that night and kind of convinced her that I could do something with skateboarding, and she let me move back to Australia.

When did you start growing the dreads?
Around 2004 and I haven’t really looked back since.

Are there any downsides to having them?
Just the usual, “Where’s the weed at?” Sometimes my friends get dragged into it, too. The other day when we all walked into the burrito spot, you were wearing the tie-dye shirt and I had the dreads, and some guy walks up to Nick Garcia, laughs, and says, “Munchies, huh?” We were just coming home from skateboarding and hadn’t even been smoking.

Who’s the toughest dread on a board?
I saw a tight Karl Watson clip on the Internet the other day. Always been backing that dude. Who do you think is the toughest?

Neen Williams is my vote.
Oh yeah, Neen! He’s tight. I’ve been skating with him a bit on this trip. He’s one of the toughest dreads on a board. Keeps a good vibe when he skates too. Wooo-wooo!

What’s the most effort you’ve ever seen Jason Hernandez put into making a spot skateable?
Dude, that guy has everything on lock down. He’s the best dude ever to skate with. He makes anything work.

His truck seems more like an assault vehicle than a car.
He’s prepared for everything. I don’t know if I should be discussing this stuff. It’s top secret.

I saw you doing some pretty jacked flatground tricks the other day. What are some random flip tricks you could pull out in a game of SKATE against someone like Cory Kennedy?
Hopefully I’d win the roshambo, otherwise my throat would be cut. But I was getting those 360 flips with the 360 body varial the other way. I don’t know what those are called, but I would probably just go straight for the most ridiculous tricks I could think of.

You skate a lot of ledges, but you also jump down some pretty hefty gaps. Is there one you prefer more than the other?
I don’t know. I love skating ledges, but sometimes it tests the patience. Whereas when you skate a gap, you’ve just got to get yourself to land on your board. I used to be picky with what I skated, and it would wind up with me not skating. Now I try to skate everything, even if it’s something I can’t skate that well.

The cops rolled us the other day,  and I saw you give him an Australian learner’s permit. You have a car but no license yet?
Funny story. Last time I was here in the States I got sick of having to rely on everyone else, because you really need a car in Southern California. So when I got back to Australia  I got my permit. Now I have to drive with someone with a license. Nobody would let me drive with them, though, because I wouldn’t be covered under their insurance—so after getting denied by too many homies I just went out and bought a car. I’m going to get my license when I get home, though. 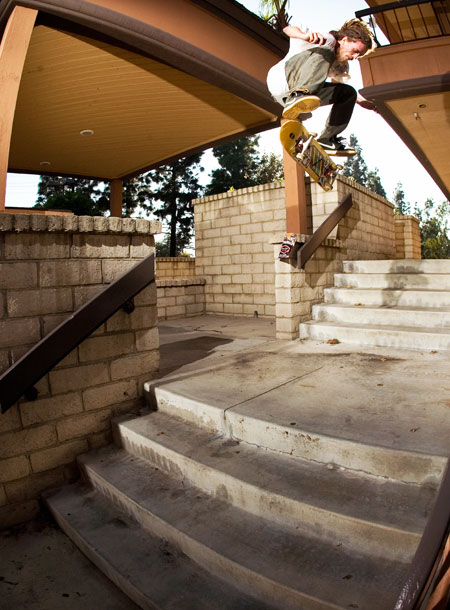 When we were shooting the portrait for this interview, you hid our camera bags. It seems like you’re always jumping out of doorways scaring people. What’s  the best prank you’ve ever pulled?
I think I was a better prankster in my younger days. When I was 13 or so my friend and I managed to get a hold of some acid. My friend’s parents owned an antique shop, and their apartment was in the back of it. Eventually we decided we’d get dressed up in all the antique clothes, in all the furry jackets and crazy hats, and pretend to be mannequins. People would look in the front window and we’d make sudden movements to scare them. That was my younger years, though. I don’t really mess with the stuff anymore.

Are you the first pro skater diabetic?
I’m sure there are some other diabetics out there, but I don’t really know of any who are professional skateboarders.

We were looking at a list earlier of famous diabetics, and there are some pretty big names on there. Looks like you’ve got a solid squad going.
There are a lot of famous diabetics out there. We’ve got Ghost Face Killa, Johnny Cash,  Syd Barrett, Elvis Presley, I think Halle Berry, James Brown. I’m in good company.

What’s your favorite candy to munch on for the quick fix of the blood sugar?
Gummy sour watermelon candy, for sure.

I keep seeing legitimate veteran pros getting cut from their sponsors. Do you have any plans for after skateboarding?
I do have this idea. If you’ve ever been to Denmark, they have these bikes—it’s a normal bike in the back, and then it has two wheels on the side and this big box up front. I wanted to paint one up all nice and have an umbrella up top, speakers, generator, and an espresso machine. Ride around busy areas all day and sell coffee. People pay—what—four to five dollars a cup? I can sell it for three.

You got a name for this bike yet?
No, not yet.

What about Jah-va?
I’ll get back to you on that one.

Hear any good jokes lately?
My homie Sean just told me a good one. A bra and a set of jumper cables walk into a bar and try to order two beers. The bartender denies them. The bra then asks the bartender why they were denied, and he says, “Because you’re off your tits and it looks like your friend is about to start some shit."
© 1981–2021 High Speed Productions, Inc.