No Play in Taipei

Madars Apse and some of the Element team explore the island of Taiwan. As seen in the September mag.
By Madars Apse | Photos by Davy Van Laere 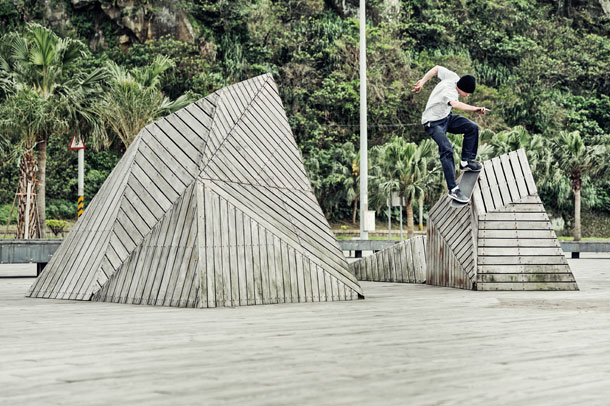 Not exactly a perfect ledge but fun nonetheless. Karsten Kleppan gaps to Smith on a wooden iceberg

By now you’ve undoubtedly heard tales of the numerous, uncharted virgin ledges in China. Supposedly they’re everywhere— as far as they eye can see. Those mythical, marble structures are what initially spawned this mission to Taiwan. Although once there, we found there was all sorts of architectural amusements to entertain ourselves with, not just the 90-degree variety. Minds were opened and spots were desecrated as we made our way through the east-Asian state. And by “we,” I mean: Patrik Wallner (videographer), Kenji (Japanese friend and tour guide), Tommy Zhao (second-angle filmer), DVL (photographer) and six guys that skate for Element. You can just reference the photos to get those names. 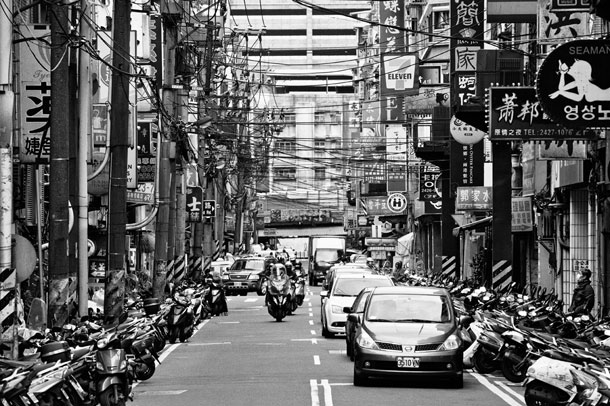 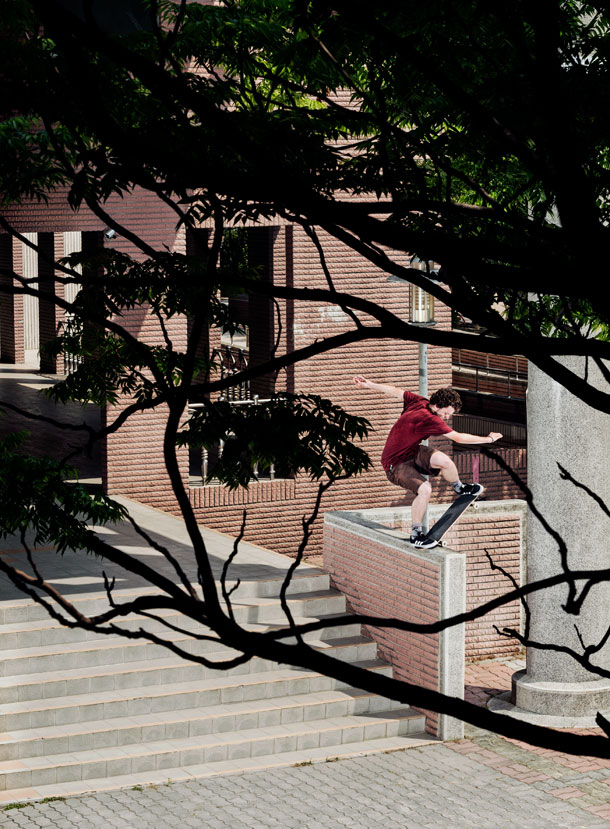 "MINDS WERE OPENED AND SPOTS WERE DESECRATED" 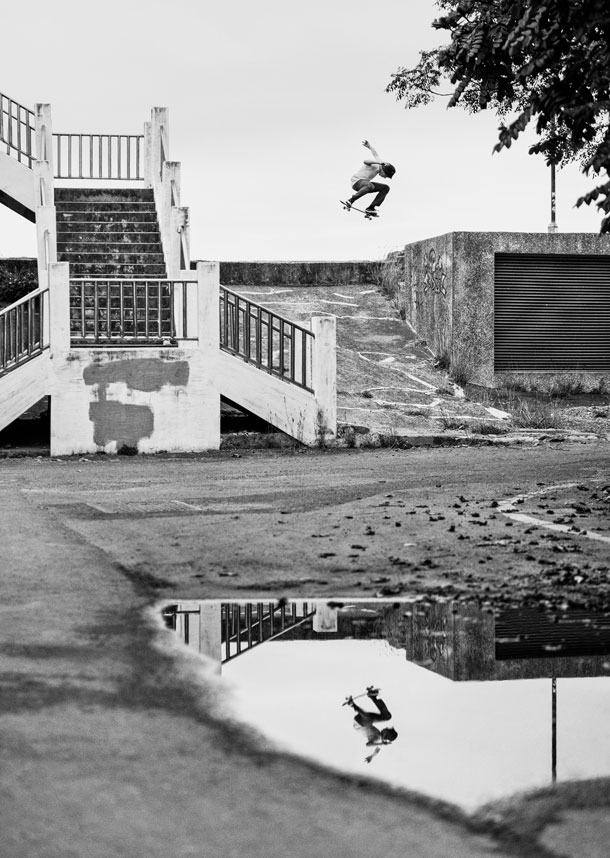 Nick Garcia passed on the mythical marble and went for the crusted ‘crete instead. Backside 270 into a battered bank 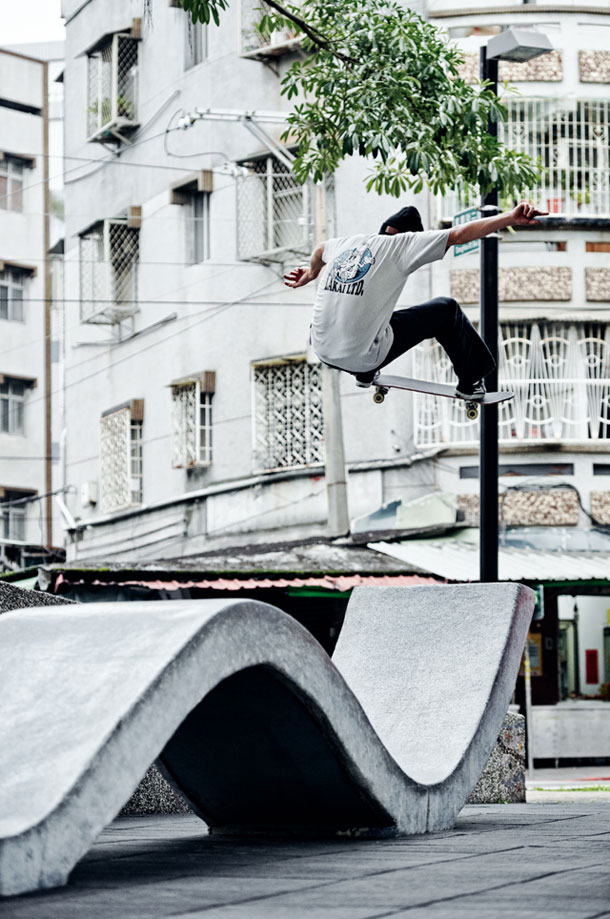 Taiwan is similar to, but definitely not, mainland China. The official name of the country is the Republic of China, which is different from that of the People’s Republic of China, the old empire we all know. If the Taiwanese island would ever try to become independent and rename themselves the Taiwan Republic, China would take it over like Russia took over Crimea. Although China influences the island significantly, it is certainly a whole different culture. Taiwan is much cleaner than China; it seems like a more advanced country with better food to eat and faster trains to ride. To our Western minds, it’s hard to comprehend the lifestyle of an average Asian person: they work the longest hours in the world and sleep the least. As weird as it seems, this hectic schedule makes it perfectly normal for a married couple to cheat on each other with their coworkers. Get in when you fit in, I suppose. An often-recurring phrase in Taiwan is, “No time to play.” For the Taiwanese, anything outside of work is considered play: going to a bar, watching a movie, hitting a tennis ball around. Life consists of work, eat, sleep and play. Every security guard we encountered shouted the same phrase at us: “No play! No play!” As travelling skateboarders, our entire existence was strictly play: no arranged schedule, no obligations and no real responsibilities (besides landing tricks). It was just 100-percent play all day—every day. 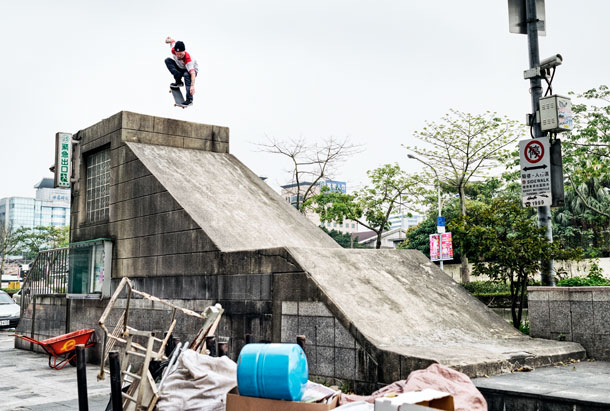 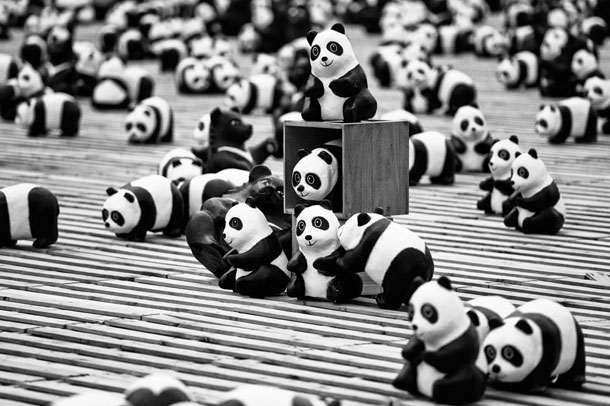 "GET IN WHEN YOU FIT IN, I SUPPOSE" 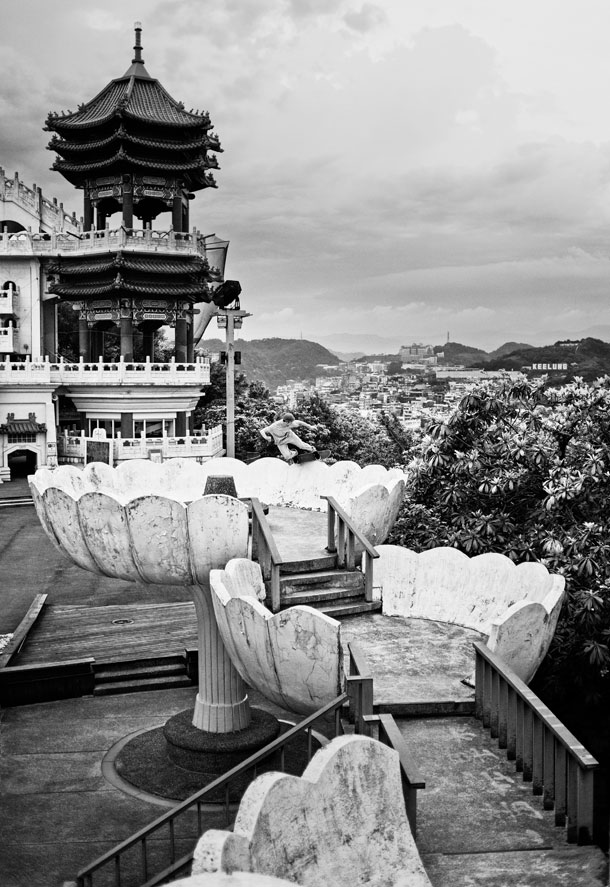 Michael Mackrodt deflowered this virgin spot with a feeble grind 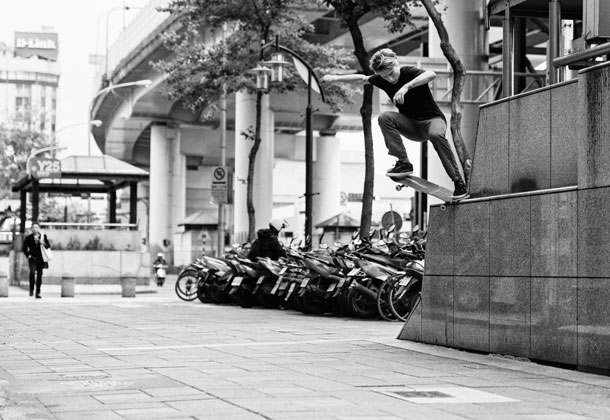 This trip was epic, as there were Element Europe guys along with Nick Garcia and Trent McClung from the US. It was great to see how everyone can push the limits and bring a good vibe to the adventure. Nick was doing the biggest drops into some of the tallest banks ever skated. One day Trent was just playing with a backside 360 one foot and ended up getting around a million views on the Net with a simple flatground trick. Everyone was ripping—Michael Mackrodt was fishing for some lines, Karsten Kleppan was getting gnarly as usual and Phil Zwijsen destroyed every spot in sight. I was hurt, so my only contribution was introducing the guys to some unorthodox methods of treating a swollen joint. And, no, not that kind of joint. 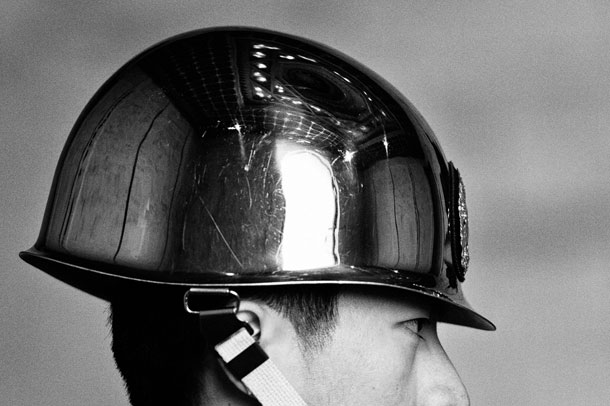 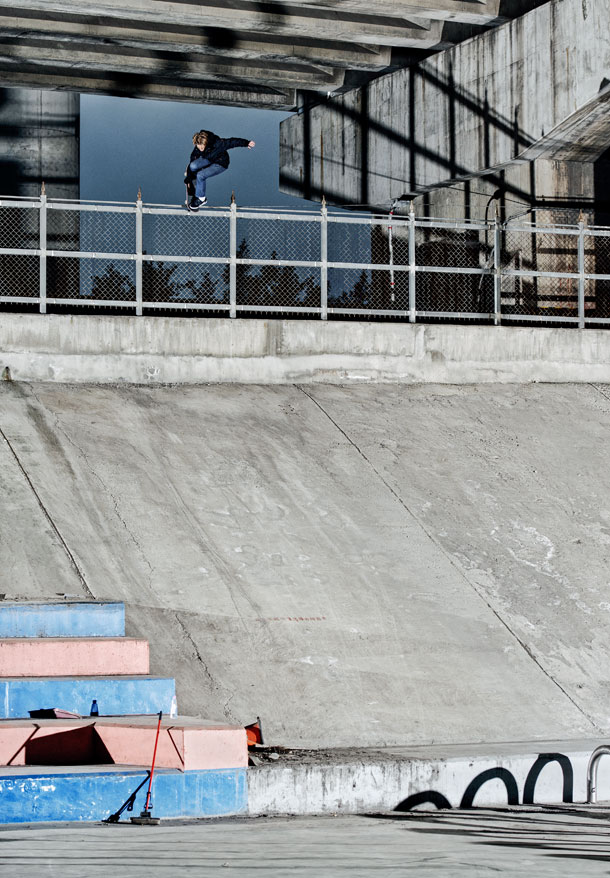 Apparently dump trucks are huge in Taiwan. Nick Garcia, comin’ down the mountain 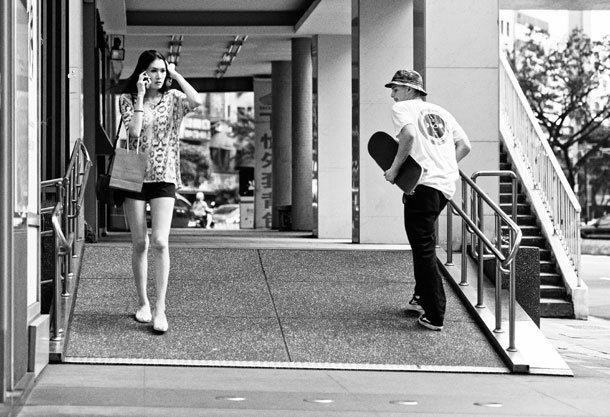 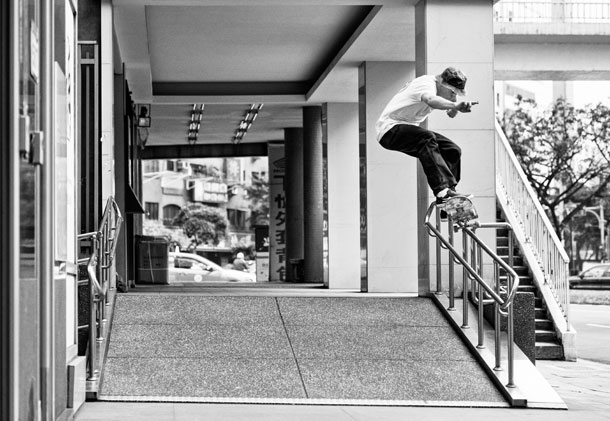 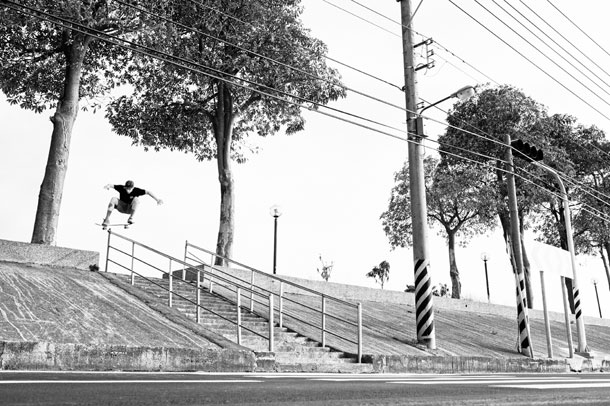 After a few days of skating in Taipei, we took a bullet train to T’ainan, a small harbor town with not only crazy spots by the port but also some crazy seafood. There we ate live still-moving sea urchin and had prawns with pork in them. Our photographer Davy does not eat pork or beef, and eating in Taiwan proved to be a bit problematic for him. I was on the other side of the fence. Stuff as many animals together as you can and I’m good. Shrimp in my pork or pork in my shrimp—but not one without the other. On the trip back to Taipei we had to switch trains in a city called Taichung. Michael, being the good guy that he is, offered to help Davy load his camera gear onto the train. As we were departing, we poked our heads out the window and saw one of Davy’s camera bags sitting unattended on the platform. We watched in horror as the train sped away from the bag which easily had 10,000 dollars worth of gear in it. Davy’s known to get crazy from time to time and we fully expected him to unleash his fury upon Michael. But to our surprise he kept his cool and just asked the train manager to call the station and have the bag held for us. One thing we learned to appreciate from the Taiwanese culture is their honesty and trust. If this were Brazil, the bag would have probably already been gone by the time we looked out the window. But in Taiwan it was all good. 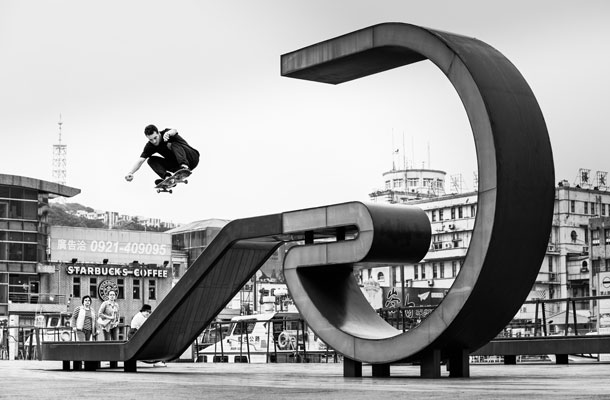 No matter where you ollie these days, a Starbucks is within sight. Michael Mackrodt brews up a beast 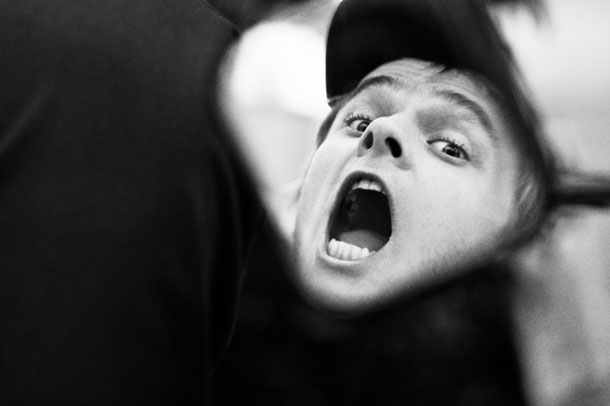 Madars in a scooter mirror

"STUFF AS MANY ANIMALS TOGETHER AS YOU CAN AND I'M GOOD" 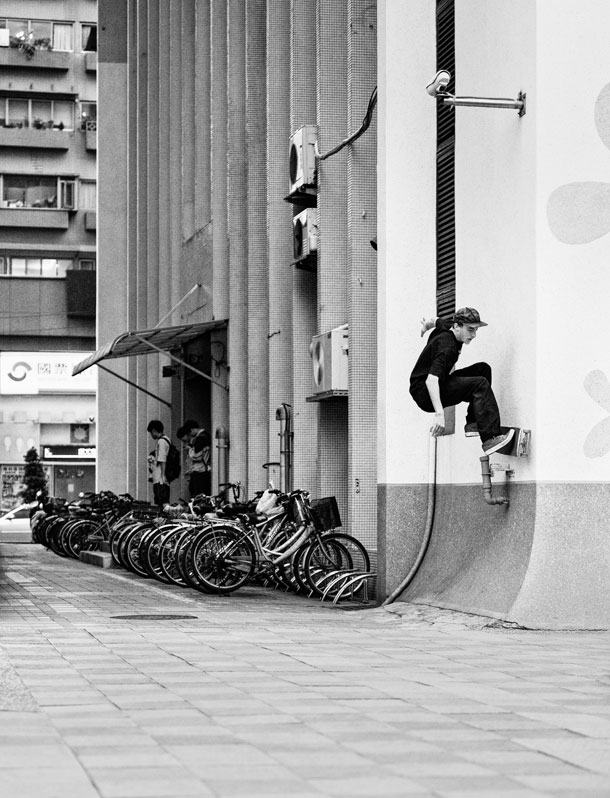 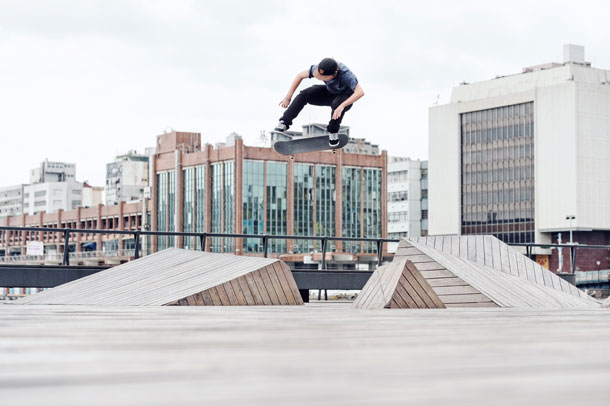 True to the myth, Taipei had some of the most perfect marble ledges we had ever skated and tons of banks that should be part of the design for the next generation of skate parks. And it’s all there for the taking. There’s nothing to stop you and your friends from going there, too. You’re just a plane flight away
from play.