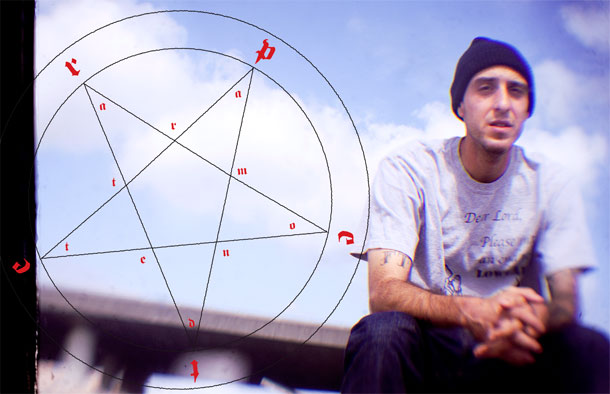 Pete’s a man of few words. He only speaks when it’s absolutely necessary to say something relevant to what’s going on at the moment—which is going to make interviewing him pretty hard, now that I think about it.  You can tell when he gets stoked: He’ll look a little confused, but smile at the same time. I’ve rarely seen him angry in the eight or so years I’ve know him. He’s a very level-headed and humble person, which makes some of the things he does on his board seem a little ironic. You’d think he’d have to be a nut job to skate some of the spots he does. When most people look at a jacked runway, or the landing is super bad, they tend to be over it—but not Pete. He doesn’t even notice the bad stuff unless you point it out to him. Not just in skating, but in life,  as well. I’m not going to go on about how great Pete is on a board. I’ll just quote  The Big Lebowski—The Dude himself—and say, “That creep can roll, man.”

Do you know that you can  Wikipedia yourself?
I know about Wikipedia, but I never  tried that.

I’ve known you for a while now, but  I always have to Google your last name so I know how to spell it—I’m a genius,  I know. But this is what it says:

Peter Ramondetta (born 1982 in Wichita, Kansas, United States) is a professional skateboarder. He currently lives in San Francisco, California. While living in Tulsa in the late 1990s, he developed a reputation among the local skate scene as being one of the most talented skateboarders in the city. He eventually became known as the “local hero,” a title earned after skateboarding at Tulsa’s famed downtown Bartlet Square with Kerry Getz, Elissa Steamer, Brian Anderson, and Ed Templeton, following a skateboard demo held by the Toy Machine team. Magazine photographers and writers that were currently writing a story documenting the Toy Machine tour were so impressed to see a local skateboarder skating on par with the professionals that they mentioned Ramondetta  in the article, calling him the local hero.  Shortly after, Ramondetta became sponsored  by Real skateboards. 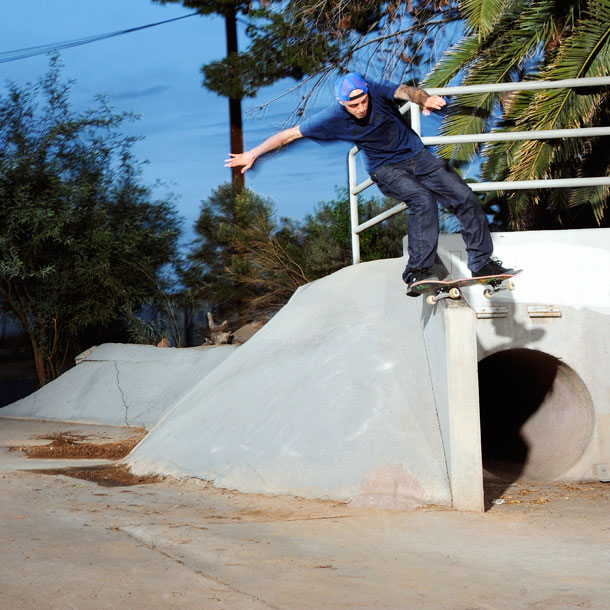 Bank on the hurricane. Photo: Morf

"If my brother knew what I was doing, he might want to kick my ass."

Is this all true? Should we even  finish this interview? Is that all  we need to know?
I don’t know about that… No. Weird.

How does it feel to have your board in the Guthrie Hall of Fame museum?
Guthrie, OK doesn’t have too many people who actually make it out of there. I think they were psyched to have someone who kind of accomplished something. But yeah, I’m flattered. It’s good.

Why did you get rid of the  platinum tooth?
It kept falling out because it didn’t fit right. It was better and easier to get a real one—or a fake real one—put in.

Tell me about your new schedule.  Early morning yoga missions.
I’ve been trying to wake up early and start the day right. Get loose. I go to the 6:00am class. It’s either that or the next one at 12, but that’s too late in the day. If there was an 8:00am or 9:00am that would be perfect, but they don’t have ’em, so I get up.
The yoga helps with the skating?
It helps me stretch and get loose. I’m really bad about stretching before or after I skate, so if I start the day off like that, I tend to feel better. I’ve been trying to keep it up.

You don’t drink or smoke anymore. Would you still do whip-its while driving?
Not anymore, no. 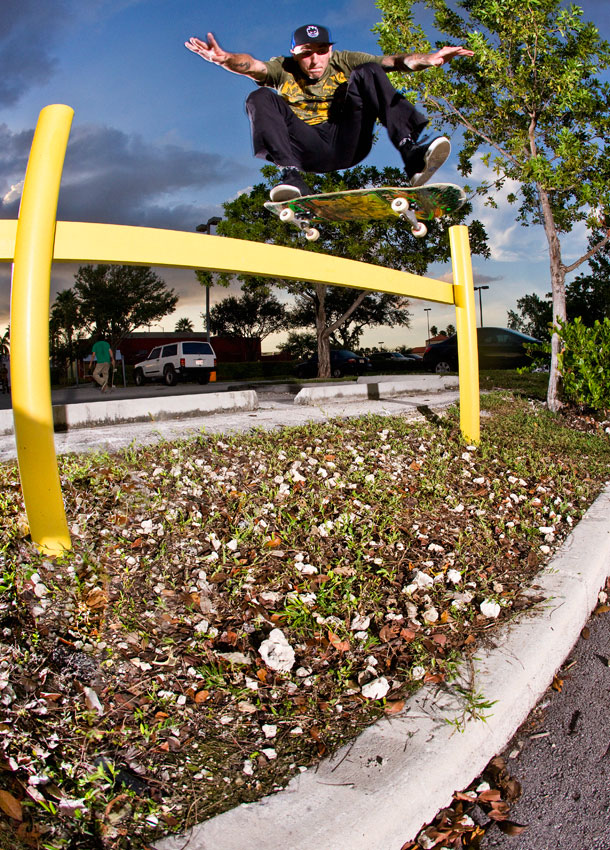 If you had a car, what kind of car would you get?
I haven’t really thought about it. I just do this SF City Car Share if I need a car. They have a Prius by the house that I end up driving when I need it. I rent that to drive around. It’s 30 bucks a month; you book it online for the time you need it, and it’s only a few blocks from my house. This way I don’t have to worry about parking tickets, all that sort of stuff. I live near the UN Plaza, and it’s all meters around there. Owning a car is more trouble than it’s worth in this part of the city.

So you’re not drinking as much. You drive a Prius occasionally, living in SF and doing yoga. Does the Okie metal  side of you want to kick your own  ass sometimes?
When you stop and point it all out, it sounds pretty…well, lame, but it’s working out for me. If my brother knew what I was doing, he might want to kick my ass.

When you go to get a new tattoo, does your new SF yoga side fight the metal side about it? Or do you just get softer tattoos, like dolphins swimming instead of zombies?
I was thinking about a dolphin on the ankle. I don’t follow the mental part of the yoga stuff; I just do the physical part.


Nose manny nollie flip out and over. Sequence: Morf

You live right on Market Street in downtown SF. What’s the weirdest thing you’ve seen from your window?
I see the Gay Pride parade every year. That gets pretty weird. You see lots of naked people who are psyched on partying. I tend to always wake up when it’s the Dykes on Bikes riding by—it’s a bunch of naked dykes in leather chaps turning around the corner.

Are you a gambler?
If I’m at a online casino, or if someone’s rolling dice. I wouldn’t call myself a gambler.

What’s your favorite type of terrain  to skate?
I go through phases. Something that’s challenging, that you have to figure out how to skate. A little bit ago I was psyched on transition, then I got psyched on ledges again. 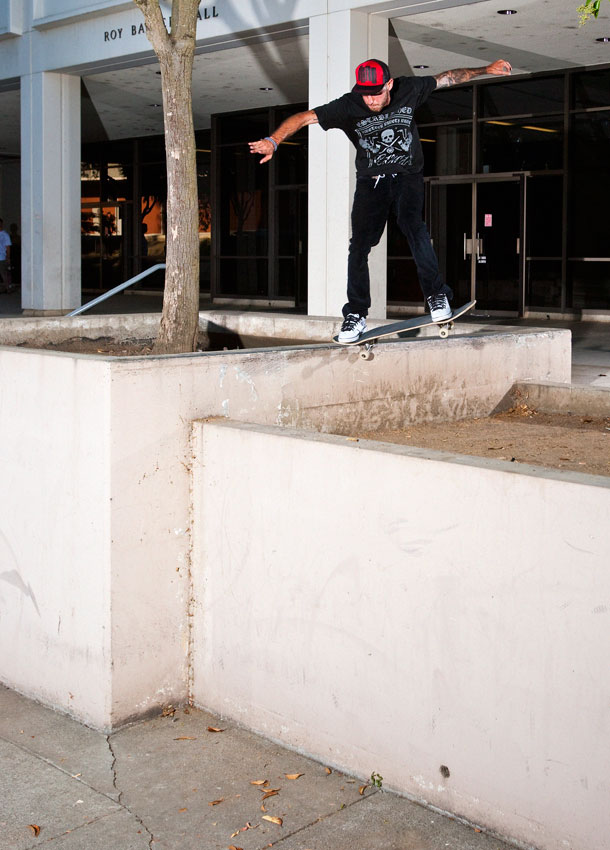 “Am I going to have a seizure?”

You told me one time that you’re  getting pickier about the spots you skate. Is that still true?
I wouldn’t say pickier. I know myself a little better; what I can do, and what kinds of spots I can do it at. When I came out here, I felt  like I had to skate everything, not because  I wanted to or necessarily thought I could do something. Now I’m better at picking and choosing my battles. I used to try stuff that  I didn’t even really think I could do, but I’d try it anyway because I thought I might get lucky.

You ever get lucky?
Occasionally, but most of the time, no.  I ended up getting hurt more often than getting the trick.

What music do you listen to when you wake up?
Depends on my mood. I was listening to Woody Guthrie a lot, because I started reading this book called “Proud To Be An Okie.” It got me super psyched on Woody. It’s got a lot of history on Oklahoma, like the Dust Bowl movement from Oklahoma to California. Just recently I went to a Creators show, so I’ve been listing to them a bunch now. I’ll get psyched on a certain band and listen to them all day. Then I get tired of it and listen to something else.

Explain why Gerwer is your life coach.
He’s always giving me good advice and steering me in the right direction. He always tells me, “Don’t do what I do, do what I say.”  I kind of use him as an example, like, “OK,  if I do that, this is what’s going to happen.”

So you use him as an example of  how not to live.
Yeah. That’s his main advice in being  a life coach. 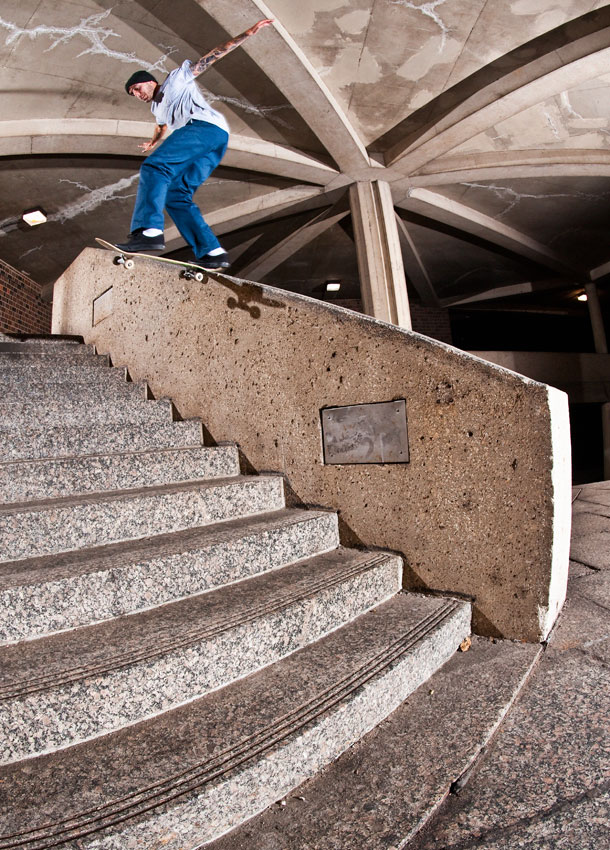 “I had third-degree burns... because the ramps were so hot”

How do you feel about this whole health care reform thing? I know you had lots of trouble getting health insurance.
It’s good to set regulations on that stuff, because honestly, even if you have health insurance, they always find a way not to pay. They find a way to weasel their way out of it and you end up having to pay for it. Someone like myself, I have a pre-existing condition from childhood—nothing that I could help. It’s not like I purposely went out and got something. It was just something I had. It’s pretty messed up that people who need health insurance can’t get it.

You don’t drink that much because  of your “pre-existing condition,” right?
When I drink a lot and party, that’s when the seizures start coming back. I was drinking a lot for a while when I first came out here, and they started slowly coming back more and more often. It’s just not worth it to wake up and have to worry about it. Like, “Oh shit, am I going to have a seizure? Where am I going to be when it happens?” I started having them in weird places, too—like, I’d be out skating and have one, and I’d bust my chin open because of it. I figured out that when I don’t drink that much and I take care of myself, I feel better, and I don’t have to worry about being on the medication. And I’d rather not be on medication if I can control it.

Why no more reefer?
It was getting to the point where I was spending a lot of money on it. I just don’t like being reliant on something. We’d go on a trip, and that was the main thing we’d worry about until we got it. Nothing wrong with it; sometimes I smoke still if it’s around. I just made a commitment not to buy it anymore, because we were spending a bunch of money on it and it was just making it harder to get out and do stuff; harder to get motivated. I just figured I’m better off not doing it all the time. Save money and get more done.

How many times have you burned yourself cooking bacon?
Just that one time. Second-degree burns on my hands from the grease. Had to go to the hospital.

Do you make Josie cook it for you now?
Yeah. She won’t let me cook breakfast anymore. 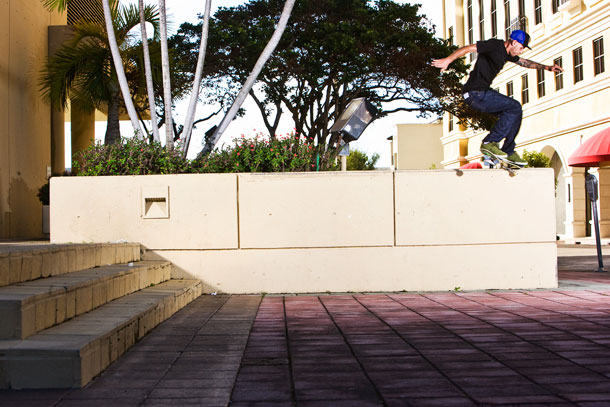 You started getting tattoos to cover up burns, right? How did you get burned in the first place?
That’s why I got the sleeve on my left arm.  I had some burn scars from when I was pretty young, maybe 15, still living in Oklahoma. I was at this outdoor metal skatepark in Arkansas—I was excited the night before because we were going to a skatepark, so  I didn’t sleep very much. We got out there the next day and it was super hot. I was skating around and had a seizure on the top of this bank ramp. I fell on my arm and face, slid down the ramp, and just laid at the bottom. The ramps were super hot. Everyone was freaked out and didn’t want to move me until the ambulance got there, but by the time they did I had third-degree burns on my arm and some on the side of my face because the ramps were so hot.

When you walk into a church, does your chest burn a little? Not like bursting into flames or anything, but more like an itching burn or slight discomfort? Kind of like athlete’s foot of the chest, maybe?
No. If that happened, it would kind of prove that it was all real, right?