A rather grim reggae lyric once proclaimed: “There’s six million ways to die—choose one.” Well, there’s even more ways than that in which you can annihilate yourself on a skateboard. In fact, you don’t have to choose. The trauma lottery never sleeps, and it’s waiting for you the moment you step on the grip. From curbs to waist-high rails, or from flatground to hill bombs, each slam is unique and it’s only a matter of time until this blood debt needs to be reckoned. And whether you’re supernaturally talented or staring down your first drop-in: Everyone pays. The skate/slam covenant is so assured it makes you wonder if there’s dark forces at work, beyond the naked eye, maintaining the sacred oath. Perhaps these invisible entities, Slam Demons if you will, operate something like this... 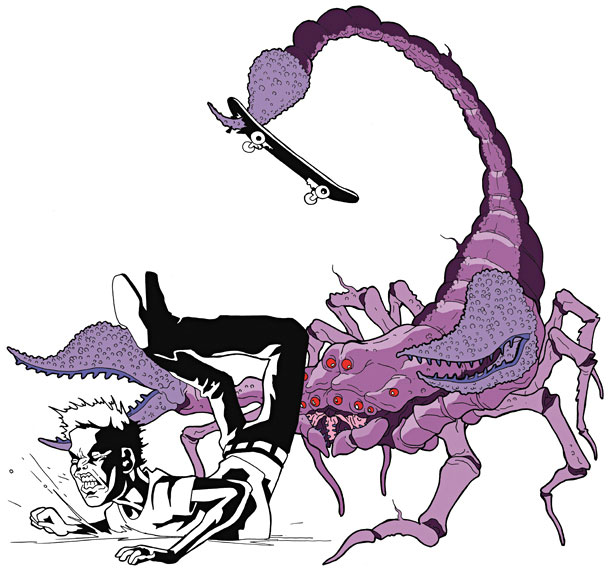 It’s usually skaters’ arms and legs that get decimated daily. So, when a full-on chest blitz goes down, the first reaction is surprise. Then, the inability to breathe oxygen and sustain life (namely, your own) becomes an urgent concern. Meanwhile, your friends already posted the footage online and it's a hit on Facebark. The clip went viral and so will your staph infection. 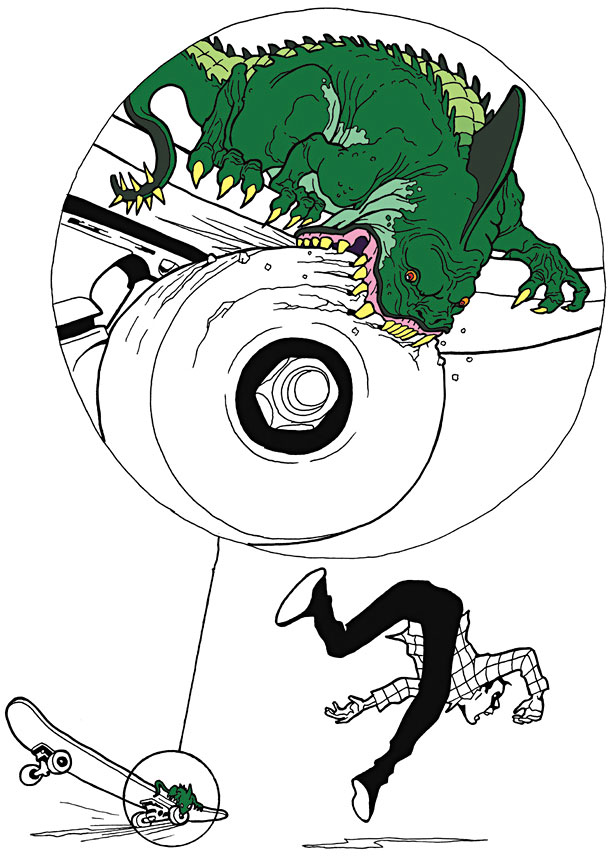 What happens when an unstoppable force meets an immovable object? You can ponder this paradox as you scrape both your palms off the ground, but basically it's "Murder, She Wrote." Wheelbite can be caused by loose trucks, a rock, or a crack. But sometimes it’s the fangs of a spiteful beast who just wanted to see you take a dive, dude. 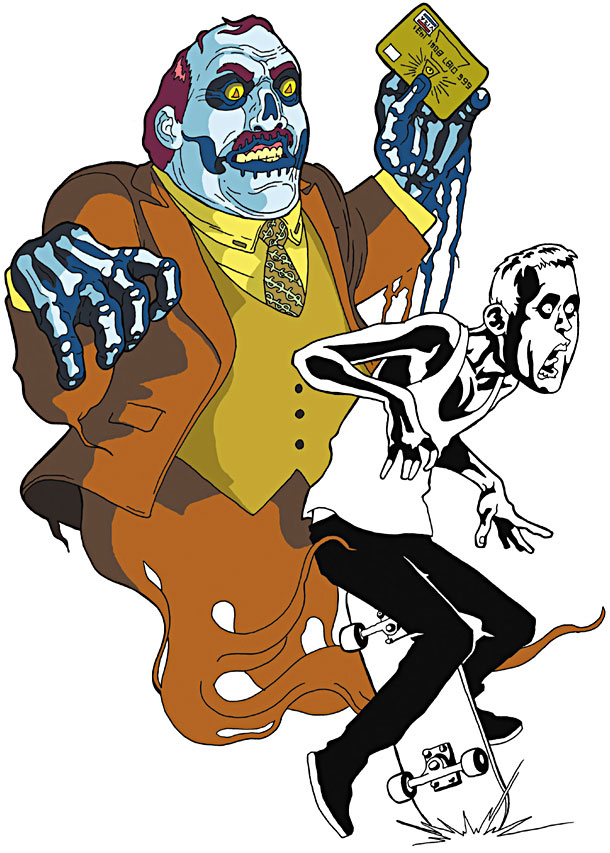 Forget high interest rates, this slam has the most cruel payment plan of all. An out-of-control board, by way of rocket flip or some other mishap, can quickly become a vertical junk-crusher. For our friends 5’ 6” and under, this one can be pure testicular brutality. 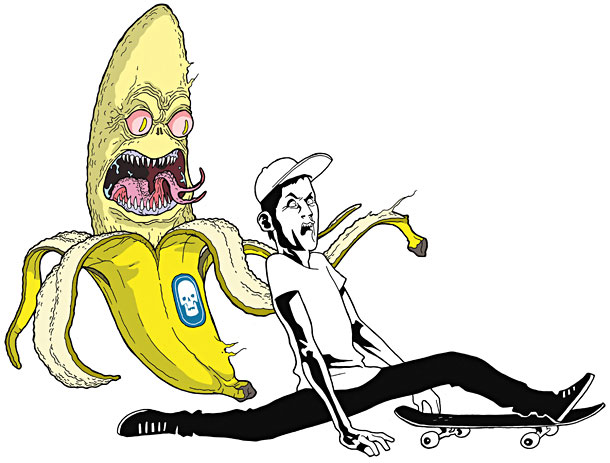 Good griptape you don’t even think about. It keeps you on board when the going gets rough, and when you need to eject, she’ll let you go. Yet, that which giveth can taketh away, and a one-foot-on/one-foot-off slam you won’t soon forget. Rarely seen outside of gymnastics or the dancefloor, the splits will end any session. You can also call it the James Brown or the Van Damme. 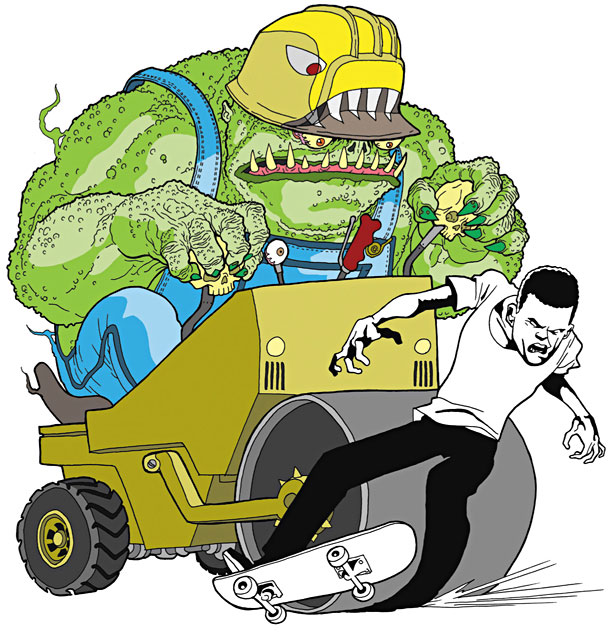 Tendons and ligaments don’t ask for much. They just request that you stay within a normal range of motion. When a demonic steamroller parks on top of your foot at an unnatural angle, it’s a deal breaker. You and your ankle will not be on speaking (or walking) terms for several weeks. 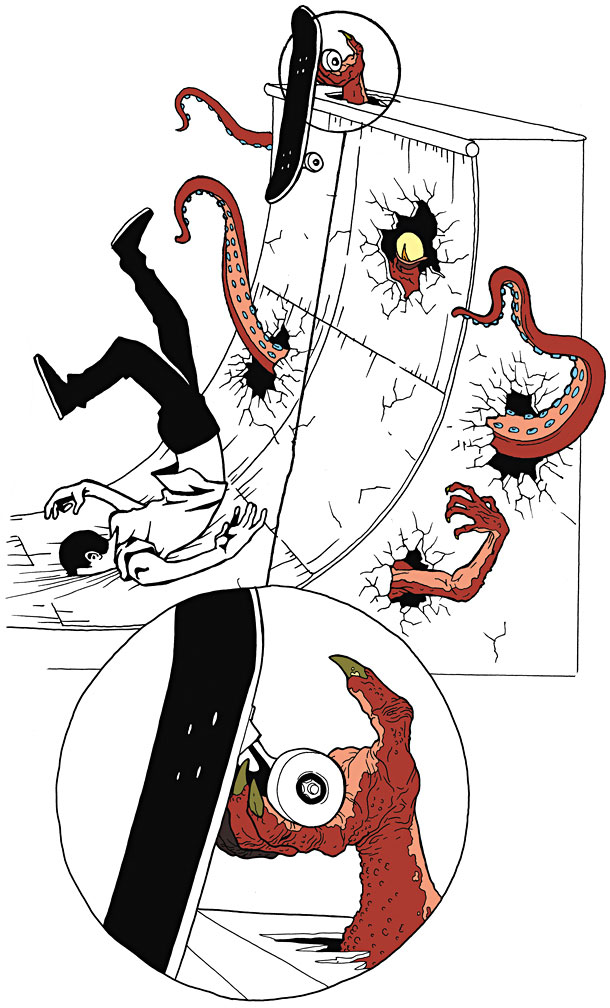 Transitions are a blast. Experiencing them on your face? Not so much. When your board gets hi-jacked by the coping, just remember the Transition Gods require a human sacrifice. It's nothing personal. And don’t worry, you won’t feel a thing...until you hit the flatbottom. Hey, it’s why the trick is called a disaster. 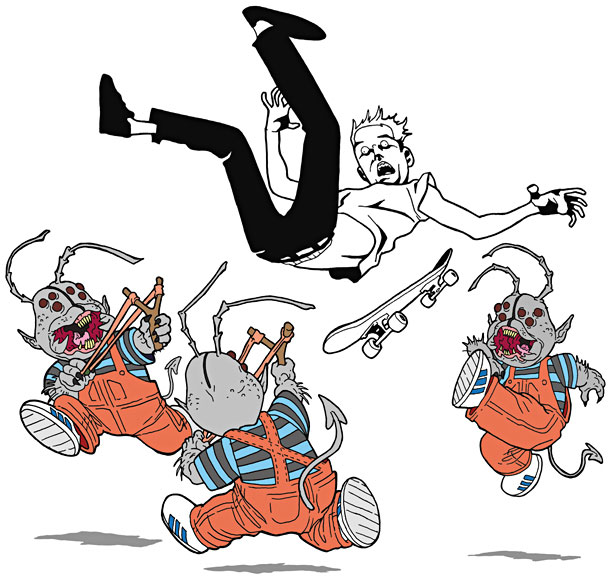 Dennis the Menace was the comic-strip character whose ill-placed skateboard would often send his neighbor, Mr. Wilson, spilling onto the ground, ass-first. Don’t get it twisted, though. This charming heels-over-head comic scenario never included the snapped tailbone and severe thigh hemorrhage that an actual slam-dance can serve up. 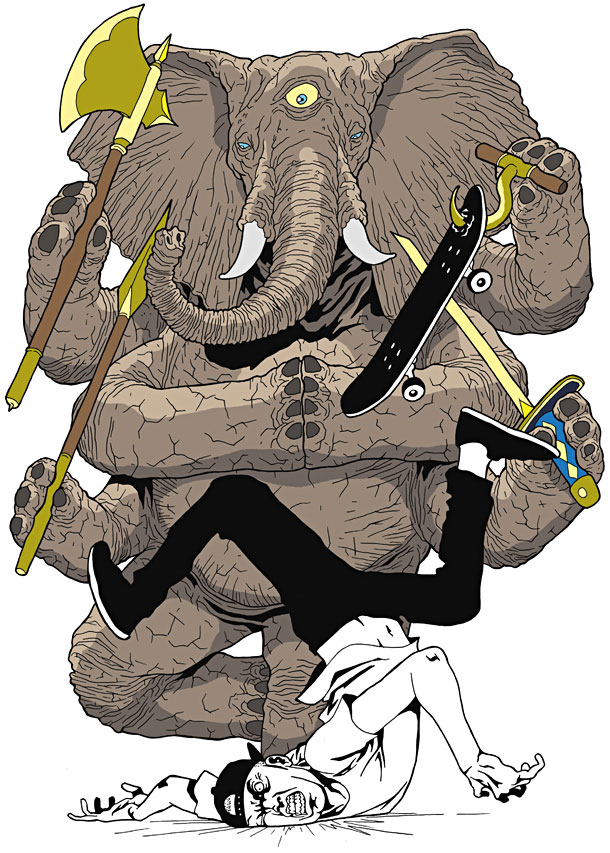 Yoga is supposed to be tranquil and meditative, but this monster mash distributes your weight to where you can least support it: Your goddamn neck. This can be the jolt-of-a-lifetime and you’re lucky if you live to tell. When it comes to Slam Demons, there’s no escape. So as you await their arrival, do a rolling tumble when you can, get those arms out if you can’t, and happy skating...