The Regrouping of the Sovereign Sect

The Regrouping of the Sovereign Sect
Alien Workshop in America

Check out the Alien Workshop tour article from our September issue. Fatback Productions is coming through with an edit tomorrow. Click any spread to enlarge. 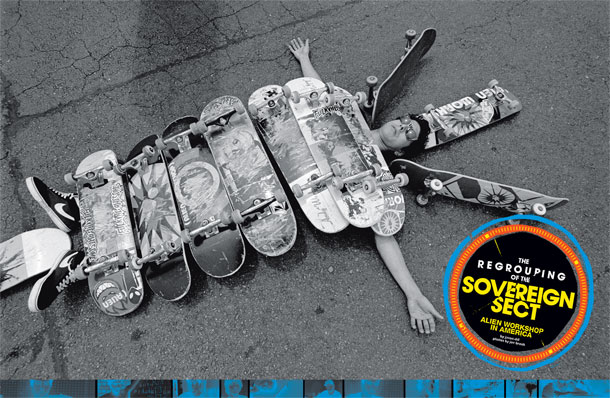 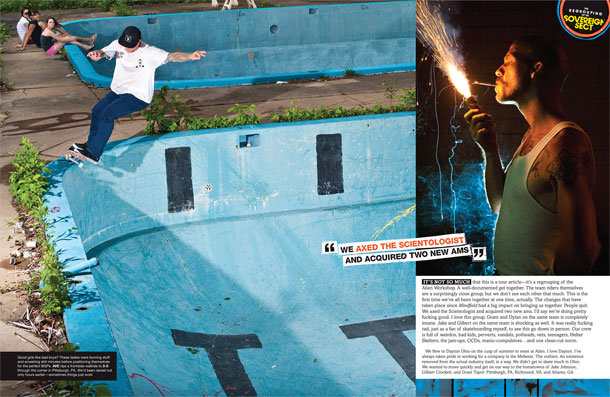 It’s not so much that this is a tour article—it’s a regrouping of the  Alien Workshop. A well-documented get together. The team riders themselves are a surprisingly close group, but we don’t see each other that much. This is the first time we’ve all been together at one time, actually. The changes that have taken place since Mindfield had a big impact on bringing us together. People quit. We axed the Scientologist and acquired two new ams. I’d say we’re doing pretty fucking good. I love this group. Grant and Dylan on the same team is completely insane. Jake and Gilbert on the same team is shocking as well. It was really fucking rad, just as a fan of skateboarding myself, to see this go down in person. Our crew is full of weirdos, bad kids, perverts, vandals, potheads, vets, teenagers, Helter Skelters, the jam-ups, OCDs, manic-compulsives…and one clean-cut norm.

We flew to Dayton Ohio on the cusp of summer to meet at Alien. I love Dayton. I’ve always taken pride in working for a company in the Midwest. The outliers. An existence removed from the actual industry itself, in a way. We didn’t get to skate much in Ohio.  We wanted to move quickly and get on our way to the hometowns of Jake Johnson,  Gilbert Crockett, and Grant Tayor: Pittsburgh, PA; Richmond, VA; and Atlanta, GA. 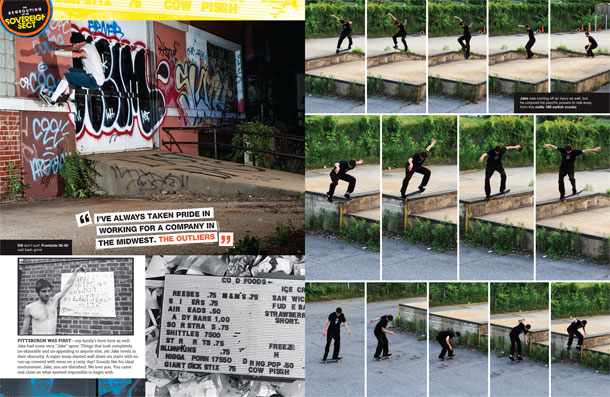 Pittsburgh was first—my family’s from here as well. Jake had some very “Jake” spots: Things that look completely un-skateable and un-appealing to anyone else, yet Jake revels in their obscurity. A super steep slanted wall down six stairs with no run-up covered with moss on a rainy day? Sounds like his ideal environment. Jake, you are disturbed. We love you. You came real close on what seemed impossible to begin with. 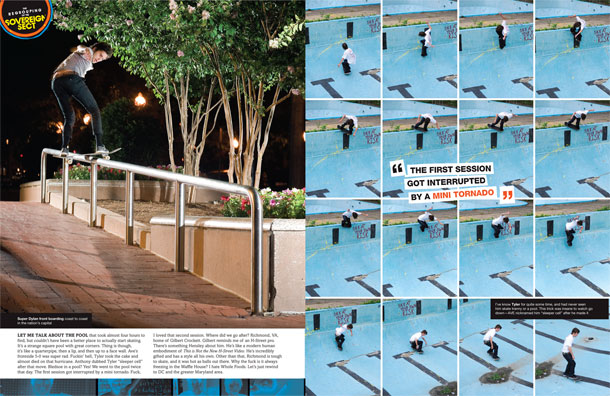 Let me talk about the pool that took almost four hours to find, but couldn’t have been a better place to actually start skating. It’s a strange square pool with great corners. Thing is though, it’s like a quarterpipe, then a lip, and then up to a face wall. Ave’s frontside 5-0 was super rad. Fuckin’ hell, Tyler took the cake and almost died on that hurricane. Anthony dubbed Tyler “sleeper cell” after that move. Bledsoe in a pool? Yes! We went to the pool twice that day. The first session got interrupted by a mini tornado. Fuck, I loved that second session. Where did we go after? Richmond, VA, home of Gilbert Crockett. Gilbert reminds me of an H-Street pro. There’s something Hensley about him. He’s like a modern human embodiment of This is Not the New H-Street Video. He’s incredibly gifted and has a style all his own. Other than that, Richmond is tough to skate, and it was hot as balls out there. Why the fuck is it always freezing in the Waffle House? I hate Whole Foods. Let’s just rewind to DC and the greater Maryland area. 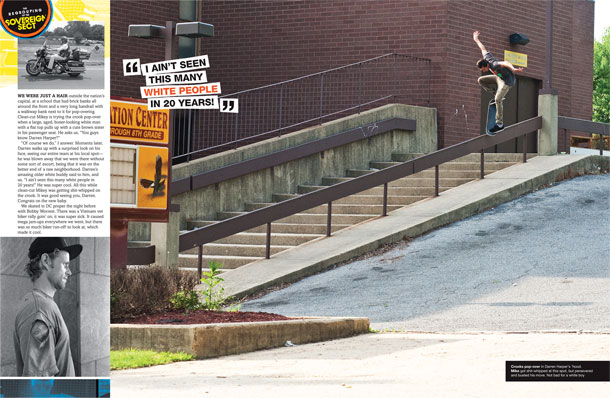 We were just a hair outside the nation’s capital, at a school that had brick banks all around the front and a very long handrail with a walkway bank next to it for pop-overing. Clean-cut Mikey is trying the crook pop-over when a large, aged, boxer-looking white man with a flat top pulls up with a cute brown sister in his passenger seat. He asks us, “You guys know Darren Harper?”

“Of course we do,” I answer. Moments later, Darren walks up with a surprised look on his face, seeing our entire team at his local spot—he was blown away that we were there without some sort of escort, being that it was on the better end of a raw neighborhood. Darren’s amazing older white buddy said to him, and us, “I ain’t seen this many white people in 20 years!” He was super cool. All this while clean-cut Mikey was getting shit-whipped on the crook. It was good seeing you, Darren. Congrats on the new baby.

We skated in DC proper the night before with Bobby Worrest. There was a Vietnam vet biker rally goin’ on; it was super sick. It caused mega jam-ups everywhere we went, but there was so much biker run-off to look at, which made it cool. 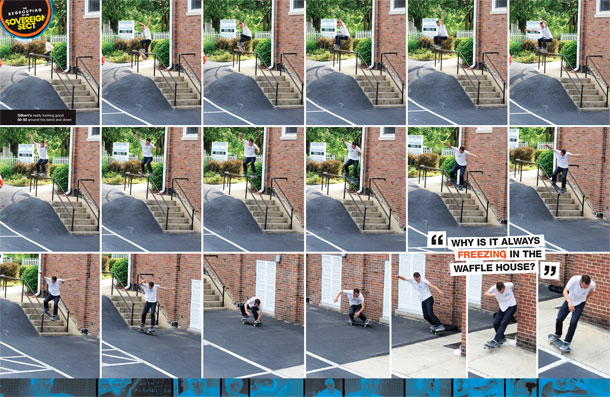 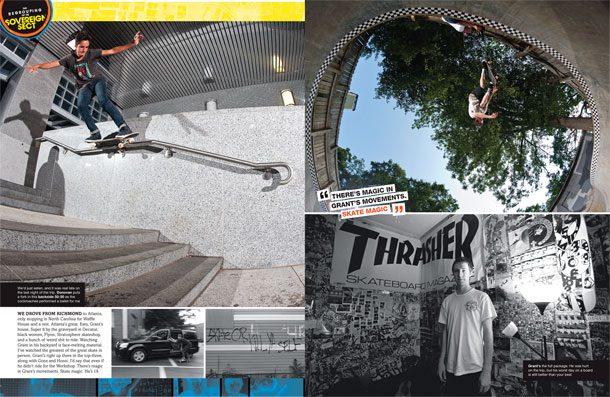 We drove from Richmond to Atlanta, only stopping in North Carolina for Waffle House and a rest. Atlanta’s great. Eats, Grant’s house, Super 8 by the graveyard in Decatur, black women, Flynn, Stratosphere skateshop, and a bunch of weird shit to ride. Watching Grant in his backyard is face-melting material. I’ve watched the greatest of the great skate in person. Grant’s right up there in the top-three, along with Gonz and Hosoi. I’d say that even if he didn’t ride for the Workshop. There’s magic in Grant’s movements. Skate magic. He’s 19. 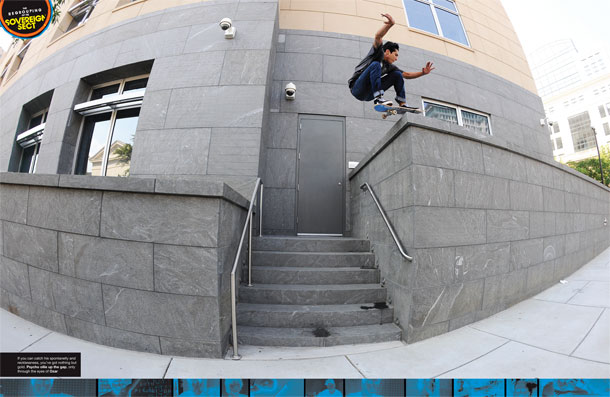 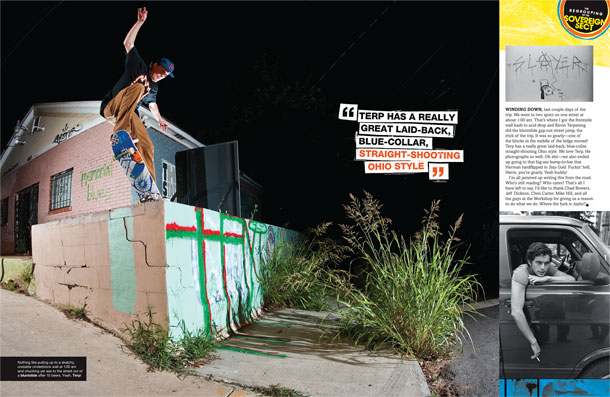 Winding down, last couple days of the trip. We went to two spots on one street at about 1:00 am. That’s where I got the frontside wall bash to acid drop and Kevin Terpening did the bluntslide gap-out street jump, the trick of the trip. It was so gnarly—one of the blocks in the middle of the ledge moved! Terp has a really great laid-back, blue-collar, straight-shooting Ohio style. We love Terp. He photographs so well. Oh shit—we also ended up going to that big-ass bump-to-bar that Herman hardflipped in Stay Gold. Fuckin’ hell, Herm, you’re gnarly. Yeah buddy!

I’m all jammed up writing this from the road. Who’s still reading? Who cares? That’s all I have left to say. I’d like to thank Chad Bowers, Jeff Dickson, Chris Carter, Mike Hill, and all the guys at the Workshop for giving us a reason to do what we do. Where the fuck is Jaybo?
© 1981–2023 High Speed Productions, Inc.